Sergey Karjakin in the 50th anniversary of Earth vs Space match

On June 9, a chess match between Space and Earth is scheduled to take place in the main hall of the Moscow Museum of Cosmonautics. The match is timed precisely to the half-century anniversary of the first Space – Earth game of chess played on June 9, 1970. The match features pilot-cosmonaut Anatoly Ivanishin, hero of the Russian Federation, and cosmonaut Ivan Wagner, who will deliver the battle from aboard the International Space Station. "Representative of the Earth" is Sergey Karjakin – a rapid and blitz world champion, world championship challenger and two-time winner of the World Team Championship as a member of the Russian national team. 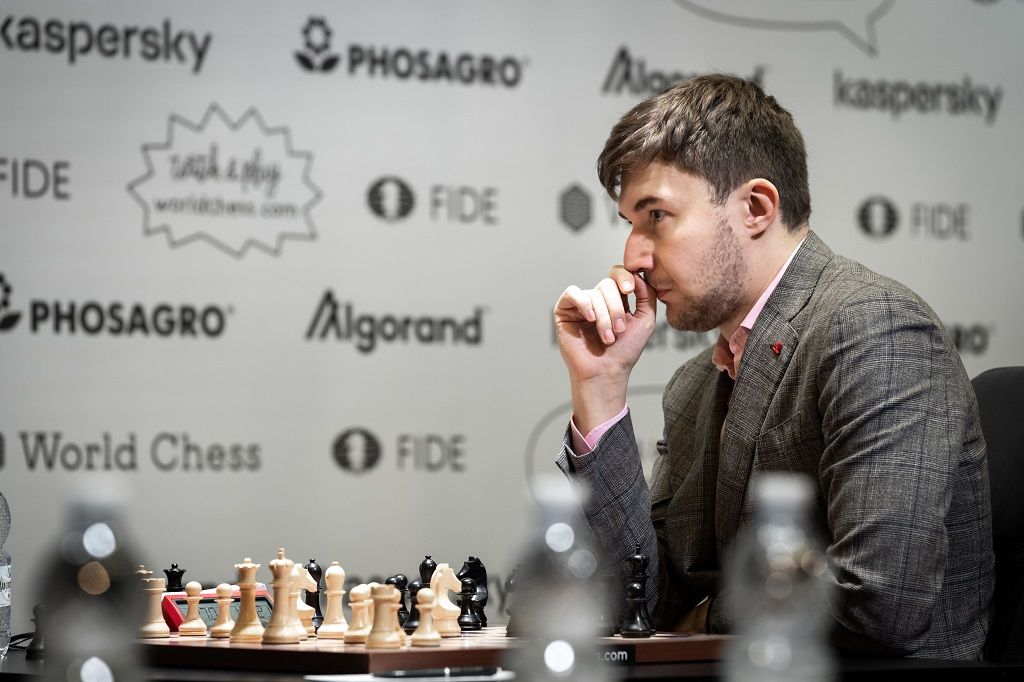 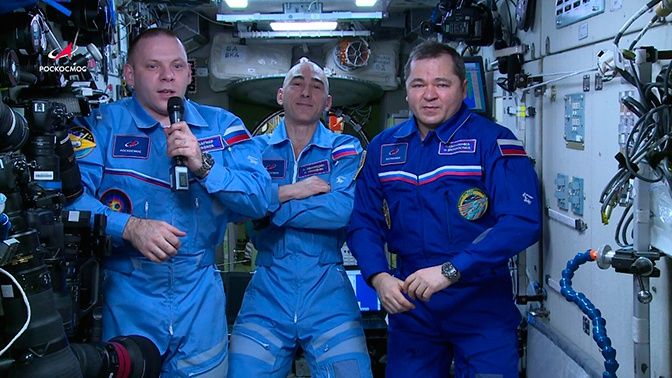 The first ever Space – Earth game was played on June 9, 1970, between the cosmonauts in flight and "representatives of the Earth.” Space was represented by the crew of Soviet spacecraft Soyuz-9 consisting of pilot-cosmonauts Andriyan Grigoryevich Nikolaev and Vitaly Ivanovich Sevastyanov. Earth representatives featured the head of the Soviet cosmonauts training center, Colonel-General of Aviation Nikolai Petrovich Kamanin, and pilot-cosmonaut Viktor Gorbatko. Pilot-cosmonaut Valery Fedorovich Bykovsky was in charge of the game coverage. 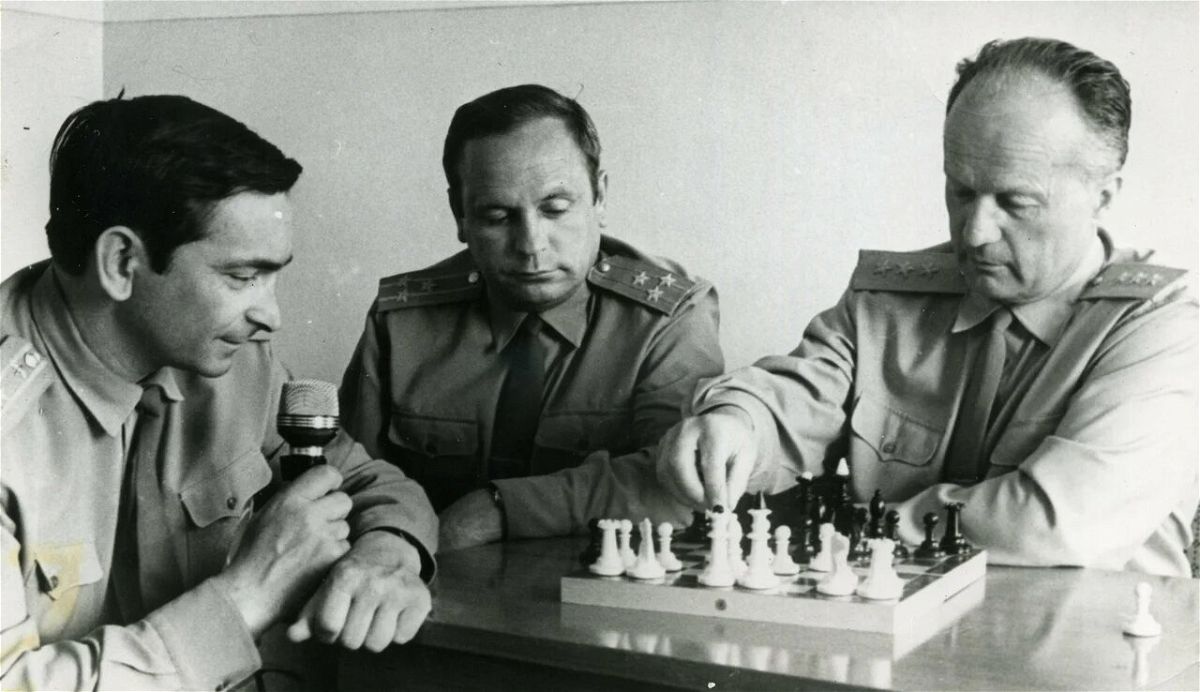 The players on earth:  Colonel-General of Aviation Nikolai Petrovich Kamanin, and pilot-cosmonaut Viktor Gorbatko. Pilot-cosmonaut Valery Fedorovich Bykovsky was in charge of the game coverage.

A rare photo of Vitaliy Sevastyanov playing from space

The game was taking place when the crew had a rest day and lasted about 6 hours. Communication was maintained over the radio. The moves were timed to when the ship would fly over the USSR territory. Space had the white pieces. A unique chess set designed for zero gravity conditions was used for that game. The space chess designer was Mikhail Ivanovich Klevtsov – a young engineer, candidate of biological sciences, and employee of the Institute of Aviation and Space Medicine. Any magnet designs were ruled out because of sensitive instruments, but Klevtsov came up with a simple and original system of notches and grooves. This unique set is currently at the display with the Chess Museum of the Chess Federation of Russia. 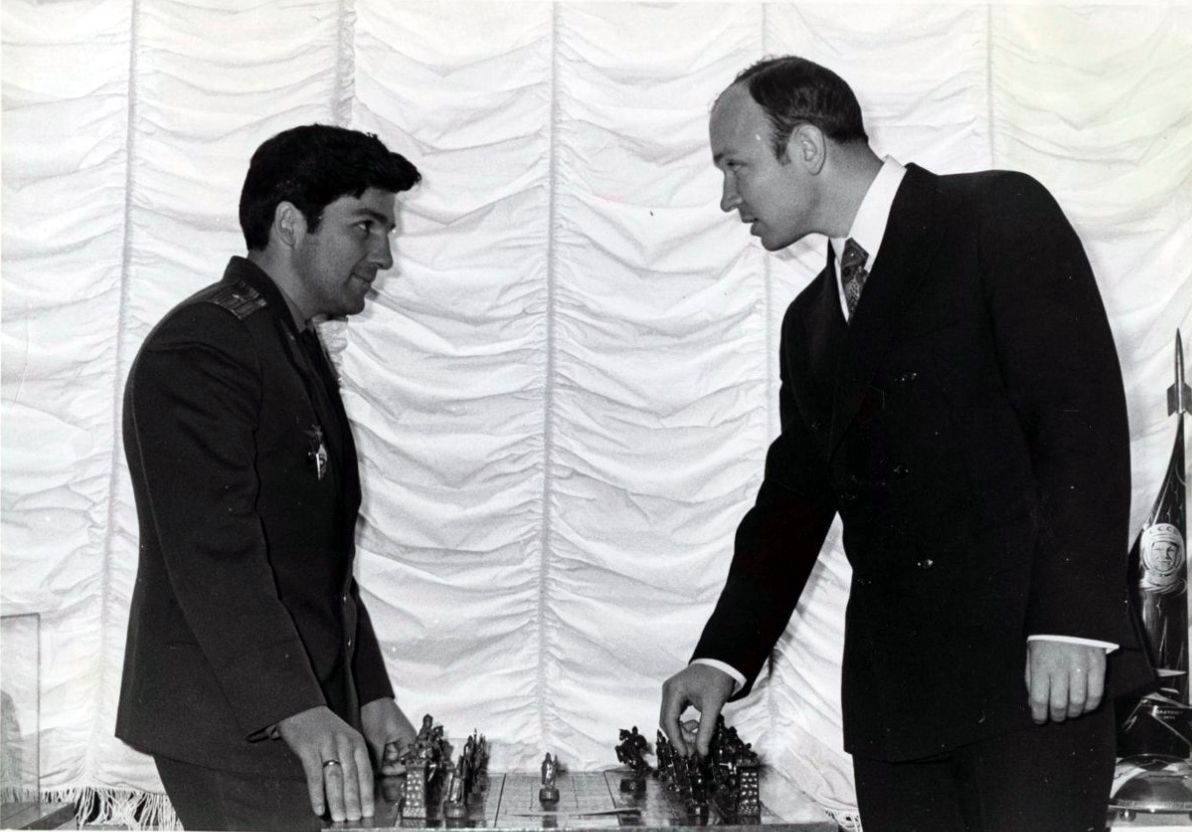 Live streaming in the Russian and English languages is co-organized by the Chess Federation of Russia, the Roscosmos State Corporation, and the Moscow Museum of Cosmonautics. Social network VKontakte, the official online partner, is a platform that provides the event coverage for spectators. Same as 50 years ago, the first move advantage belongs to the space crew. The broadcast starts at 11:45 a.m MSK.

The organizations involved in setting up this event:

Chess Federation of Russia (CFR) (from 1992 till 2019, known as the Russian Chess Federation) is an All-Russian non-governmental organization uniting regional chess federations as well as being a member of the International Chess Federation (FIDE). The CFR charter recognizes the Federation congress as the supreme governing body to beconvened at least once every four years. Besides, the collegiate governing body is theFederation's Supervisory Board, which consists of five vice presidents and 26 representatives ofregional federations. Since 2014, the sole executive authority has been vested with President ofthe Russian Chess Federation (since 2019, the Russian Federation of Chess). Andrey Filatov isthe CFR's current President.The CFR is a direct organizer of many national and international tournaments, including theRussian Championship Higher League, Russian Team Championship, and the internationalcompetition Belaya Ladya. The CFR also hosts the Russian Rapid and Blitz Championships, theRussian Cup, the Grand Prix Rapid, and the Children's Russian Cup.

The Museum of Cosmonautics is one of the largest scientific and technical museums in Russia.  The history of the museum starts in 1964, when the Monument to the Conquerors of Space first appeared on the map of Moscow. Today, the Museum of Cosmonautics is one of the top three most visited museums in Moscow's Department of Culture. The modern museum exposition is composed of eight exhibition halls. The museum's collection includes more than 99,000 items: samples of rocket and aerospace technology, authentic relics, documents, philately, numismatics, decorative and applied works of art, and collections of paintings and graphics. The museum tells the stories of the conquerors of space.  Among them: the famous Belka and Strelka, authentic descent vehicles from Soyuz spacecraft, a model of the first artificial satellite "Sputnik," the original Lunokhod control panel, a full-scale model of the base module of the "Mir" space station, and other space artifacts.

ROSCOSMOS is a State Corporation established in August 2015 to oversee and implement a comprehensive reform of the Russian space industry. State Space Corporation ROSCOSMOS ensures implementation of the Russian government's space program and its legal regulation. ROSCOSMOS also places orders for the development, manufacture and supply of space equipment and space infrastructure objects. The state corporation is also responsible for international space cooperation and tasked with setting the stage for the future use of results of space activities in Russia's social and economic development.