The longest chess tournament in history - FIDE Candidates 2020 is finally over. The winner of the event and new Challenger for the World Championship lost his final round game against Ding Liren who finished the tournament with a hat-trick of wins. Vachier-Lagrave beat Hao Wang to finish sole second with 8.0/14. Anish Giri suffered a loss against Kirilll Alekseenko and he was placed third 7.5/14. Caruana made a draw with Grischuk, they finished with a score of 7.5/14 and 7.0/14 respectively. Hao Wang decided to retire from Professional Chess but he is open to coaching, friendly matches and some shows. Photo: Lennart Ootes/FIDE

FIDE Candidates 2020 already got it's winner on the penultimate round but the last day was not short of action. While Ding Liren got his redemption by completing his hat-trick of wins with a victory over the Challenger to the World Championship - Ian Nepomniachtchi, his compatriot also had a hat-trick but of losses. At the post-match interview, Hao Wang announced his retirement from Professional Chess, citing personal health reasons. Wild Card entrant and youngest participant of the event, Kirill Alekseenko also got his redemption by scoring his second victory of the event against the in-form Anish Giri. Thus he avoided a last place finish.

"Actually yesterday I was very motivated but today when I woke up, I felt like my motivation significantly went down. So I wasn't very happy that I have one more game to play. I prepared quite a lot for this game." - Nepomniachtchi on difficult it was to have motivation to play the last round after reaching his goal. 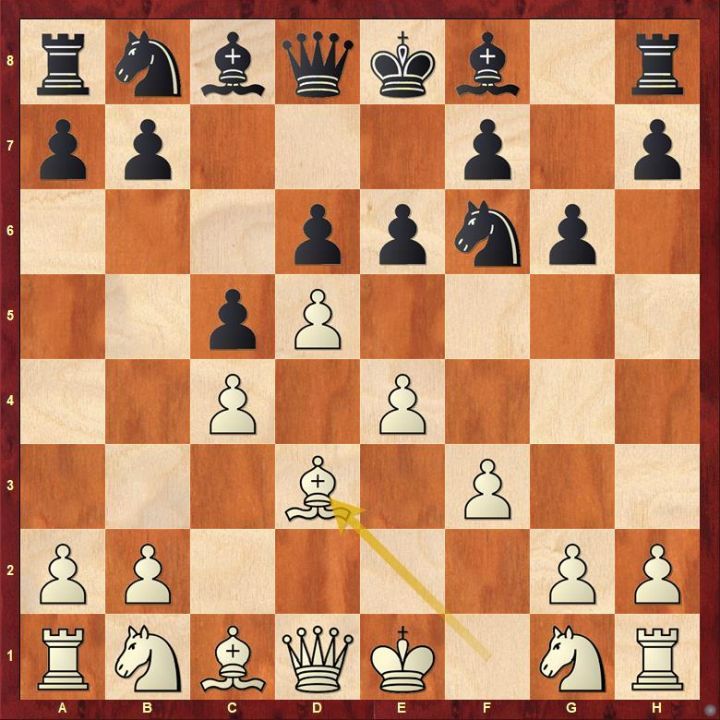 "6.Bd3 is not used to be main move here. It's normally 6.Nc3/Ne2, this is really cunning. So if I take on d5 then somehow white takes with c-pawn, the b1-knight goes to c4. This is like the best setup white can aim for. I felt like maybe it was just a déjà vu, I felt like I had something big this region. So I was very optimistic here. 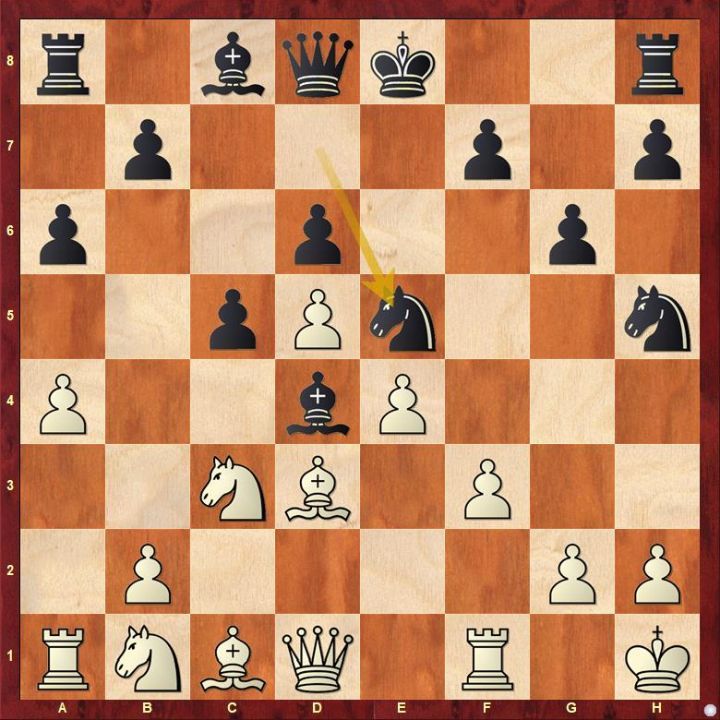 "...This was a very dangerous position for white... This was a very critical moment. 13.Ne2 Qh4 14.Nxd4. Here black has three choices, 14...Ng3, Nxd3 and cxd4. Obviously if I had known this feeling that I had looking at this line... I calculated of course Nc2 Nxh2, I thought this endgame is okay then I play f5 in the end, it's quite tricky but maybe it appears from slightly different line. That's the minus of too much knowledge. 14...cxd4 is absolutely healthy and after 15.Kg1, in the worst case I can go for g5, Nf4/g4. I can also go for 0-0 and f5 and I think it should be more or less decent. That's surely fine for black. I was probably led away by some false knowledge." - Nepomniachtchi discussing the critical moment of the game. 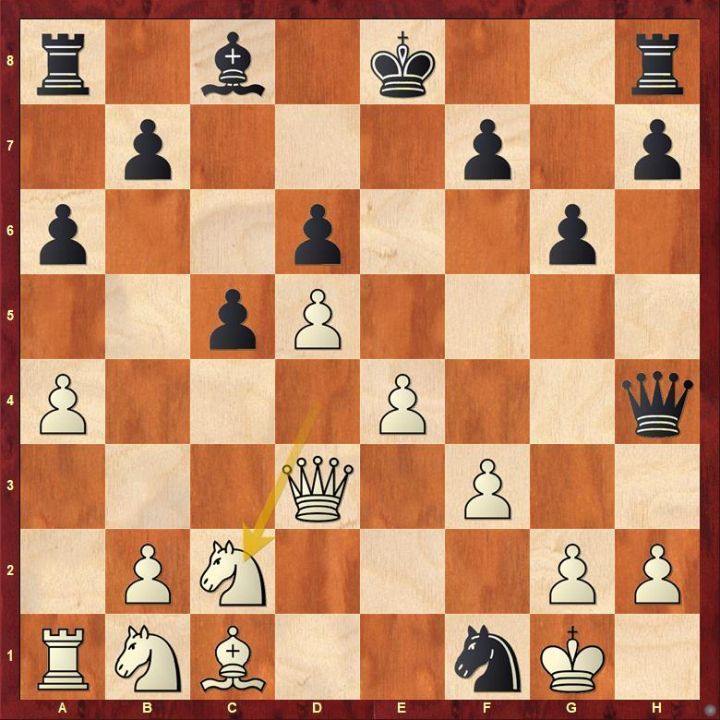 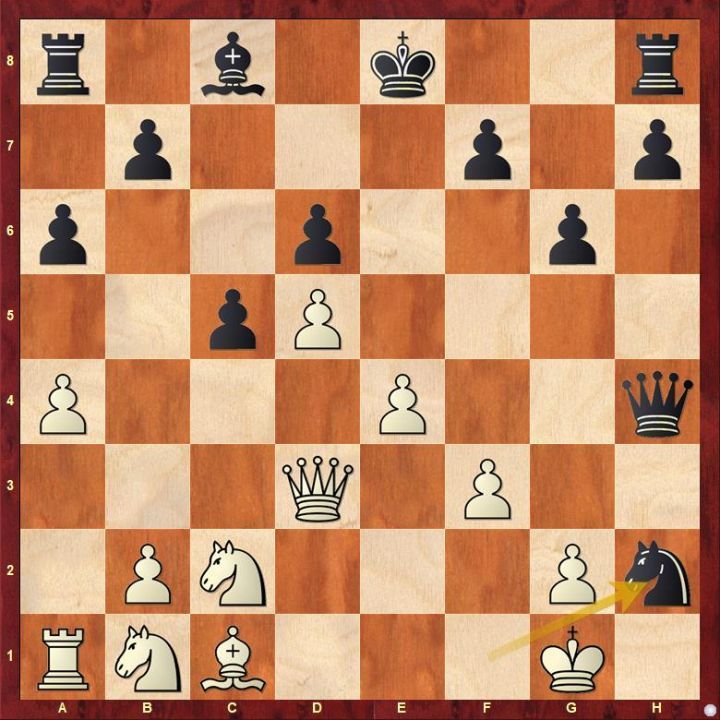 "Ian has a very different style than Magnus. It depends on if he can get the position he likes and Magnus doesn't like. It will be fight of the different kind of style." - Ding Liren on Nepomniachtchi's chances against Carlsen.

"It was a Berlin endgame. It had a lot of finesses. When I managed to get my knight to d6 and challenged, my position was not that I was winning but very difficult to find out how to defend." Vachier-Lagrave on his game against Hao. 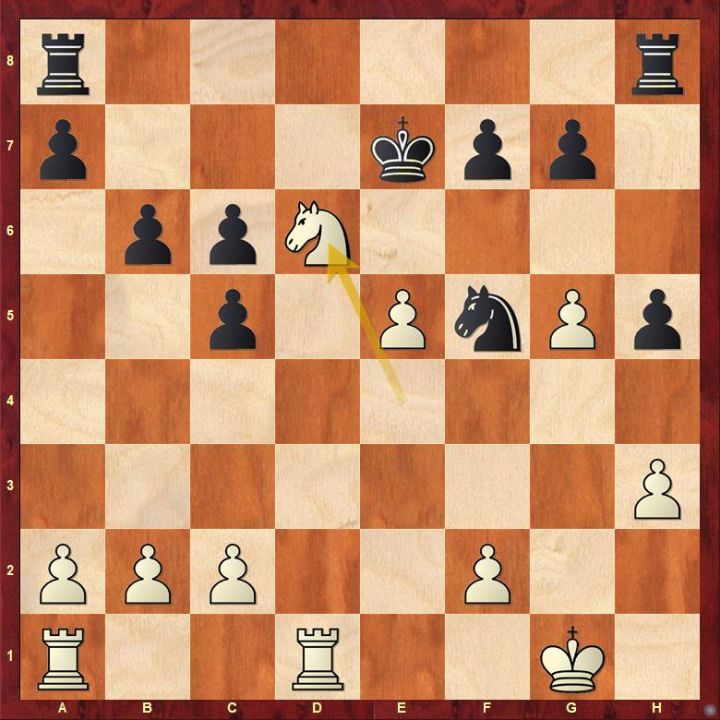 "I remember that the position after knight on d6 is still equal according to computer. There is some play for black for such moves, I think white couldn't make progress during my analysis. During the game, I couldn't remember and I played badly and lost easily." - Hao on the final mistake in the game.

"My idea was to win the event and only first prize matters, so it's not a great result. I am still proud of the way I fought back after I had a lot of very difficult games, lot of very difficult losses. I also take the positives, I ought to be able to capitalize on the work I did prior to the event. On the confidence, I at least partly restored with the last few games. Of course there would be a lot of time to reflect on what worked, what didn't work with my whole team." - Vachier-Lagrave on his tournament result assessment.

"I probably will try to do something else... I have some health issues, I just don't think that I can continue this profession. I will do coaching, investment, but I don't think I can do anything which have too much stress. I will do friendly matches or some shows but yes from professional chess, yes completely." - when asked about if he is retiring from professional chess. He also added, "I have this digestion issues which were hidden probably for some years. It was very difficult. These things started to get worse since 2019. Back then the doctor said that I had to get checked every year. I didn't feel it that much then. After the game against Grischuk, I wanted to quit the tournament because I already saw that I couldn't continue but okay it doesn't matter." 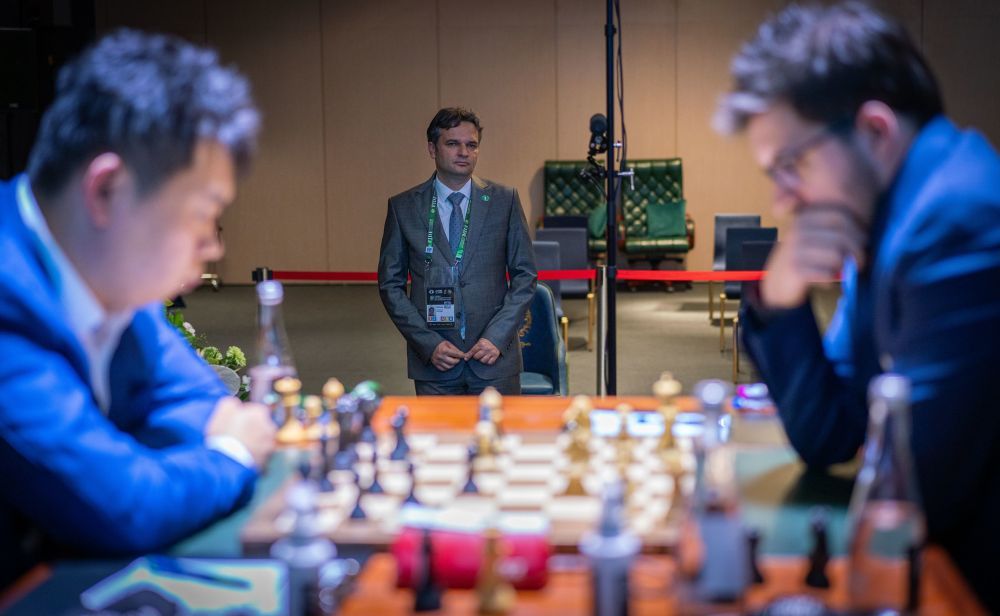 "It was an unpleasant game. In the opening I didn't get very much but I didn't think I am ever losing such a position. At some point it got a little little bit unpleasant but okay I thought I have seen worse, I should be able to handle it but it remained a little unpleasant and when I thought I already did it in Queen and Knight endgame then he found 37...Qc7. 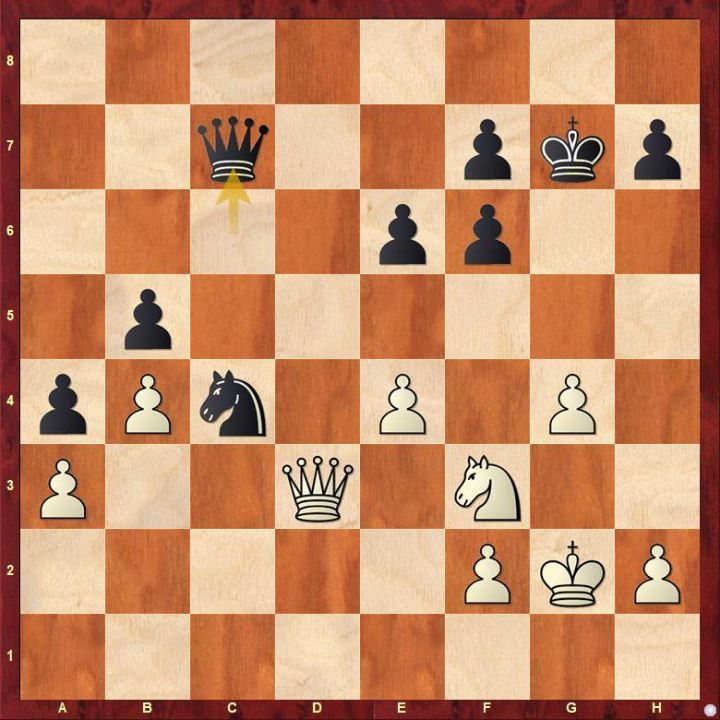 The game continued then I missed few things. Then again I thought I am fine. I never quite saw a full quality and in the end I miscalculated at crucial moment but it was already very very tough. I think I was okay. He told me that I could at some point tried to trade queens and I thought that that was a very bad Knight endgame but it's actually maybe holding. Yeah I just miscalculated. It was actually really hard at that point. It's just very difficult, such positions you have to calculate so much. The reason why I am talking about it is that I see there is not so much time left and in time pressure it's very hard so at some point you got to accelerate. Yeah it was just very difficult to be honest. It's just a very difficult game and I think he played very very well. It was also incredible to see his evolution of his Catalan handling in just a week, from losing in 20 moves to outplaying me so impressively, I thought that it's remarkable." - Giri on his final round game against Alekseenko.

"Actually at some point I wanted to share first place already. I thought it's going to be better than nothing and but at that point when I saw Ian was in trouble, I didn't really see how I am gonna push but I was still hoping somewhere I will take over. In the end of course, I think one of the reasons I did try very hard today because yesterday I felt the way I feel after tournaments. It wasn't over yet but I felt that way and I couldn't do anything about it. It's very often when you keep the tension for very long then your body relaxes, I felt that my body is relaxing but I was saying, come on we have to play one more game but the body was relaxing and I still tried today to play ambitiously. It was again a combination of few things. He just played also really well to be honest. I could lose a game like that on any day. It's just a very good game by him I think." - Giri added more.

Giri lost to Alekseenko in the final round | Photo: Lennart Ootes / FIDE

"It was an interesting game. I got like slightly better position somewhere in the middlegame. Step by step I was trying to gain my advantage but it was very very close to the equal. I think Anish made quite strange move 37.g4. After that the f4-square became very weak and my knight could transpose from g6 to it. It created me some queening chances. After the time control, it looked very very prospective position and I was lucky to not blunder as yesterday and to finish the game on a high level." - Alekseenko on his final game of the tournament.

"After the time control, I was getting a bit of optimistic, before I thought okay it was equal for a long time. I didn't really expect anything to come of it. After time control... it looked pretty dangerous but I wasn't sure if it was anything real or just a bit tricky for black." - Caruana on the his final round game.

"I think it's my best result ever in this Round-Robin Candidates. I think I always finished in minus before but okay nothing special." - Grischuk on his performance at the event. "I don't think it matters whether you are +3 or -3 if you don't win the event." - Caruana's assessment on his performance. 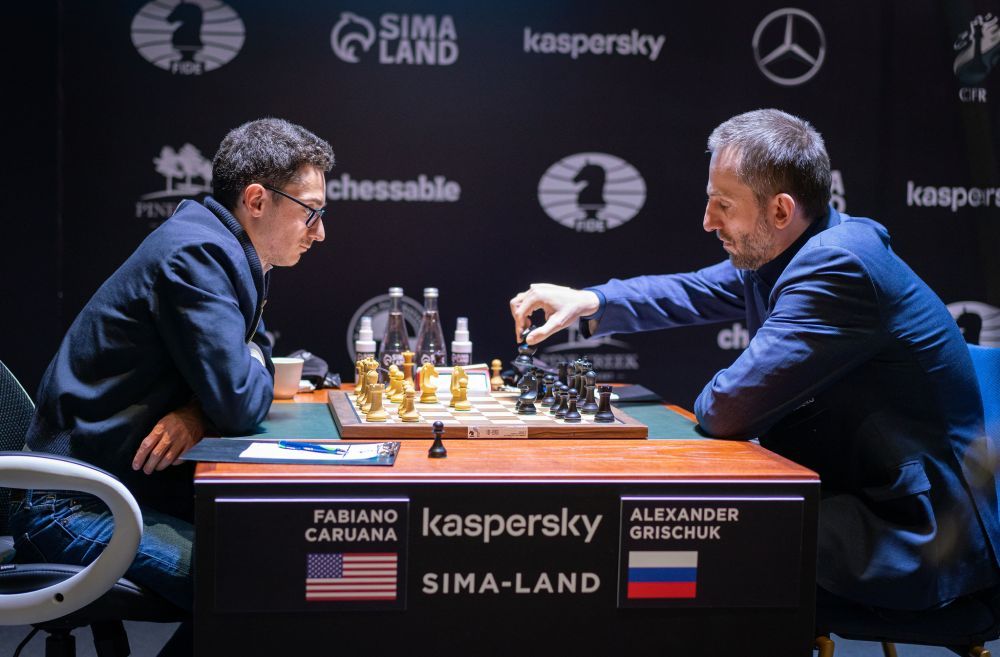 "I think it's going to be very close because he looks really strong now. Just not in this tournament but over the past year, he has looked incredibly strong. So I think he is going to be a very very dangerous opponent for Magnus." - Caruana on Ian's performance and his chances against Carlsen for the World Championship. "I already answered this question some days ago that he has less than 50% but much more than zero. Regarding his play here in this tournament, I think he played extremely well except for two games where he played just very bad, the games where he lost. The games he won I think he played just absolutely excellent." - Grischuk on Nepomniachtchi's performance and chances at the World Championship.

Final Standings after Round 14