We already know the six players who have qualified for the FIDE Candidates Tournament 2022. They are - Teimour Radjabov, Ian Nepomniachtchi, Jan Krzysztof-Duda, Alireza Firouzja, Fabiano Caruana and Sergey Karjakin. The remaining two spots will be filled up by the top finishers of FIDE Grand Prix 2022 which is slated to start from 3rd February 2022 in Berlin, Germany. Vidit Gujrathi had already qualified to the Grand Prix by finishing as a Quarterfinalist in the FIDE World Cup 2021. Pentala Harikrishna replaced Wei Yi in the 16-player lineup. There are now two Indians who have the opportunity to qualify for the Candidates 2022. Photo: Niklesh Jain

Berlin, January 21, 2022 — In just two weeks, Berlin will host the first round of the FIDE Grand Prix Series 2022, organized by World Chess. From February 3 to 17 sixteen elite chess players, including Grandmaster Harikrishna, who replaced the drop-out Wei Yi, will compete for the chance to win the last two spots in the Candidates tournament to be held later this year as well as for a EUR 150,000 prize fund.

The drawing of lots ceremony determined the pools for the first leg of the Series. The ceremony, held over Zoom, was chaired by the Chief Arbiter Ivan Syrovy and CEO of World Chess Ilya Merenzon, and attended by the Grand Prix participants.

Before the drawing, the players were divided into four baskets according to January standard rating:

Chief Arbiter allocated the players to four different groups via a randomized selection procedure. The group stage promises exciting games, with the pairings to be determined at the opening ceremony: 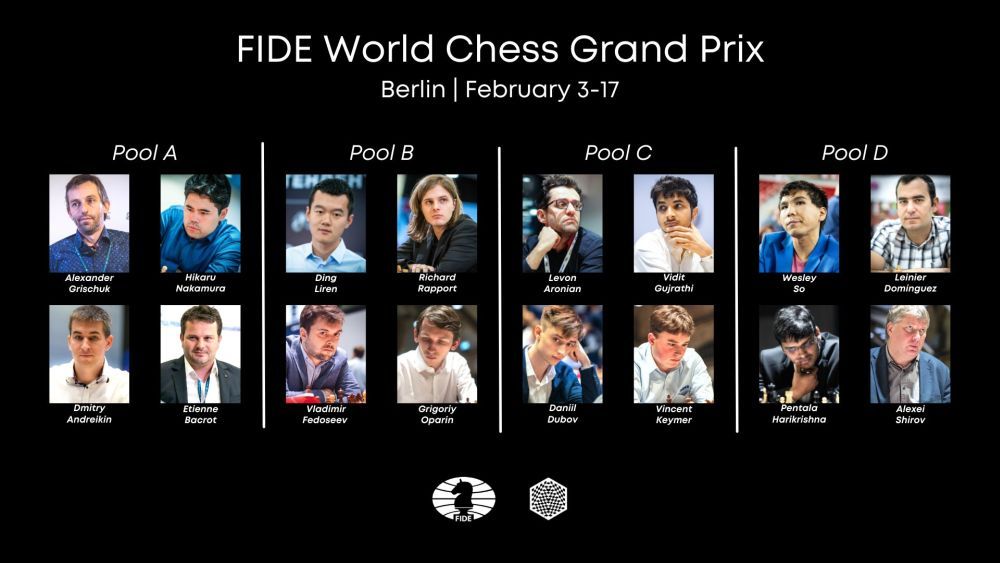 The games will be broadcast live at worldchess.com

The competition consists of three legs that span over three months and two cities:

The FIDE Grand Prix will feature 24 players, with each player competing in two out of three events.

Each 16-player event will consist of a group stage followed by a knockout semi-final and final. At the group stage, the participants will compete in four double-round-robin tournaments, with only the winners of each pool advancing. Both the semi-finals and final will consist of 2 regular time limit games, plus tiebreaks if needed.

Players receive Grand Prix points according to their finishing position in each tournament:

Two winners of the Series will qualify for the Candidates Tournament that will take place later in 2022.

The International Chess Federation (FIDE) is the governing body of the sport of chess, and it regulates all international chess competitions. Constituted as a non-governmental institution, it was recognized by the International Olympic Committee as a Global Sporting Organization in 1999.

FIDE currently has its headquarters in Lausanne, but it was initially founded in 1924 in Paris under the motto “Gens una Sumus” (Latin for “We are one Family”). It was one of the very first International Sports Federations, alongside the governing bodies of the sports of Football, Cricket, Swimming, and Auto Racing. It is now one of the largest, encompassing 199 countries as affiliate members, in the form of National Chess Federations. Chess is nowadays a truly global sport, with dozens of millions of players in all the continents, and more than 60 million games on average played every day. More information: www.fide.com