Grand Swiss R02: Adhiban on a roll, Vishy bounces back

Playing the black pieces, in round two, Adhiban Baskaran displayed some really superior handling of the Open Spanish to outplay his talented 18-year-old opponent Jeffrey Xiong and pull off his second consecutive win. Vishy Anand also made an emphatic comeback by registering a crushing victory over Israel's Tal Baron, while Raunak Sadhwani kept up his sensational performance by holding the former world champion challenger Sergey Karjakin to a draw. The FIDE chess.com Grand Swiss 2019 has already taken a sharp turn. By the end of second round itself, in the field of total 154 top-class Grandmasters, it is just five players now who lead with perfect scores of 2.0/2 points each. Adhiban is the only Indian in this group which is led by Fabiano Caruana and also includes Wang Hao, Bu Xiangzhi, and Alexei Shirov.

Adhiban is one of the five leaders after two rounds 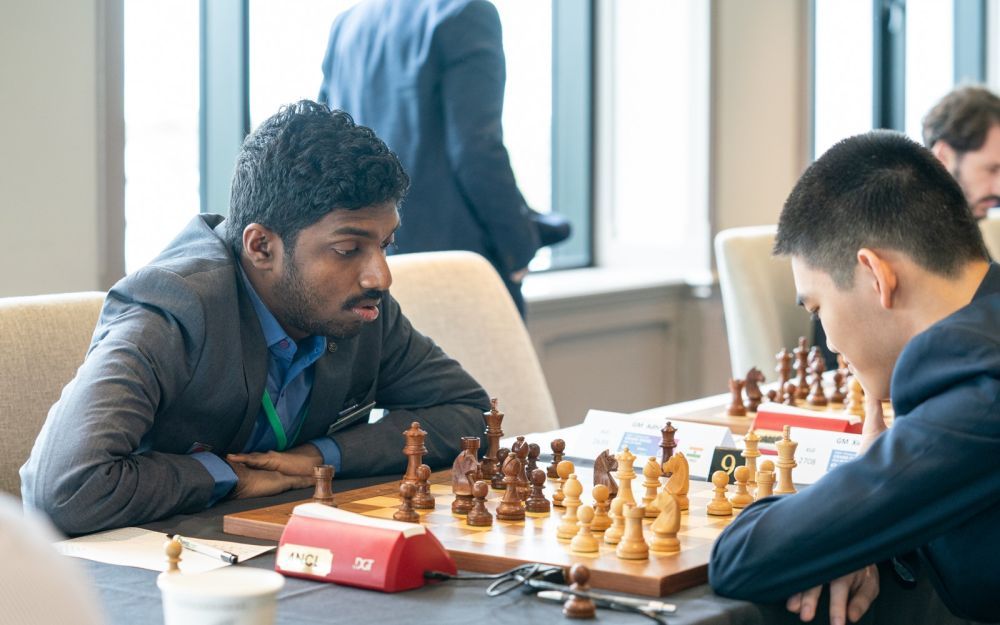 Adhiban Baskaran registered his second consecutive victory and this time with black pieces against the in-form American wunderkind Jeffery Xiong. The 18-year-old phenom was actually the rating-favourite but the Indian GM was able to hold his own and exploit the strategic mistakes made by his opponent to create a winning passer in the middle of the board. We begin by looking at the highlights of this exciting encounter. 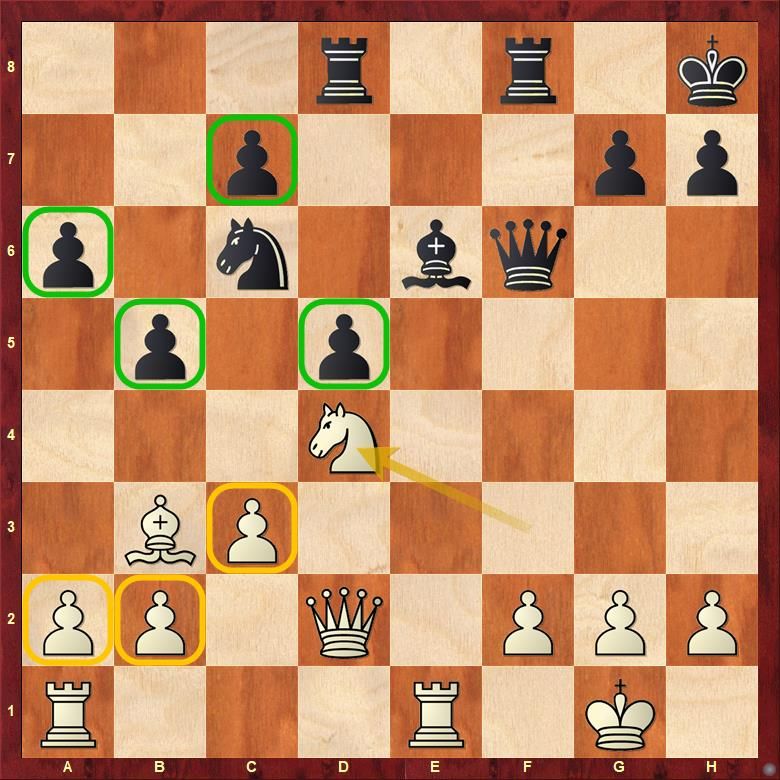 Arising out of an open Ruy Lopez, the above position is roughly equal but White must play actively as otherwise Black's four to three queenside majority can become a serious problem. Moreover, Black also has nice control of the semi-open f-file which potentially can turn dangerous. Adhiban must have been very satisfied to get such a comfortable position out of the opening. The game continued 17...Bg8 18.Bc2 Ne5 19.b4 Nc4, both players avoided exchanging pieces and Black found a strong outpost for his knight on c4. 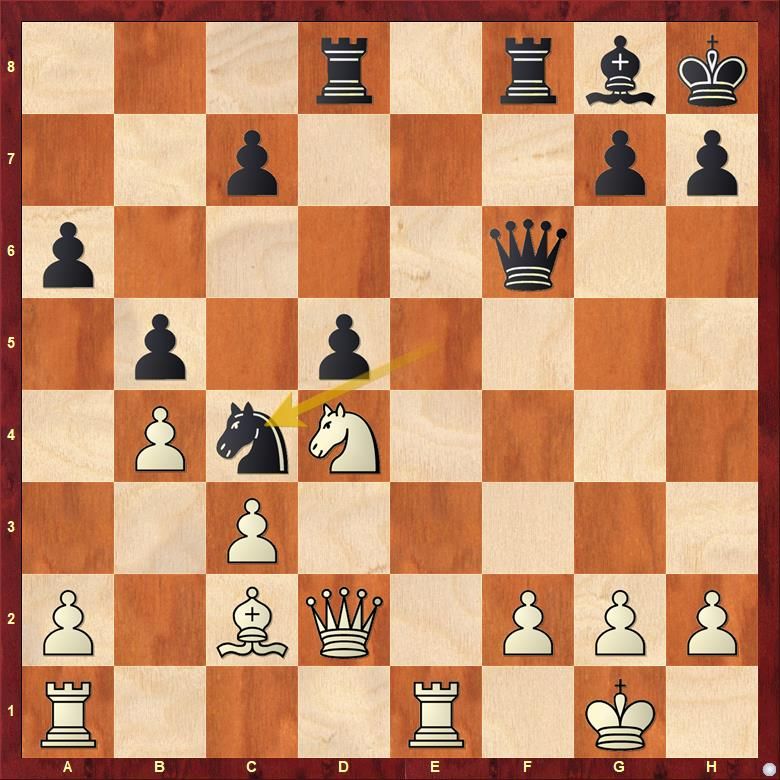 With the knight firmly lodged on c4, Black can now think about breaking on the queenside with a6-a5 followed by c5! 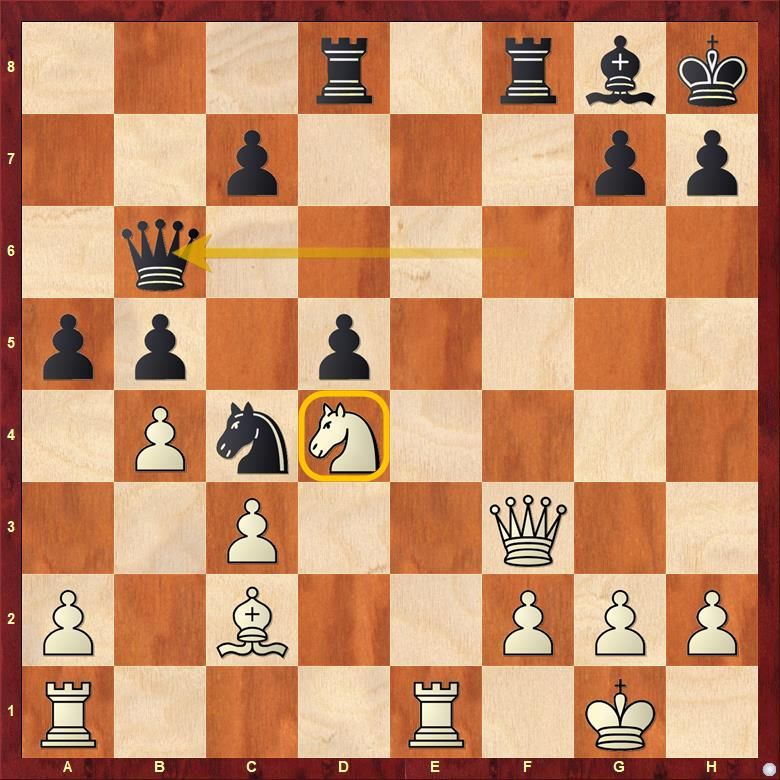 Next, with 21...Qb6 Black adopted the most incisive plan to realize his initiative. If he could only remove the d4 knight out of the way, his pawns will start rolling. How should White react in this position?

In the game 22.Qg3 was played and this was the inaccuracy that tilted the position in Black's favour. After 22...axb4 23.Nf5 Qf6 24.cxb4 d4 the d-pawn was set to run down the board scot-free! Jeffrey resigned only after ten more moves from here in a completely helpless position. 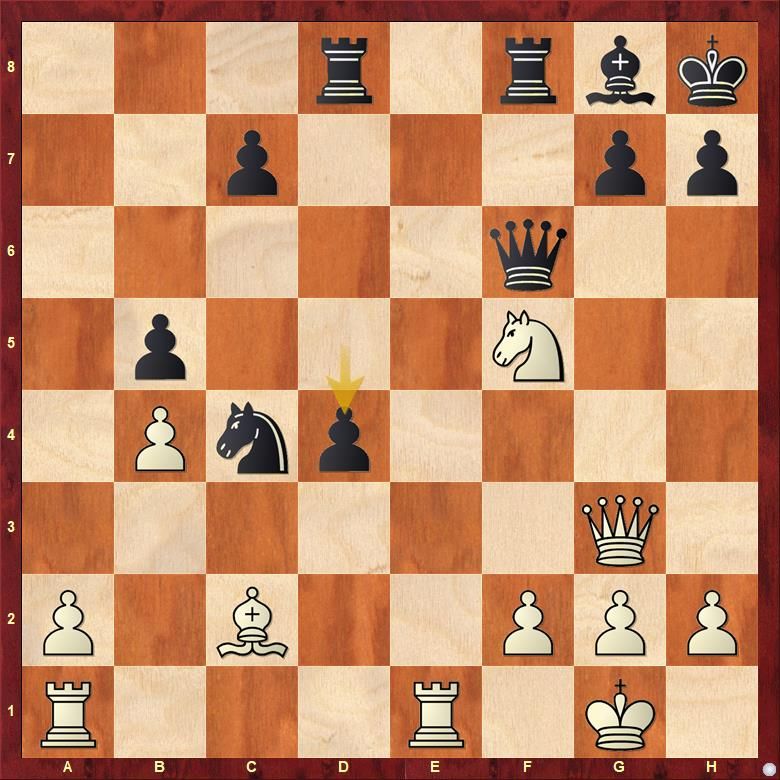 The d-pawn, supported by all the heavy pieces around, was a monster!

The correct continuation would have been 22.bxa5 Nxa5 23.Qd3 Nc4 24.a4 bxa4 25.Bxa4 where Black is still perhaps the one on the better side of equality but White has good chances. At least, here it is not easy for Black to realize his queenside majority. 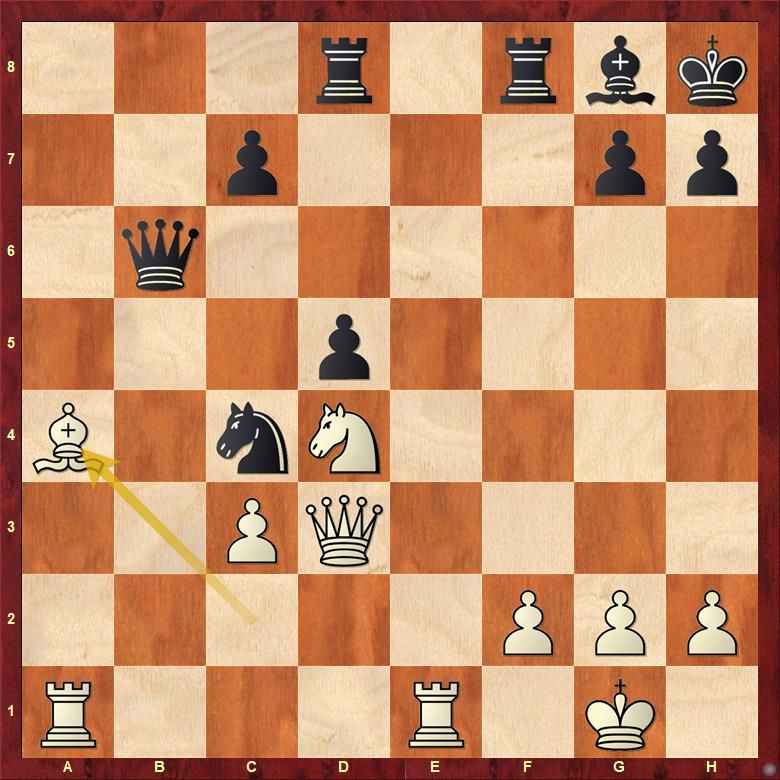 White's best chance would have been to cling on to the control of the critical d4 square. In the above position it is not easy for Black to make progress, even though he can still lash out with c7-c5 at any moment.

The full game till the end with detailed annotations can be seen below:

After suffering an unexpected defeat in round one, the Madras Tiger bounced back in the second round with an emphatic win over Tal Baron. The five-time World Champion needed just 27 moves to crush through his Israeli opponent's defenses. Tal had the black pieces and adopted the fashionable Sveshnikov variation of the Sicilian, Anand was the first to make a new move and take the game into uncharted territory. By move 15, the players castled on the opposite side of board and a double-edged fight awaited the scene. 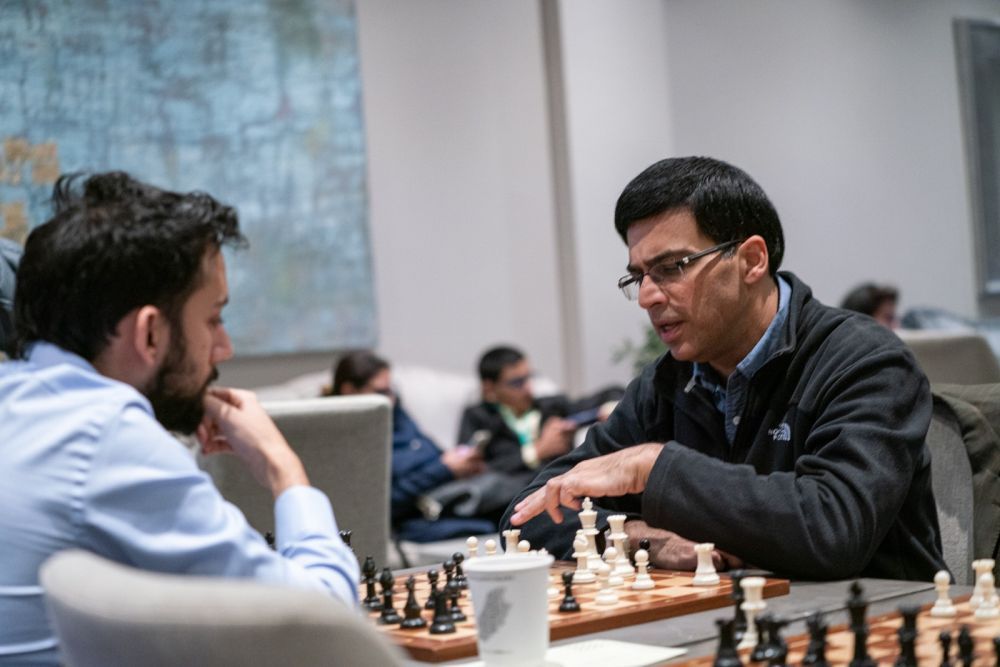 Vishy Anand in discussion with Tal Baron after the game | Photo: John Saunders 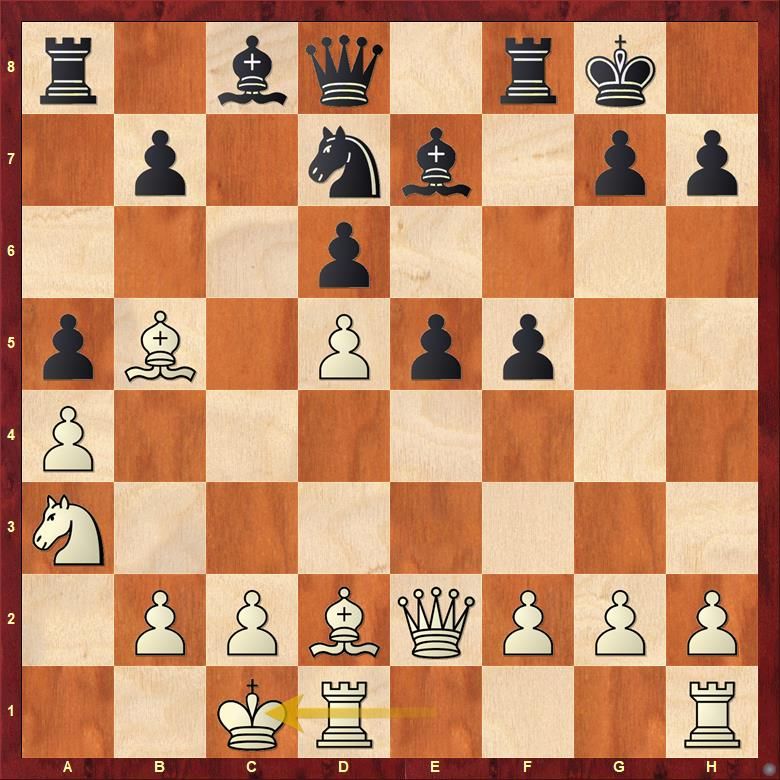 The position above must be objectively equal but practically White seems to have an edge. His pieces are more active and he has a very straightforward plan to make progress with f2-f4. 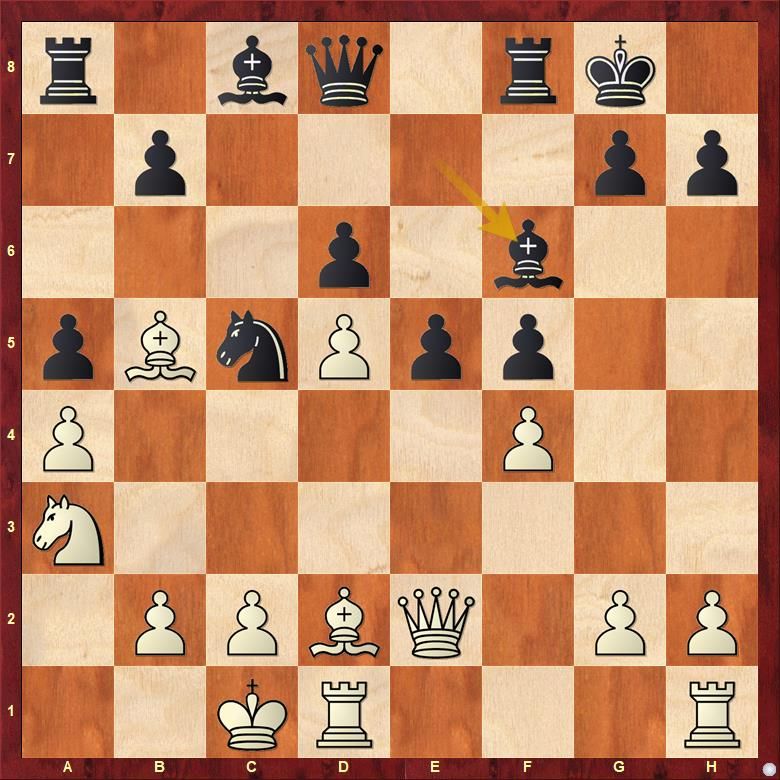 16...Bf6?! was a definite error, 16...Bd7 with the idea of exchanging the strong white bishop on b5 off should have been better. 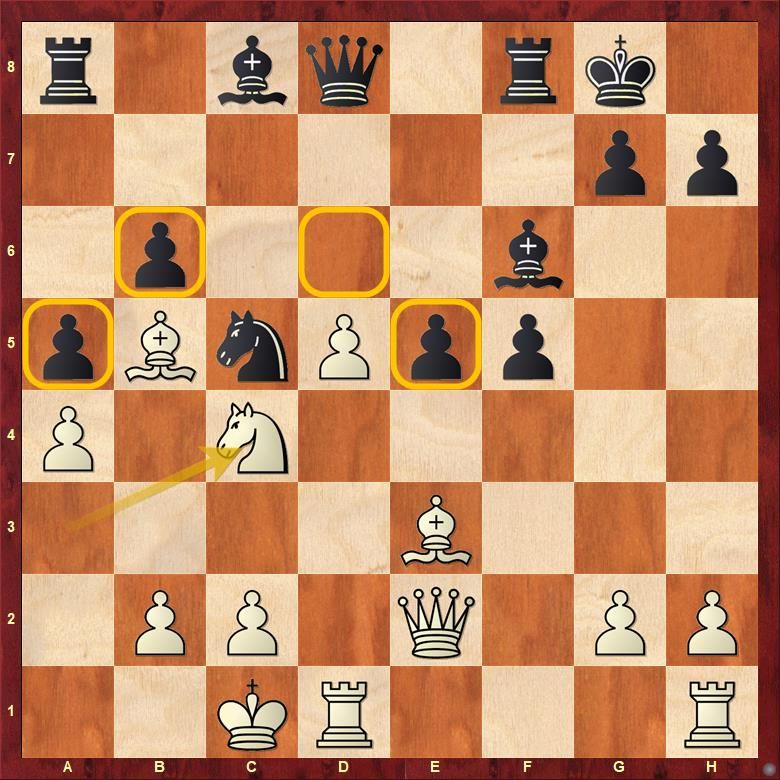 With White's mighty knight on c4, it was clear that Black would soon crumble on the queenside. 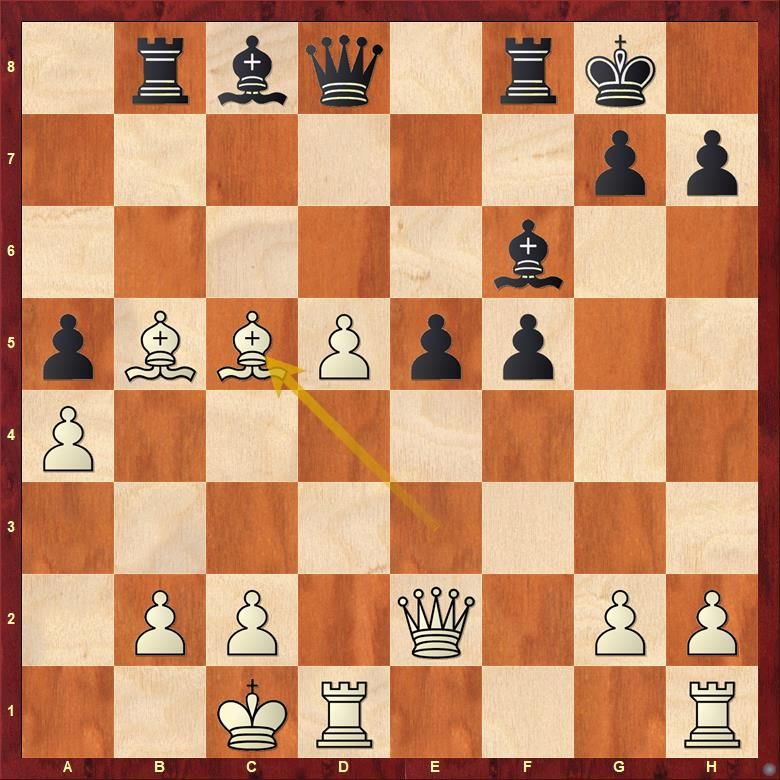 The picture of perfect domination, look at those beautiful bishops on c5 and b5! It was only six moves from here that Black decided to call it a day. The full game with brief annotations is presented below.

The two most anticipated encounters of the day were Sergey Karjakin versus Raunak Sadhwani and Boris Gelfand versus Nihal Sarin. While Raunak was able to hold his opponent to a draw quite smoothly, Nihal struggled to hold his own against Boris and lost after a 71-move long struggle. 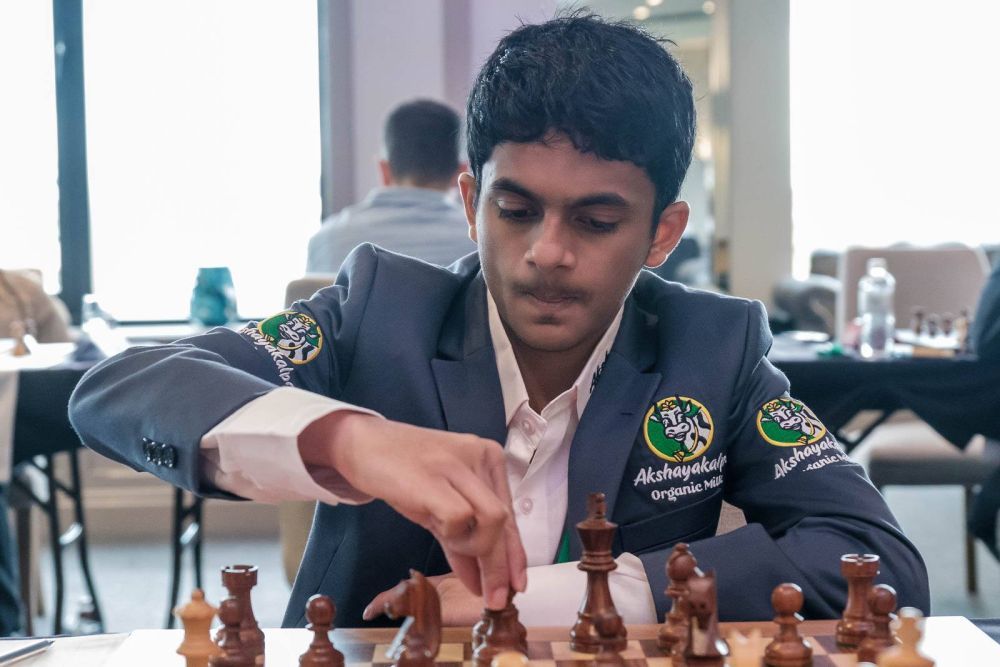 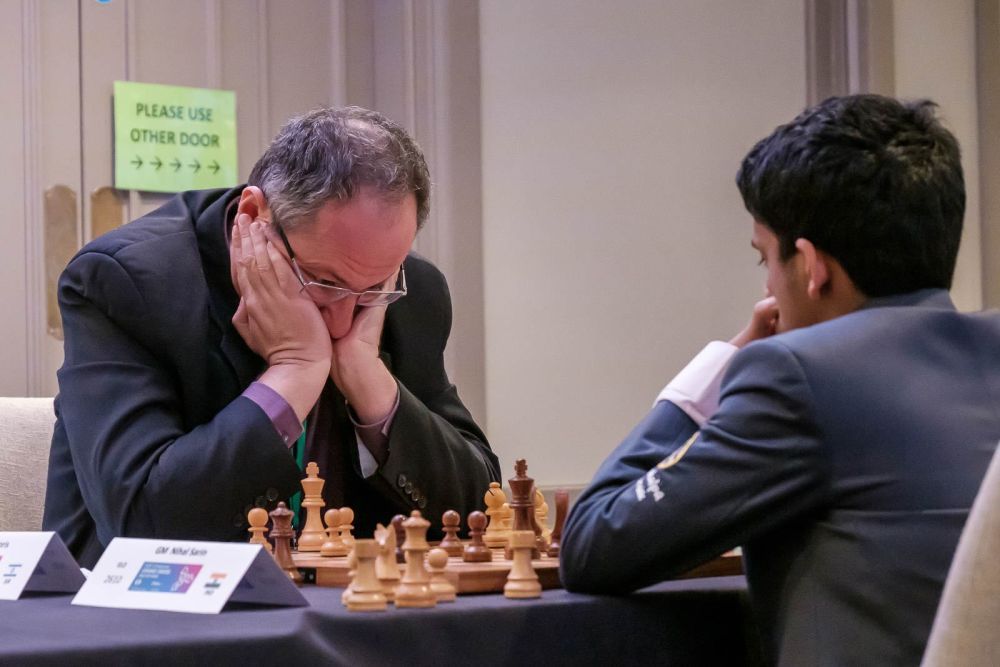 Boris had to toil hard in a bishops versus knights ending to clinch the full point | Photo: John Saunders 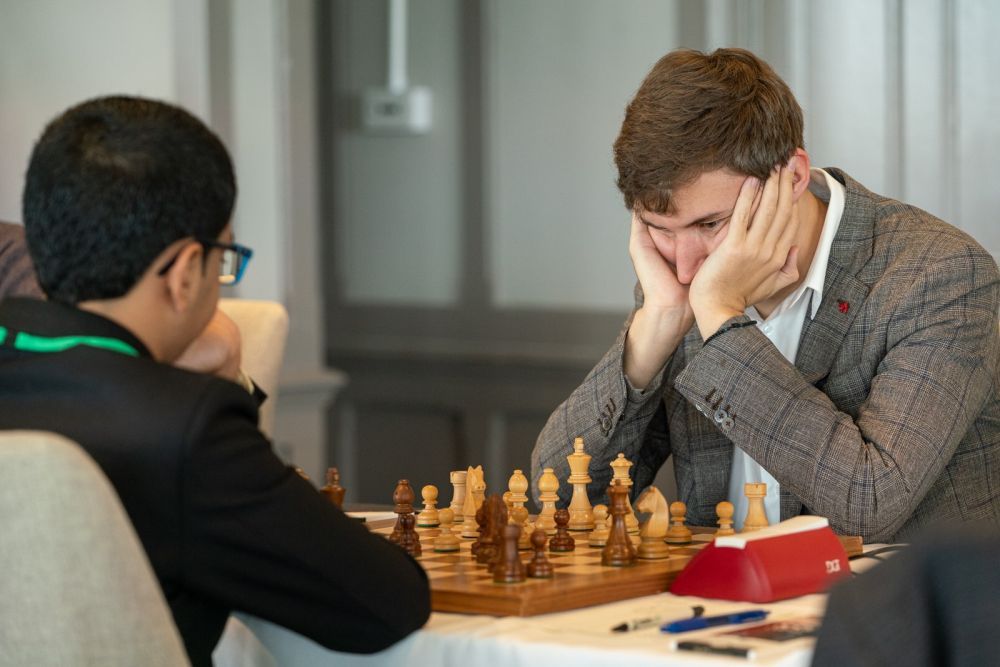 Raunak's game against Sergey was the first to finish in the whole tournament. The Indian prodigy defended very effectively with black pieces and didn't allow the former world champion challenger to make any progress | Photo: John Saunders 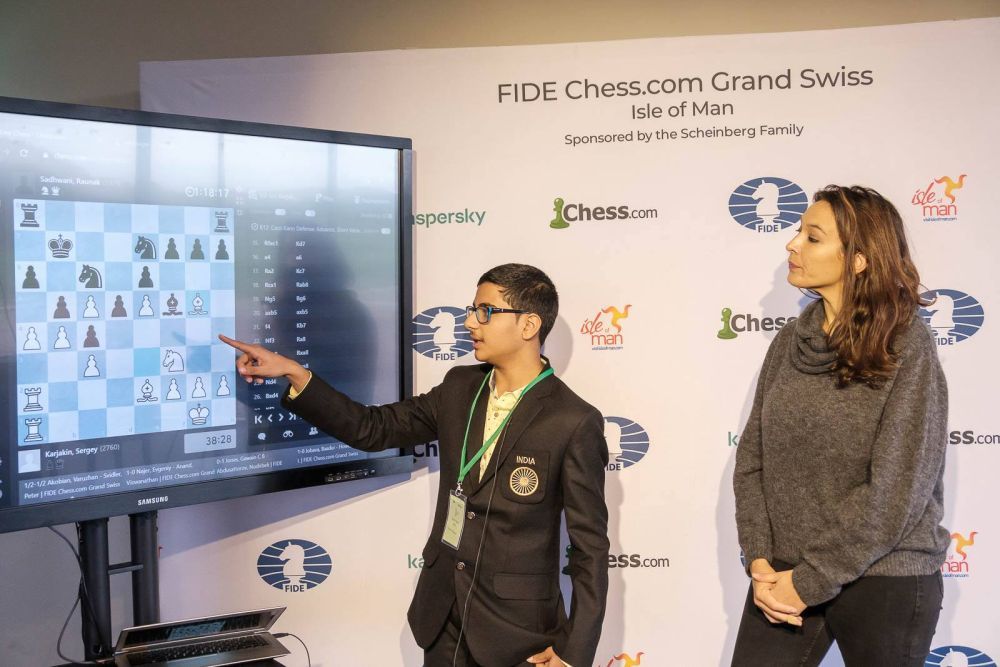 During the analysis after game. Clearly, the youngster is on his way to become India's 65th Grandmaster | Photo: John Saunders

India's Sethuraman S.P. suffered a huge shock in round two of the event as he was outplayed by Elina Danielian, who is more than 250 points lower-rated. Elina, playing the black pieces, held the upper hand multiple times throughout the topsy-turvy game but it was not until move 36 when the Indian GM made a damaging blunder that the result was finally decided.

Sethuraman is having a tough time in this event as he has lost both his games so far | Photo: Amruta Mokal 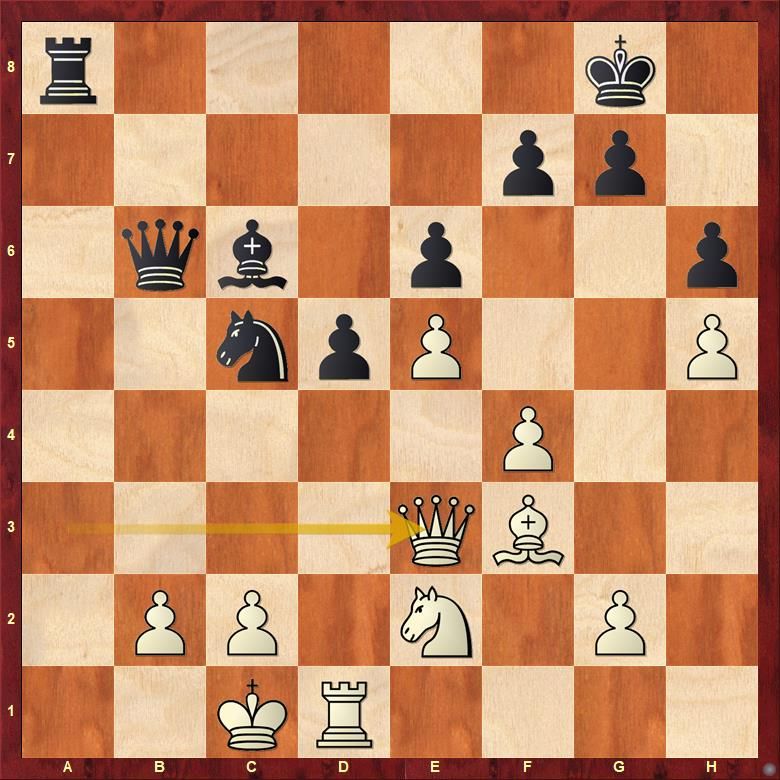 Can you see what Sethuraman had missed when he played 36.Qe3? Check out the full game below to know the answer. 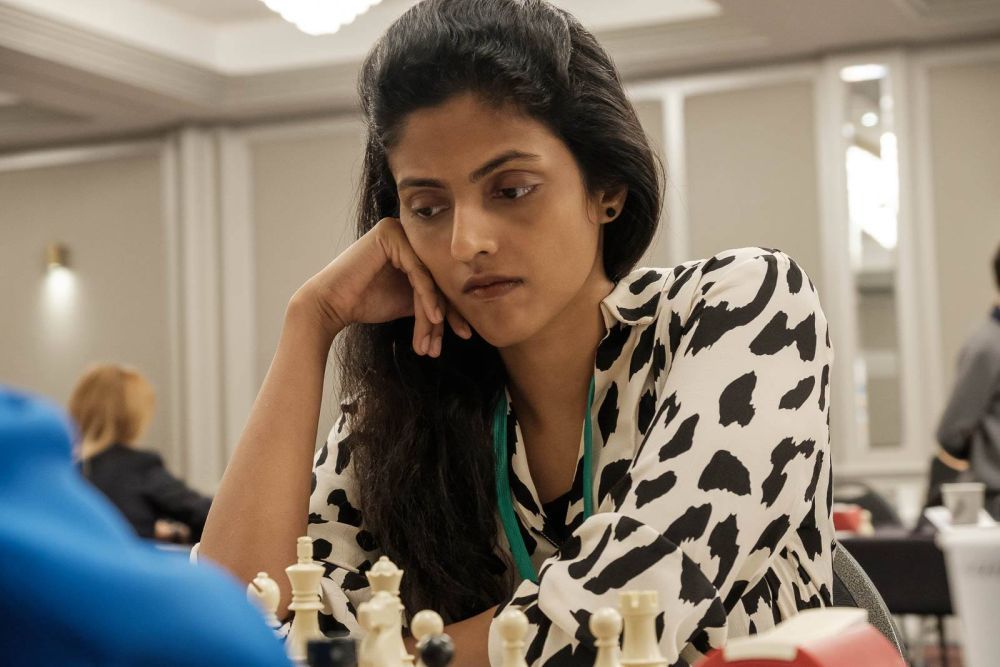 Harika Dronavalli drew once again, this time against Ray Robson (2670), in the second round of the event and now has 1.0/2 points | Photo: John Saunders 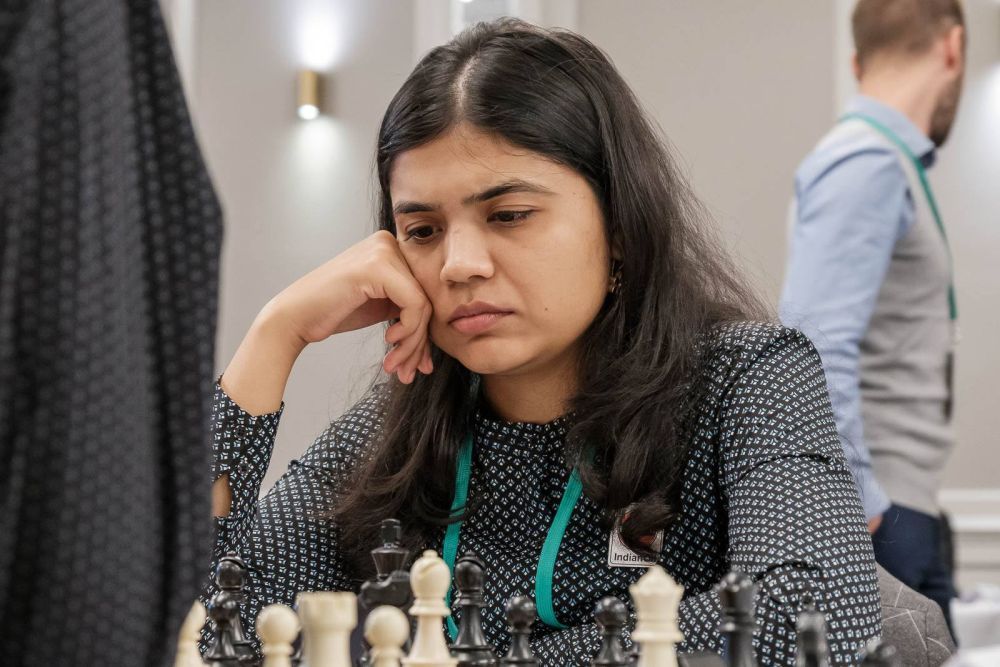 Soumya Swaminathan held Robert Hovhannisyan, rated more than 250 points above her, to a draw with black pieces in round two | Photo: John Saunders 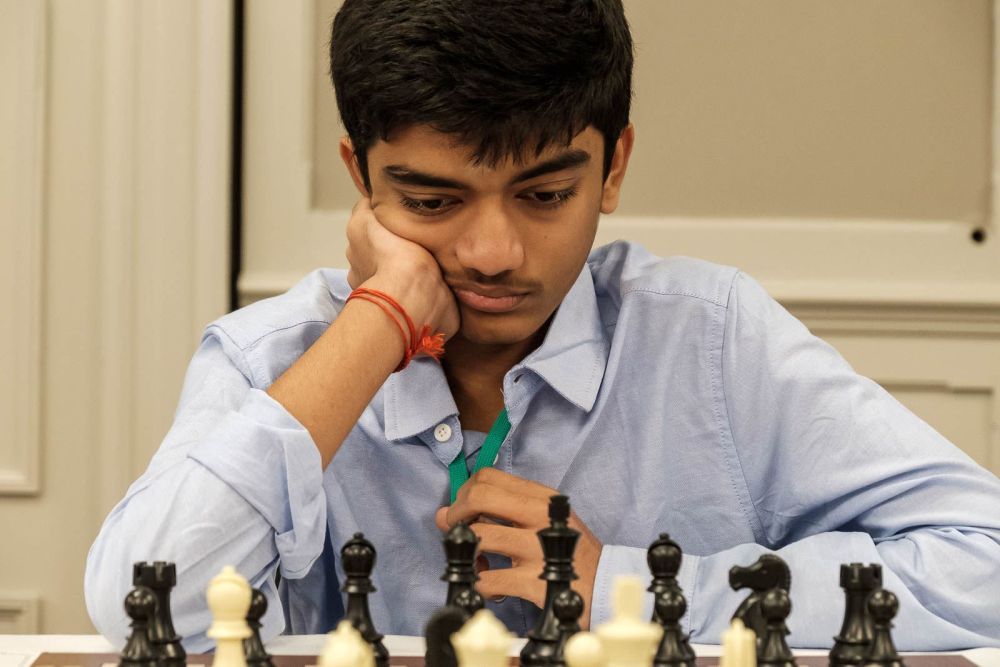 Results of all Indian players from round two

Pairings of all Indian players for round three

Results of top ten boards from round two

Top ten Pairings for round three