Grand Swiss R05: The resurgence of the World Champion

Magnus Carlsen registered a convincing win against India's Surya Sekhar Ganguly in round five of FIDE Chess.com Grand Swiss 2019. It has been a shaky first few rounds for Magnus here in Isle of Man. But thanks to the eleven-round swiss format, there still is ample scope for the World Champion to recover from his initial hiccups in the event. The Norwegian surely understands that and with this fifth round victory it seems he is on his way to make his presence felt. Overall, day five of the tournament went fairly well for the Indian contingent. Apart from Ganguly only Gukesh D and Soumya Swaminathan had to suffer defeats. Vishy Anand won a dominating game with the black pieces against Axel Bachmann and Adhiban Baskaran made a refreshing come back beating David Howell. Elsewhere, Abhimanyu Puranik, Nihal Sarin, and Prithu Gupta too registered impressive wins.

After miraculously saving a lost game in the previous round, the World Champion Magnus Carlsen was vying to make a strong comeback in round five against Surya Sekhar Ganguly of India. Playing with the white pieces, he evinced his intentions right from the start and treated the Indian's Najdorf with the ambitious 6.h3 system. Ganguly aimed for solidity but ended up being somewhat passive which enabled the Norwegian to establish his stranglehold on the position. 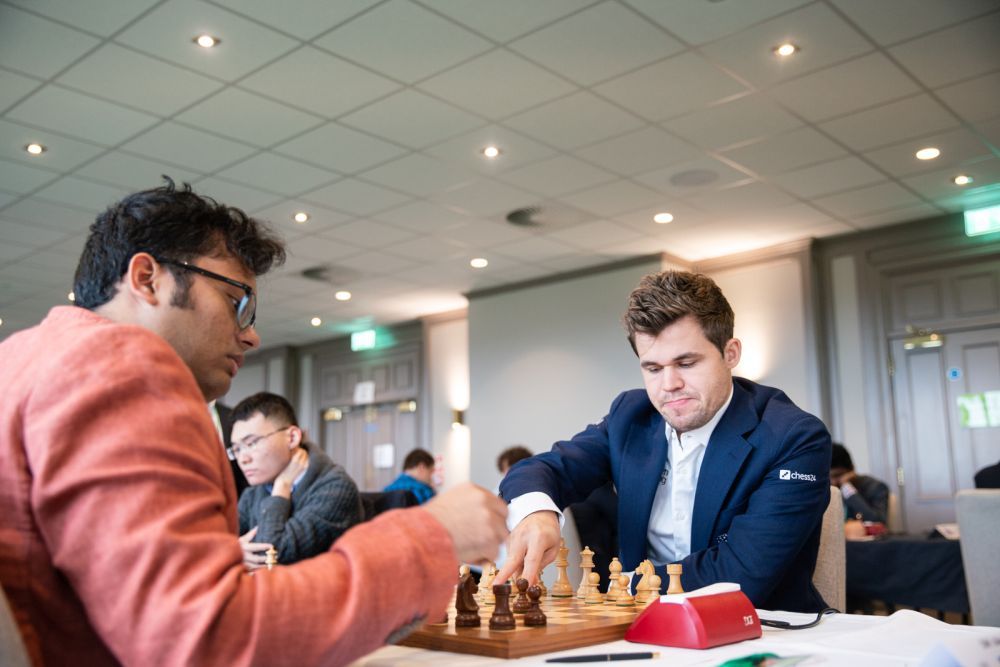 The last time Carlsen played Ganguly was in Dubai back in 2004. He won that game and it incidentally helped him to make his Grandmaster title | Photo: Maria Emelianova 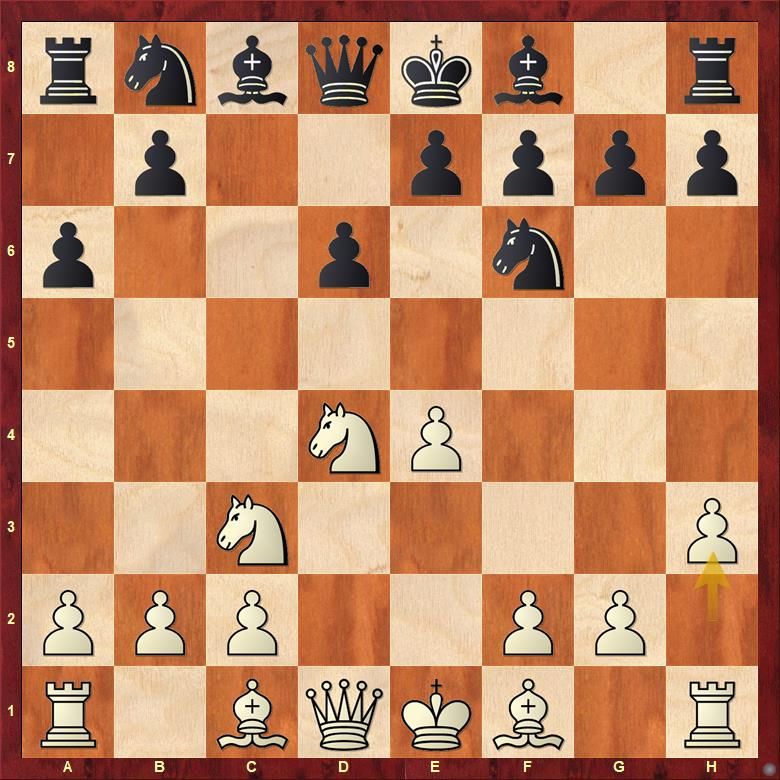 Magnus adopted the unusual 6.h3 against the Sicilian Najdorf. Obviously, White wants to lash out an early g2-g4 and go for the initiative.

This little pawn push on the sixth move is what is known as the Adams attack and its basic purpose is twofold. Firstly, it sets up the stage for an early kingside attack with g2-g4 and secondly, it prepares to fianchetto the bishop on g2 and establish a firm control on the d5 square. However, Magnus handles this position from here on in quite an unorthodox way. 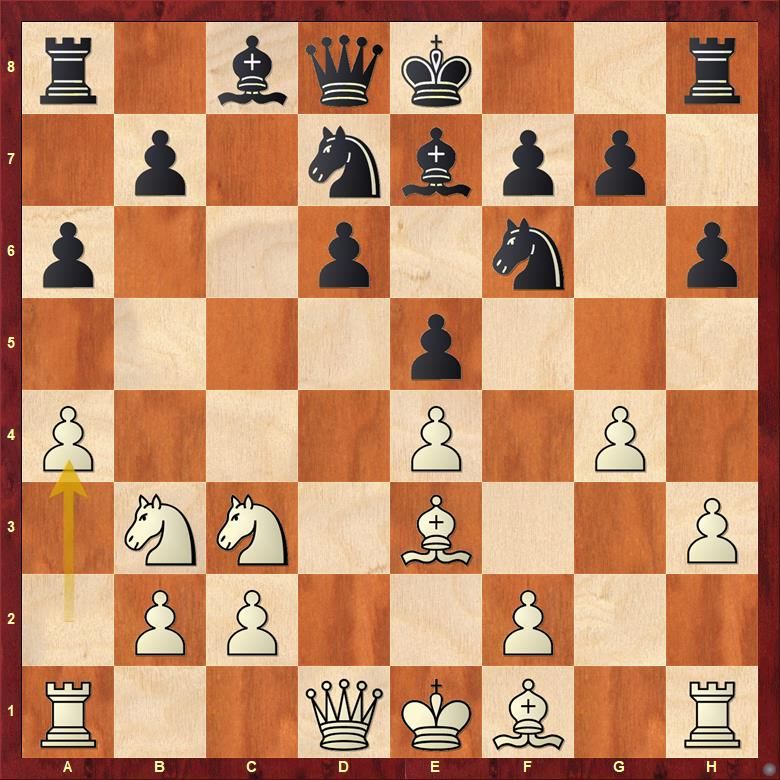 10.a4!? was an interesting improvisation by the World Champion. In an interview after the game he admitted that it is a bit risky to go g4 and a4 at the same time for it makes the king on e1 a bit insecure. 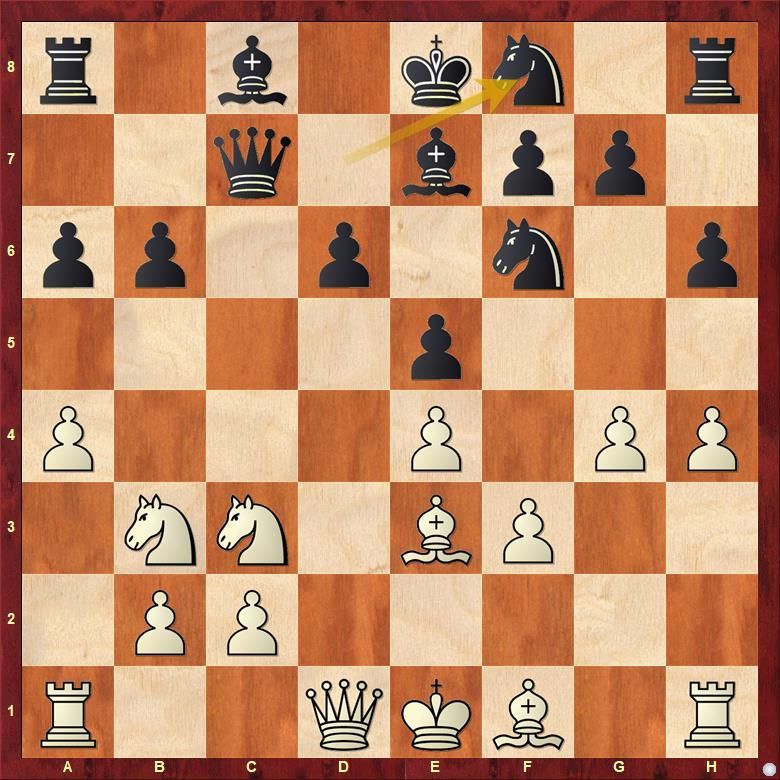 And this was perhaps the most critical moment in the game which allowed White to take the upper hand. 12...Nf8 was a new move by Ganguly and an attempt to play solidly but 12...Bb7 with the idea of breaking with d6-d5 at some point should have been better. 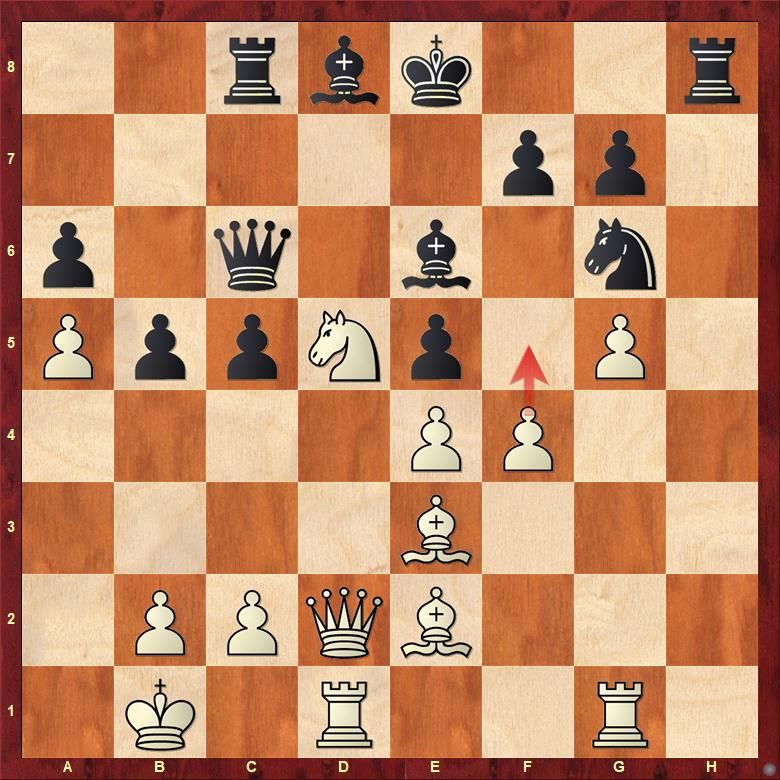 Once the white king became absolutely safe on b1 it was time to open up some more lines and hence came 23.f4! 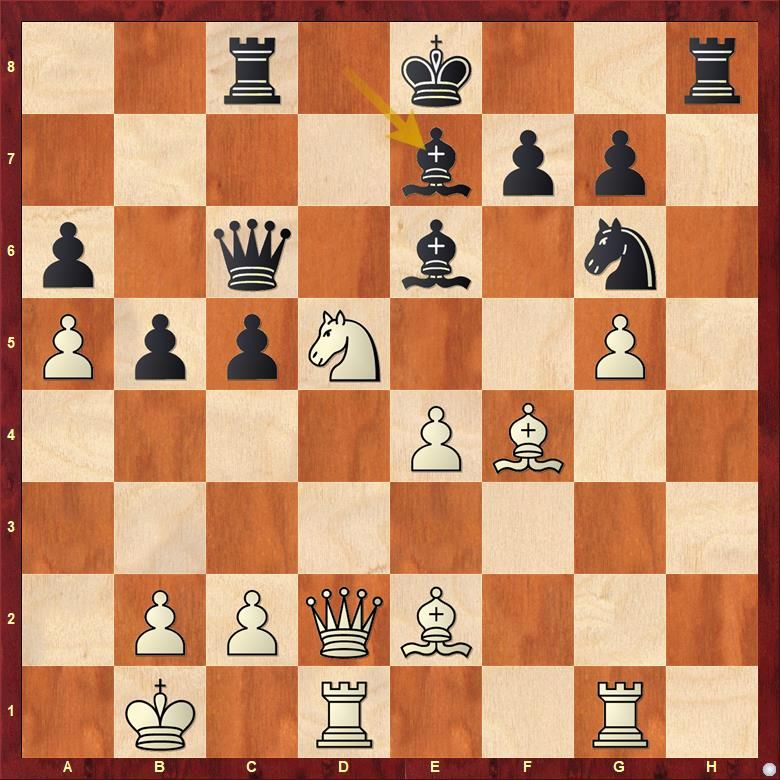 Finally, 24...Be7 was the slip that sealed Black's fate. After 25.Nxe7 Kxe7 26.Bd6+! everything became way too exposed. To see how Magnus converted his advantage check out the full game below.

An emphatic comeback for Adhiban! 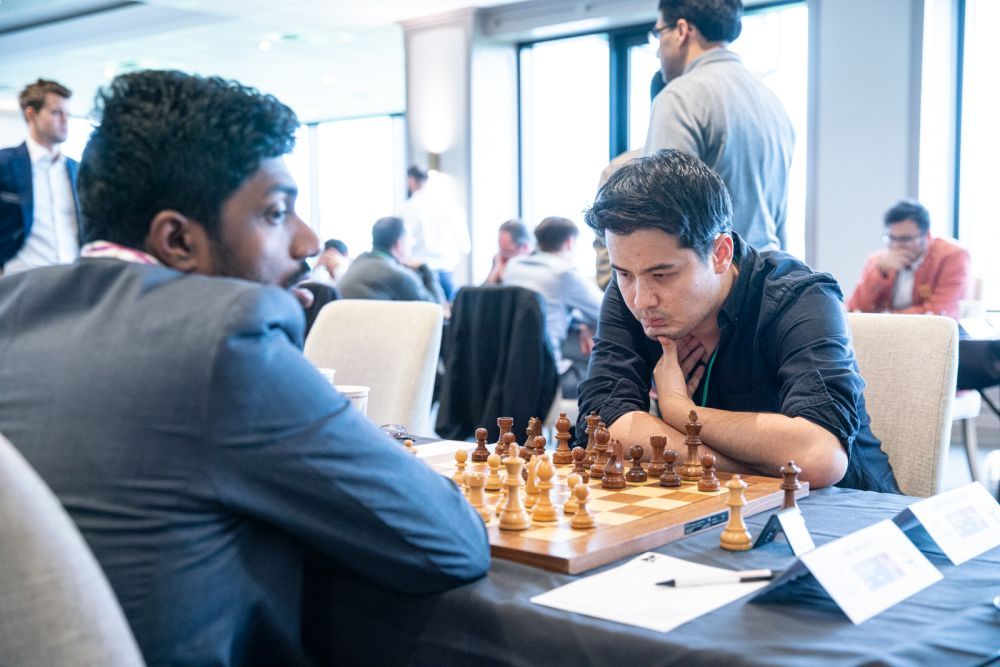 Adhiban Baskaran recovered well from his last round defeat against Luke McShane and beat David Howell to be back on the top pack | Photo: Maria Emelianova

Adhiban went for the open Catalan with the white pieces in this game and secured a small edge right out of the opening when his opponent made an inaccuracy on move 13. The Indian GM didn't have much difficulty thereafter to capitalize, he liquidated into a superior ending and managed to push black completely into passivity by bringing all his pieces to active play. The full game with brief annotations is presented below. 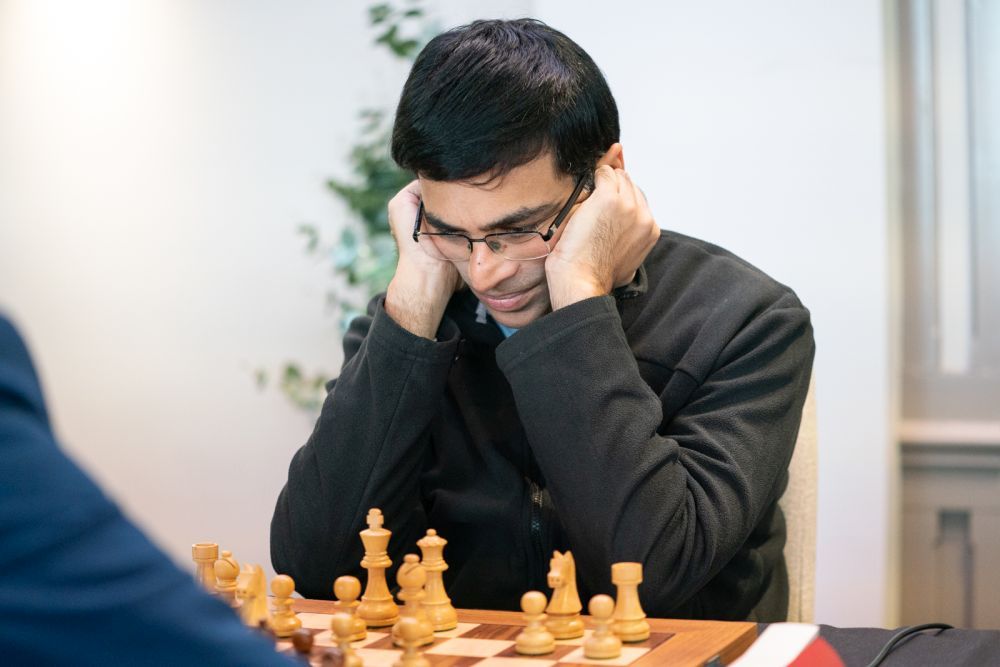 Vishy Anand dominated his opponent Axel Bachmann with the black pieces right out of the opening. The Madras tiger got an advantage as early as move thirteen and by move thirty had full command on the position. The game ended after 43 moves with the Paraguayan resigning | Photo: Maria Emelianova 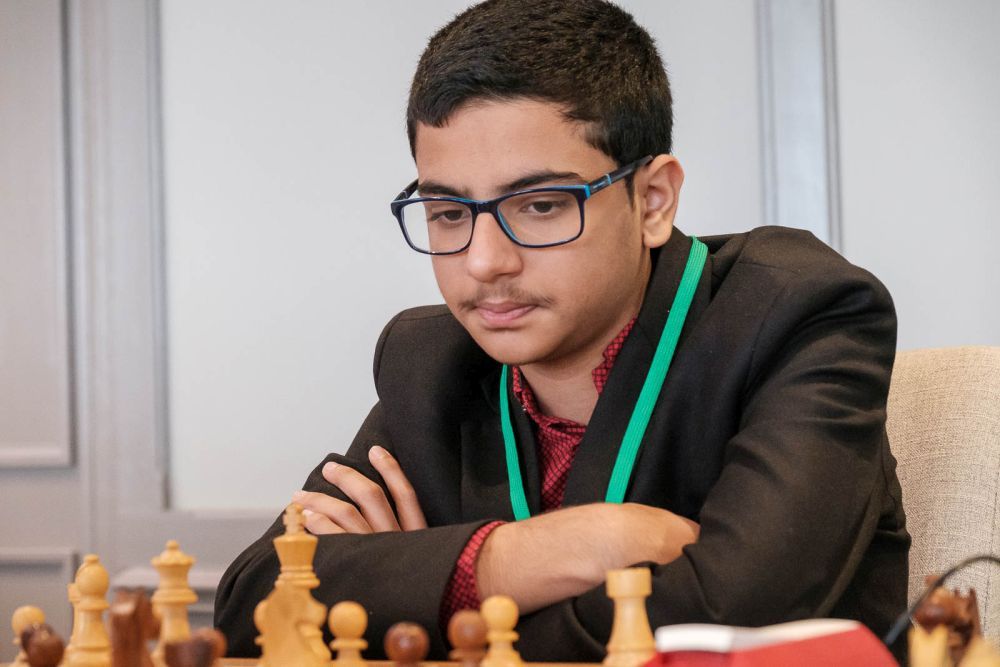 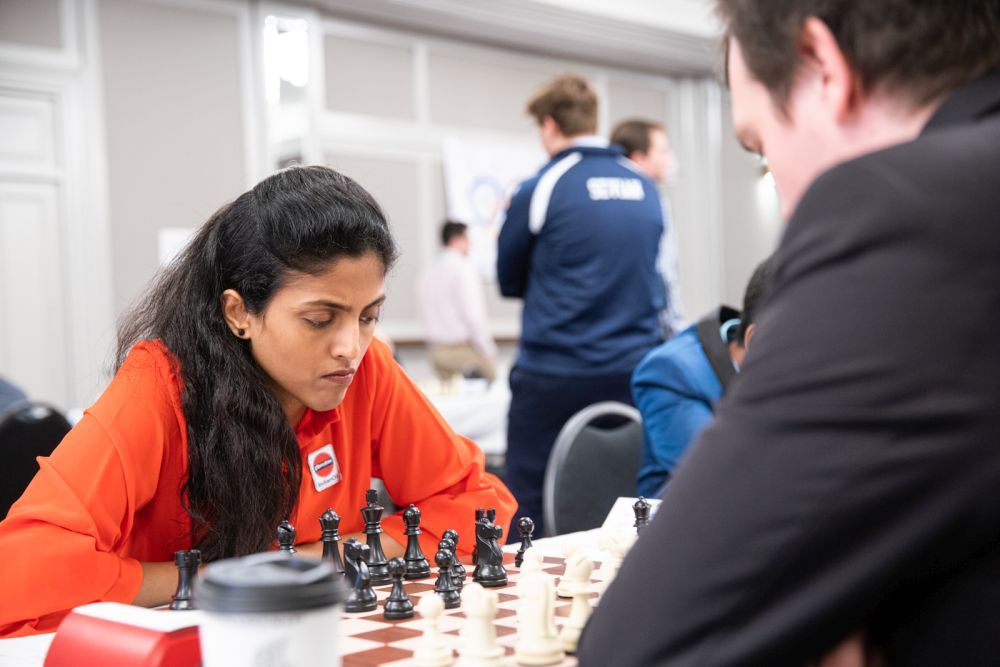 Harika Dronavalli found herself in some trouble against Piorun Kacper after an unusual opening where both sides had all sixteen pieces intact till about move twenty. However, the highest rated female in the event put up excellent resistance to force the split of point | Photo: Maria Emelianova 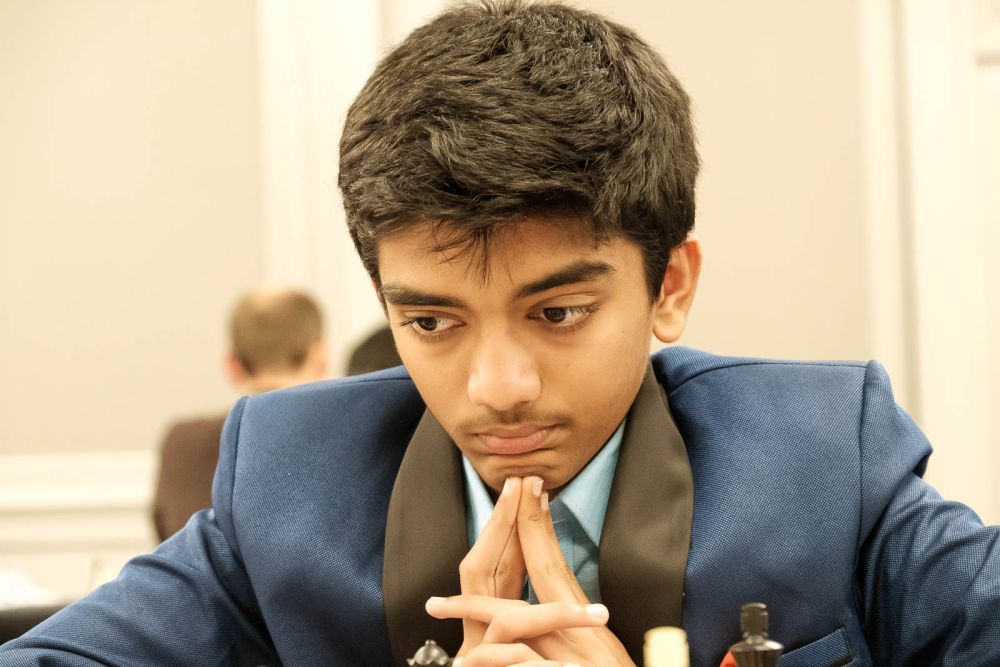 Gukesh suffered his second defeat in the event against GM Ferenc Berkes. He has the white pieces against IM Jovanka Houska in the next round | Photo: John Saunders 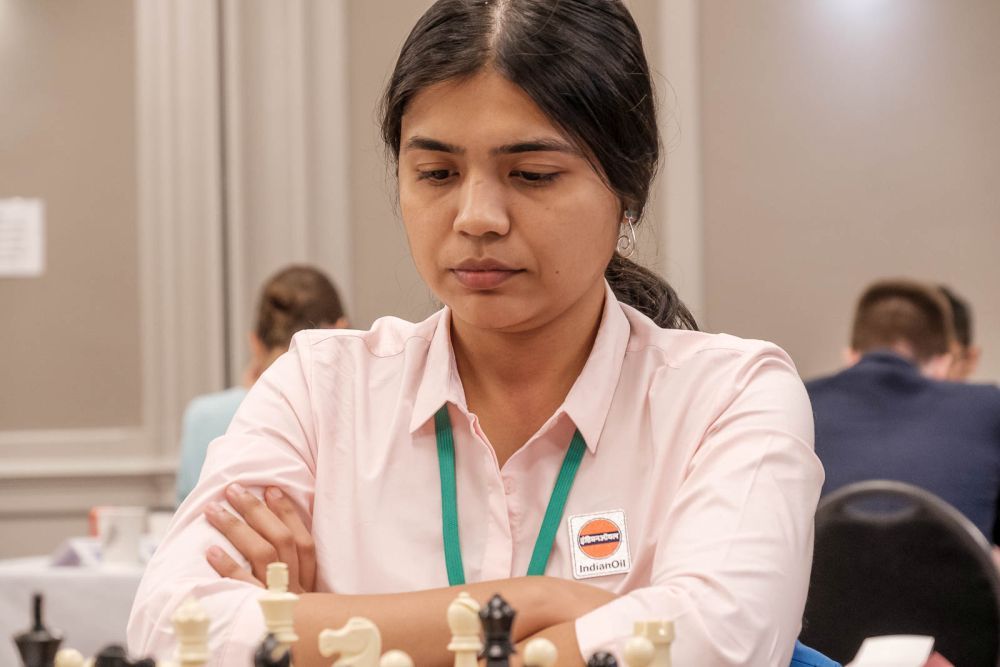 Soumya Swaminathan was the other Indian who lost in the fifth round. She was defeated by Alekseev Evgeny | Photo: John Saunders 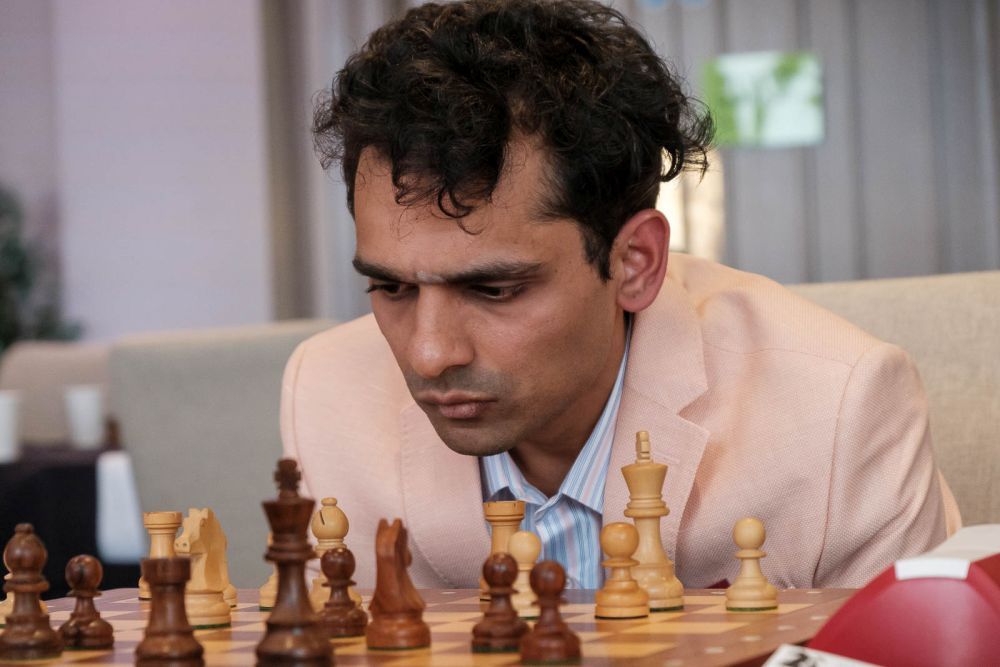 Krishnan Sasikiran has impressively remained unbeaten in the event. He held GM Aleksandr Rakhmanov to a draw in round five | Photo: John Saunders

Results of all Indian players