Magnus Carlsen made an unbelievable escape from a completely lost position in the fourth round of FIDE Chess.com Grand Swiss in Isle of Man here. The World Champion was up against Vladislav Kovalev with the black pieces and just twenty-seven moves into the game found himself in severe trouble. But fortunately it was his opponent's poor management of time that finally spared him of what would only have been a crushing defeat. The first board encounter between the World No 2, Fabiano Caruana, and China’s Wang Hao ended in a draw. The two have now been joined at the top by the World Junior Champion Parham Maghsoodloo and England’s Luke McShane who got the better of Vidit Gujrathi and Adhiban Baskaran respectively. Apart from the electrifying Kovalev-Carlsen clash, the performance of the Indian contingent in the fourth round was rather sombre. We bring an illustrated report.

The stupendous escape of the day!

It is not just the ability to dominate one's rivals but also the resolve to bounce back out of impossible situations, the will to contain large damages and not letting them turn into catastrophe, that distinguishes a true champion from the ordinary. The fourth round of FIDE Chess.com Grand Swiss 2019 reflected among other things the depths of the current World Champion's resilience. Magnus Carlsen was in the brink of an imminent loss against the 2661 rated Belarusian Grandmaster Vladislav Kovalev. But the World no.1 had only one thing going for him: Kovalev was in serious time trouble – he had less than two minutes to make 14 moves and reach the first time control. Magnus, resourceful as ever he is, exploited this little upside of an otherwise miserable situation to the fullest and as he kept finding one defensive move after another, his opponent faltered trying desperately to keep up with the ticking clock beside. The next thing you know, the World Champion survived and escaped unscathed with a draw after 47 moves! 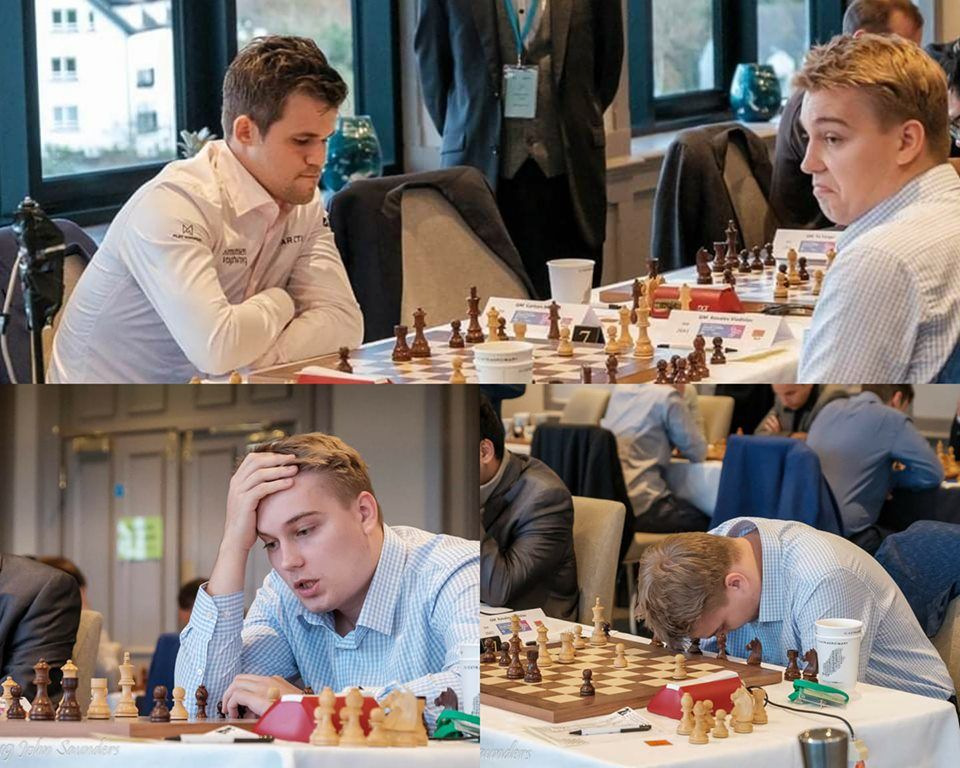 Pictures do speak more than a thousand words. These vivid snaps captured by John Saunders in the venue say it all!

Without further ado let us see what exactly happened. Magnus had the black pieces and the game opened with a Sicilian Moscow - standard recipe for white players these days to bypass heavy Najdorf theory. Interestingly, till about move 10 the players followed one of Carlsen's own games from two years ago against Etienne Bacrot in Paris GCT. But soon enough the battle shifted into unexplored terrain. 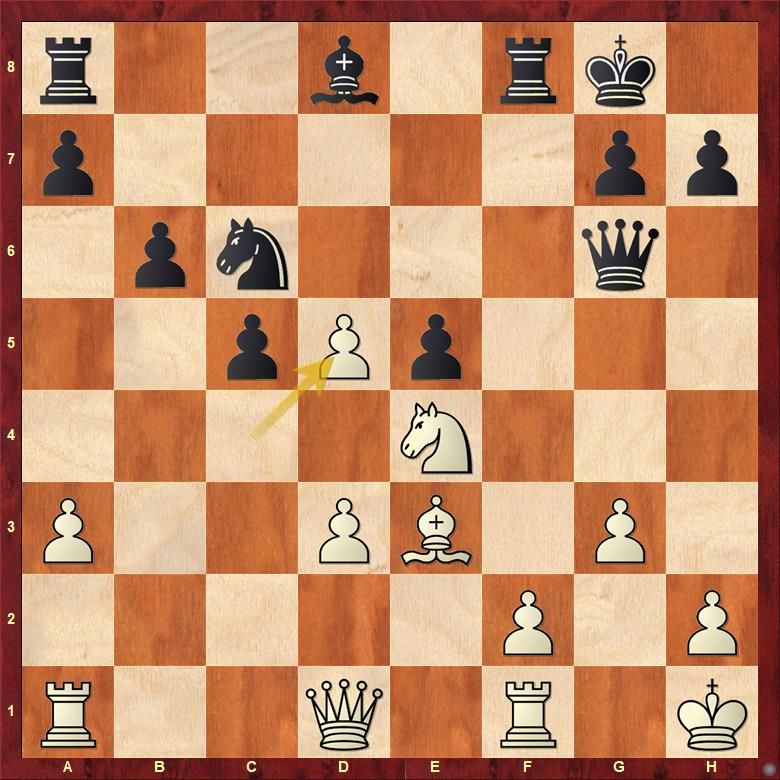 It was at this point when Magnus became a bit wobbly as White got in 19.cxd5. The World Champion played 19...Ne7 here, can you suggest an improvement? 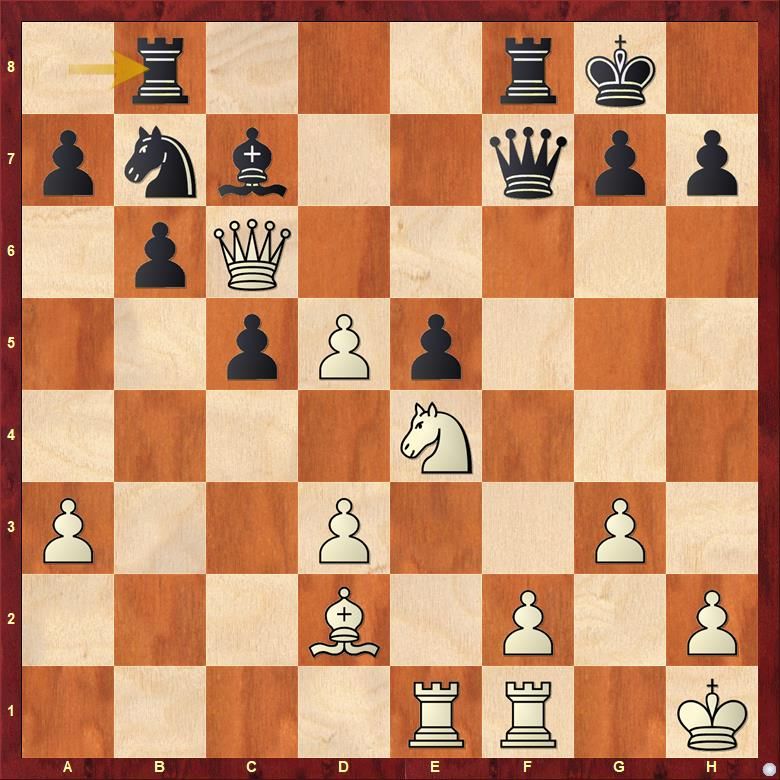 Black is doing absolutely fine after 23...Rab8 of the line mentioned in the last paragraph. As we can see he has very good control over the d6 square and there is little White can do to make progress here. 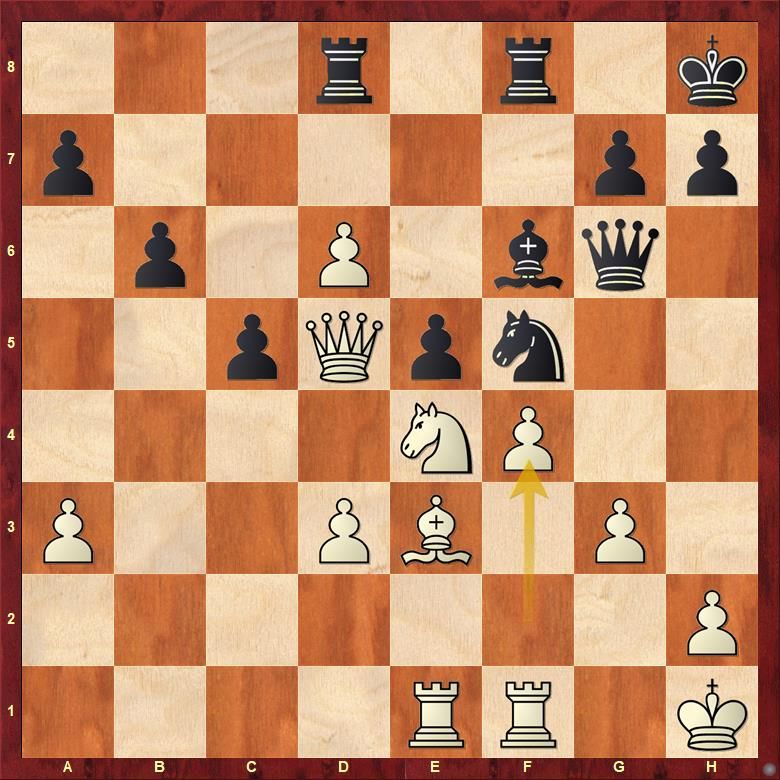 In the game however things turned tricky with Black's Ne7-Nf5 idea. White got in d5-d6 immediately and it was in the above position Magnus blundered with 24...Nxe3

It is hard to imagine the World Champion erring so early in the game but that's what happened here. Soon White managed to push his d-pawn all the way to the seventh rank! This is very straightforward chess and everyone could see that Magnus was in serious trouble. 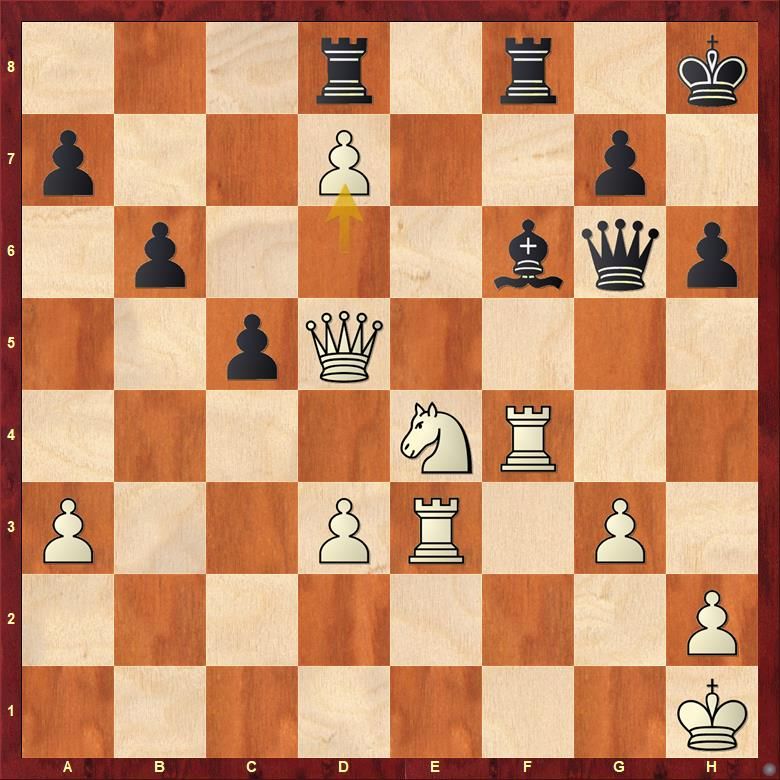 White's d7 pawn is well-supported by all the heavy pieces. It is quite clear what the logical result from this position is!

Kovalev had multiple ways to force a win from this position and even later (some sample lines can be found in the annotation below) but it was this plethora of choices that overwhelmed him. Of course, it was the clock that also betrayed, he came under immense time pressure and simply kept missing the winning moves that lay in front of him on the board. Check out the perpetual tragicomic turn of events for yourself below:

The Belarusian's plight was succinctly encapsulated by Emil Sutovsky, Grandmaster and FIDE Director-General, who wrote the following on his Facebook page: "Once Yussupov taught us, the young students of Polugaevsky chess school: when you are clearly winning - pick one move, focus on it and calculate till the end. Do not compare. But to Magnus' luck, Kovalev did not attend that lesson..."

Here is what Sutovsky expressed on his timeline just after the game: 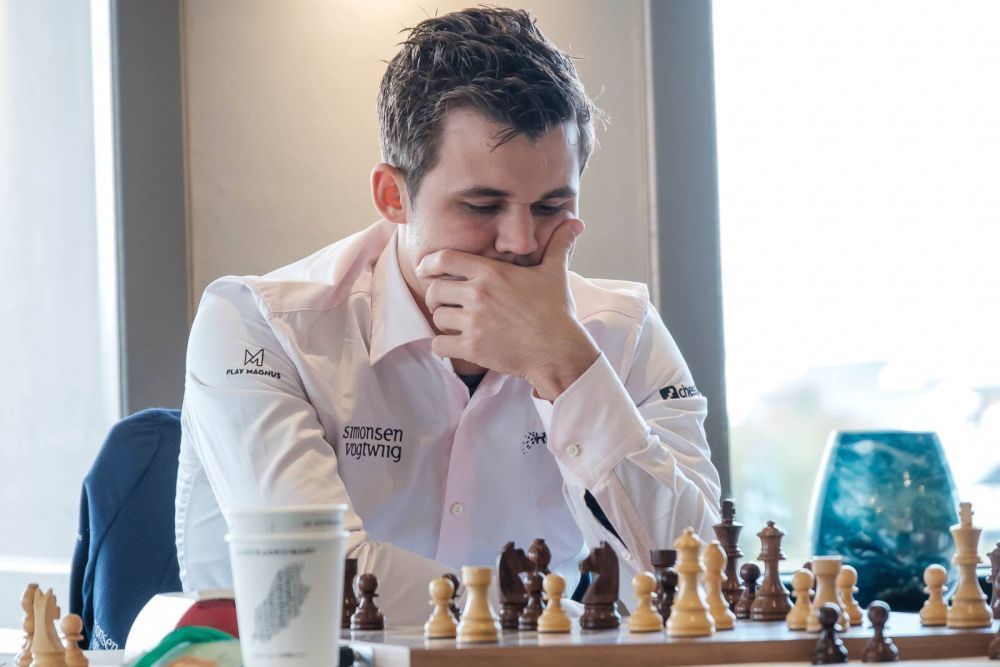 Be it his X factor or indomitable will to defend, with this stupendous save Magnus has furthered his unbeaten streak to 94 games. It has been 439 days since the World Champion was last defeated! | Photo: John Saunders

A dismal day for Indians

While electrifying drama was unfolding on board seven between Kovalev and Carlsen, the Indian contingent wasn't experiencing all that great time. Sethuraman SP and Prithu Gupta were the only players to fetch wins on the fourth day of the event. Prithu had a devastating start with three losses in a row, he made his first point only in round four beating the Russian WGM Vera Nebolsina. Sethuraman's victory too came only against a lower rated opponent, IM Brandon Clarke of England. Elsewhere, Vidit Gujrathi, Adhiban Baskaran, and Nihal Sarin lost their respective encounters against Parham Maghsoodloo, Luke McShane, and Peter Leko. While Vishy Anand made a quick draw against Mircea Parligras. 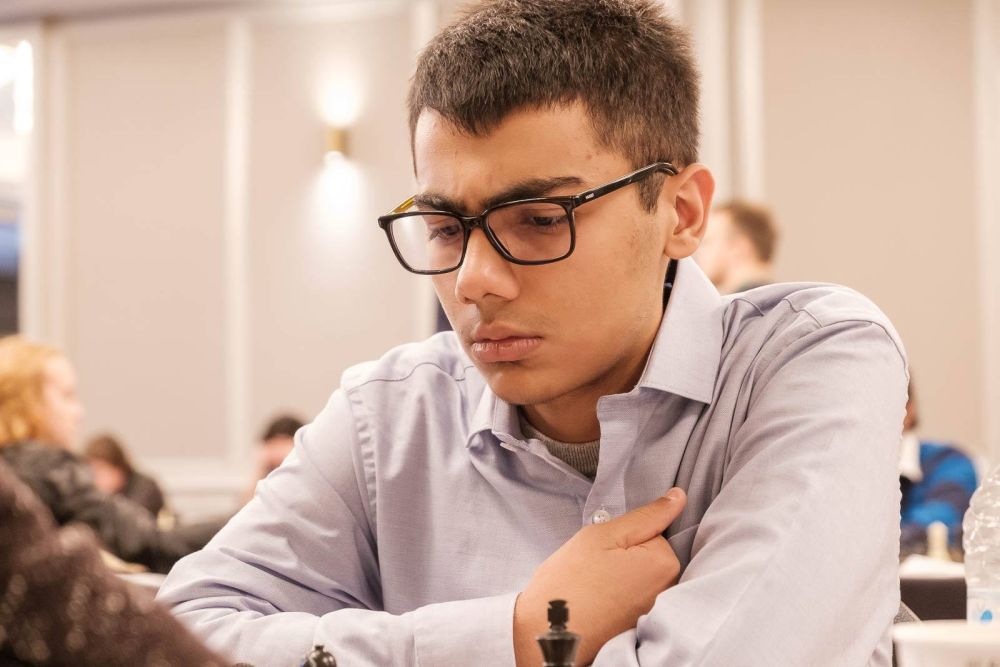 Prithu Gupta registered a much needed win in round four after losing three games in a row | Photo: John Saunders 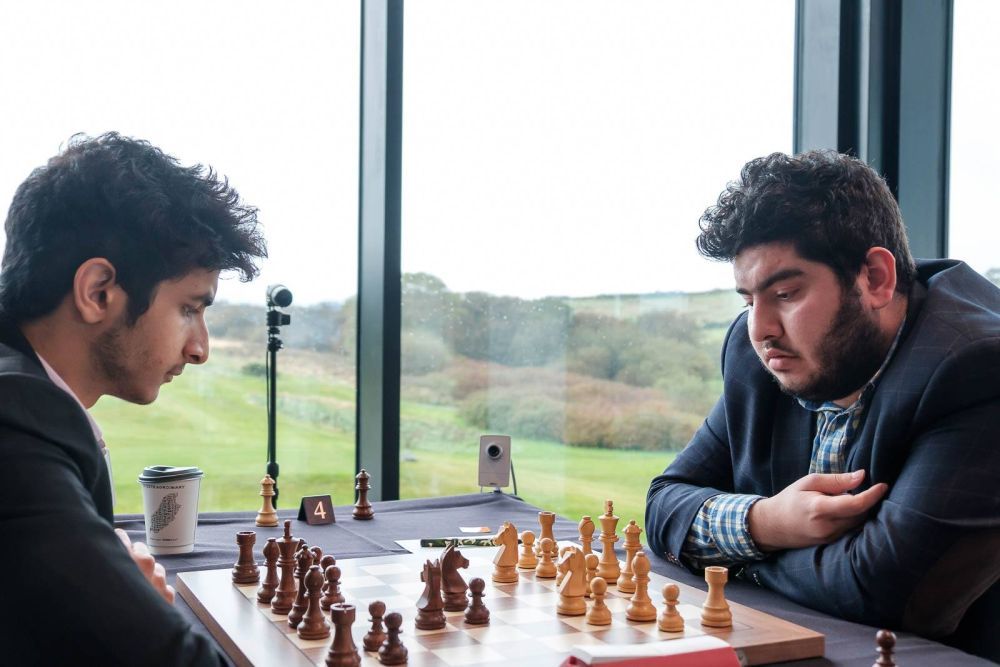 Vidit had the black pieces against the current World Junior Champion Parham Maghsoodloo. After a miscalculation in the middlegame, the Indian Grandmaster ended up in a position with weak pawn structure. Maghsoodloo exploited this with precise play to clinch the full point and emerge as one of the leaders of the event | Photo: John Saunders 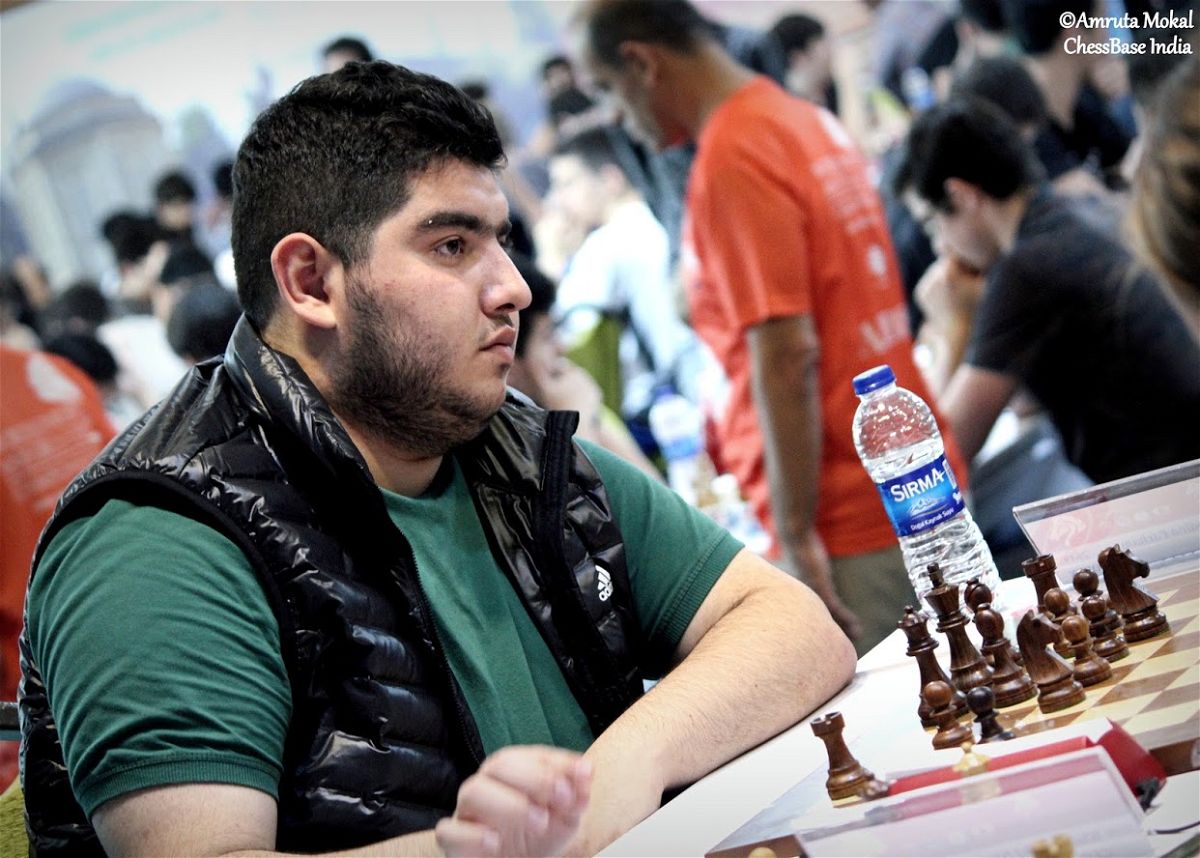 Although the 19-year-old Iranian talent is not able to don his lucky jacket in this event but that, as we can see, is not stopping him from winning games! | Photo: Amruta Mokal 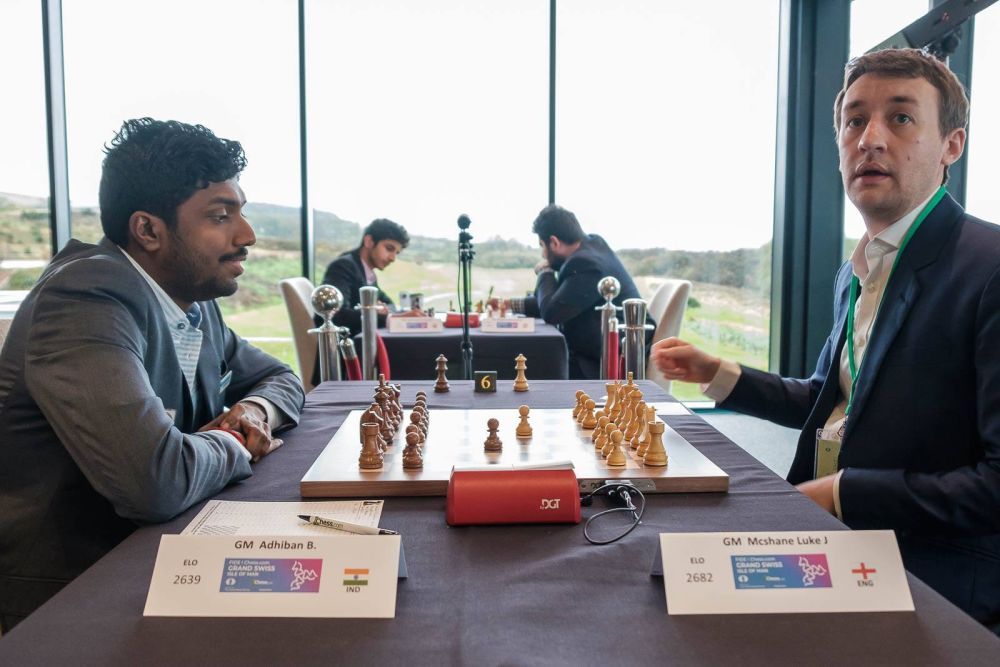 Adhiban Baskaran too had tough luck facing Luke McShane with black pieces. The English Grandmaster played some really sublime chess sacrificing a pawn in the middlegame to open up the center and then breaching the seventh rank | Photo: John Saunders 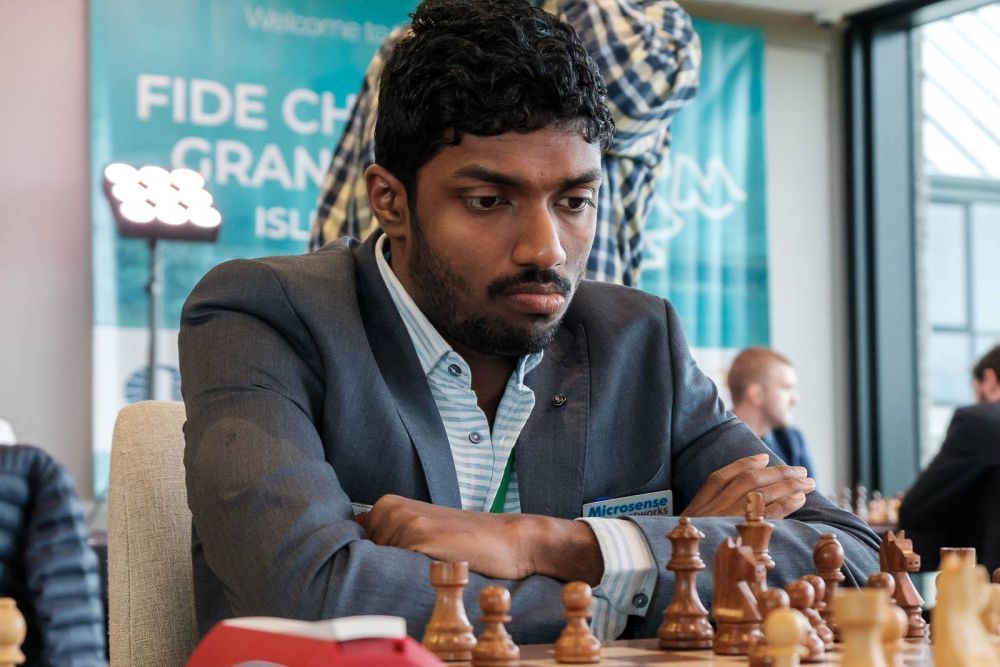 Adhiban has slipped to the 23rd place after this defeat and faces GM David Howell in the next round | Photo: John Saunders 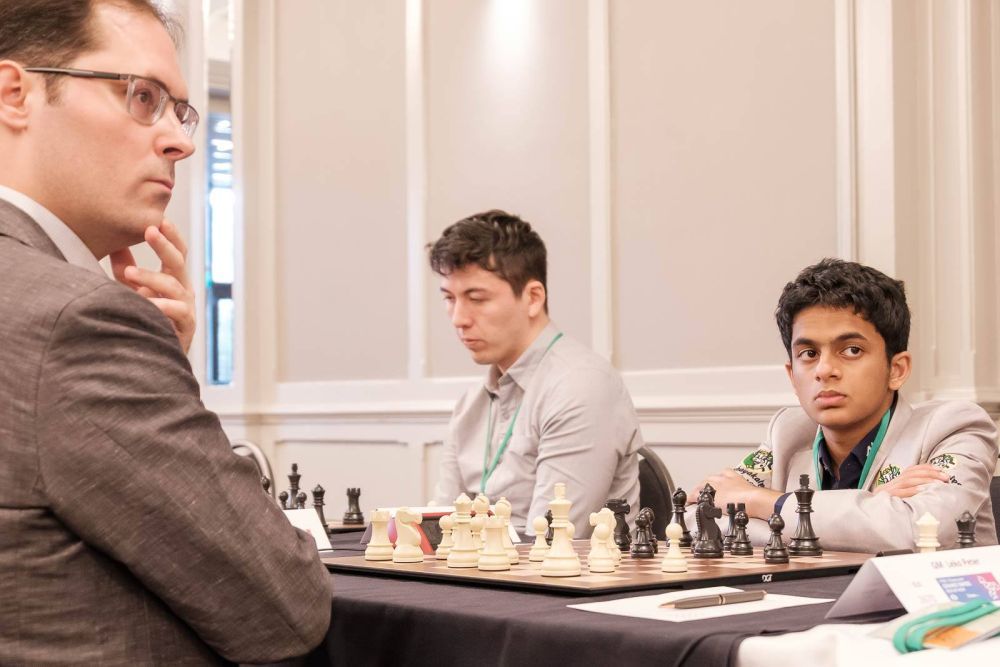 Nihal Sarin couldn't hold his own either against Peter Leko of Hungary. The two-time World Championship Candidate had the 15-year-old Indian boxed in right from the beginning until finally he yielded on move 38 | Photo: John Saunders 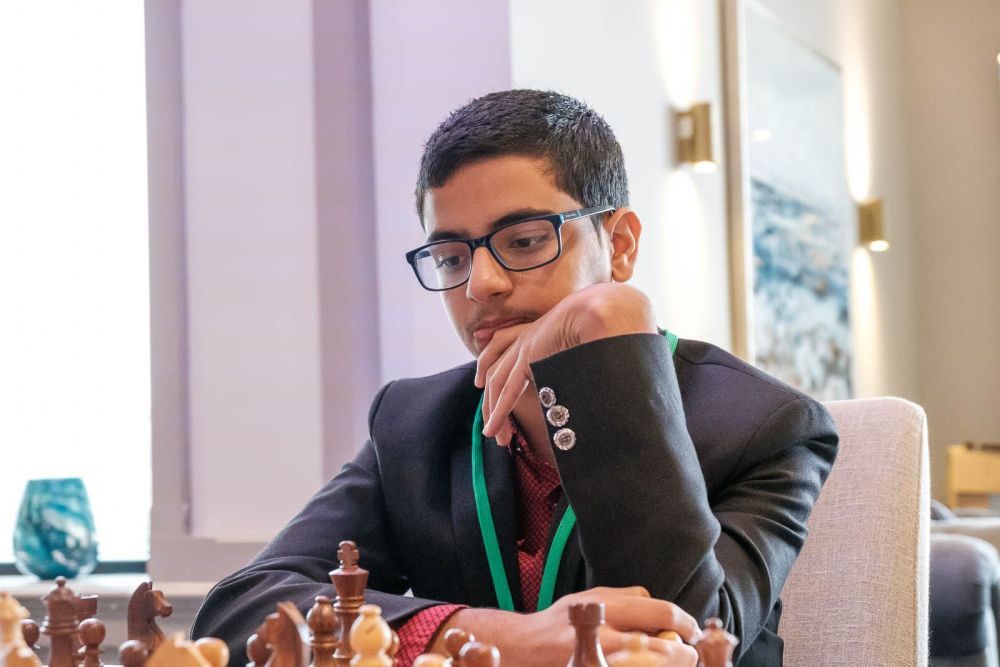 Raunak Sadhwani had, at one moment, an inferior position against Ivan Saric but the 13-year-old youngster defended well to force the split of point | Photo: John Saunders 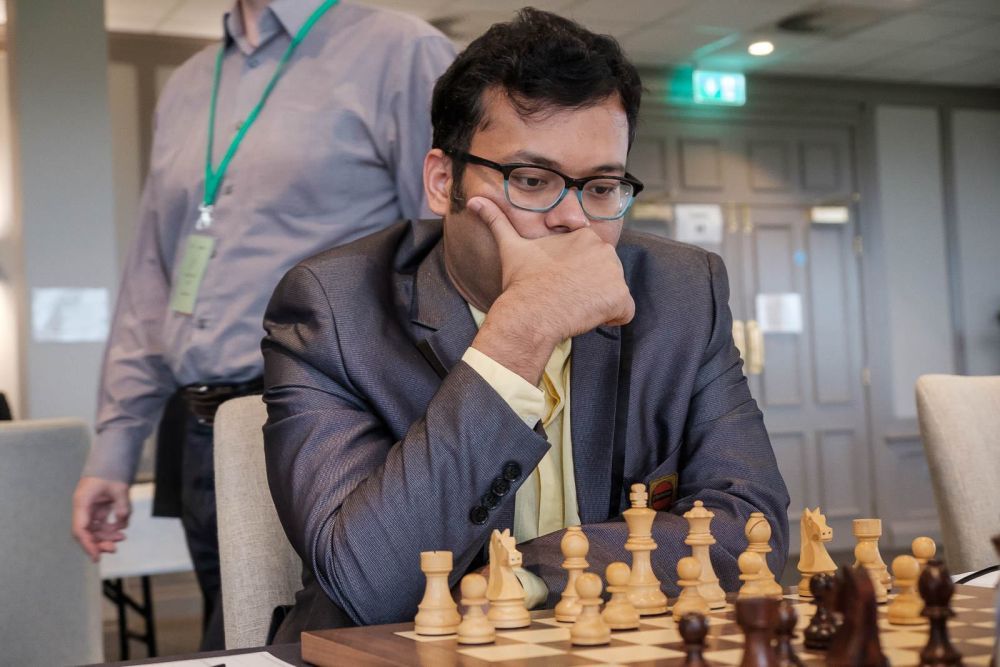 Surya Sekhar Ganguly has remained unbeaten in the event so far. In round four he drew the strong Chinese Grandmaster Yu Yangyi | Photo: John Saunders 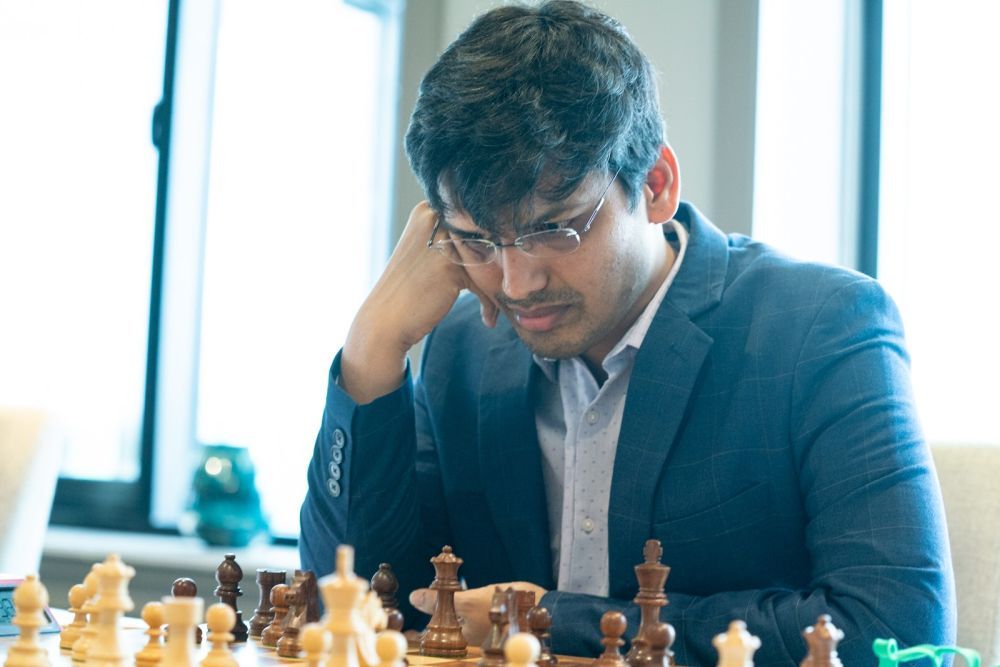 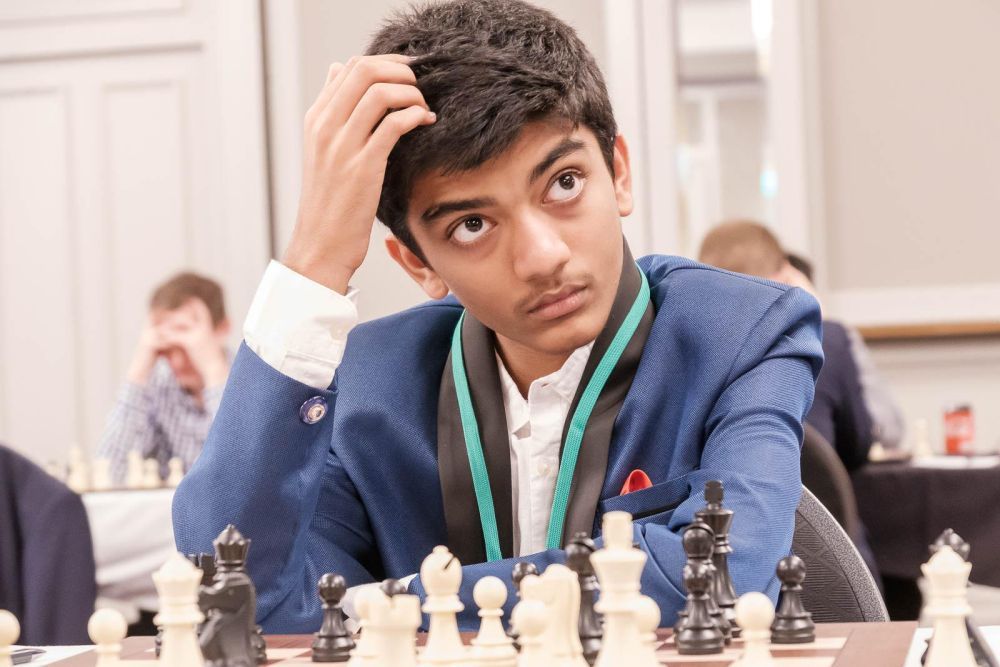 Gukesh D too held the experienced English player Gawain Jones to a draw. Along with him S.L.Narayanan, Abhimanyu Puranik, Harika Dronavalli, and Soumya Swaminathan too drew their games against their higher rated opponents | Photo: John Saunders

The big game of round five! 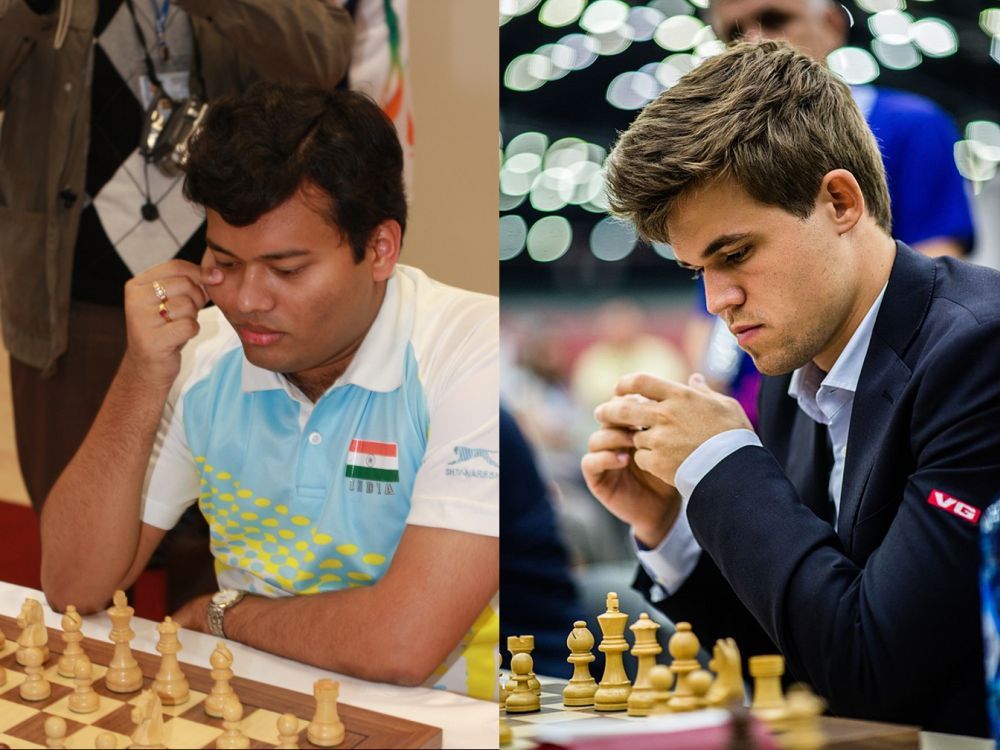 The World Champion Magnus Carlsen has been paired up against Surya Sekhar Ganguly in the next round. This is surely the most anticipated encounter of round five | Photo: Wikipedia

Results of all Indian players (Round 4)

Results of top ten boards (Round 4)

Top ten pairings for the next round