Last month FIDE announced about 1st FIDE Online World Corporate Chess Championship which will take place between 19th and 21st February 2021 on online platform chess.com. The schedule has been kept in such a way so that no one misses any of their work. The tournament has no registration fees. However, teams, companies and fans are encouraged to donate to a charitable cause such as the Chess Veterans Support program and/or the Chess in Education program for kids. ALOK, LIC and TCS are the Indian teams among the provisional teams list along with American Express, Autodesk, facebook, Morgan Stanley to name a few. Registration deadline is 6th February 2021. Photo: FIDE

On behalf of the International Chess Federation, I would like to welcome you to the first official World Corporate Chess Championship, which will be played ONLINE on February 19-21, 2021, and broadcast live on Chess.com.

Sports activities promote team building, fostering a sense of connectivity between employees and contributing to a positive workplace environment. In the case of a corporate chess tournament, your employees will also be training useful skills like decision making, creative thinking, and the ability to calculate a few moves ahead. All this in a competitive but fun environment.

Participants will compete for the FIDE Online World Corporate Chess Champion title, but all participating teams contributing to two FIDE social programs have the opportunity to be awarded a truly special prize: the once in a lifetime opportunity to attend the forthcoming World Chess Championship match, to be held in the frame of the Dubai World Expo 2021. You can be a part of one of the most prestigious sporting events in the world and enjoy the exclusive experience of meeting some of the brightest minds on the planet.

We believe this is also a chance for the participating companies and their executives to reach new clients and business opportunities through sport and develop contacts with leaders and representatives of national and multinational businesses.

Make a smart move, and join us in this celebration of intelligence. 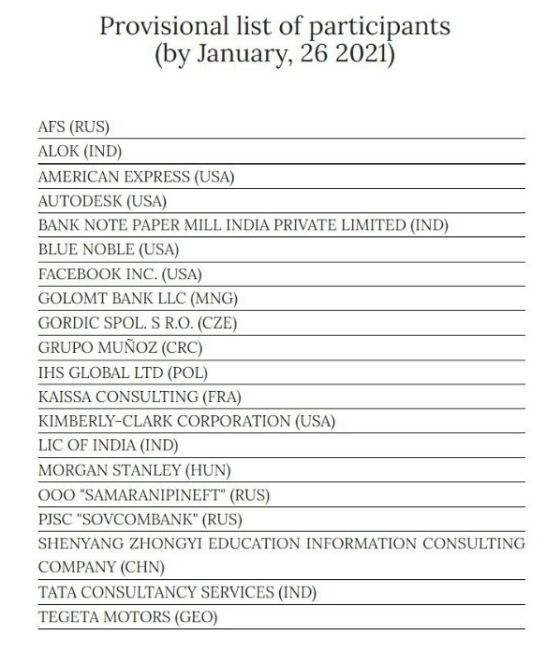 ALOK, LIC and TCS are the Indian teams among the provisional teams list | Photo: FIDE 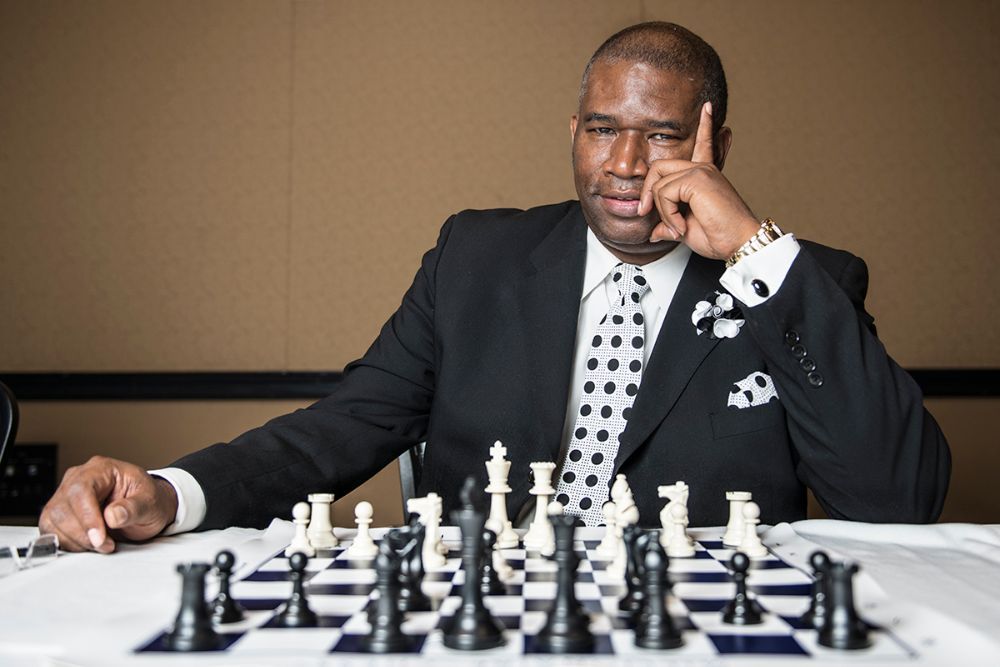 Is yours the smartest company in the world?

Chess is often considered to be the paradigm of intelligence in general, and of strategy in particular. All kinds of brands all over the world have used this age-old game as a catchword, and advertising creatives often resort to the symbolism of chess to associate their customers with these concepts.

Taking part in this event would project a positive image of your company: winning it would give you the aura of the smartest company in the world. 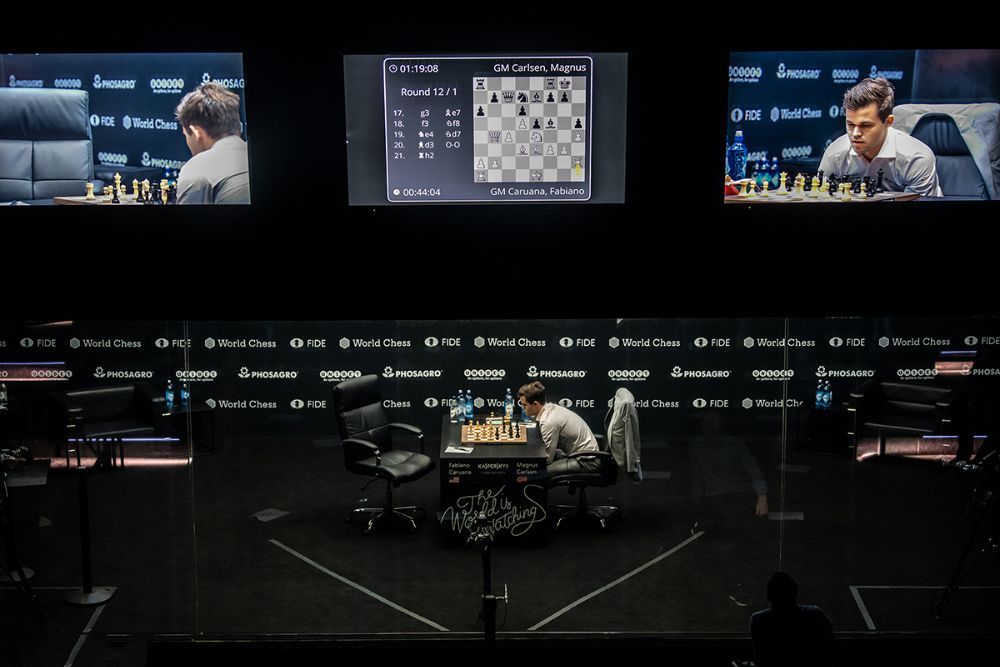 Did you know that chess was the first sport in the world to establish the figure of a World Champion?

The winning team will be declared FIDE Online World Corporate Chess Champion, while the first four teams in the final ranking secure four seats each to participate in an online simultaneous chess game against the Challenger for the FIDE World Chess Champion title.

Additionally, four players from each of the four highest-ranked teams not qualified for the Play-Off Stage of the 1st FIDE Online World Corporate Chess Championship will play an online simultaneous chess game against the FIDE Women’s World Champion, Ju Wenjun.

However, the main prize related to the 1st FIDE Online World Corporate Chess Championship is not related to the actual competition: participating teams, companies, fans and employees of the companies are encouraged to donate to a charitable cause such as the Chess Veterans Support program and/or the Chess in Education programs for kids, which are two existing social programs run by FIDE.

The team (four players) which raises the most funds for those charity causes will be invited to the FIDE World Championship Match 2021, taking place at Dubai World Expo in late 2021, with accommodation expenses covered for three nights and VIP tickets to attend three Rounds of the Match. That team will have the chance to see the reigning World Champion, Magnus Carlsen, live in action defending his title for the fourth time (his opponent, the Challenger, will be determined by the FIDE Candidates Tournament that will be completed in April 2021).

There is no entry fee and no minimum donation necessary to enter this competition, but your generosity towards the aforementioned causes (veterans and chess in education) will be greatly appreciated. 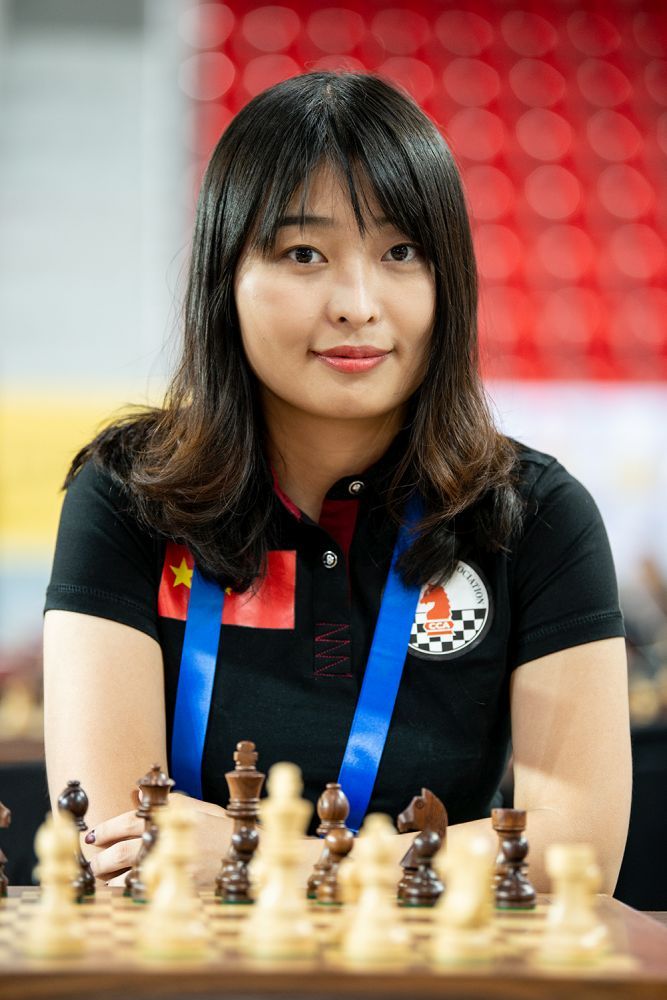 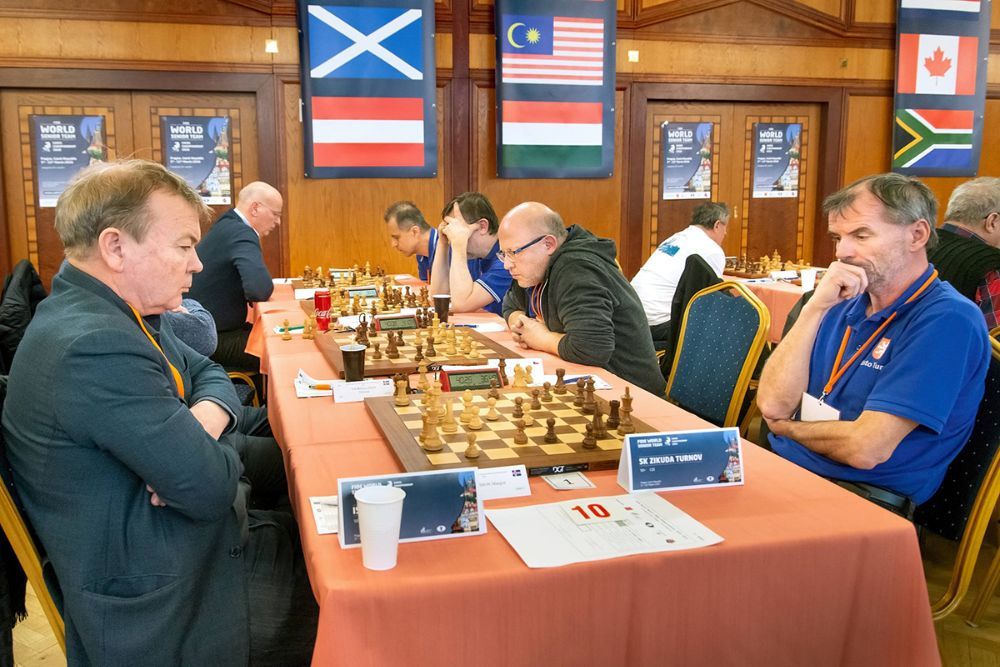 How do teams compete in chess?

This is a team event in which matches are played under a “four against four” format, over four boards.

A team scores one game point for each victory, half a game point for a draw, and no points for a loss. For example: if a match between Team A and Team B finishes with 2 victories and 2 draws the score will be 3-1 for the winning squad.

The games will be played online, on the Chess.com platform. This doesn't require any software installation: participants simply play from their computer browser.

Participant companies are offered the possibility to brand the playing venue and provide a video feed to FIDE/Chess.com, so they get exposure on the official broadcast. Alternatively, the companies can also broadcast the event through their own channels. 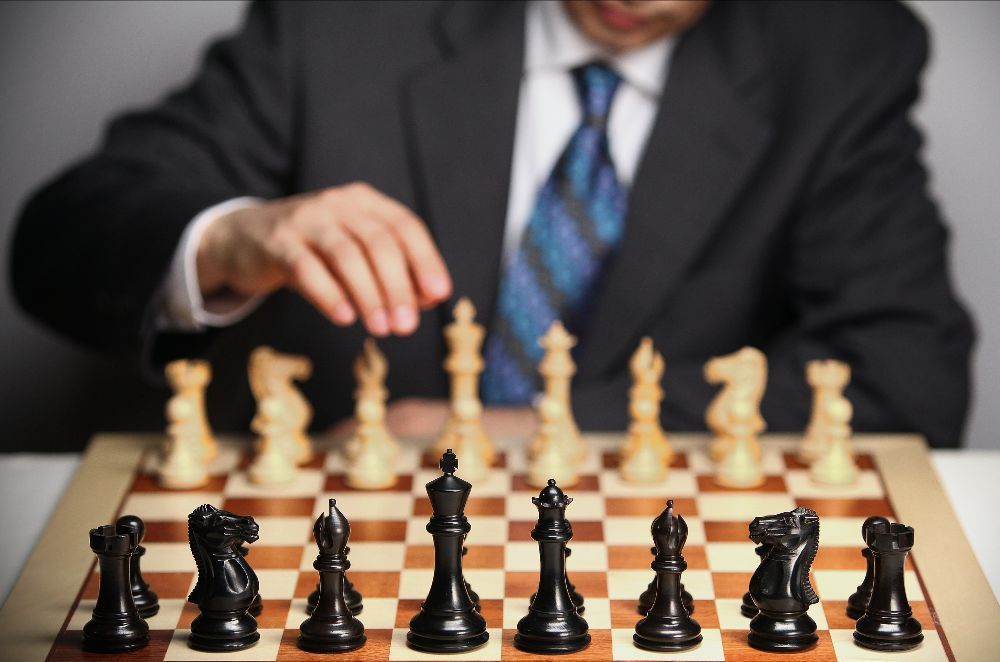 You may be wondering: "do I have enough chess fans in my company?"

A global survey conducted by the polling organization YouGov in 2012 showed that the percentage of adults who play chess occasionally in the UK is 12%, in the USA is 15%, in Germany 23%, and in Russia 43%.

8% of regular chess players are university graduates and chief income earners. Among households with incomes over $120,000, 21% are regular players.

Our suggestion would be that you assign the Human Resources department with the task to find out who many people play chess in the company. They could start from the executive levels, and then go down the different departments. This little research could help your management to identify some hidden talents within the company.

The members of the team must meet the following conditions:

- Only one player of a professional level (with a FIDE rating of +2500) is allowed per team.

- In each team, only one player may be “invited”, all the other players have to be company’s employees.

If you are interested in taking part, you can register your team through this registration form. In case of any question, please contact us at worldcorporate@fide.com 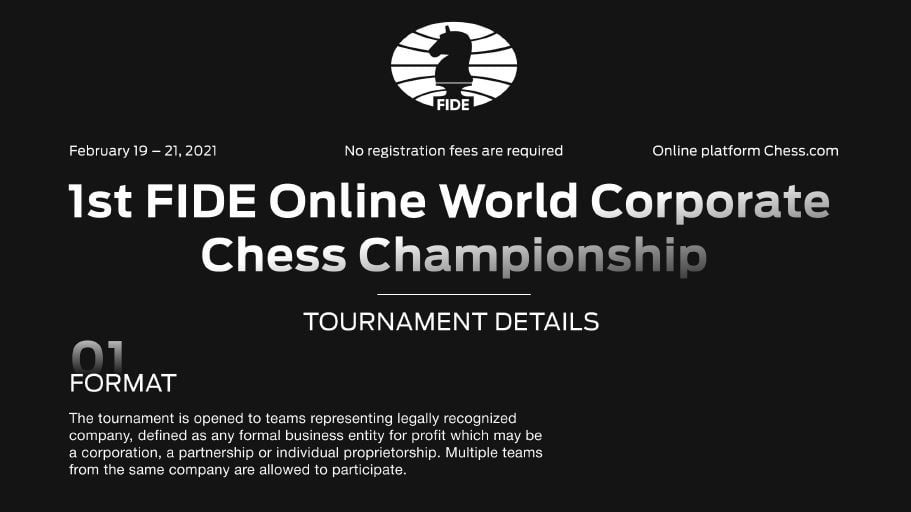 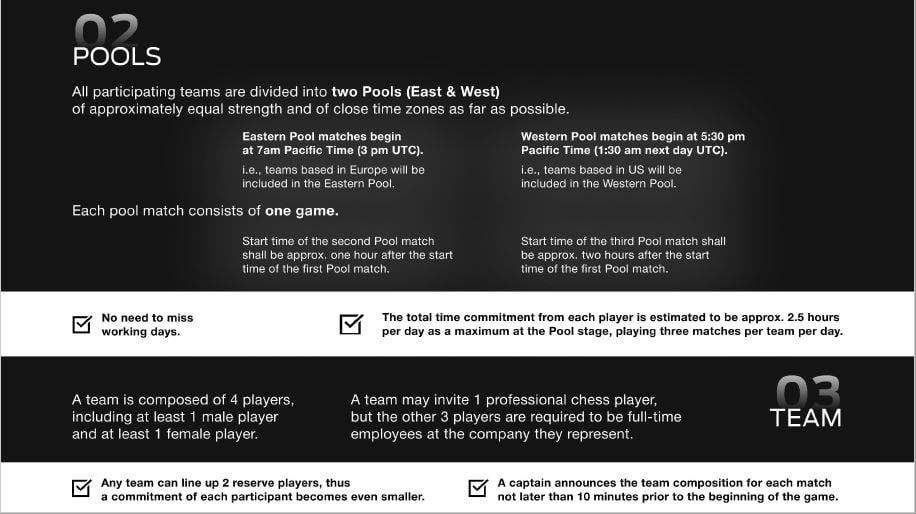 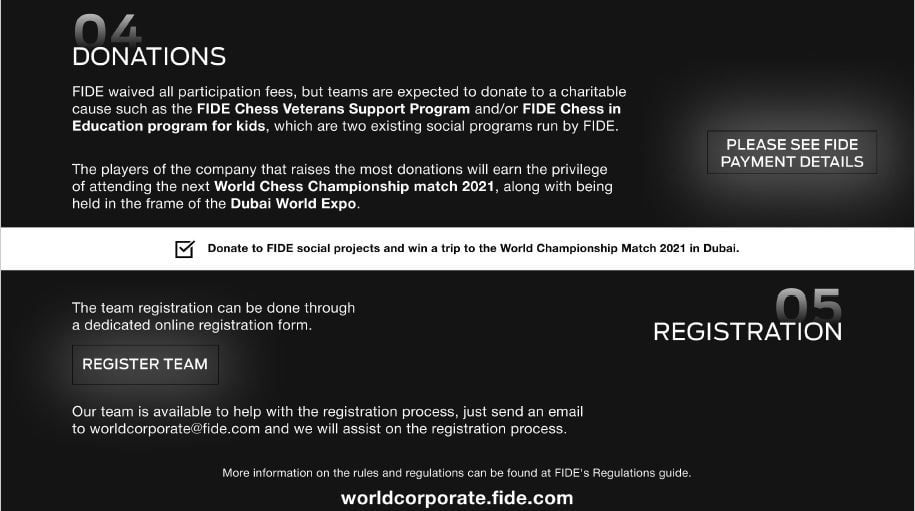 For more details about the tournament, check the links below | Photo: FIDE