The Ding Liren Interview on Candidates 2022

Ding Liren had a very tough start at the Candidates 2022. He lost his first game and then a series of seven draws ensued. With all the work he had done to qualify for the candidates, things were going wrong for him. But the Chinese no.1 is a fighter! The World no.2 started scoring one win after another, ending with a very impressive 8.0/14 and finishing second at the Candidates. We conducted an interview with him, discussing his performance at this elite event and going through the critical positions in each of his games.

Ding Liren had a flight from Madrid in just 2 hours, but agreed to do the interview!

Sagar Shah(SS): Hi Ding, congratulations on a stellar performance at the Candidates! Thank you for taking out the time to do this interview.

Ding Liren(Ding): Thank you! I'm in the hotel right now and will leave Madrid in 2 hours. I am going to Barcelona for a few days, and then I'll return to China.

SS: How was your mindset before the first round? I know it was a very tough journey for you to reach the candidates. Were you tired?

Ding: The first round was a complete disaster for me. I was very tired and didn't get proper rest. My spirits were very low before the round. 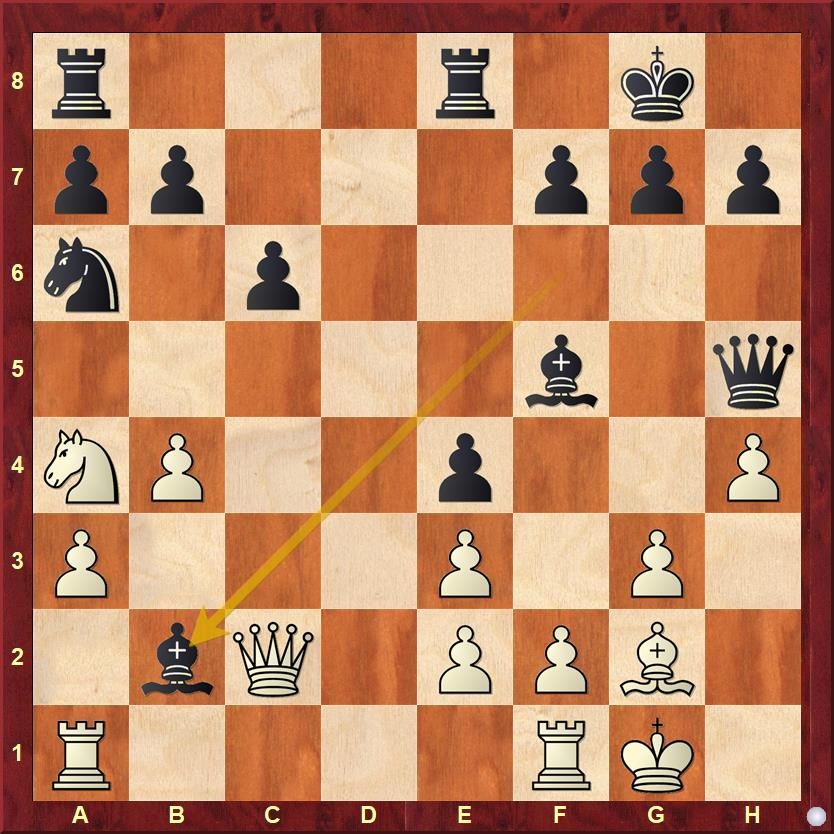 Round 1: Ding Liren vs Ian Nepomniachtchi, position after ...Bxb2

In this position, I played Nxb2 with the idea of rerouting the knight via b2-c4-a5, attacking the b7-pawn. This was not the best idea, Qxb2 would have been a better move as my Knight can still go to c5. I underestimated his attacking chances in the kingside, which cost me the game. 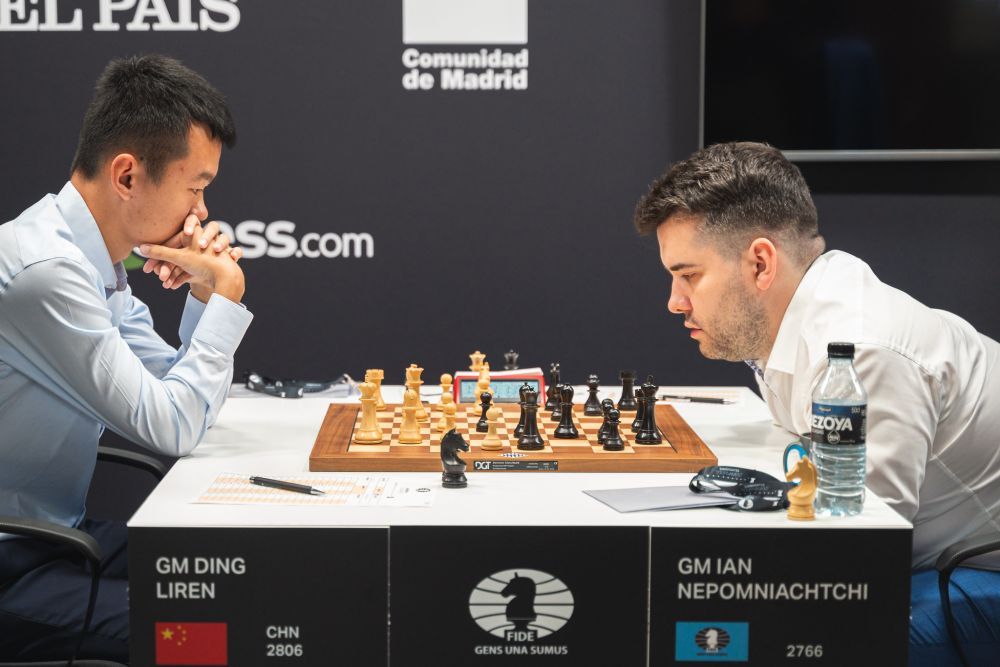 Nepo and Ding deep in thought during their first-round battle.| Photo: FIDE/Stev Bonhage

SS: This win really set up the tournament for Nepomniachtchi. How were your feelings after the game?

Ding: Well, this game turned out to be the most important one at the end of the tournament [smiles]. After this tough loss, I was devastated and I think that affected me for the next couple of rounds.

SS: In round 2 against Duda, you had a very comfortable position with the Black pieces. What did you think of your move ...g5? 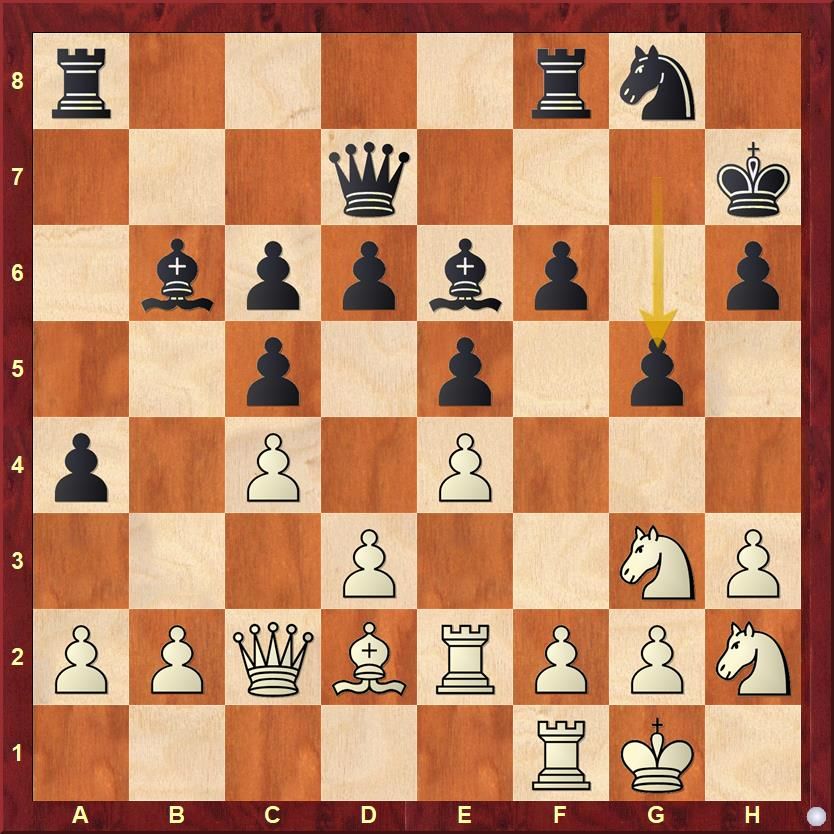 Round 2: Jan-Krzysztof Duda vs Ding Liren, position after ..g5

Ding: ...g5 was a very clear sign that I am afraid of f4. I was not feeling very comfortable about my position and felt that I have to prevent f4 at any cost, knowing that I am weakening the kingside and light squares severely. Instead, ...Ne7 would've been a good move when f4 is simply met with ...exf4 followed by ...Ng6. If anyone is better in the resulting position, it is Black.

SS: In round 3, you were very close to a victory against Rapport. What went wrong in the game? 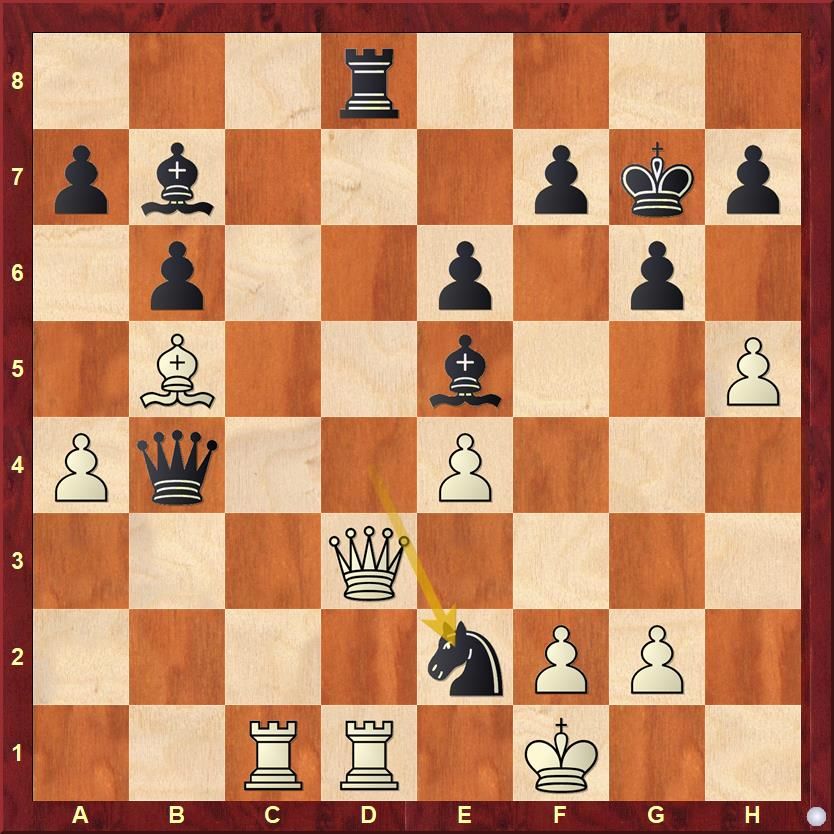 Round 3: Ding Liren vs Richard Rapport, position after ...Ne2

Ding: I made a miscalculation at this point. Qxd8 is the best move in the position, and I calculated Qxd8 Qxe4 Bxe2 Qxg2+ Ke1 Qh1+Bf1 Qe4+, leading to a draw by perpetual. I missed the fact that after Qh1+ White can play Kd2, and it's completely winning! Instead, I played Qxe2? in the game, giving Black chances to hold the game. 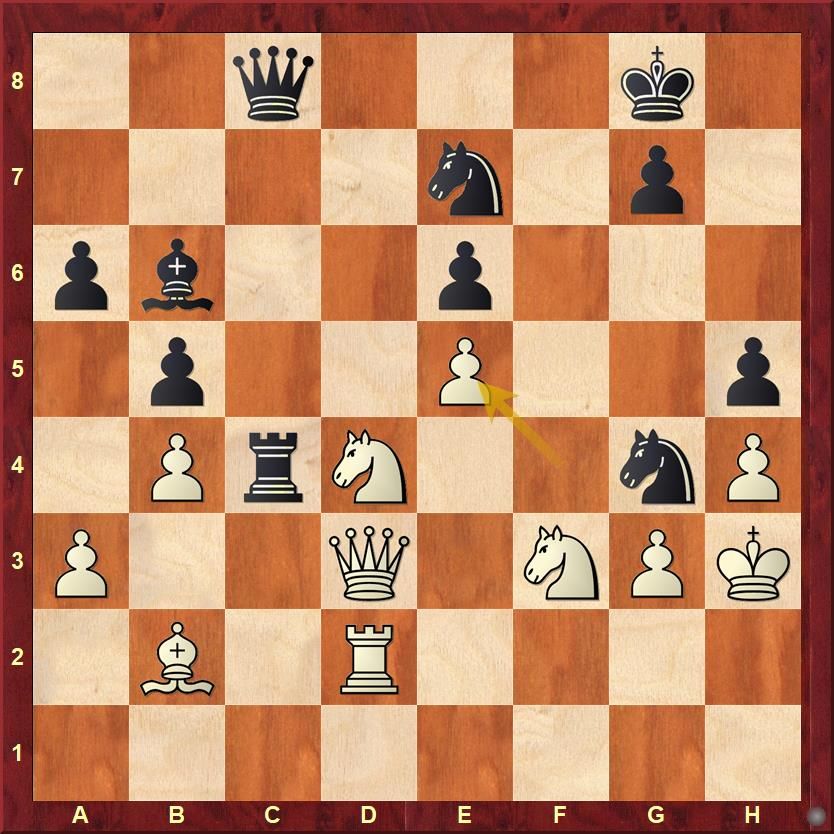 Round 5: Teimour Radjabov vs Ding Liren, position after fxe5

Ding: I did consider it, but I was unsure about 40...Bxd4 41.Bxd4 Nf5 42.Bc5 Qc6 43.Qd8+ Kh7 44.Ng5+ Kg6. This is winning, but during the game, I was not so confident about my calculation. I was worried that if I miss something, it'll be a very quick loss. Trying to be cautious and win the game without any risks, I played 40...g6. As it turned out, it is too slow and Radjabov got the counterplay right on time to hold a draw.

Ding was very close to winning against Radjabov, but a slip on move 40 stole his half-point. | Photo: FIDE/Stev Bonhage.

SS: Against Nakamura on round 6, you basically navigated his entire prep over the board. How was your preparation for this game?

Ding: My preparation was not that deep. There's a funny story regarding this game's opening, Anish Giri has actually played this before! 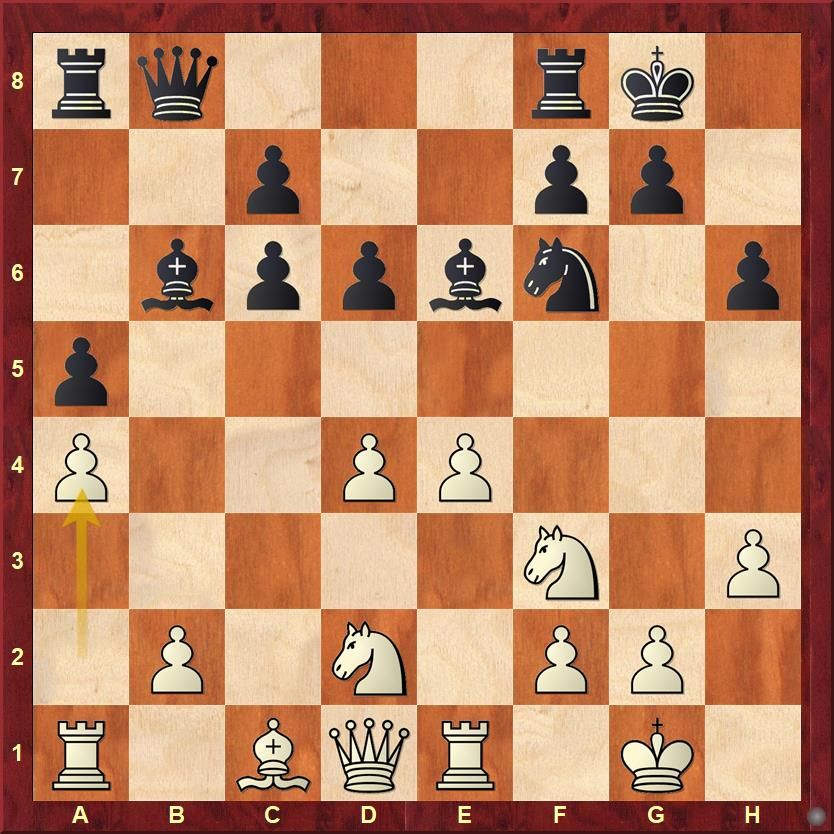 Round 6: Hikaru Nakamura vs Ding Liren, position after a4.

This a4 followed by Ra3 idea was played by Anish against David Anton Guijarro, and he won the game. The day after Anish played this game (2019), Anish messaged me this game on Wechat saying "Ding, this is for you". Because I had helped him to qualify for the Candidates 2020 by finishing 2nd in the World Cup. Anish got the rating spot.[smiling]. As it turned out, Hikaru was even better prepared than me in this line. He was blitzing out all the moves, and the game ended in a draw.

SS: In round 9 against Duda, you got that long-coveted win. Where did you think Duda went wrong? 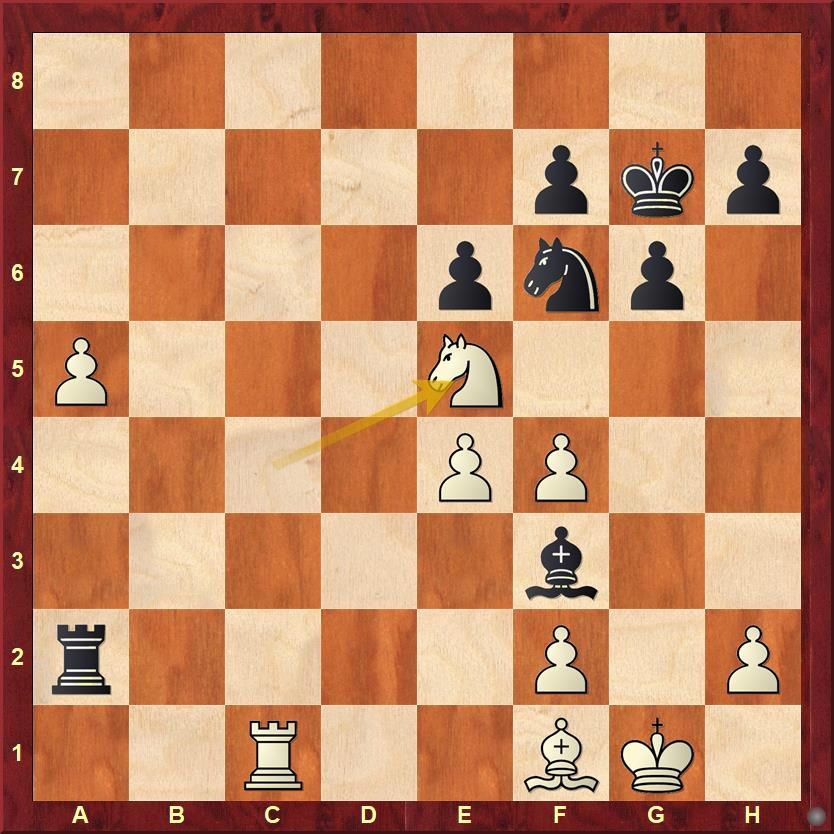 Round 9: Ding Liren vs Jan-Krzysztof Duda, position after Ne5

Ding: In this position, Duda's ...Bxe4 was the decisive error as I can infiltrate now with Rc7 and win the f7-pawn. The best defense for Duda would've been to play ...Bh5, but he brought the bishop in f3 to control the h1-a8 long diagonal. Going back with ...Bh5 is not a human move.

The conversion was not that easy for Ding, but he managed to find all the correct moves and bring his king in at the right time to support the passed a-pawn.

SS: You continued your winning streak in round 10 with a scintillating victory over Rapport. Was this your favorite game of the tournament?

Ding: Yes, I think so [smiles]. In this game, I was at some point overconfident [laughs]. In some position, I thought I was winning and I need to find the forced line, but the position was only slightly better for me at that point. And in the end, when I was ready to settle for a draw, it turns out that the endgame is just winning for me. 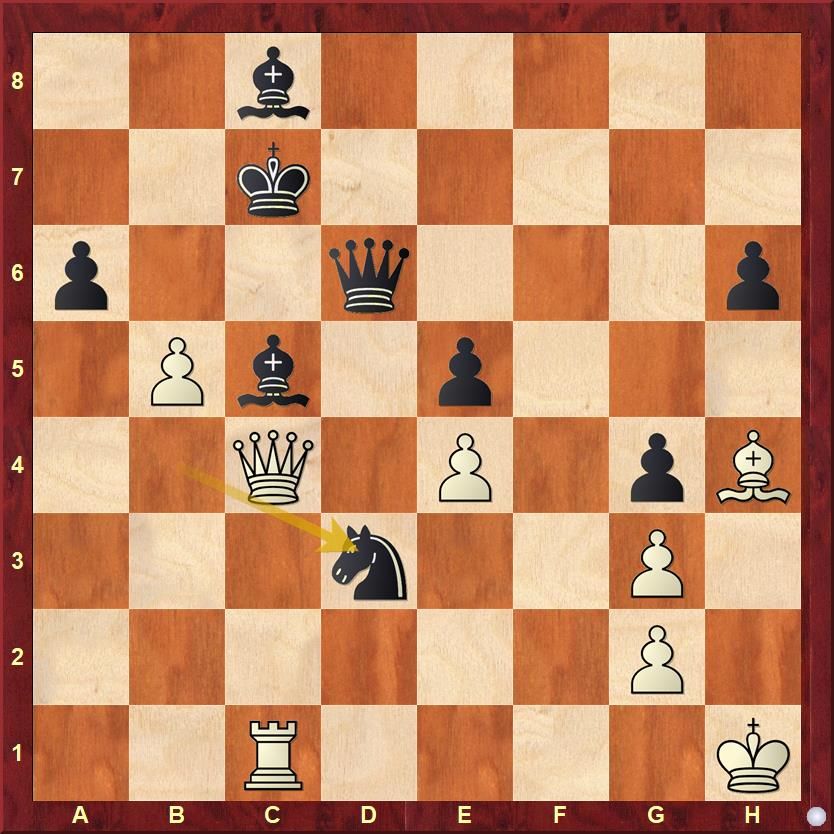 Round 10: Richard Rapport vs Ding Liren, position after ...Nd3

In this position, Be7 was the only move to hold, forcing a trade of pieces. But Rapport went for Rc3 and now ...axb5 just wins. Rapport's king is completely cut off and none of his pawns are moving, so Ding's bishop pair and passed pawns proved much stronger than Richard's rook and bishop. 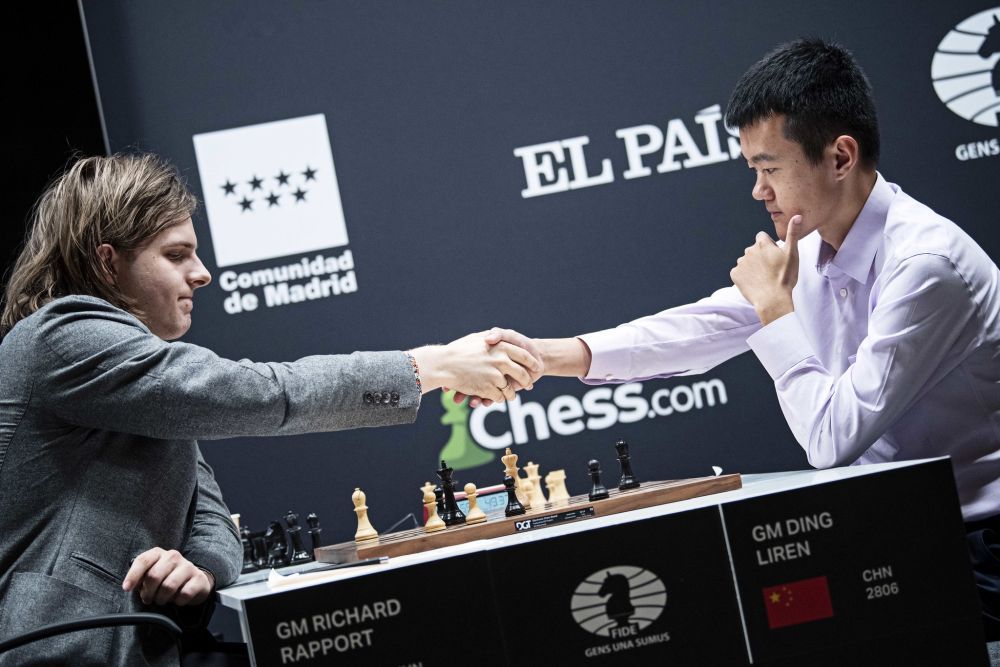 SS: Against Fabiano in Round 11, you were worse for a long time, but managed to turn around the position in your favor. Where did you think the tables turned? 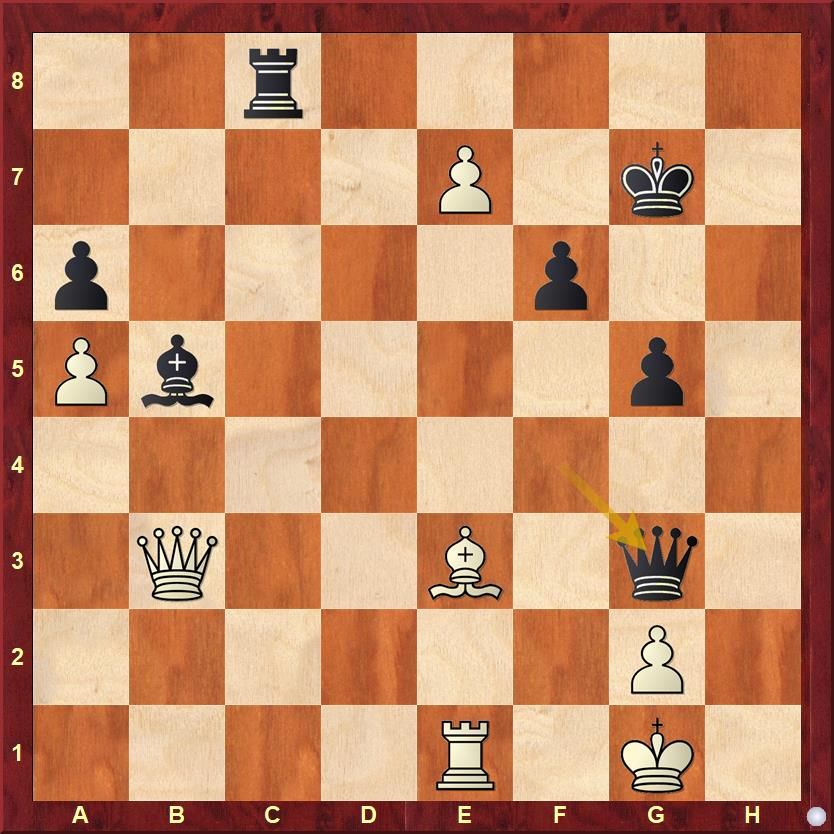 Round 11: Fabiano Caruana vs Ding Liren, position after ...Qg3

Ding: I had to find a lot of resources and only moves to stay in the game. In this position, I think Fabiano missed ...Qg3, now Black is the one who has a slight edge. He started getting a bit nervous at this point, I could see his hand shaking. After trading the queens, I thought I was winning, but that was not the case. Objectively speaking, the position was a draw. But it was practically difficult for Caruana to hold.

SS: You faced Radjabov in round 12. Do you think b5 is already a mistake? 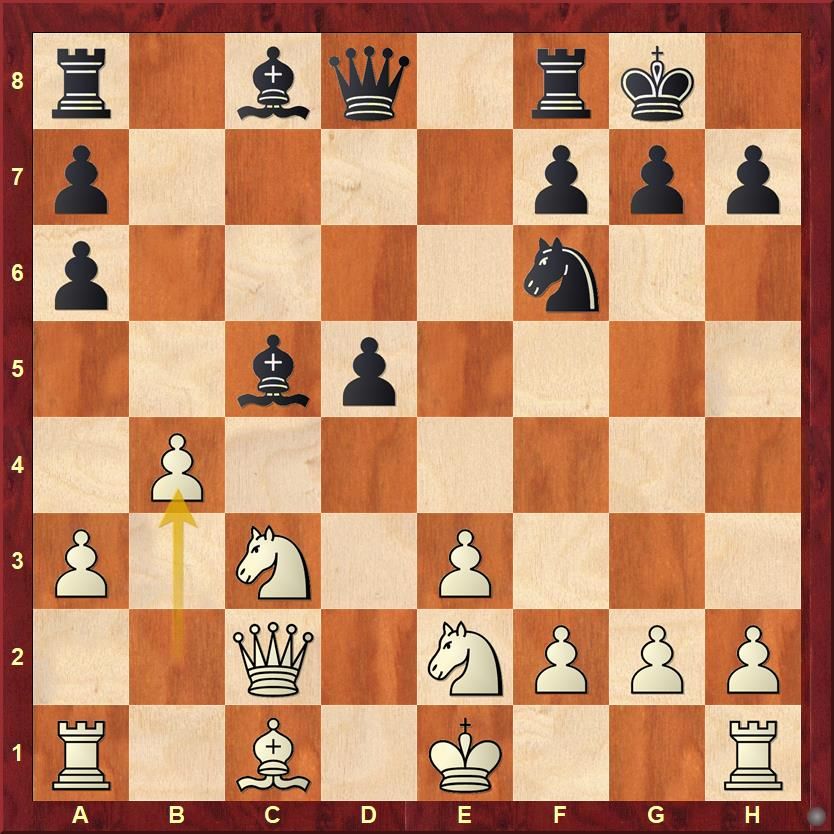 Round 12: Ding Liren vs Teimour Radjabov, position after b5

Ding: Yes, in this position I should've just castled (instead of b4). My position slowly kept getting worse, but I didn't feel that way during the game. Even after playing 21.Qc1, I thought I had an advantage. Only when Radjabov played 21...Rxe3, I discovered I was completely lost. 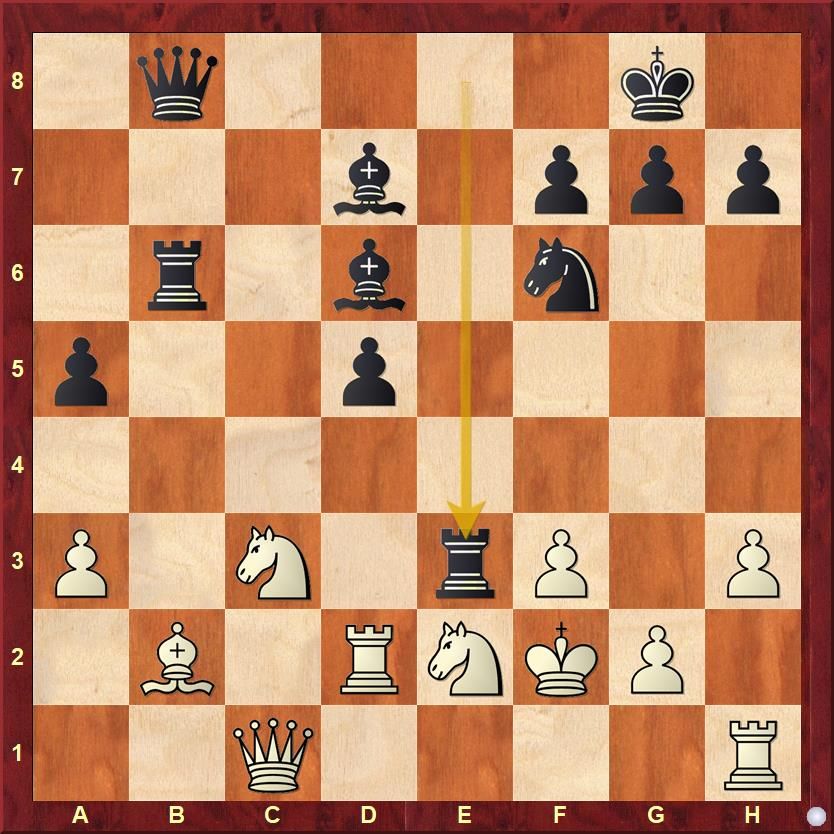 SS: In the interview after this game, you were very calm and collected and mentioned "Chess is fair". Why did you say that?

Ding: In the last game against Fabiano, winning was a completely unexpected result for me. I was defending the whole game, trying to survive. In the end, I suddenly got a chance and managed to win. In this game, I tried too hard to win and ended up losing the game as a result. That's why I said, "Chess is fair". [smiles]

SS: In the last round against Nakamura, you scored a fantastic victory to get to the second position. This was a must-win game for you, how was your mindset before the game?

Ding: I was playing for a win in this game. It was like my game against Duda: if my opponent plays very well then a draw is acceptable, at least I tried. If he doesn't, then I have my winning chances. 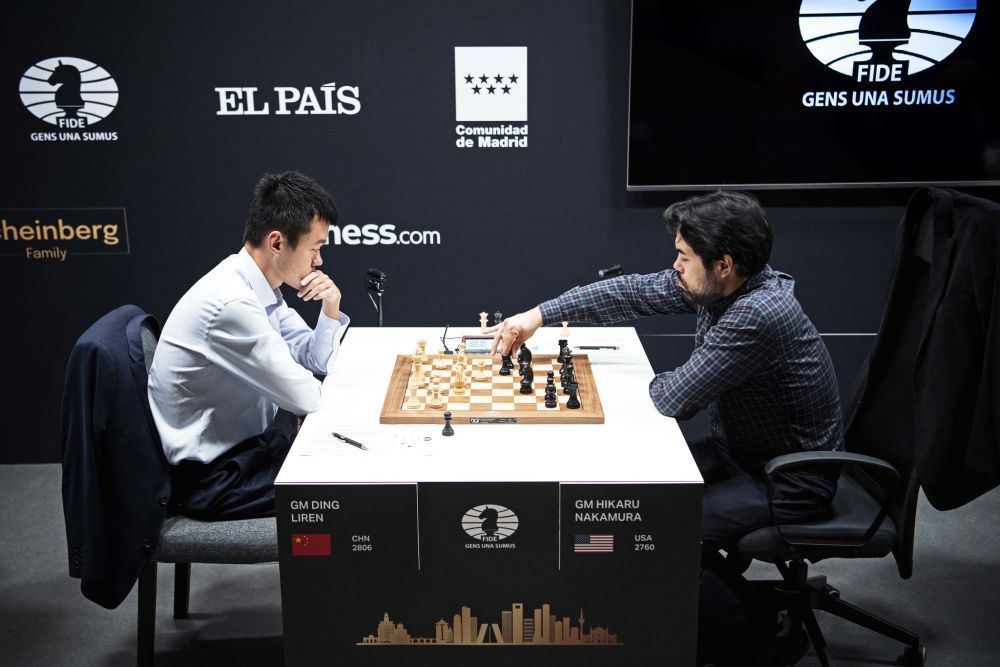 SS: Where do you think Nakamura went wrong? 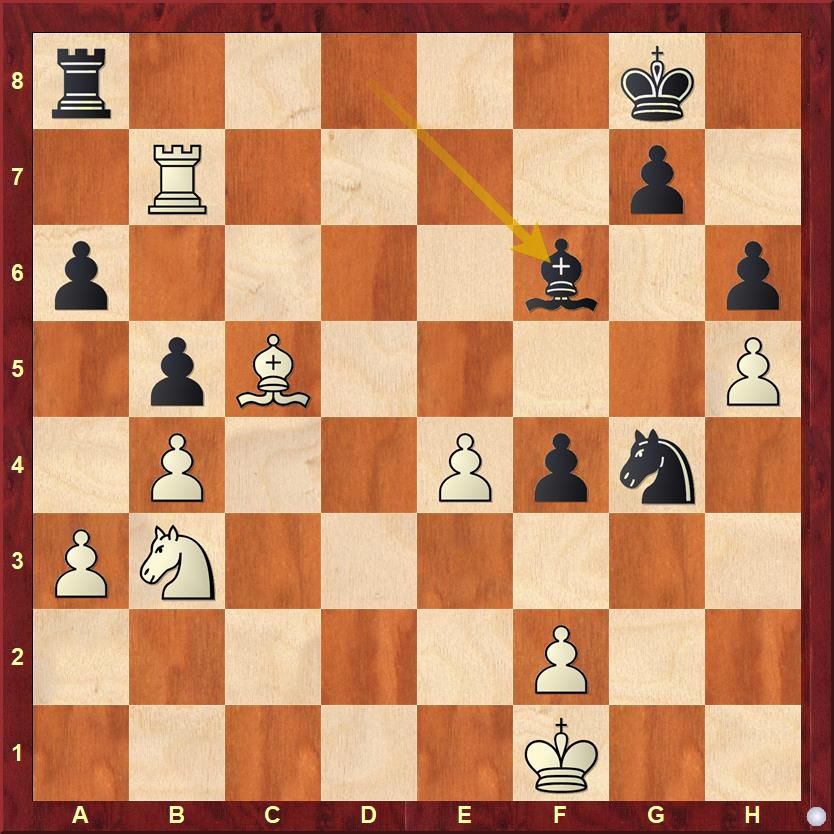 Round 14: Ding Liren vs Hikaru Nakamura, position after ...Bf6.

SS: This is the closest you have come to the World Championship title, right?

Ding: Yes, there's a possibility that I will face Nepomniachtchi for the title if Magnus decides not to defend his title. But I think he will play in the end. For now, we will have to wait and watch. 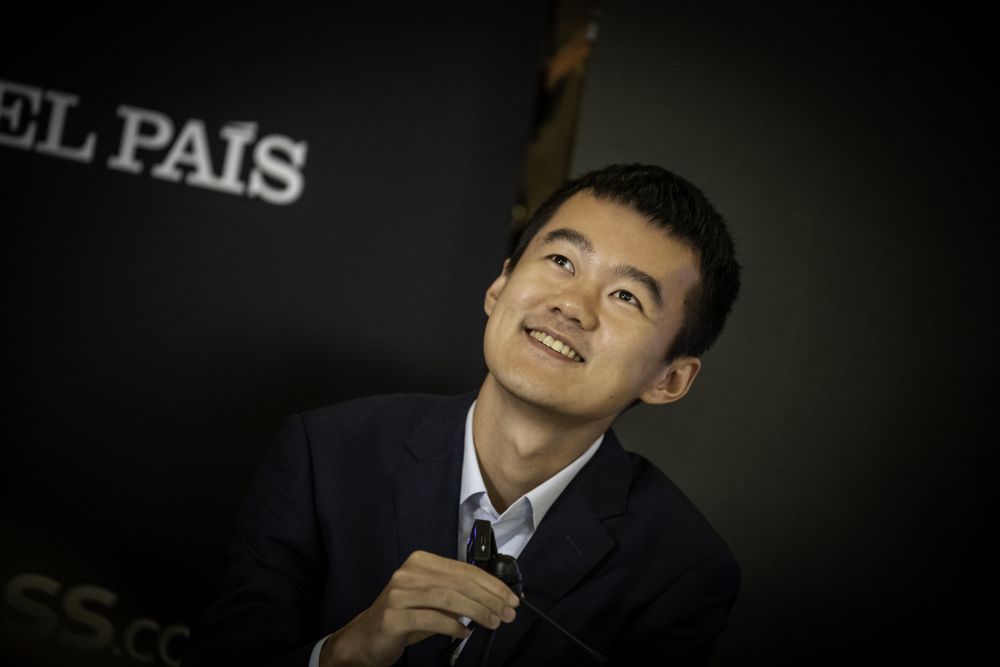 SS: It was a pleasure going over your games. Thank you for your time, Ding!

Ding: Thank you for having me, Sagar. Bye!

Ding Liren's games from Round 1-14