Vidit scored another emphatic victory over Jeffery Xiong to eliminate him and secure his own place in the Round of 16 at FIDE World Cup 2021. The India no.3 has become India no.2 now as Harikrishna drew his must-win game against Tabatabaei and got knocked out. Praggnanandhaa's fantastic debut the World Cup has come to an end as he lost to Vachier-Lagrave. Carlsen misses a win against Wojtaszek and now he will have to play tie-breaks for the first time in this event. Abdusattorov, Ponkratov, Goryachkina and Dzagnidze have made comebacks to force tie-breaks. Round 4 tie-break games start today at 5:30 p.m. IST. Photo: Eric Rosen/FIDE

Harikrishna and Pragg get knocked out

Harikrishna tried to a lot to win his must-win game but unfortunately his opponent Tabatabaei did not give him any chance. Vachier-Lagrave sacrificed his queen and defeated Praggnanandhaa, showing why he is one of the best in the world. Vidit beat Xiong for the second consecutive game to secure his place in the Round of 16. Thus Vidit has now become India no.2 and World no.21 in the live rating list. 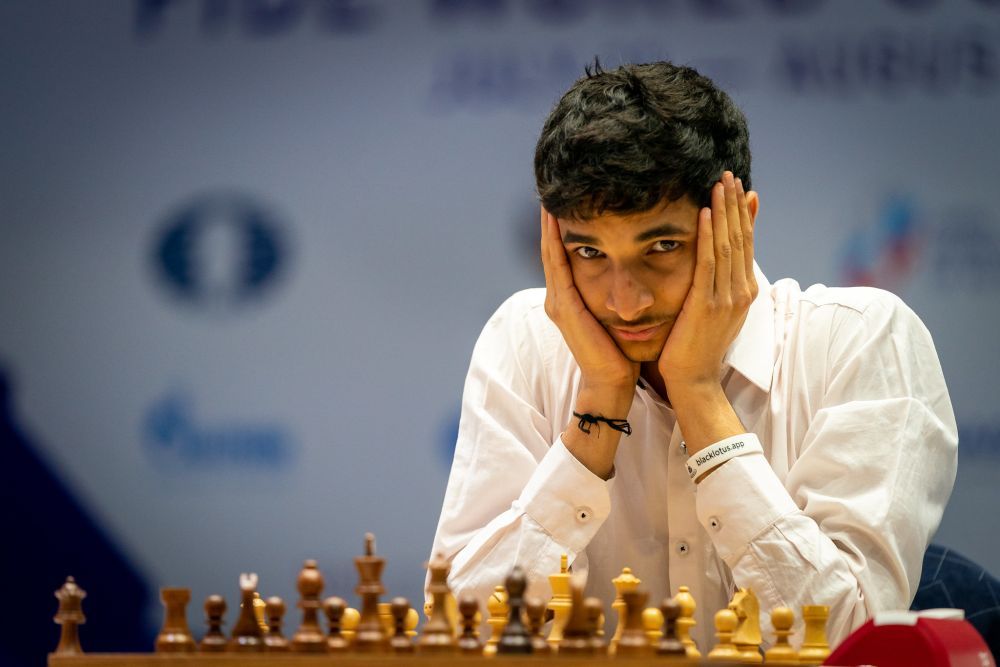 An incorrect break by Praggnanandhaa in the center gave his opponent Vachier-Lagrave the upper hand. 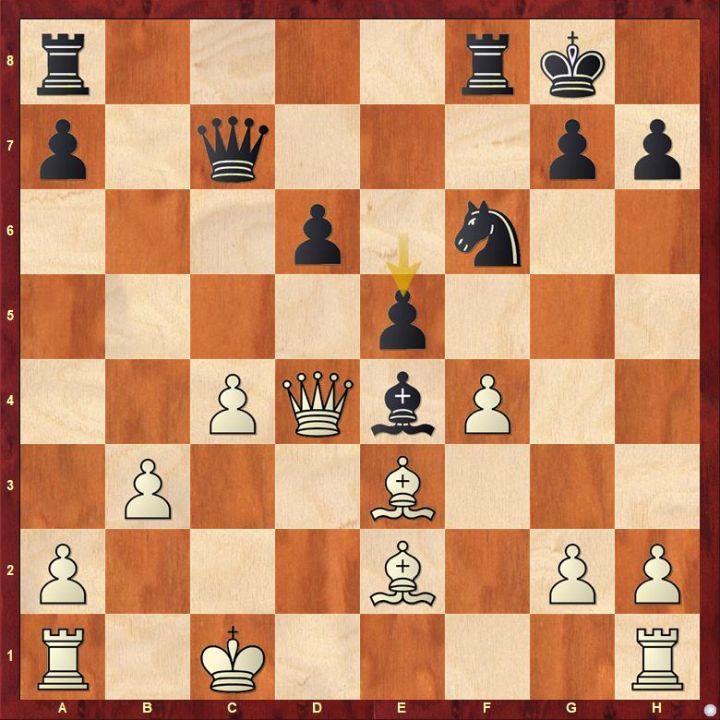 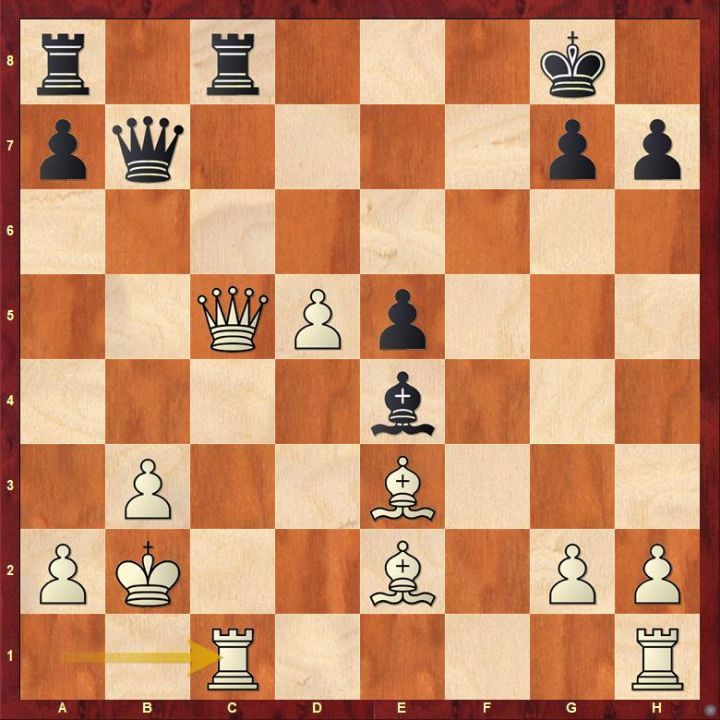 Vachier-Lagrave offered his queen 26.Rac1 and there was not much to go on for Black after 26...Rxc5 27.Rxc5. Thus, Praggnanandhaa's fantastic debut at the FIDE World Cup had come to an end.

Praggnanandhaa got eliminated by one of the best in the world - Maxime Vachier-Lagrave | Photo: Anastasiia Korolkova/FIDE

Harikrishna tried a lot, but there was not much for him to do as his opponent Tabatabaei played solid and did not give any chance.

Harikrishna was eliminated by Iran no.3 Tabatabaei | Photo: Anastasiia Korolkova/FIDE

Jeffery Xiong misjudged Vidit's intencity of his attack on the kingside and he kept playing on the other side of the board. 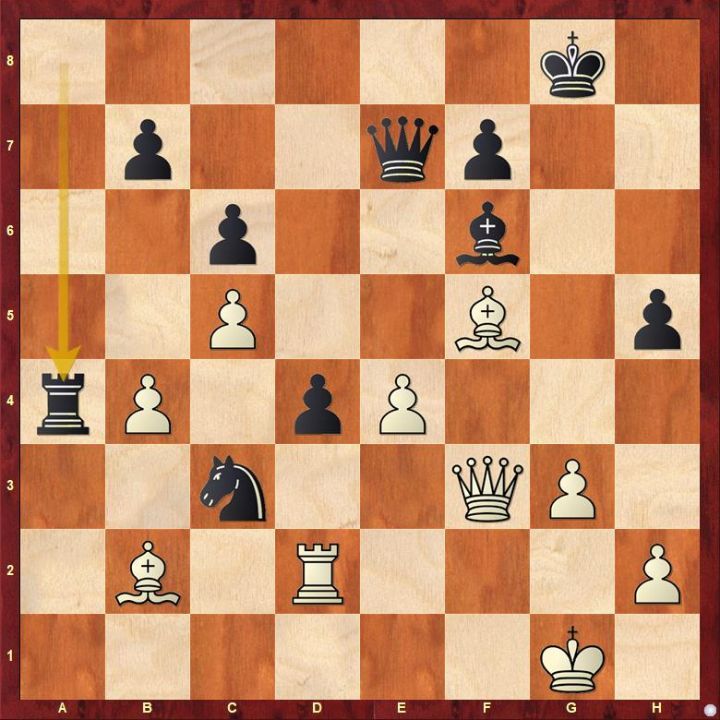 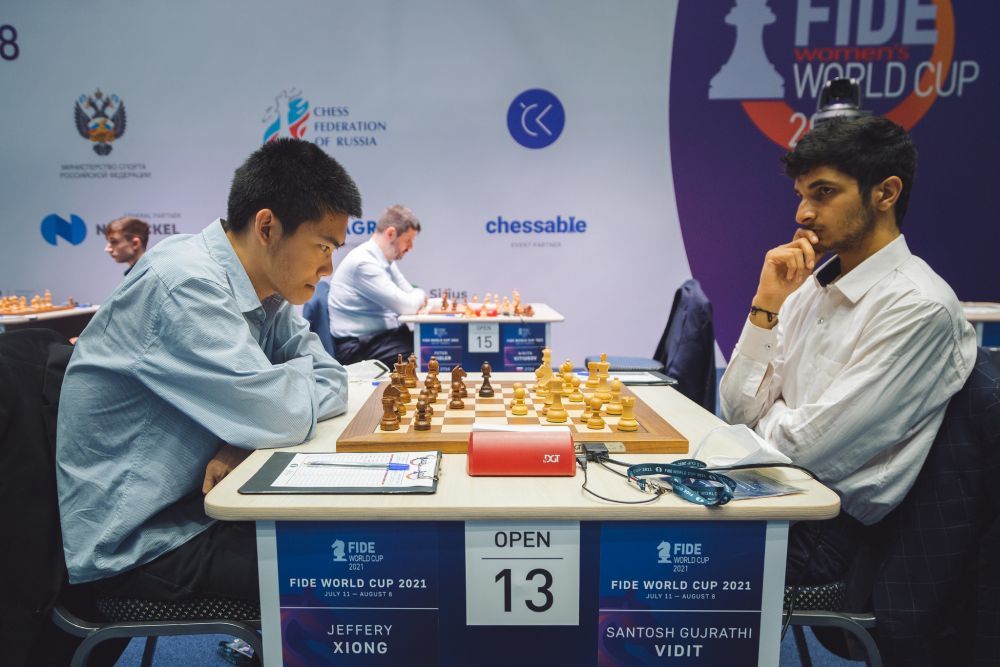 Vidit became one of the two players to win the match 2-0 in Round 4 | Photo: Anastasiia Korolkova/FIDE

Carlsen made his second consecutive draw against Wojtaszek and for the first time he will play tie-breaks in this event. 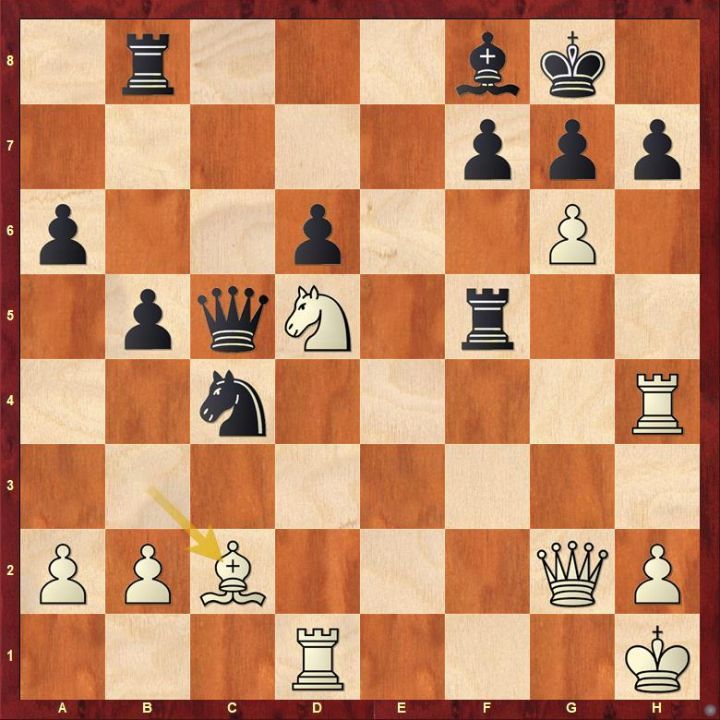 25.Rxh7 was completely winning for White. Unfortunately for the world champion, he opted for 25.Bc2 which allowed Black to get back in the game. Find out how. 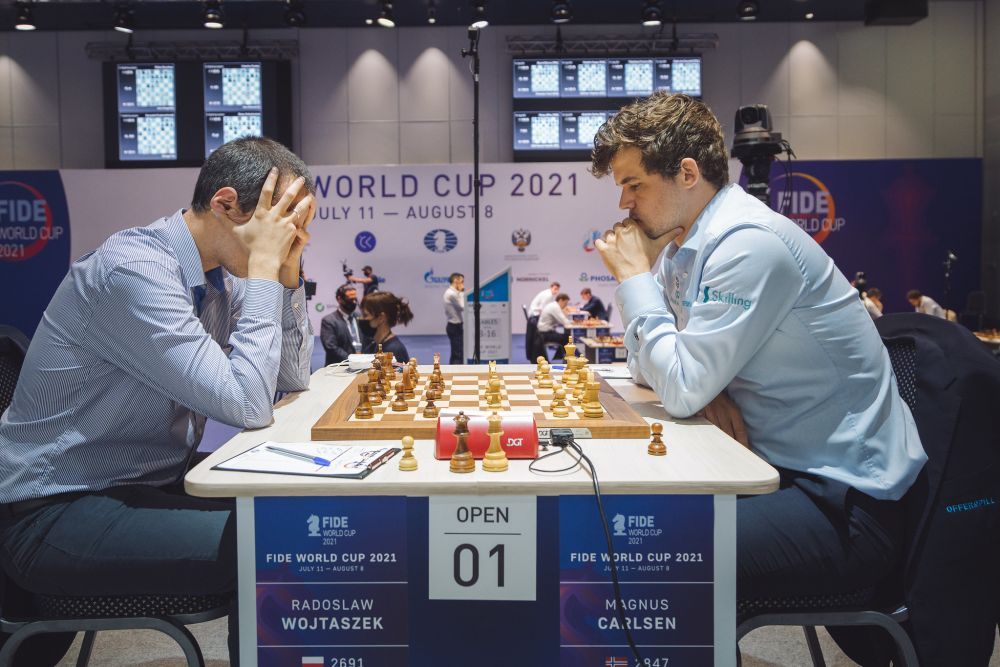 Until this World Cup, Carlsen-Wojtaszek had only two draws against each other | Photo: Anastasiia Korolkova/FIDE

Here are a few interesting finishes from Round 4.2 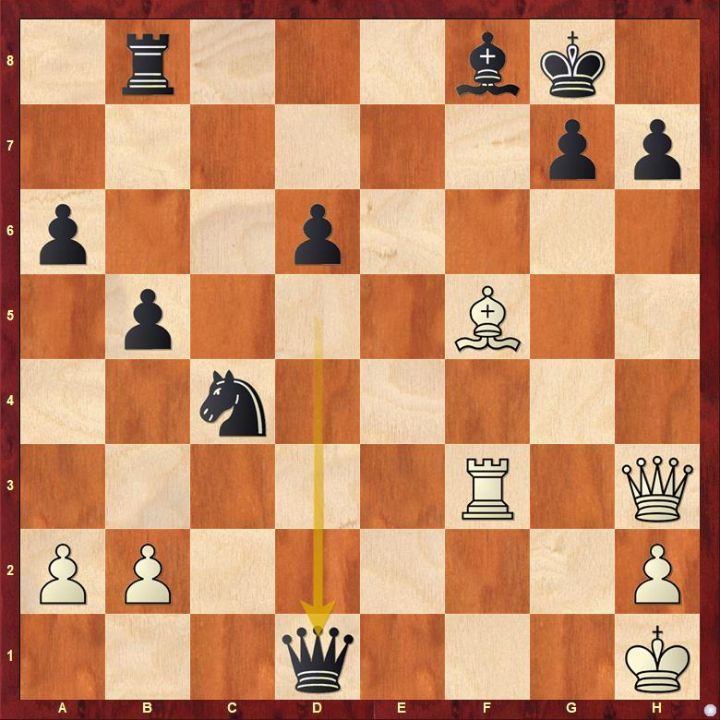 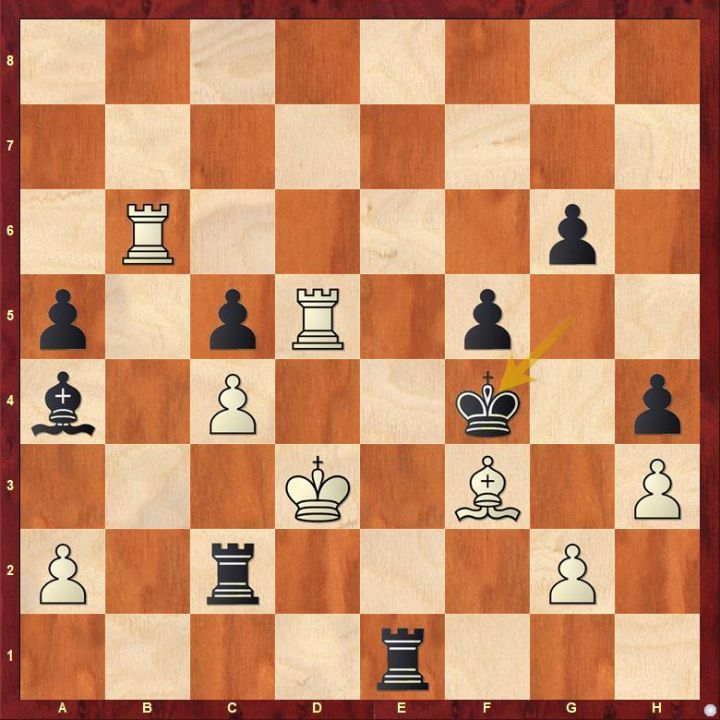 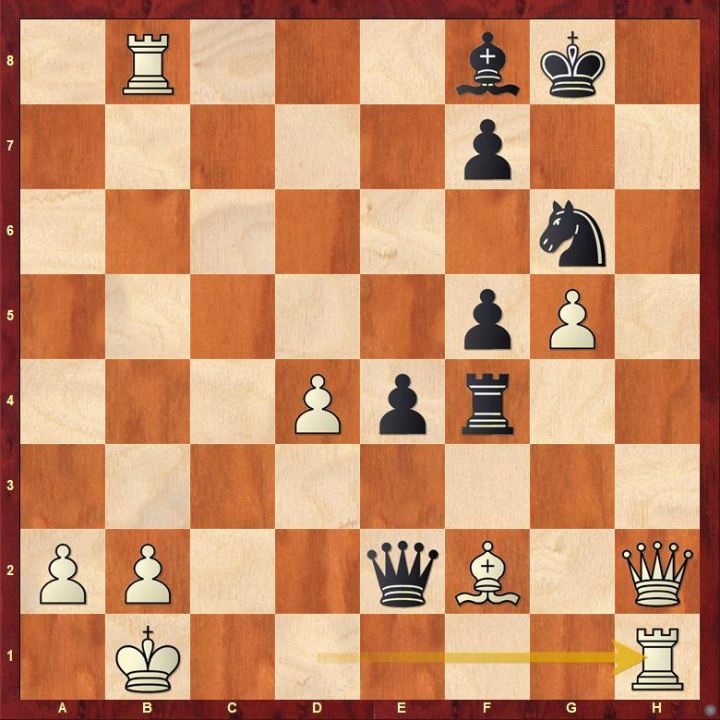 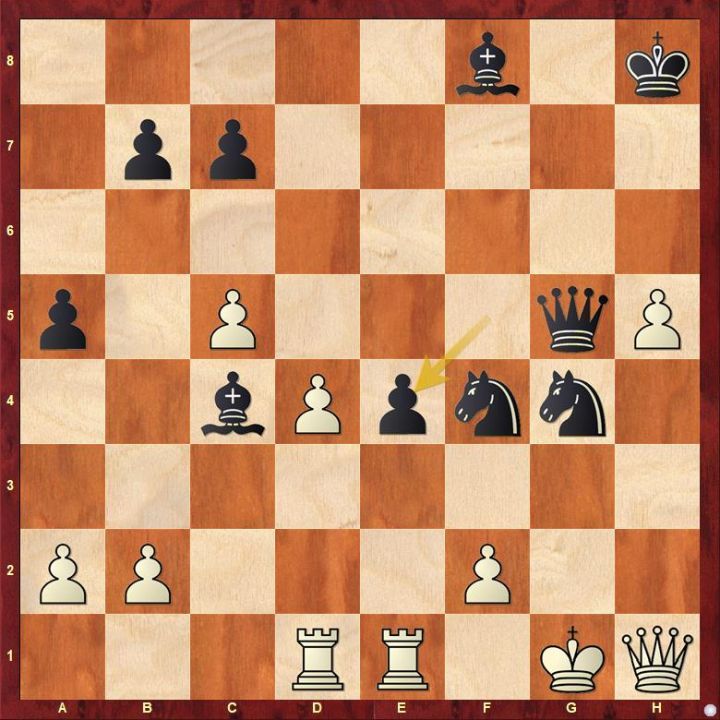 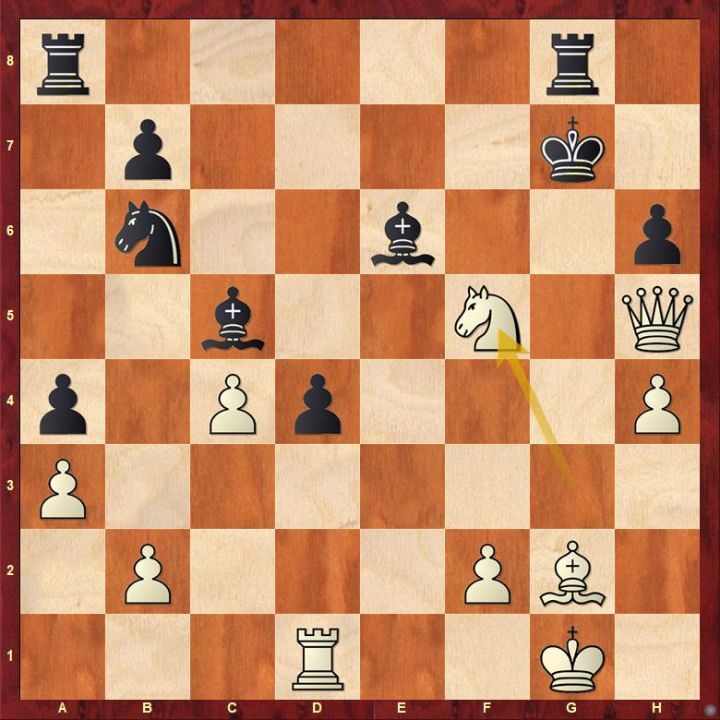 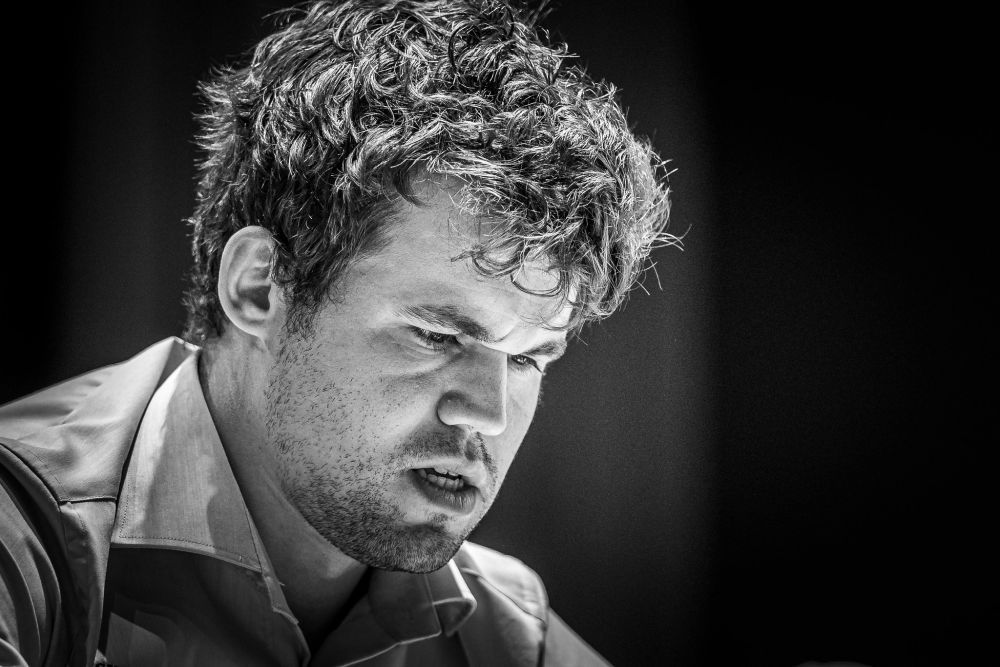 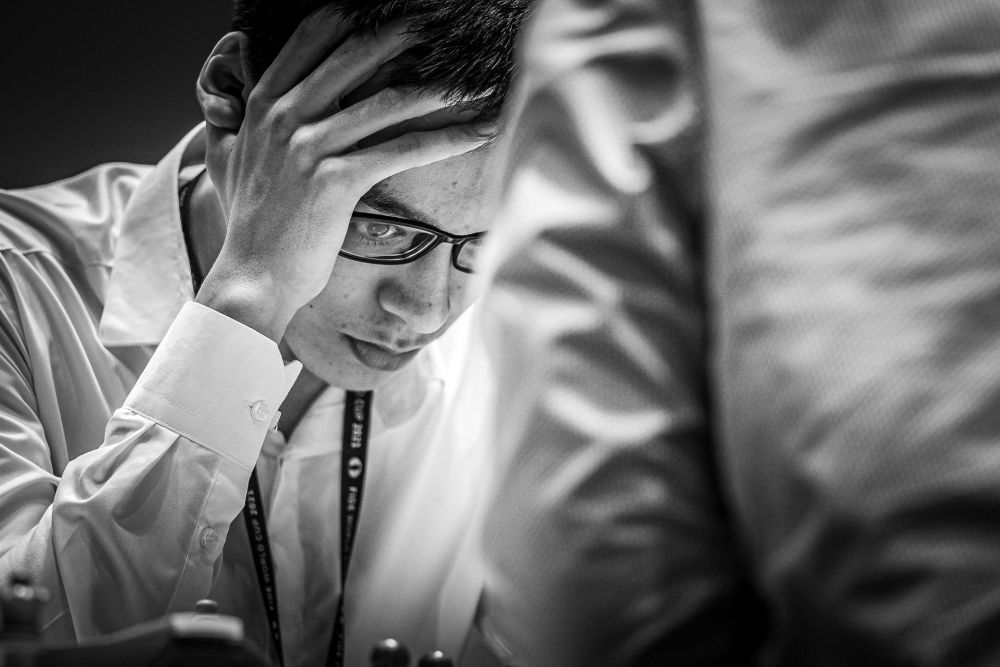 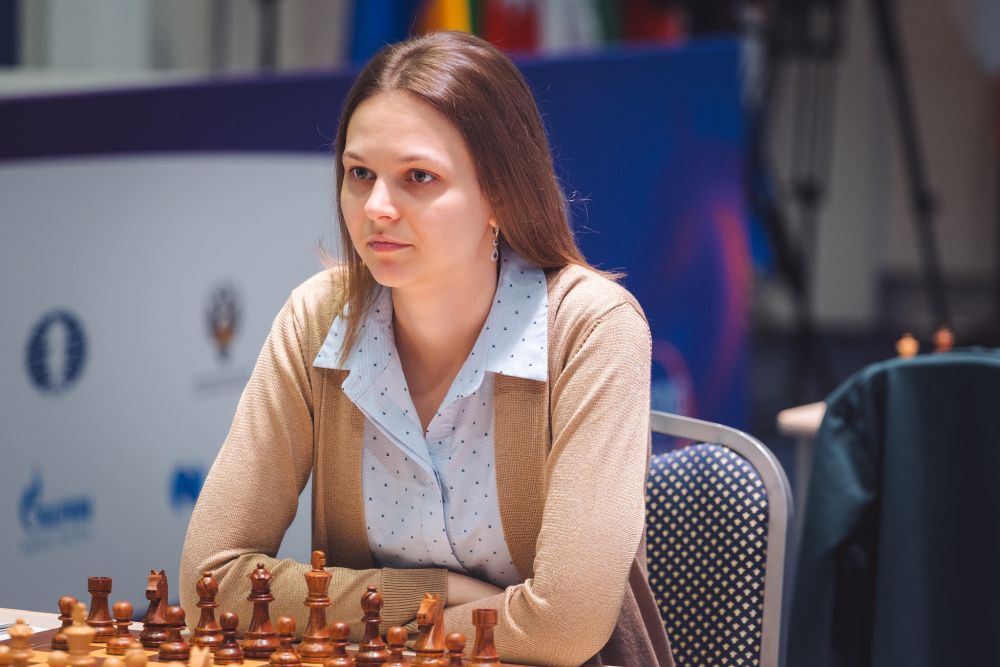 Anna Muzychuk is through to the next round | Photo: Anastasiia Korolkova/FIDE 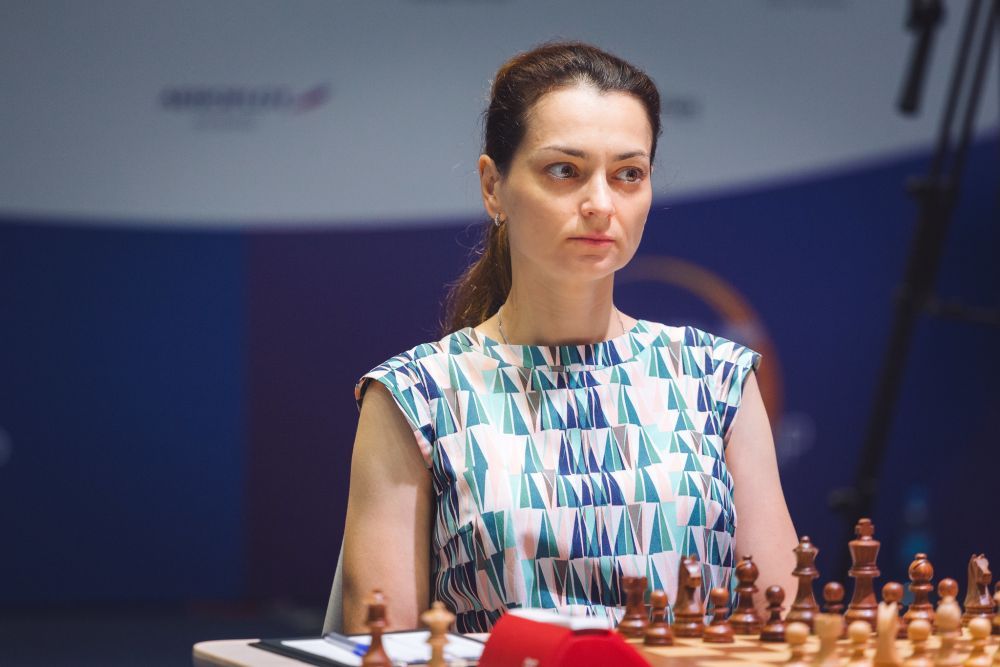 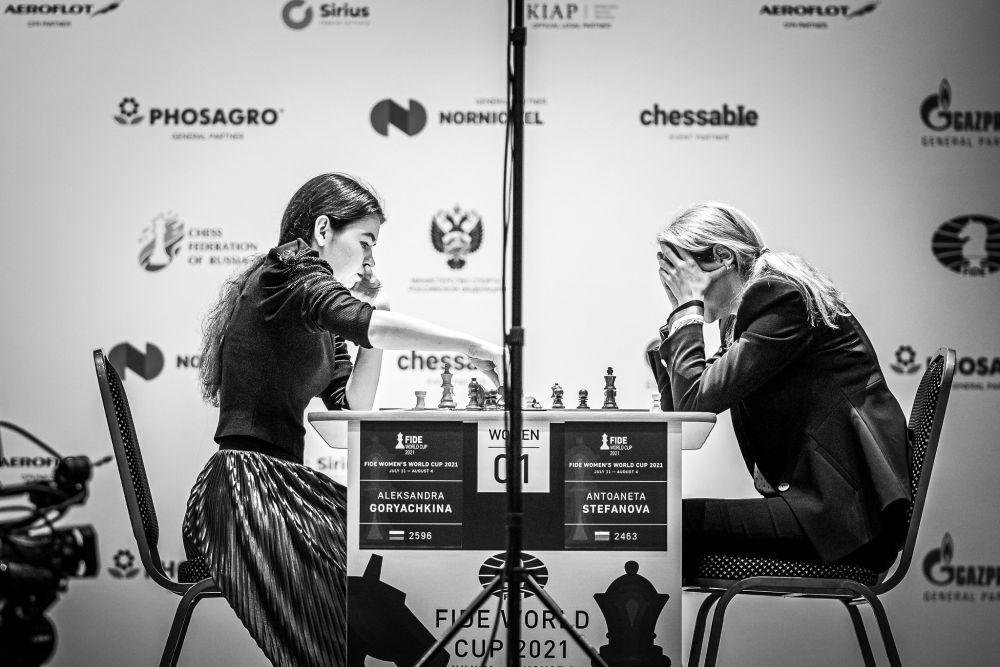 Goryachkina made a great comeback against Stefanova to force tie-breaks | Photo: Eric Rosen/FIDE 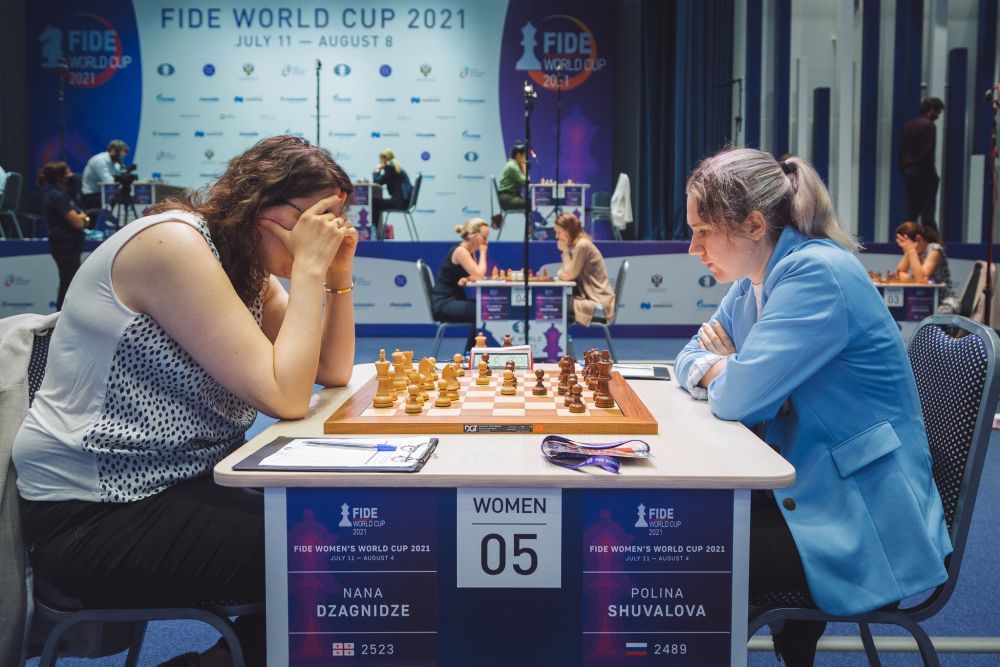 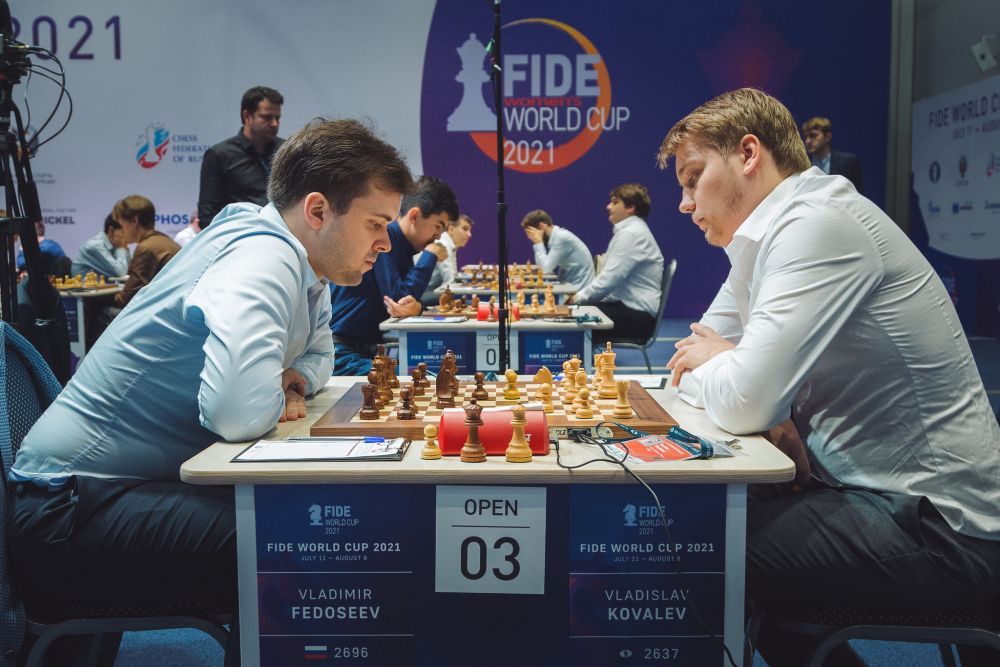 Fedoseev beat Kovalev 2-0 to secure his place in the Round of 16 | Photo: Anastasiia Korolkova/FIDE 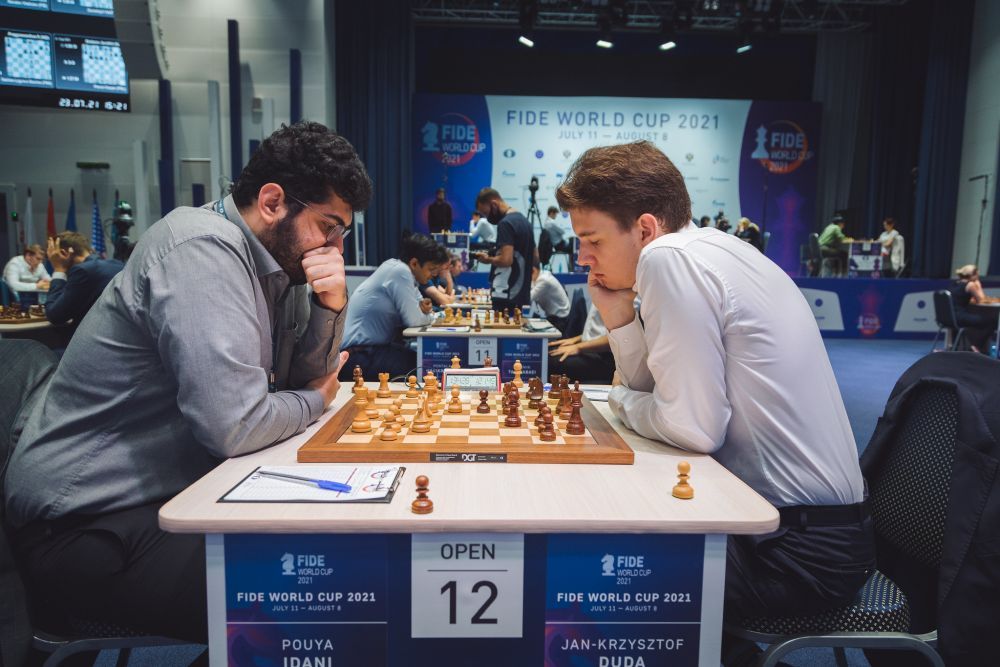 Duda beat Pouya 1.5-0.5 to advance to the next stage | Photo: Anastasiia Korolkova/FIDE 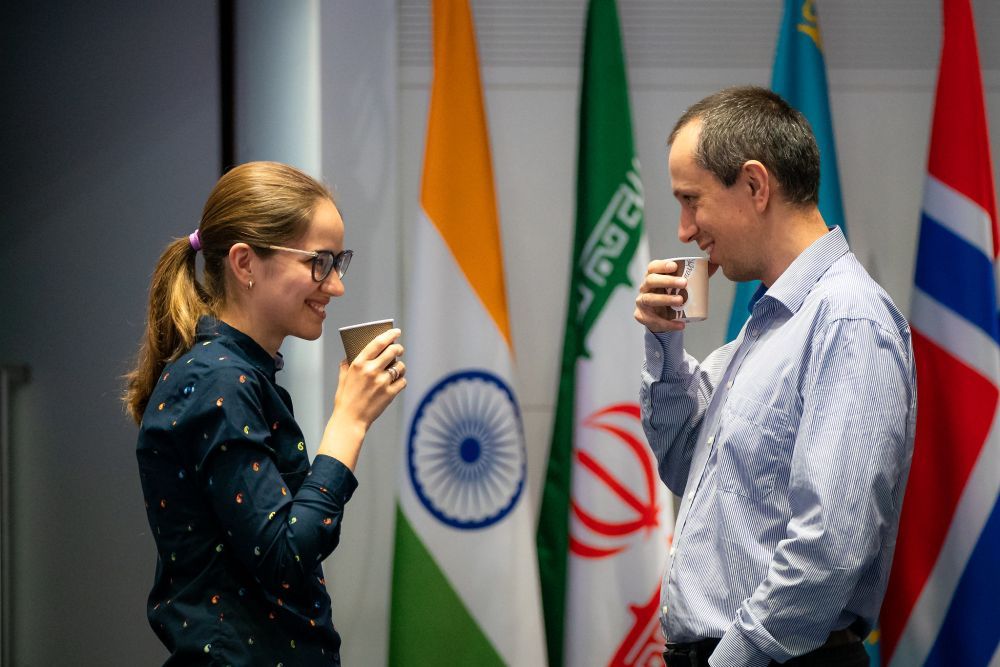