A total of 16 teams advanced to Division 3 at the conclusion of the third day of FIDE Online Olympiad 2021. Nepal, Hong Kong and Lebanon are the three Asian teams out of them. Hong Kong won the Pool A with a score of 20.0/22, Nepal finished second 18.0/22 and Lebanon was placed third 17.0/22. 12-year-old Feng Eunice was the star performer of Hong Kong as he scored a perfect 11.0/11. Kenya, Namibia, Palestine, Angola, Cyprus, Ethiopia, Suriname, Aruba, Ghana, Puerto Rico, Trinidad & Tobago, Haiti and Malawi are the remaining 13 teams to advance to Division 3. Check out the press release from the third day of FIDE Online Olympiad 2021 including few interesting positions. Photos: FIDE 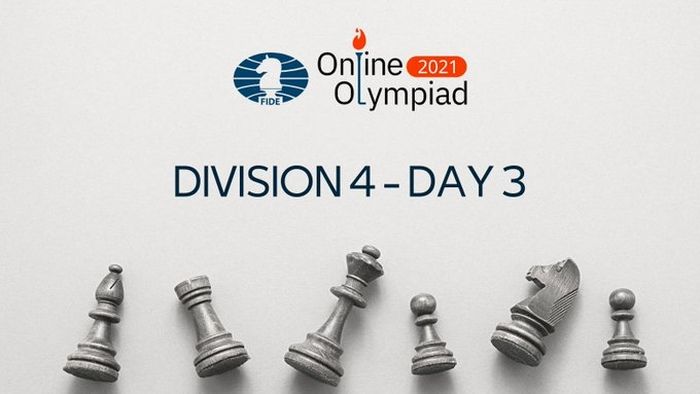 The round began today with a fun anecdote in a conversation between Malta's team captain and principal arbiter Alex Holowczak. "If you see our #1 player floating around, it's not a virtual zoom background - he IS on a boat." An excellent example of the fun possibilities of online chess!

In the later rounds of the online Olympiad, we will often see many of the stronger teams compete together from the same venue, but in the early stages, it's quite a challenge to coordinate a full roster, especially in August!

After yesterday's four final rounds, and pending the fair play panel report, the 16 qualifying teams that will advance to Division 3 are:

Division 3 will run from Friday 27th to Sunday 29th. and will see these 16 qualifiers joined by 34 new seeded teams They will play in 5 pools of 10 teams each. 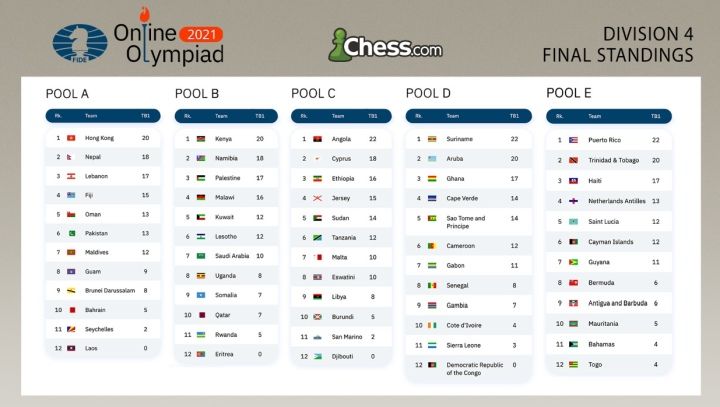 Nothing substantial changed in the last four rounds in Pool A and yesterday's three top contenders advanced to Division 3. Congratulations to the winning team Hong Kong, scoring 20 points out of 22.

Undefeated, they had nine wins and two draws, finishing full two points ahead of second-place Nepal (18/22) and three points ahead of Lebanon (17/22), that took the third qualifying spot.

Fourth place Fiji (15/22) did make a comeback, including two 6-0 wins in rounds 9 and 10, but a 2-4 loss to Lebanon shattered any hopes of taking one of the three qualifying spots. 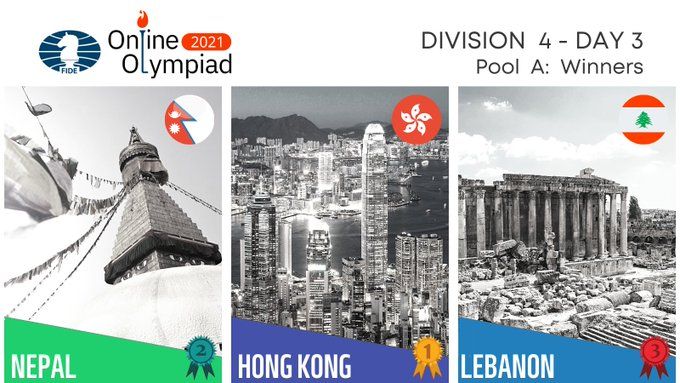 Although a loss against Namibia in the last round stopped them from scoring 100%, Pool B winner Kenya had a great run these last three days. They have dominated one of the most competed groups of the five pools, scoring 20/22, and qualifying with ease to the next stage.

The African team, captained by Ben Mangana, relied abundantly on the reserve boards and distributed the efforts throughout all the players: in fact, Kenya's top team scorer can be found on board 12 (!) where Gosrani Naiya made an outstanding unbeaten 7/8.

One of the few games that Kenya lost was played in round 8. In the next diagram, Mohamud Hussein Ali, playing for Somalia, already has his eyes set on Black's weakened king, in the hands of Kenya's Irungu Brian Mwangi. 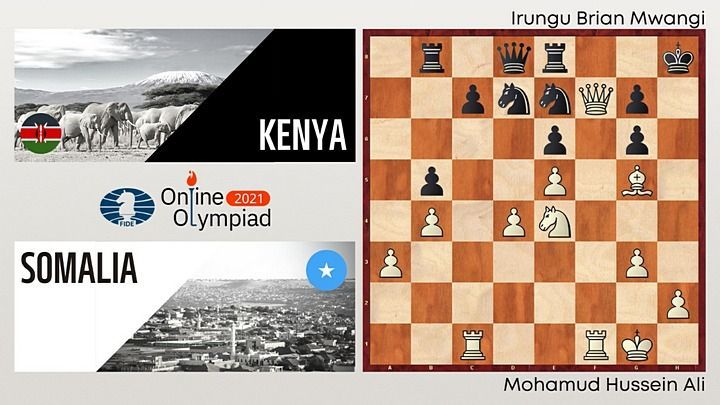 As we mentioned yesterday, second-place finishers – and surprise contenders – Namibia (18/22), did have an outside chance of qualifying by winning their four matches combined with a setback by Malawi and/or Palestine.

Their epic last round win against Kenya blended beautifully with Malawi's unfortunate 2.5-3.5 loss to Lesotho, enabling Palestine (17/22) to clinch third place by just one point. However, it does seem that Malawi might qualify as best 4th (pending fair play results). 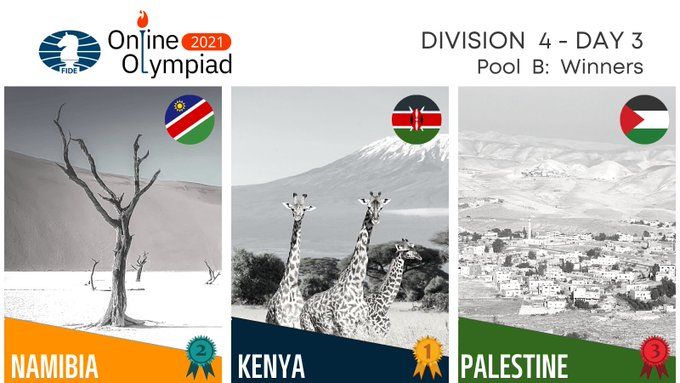 The team of Angola run through Pool C with remarkable ease. Scoring 22/22, including several 6-0, they might be the best team in the Division.

Their medium rating is definitely one of the highest (1956) and the team captained by Antonio Henriques Assis has performed outstandingly along all the boards, both main and reserve. The top scorer has been FM Junior Domingos with 7/7, but three other players have also reached the 7-point mark, albeit with some default wins.

Despite losing to Sudan and Angola, Cyprus (18/22) maintained second place in good measure thanks to their close 3.5-2.5 win over Jersey. Unfortunately, this loss allowed Ethiopia to overtake Jersey on the finish line and clinch third place with 16/22. 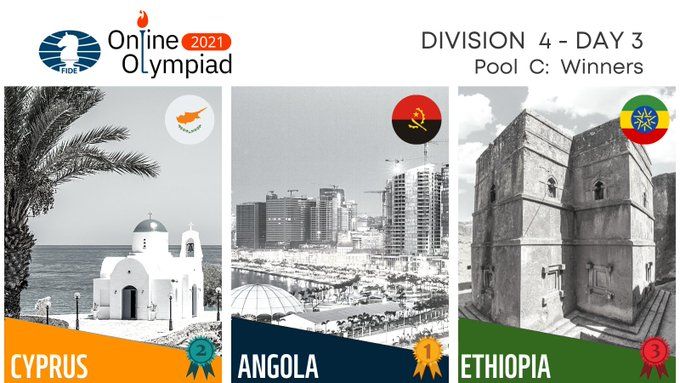 Suriname have also been a powerhouse in this Division. They have steamrolled through Pool D, winning all the matches by a minimum 4.5 score (with several 6-0), and taking down the group with a definitive 22/22 top score.

All the team players have contributed to some degree in this success, with a special mention to WCM Kaslan Alexandra, who scored an outstanding 8.5/9 result on board four.

Second place finishers were Aruba, with 20/22. The Caribbean island team also played fantastically, only losing to Suriname but crushing the rest of the competition and qualifying with ease.

The third qualification spot goes to Ghana, who preserved their advantage over the rest of the teams by scoring 7.5/8 in the last four rounds.

Due to connectivity problems in some of the African countries, this group has been a huge challenge for all contenders, and the fact that all teams were eventually able to participate must be applauded. 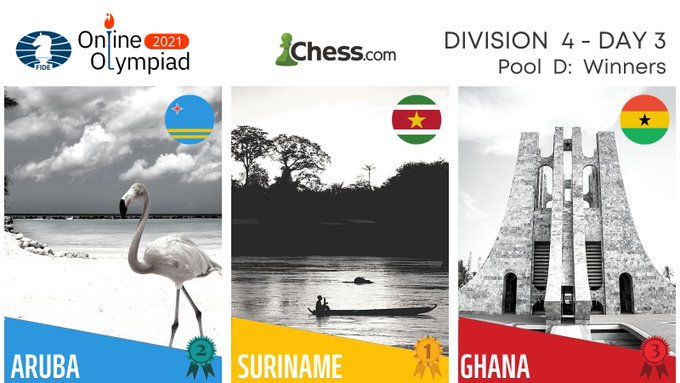 Pool E finished in the same fashion as we left the standings yesterday. Puerto Rico continued dominating today and won the group with an undisputed 100% score, /22 crushing the opposition mercilessly.

One of Puerto Rico's top scorers was Coralys M. Alvarado. Playing on board six, Alvarado scored 9/10, a massive result for the team.

The following diagram is from her game against Antigua and Barbuda's Danae Joseph. Playing White, she thematically pushed her kingside pawns forward to breach her opponent's defensive barrier. 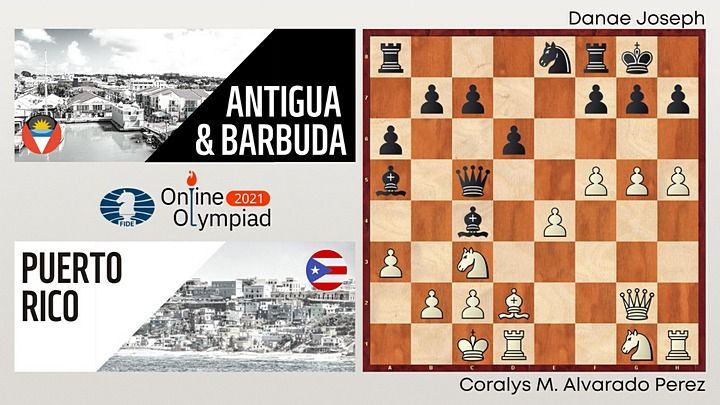 Trinidad & Tobago did exactly the same (20/22), except for their loss against Puerto Rico, and their excellent second place guarantees a spot in the next stage.

The third qualifying spot went to the team of Haiti, scoring an excellent 17/22, which will allow them to keep fighting next weekend against many top countries seeded into the event. Huge congratulations to them for competing at a high level despite everything they are going through. 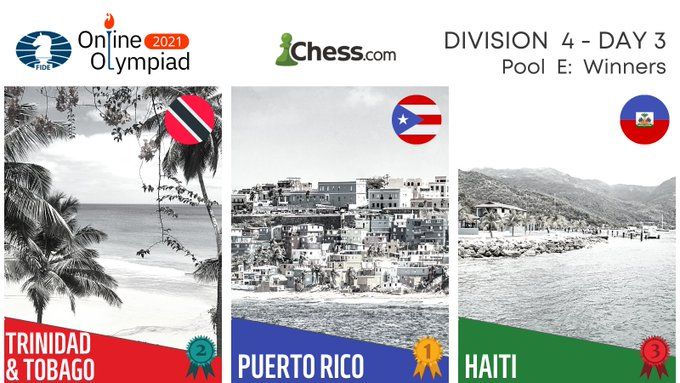 Pairings of the rounds, live games, PGN files and other useful information can be found on the FIDE Online Olympiad website. Please note that all results and standings remain provisional until the fair play panel submit its daily report.

The games can be followed online on www.chess.com (Events) and presented by Wouter Bik, with expert analysis by WFM Alessia Santeramo, GM Roeland Pruijssers, WGM Jen Shahade and WGM Keti Tsatsalashvili. Commentary can also be followed on on FIDE’s own Youtube channel.

Played online on Chess.com, the event features two main stages: the “Divisions stage”, and the Play-offs stage. All games are played with a 15 minutes + 5 seconds increment per move time control. The full schedule can be consulted here.

Chess.com as the hosting platform