FIDE Online Olympiad starts off with 400+ games on Day 1

FIDE Online Olympiad started on Friday 20th August at Chess.com’s online servers. A total of 153 teams from all over the world have signed up for the event, meaning that more than 1000 players will participate over the next three weeks. The tournament is structured in two stages: the “Divisions stage”, in which teams are seeded into each Round-Robin Pool, based on their previous results at the OTB Batumi Chess Olympiad in 2018 and in the last year’s Online Olympiad. Check out the press release from the first day of FIDE Online Olympiad 2021 including a couple of interesting positions. Photos: FIDE

The winners of each division advance progressively to the next stage, where they are joined by the stronger teams, until they eventually reach the Top Division, where the best teams in the world are seeded.  The top qualifiers will then battle it out in a knock-out Play-Off to decide who will succeed last year’s co-winners India and Russia. The following graphic summarizes the structure of the Division Stage. 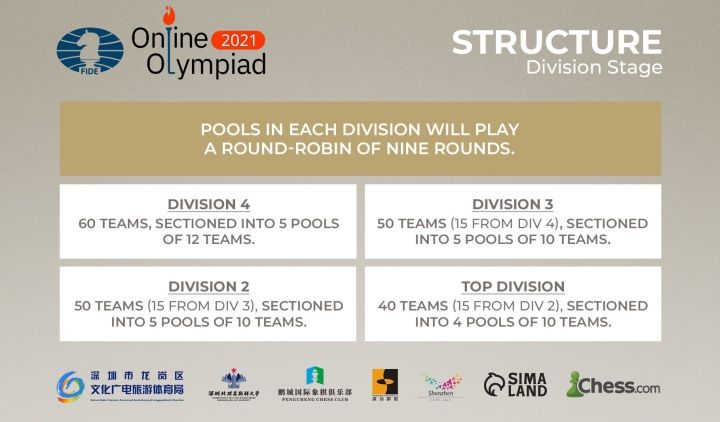 All games are played on the chess.com game server with 15 minutes + 5 seconds increment per move time control. The team structure is all-inclusive: each squad must have six players, with a minimum of three female players and two junior players.

More specifically, each team must include at least one U-20 player, at least two women and at least one U-20 female: a huge challenge to meet for many of the smaller federations. Six reserves and a team captain make up the full roster of each squad.

Day 1 of the event featured the first three rounds of Division Four’s five pools (12-team Round-Robins).  Most of these teams come from smaller federations and therefore, some defaults were to be expected: not only fulfilling the team criteria is a big challenge, but connection issues also have to be taken into account.

Even so, the turn-out was enormous and more than 400 official Olympiad games were played.  The following cool graphic gives a great idea of the event’s international representation. 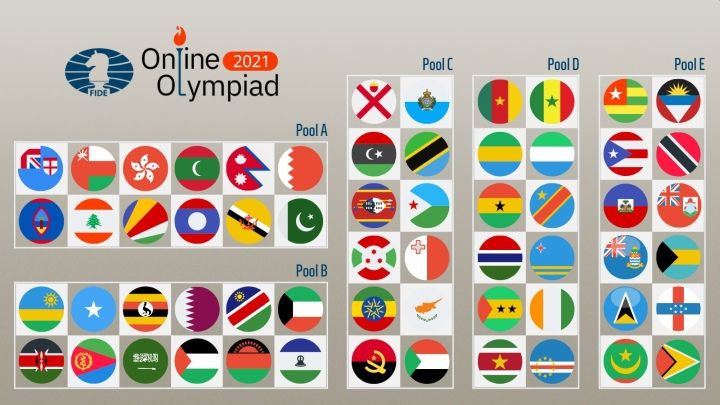 The schedule for this Division is as follows: rounds 1-2-3 are already in the books having been played today, while rounds 4-7 will be disputed tomorrow Saturday 21st. The final four rounds (8-11) will be played on Sunday 22nd. Games start at 08.00 UTC in Pool A and finish at 18.00 UTC in Pool E. The first three teams of each pool plus the best fourth qualifier will advance to Division Three.

After three rounds in Pool A, the teams of Hong Kong and Nepal are in the lead with three clear victories. Maldives Islands is close behind with two wins and a draw. Pre-event favorite Lebanon suffered a very close loss against Nepal by 3.5-2.5 and stands in fourth place with everything to be played for in the following rounds.

Three teams are tied for first place on 100% in Pool B, Malawi, Kenya and Palestine. Standings are very tight in this group, with quite a few 3.5-2.5 and 4-2 results. Many of the stronger teams are rated very similarly, around 1600 medium Elo, so we can expect a close finish.

Pool C has been quickly polarized between the top and bottom teams: none less than five federations are on 100% after having played with the bottom portion of the group. In tomorrow’s rounds, all of these teams will face each other. For now, Angola, Ethiopia, Jersey, Malta and Cyprus lead the pack.

Precisely from this group come two of today’s interesting chess moments. The following diagram is from the game between Albert Njau (Tanzania) against IM David Silva, Angola’s first board. 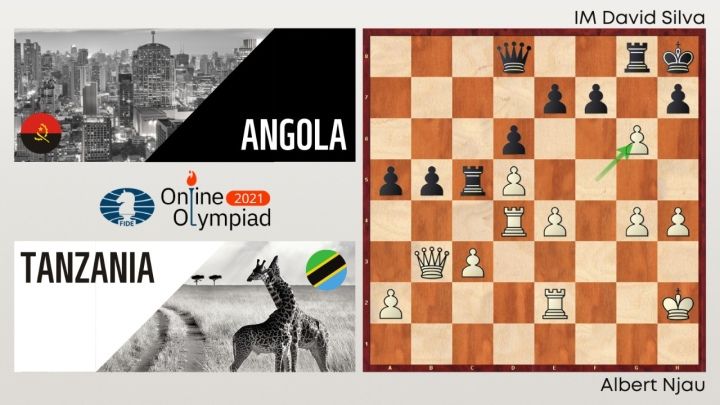 The second diagram features Jem Gurner, representing the island of Jersey, against Mohamed Khidir Abadamek, from Sudan. Black’s kingside has been seriously weakened, and White launches a decisive attack. 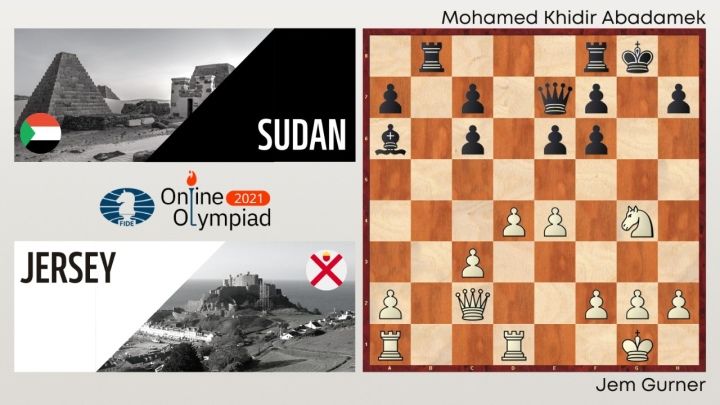 Only two teams have won the first three rounds outright in Pool D, namely Aruba and Suriname. Cape Verde is just slightly behind with two wins and a draw, and there are no less than three teams with four points, ready to strike back in future rounds. The strongest player of the whole division is in this group: IM Mariano Ortega Amarelle, playing for Cape Verde, boasts a huge 2482 rating, in a Division where most of the players are rated under 2000.

Finally, the three top spots in Pool E will be closely contested. Puerto Rico, Haiti, Trinidad Tobago and Guyana are all on 100% after the first three rounds, scoring heavily with many 6-0 and 5-1 results. Surely, all the world’s chess fans will be cheering on the team from Haiti: after last week’s devastating 7.2 earthquake a withdrawal would have been fully understood, but the team, headed by captain Jacques Muller Luxama, deserves praise for its fighting spirit.

Pairings of the rounds, live games, PGN files and other useful information can be found on the FIDE Online Olympiad. Standings and results remain provisional until the fair play panel has submitted their daily reports.

The games can be followed online on www.chess.com (Events) and @chesscom will be hosting daily commentary, anchored by Wouter Bik, with expert analysis by @AlessiaSantera1, @monkey_chess, @JenShahade and @keti_chess. Commentary can also be followed on FIDE’s own Youtube channel.

Played online on Chess.com, the event features two main stages: the “Divisions stage”, and the Play-offs stage. All games are played with a 15 minutes + 5 seconds increment per move time control.