Opera Euro Rapid Finals: Carlsen and So poised for a thrilling finish

Wesley So is delivering strong performance at Meltwater Champions Chess Tour Opera Euro Rapid. The first set of the Finals was no different than the Skilling Open Finals. In the fourth game of the first set, So was in a must-win situation to equalize the score. That is exactly what he did. So has beaten Carlsen several times in the finals including the first event of this tour, Skilling Open. Can he repeat that result again? Catch the Finals live stream with IM Sagar Shah and Amruta Mokal on our youtube channel tonight from 9:30 p.m. IST to find out who wins Opera Euro Rapid. Photo: chess24 Live stream

So can win in a must-win situation

The first set of the Opera Euro Rapid Finals between Carlsen and So ended at the exact same score as Skilling Open Final 2-2. However this time the only difference was there were two draws but So replicated his comeback by winning the fourth game and levelling the first set. Meanwhile Radjabov scored two wins and won the first set 2.5-1.5 against Vachier-Lagrave. 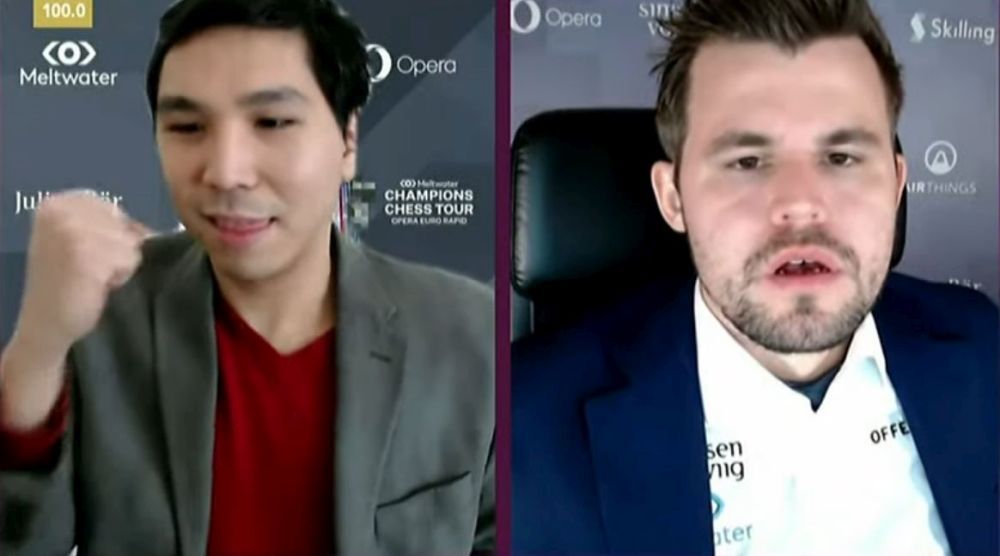 So always fights back against Carlsen | Photo: chess24 live stream

Carlsen went for the Two Knight's Defense in the second game. The Norwegian made his intentions clear with an early onslaught on the kingside. 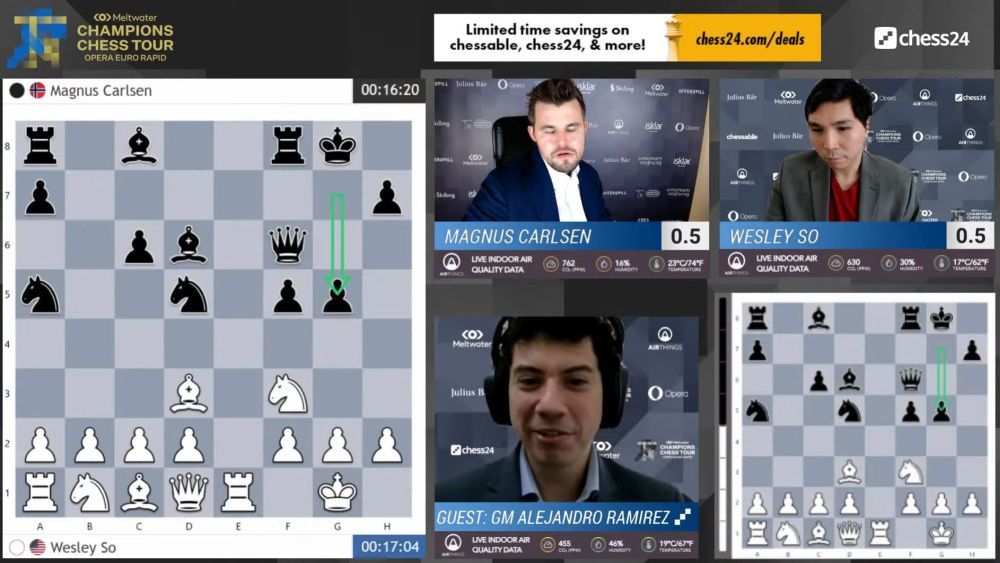 Black is simply threatening g4 to trap the knight. White might be having two extra pawns but black has more than enough compensation and a strong initiative which white has to deal with. 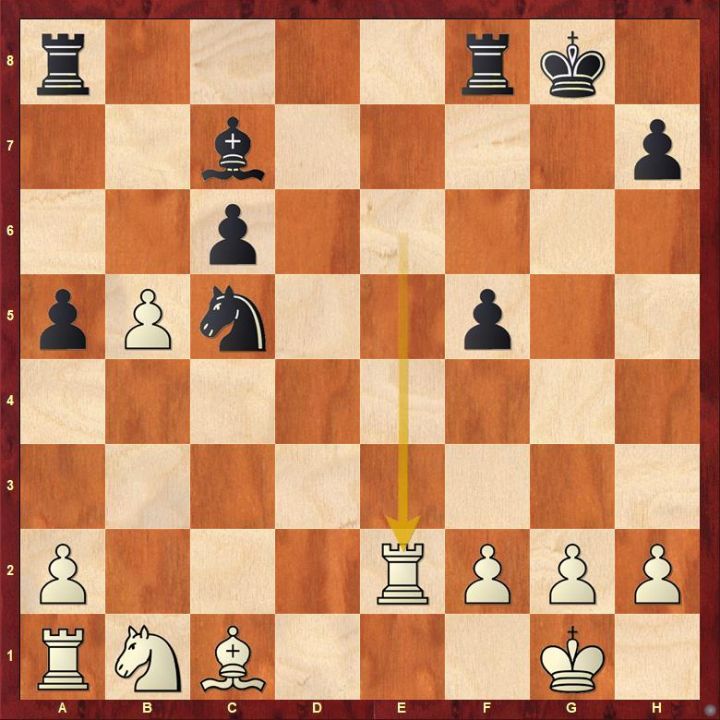 The lack of development on the queenside and weak back rank accentuated 26.Re2 to be a big mistake. The threat of Be5 is always looming large and after 26...Rfe8 things can only go in black's favor. The world champion obviously converted his advantage into a full point and took 1.5-0.5 lead in the first set.

The third game was an uneventful draw. So was down by 1-2. He had to win the fourth game to draw the first set and that is exactly what he did. Black's position went in shambles after 22...gxf6. Even after 22...Rxf6 things would have been difficult for black. So wrapped up the game in another 15 moves and finished the first set 2-2.

Not a lot happened in the first game and it ended up in a draw. In the second game, Vachier-Lagrave 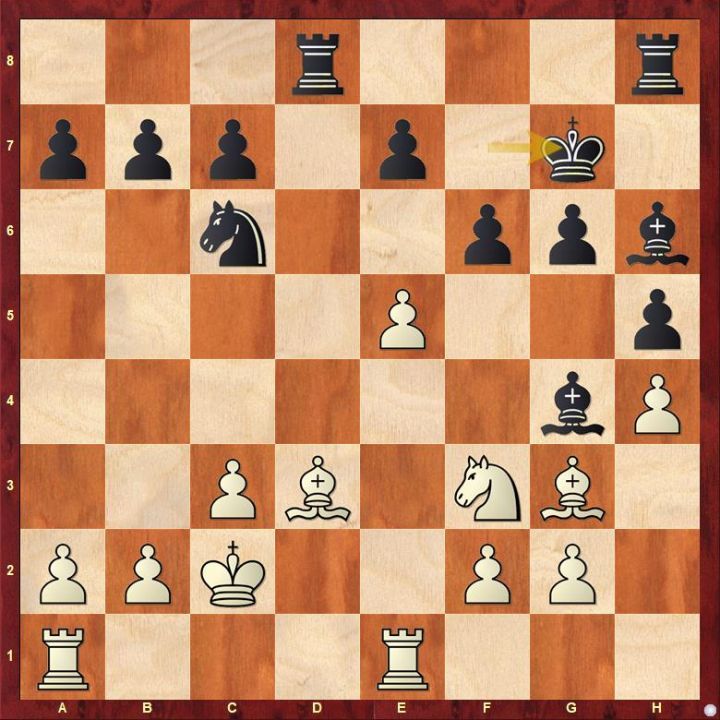 Black needed to simplify things with 14...Bxf3 15.gxf3 f5 instead 14...Kg7 allows white to play on both sides of the board and get a better position in the end which is what happened in the game.

Vachier-Lagrave levelled the score by winning the third game. He got a decent position out of the opening and Radjabov had difficulty getting the harmony back to his pieces. 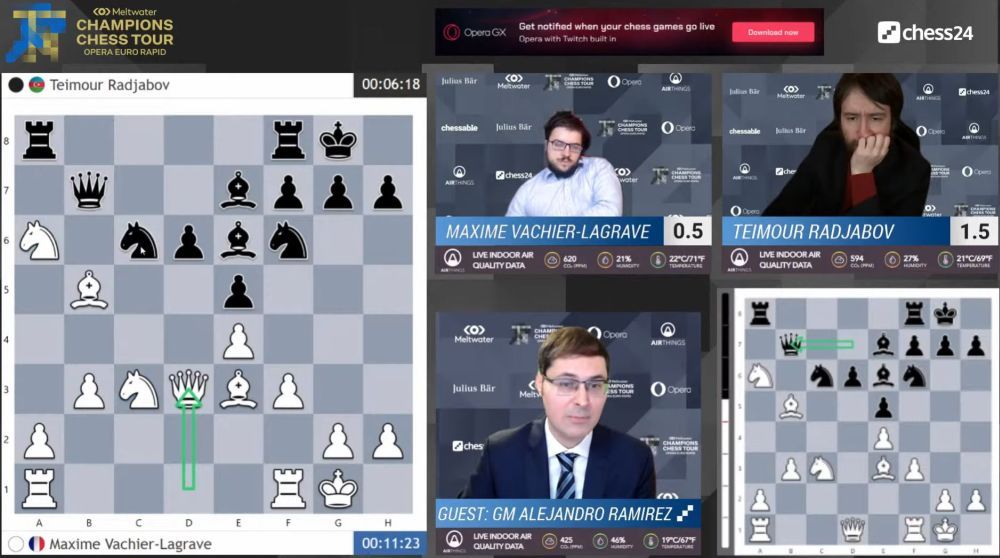 White is in full control of the position after 19.Qd3 and having an extra pawn made black's task that much more difficult. With this win Vachier-Lagrave reduced the gap and made the score 1.5-1.5

Radjabov once again went for the same variation in English opening where he traded queens off early. It worked in the second game, now it also worked in the fourth one too. 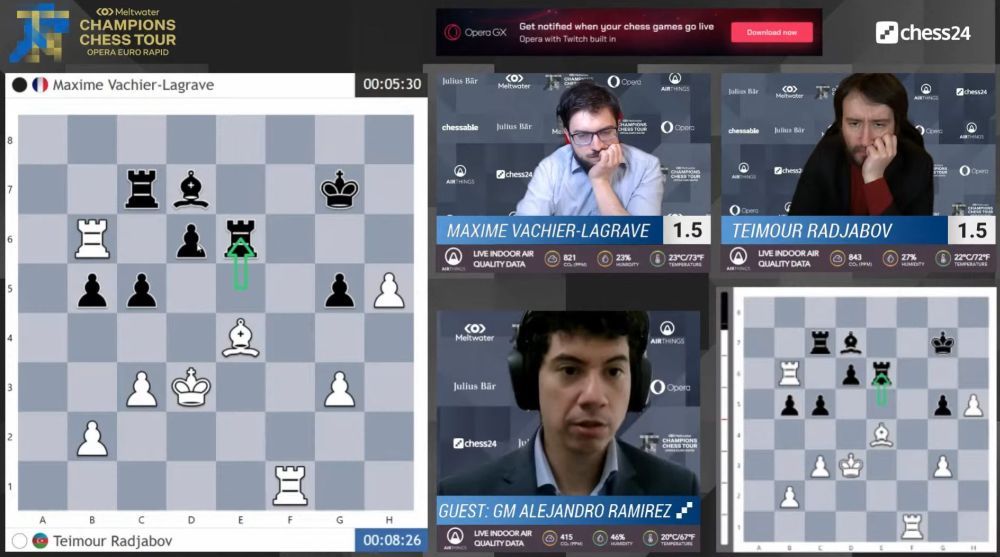 Black blundered at the end with 39...Re6. Find out why it is a mistake and what black should have done instead. 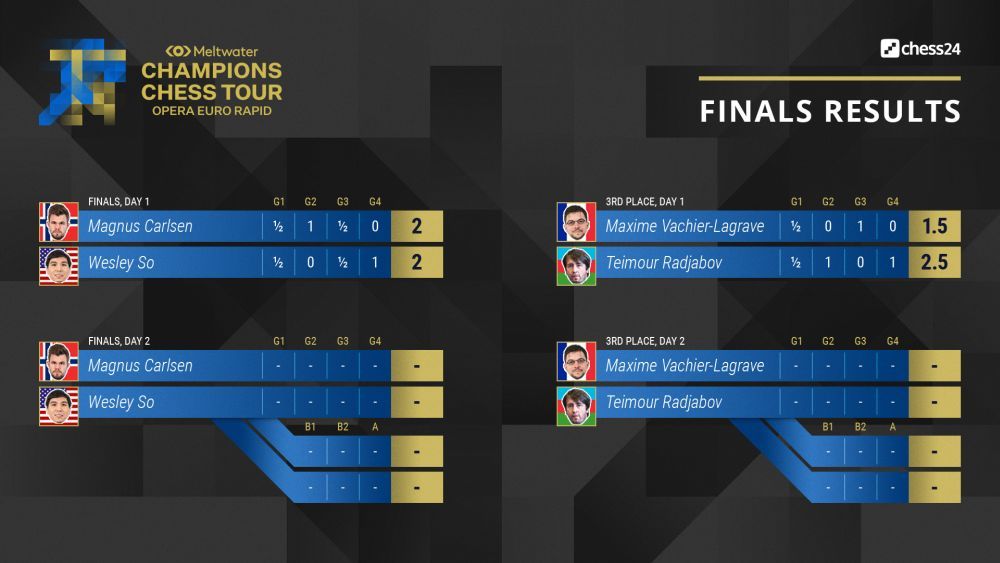