Both Carlsen and So are in tremendous form as they once again needed only three games to beat their respective opponents and advance to the Semi-Finals of Meltwater Champions Chess Tour Magnus Carlsen Invitational. Carlsen will face Nepomniachtchi and So will be up against Giri in the Semi-Finals. Nepomniachtchi was also dominant against Nakamura as he also needed only three games to advance while Giri also delivered a solid performance against Vachier-Lagrave. Semi-Finals continue tonight from 9:30 p.m. IST with live commentary by IM Sagar Shah and Amruta Mokal on ChessBase India youtube channel. Photo: chess24 live stream

Is Carlsen-So rematch on the cards?

Magnus Carlsen and Wesley So once again dominated their opponents Levon Aronian and Alireza Firouzja to advance to the Semi-Finals. They won the second set with a score of 2-1 and 2.5-0.5 respectively. If their present performance is a sign of things to come then we are looking for a Carlsen-So rematch in the Finals. Giri and Nepomniachtchi also delivered strong performance as they did not lose a single game in the second set en route their victory over Vachier-Lagrave and Nakamura respectively.

Aronian got an early opportunity to gain the upper hand but he opted a more calm way. 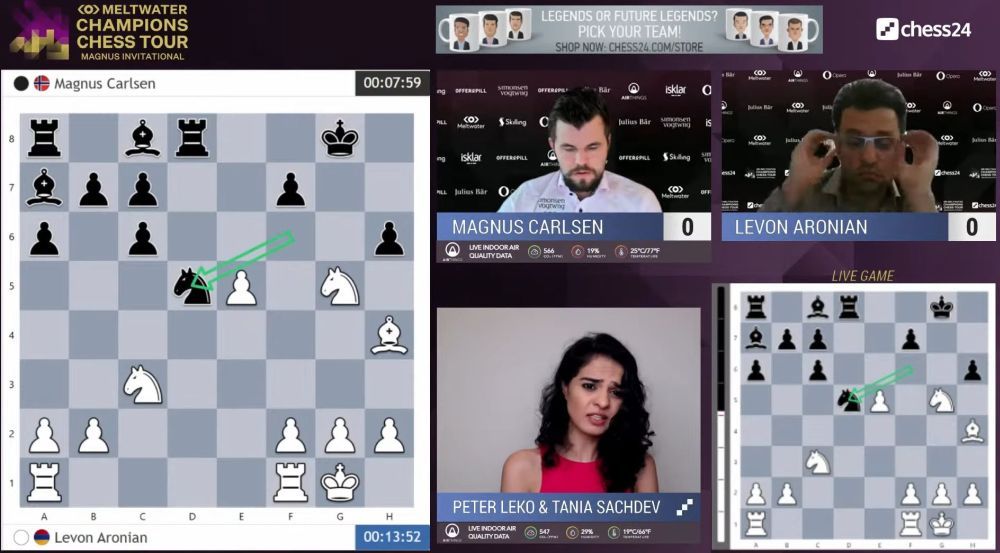 The game went on with 15.Nge4 but white could have gone with 15.Nxf7 as that would have allowed white to gain an extra pawn. 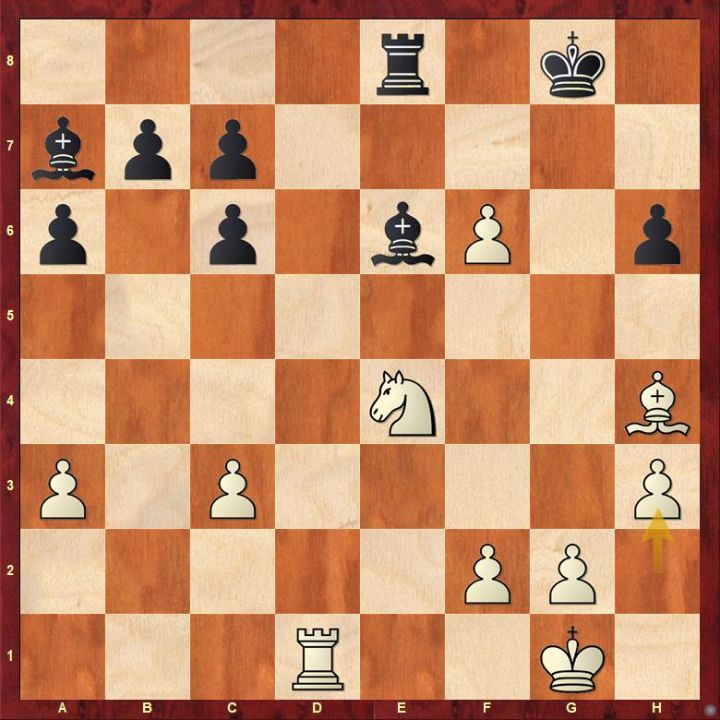 21.h3 turned out to be the final mistake for white as there is no good defense after 21...Bb3 unless white decides to give up a pawn with 22.f7+ which is what happened in the game.

The second game was a quiet draw as pieces got exchanged at regular intervals and draw became the obvious result. Aronian got a fantastic opportunity in the third game but he was unable to seize it. 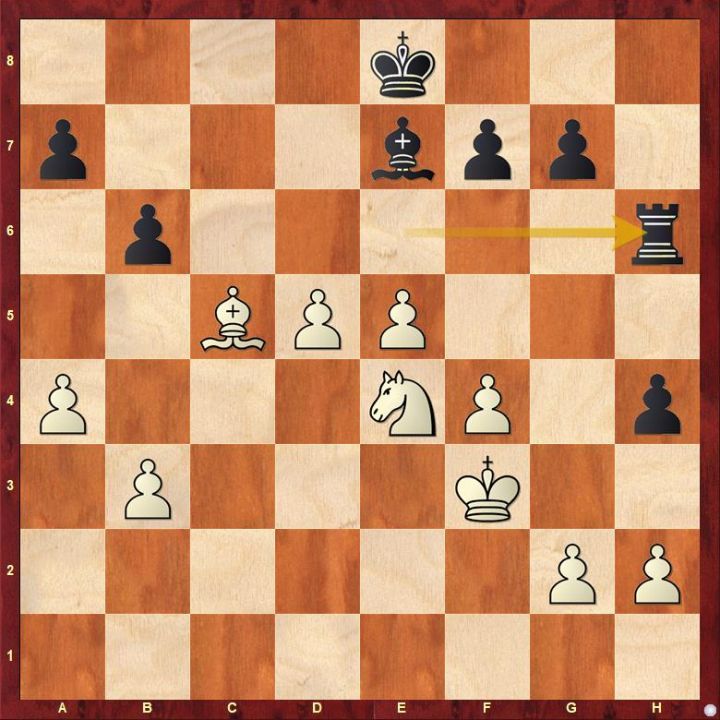 White has a huge advantage here. Should white exchange the bishops here with 40.Bxe7 or not? 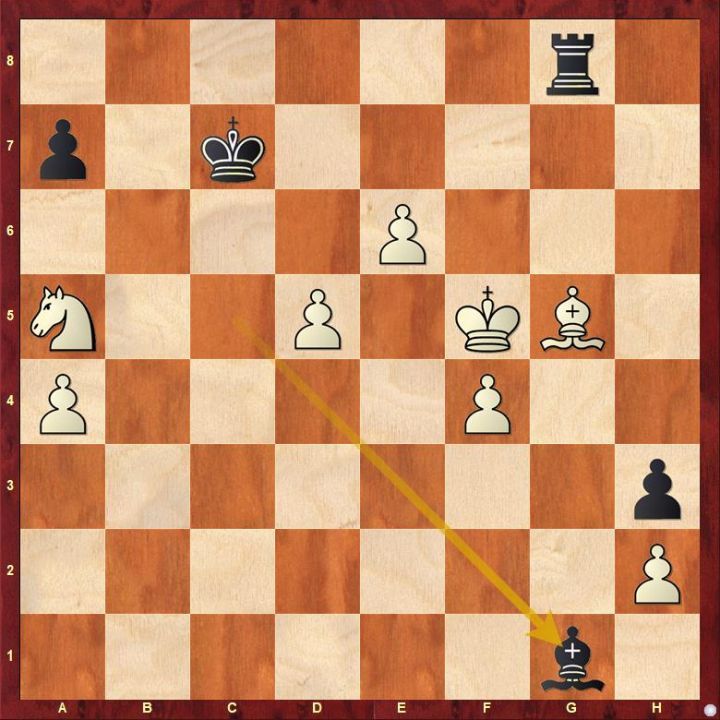 White is still winning after 55...Bg1. Losing the h2-pawn should not be a big issue if white finds the right plan. 56.Kg4 is certainly not a step in the right direction. Although white was still winning after 56...Kd6 because the advantage was huge for white. Aronian completely misplayed and the world champion salvaged a draw and advanced to the Semi-Finals.

It was not that Giri did not have any opportunity in the first game. 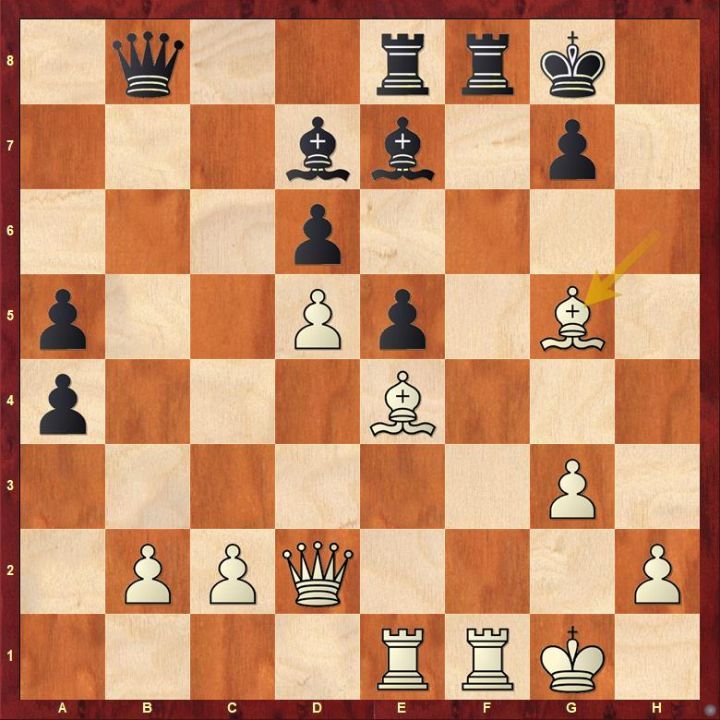 Black could have done something to gain a slight edge after 34.Bg5 but 34...Bh3 right away was not the way to attain that.

Vachier-Lagrave kept sacrificing pawns without enough compensation in the second game. He lost one pawn too many which eventually cost him the game against Giri. The third game was a rather calm draw. Vachier-Lagrave lost the fourth game in just a 20-move miniature. 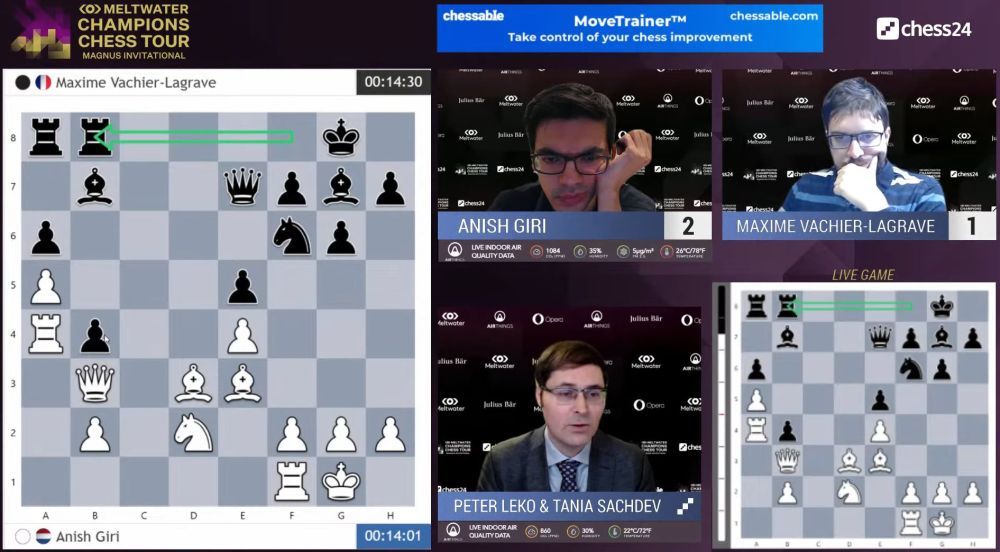 It was all over for black after 17...Rfb8. Find out why. With this win Giri advanced to the Semi-Finals and Vachier-Lagrave got eliminated.

Anish Giri on his win against MVL and facing Wesley So in the Semis | Video: ChessBase India

The first game was a well fought draw.

So made a quick work of Firouzja in the second game as he checkmated his opponent in just 26 moves. 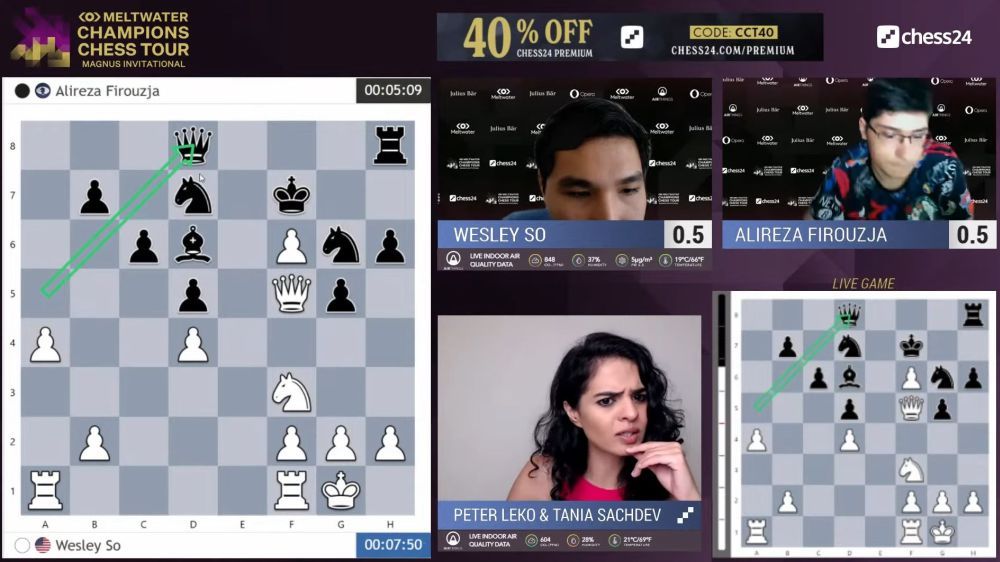 19...Qd8 did not help black's cause because after 20.Rae1, black is unable to take on f6. So the phantom attack on f6 was pointless. Black lost the game in another six moves.

Firouzja desperately looking for a win to keep his chances alive, went all out against So in the third game but it backfired and he lost the game. Thus So advanced to the next stage and Firouzja got eliminated.

Nakamura made an incorrect response to Nepomniachtchi's attack on the kingside. 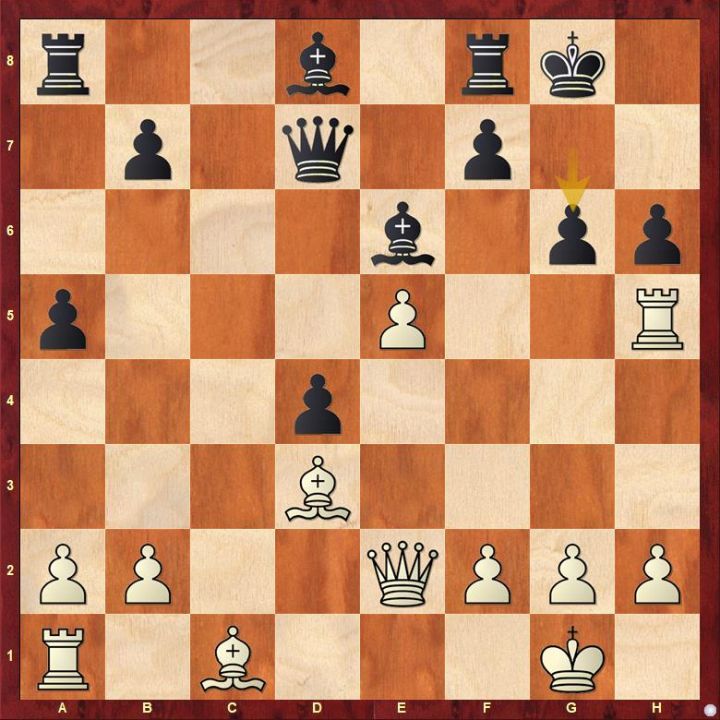 22...g6 definitely does not seem to be doing any favor to black, it's just the opposite. Black just needed to play 22...Re8. Things just spiraled out of control for black after 23.Rxh6 and it became just a matter of time before white converted his advantage into a full point.

Nakamura went extremely passive in the third game and for that Nepomniachtchi punished him rightly and finished the game in just 28 moves. 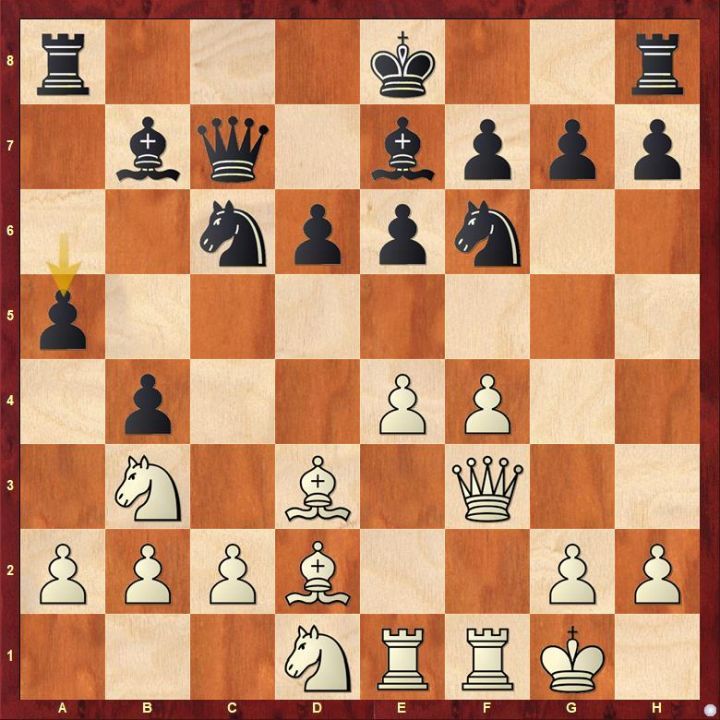 The third game was a hard fought draw which meant Nepomniachtchi advanced to the Semi-Finals and Nakamura got eliminated. 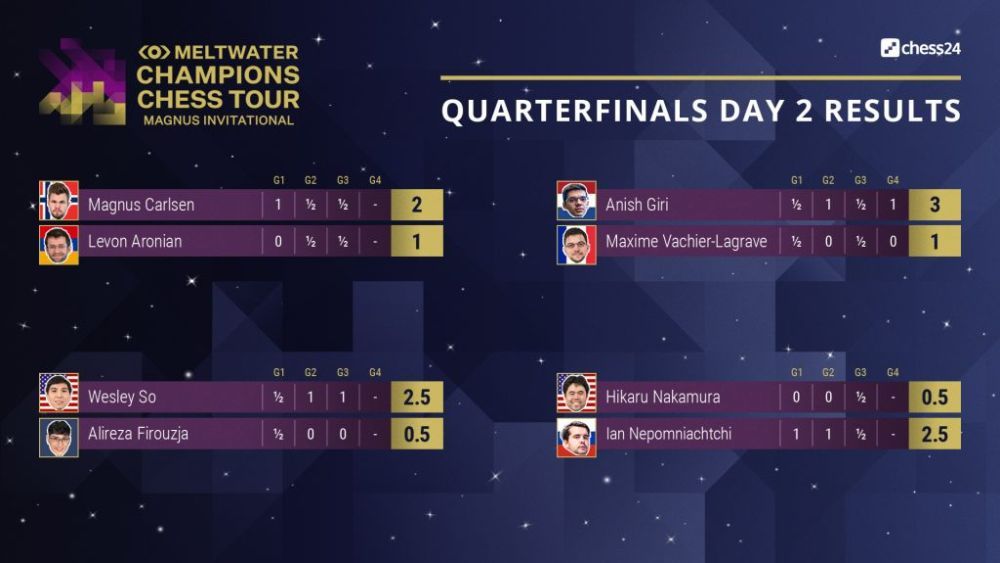 It will be Carlsen-Nepomniachtchi and So-Giri at the Semi-Finals | Photo: Champions Chess Tour