Radjabov defeated Aronian 2-1 in the second set of the Finals of Champions Chess Tour Airthings Masters. Aronian got his chance in the first game of the day but he could not capitalize on his opportunity and it ended up in a draw. Radjabov won the second game with a fantastic play in the endgame and drew the third to win the event and qualify to the Finals of the Tour which the world champion Carlsen earlier via tweet that it will take place in San Francisco in September this year. Vachier-Lagrave beat Dubov to finish third in the tournament. Photo: Champions Chess Tour

Teimour Radjabov won an intense Final against Levon Aronian by beating him 2-1 in the second set of the Champions Chess Tour Airthings Masters. Radjabov in a post-match interview shared, "...It was super tense... 2020 was kind of super hard year for me. After winning the World Cup and this pandemic and stuff. I don't want to talk about different subject but it was really hard year for me. It took me a lot of energy to work on my chess to kind of comeback to professional chess more or less because I was kind of depressed and all that stuff. It's not about winning against Aronian or something like that, that people think about... no not at all. It's just this kind of effort that we put and it's just that you know you want to prove to yourself that you are capable of doing things on the highest level..." Radjabov has qualified to the Finals of Meltwater Champions Chess Tour which will take place in San Francisco in September this year.

The first game on a final day was a spectacular one. Aronian got to play in his usual penchant to create some imbalances. 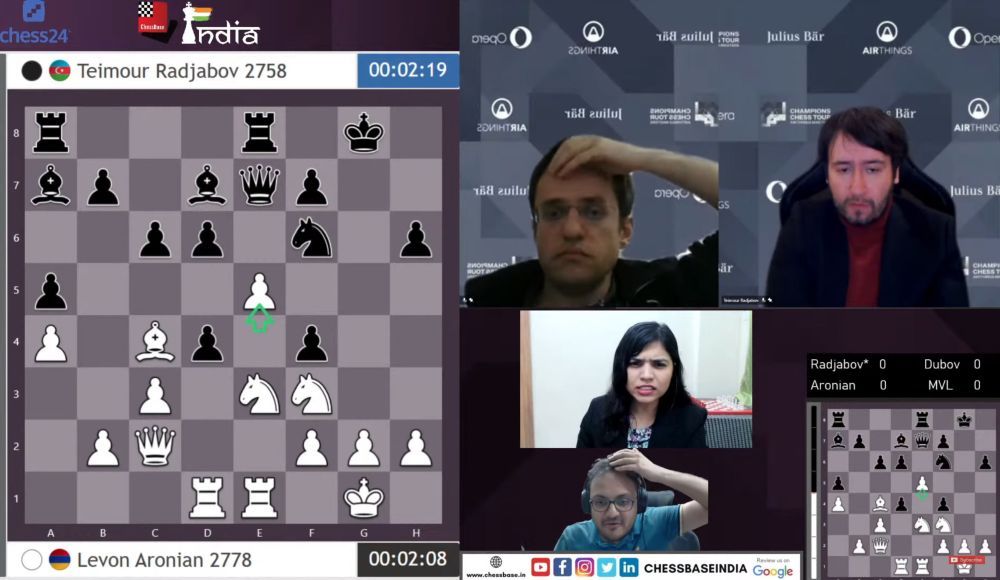 Does 21.e5 work? Well if you think deep enough then it doesn't. But with only a little over two minutes left on the clock and the game being played in the Finals, it is not easy for black to find the correct defense. Black has two ways to defend the checkmate threat at h7, only one of them is correct as the other one will lead to loss. Find out which is the correct one and why. 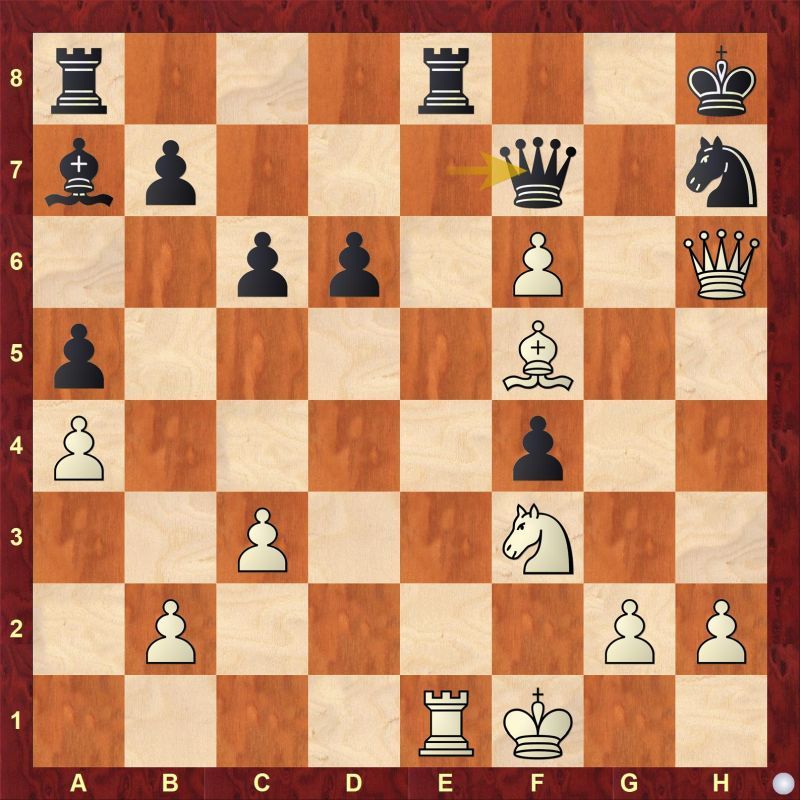 Aronian made an incorrect pawn sacrifice in the second game which made things difficult for him. 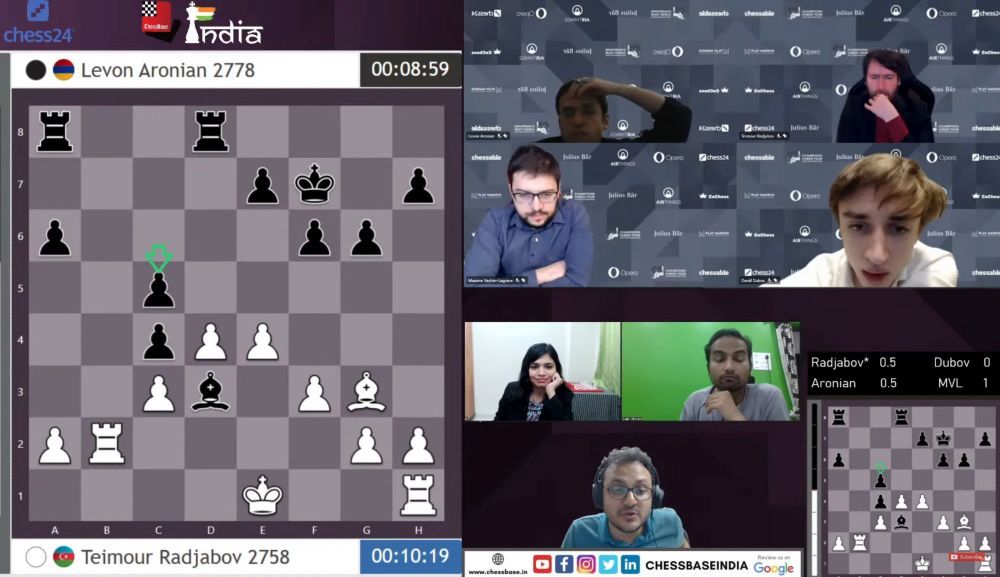 The problem with 21...c5 is black is neither able to recapture it soon nor he gets enough compensation for it. 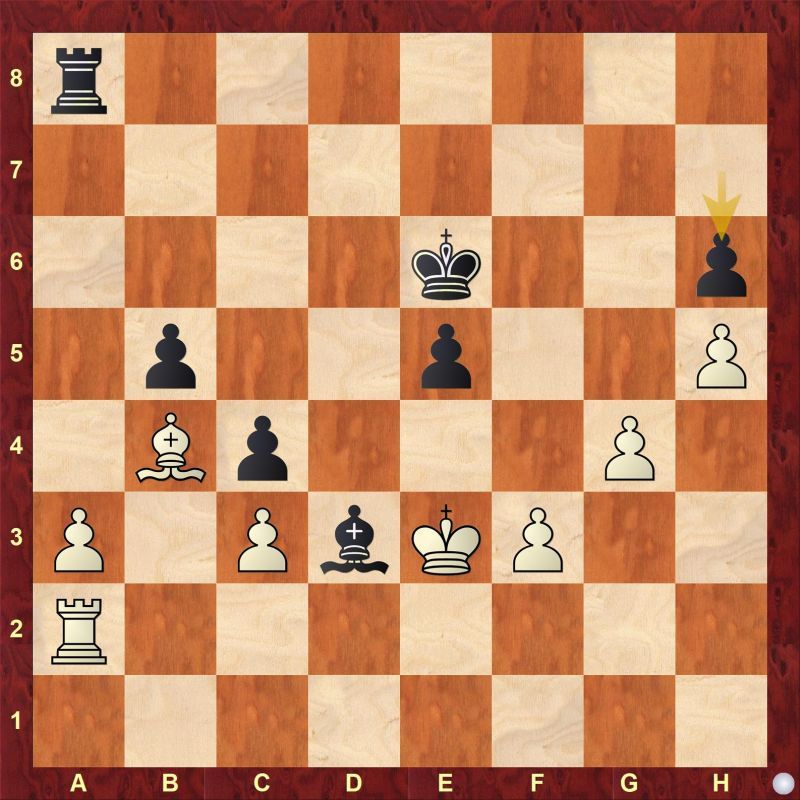 40...h6 is what we call, 'the straw that broke the camel's back'. Sure it was difficult for black to defend but it was somewhat manageable till black created a target by pushing the h7-pawn.

The third game ended up in a draw which meant Radjabov won the match and the Finals as even if Aronian won the last game of the second set, he would've only managed to draw the set. To force tie-breaks, Aronian needed to win the second set.

Vachier-Lagrave continued his momentum from the previous day and won the first game. However Dubov had a decisive advantage in the middlegame. 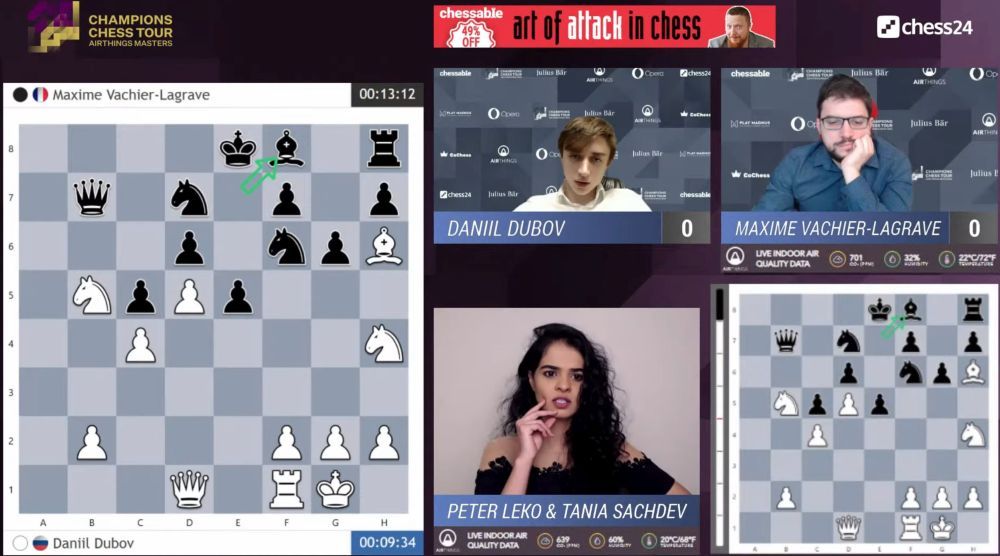 18...Bf8 looks to be strange and white should be able to capitalize on it. How? The game went on with 19.f4 which was not the best way. Black gave one more chance to do the same thing as he could in the previous move when he played 19...e4. A lot of inaccuracies cost Dubov his fantastic advantage and Vachier-Lagrave won the game.

The second game ended up in a draw.

Dubov made a comeback by winning the third game capitalizing on his opponent Vachier-Lagrave's mistake. 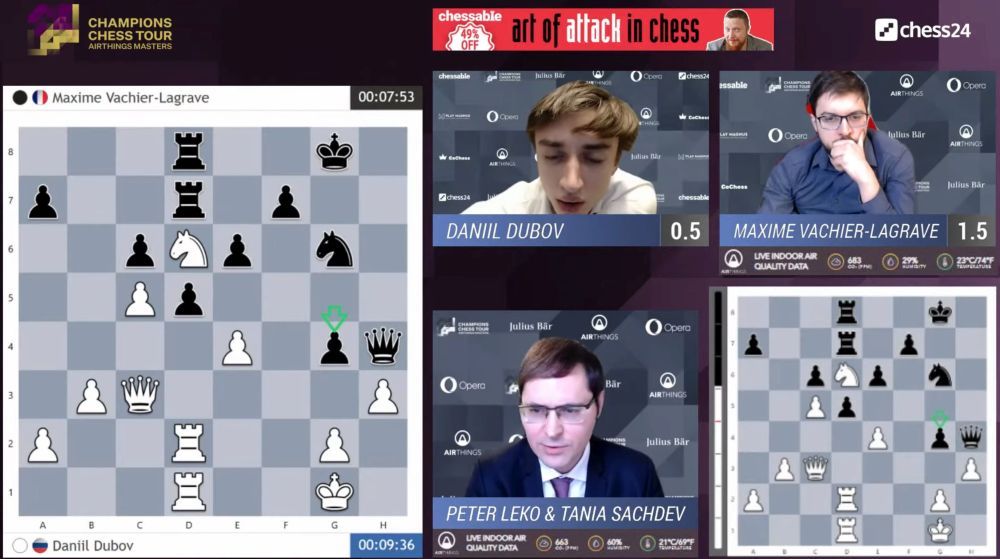 Leko also doubted black's idea behind 32...g4. Find out why g4 is a mistake for black.

In the fourth game, Dubov allowed an incorrect chain exchange which helped Vachier-Lagrave to arrive at a favorable endgame. 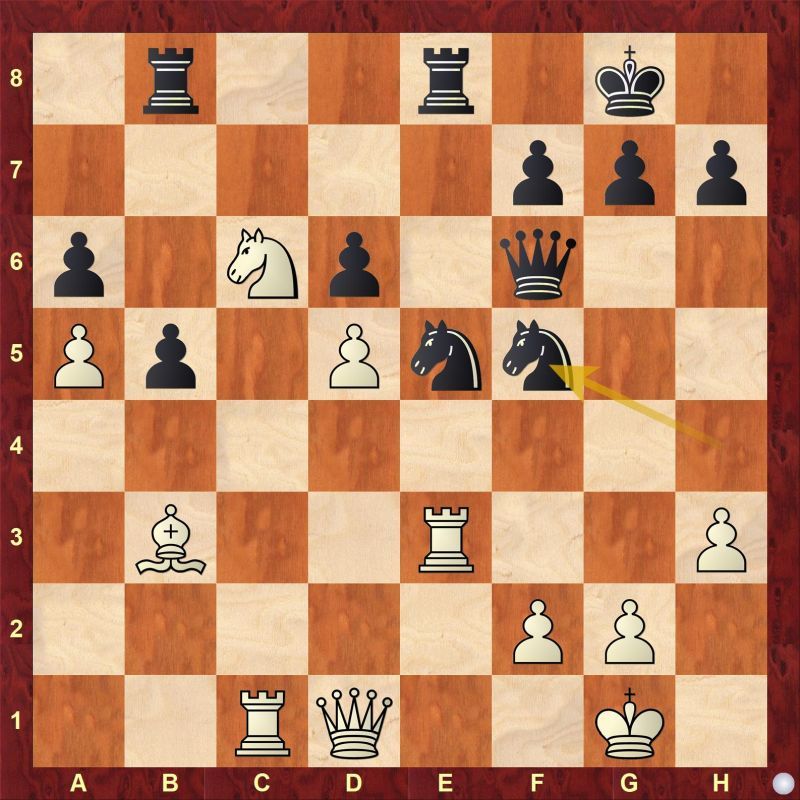 Find out why 27...Nxf5 is a mistake. With this win Vachier-Lagrave won the second set and the match, thus securing the third position. 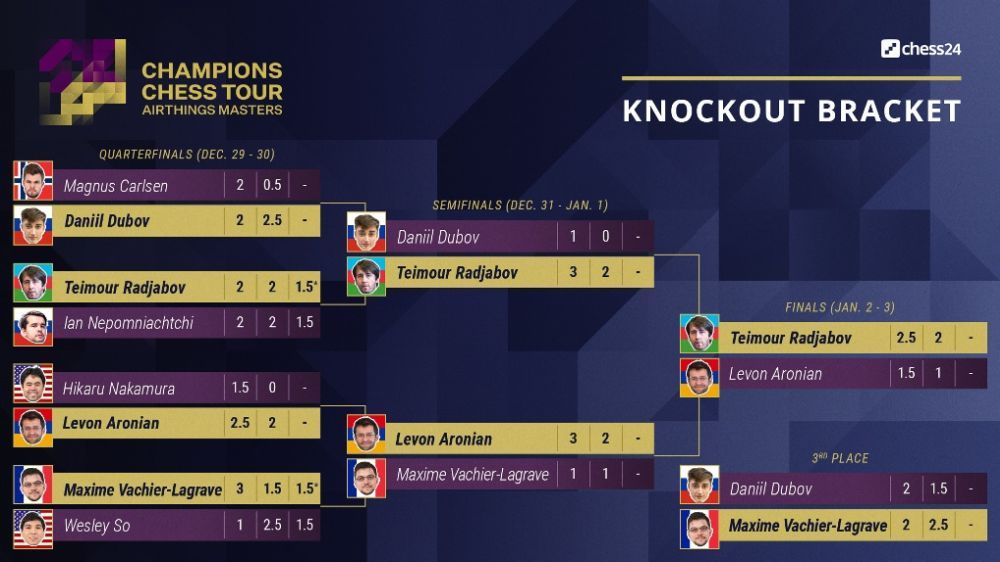 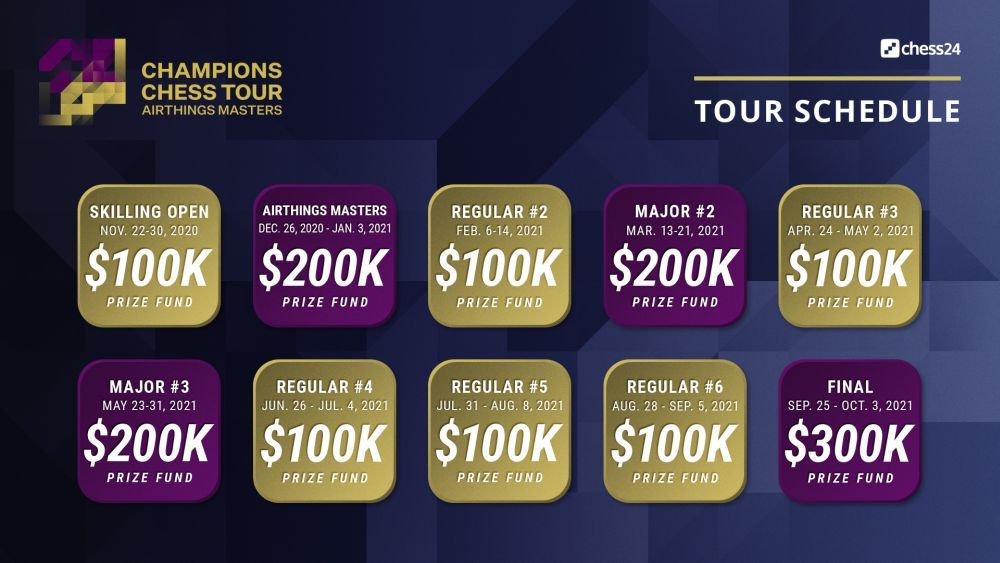 Next one is a Regular event which starts on 6th February | Photo: Champions Chess Tour