Carlsen topped the Preliminary stage of the Champions Chess Tour Skilling Open with 9.0/15. Nakamura finished at the second position also with 9.0/15. So, Nepomniachtchi and Aronian finished the Round-Robin stage with 8.5/10. Radjabov, Vachier-Lagrave and Giri advanced to the Knockout stage with 8.0/15 respectively. Quarter-Final games will begin tonight Wednesday 25th November from 10:30 p.m. IST with live commentary by IM Sagar Shah, Amruta Mokal and IM Soumya Swaminathan on ChessBase India youtube channel. Each encounter will have four Rapid games. Who do you think will win the matches today? Photo: chess24 live stream

Giri advances without winning a game on Day 3

Anish Giri barely managed to get into the top eight to advance to the knockout stage as he lost two games in succession and drew the other three games to finish the preliminary stage with 8.0/15. Both Carlsen and Nakamura finished the Round-Robin stage with 9.0/15 each respectively. Carlsen will face Giri in the Quarter-Finals while Nakamura will face Maxime Vachier-Lagrave. So, Nepomniachtchi, Aronian and Radjabov are the remaining four players to advance to the knockout stage. 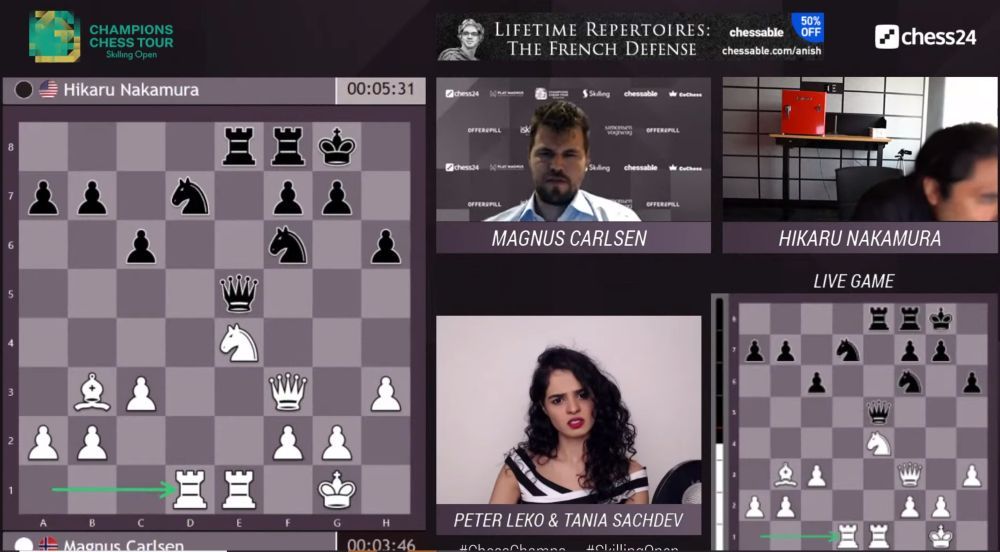 Svidler made a simple pawn blunder which Vidit capitalized with ease and the Russian resigned after 21st move. 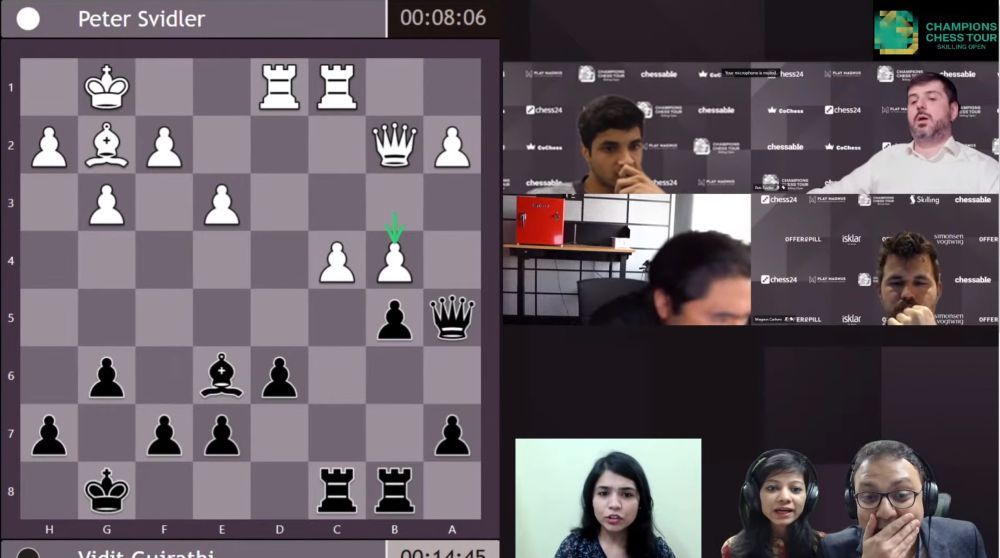 Nepomniachtchi faltered in a completely winning basic rook endgame and allowed a draw. 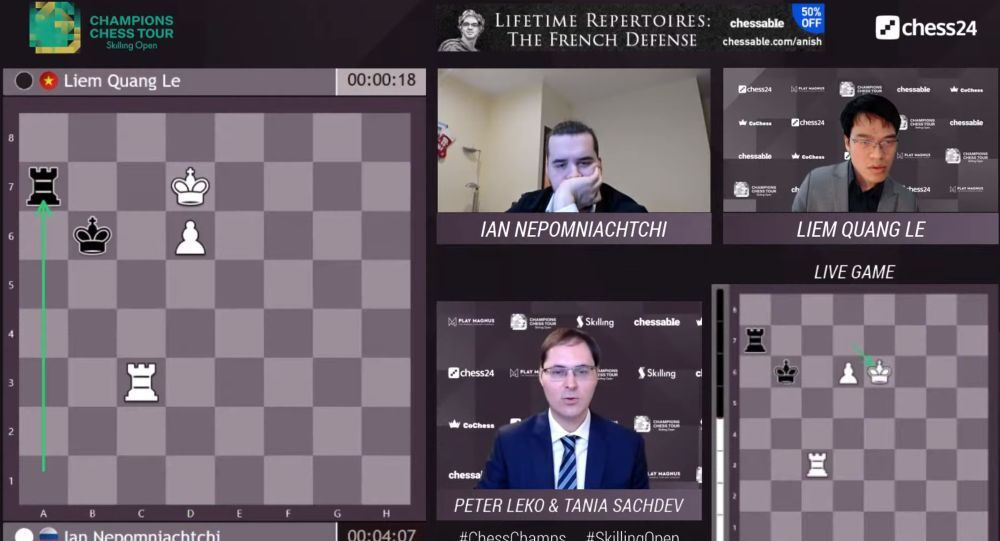 The game continued with 62.Ke6 which allowed black to save the day. What was the winning continuation for white?

Carlsen was in a bit of a pickle when he allowed Nakamura to gain advantage using tactics.

Find out why 18.Rad1 is a mistake. Carlsen somehow managed to get away from trouble and salvage a draw.

Karjakin made an unforced error which allowed Radjabov to gain the upper hand. 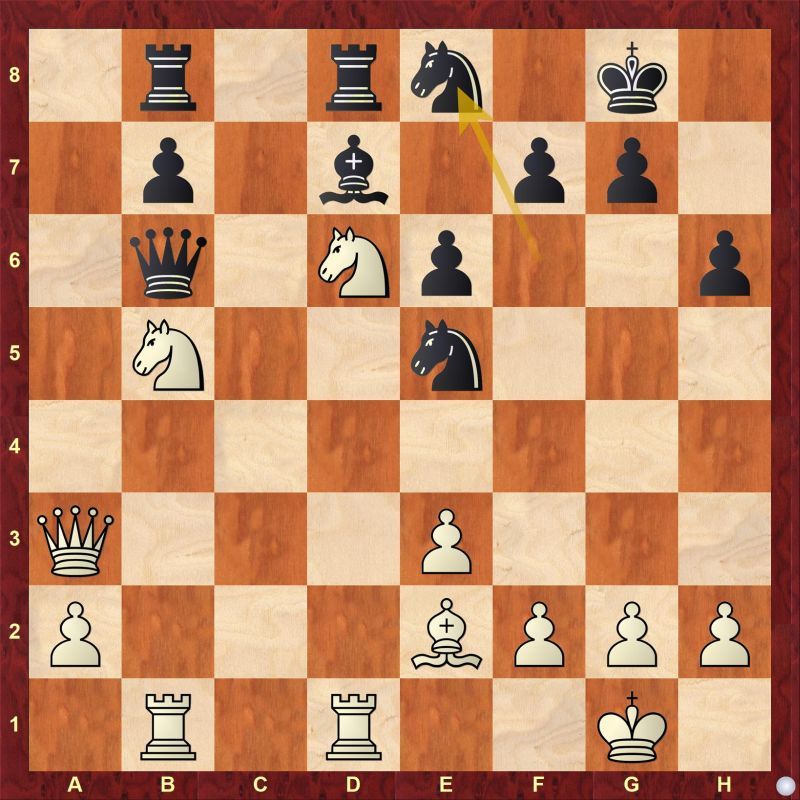 Ding Liren made a couple of errors in time trouble which turned the seemingly equal position in Firouzja's favor. 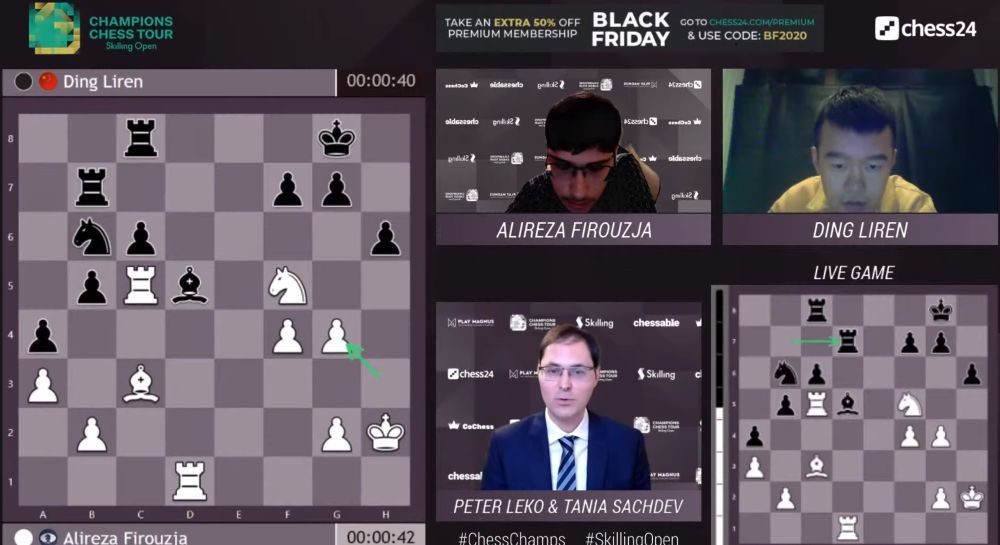 White is threatening Nd6 and also the g7-pawn. Which one should black defend? Ding Liren defended this position incorrectly and eventually blundered into a mate in one to lose the game.

Aronian played beautifully and cramped up Duda's pieces to score a victory. 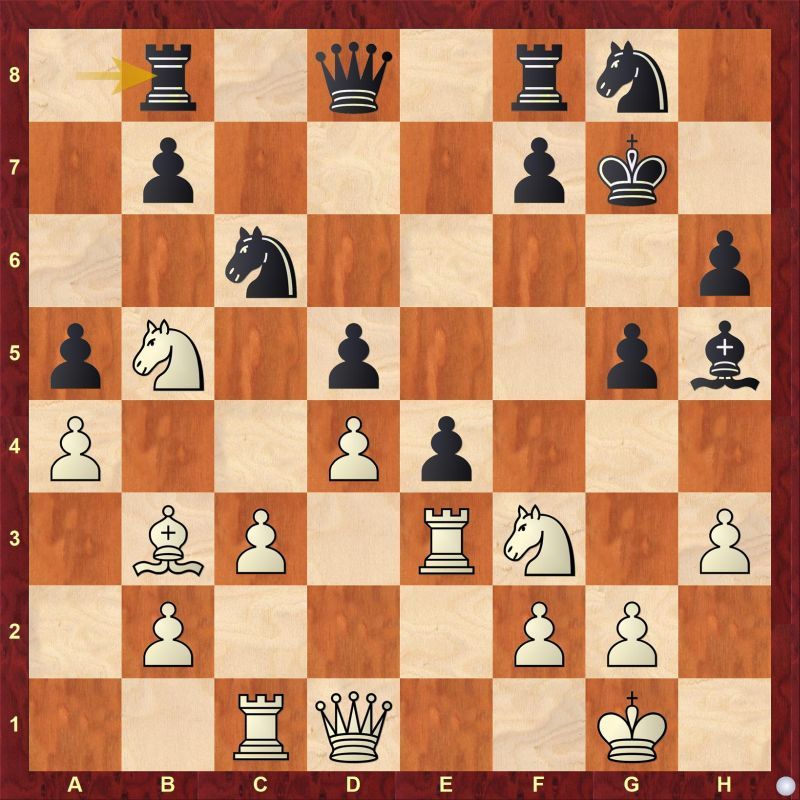 Find out white's best plan and how should he continue here. 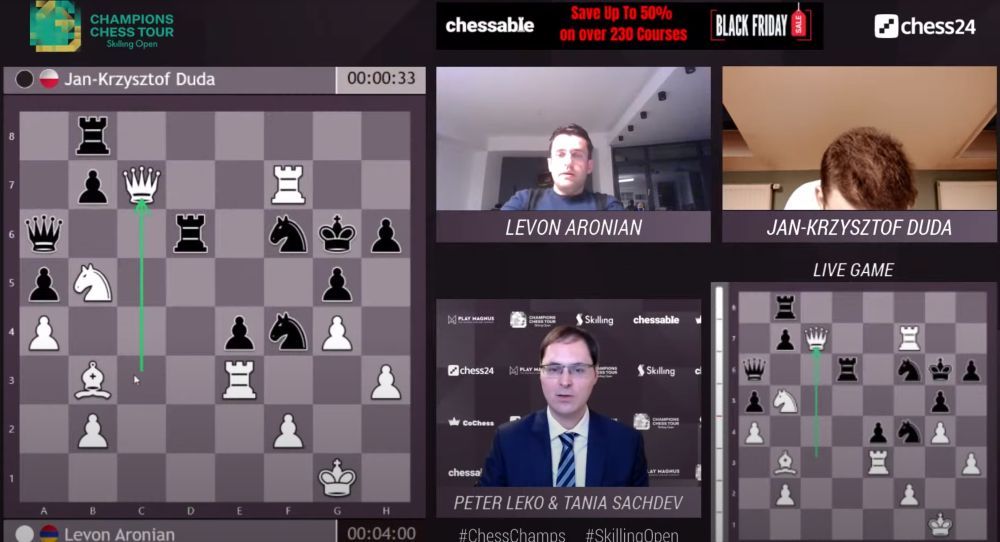 Vachier-Lagrave scored a fine victory over Duda as he overstretched his pawn. 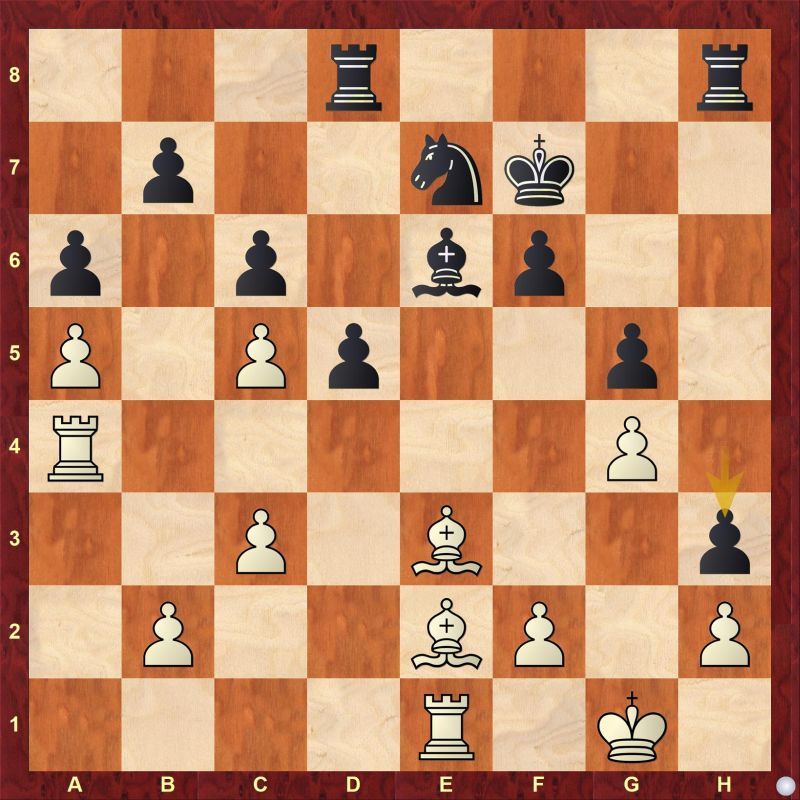 Find out why 29...h3 is a mistake and what black should have played instead.

Giri got quite a few good chances against Firouzja but he couldn't capitalize on them. 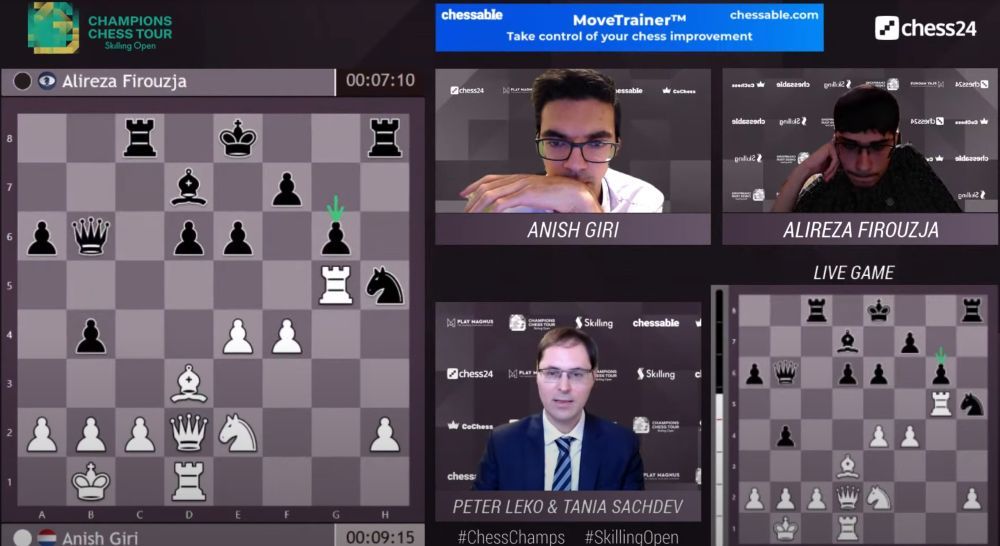 The game continued with 20.Ng3 and Giri did the breakthrough in the next move. What could he have done now? 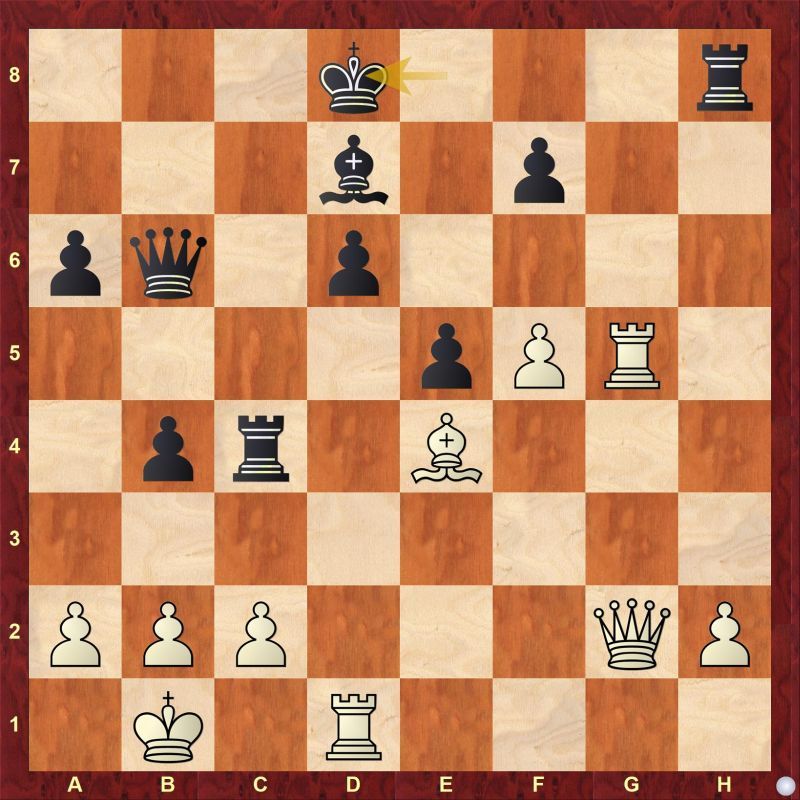 How should white continue the attack here? The game continued with 26.Bd3 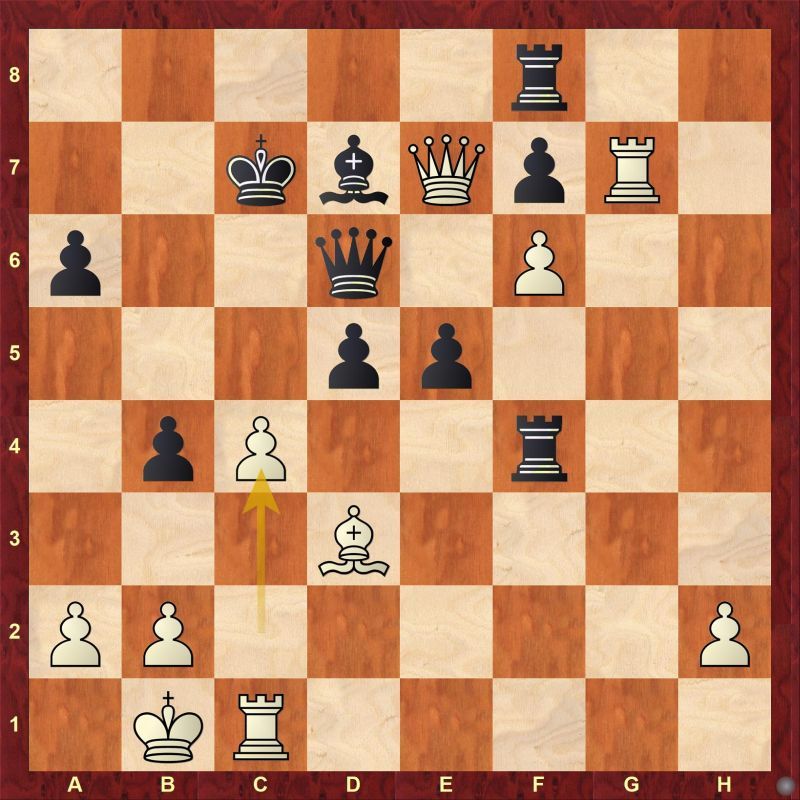 32.c4 ended all hopes for white and things turned into black's favor.

In a completely winning position, Karjakin made a terrible blunder against Anton. 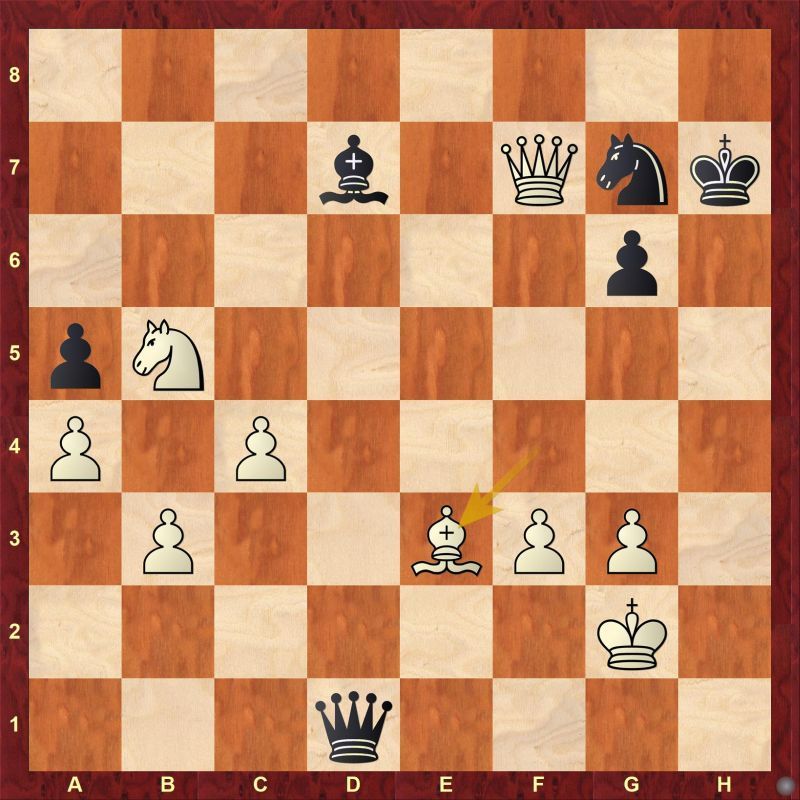 Find out why 46.Be3 is a game losing blunder.

Once again Vidit managed to get decent position out of the Grunfeld, this time against Nepomniachtchi. 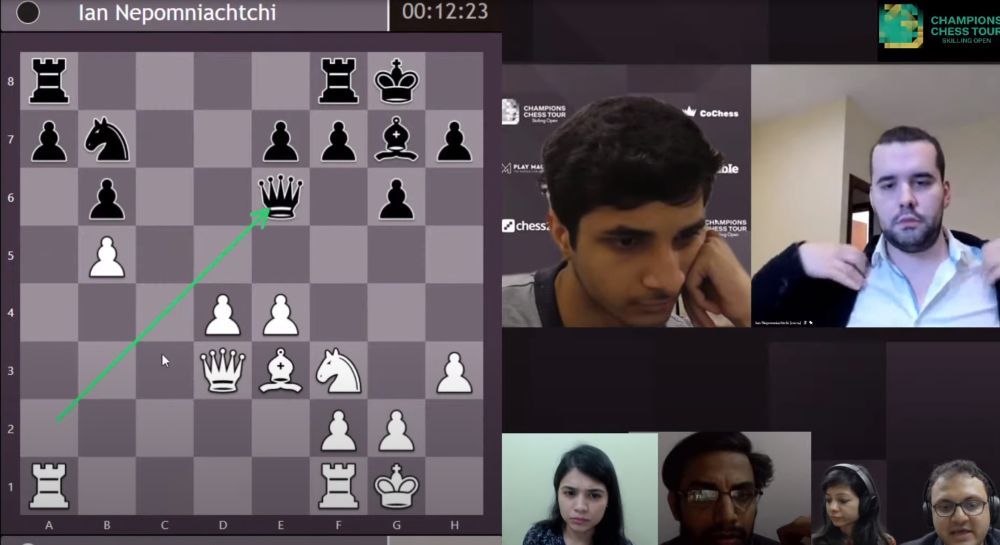 Svidler scored a fantastic win against Vachier-Lagrave but it was not without a mistake. 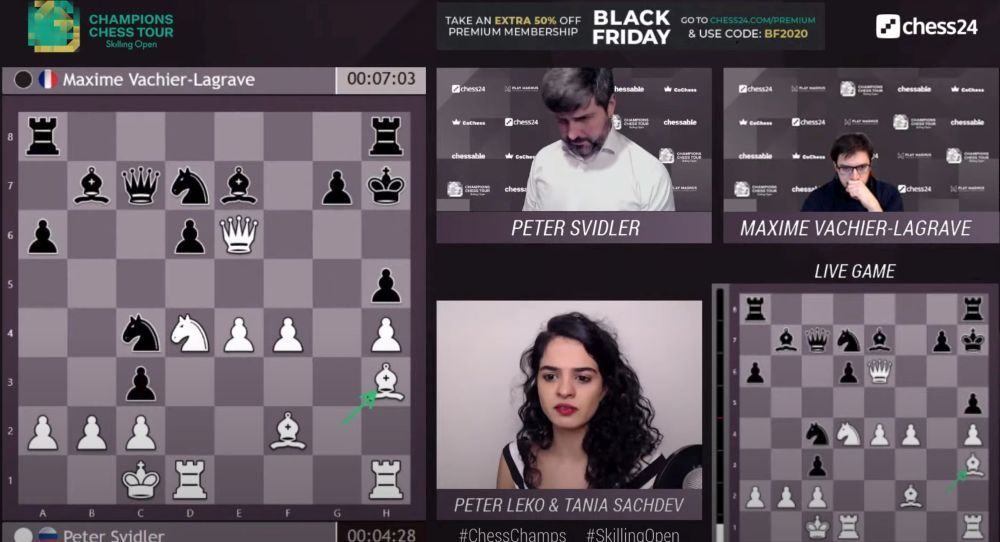 Find out why 23.Bh3 is a mistake and how can black get back in the game. Vachier-Lagrave made a bigger mistake and played 23...Bf6 returning the upper-hand to white.

So missed a completely winning Queen-Rook endgame two split pawns against Nepomniachtchi and eventually settled for a draw. 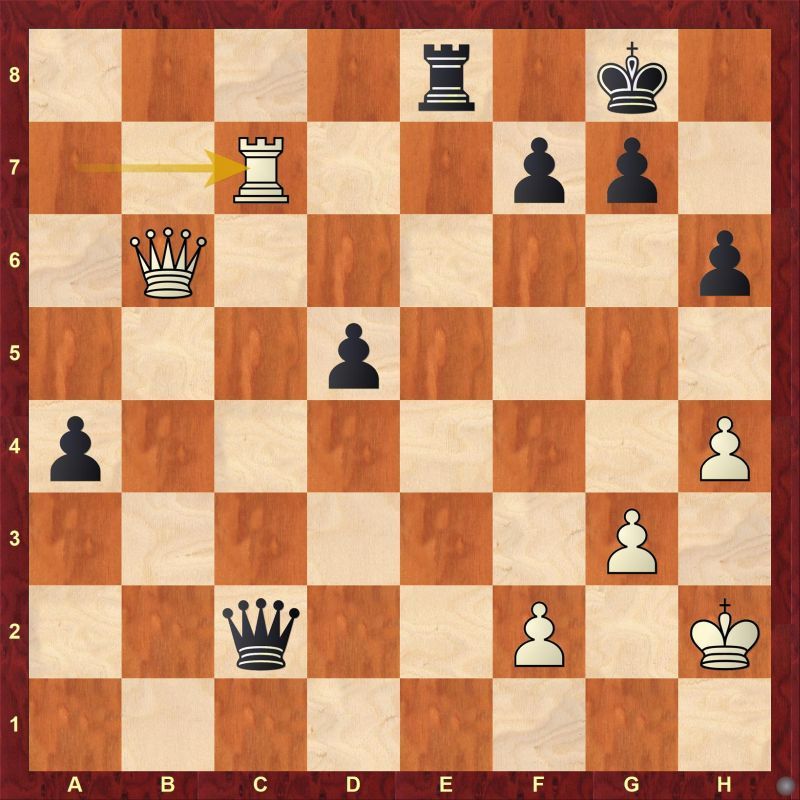 One would think that these are elementary wins for top players but no. Black misplayed here with 35...Qb3

Vidit misplayed at the beginning of the queen endgame which landed him in deep trouble against the world champion. 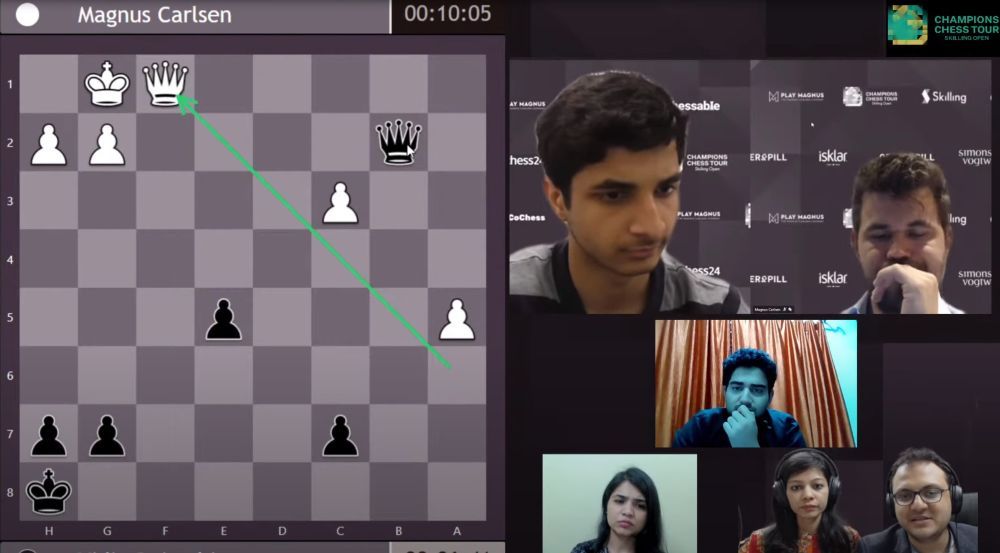 Find out what was the best way for black to save the checkmate threat. 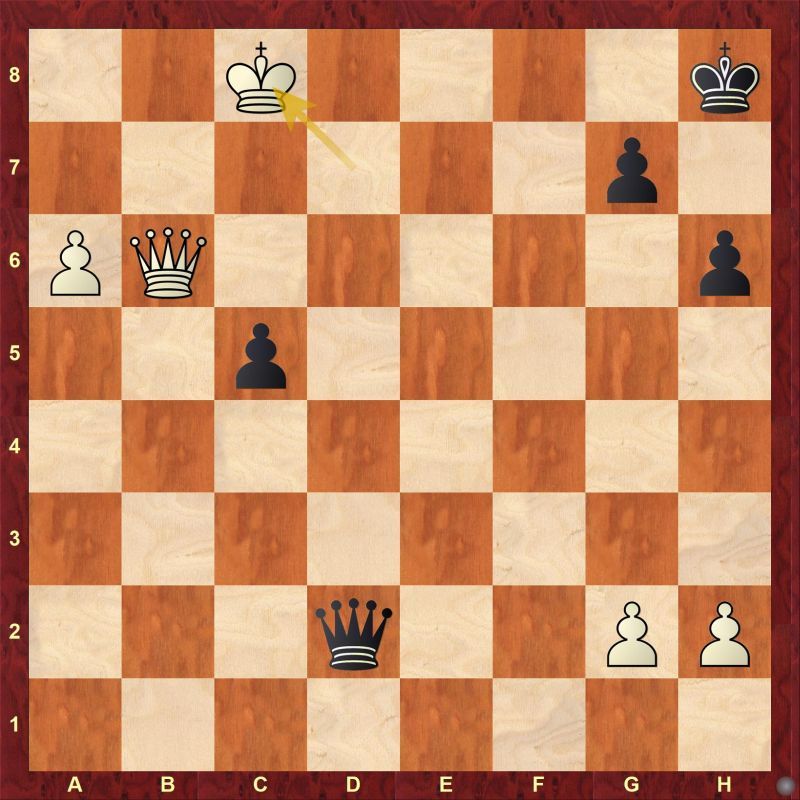 Black has one last opportunity to save the game. How?

Radjabov got a winning opportunity against Liem in the endgame but he missed it. 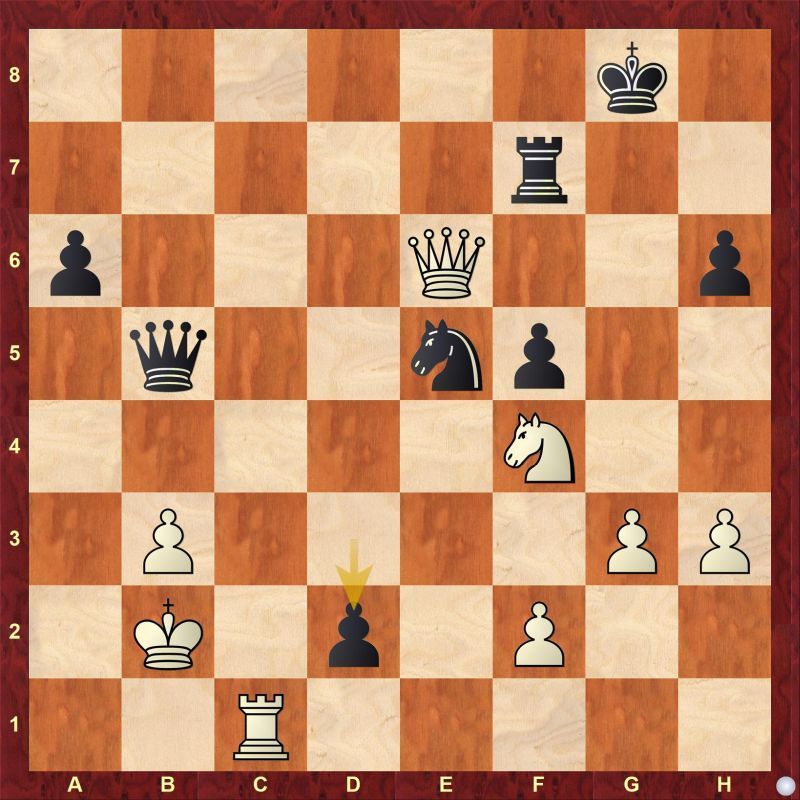 Find out the best continuation for white after 39...d2

Firouzja beat Karjakin after the latter blundered an important pawn in the endgame. 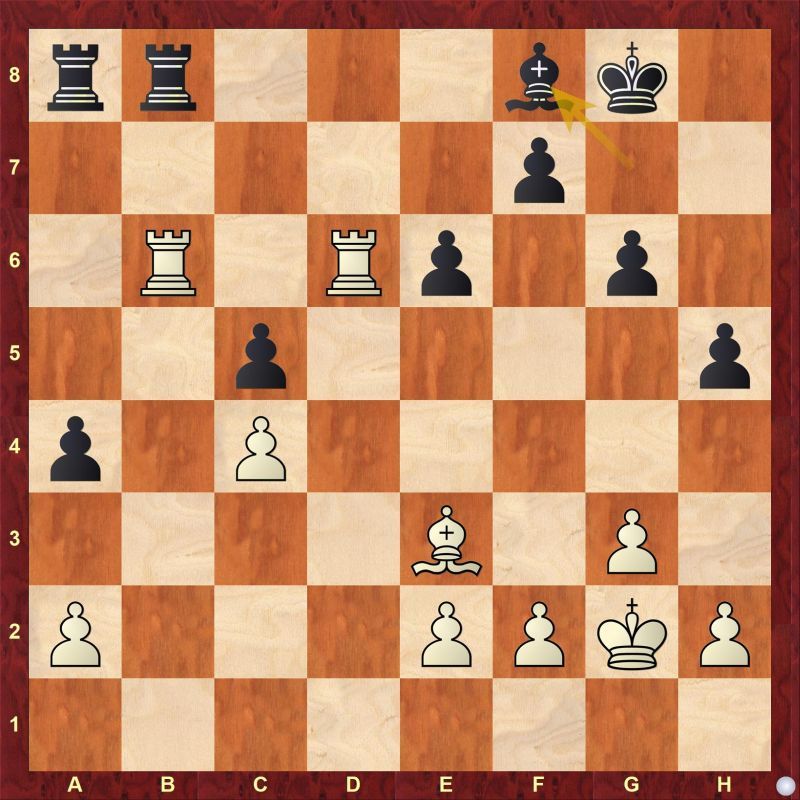 Find out why 26...Bf8 is a mistake and what black could have played instead.

Giri underestimated Aronian's attacking potential on the kingside which eventually caused the Dutch his second consecutive defeat of the day. 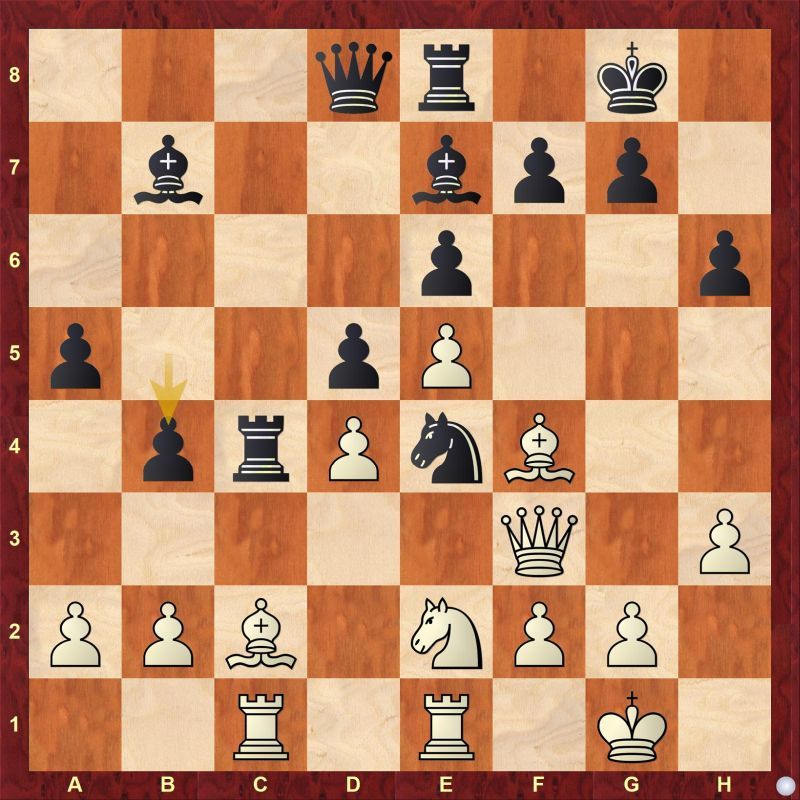 At a first glance, 25...b4 might seem harmless but it actually gives two choices of attack - a safer one and an adventurous one. Can you find them both?

Duda scored his first win of the day and second win of the tournament when he beat Ding Liren in Round 13. 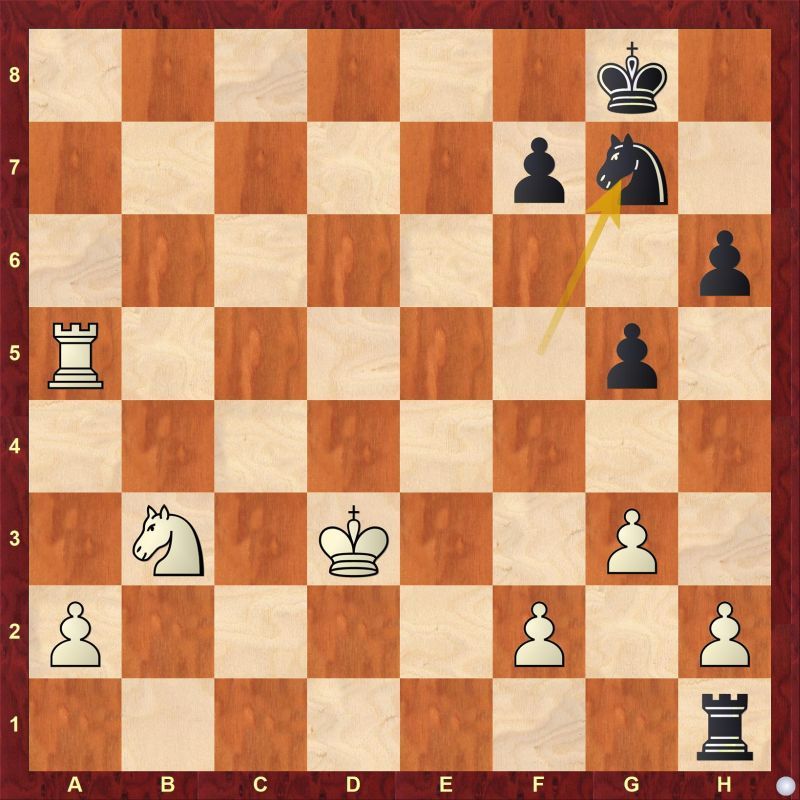 Black went uber passive with 45...Ng7 and abandoned all hope to salvage a draw.

Karjakin missed tactics and the balance shifted in favor of Aronian. 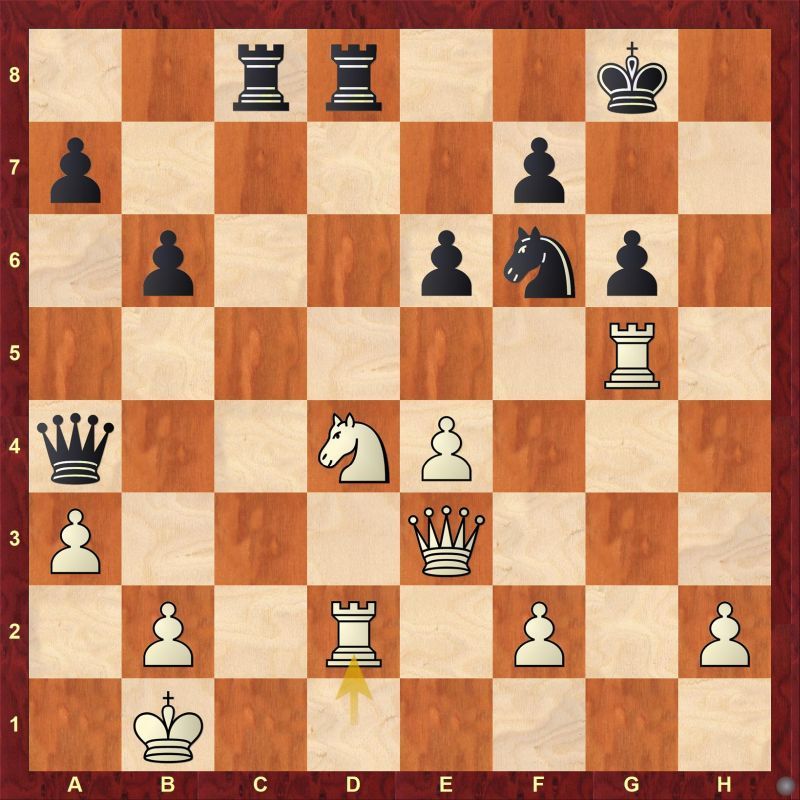 Find out why 26.Rd2 is a mistake. White resigned after five more moves.

Firouzja made an irrevocable tactical error and Nakamura is known not to miss those. 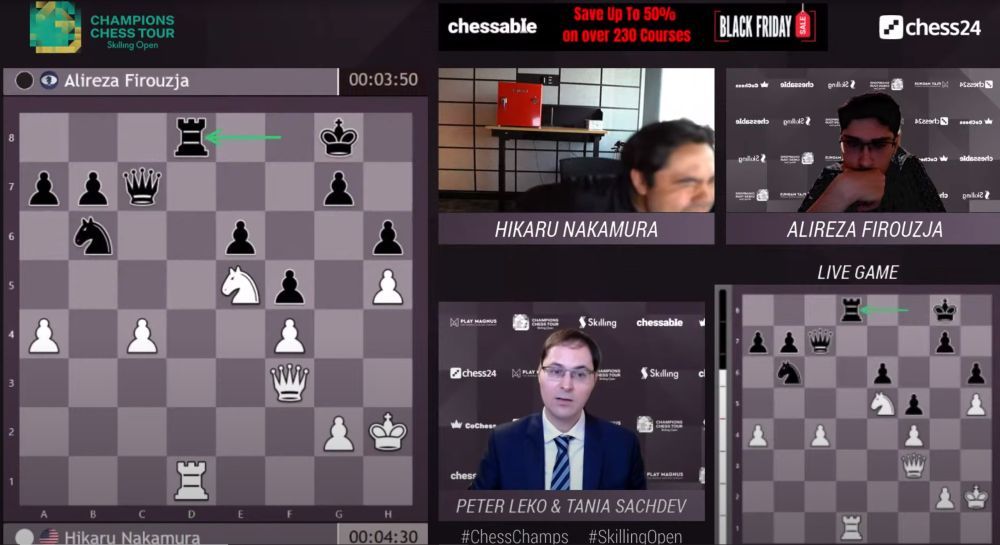 Sometimes not doing something becomes difficult. Overdoing things can also have a negative effect. Anton overdid the position which created a window of opportunity for his opponent Liem. 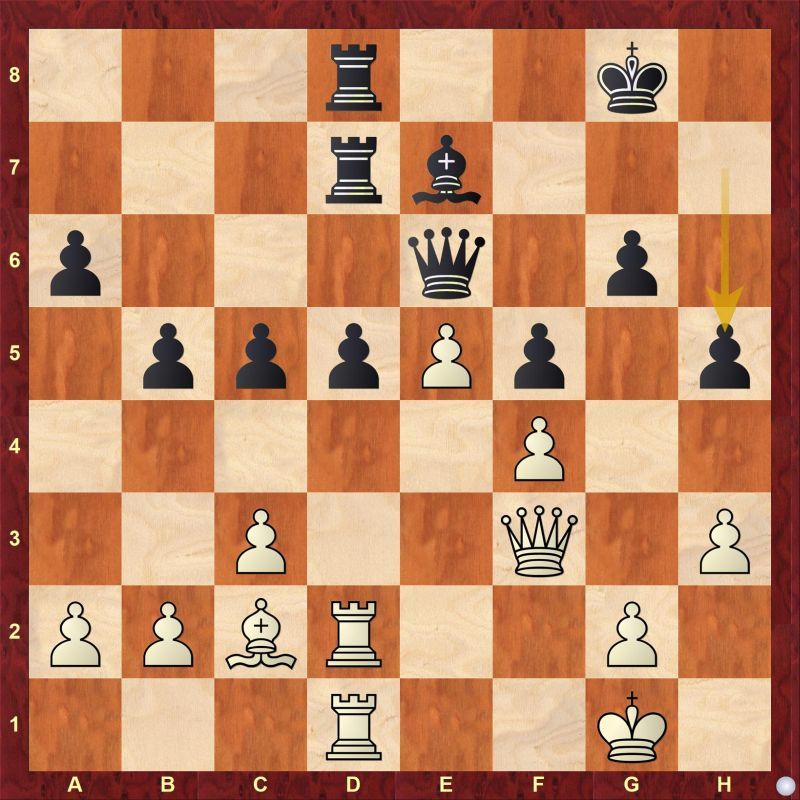 Radjabov had a completely winning position against Vidit before he repeated moves and made a draw. 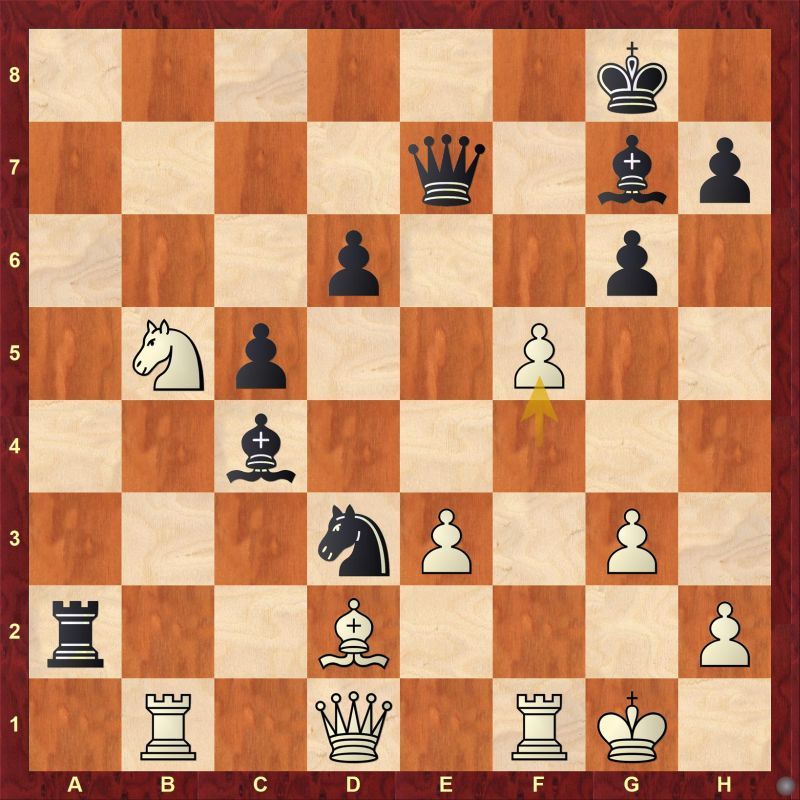 Find out the best continuation for black after 26.f5

Round 15: Three wins only by black

Despite being better for the better part of the game, Anton squandered all his chances and lost to Vidit. 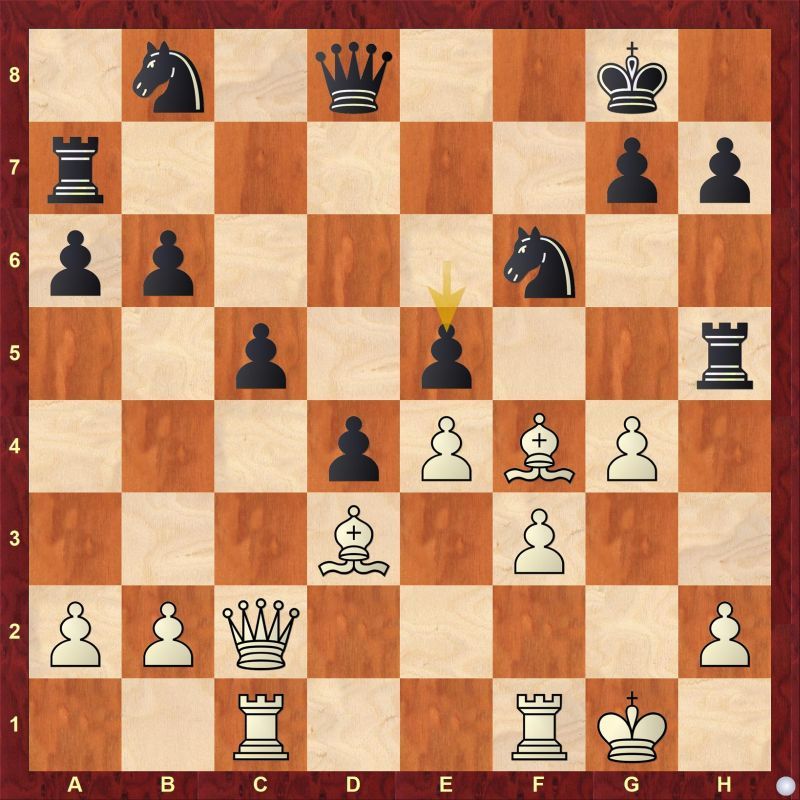 Firouzja suffered his second consecutive defeat of the day against Liem and his chances of advancing to the knockout stage diminished as Liem gave him no chance.

Duda lost to Karjakin and finished at the bottom of the preliminary stage.

Despite losing two games on day 3, Giri finished the preliminary stage with a draw with Ding Liren and advanced to the knockout stage.

Standings after the Preliminary stage