Radjabov-Aronian Finals witnessed some solid games. There were no simple tactical errors or blunders made on the first day of the Finals of Champions Chess Tour Airthings Masters. These two played against each other in the Prelims for the first time since 2017 in any kind of serious tournament. Aronian must win the second set today to force tie-breaks. Airthings Masters winner will be decided tonight as the Finals continue on Sunday 3rd January from 7:30 p.m. IST. Watch the live stream on ChessBase India youtube channel with IM Sagar Shah, Amruta Mokal and IM Soumya Swaminathan. Photo: ChessBase India Live stream

An Armenia vs Azerbaijan match can be compared to an India vs Pakistan or Australia vs England (Ashes series) in Cricket, Brazil vs Germany or Manchester United vs Arsenal football match. In case you are wondering, Armenia and Azerbaijan rivalry has been there for quite sometime, recently things escalated about the Karabakh conflict where both Armenian and Azerbaijani chess players were vocal about their support. Armenia did not take part in Baku Olympiad 2016. The last game they played in an over-the-board tournament was in 2017. This is not the place to talk about which side is right but still mentioned these things just to put things into perspective. Anyway after three draws, Aronian did not want to repeat moves to make another draw and eventually lost the game. Meanwhile, Dubov and Vachier-Lagrave traded two wins each without making a single draw in their battle for third-fourth place.

First game did not yield a result. It was a well contested draw.

The second game was a tepid draw.

Third game started in the same way as the first game. However Aronian deviated from it with 17...Bd7. 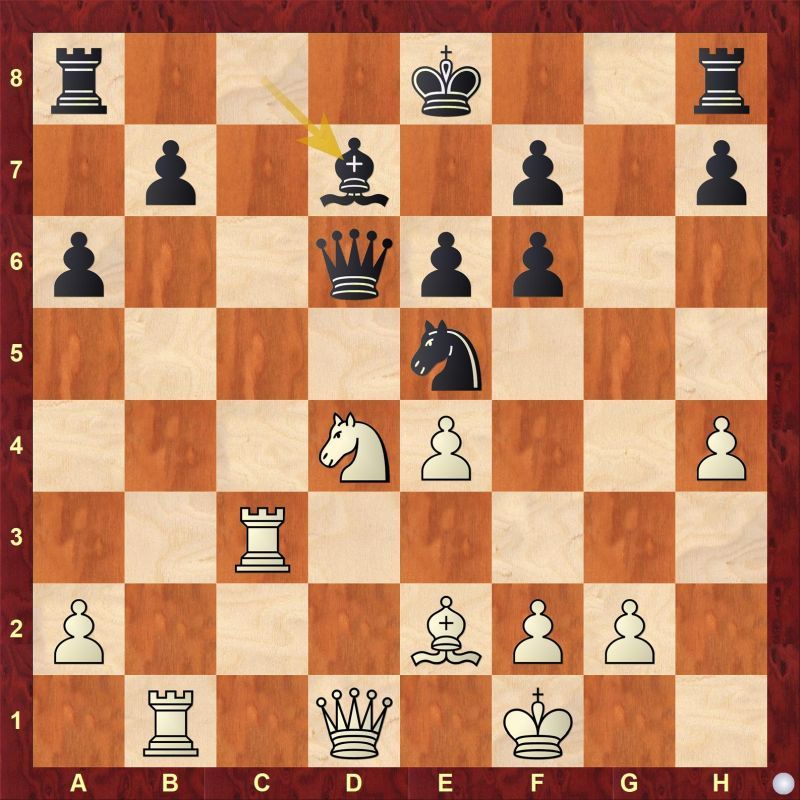 The result did not differ, as it turned out to be another draw.

Aronian could have repeated moves and settled for a draw in the fourth game. However, he overstretched his pawns and created lots of weaknesses. 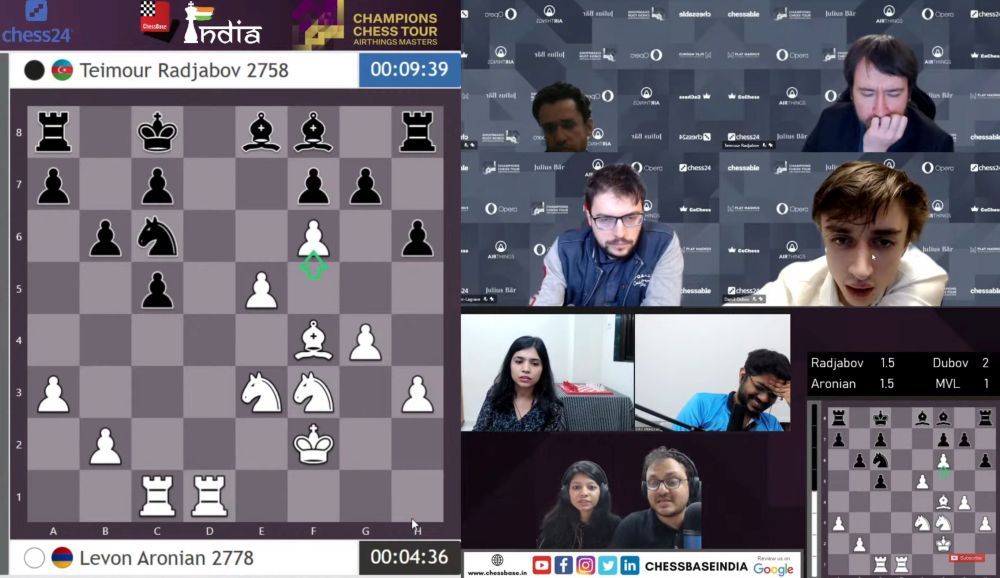 23.f6 does no good for white. In fact, it only helps black as Radjabov correctly found a better placement of his e8-bishop to e6. Aronian frantically pushed a lot of pawns and created further weaknesses, eventually losing the game.

Dubov in his usual style made a sound exchange sacrifice in the first game. It turned to be in his favor eventually as it was difficult for his opponent Vachier-Lagrave to find the defence. 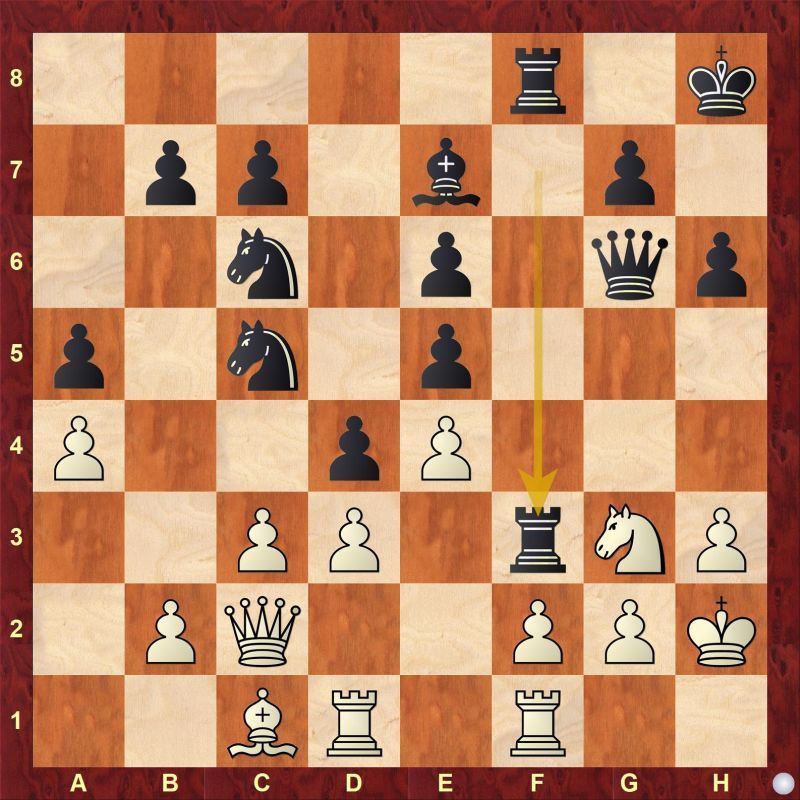 It may not look like 22...Rxf3 to be crushing for white immediately, however Dubov knew that he can make something out of it and he did in the game. The game continued with 28...Rxf2, however there was a better continuation for black here. What was it?

Dubov won the second game comfortably after Vachier-Lagrave made a strange king move. 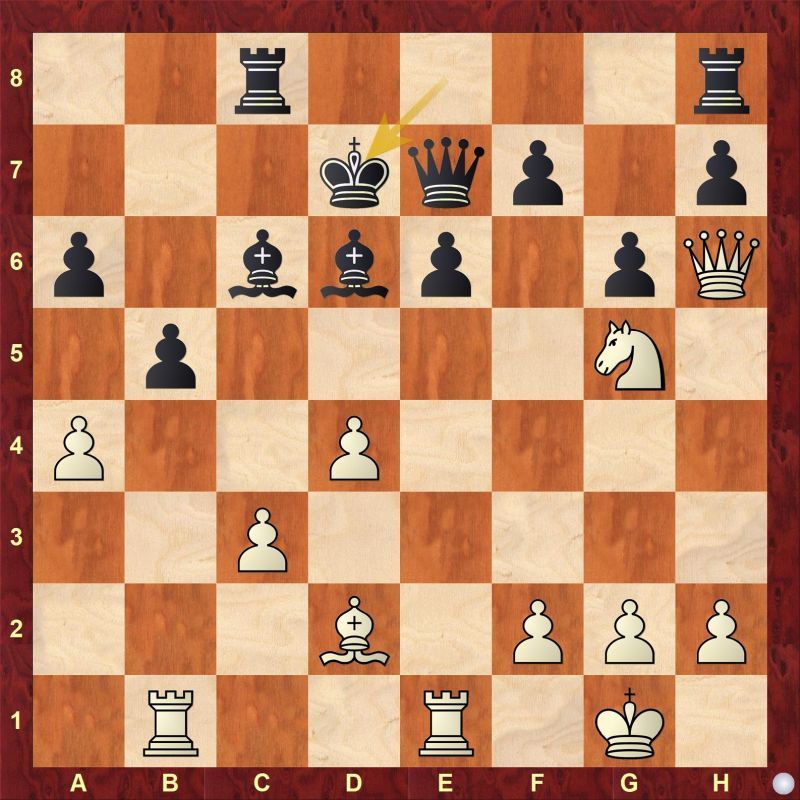 18...Kd7 was completely uncalled for. Find out what black could have done and the best plan for white in the above diagram.

In the third game, Dubov made a strange sacrifice in the opening. 9...Nxe4 does not help black in any way, if anything then it helps white as it completely destroys black's pawn structure on the queenside and creates weaknesses. Eventually white created a passed pawn on the queenside which became a deciding factor for Vachier-Lagrave to score his first win of the day.

Vachier-Lagrave got himself in deep trouble in the fourth game but Dubov did not manage to realize his advantage. 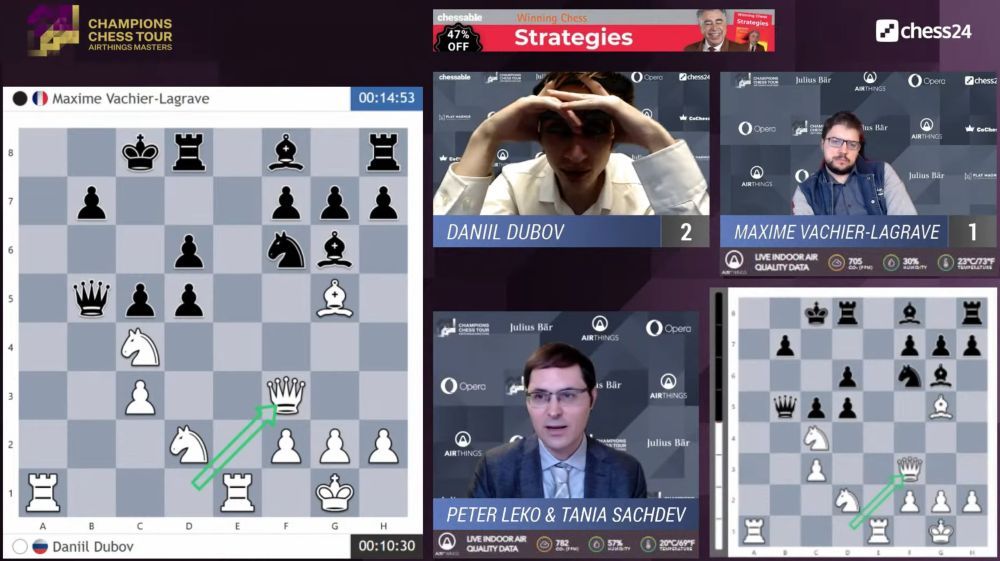 18.Qf3 was not the best move. What was the better continuation for white which could have possibly led to a different outcome?