FIDE Candidates will resume next month, however we are going to get a sneak peek at the Finals as Giri and Nepomniachtchi eliminated World Champions So and Carlsen from Meltwater Champions Chess Tour Magnus Carlsen Invitational. Carlsen's unlucky 30 curse continues as he is still yet to win a tournament since he turned 30 last November. Will the Candidates leave it all out to get a psychological edge before next month's Candidates or will they hold back punches? Finals start tonight from 9:30 p.m. IST with live commentary by IM Sagar Shah and Amruta Mokal on ChessBase India youtube channel. Photo: FIDE

Giri and Nepomniachtchi continued their previous day's momentum and beat So and Carlsen respectively to advance to the Finals. While Giri remained unbeaten and won the fourth game after three consecutive draws, Nepomniachtchi started strong with a draw and victory. However the Russian champion lost the next two games which forced tie-breaks. After a 142-move long marathon draw involving mouse slip which did not affect the outcome though, Carlsen's overstretch did not help his cause and he lost the second tie-break game clean. 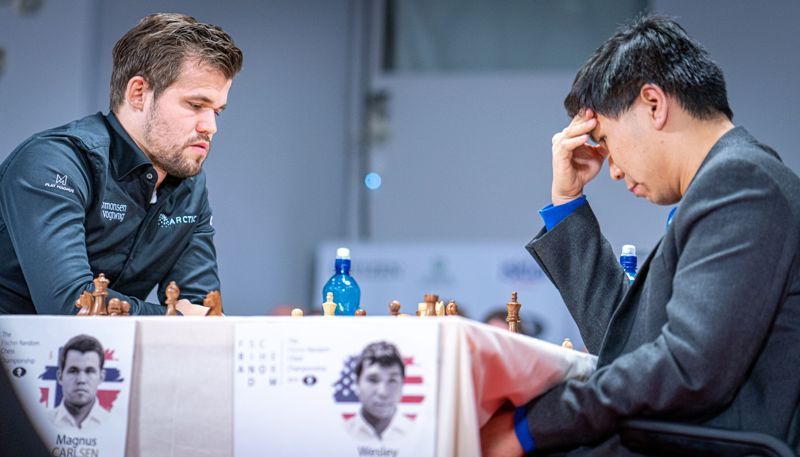 The first game between Nepomniachtchi and Carlsen was a lukewarm draw. 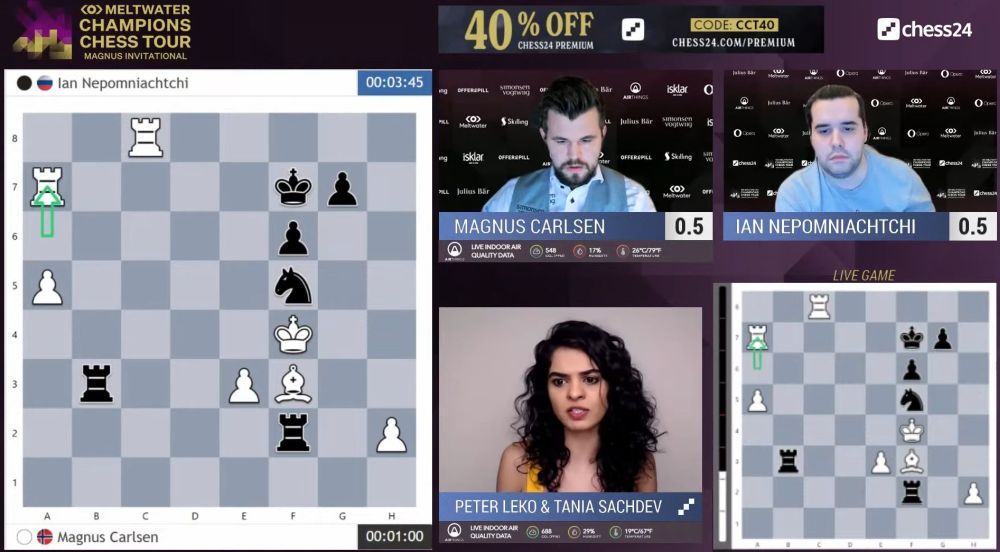 42.Rxa7+ was a big mistake as that allows black to get decisive advantage with 42...Kg6. Thus Nepomniachtchi took 1.5-0.5 lead in the second set and put Carlsen in a must-win situation. This time Carlsen had to win the next two games to force a tie-breaker.

In the third game, Nepomniachtchi blundered in a somewhat sharp position. He went after material when he should have got rid of the passed pawn. 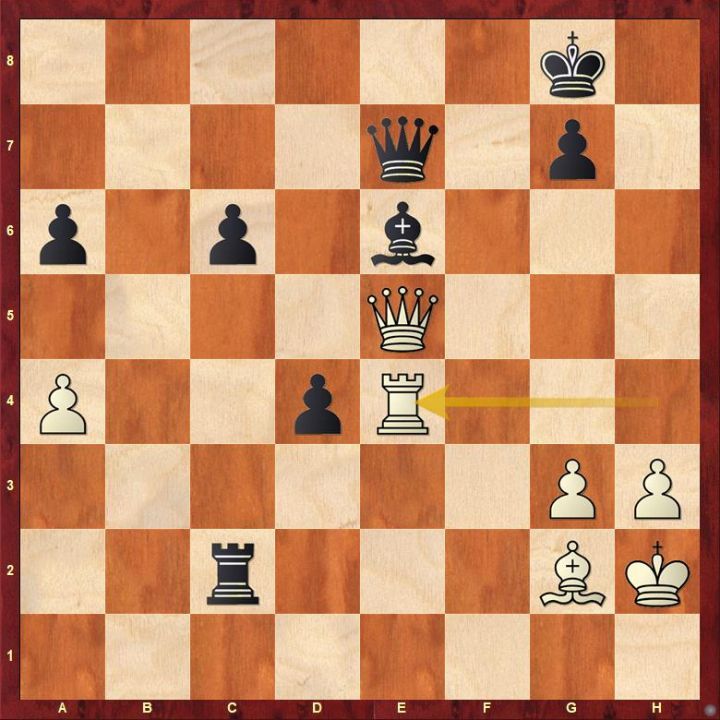 It is true that white is unable to capture on d4 as it is tactically defended. 39.Re4 does not help white's cause either as black can immediately play 39...d3 and go for a win which is exactly what happened in the game. Find out what white should have done instead. With this win, Carlsen equalized the set with 1.5-1.5, still needing another win to force tie-breaks.

Nepomniachtchi went awry in the fourth game and landed himself in deep trouble against the world champion. Black's position was already difficult to play but 17...b6 only made things worse for black. Rest was just a matter of technique and Carlsen converted it with ease and won the game in another 16 moves.

The first blitz game was heading towards a draw. Seven moves shy from a 50-move rule draw, Carlsen mouse-slipped and lost his rook for nothing.

106...Rb6 of course happened due to mouse slip. Black's intention was to play 106...Rc6. However it did not change the outcome of the game. Black only needed to 36 moves more to make a draw after moving his lone knight carefully by keeping it close to the king.

Carlsen overstretched in the Queen endgame which cost him the game and a place in the Finals.

59.Kf5 just doomed the position for white. After 59...Qb5 white has no way to save the game. Nepomniachtchi advanced to the Finals and Carlsen will now play against So for the third-fourth place match.

So had a good opportunity in the first game against Giri but he was unable to seize it. 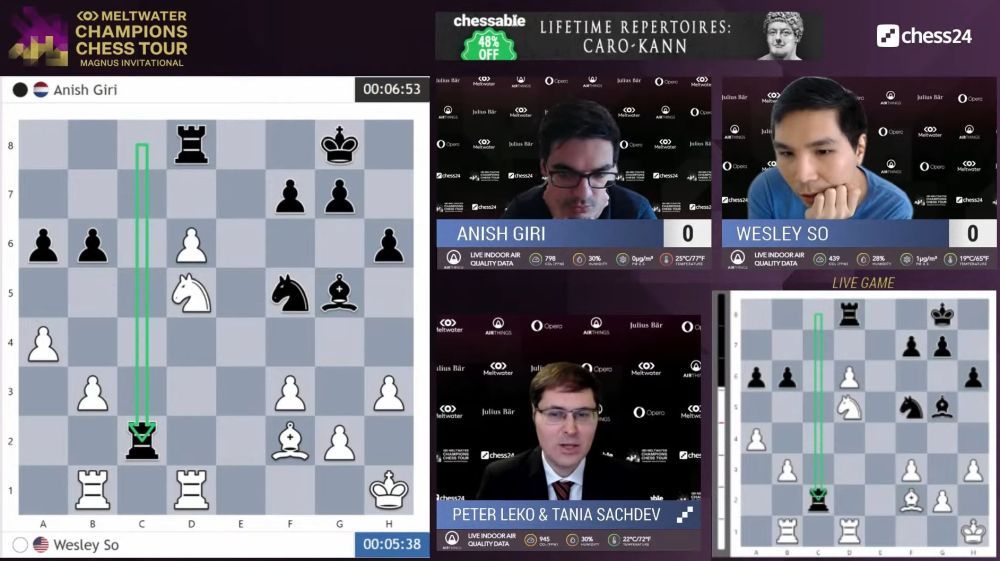 White's bishop at f2 is under attack but that should not be the primary concern. What black needed to do was take the d6-pawn with 35...Rxd6. 35...Rc2 is terribly wrong for black if white can capitalize on it. How?

The second game was an uneventful draw.

The third game was a well fought draw. The score became 1.5-1.5 which means So was in a must-win situation to force tie-breaks.

In the fourth game, in an advantageous position, So made a one-move blunder and lost the game. Thus he got eliminated and Giri advanced to the Finals. 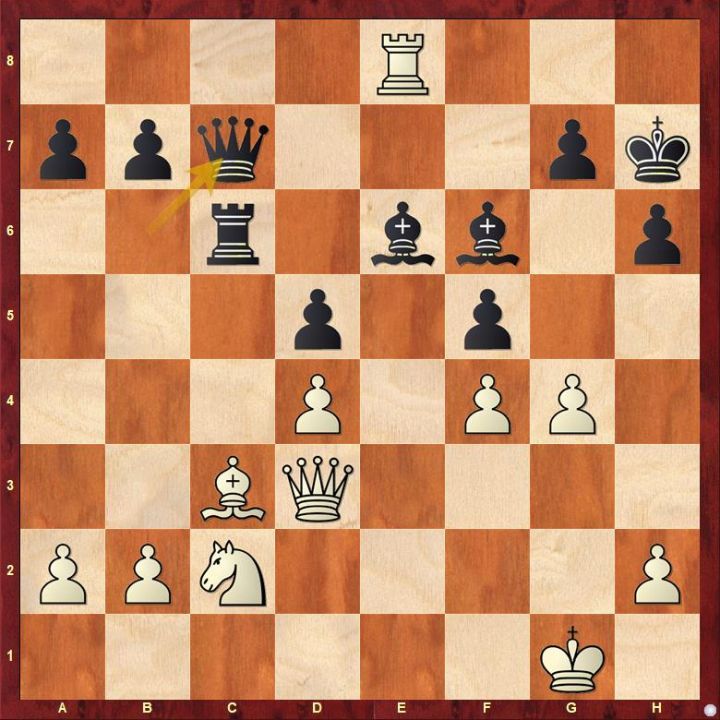 Silly mistakes like 26...Qc7 occur a lot in online chess than over-the-board events at least among the world's best. Black could have simply played 26...Qa6 and everything would have been fine. 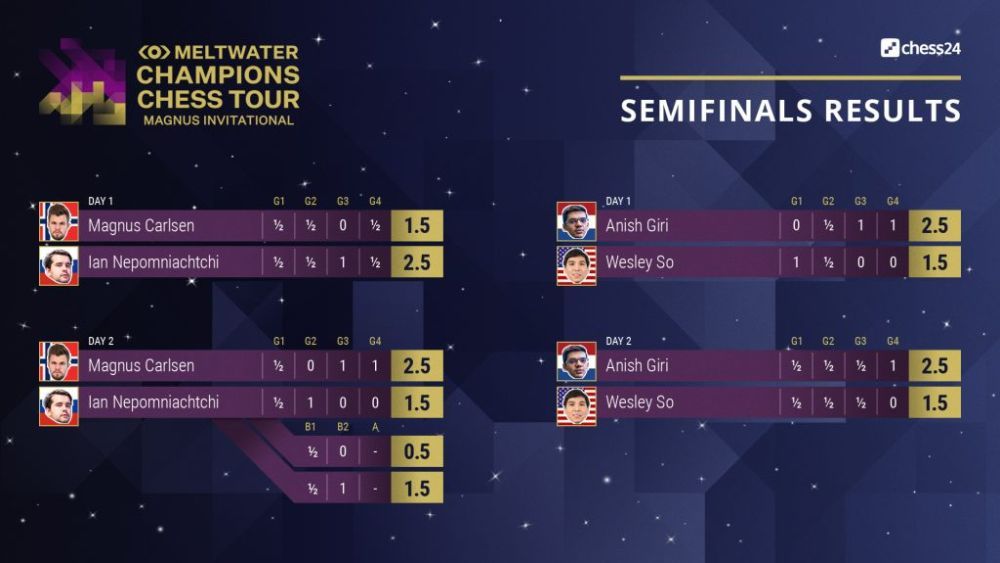 Nepmniachtchi and Giri will play for the championship | Photo: Champions Chess Tour

It will be Nepomniachtchi vs. Giri at the Finals | Photo: Champions Chess Tour