Harikrishna, Grischuk, Giri and Anton get eliminated from Champions Chess Tour Airthings Masters as they could not finish in the top eight of the Preliminary Stage. Carlsen finished the top of the table with 6.5/11 followed by So and Nakamura also finishing with the same score. Carlsen will face Dubov, Radjabov against Nepomniachtchi, Nakamura vs Aronian and Vachier-Lagrave will go against So in the Quarter-Finals which starts tonight Tuesday 29th December from 7:30 p.m. IST. Watch the live stream on ChessBase India youtube channel with IM Sagar Shah, Amruta Mokal and IM Soumya Swaminathan. Photo: ChessBase India Live stream

Day 3 of the Champions Chess Tour Airthings Masters witnessed 8 out of 18 games were decisive which is an increase of 31.94% since the previous day. It only means that when the stakes are higher, players tend to make more mistakes and thus more decisive results. Giri, Vachier-Lagrave, Nakamura, Anton and Dubov were involved in two out of three decisive games. Anton scored a win over Aronian in the final round but it was not enough for him to advance to the Knockout stage. Carlsen finished at the top of table with 6.5/11, followed by So and Nakamura who also finished the preliminary stage with the same score.

Round 9: Three wins for white

Vachier-Lagrave managed to thwart almost attempts by Giri, only to stumble at the end. 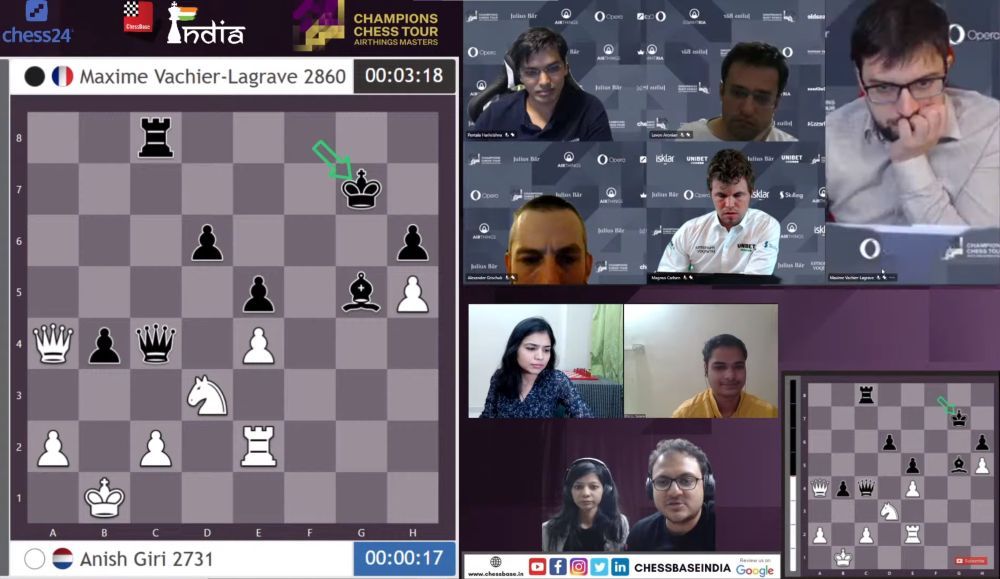 If black had played 45...Rc7, things would've been fine. However 45...Kg7 completely turns things into white's favor and it's just a matter of time before white converts it into a victory.

Grischuk and Carlsen had a 114-move long marathon draw. Although the world champion had a couple of decent chances to turn things into his favor. 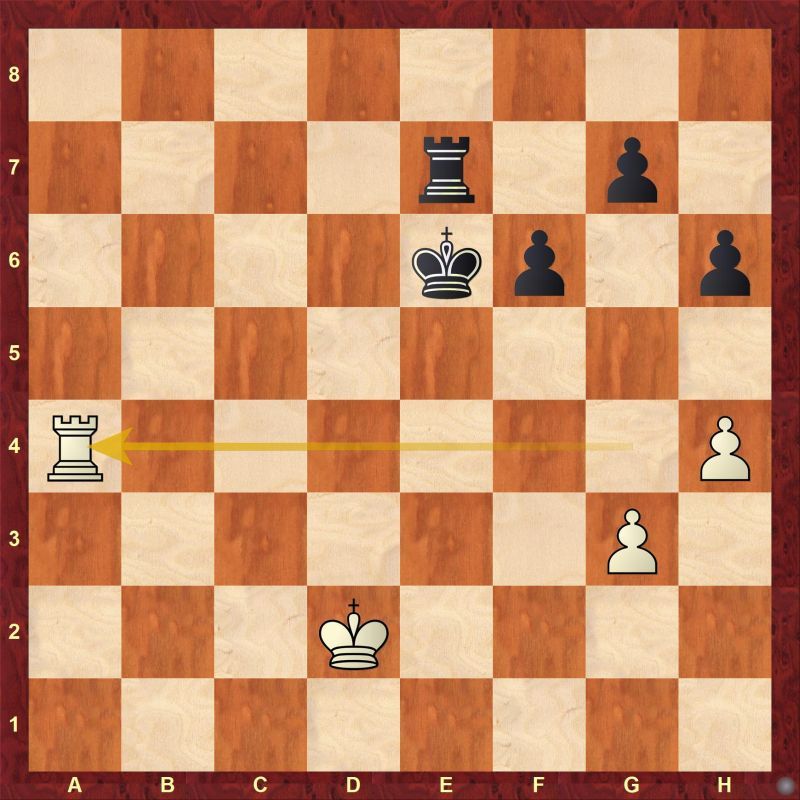 The game went on with 50...Kf7, however black could have done something else to push for advantage. 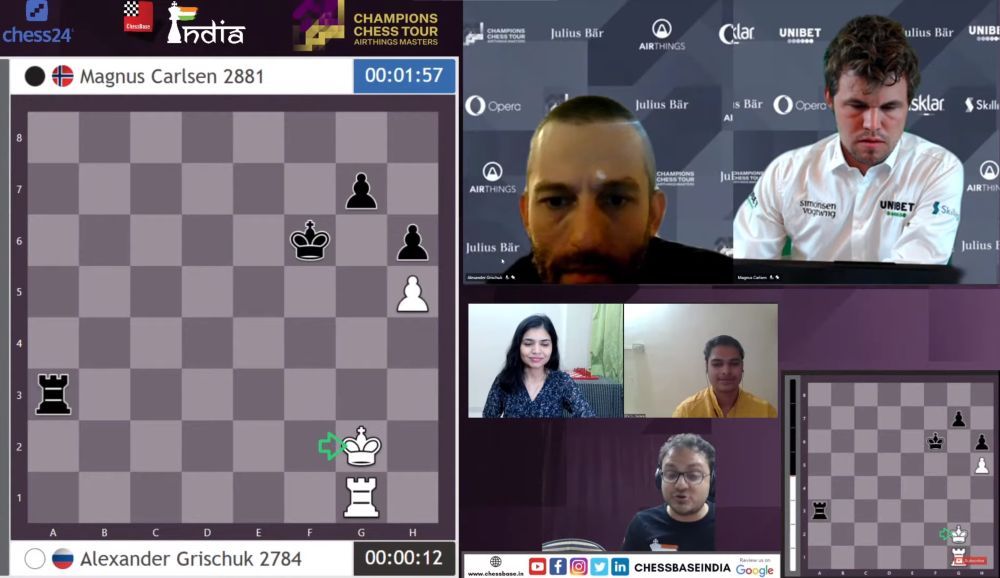 Grischuk's next mistake was 62.Kg2 and his opponent correctly played 62...Ra5 but after 63.Rh1 he did not choose the correct continuation. Instead played 63...Kg5. What was the better move?

Anton went wrong early in the opening and made an incorrect exchange which completely turned into Nakamura's favor. 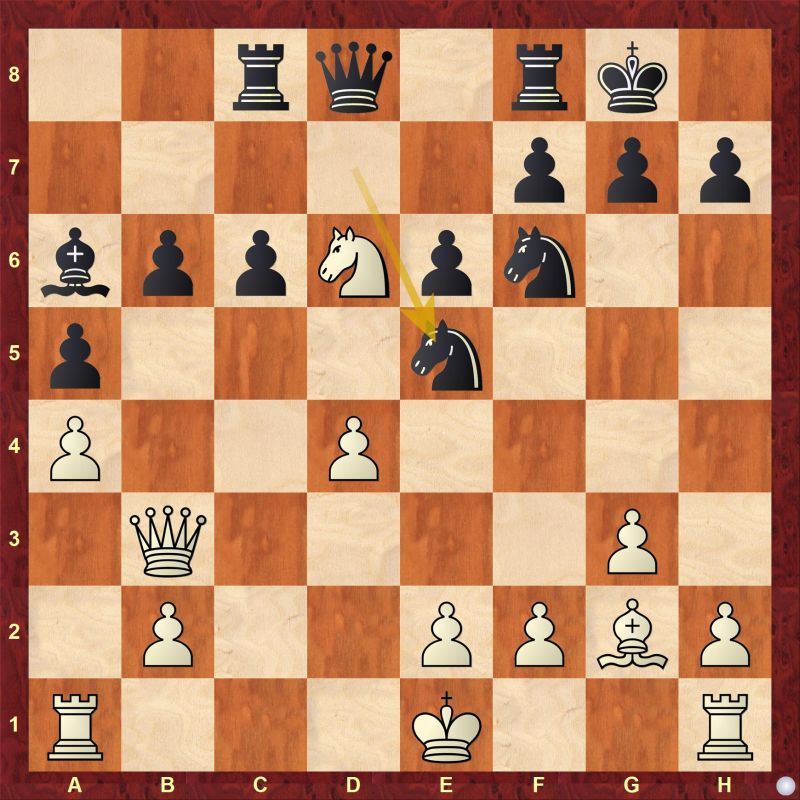 A simple 14...Rc7 would have sufficed but 14...Nxe5 only strengthens the d6-knight which does not bode well with the black pieces. He made an inaccurate sacrifice in three moves and arrived at a completely lost position. 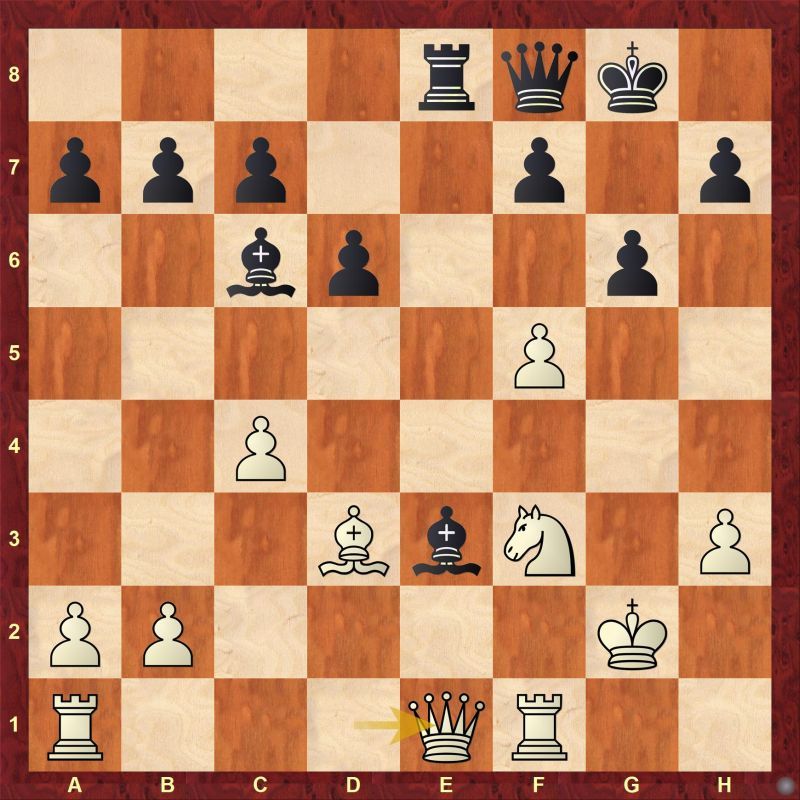 Black has already given up a rook. He needs to find resources to continue the attack. How? The game went on with 22...g5 which is not the best move.

Aronian and Harikrishna had a prolonged 82-move draw where neither side was ever in any kind of real danger.

Radjabov had plenty of chances against Vachier-Lagrave after the latter made an incorrect queen sacrifice. 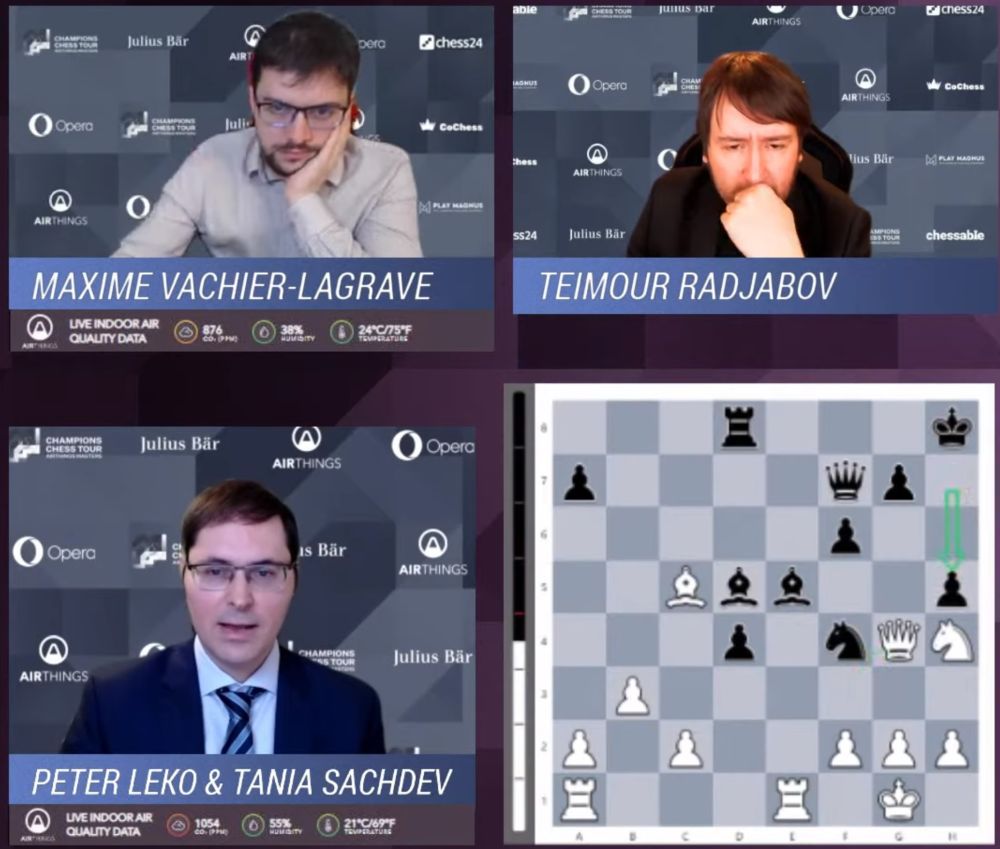 Although black's bishops and f4-knight may look menacing but 24.Qd1 would have been a quiet and good move. However in the game white went with the highly tempting 24.Qxf4 Bxf4 25.Re7 Bxh2+ 26.Kxh2 Qg8 27.Rae1 and white has compensation momentarily not a substantial one.

Harikrishna had a quiet draw with So.

Aronian blundered a pawn in the endgame but his opponent Dubov completely overlooked it. 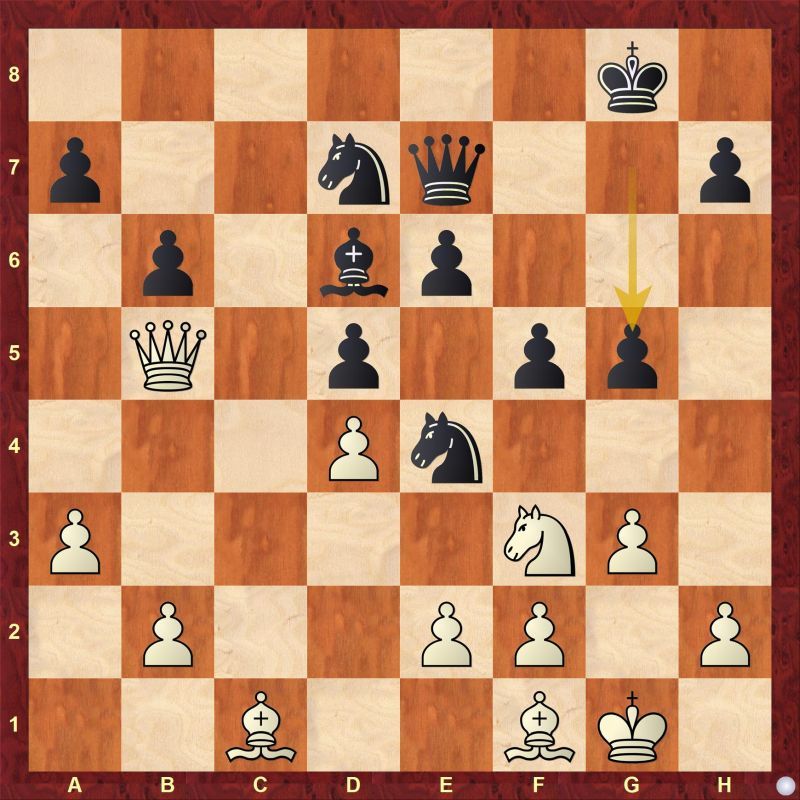 22...g5 is a mistake as the black queen is an overworked piece so white can easily grab the g5-pawn with 23.Bxg5. Who knows what would have happened if white had taken the pawn.

Anton had a very good opportunity against Nepomniachtchi. 20...d5 is a mistake as it allows white to launch a decent attack. Find out how.

Carlsen-Nakamura was cruising towards a draw till Nakamura blundered in the end. 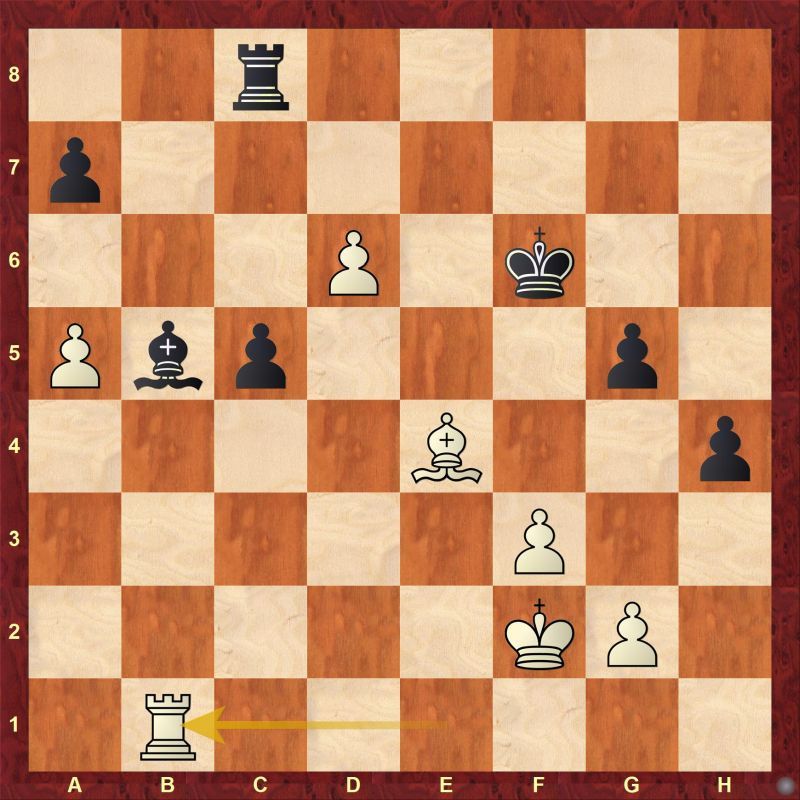 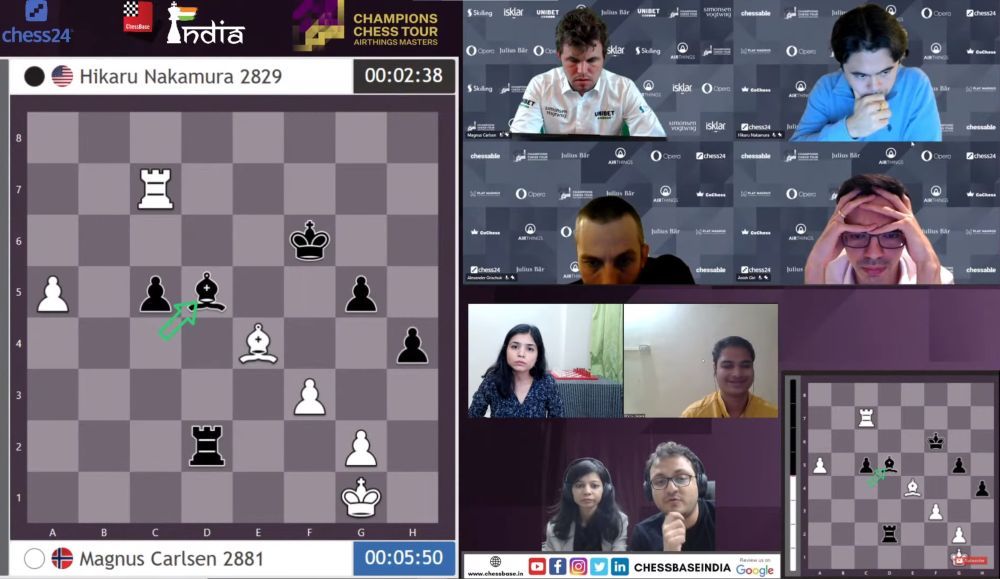 50...Bd5 is an obvious blunder. Nakamura once again went down to his nemesis Carlsen. However there is a possibility of facing them against each other in the Finals.

Grischuk was not at his best as he once again missed, this time against Vachier-Lagrave and it cost him the game and a place in the Knockout stage. 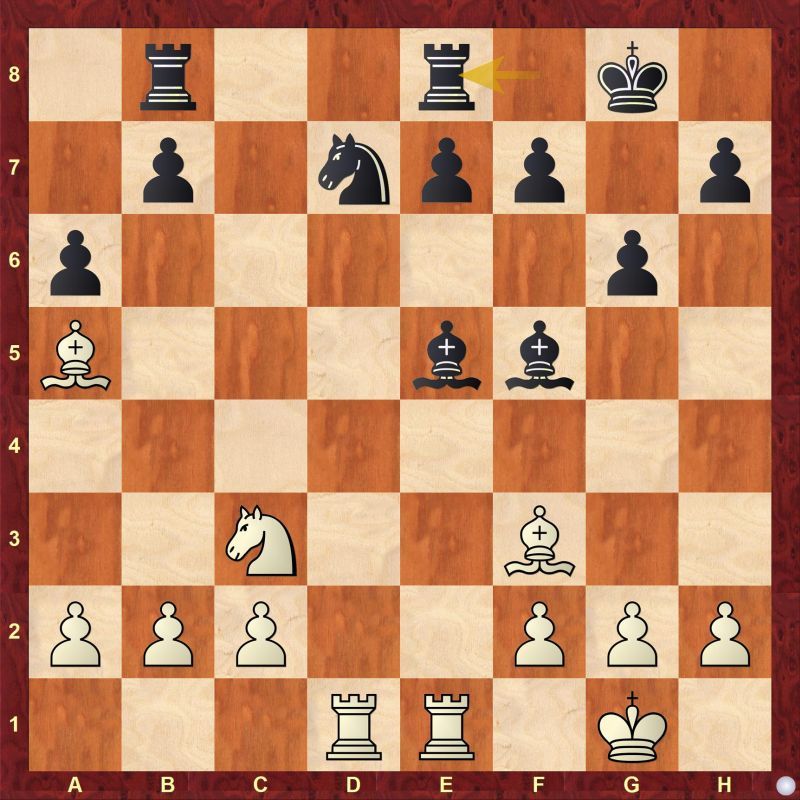 Find out what did white miss after 19...Rfe8

Giri picked up a poisoned pawn and lost harmony in his pieces. 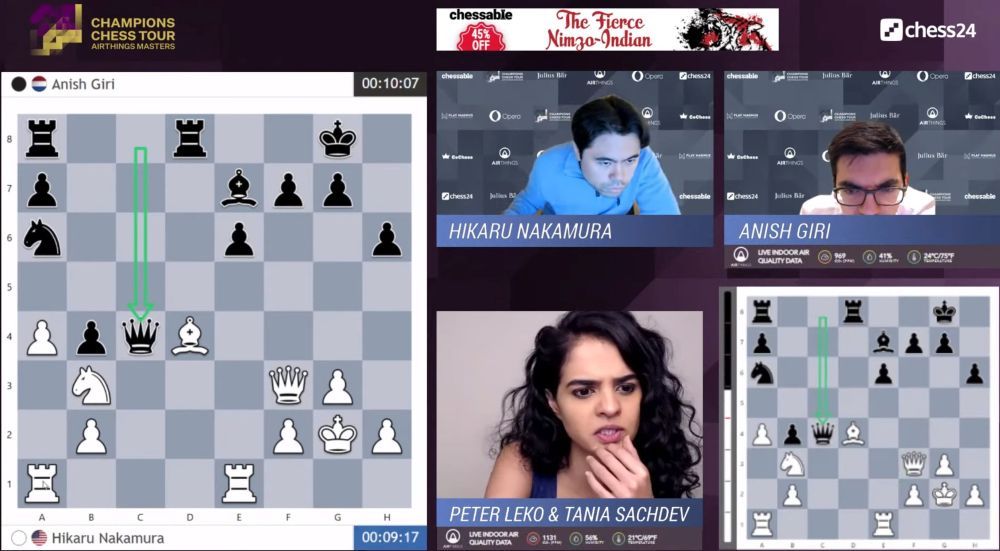 Find out why 20...Qxc4 is a mnistake and what black could have played instead.

Anton picked up a fine victory over Aronian in the final round. Although this win was not enough for the fan-favorite Spaniard and he got eliminated.

Dubov blundered against So in a seemingly equal position and lost the game. 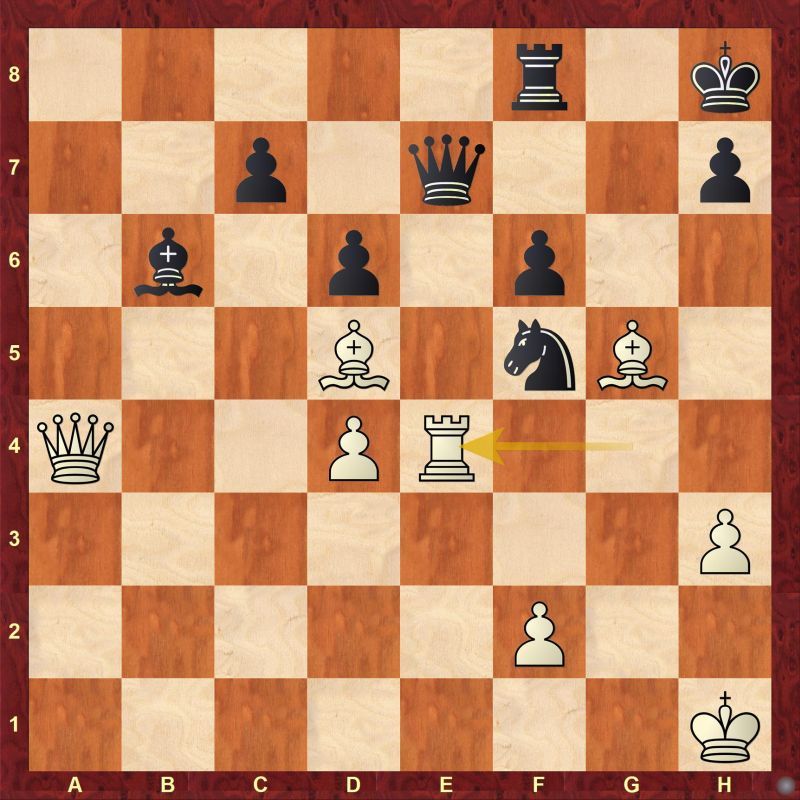 Black queen has only two safe squares and Dubov chose the wrong one. Can you find the correct move for black here?

Harikrishna had an uneventful draw with Radjabov and got eliminated from the tournament. 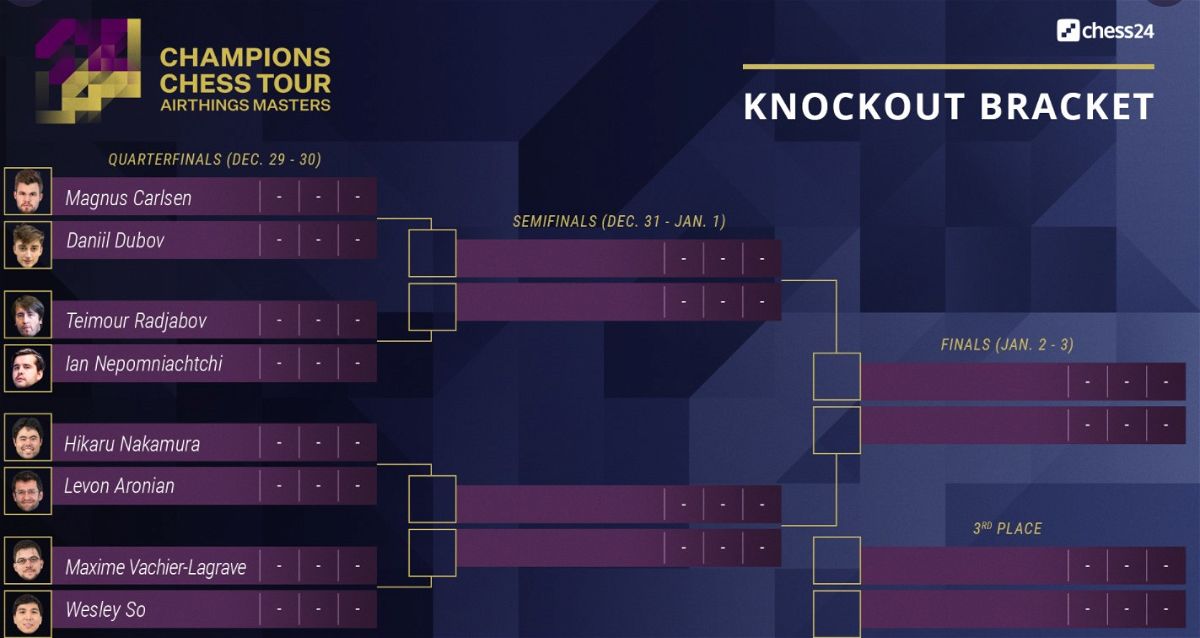 Carlsen-So rematch at the Finals is a possibility | Photo: Champions Chess Tour