Nepomniachtchi and Nakamura have the mammoth task of winning the day 2 of the Semi-final in Champions Chess Tour Skilling Open. They have already done it in the Quarter-Finals and they have to do it again to keep their chances alive to advance to the Finals. Carlsen won the first game but in the next two games, he seemed to be out of his element, so much so that Nepomniachtchi was winning against him in both of those in the endgame. Nakamura needs to play more true to his style, because we witnessed what So can do if you give him leeway to attack and take control. Can Nepomniachtchi and Nakamura bounce back today and force a tie-break? Tune in to ChessBase India youtube channel tonight at 10:30 p.m. IST to watch the live commentary by IM Sagar Shah, Amruta Mokal and IM Soumya Swaminathan. Photo: ChessBase India live stream

Nepomniachtchi lost the first game against Carlsen by opting for a passive move and then blunder his knight. However he got some very good chances to bounce back in both second and third games but he missed converting them to a full point. The fourth game was an uneventful draw. Meanwhile, Nakamura defended well against So in the first game and managed to salvage a draw. In their second game of the day, So punished Nakamura for having no harmony among his pieces and won the game. The third game was a tepid draw and in the fourth one, Nakamura tried hard but unfortunately for him, draw was the maximum he could get.

Nepomniachtchi played a strange passive move in a seemingly equal position and made things difficult for himself. 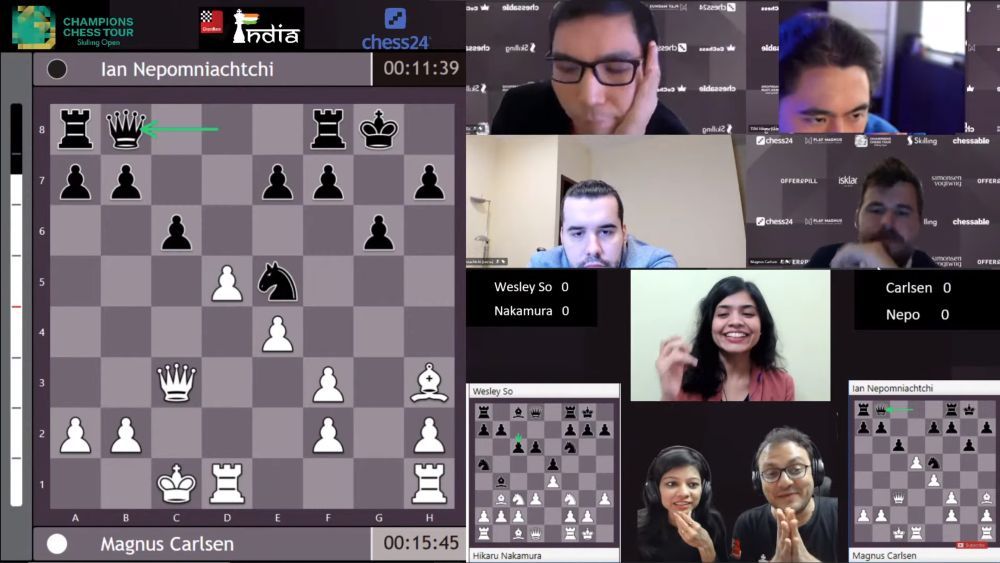 Find out why 15...Qb8 is erroneous and what black could have played instead.

Carlsen made a great escape against Nepomniachtchi and salvaged a draw from a completely lost position. 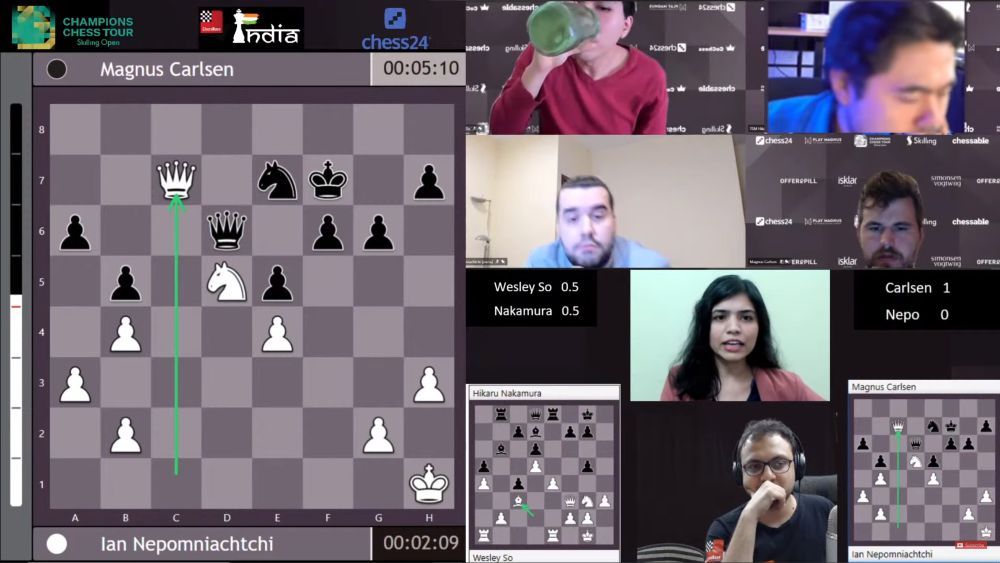 Should black exchange queens after 31.Qc7 ? 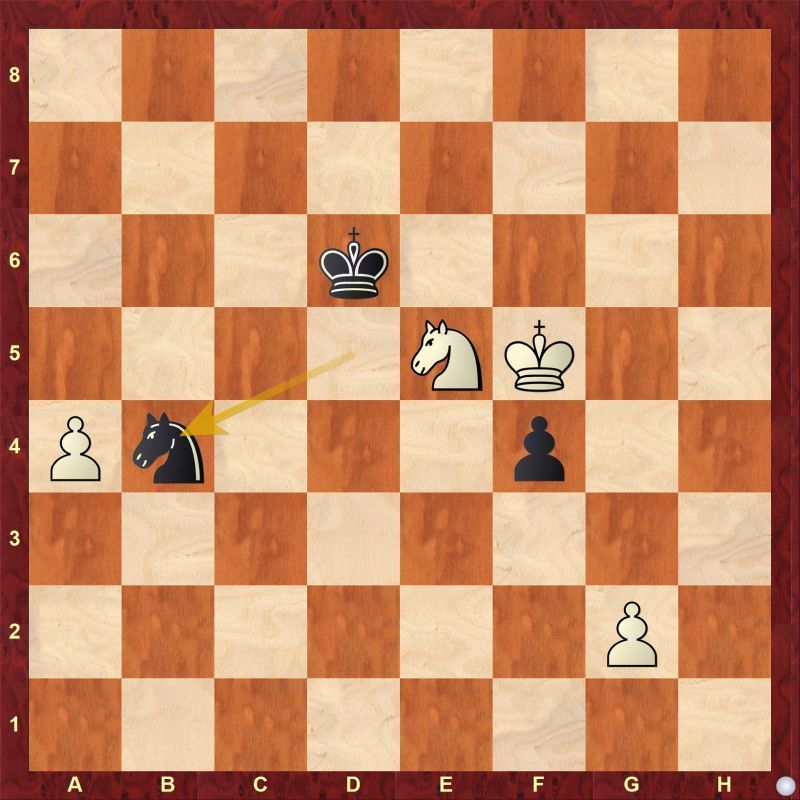 White has a winning position. How should white continue after 49...Nxb4 ? The game continued with 50.Ng6 which allowed black to get back in the game and salvage a draw.

In the third game also, Nepomniachtchi once again found himself having a fantastic position against the world champion. 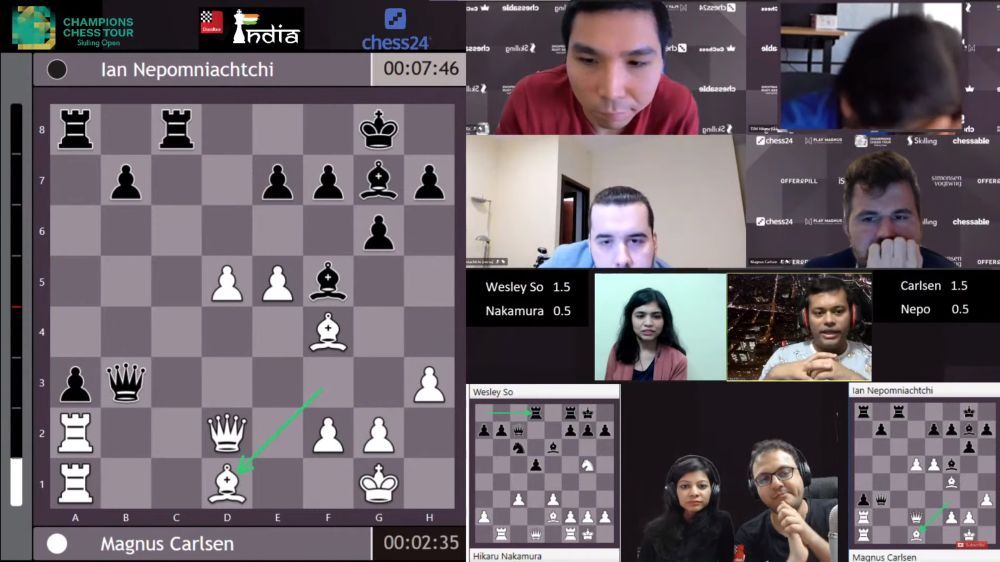 It is evident that black is the one who is in firm control and white is reeling after 28.Bd1. 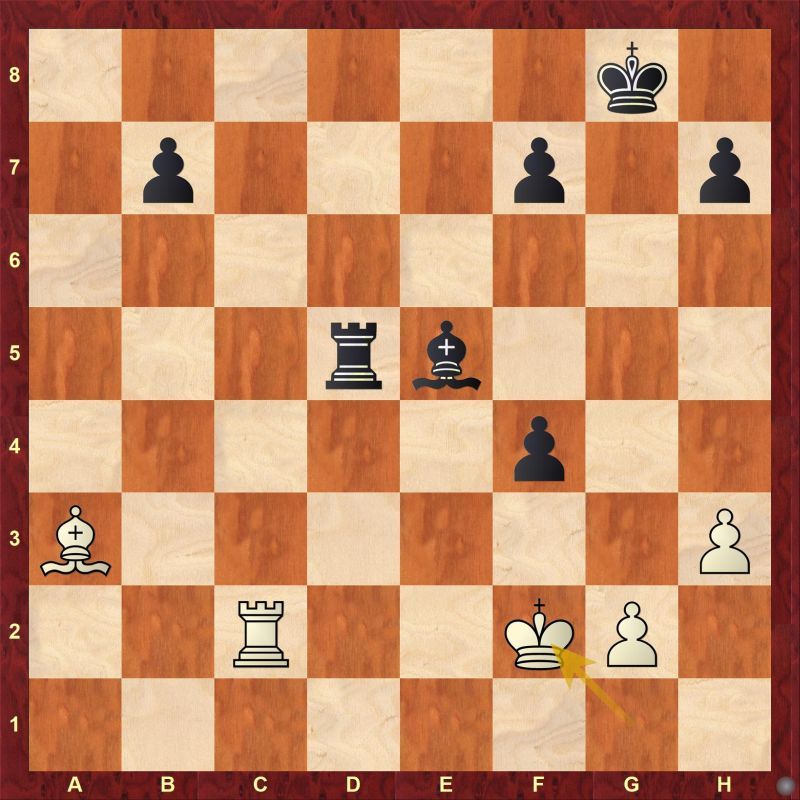 Once again Nepomniachtchi got a winning position in the endgame and he squandered it. Find out what is the one thing black should not do here. 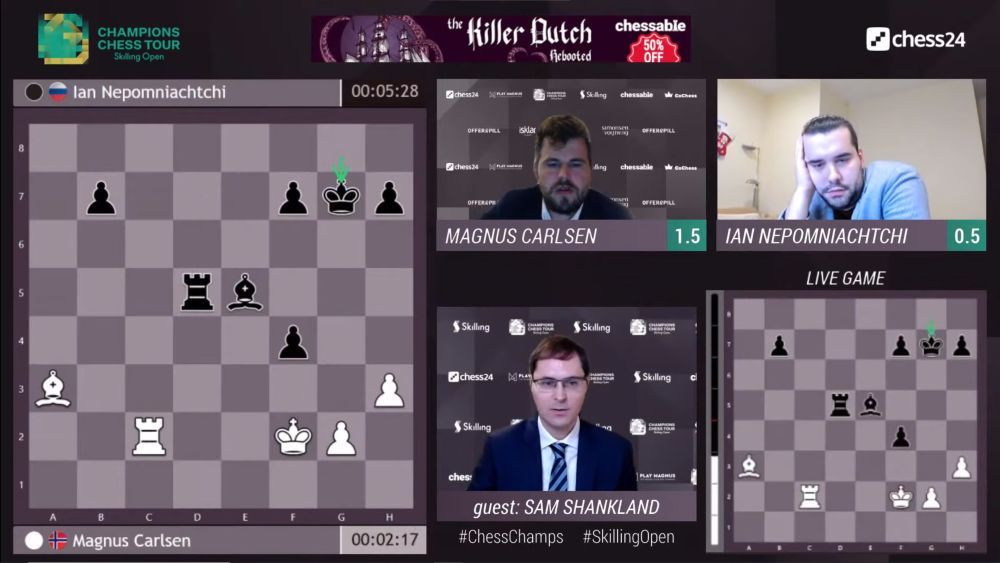 Nepomniachtchi did what he probably shouldn't have with 38...Kg7 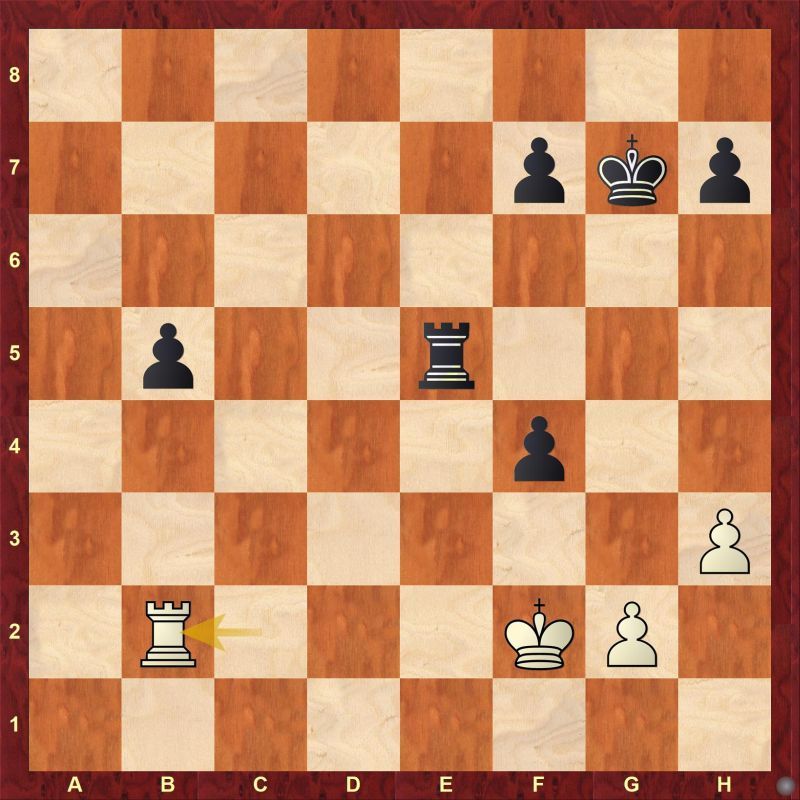 Endgame virtuoso Carlsen also misplaced his rook with 41.Rb2. We all know that generally, rook is best placed behind the pawn be it for an attacker or the defender. But Caissa was not on Nepomniachtchi's side and he struggled heavily before making a prolonged draw.

The fourth and final game of the day between Carlsen and Nepomniachtchi was an uneventful draw.

The first game was an interesting draw. At one point it felt So is playing like Nakamura against Nakamura. 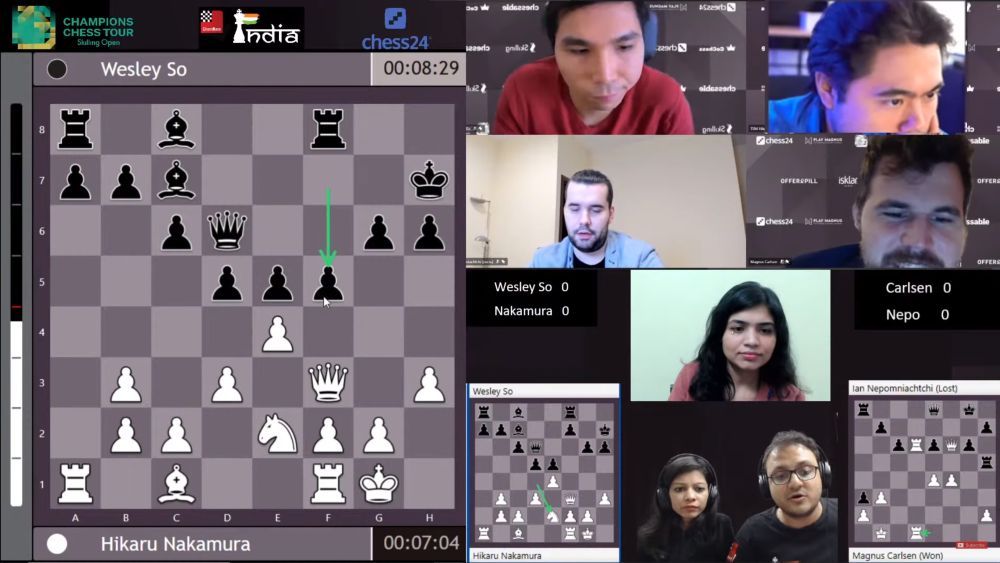 The position definitely looks difficult to play for white after 18...f5. Nakamura being a staunch defender, managed to survive just fine and salvage a draw.

So got a huge positional advantage against Nakamura in the second game and he just slowly built on it. 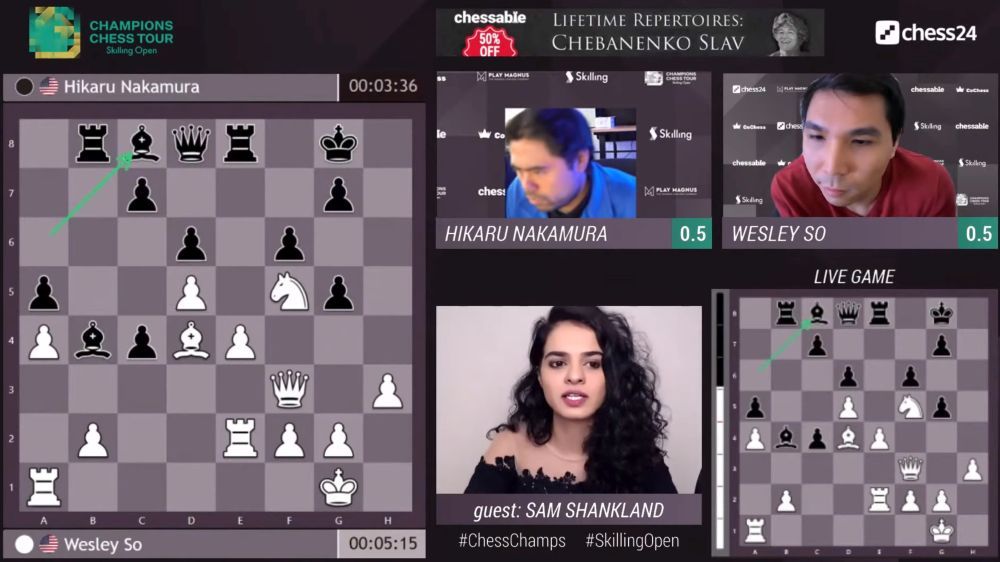 White is in complete control of the position after 30...Bc8. What should be the correct plan for white here? 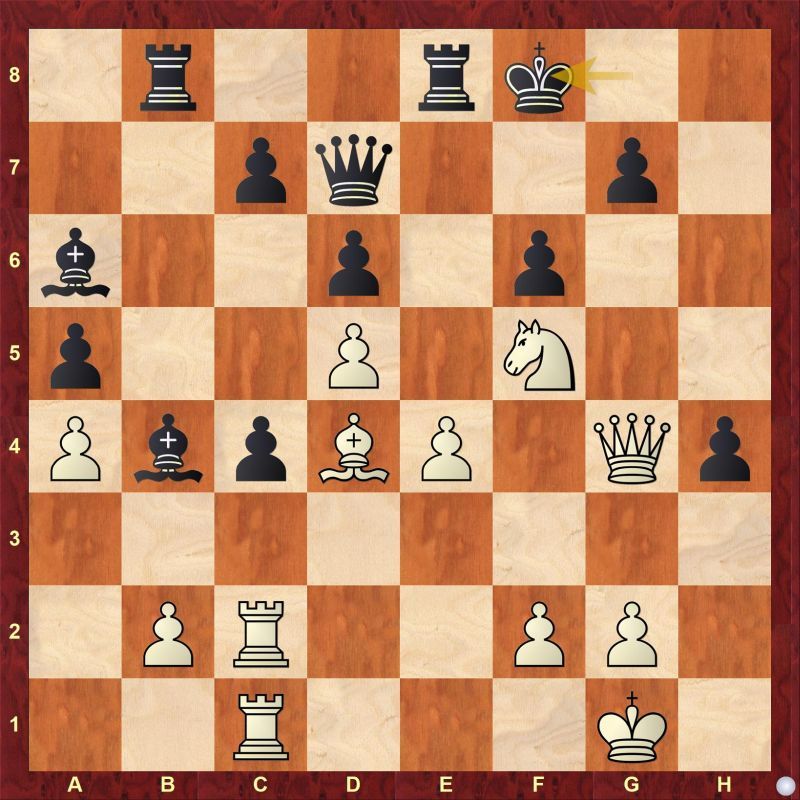 Black's position is crumbling and it's time for white to strike. How?

The third game between Nakamura and So was a tepid draw. In the final game of the day, Nakamura tried hard to get an initiative but he couldn't get any. 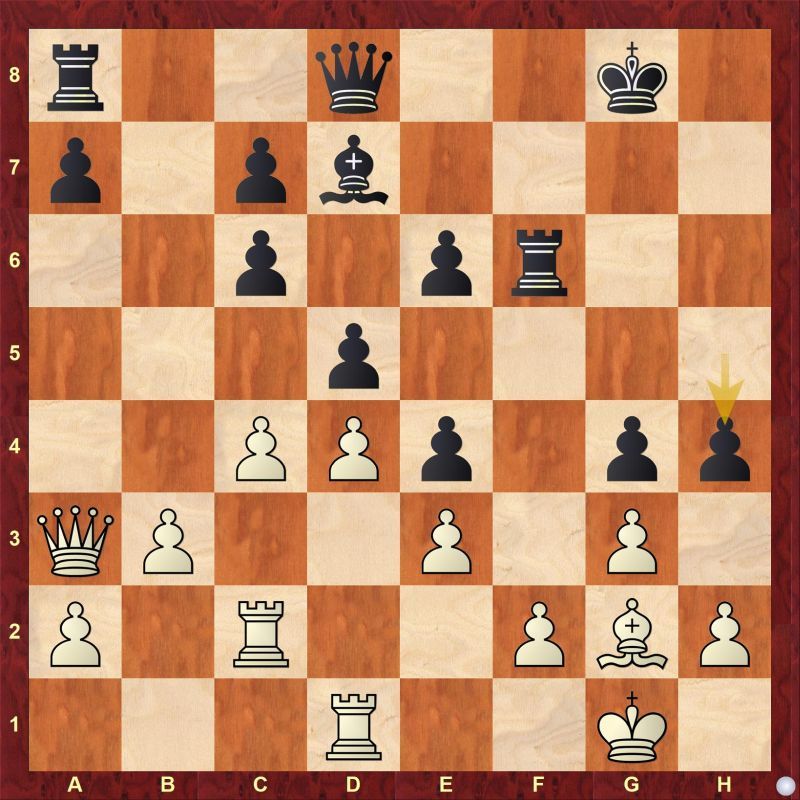 Black sufficient material or the existing pieces ready to create any king of damage on white's kingside. The game eventually petered into a draw in another 20 moves.

Replay all Semi-Final games from Day 1

Nepomniachtchi and Nakamura once again are in a must-win situation | Photo: chess24