Five players share the lead at the end of day 1 of Champions Chess Tour Airthings Masters. Nakamura, Aronian, Dubov, Radjabov and So are in the lead with 2.5/4 each respectively. Harikrishna held Carlsen to a draw after they repeated moves in the fourth round. Both of them drew all their games on the first day. Only seven decisive games were played out of 24, so the winning percentage on day 1 is a staggering 29.17%. Daniil Dubov played a fantastic game against David Anton Guijarro to score a win and be in the shared lead. Round 5 continues tonight Sunday 27th December from 7:30 p.m. IST. Watch the live stream on ChessBase India youtube channel with IM Sagar Shah, Amruta Mokal and IM Soumya Swaminathan. Photo: chess24 Live stream

Both Harikrishna and Carlsen started the first day of Airthings Masters with four draws. Five players are in the lead with 2.5/4 and they are Nakamura, Aronian, Dubov, Radjabov and So. Grischuk and Nepominachtchi are at 2.0/4 along with Carlsen and Harikrishna. Only seven decisive games were played out of 24 on day 1. Giri and Anton suffered two losses each. The most interesting game of the day was between Dubov and Anton in the fourth round. 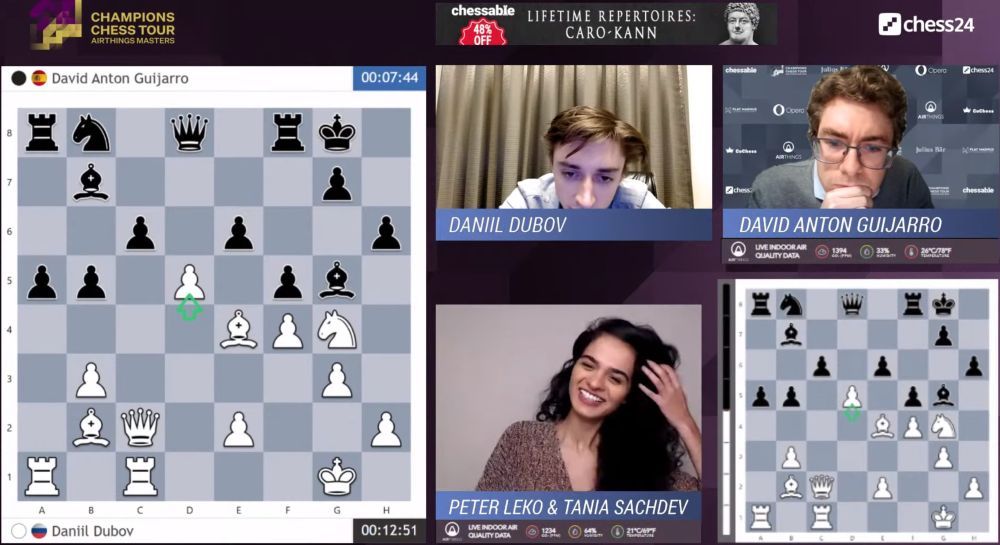 Round 1: Nakamura scores the sole win

Harikrishna made a comfortable against Vachier-Lagrave in the first round.

Dubov is one of the most creative players among the top players who doesn't shy away from taking chances. In the first round against Radjabov, even in an equal position, he tried to stir up trouble for his opponent on the board. 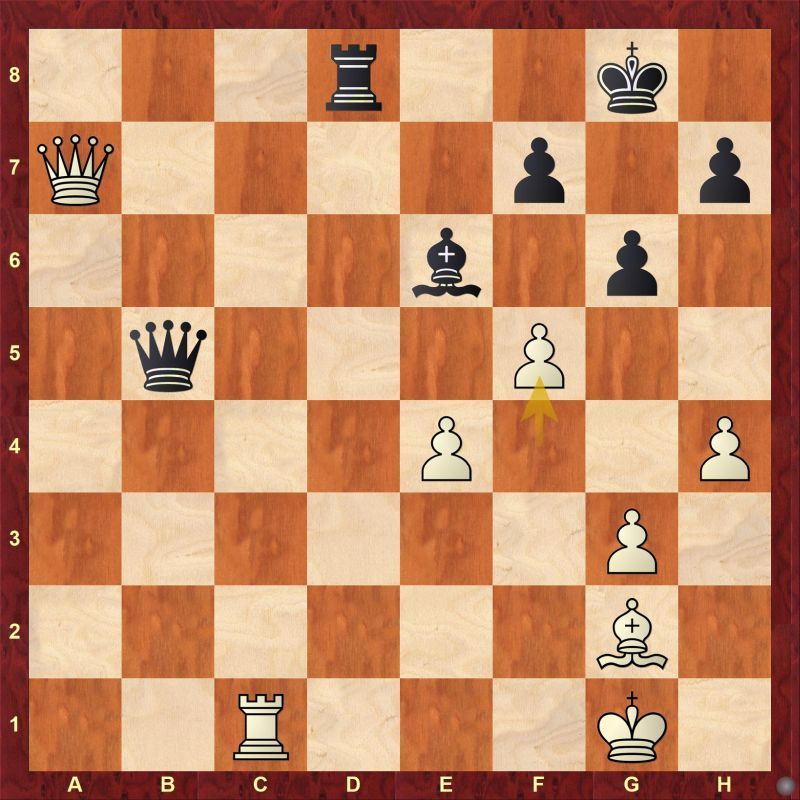 28.f5 is not as venomous as white would like it to be. However the hint of a threat and time scramble make it the perfect choice for white.

David Anton Guijjaro had an interesting opening round battle against the Tour leader and Skilling Open winner Wesley So. 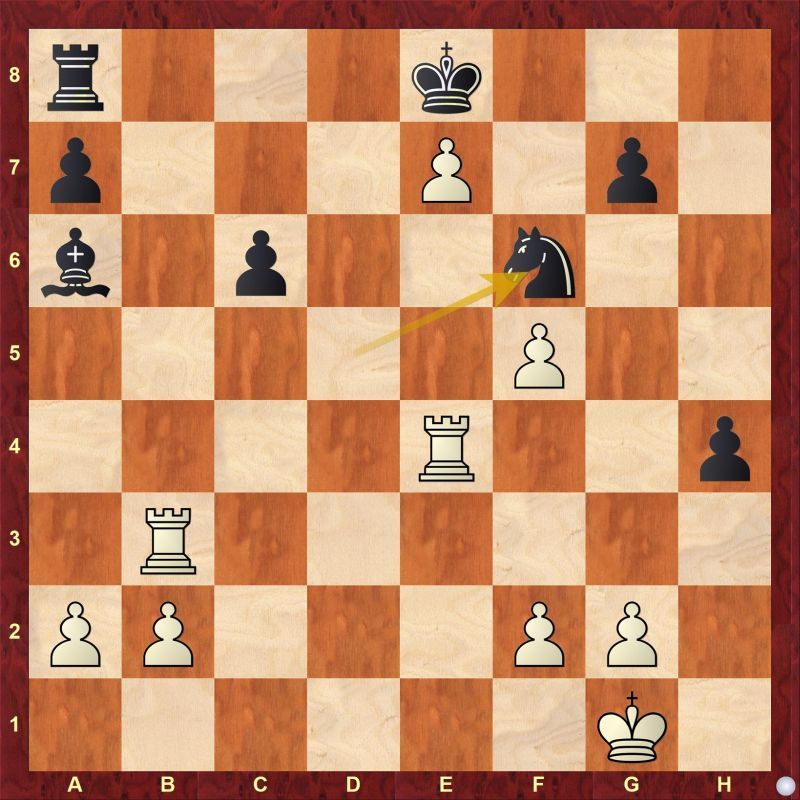 The game went on with 31.Re1 which is quite natural as you would definitely want to keep your e7-pawn alive for as long as possible. Even Leko in his live analysis mentioned that it might be difficult for white to hold on e7 and f5. It aligns with computer's thought of wanting to go with either 31.Ra4 or Rxh4 immediately. 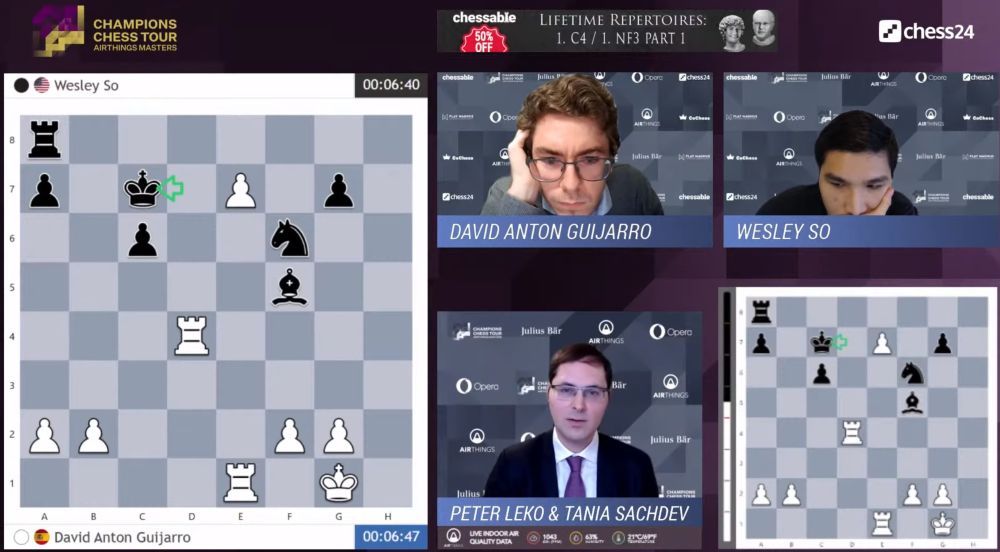 The game went on with 35.g4 which definitely looks promising but there was something else white could have tried. What was it?

Carlsen-Aronian game was quite an interesting one. Aronian's king's journey to the center of the board made things intriguing. 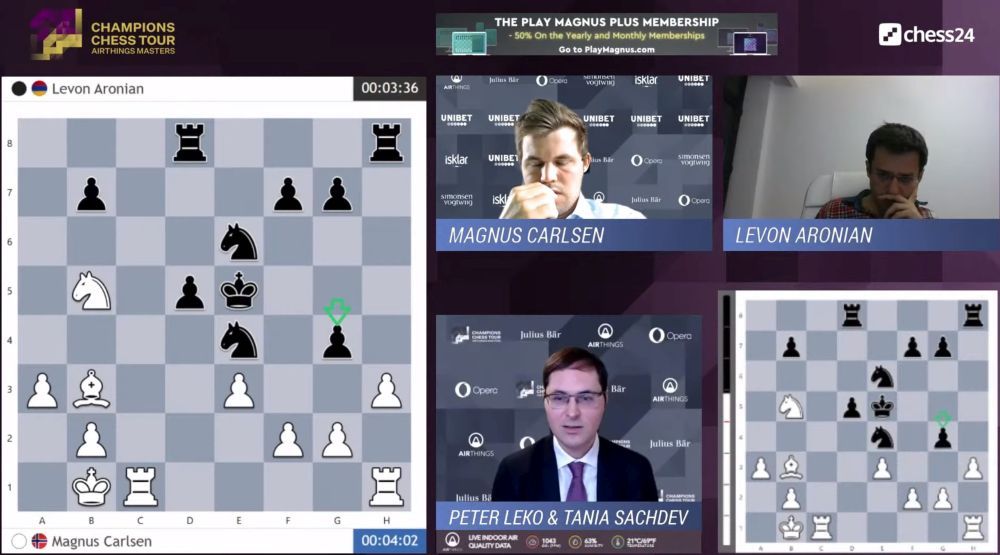 Black's intention with 25...g4 is obviously to destroy white' pawn structure on the kingside. Should white take it? 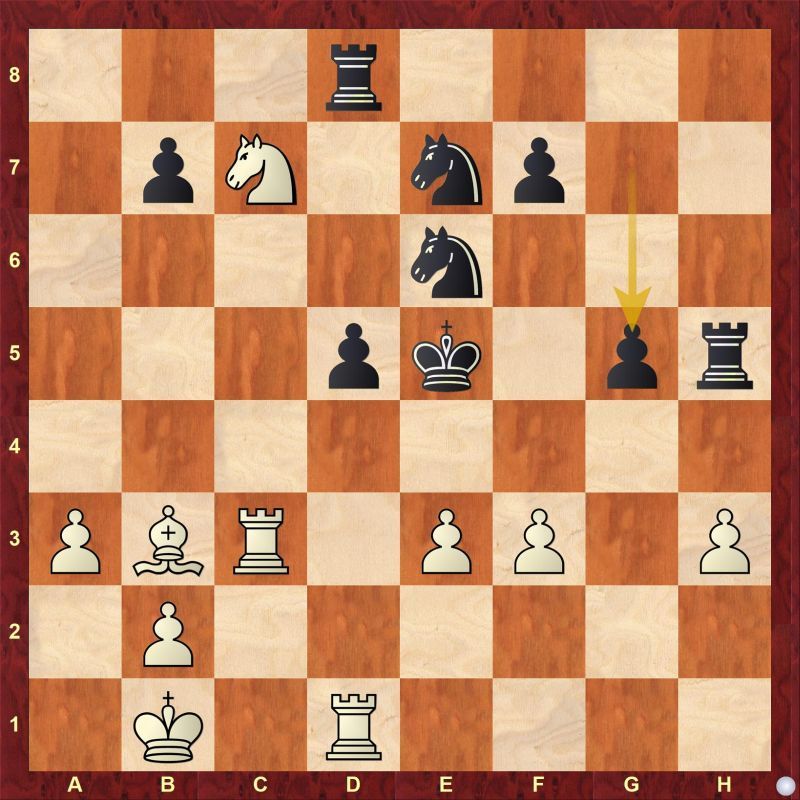 White has another good opportunity after 31...g5. Find out what white should have done here. 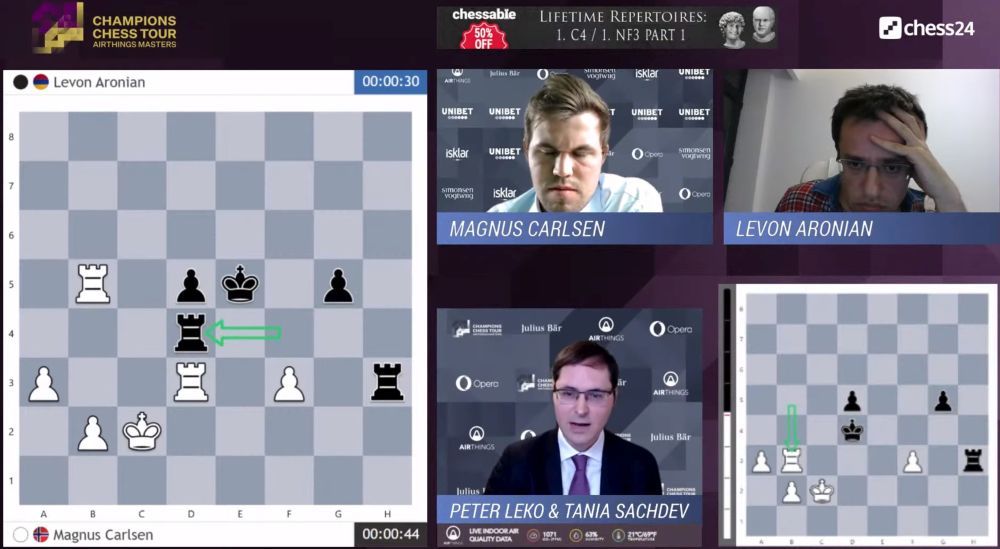 Aronian's biggest mistake in the game was 42...Rd4 but much to Carlsen's chagrin, he completely missed it and played 43.Rxd4 and the game ended up in a draw in another 18 moves. What did white miss here?

Giri was ahead by a pawn and he had a good position against the newly crowned Russian champion Nepomniachtchi. 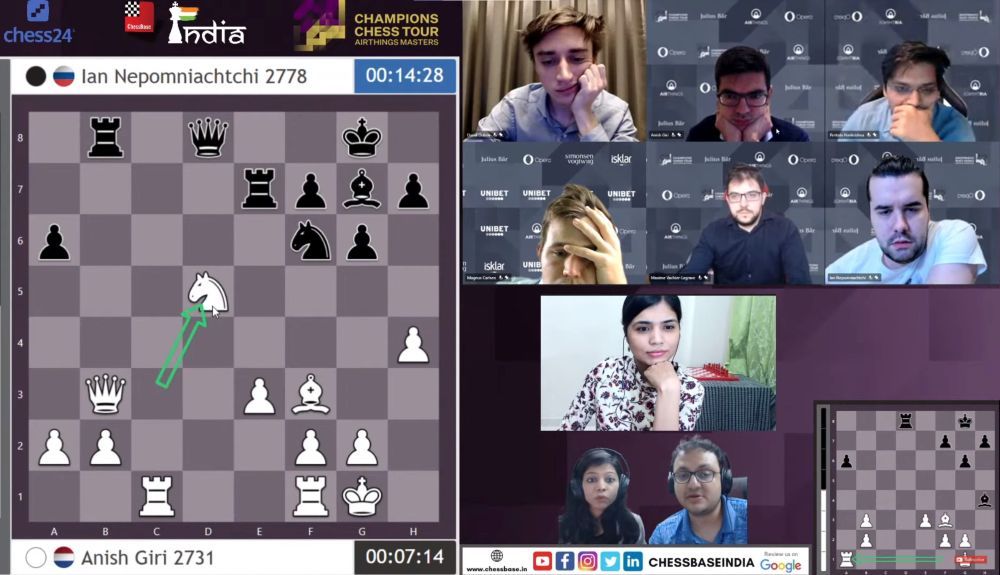 White went for a tactics with 18.Nxd5 which helped black to alleviate the pressure. Find out what white could have done instead.

Grischuk overstretched his pawns on the kingside against Nakamura resulting in relentless attack by the Speed King Nakamura. 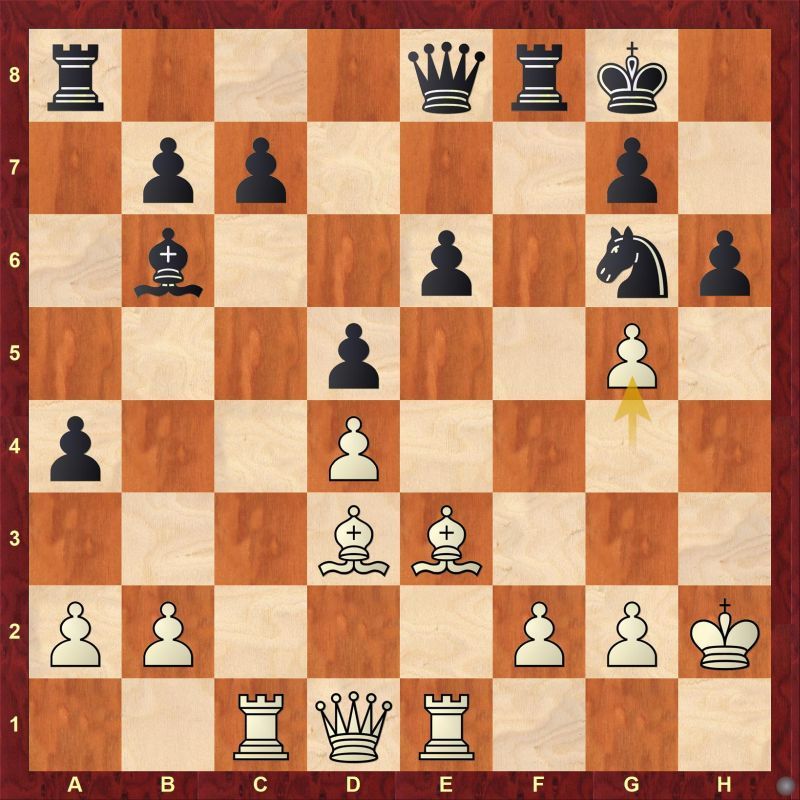 24.g5 as tempting as it may look is not the best idea for white. White should have simply retreated his bishop to c2 to prevent Nf4. 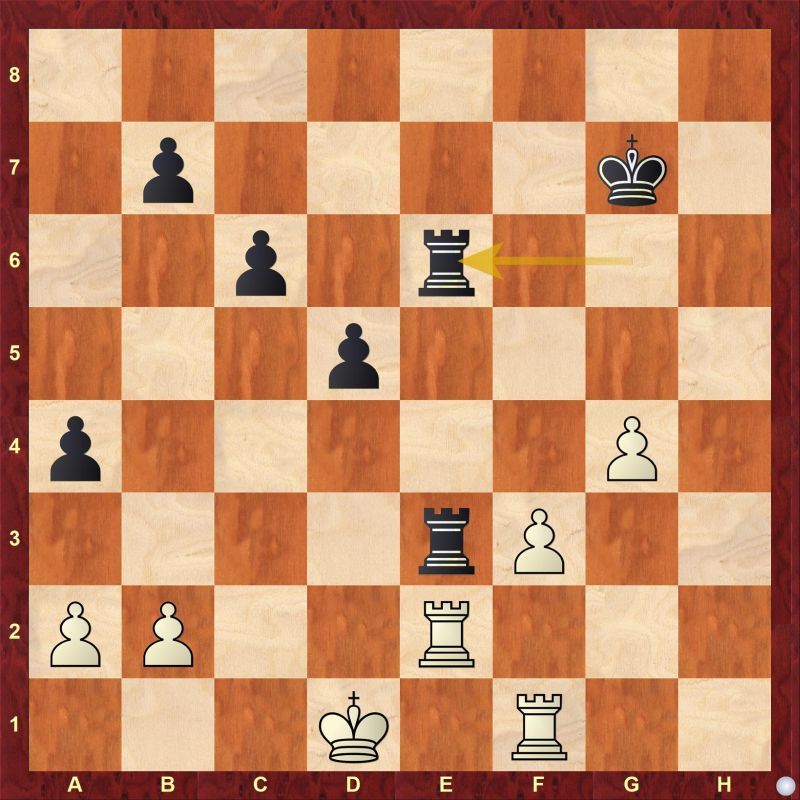 Should white exchange the rooks here or not? The game went on with 41.Rfe1 which was certainly not the best move. Both players made a lot of inaccuracies in the resultant rook endgame but ultimately Grischuk lost the game, although he had plenty of opportunities to salvage a draw.

Round 2: Grischuk, Aronian and Radjabov win

Vachier-Lagrave had a well fought draw against Nakamura as all attempts by the Frenchman were thwarted by the American.

Grischuk bounced back strong after suffering a loss in the first round as he made the most out of his opportunity against his compatriot Nepomniachtchi. 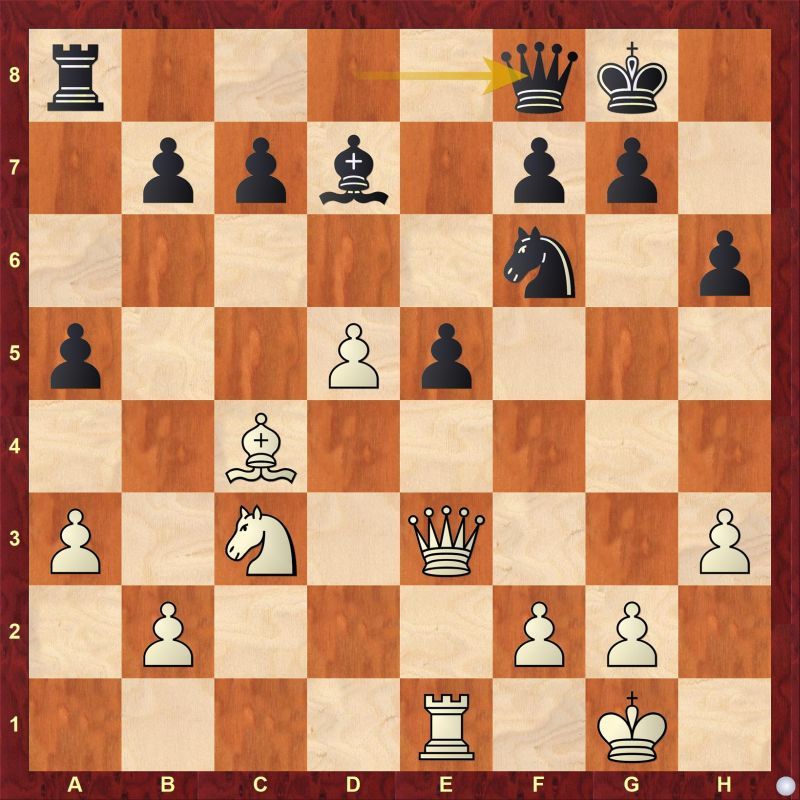 22...Qf8 is the most profound move of the game as black activated the queen and wreaked havoc allowing him to score the victory.

Aronian and Giri had a fantastic battle where Giri did not provide the best resistance, allowing the Armenian to score a victory. 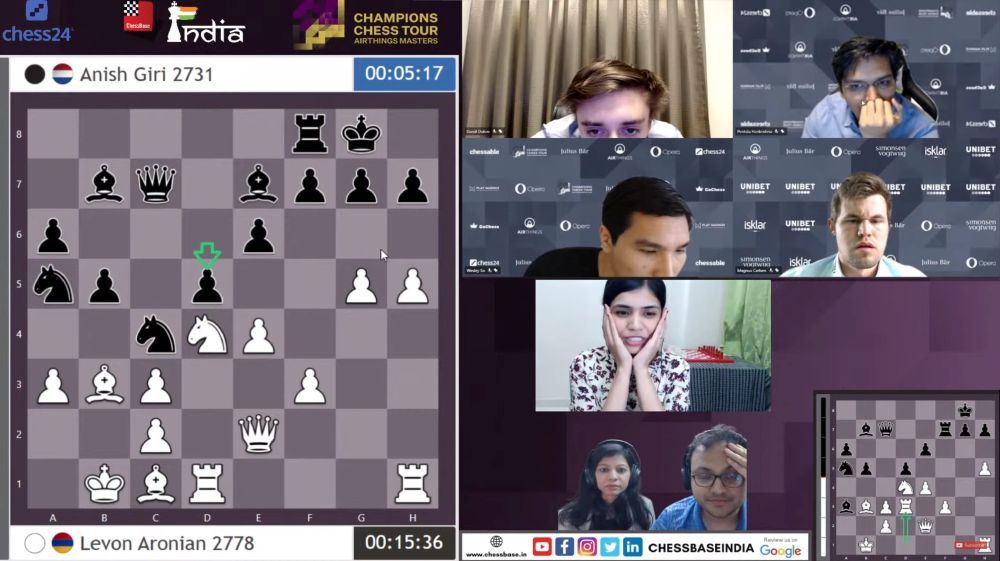 How should white continue the attack after 19...d5 ?

Battle of the world champions between So and Carlsen turned out to be an uneventful draw.

Every time when it seemed Anton is about to get into big trouble against Radjabov, he managed to save his position. In the end he made a blunder which seemed like a position he could have saved. 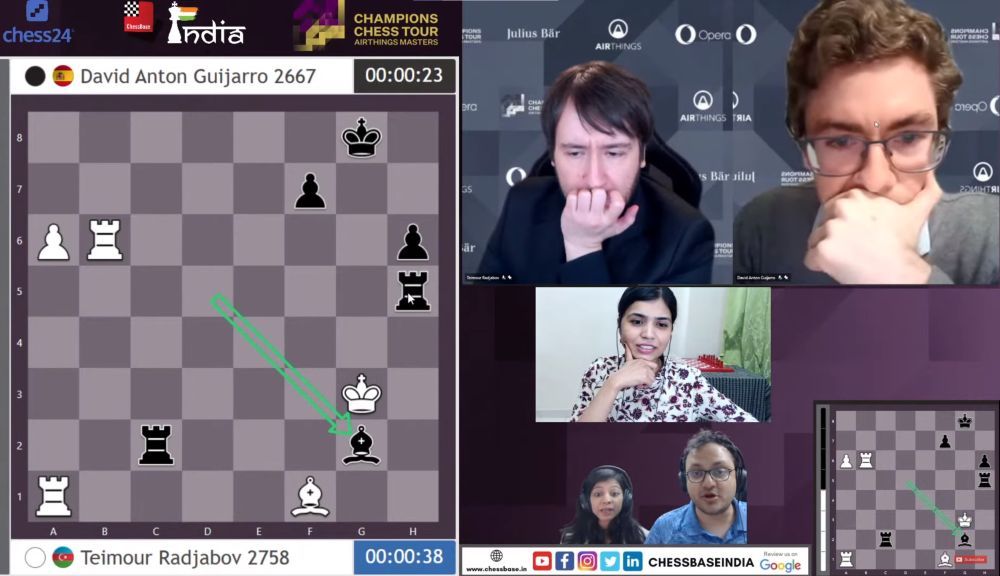 Black made an unforced error 41...Bxg2 which completely turned things into Radjabov's favor. Find out how black could have saved the game instead.

Harikrishna made a solid draw against the former World Rapid champion Dubov.

Round 3: So scores the sole victory

Dubov had a better position for the better part of the game against Vachier-Lagrave. However he maneuvered his knight to the wrong part of the board. 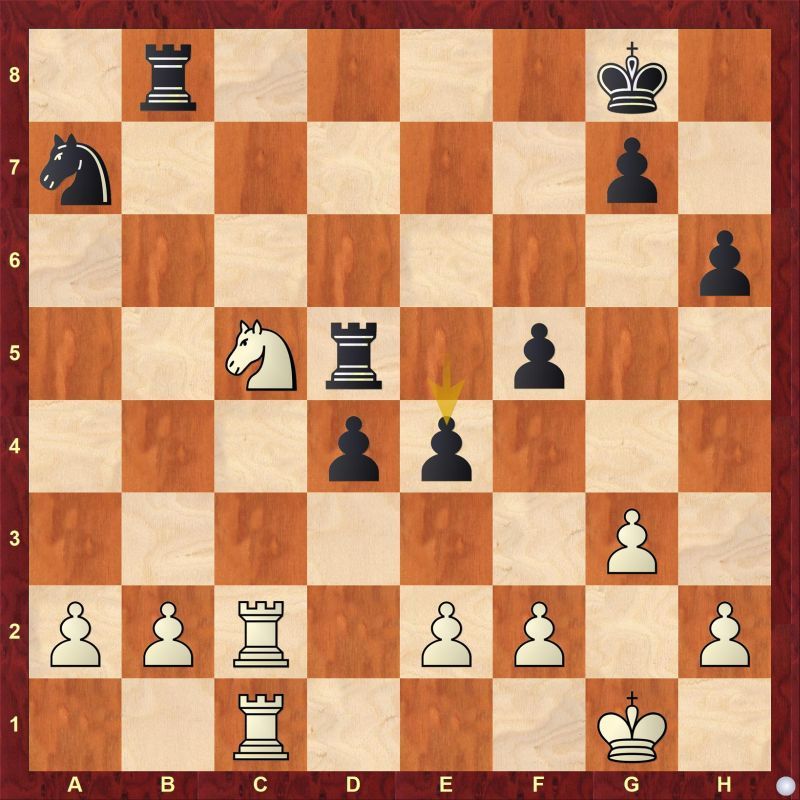 The game went on with 31.Ne6 and white ventured his knight to the kingside which was not the best idea. What should have white done here? 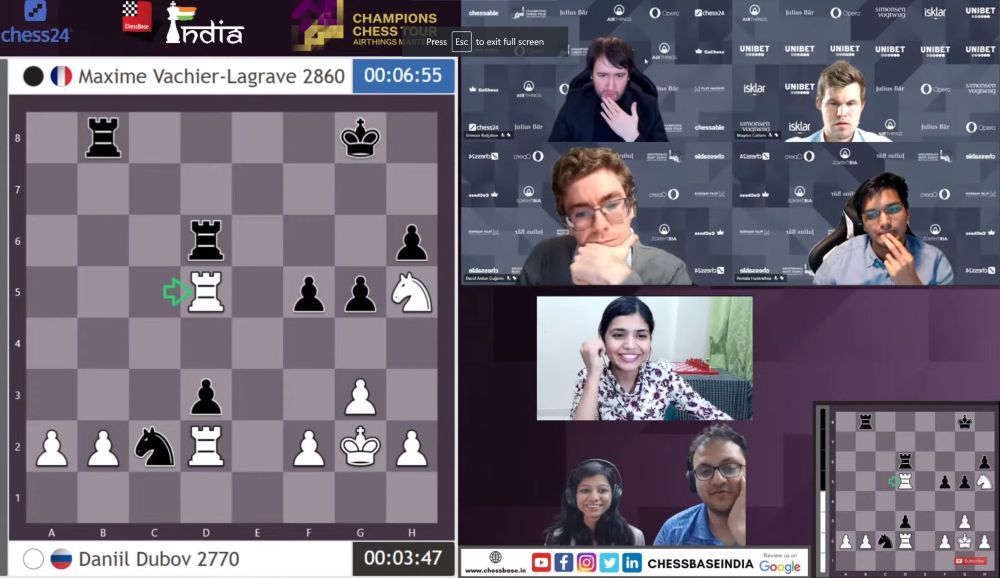 White blundered in the game with 38.Rd5. Find out why it's a mistake. Vachier-Lagrave was unable to capitalize on it and Dubov salvaged a draw.

Harikrishna had an uneventful draw with Anton.

Carlsen made his third consecutive draw of the day, this time against Radjabov.

In an already difficult position, Giri allowed So attack freely. 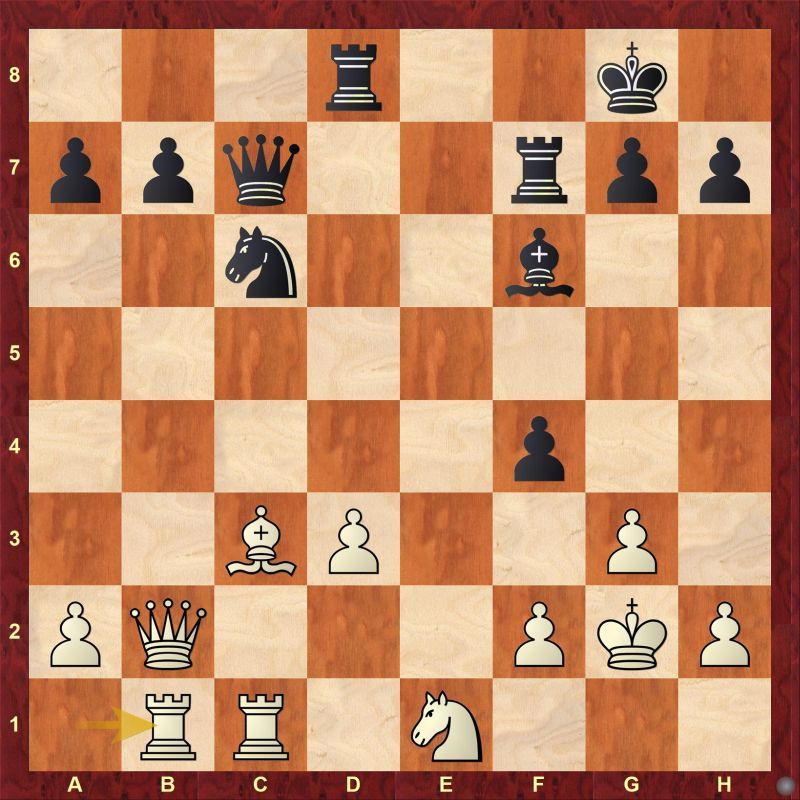 Find out why 22.Rab1 is a mistake and what white should have played instead.

Grischuk and Aronian had an 18-move short draw. Nakamura had a couple of chances to gain decent advantage against Nepomniachtchi but he missed them. 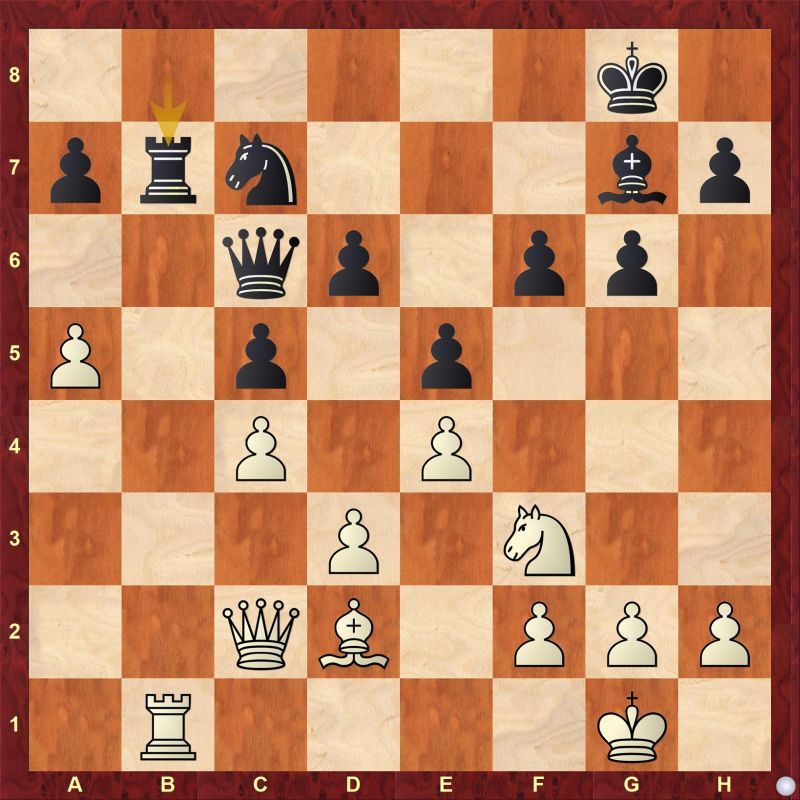 22.Rxb7 Qxb7 23.Qa4 allows white an opportunity to gain an entry and stir up some trouble for black.

Round 4: Dubov's brilliant win against Anton

Vachier-Lagrave had his fair share of chance against Nepomniachtchi in the final game of the day. 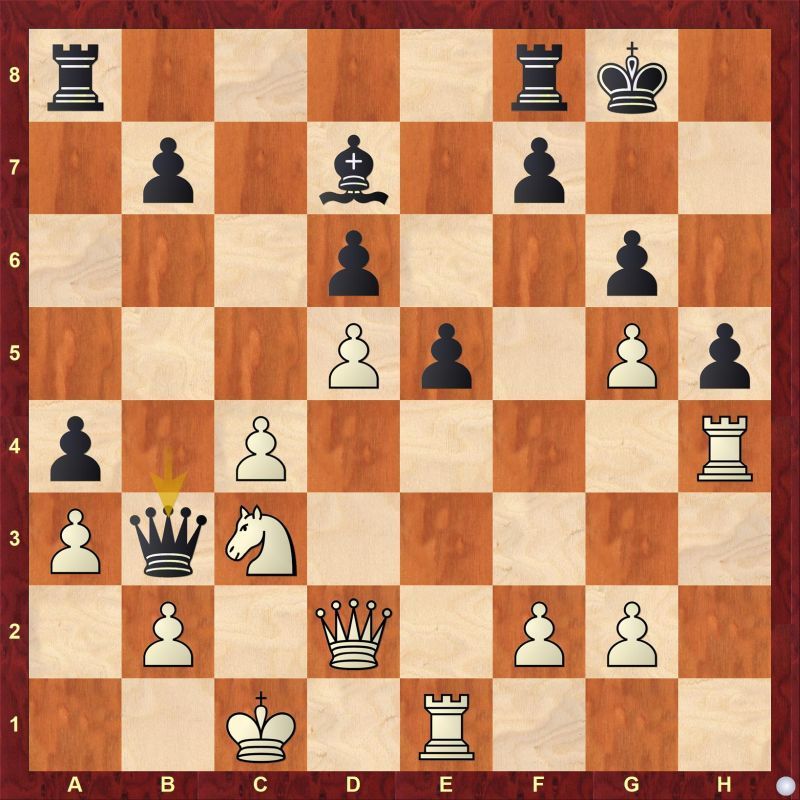 Find out the best continuation for white after 23...Qxb3 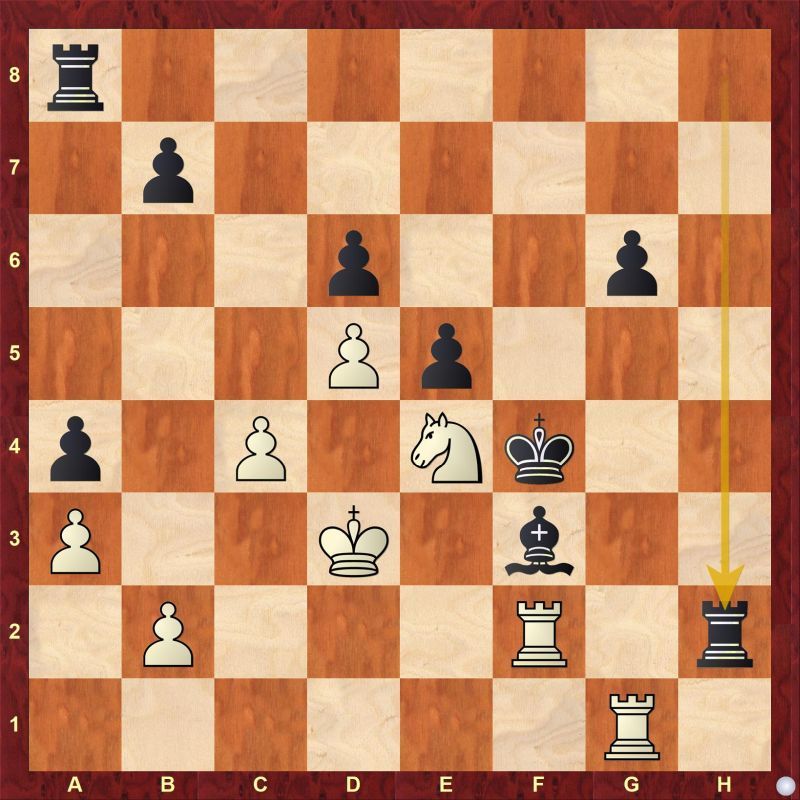 Is it a good idea for white to take the rook?

Aronian-Nakamura, So-Grischuk and Radjabov-Giri had uneventful draws respectively. Harikrishna had a 24-move short draw with Carlsen. 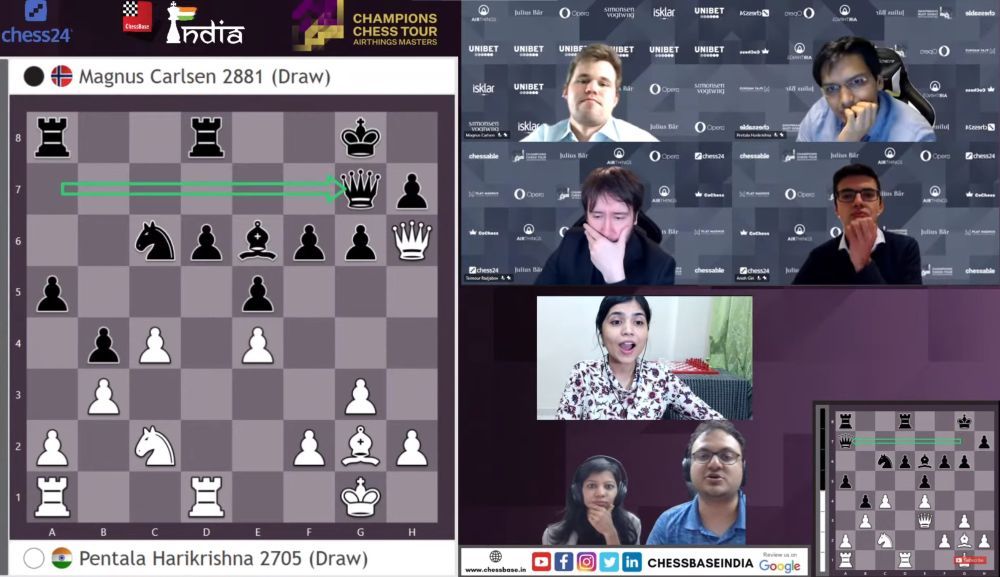 Once again Dubov strikes with his brilliant play. This time the victim was Anton.

Leko exclaims in the live analysis that d4-d5 in this position is a thematic idea. 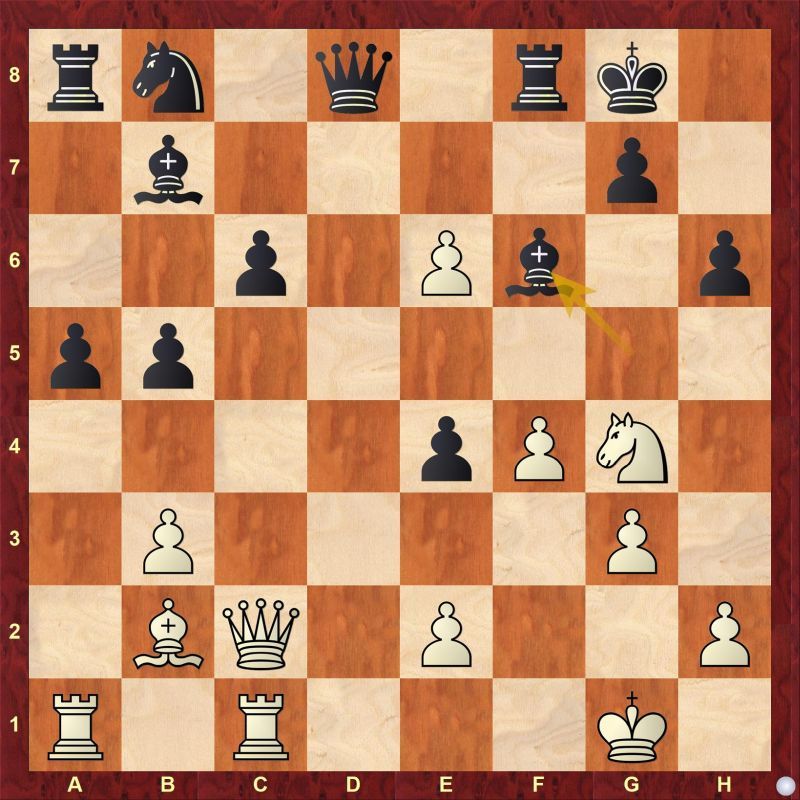 Black went wrong with 19...Bf6 as after 20.Bxf6 black was forced to give up an exchange to avoid getting his kingside destroyed. Instead 19...h5 would have been a better continuation for black. 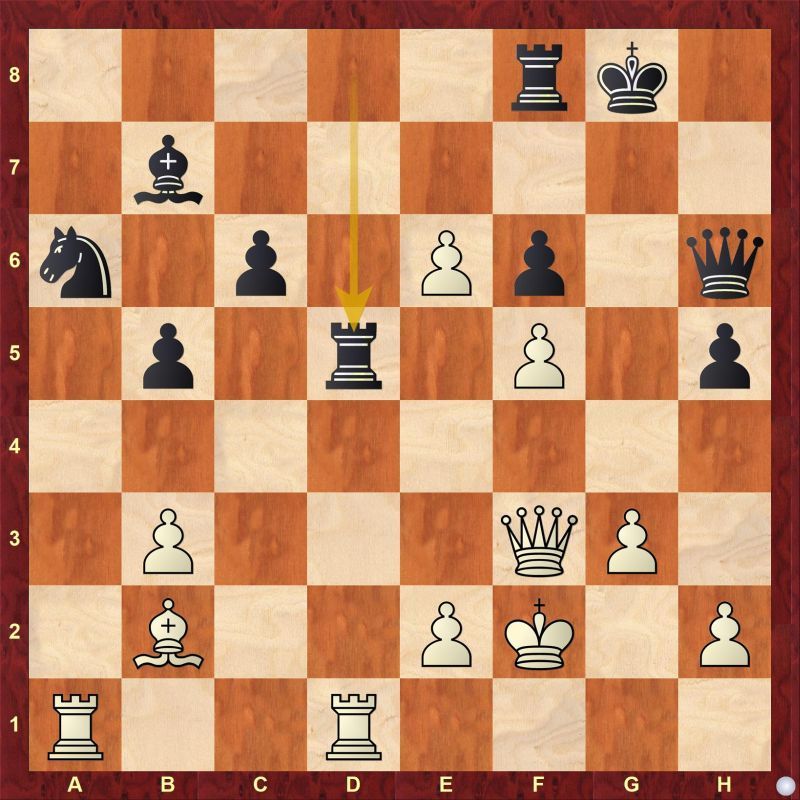 Find out why 27...Rd5 was a mistake. Rest was just a matter of technique and the former World Rapid champion won it convincingly.

Of course after another fantastic game like that, you would like to hear from the man himself. Check out this exclusive interview:

How does Daniil Dubov do it? Dubov vs Anton | Video: ChessBase India

Replay all Round 1-4 games from Day 1

Five players are in the lead with 2.5/4 | Photo: Champions Chess Tour