Meltwater Champions Chess Tour New in Chess Classic Day 3 witnessed Praggnanandhaa once again have another fantastic day. He started with a loss but then he beat Christiansen and drew with Carlsen, Nakamura and Firouzja. The world champion praised Pragg for his play. He might not have advanced to the next stage but he certainly showed that he can hold his own with the top players of the world. Vidit also finished with the same score as Pragg 7.0/15 and got eliminated from the event. Carlsen-Radjabov, Aronian-So, Mamedyarov-Firouzja and Liem-Nakamura are set to clash in the Quarter-Finals which starts tonight from 10:30 p.m. IST. Watch all the action with live commentary by IM Sagar Shah and Amruta Mokal on ChessBase India youtube channel. Photo: Champions Chess Tour

Vidit and Praggnanandhaa get eliminated

Praggnanandhaa scored 7.0/15 in the Prelims of New in Chess Classic but he was thoroughly impressive with his performance especially when the world champion Magnus Carlsen had this to say about him, "Pragg is very, very strong. He is not out of sorts here, in this field at all. At least my impression is that he is already very, very strong." He also added, "I think we can enjoy the fact that he is playing so well at this age and I would say so, fearlessly. He certainly did not show me too much respect when we were playing. So he clearly believes that he can compete at this level and I think at this point that's sort of enough. Let's not talk about world championships so much for him and just let him do about." 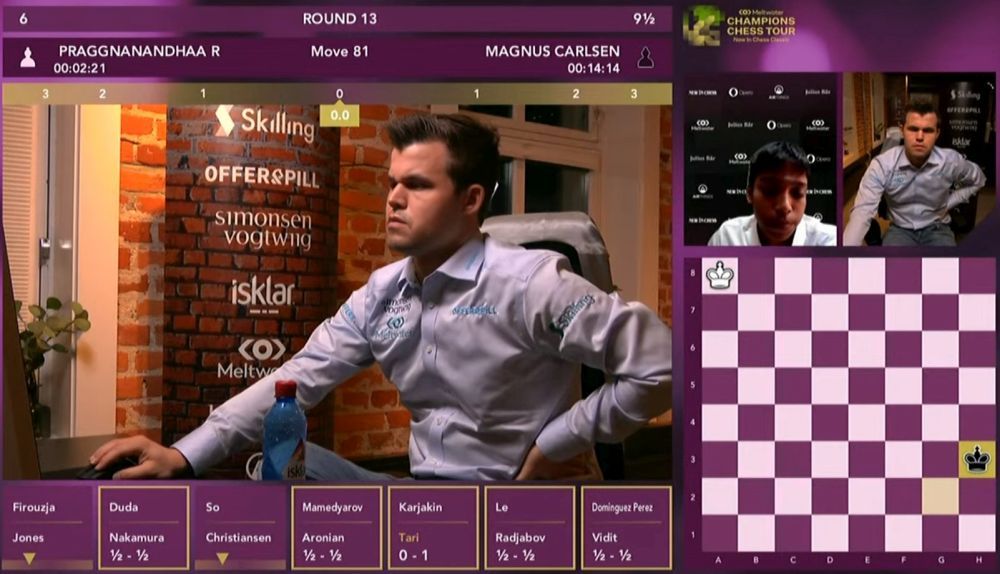 Round 11: Pragg and Vidit suffer

Praggnanandhaa in a relatively equal position blundered in the time trouble against Aronian. 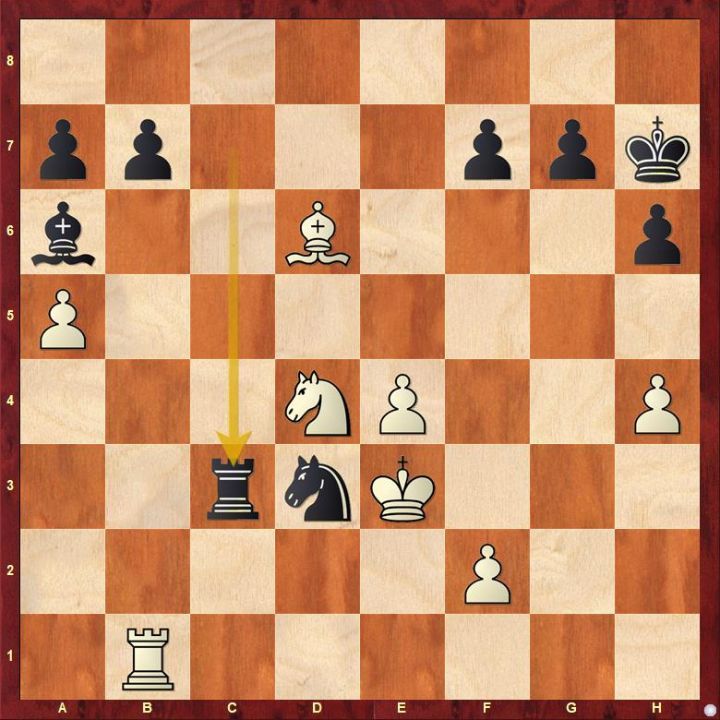 The game continued with 40.Kd2 which is a mistake. Instead white needed to play 40.Nb4 here to stay alive.

Vidit had a drawish position in the endgame but a slight inaccuracy cost him the game against Karjakin. 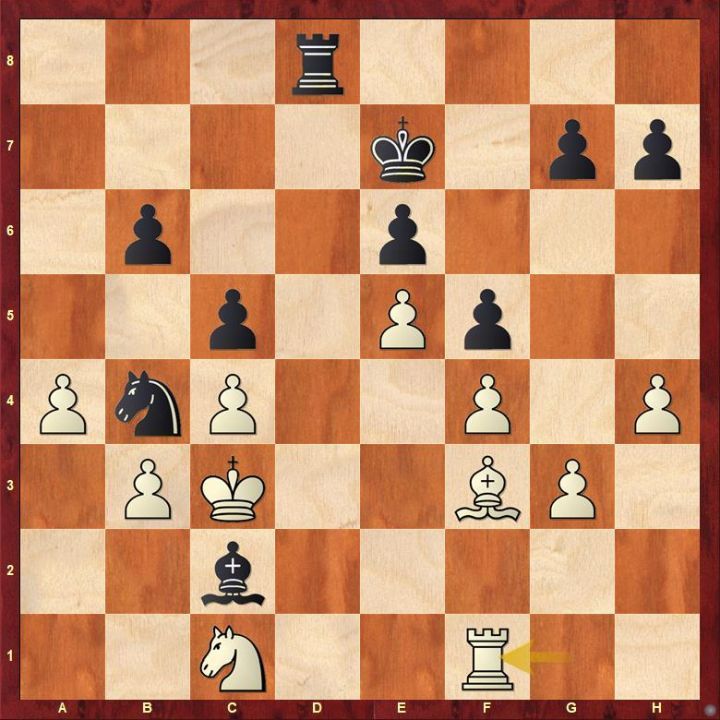 White has a plan which he missed for the last couple of moves but finally he is going to execute it. What should black do after 34.Rf1 to make sure white does not get the upper hand?

Vidit suffered another loss, this time against Le Quang Liem. He had good chance in the endgame but he missed it. 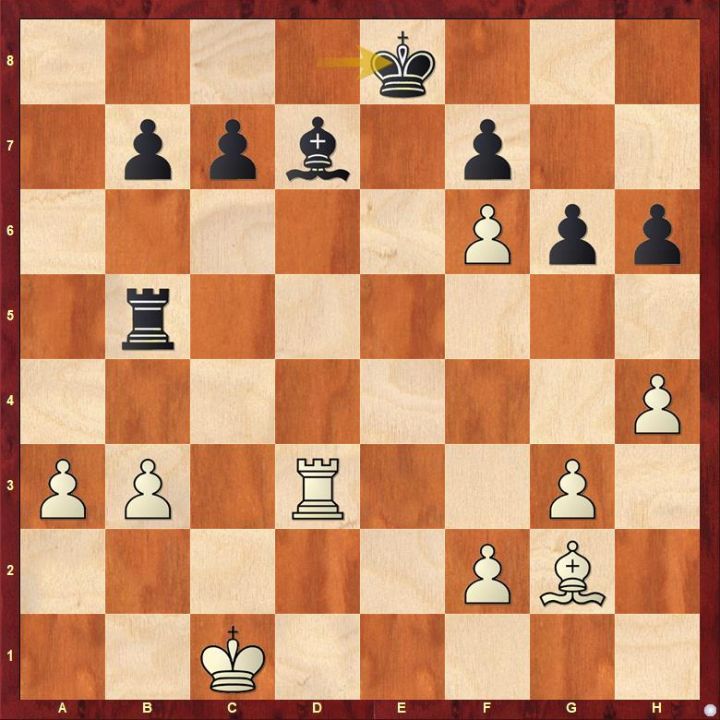 White could have played either 32.f4 or Re3+ to maintain the advantage but 32.Bd5 dwindled it as black forced the bishop exchange with 32...Be6. 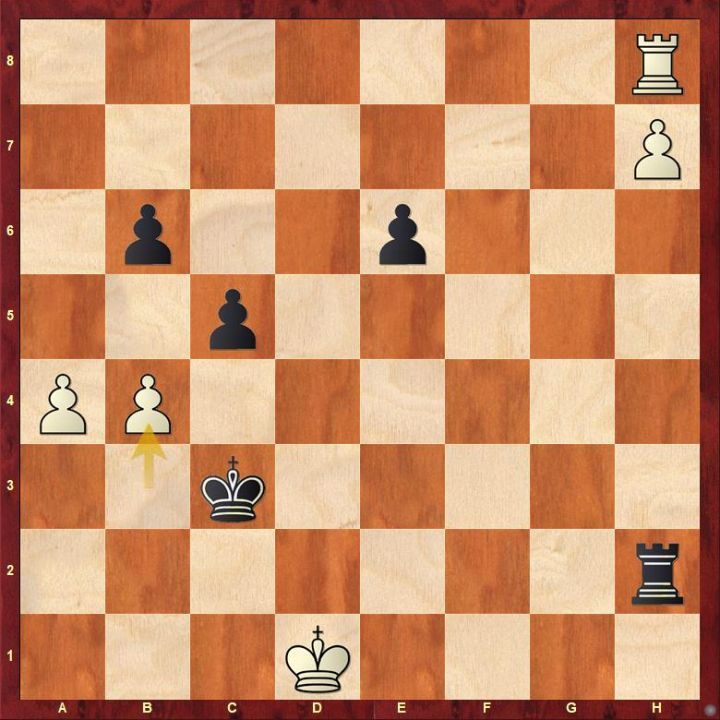 It was all over for white after 52.b4. Instead 52.Ke1 would have kept chances alive for a draw.

Praggnanandhaa bounced back from his loss and beat Johan-Sebastian Christiansen convincingly. 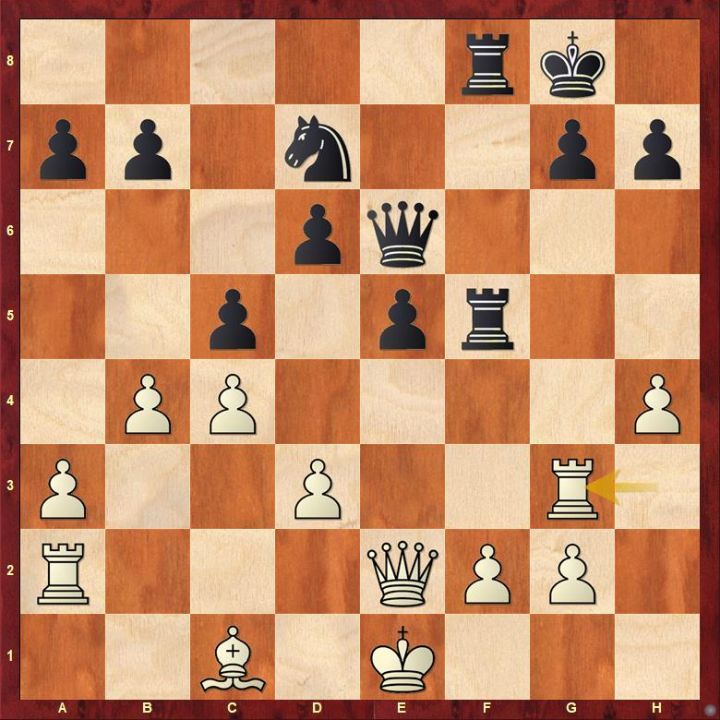 Black has a huge advantage in this position. Try to think like Pragg and find out how he continued after 23.Rg3.

Round 13: Pragg holds Carlsen to a draw

Praggnanandhaa played absolutely fantastic against Carlsen and just like Vidit on the previous day, he played a near flawless game where he did not allow any chance to the world champion and eventually made a draw. He even declined a perpetual check draw and played further. Of course he knew it would still be a draw but it shows that the boy loves to fight.

Vidit had a quiet draw with Leinier Dominguez Perez.

Round 14: Pragg held Nakamura to a draw

Vidit scored a 98-move long marathon victory over Gawain Jones. However Jones could have made things difficult for Vidit early in the opening. 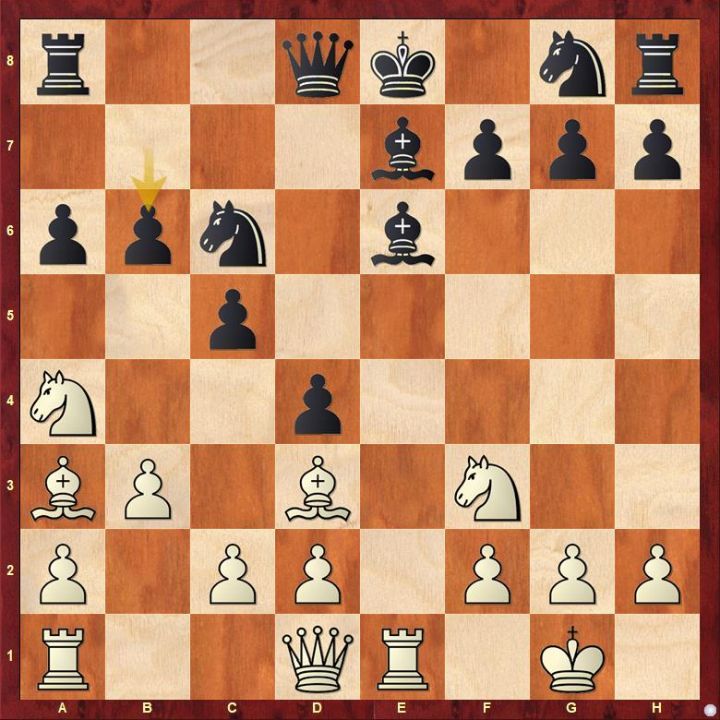 12...b6 is a mistake. Find out why. The game continued with 13.Qe2 which is also fine and white still has a good chance to stir up trouble after 13...Nf6 14.Bxa6 Qc7 except 15.c3 only slowed down the momentum. What was the better continuation instead?

Praggnanandhaa made another well fought draw, this time against Nakamura.

Round 15: Pragg draws with Firouzja

In a battle of the prodigies, Praggnanandhaa made a comfortable draw with Firouzja.

Vidit also drew his final game of the Prelims with Radjabov.