Six players share the lead at the end of day 2 of Champions Chess Tour Airthings Masters. Dubov, Nakamura, Aronian, Carlsen, Radjabov and So are in the lead with 4.5/8 each respectively. Harikrishna started the day with a loss against Giri then he drew with Grischuk and Nakamura. In the final round of the day, Harikrishna had a good chance to push for a win against Nepomniachtchi but he settled for a draw. Carlsen scored his first victory of the event over Dubov and then drew the remaining three games. Round 9 continues tonight Monday 28th December from 7:30 p.m. IST. Watch the live stream on ChessBase India youtube channel with IM Sagar Shah and IM Soumya Swaminathan. Photo: ChessBase India Live stream

Day 2 of the Champions Chess Tour Airthings Masters witnessed 21 out of 24 games to have ended up in draws which means only 12.5% games were decisive. One of the primary reason for this type of outcome is 66.67% of players will advance to the knockout stage as only four players will get eliminated from the preliminaries. Dubov was involved in two out of three decisive games which obviously asserts the well known fact that Dubov plays decisive games irrespective of tournament situation. Apart from Dubov, Giri was the only other player who was also involved in two out of three decisive games of the day.

Round 5: Maximum wins of the day

Dubov was playing fine against Carlsen and the game was heading towards a draw. However he made a mistake in the endgame which cost him the game. 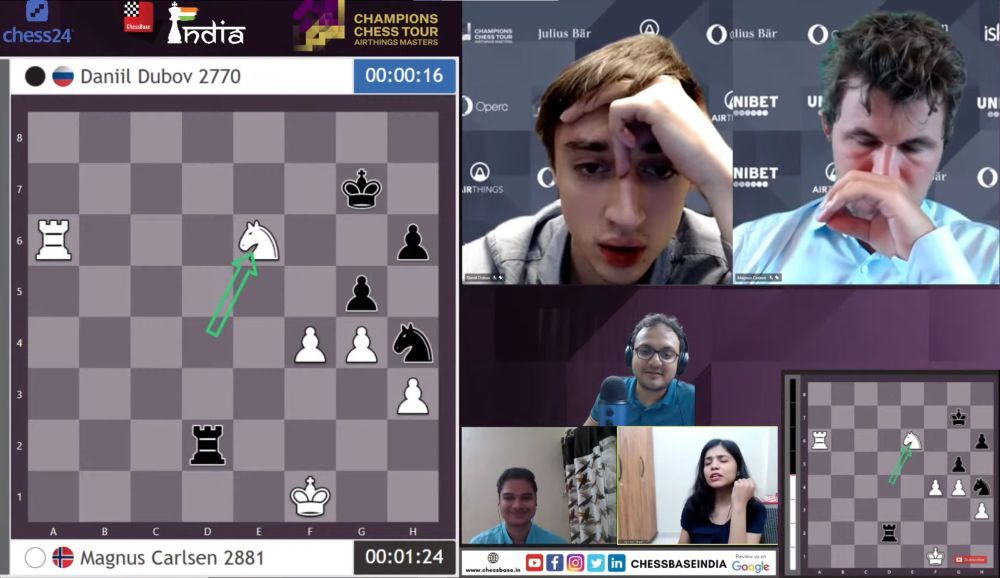 With only 16 seconds left on the clock, it was not easy to decide the correct square for the king. Can you find it? 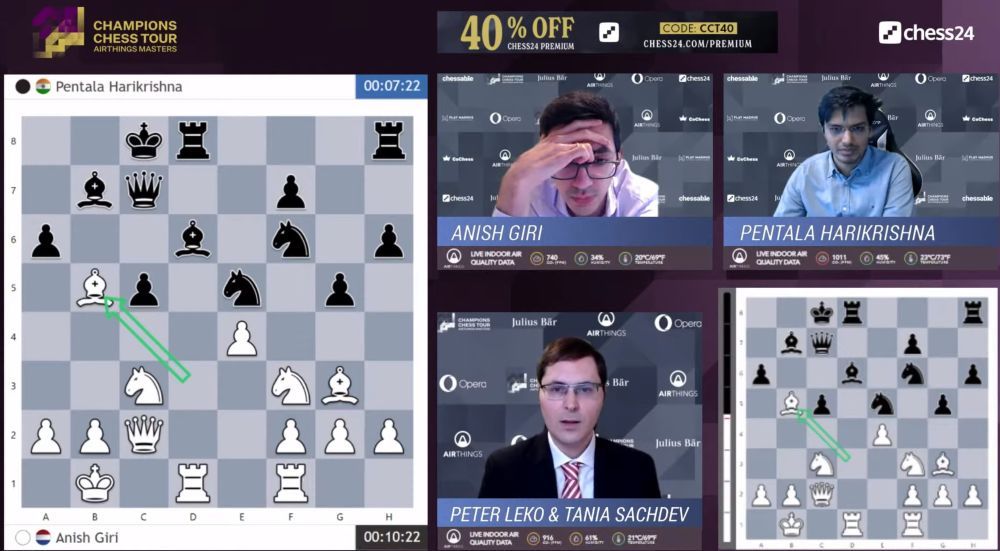 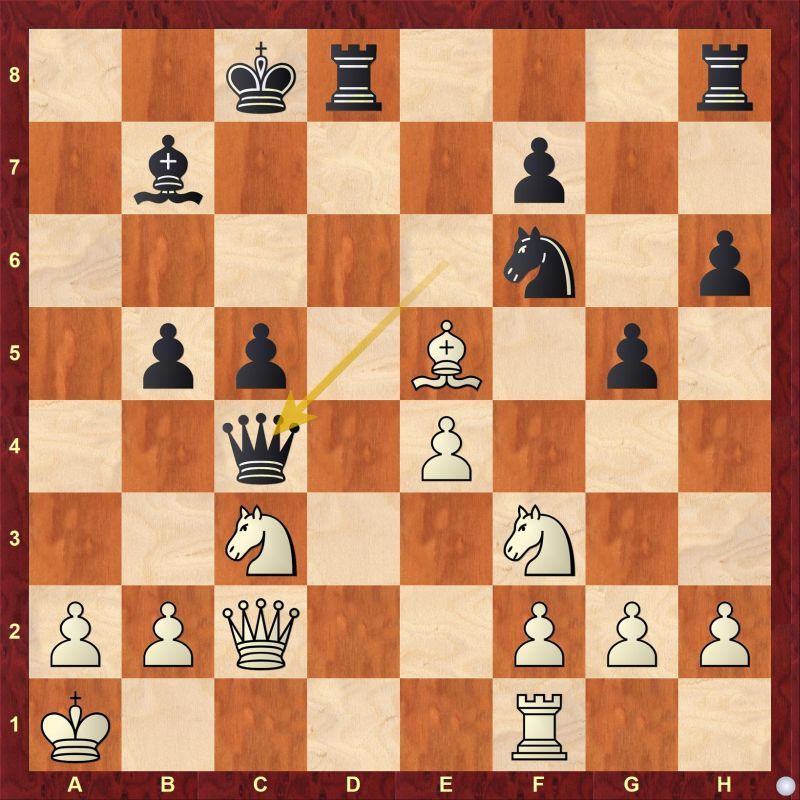 21...Qc4 turned things into white's favor. Instead 21...Qa6 would have kept black afloat. It turns out that defending f6-knight was more important.

Radjabov got a decent chance in the endgame to go for a win against Grischuk but he missed it. 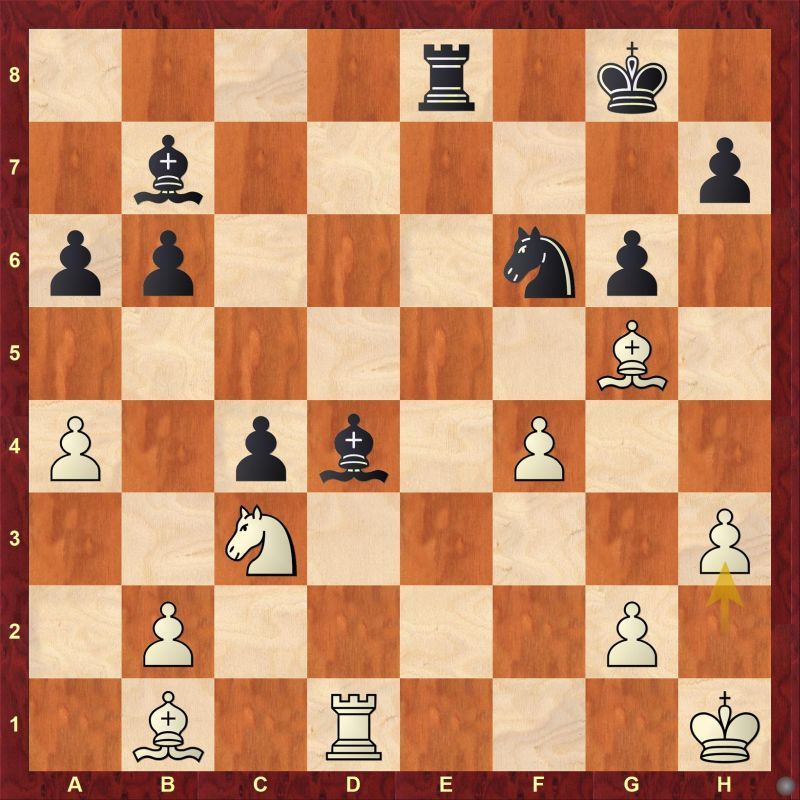 27.h3 might seem like an unassuming move but it's actually a mistake. Find out why. Black played 27...Bxc3 correctly but after 28.bxc3 he went with 28...Ne4 which allowed white to equalize with 29.Bxe4

Round 6: Dubov scores the final victory of the day

Aronian made a huge mistake in a seemingly equal endgame against Vachier-Lagrave but the Frenchman was unable to spot it. 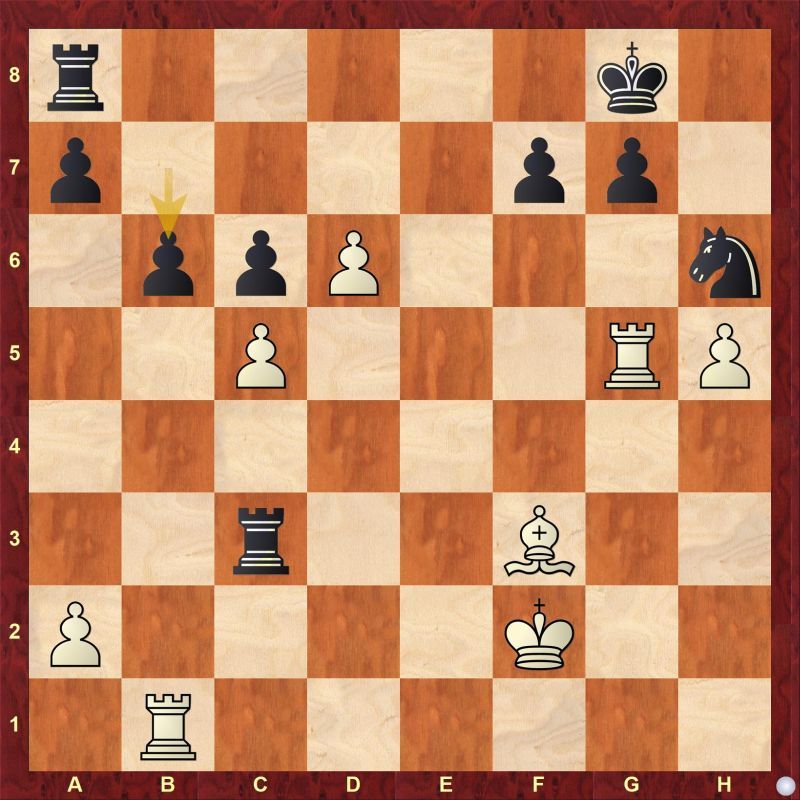 Harikrishna made a solid draw with Grischuk. Although he could have pushed a bit more in the middlegame. 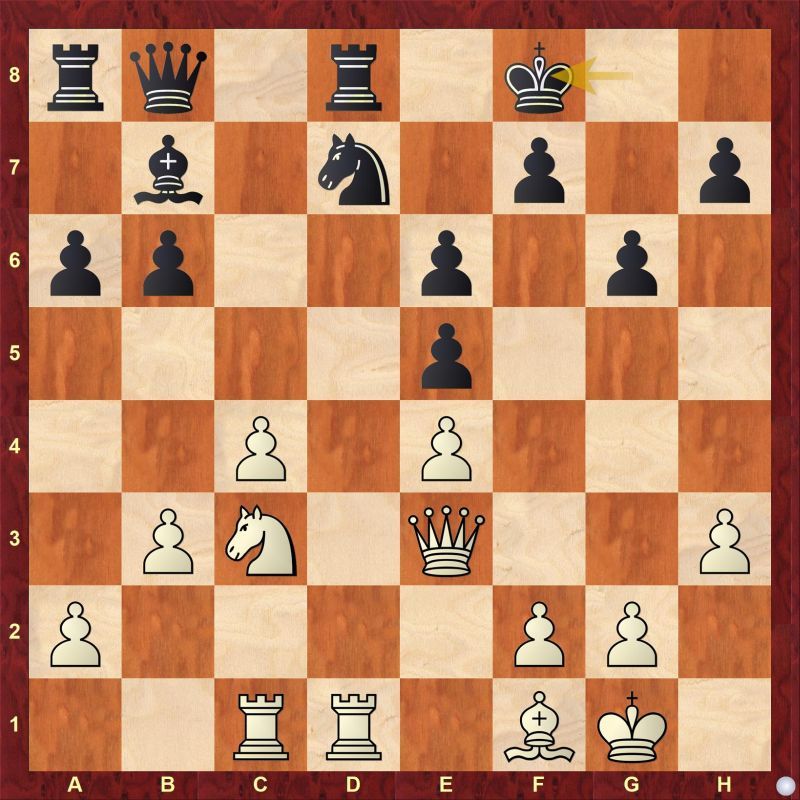 White should have probably gone with either 23.b4 or h4 here. b4 looks better as it takes away the c5 square for the knight.

Dubov scored third and final victory of the day over Giri. 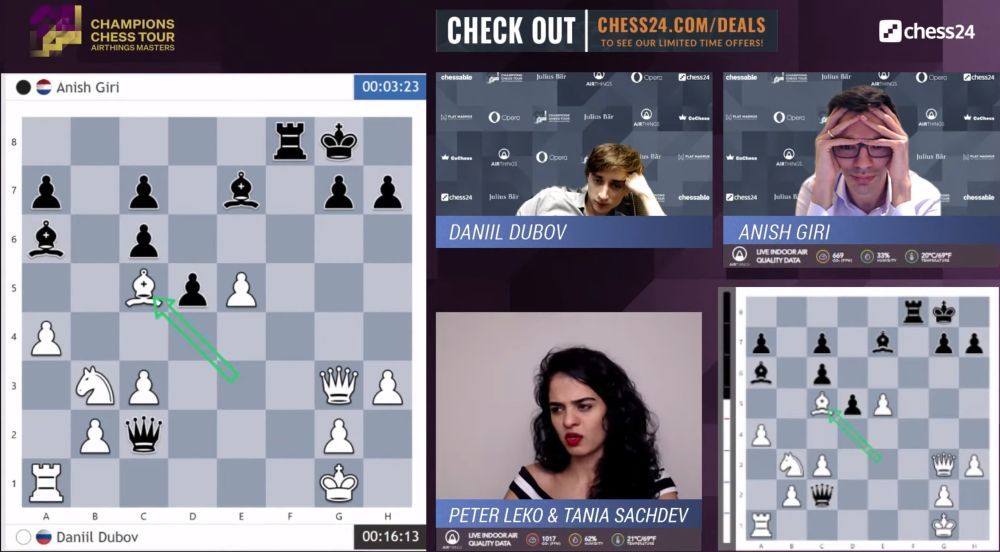 19...Qc2 allowed white to play the fantastic 20.Bc5 which turned things completely in white's favor.

Dubov could have made things exciting as he is the one who could have created some chances against Grischuk who was pretty low on time as usual in Round 7. 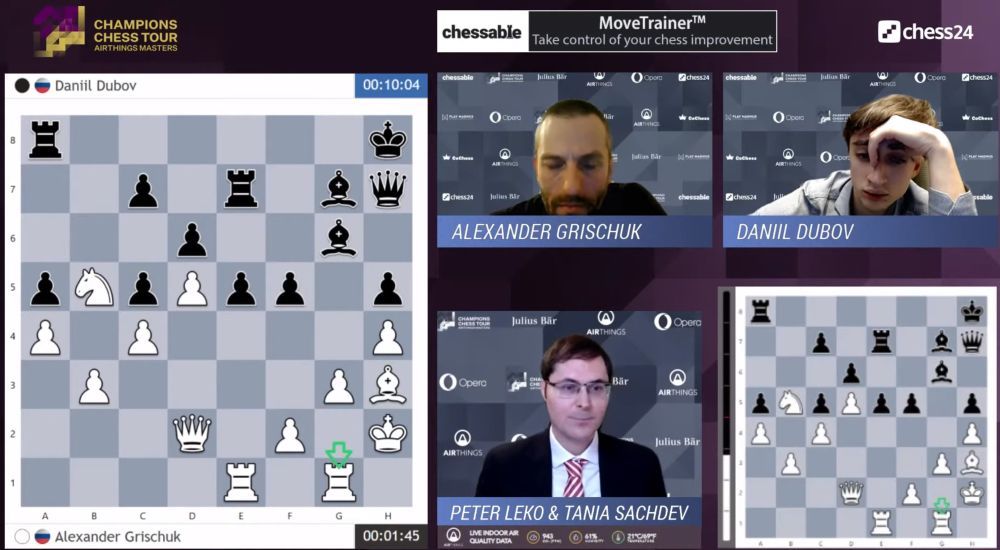 Find out what was the chance black could have taken after 32.Rgg1

In the final round, Hari could have pushed for a win as he was ahead by an exchange against Nepomniachtchi but he decided to settle for a draw. 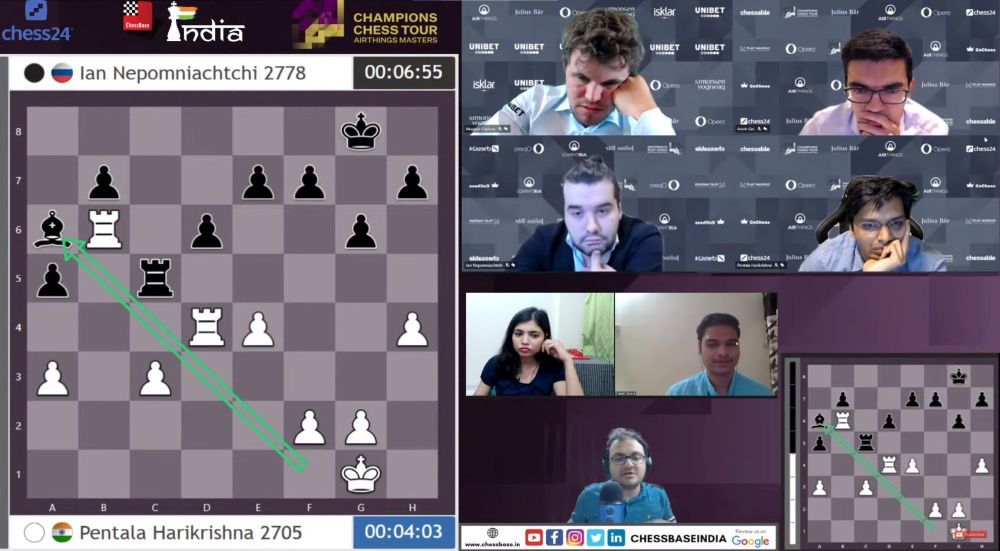 32.Rd5 Rxc3 33.Rxa5 could have been a good try. But the game ended up in a draw by repetition after six more moves.

Replay all Round 5-8 games from Day 2

Six players are in the lead with 4.5/8 | Photo: Champions Chess Tour