During the online era of chess, Carlsen and Nakamura played some slobberknocker games. Meltwater Champions Chess Tour FTX Crypto Cup also got to witness a few. Nakamura crumbled under pressure in the blitz tie-breaks and lost to Carlsen. He will face Radjabov in the Semi-Finals who drew all four games with his good friend Giri. Nepomniachtchi and Caruana also had some very interesting games but unfortunately for the American he missed few opportunities and could not continue his momentum from the Prelims. Nepomniachtchi will play against So in the Semi-Finals starting tonight from 8:30 p.m. IST. Photo: FIDE

So makes short work of Vachier-Lagrave

It doesn't take a fortune teller to predict if Carlsen-Nakamura will be an exciting match. As always they did not disappoint. Nakamura once again started the day with a win but Carlsen delivered the equalizer immediately. After making two draws, Carlsen won both blitz tie-breaks to advance to the Semi-Finals. So took only three games to win the third set by 1-2 as he had already won the first set. 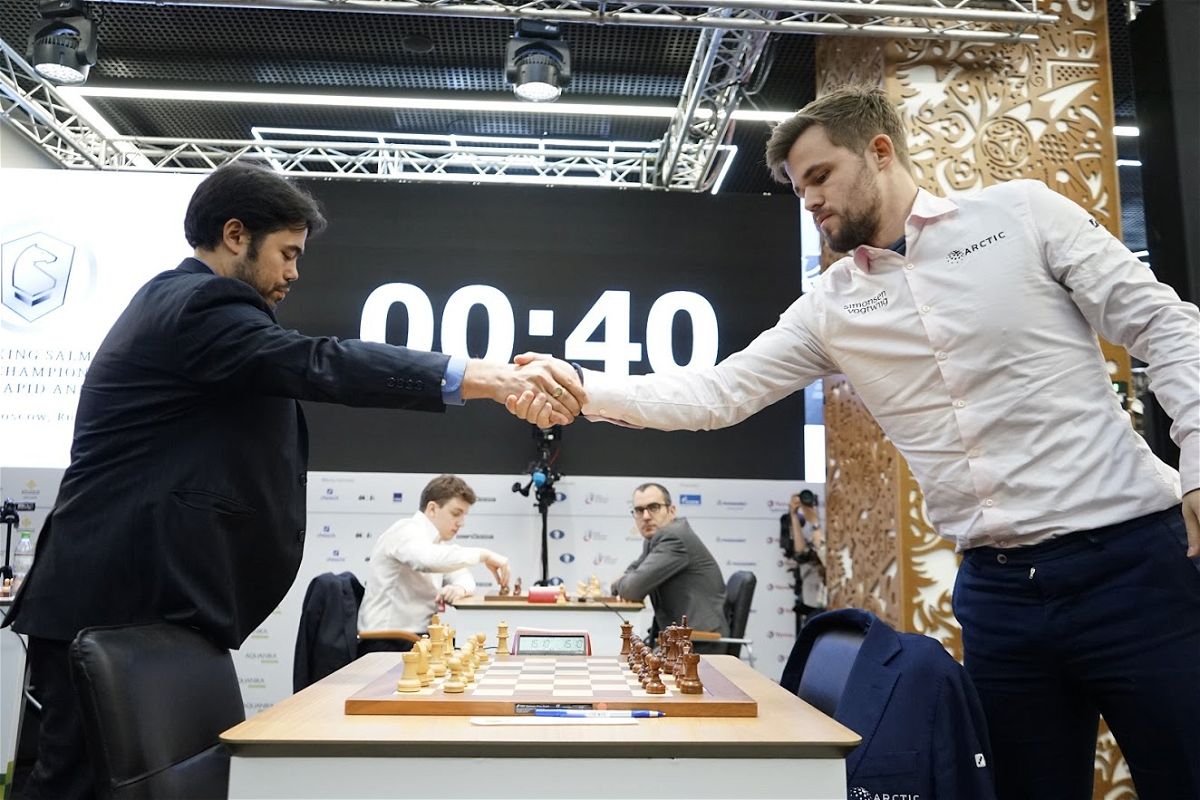 First two games were well contested draws. However Caruana was winning in the final moments of the second game. 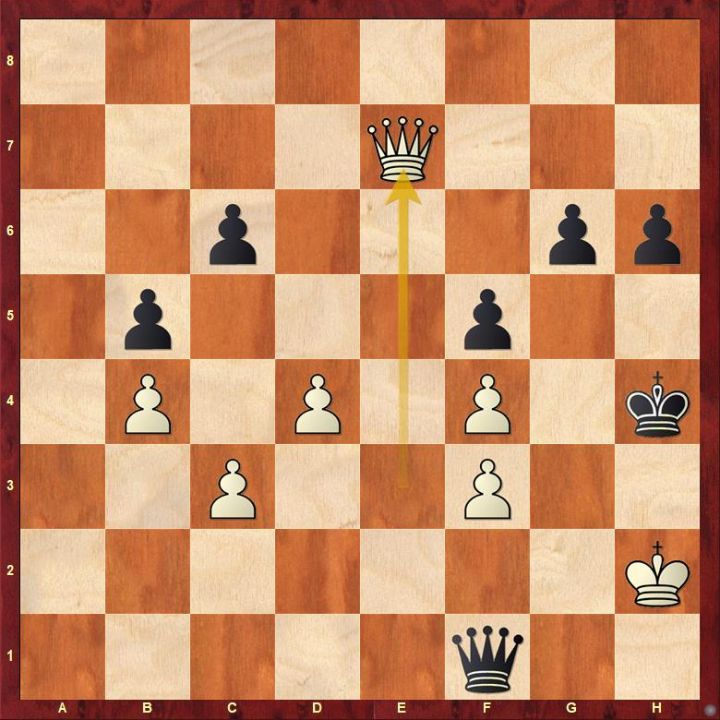 Black's advanced king is a big decisive advantage. How should black continue here to go for a win? Unfortunately Caruana repeated moves with 61...Kh5 62.Qe3 Kh4 to make a draw.

Caruana got a good chance in the third game after Nepomniachtchi made an incorrect queen retreat in the endgame. 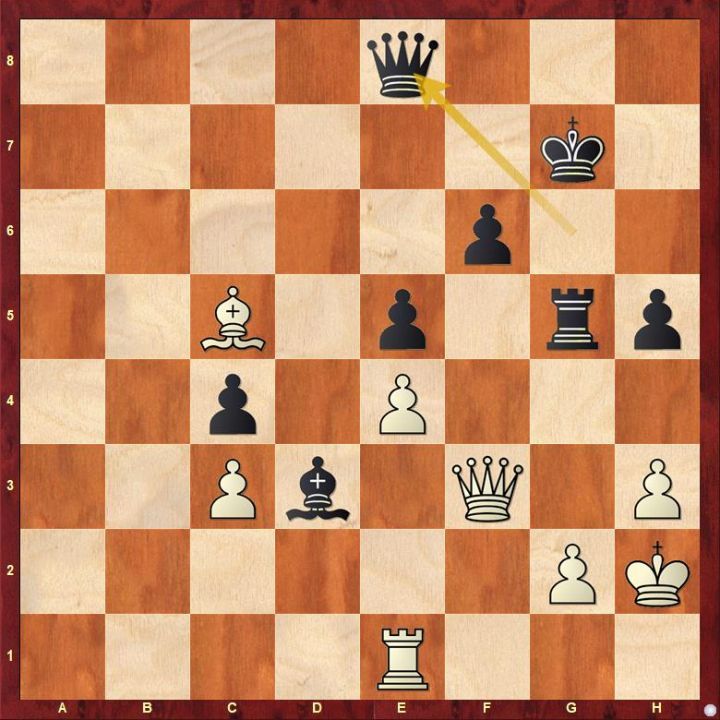 Black needed to make room for the rook so that it does not get trapped after Be3 but 48...Qe8 certainly was not the right way. Can you find out why it isn't? Instead black could have gone with 48...h4. 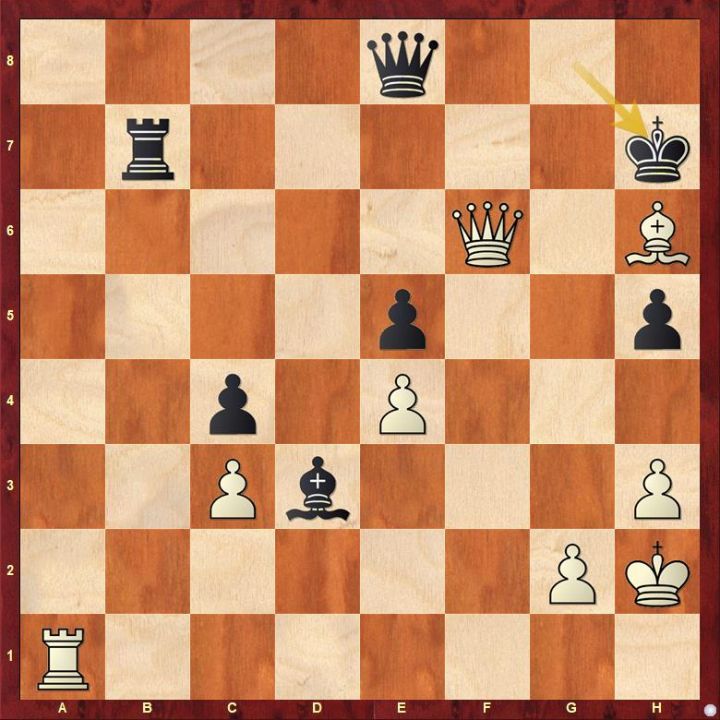 White had a very good chance after 53...Kh7 but Caruana did not seize the opportunity and went with 54.Be3 and lost the significant advantage. Find out the better continuation and winning plan for white in the above diagram. The score remained tied at 1.5-1.5.

The fourth game was also another solid draw which means the second set was tied at 2-2. Thus Blitz tie-breaks were enforced. Nepomniachtchi won the first game after Caruana made a tactical error. 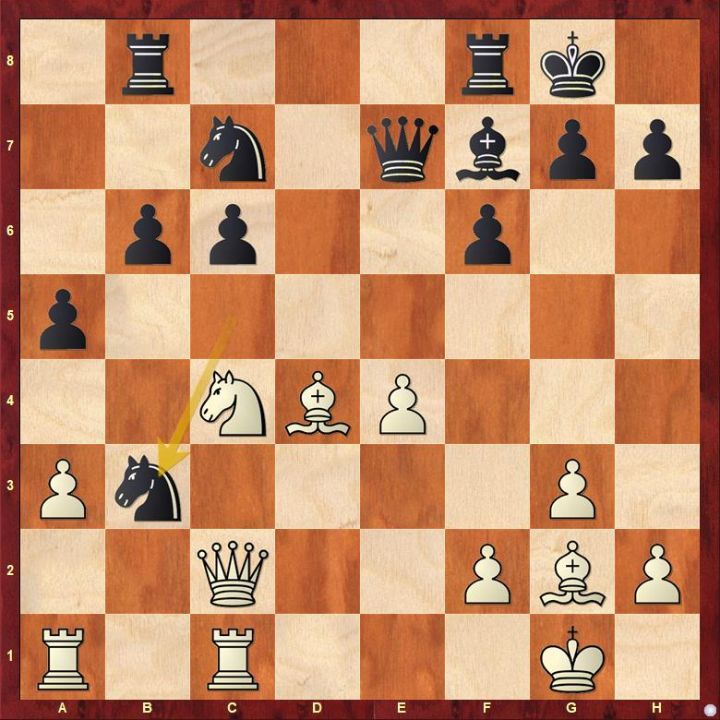 25...Nxb3 is actually but after 26.Qxb3, b5 is incorrect for black. Try to find out the better continuation for black to retrieve the sacrificed knight. Nepomniachtchi took 3-2 lead.

Caruana was better for the majority of the second blitz game but he could not seize the chances he got. 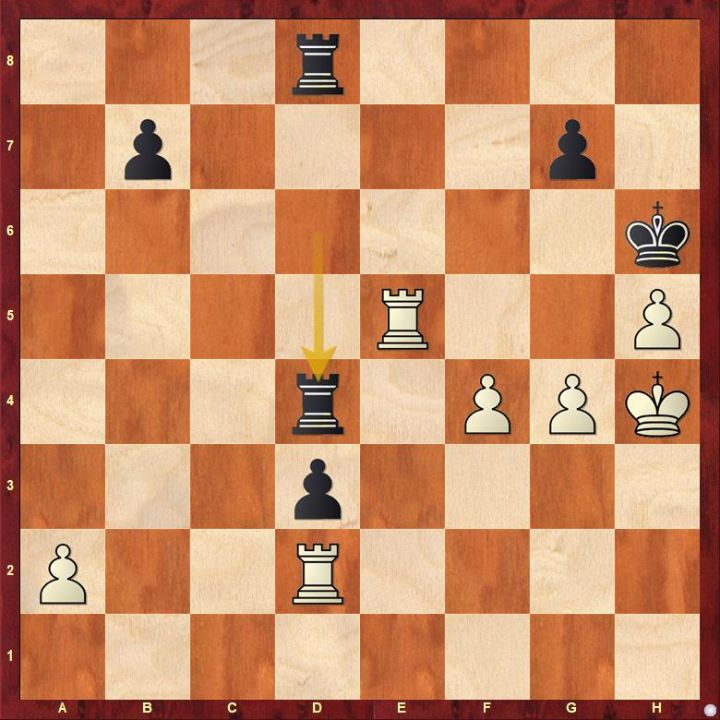 One of the best chances white had in the entire game was after 43...Rd4. The game continued with 44.Re6+ which is certainly not the best continuation. Find out what white should have done instead along with the plan. The game eventually petered out to a draw which means Nepomniachtchi won the second set 2.5-3.5 and he advanced to the Semi-Finals where he will face So.

Surprisingly Vachier-Lagrave went for a draw by repetition in the first game. The Frenchman tried to create some chances in the second game but there wasn't as much as he would hope for. 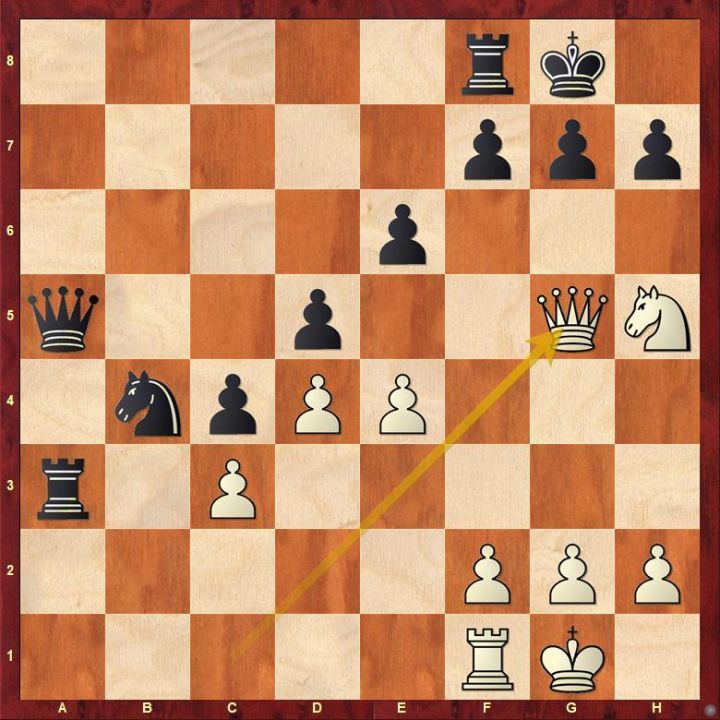 White tries to create some chances on the kingside with 27.Qg5 but there was not more than a draw. Vachier-Lagrave overpushed and lost the game. Thus So gained a 0.5-1.5 lead.

Although So could have pushed for a win, he made a comfortable draw in the third game as it was enough for him to advance to the Semi-Finals. He won the set by 1-2.

Nakamura once again started the day with a win over the world champion. Carlsen made a correct sacrifice but then he did not follow through correctly. 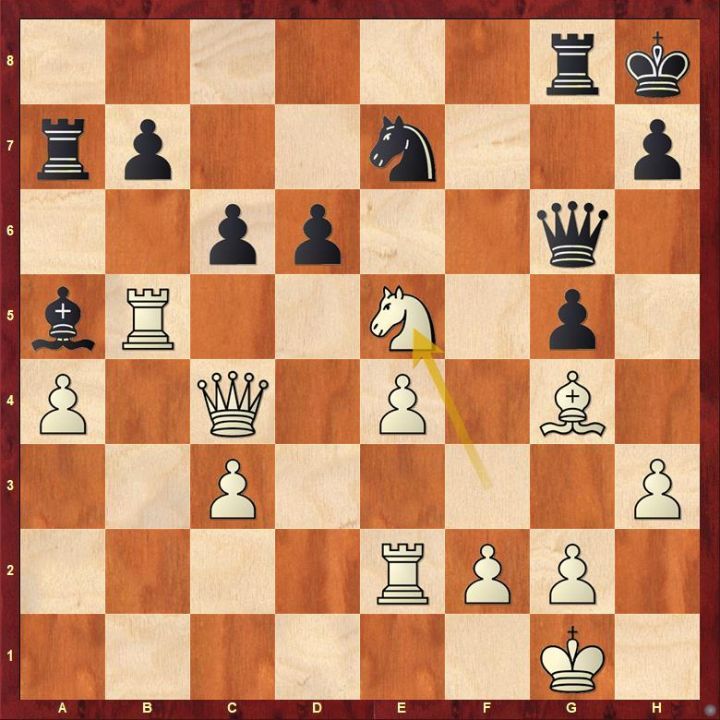 26.Nxe5 is a correct sacrifice but after 26...dxe5 white did not follow through correctly with 27.Rxe5. What was the better continuation for white instead? Carlsen was down in material which made it very difficult for him to get back in the game and eventually he lost it. Thus Nakamura took 1-0 lead.

It is no secret that Carlsen is dangerous when he has vengeance in his mind. Just like the first set, the world champion bounced back in the second game and leveled the score 1-1. 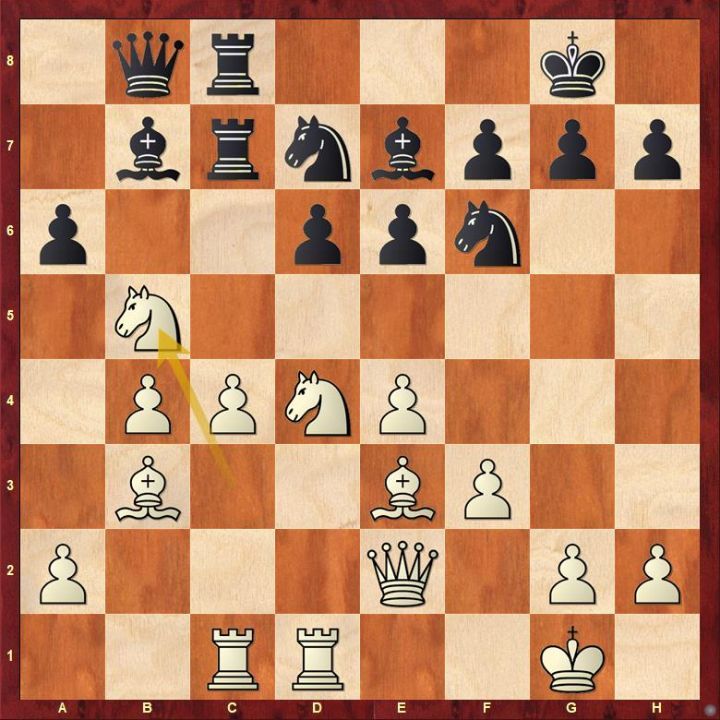 Just like the world champion in the first game, Nakamura also makes a correct sacrifice with 19.Ncxb5, but he was unable to follow through properly. After 19...axb5 20.Nxb5 h5 white continued with 21.a4. What was the better continuation? Nakamura did it eventually but it was too little too late. The Speed King lost the pawns which could have given him a more dominant position.

The third and fourth game ended up in draws. The set was tied at 2-2. It was time for Blitz tie-breaks. Carlsen won the first blitz game after Nakamura went uncharacteristically passive and then blundered a piece. 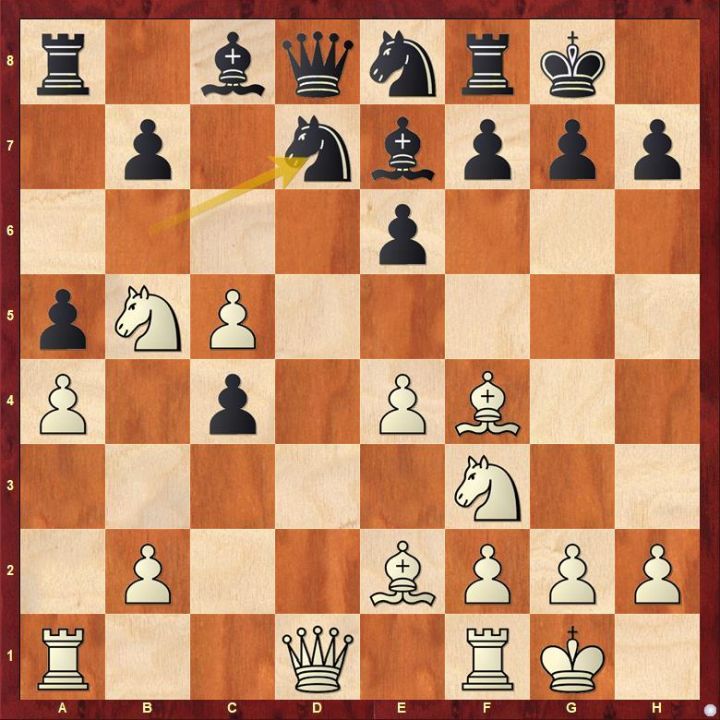 12...Nd7 was uncalled for. Instead 12...Qxd1 13.Rfxd1 Bxc5 was a better continuation for black. Nakamura had a momentary blindspot and blundered a piece in another ten moves, putting himself in a must-win situation to force Armageddon.

Nakamura crumbled under pressure as he played passively once again and lost the game. 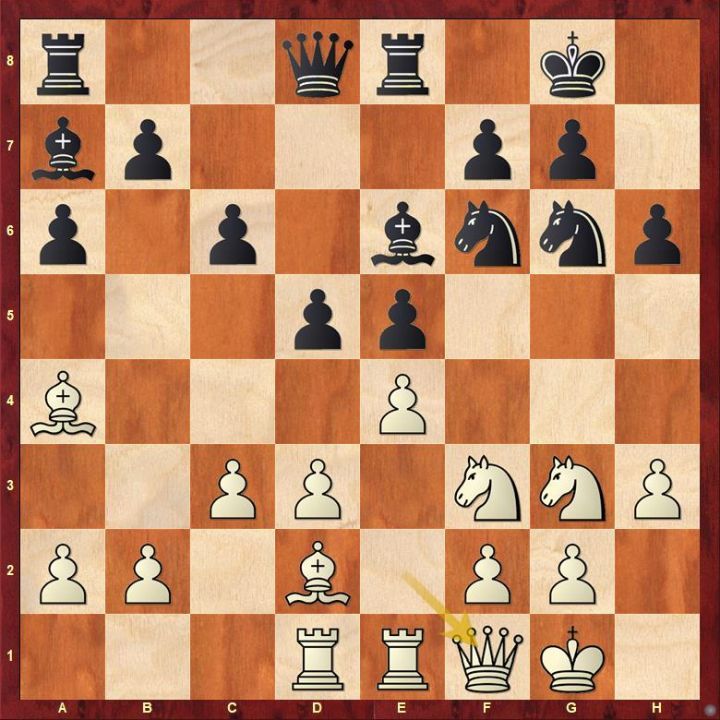 16.Qf1 is uncharacteristically passive for the position. 16.Be3 or exd5 were one of the better choices for white. Carlsen won the second set 4-6 and advanced to the Semi-Finals where he will face Radjabov.

The first and third game was an exactly same quick 15-move draw. Second and fourth games were a well-fought draws. The second set was tied at 2-2, since Radjabov had already won the first set, he advanced to the Semi-Finals.

Replay all Quarter-Final games from Day 2

There is a good chance for Nepomniachtchi-Carlsen at the Finals | Photo: Champions Chess Tour