Carlsen seems to be back to his true form as he won the first set 2.5-0.5 against Aronian in the Quarter-Finals of Meltwater Champions Chess Tour Magnus Carlsen Invitational. The world champion was winning the third game too but he did not push too hard as a draw was enough for him to win the first set. So is the only other player who had a dominant showing Firouzja. Although the younger talent had a good opportunity to win the third game but he made a draw and lost the set. Quarter-Finals continue tonight from 9:30 p.m. IST with live commentary by IM Sagar Shah and Amruta Mokal on ChessBase India youtube channel. Photo: chess24 live stream

Aronian and Firouzja in a must-win situation

Magnus Carlsen and Wesley So completely decimated their respective opponents and scored an emphatic 2.5-0.5 victory in the first set of the Quarter-Finals. Their opponents Aronian and Firouzja must win the second set to keep their Semi-Final hopes alive. Meanwhile, Giri - Vachier-Lagrave and Nakamura - Nepomniachtchi ended up in a 2-2 tie but they also traded blows. Nepomniachtchi was completely winning the endgame against Nakamura which meant he could have won the first set but he settled for a draw.

Aronian decided to give his two minor pieces for Carlsen's rook in the first game. 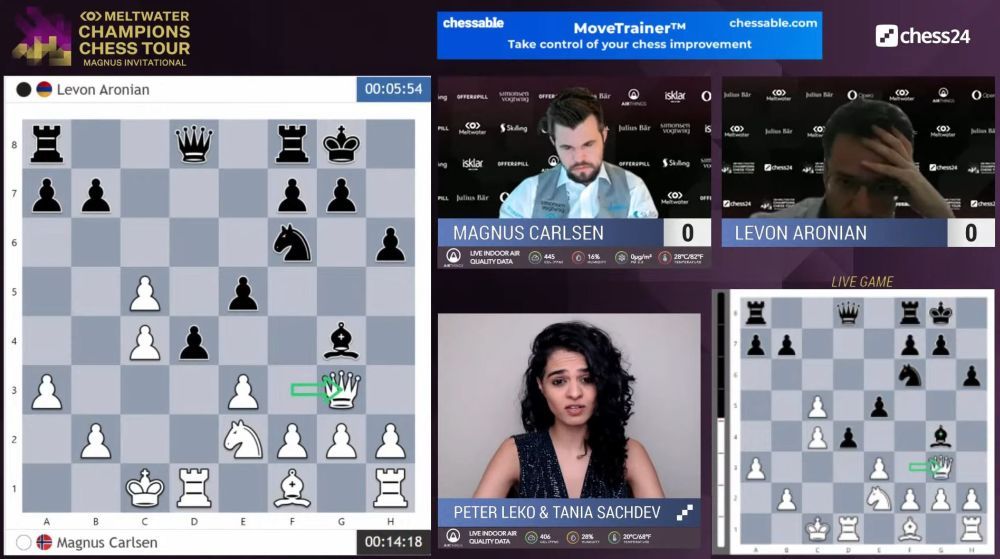 Will you play 14...Ne4 here. It is not certainly a mistake but in the long run it was found that black did not get anything substantial out of it either. Previously 14...d3 was played in this position. 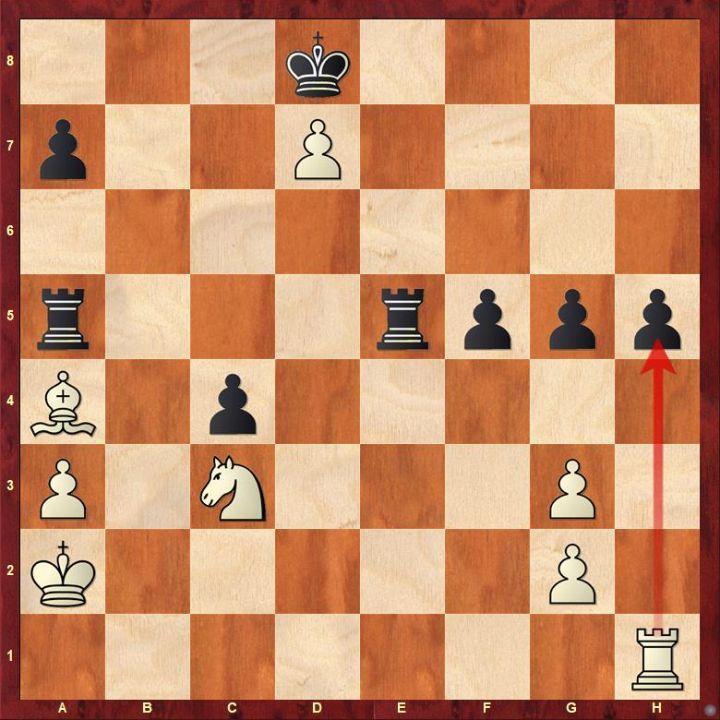 Aronian decided to play 37...Rxa4 and after 38.Nxa4, black continued with 38...Re2+ which was a mistake. What was the better continuation?

In an already difficult position, Aronian made an erroneous decision which cost him the game. 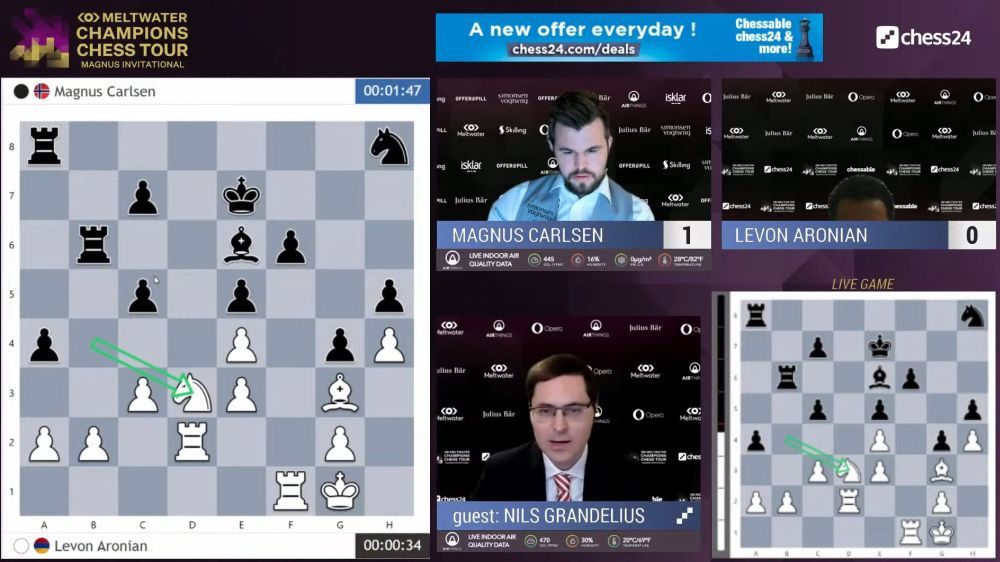 Find out why 29.Nd3 is a blunder. Carlsen correctly spotted it and won the game in the next four moves. Thus he took a 2-0 lead in the first set.

Carlsen had decisive advantage in the third game too. Since a draw was enough for him to win the set, he did not push much for a win.

Giri got a huge decisive advantage against Vachier-Lagrave but he was unable to capitalize on it. 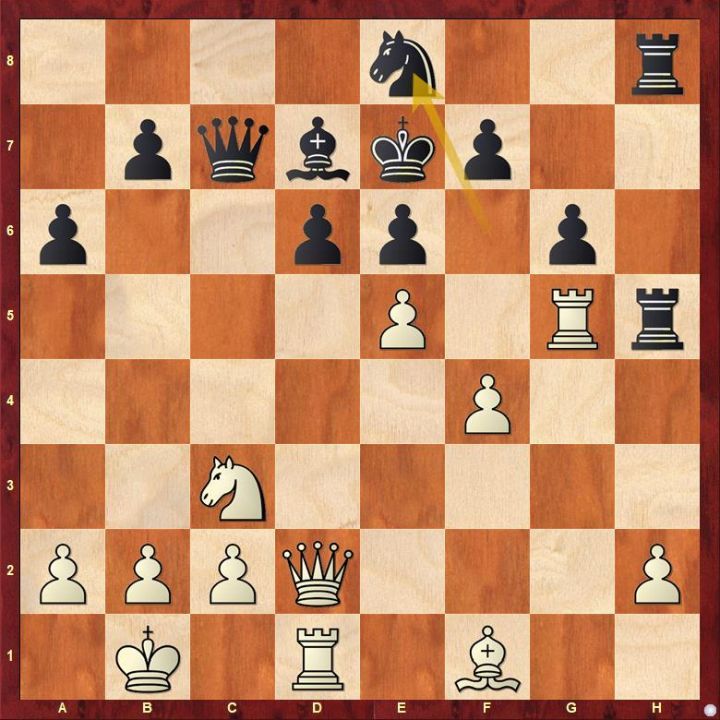 One of the best opportunity white had in the game was after 19...Ne8. White missed it and played 20.Ne4. What did white miss?

Vachier-Lagrave made an ambitious approach in the second game which seemed better for him but in the end Giri capitalized on his opponent's mistake. 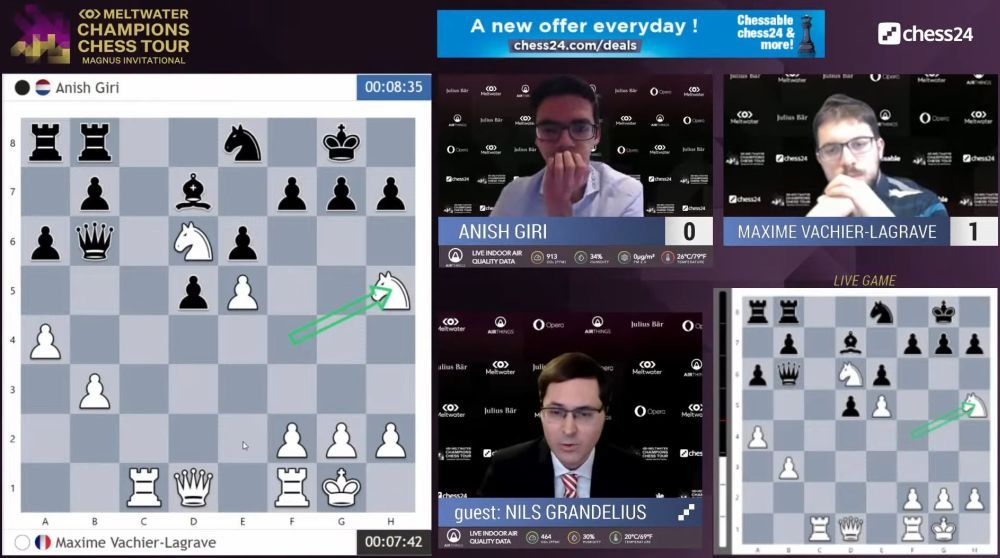 The idea of Nh5 is correct but execution was not so much. White needed to play 21.Nxe8 before going Nh5. Going Nh5 early allowed black to not only regroup his pieces but also gain the critical e5-pawn which eventually turned out to play a key role in white's loss. The score became tied at 1-1.

The third game was a hard fought draw where Vachier-Lagrave was better in the endgame.

The fourth game was an 18-move short draw, thus the first tied at 2-2.

So won the first game as Firouzja made some incorrect decisions in the middlegame. 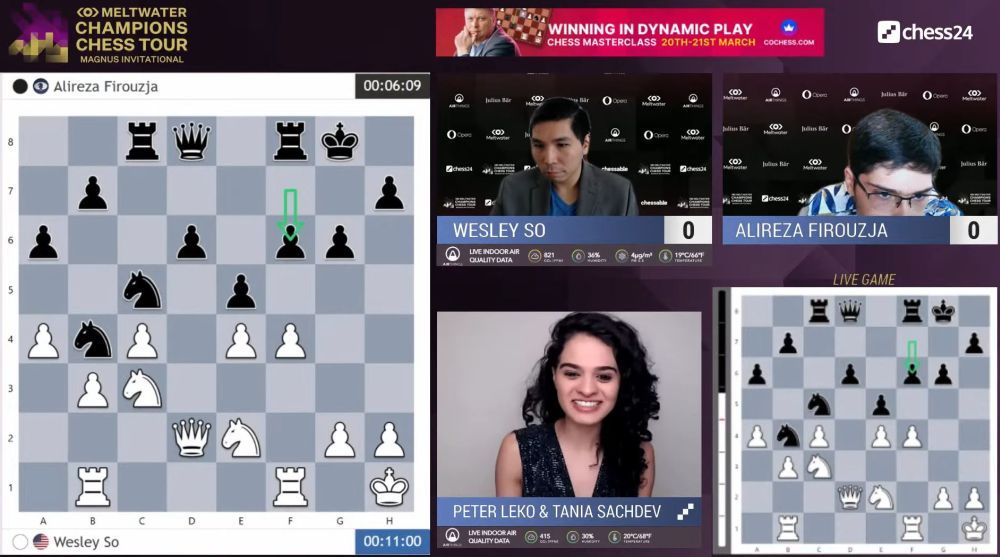 Black needed to play 21...exf4. Instead, 21...f6 was played which prompted white to go for 22.f5 and gain complete control of the position. Rest was just a matter of technique and So converted it with ease.

In a seemingly equal position in the endgame, Firouzja got an opportunity to make a comeback but he was unable to seize it. 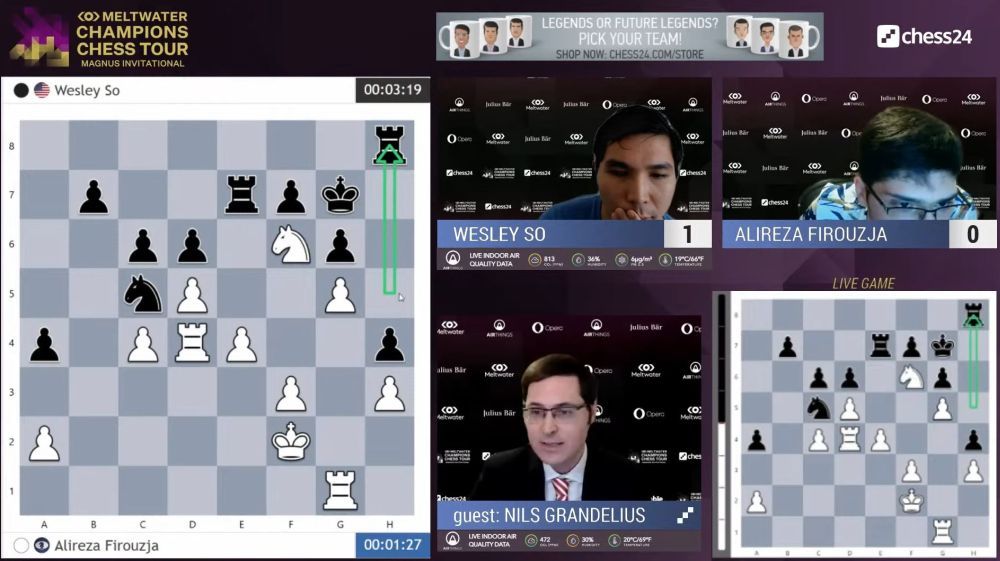 Find out the best plan for white after 46...Rh8. Here the game continued with 47.dxc6 which dwindled away white's advantage. 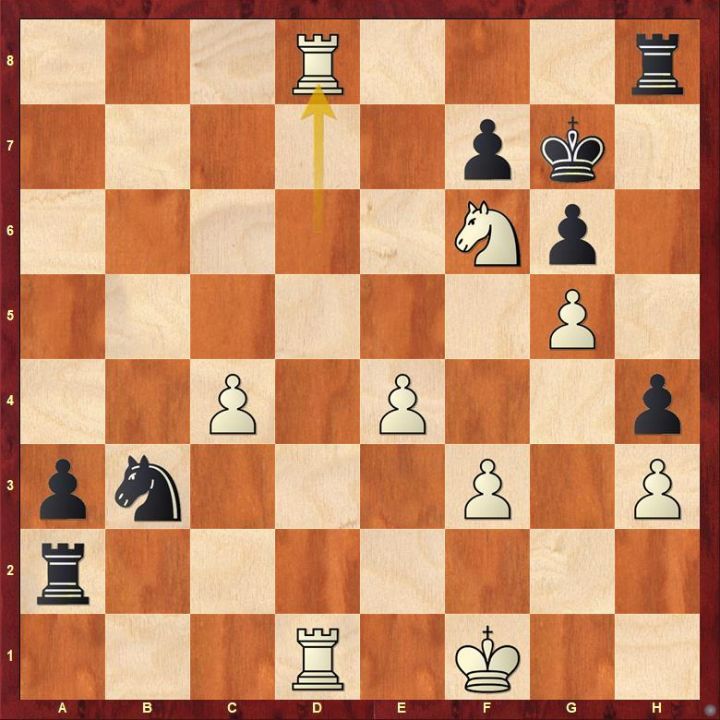 White's final mistake came in the form of 57.Rd8 where white was hoping for a checkmate at g8 but of course black has a way to prevent it.

The third game between So and Firouzja was an exciting encounter. Firouzja got a very good chance to score a win but he missed it. 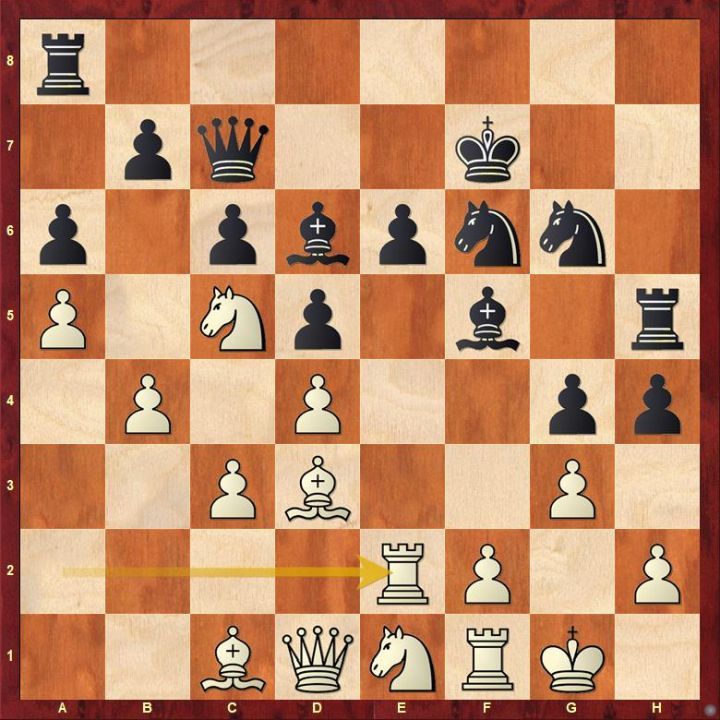 20.Re2 creates a window of opportunity for black. Can you find it? 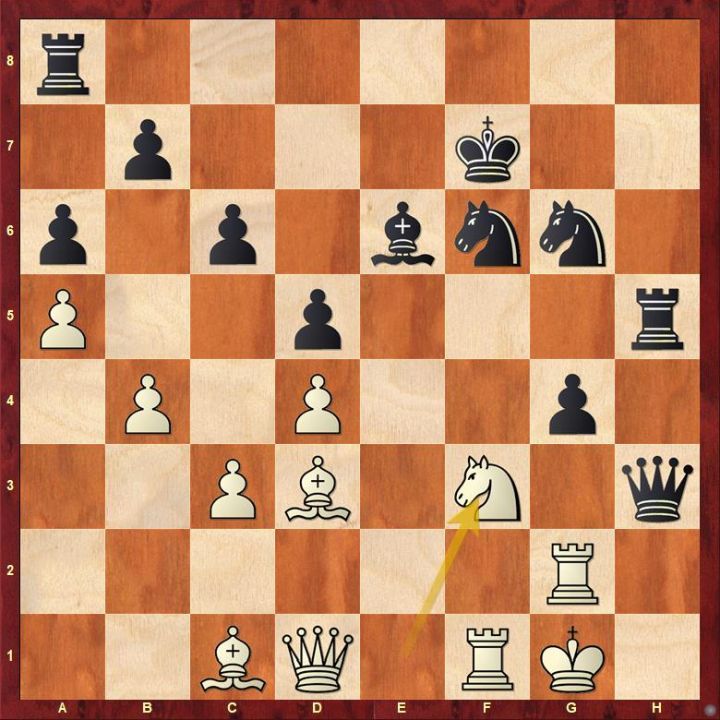 Black had a fantastic opportunity after 25.Nf3. It's a typical idea which Firouzja should have spotted but he completely missed it. What is it? 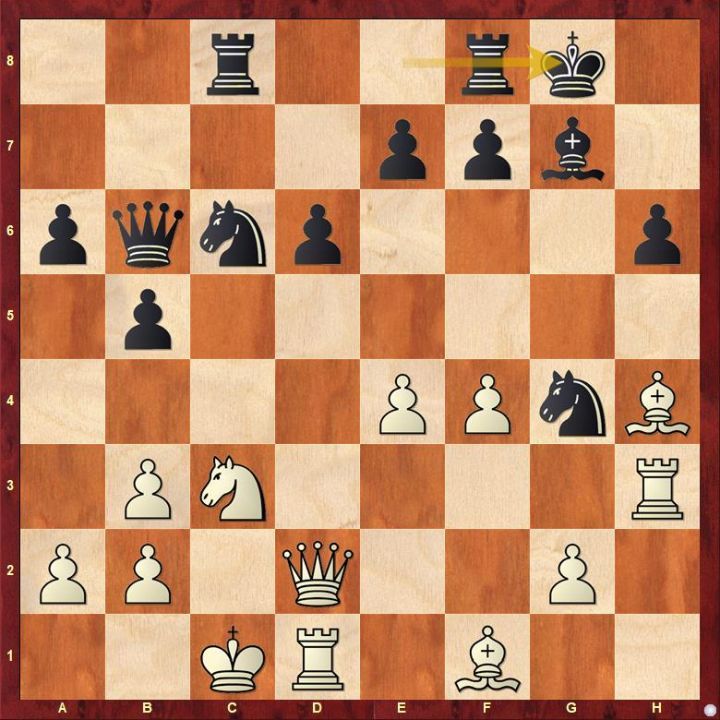 19...0-0 is not the best idea for black as black's kingside is more broken than white's queenside which means black king is less safer than white's king. Soon black landed in trouble. 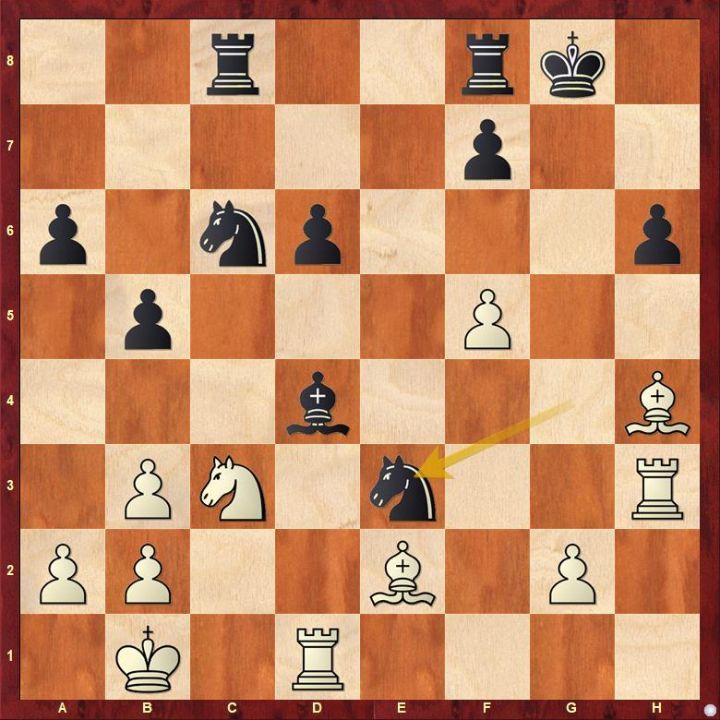 Find out the best continuation for white after 24...Ne3.

Nepomniachtchi made an immediate recovery by scoring a smashing victory in the second game against Nakamura in just 23 moves.

What is the best continuation for white after 14...hxg4 ? Nakamura could not get out of the gate in this game.

The third game was a well fought draw.

Nepomniachtchi was completely winning the same color bishop endgame against Nakamura in the fourth game but he decided to repeat moves and make a draw instead.

Find out the winning continuation for white after 50...Ke8

Nepomniachtchi tweeted the following after his final game of the day. 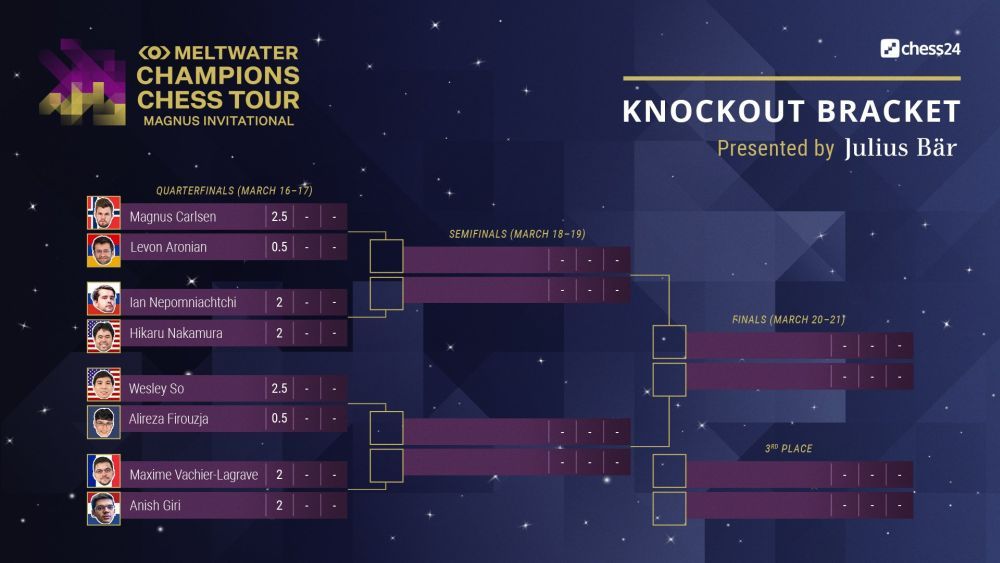 Aronian and Firouzja are in a must-win situation | Photo: Champions Chess Tour