Anish Giri once again had a fantastic day at Meltwater Champions Chess Tour Magnus Carlsen invitational. He started the day with two consecutive victories, making it a five-game winning streak before finishing the day with 8.0/10. Carlsen was held to a draw by Grandelius in the first round of the day. He finished the day with a draw against Radjabov at 7.5/10. But the game of the day was played by So against Aronian which was a magnificent win. Catch Day 3 action tonight on ChessBase India youtube channel from 9:30 p.m. IST. with live commentary by IM Sagar Shah and Amruta Mokal. Photo: Jurriaan Hoefsmit / Tata Steel Chess 2021

So scores a spectacular win

Anish Giri continued his previous days momentum and won the first two games against Anton and Aronian respectively. Grandelius halted his winning streak of five games and made a draw. He made another draw with Dubov in Round 9, before finishing the day with a victory over Mamedyarov who was already having a terrible day. Carlsen was held to a draw by Grandelius and then he scored three consecutive wins before making a lackluster draw with Radjabov. Carlsen is just a half point behind Giri at 7.5/10. So scored a brilliant victory against Aronian in Round 6. He is at 6.5/10 along with Nakamura. 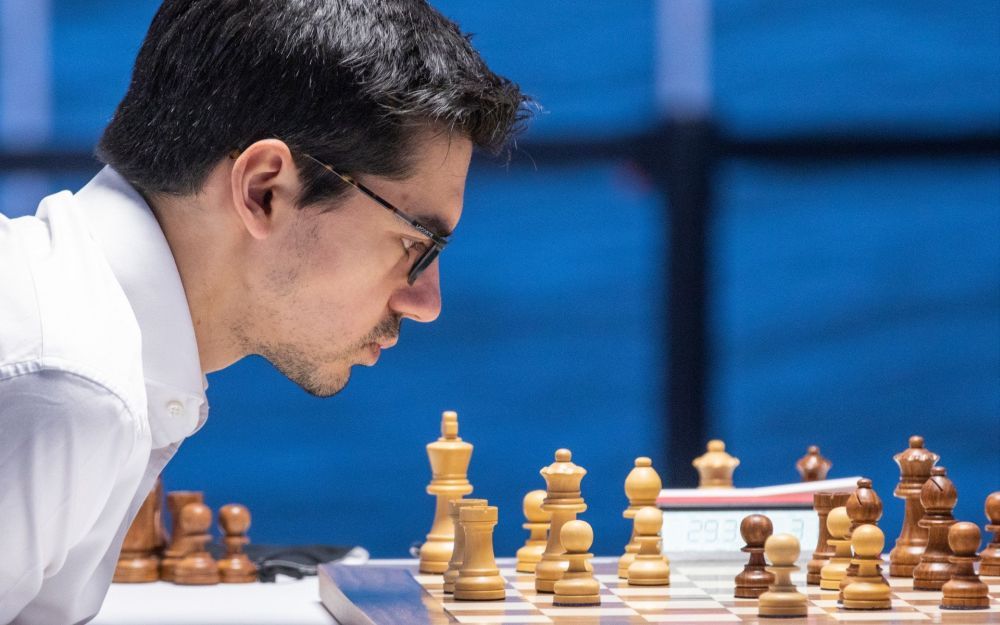 Nepomniachtchi started the day with a victory over Vachier-Lagrave after the latter made some questionable choices including his response of 1...a5 to 1.b3. 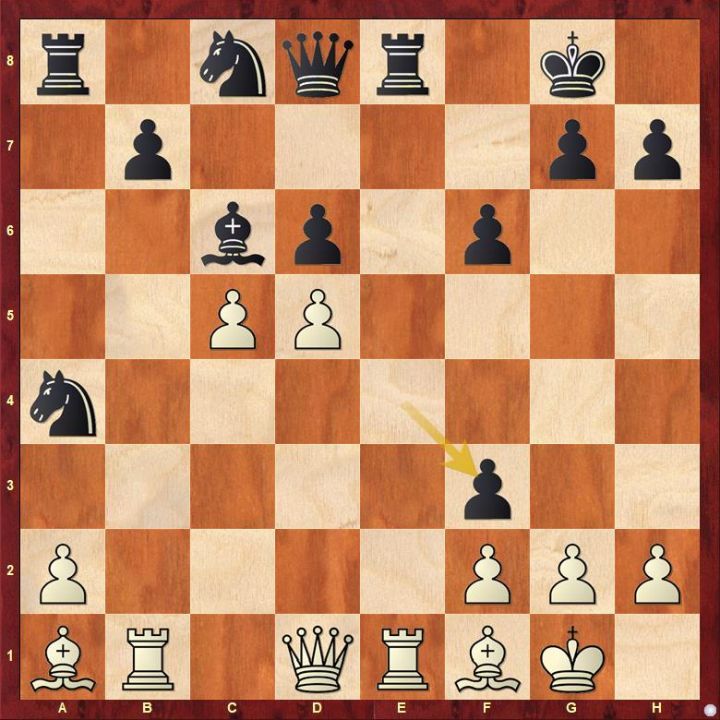 21...exf3 was definitely not a good idea for black. Sure 21...Bd7 is passive but still it wouldn't have made black's position that much worse. 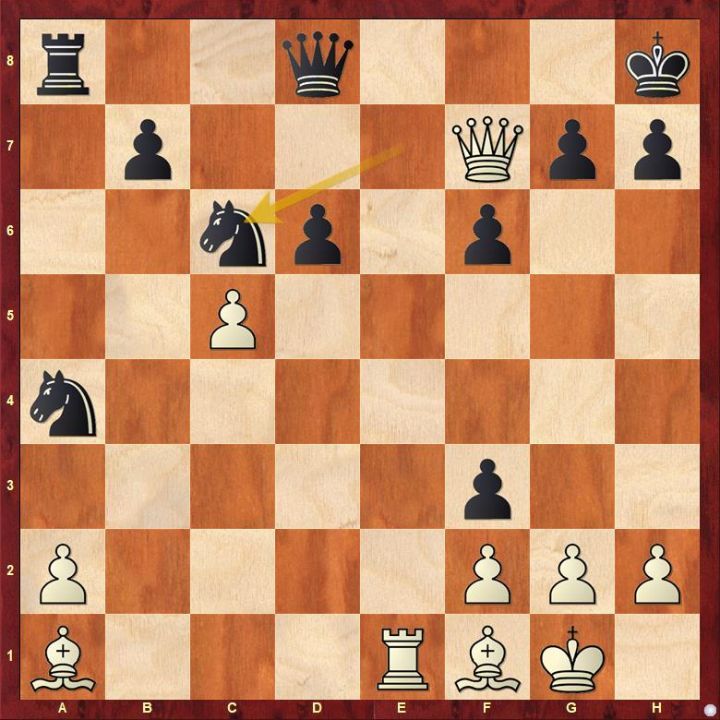 Find out the fantastic move for white after 25...Nxc6. White won the game in another ten moves.

Mamedyarov got the upper hand in the early part of the middle game but he made a questionable exchange sacrifice which turned things into Firouzja's favor. 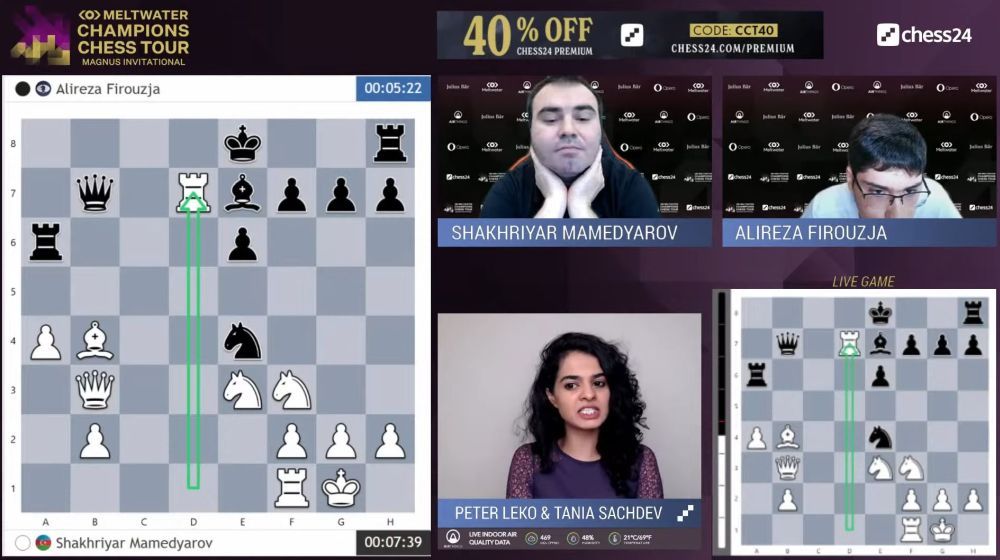 21.Rxd7 was completely uncalled for. A simple 21.Rd4 would have sufficed to maintain the advantage. 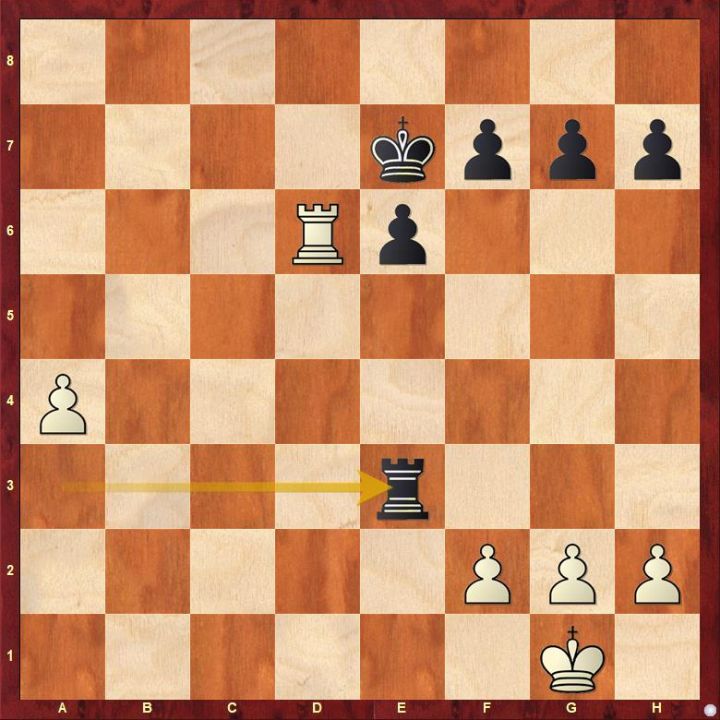 Should white save the rook with 35.Rd1 or take black's rook with 35.fxe3 ? One of them is a game losing blunder which is exactly what white chose.

So played a fantastic game to beat Aronian. 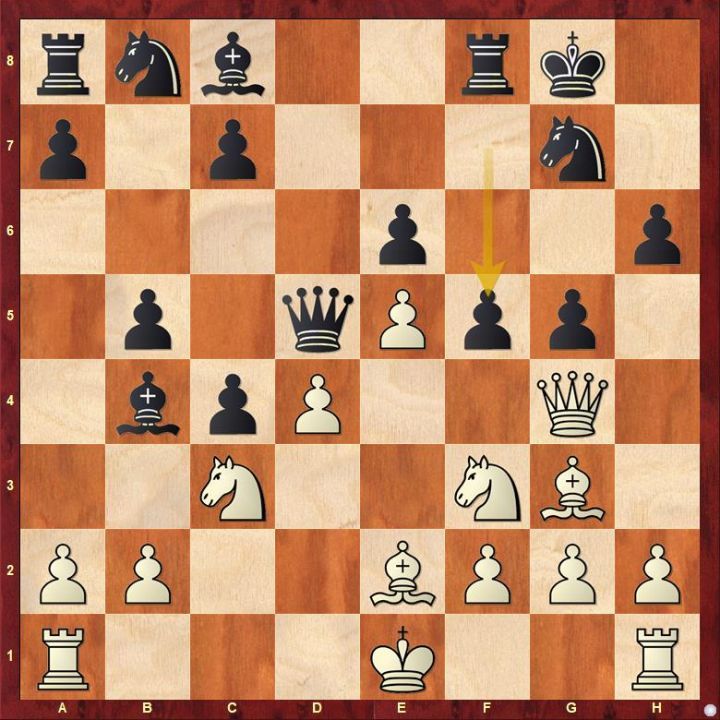 If your first instinct tells you to calculate 14.exf6 then you have chosen the wrong option. White is forced to play 14.Qh3 here. 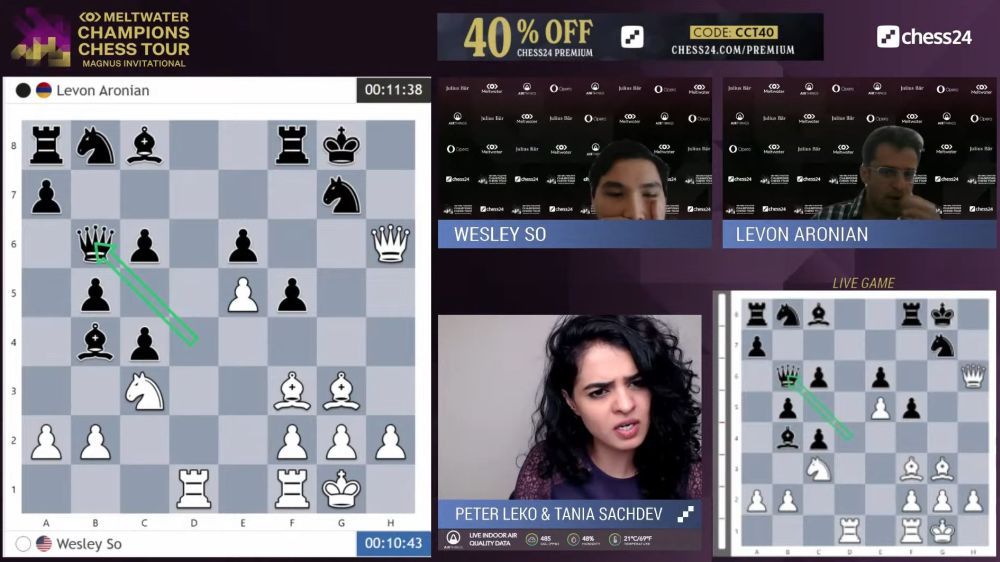 It is evident that white has the upper hand here. Can you find out the creative way for white to continue the attack like So did after 18...Qb6 ? 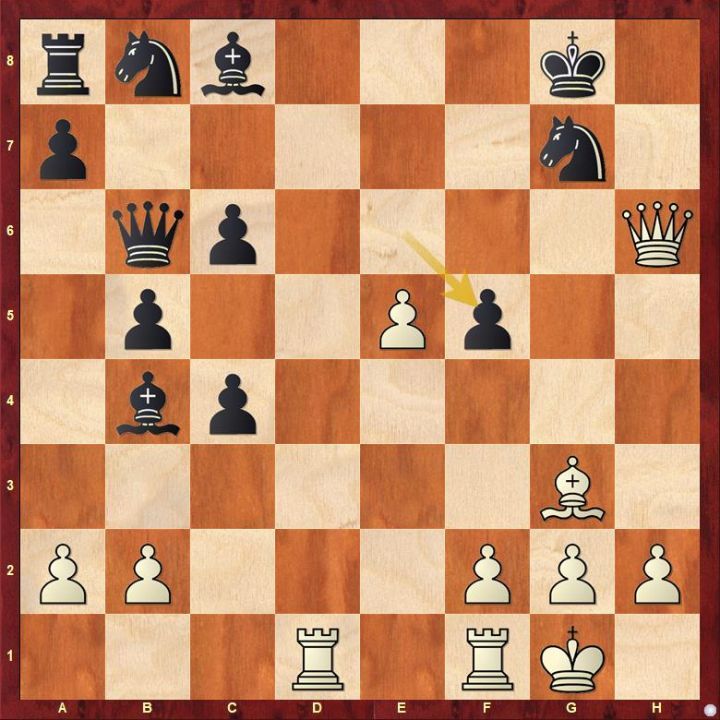 It is time for white to bring more pieces into the attack. How? 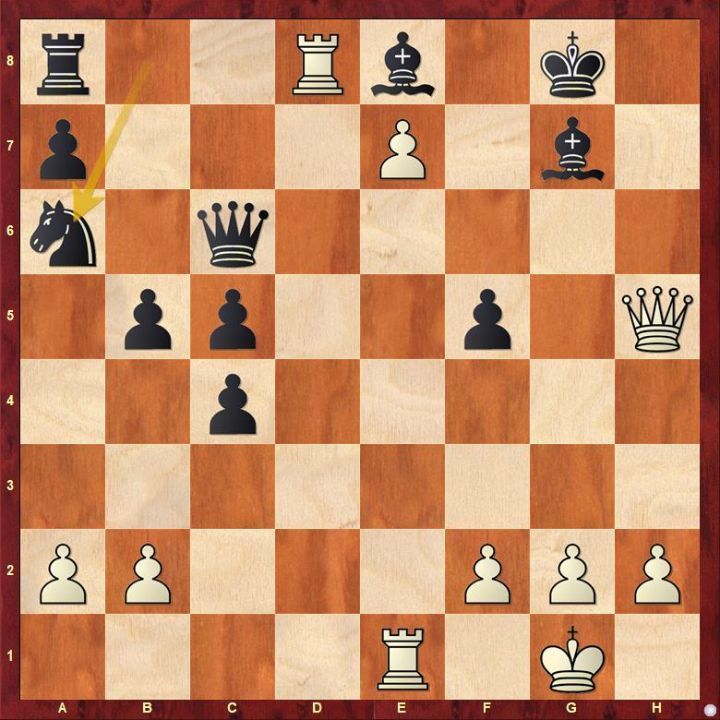 It seems like black has got everything under control after 28...Na6. Well that is far from the truth. Find out how should white continue the attack.

Giri scored his fourth consecutive victory of the tournament against Anton. 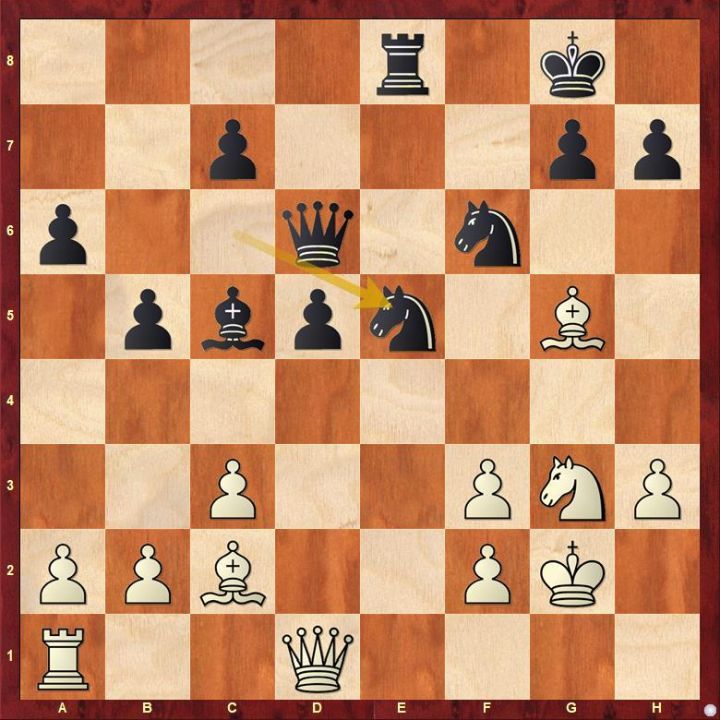 20...Ne5 may seem like an unassuming move but it only helps white. Find out the correct plan for white.

Karjakin scored his first victory of the event against Jorden after the latter misplayed in the endgame. 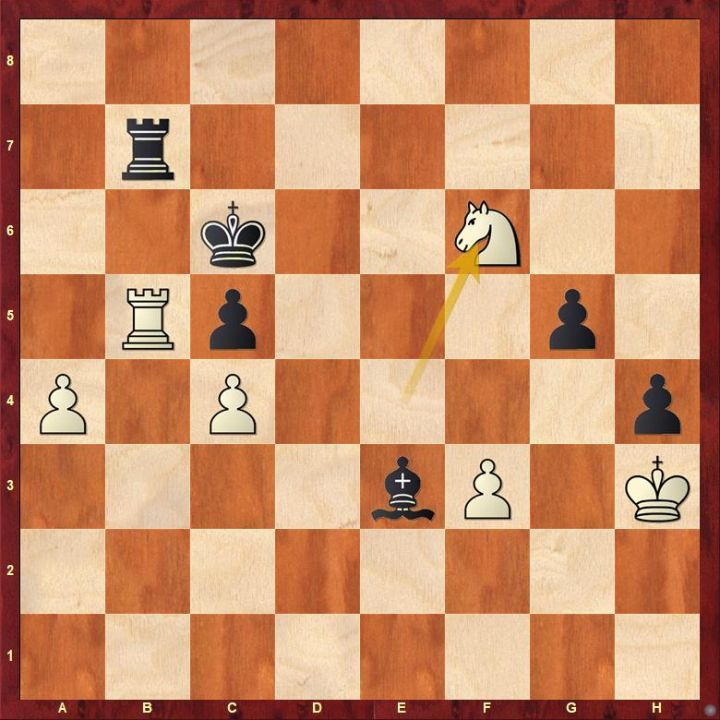 Black continued with 39...Rf7 which is a big mistake as white gets to push the passed a-pawn freely with 40.a5 and eventually it played a crucial role for white to score a victory. Instead 39...Bf4 would have been better as white cannot play a5 freely.

Grandelius made a solid draw with Carlsen.

Pichot was winning for the better part of the game against Dubov. However a mistake in the final moments of the game allowed Dubov to salvage a draw. 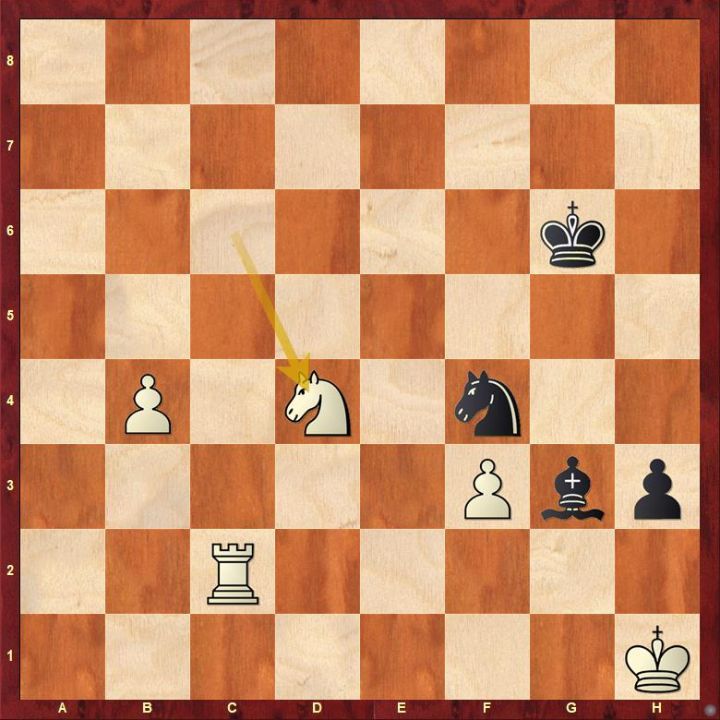 Giri was on a roll as Aronian first blundered a pawn and then an exchange. 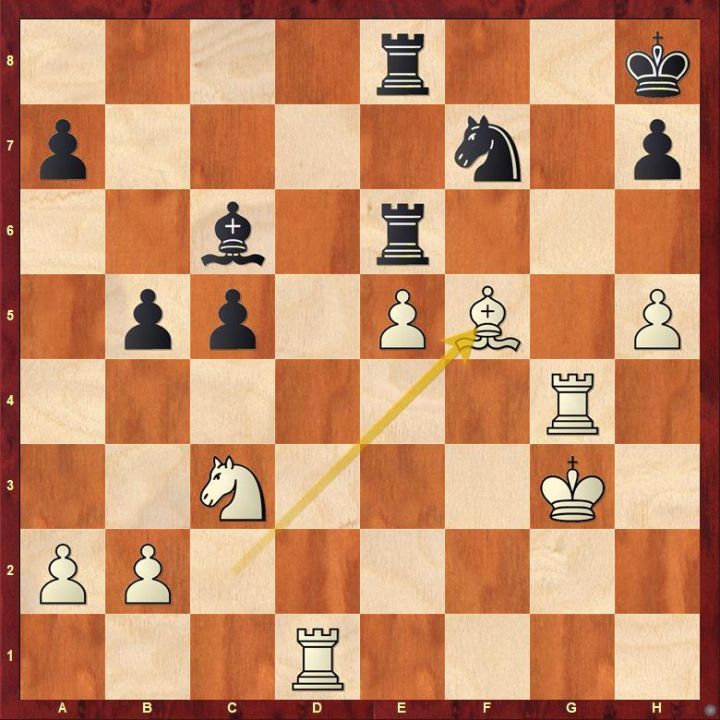 White shouldn't have lost the e-pawn for nothing and secondly 36.Bf5 only helps black.

In an already difficult position, Dubov gave a pawn to make matters worse for him against So. White was not losing the d4-pawn easily. 24.Re1 helped black.

Nakamura got back to his winning ways after making four consecutive draws. 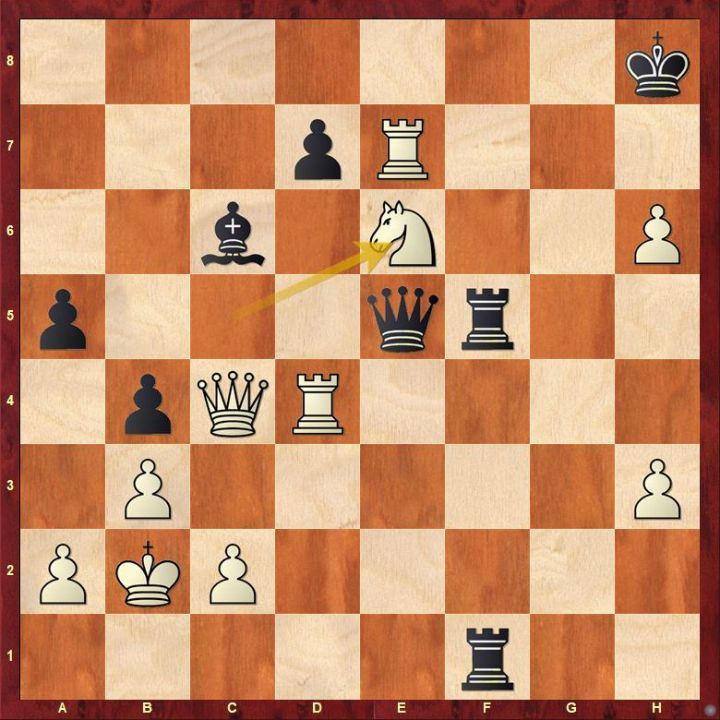 Should black take on e6 now or do something else? Pichot made the incorrect choice and lost the game in another five moves.

Radjabov in a completely winning position blundered and allowed his opponent to kamikaze his rook for a draw. 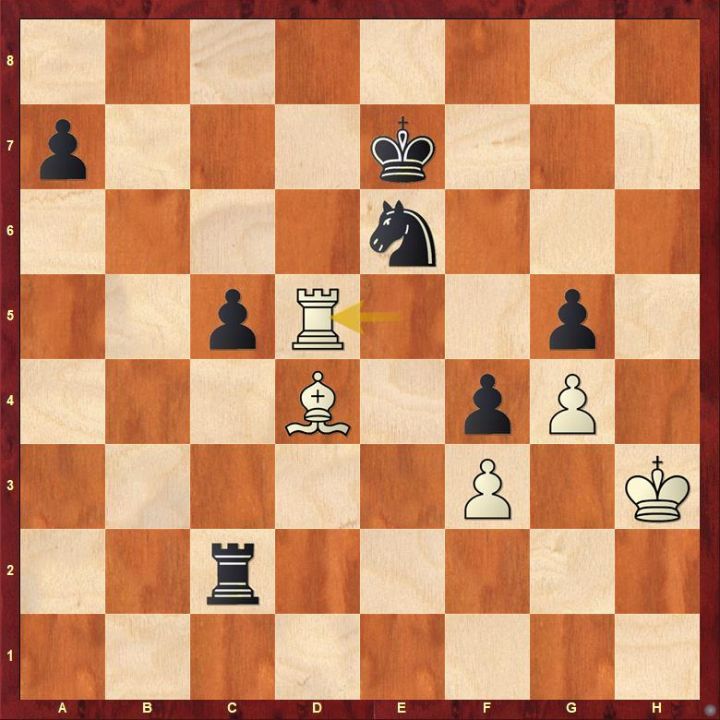 Can black take the bishop? Of course black can but then you have to find out a way to escape from white's check. Since the king at h3 has nowhere to go and white has no other possible move to make, white can afford to kamikaze the rook. However it is still winning for black. Unfortunately for Radjabov, he could not find it during the game.

Nepomniachtchi had advantage at one point but Firouzja managed to save his position and make a draw eventually.

Carlsen beat Mamedyarov with ease as he made a simple mistake which cost him the game.

Anton once again made a one-move blunder as he hung his bishop in an already difficult position.

Despite being better for the majority of the game, Giri was unable to convert his advantage and Grandelius held him to a draw.

Anton picked up his first win of the day against Mamedyarov after losing two consecutive games.

Carlsen played fantastic and scored a well-deserved victory against Nepomniachtchi. 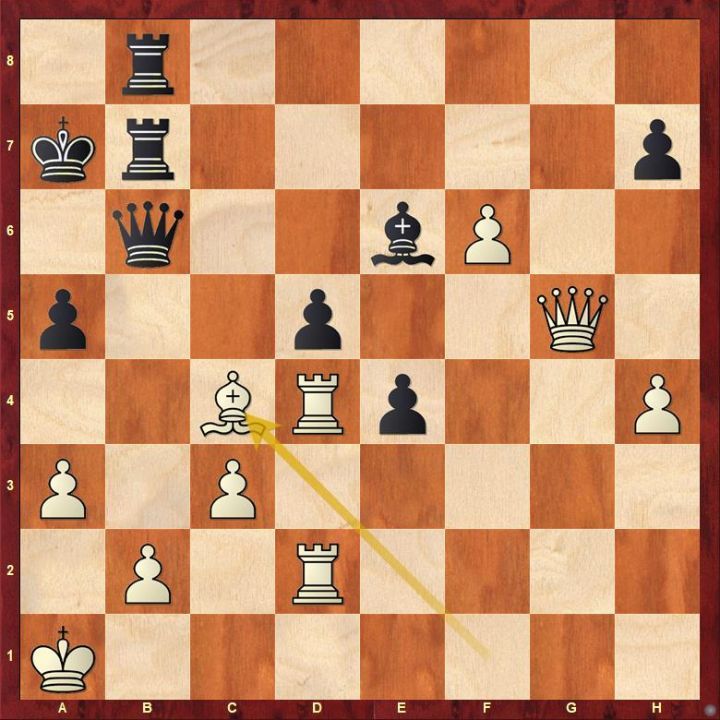 46.Bxc4 desperate sacrifice was a huge mistake in white's part. Instead 46.Bg2 would have kept the g-file blocked. Thus 46...Rg8 wouldn't have been as deadly as it was in the game.

Karjakin beat Firouzja after the latter made a huge positional mistake. 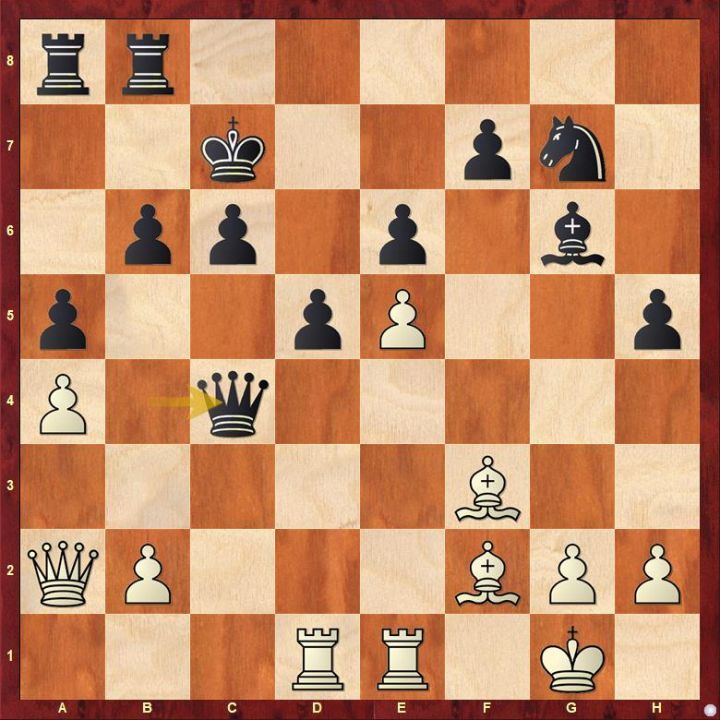 The last thing black needed to do was to exchange the most active piece and open up the d-file. Both bishops already looking towards the black king did not help Firouzja's case.

Radjabov missed a simple tactical idea which cost him material and the game against Vachier-Lagrave.

Giri had a good position against Dubov but he was unable to maintain it. 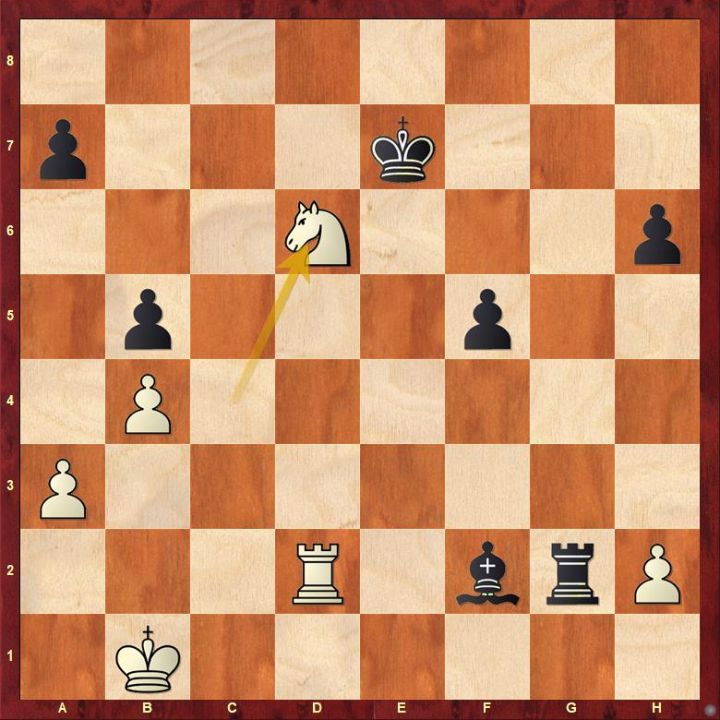 It is quite obvious that black should defend the f5-pawn to keep his winning chances alive. What is the best way to save the f5-pawn? Black exchanged the rooks soon and the game liquidated into a drawn king and pawn endgame.

Nakamura scored a comfortable victory over Aronian in just 30 moves.

Jorden made a simple tactical error which cost him an exchange and eventually the game against So.

Vachier-Lagrave scored a comfortable victory over Pichot after the latter's exchange sacrifice did not yield anything substantial.

Firouzja beat Radjabov in his own King's Indian Defence after the latter misjudged his opponent's relentless attack. 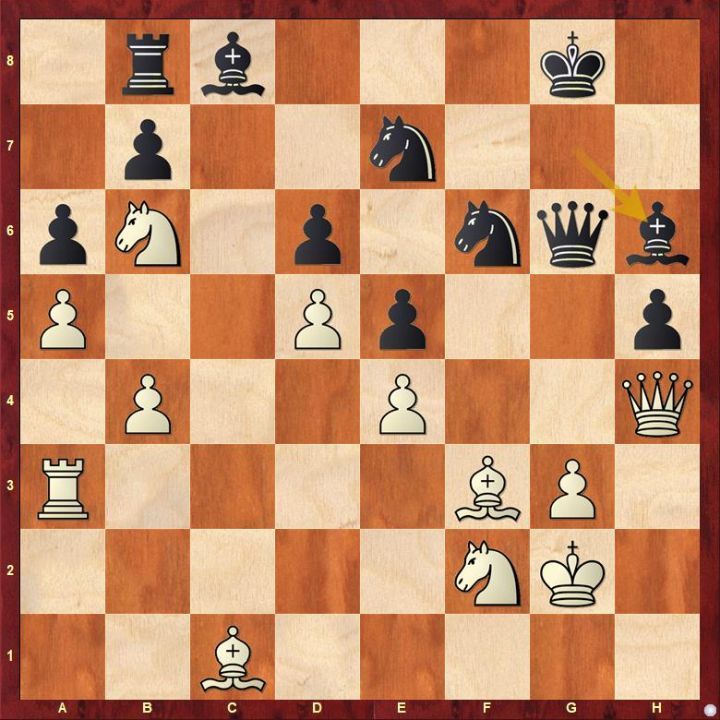 Anton got a fantastic position against Nepomniachtchi but he could not capitalize on it. 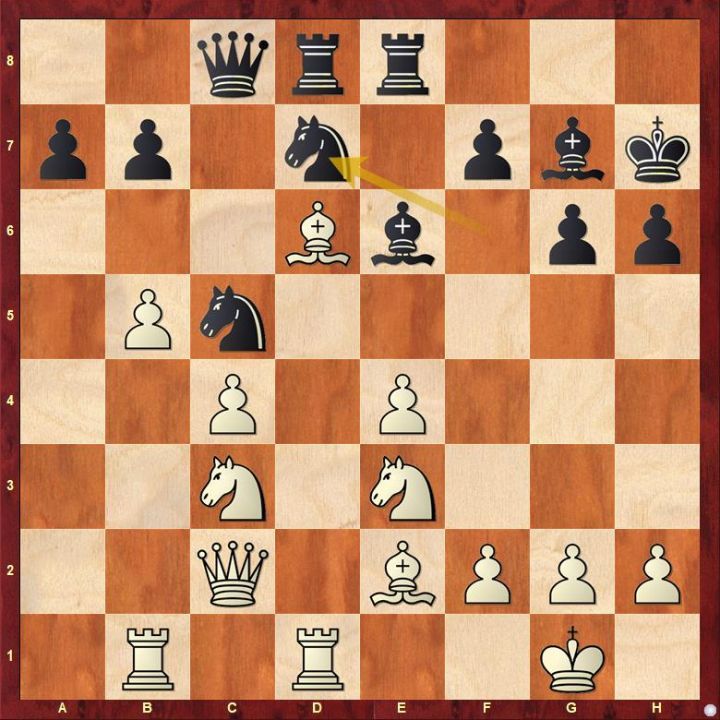 Losing from a fantastic position like this may cause one to lose their sleep. White just needed to play on his advantage. 25.Ned5 or Ncd5 is definitely a step in the right direction. White did everything he should not have done and lost both valuable e and f-pawn and eventually the game.

Mamedyarov ended his three-game losing streak and scored his first win of the day comfortably against Grandelius.

Mamedyarov's woes continued as he lost his fourth game of the day and Giri picked up his sixth win of the event. 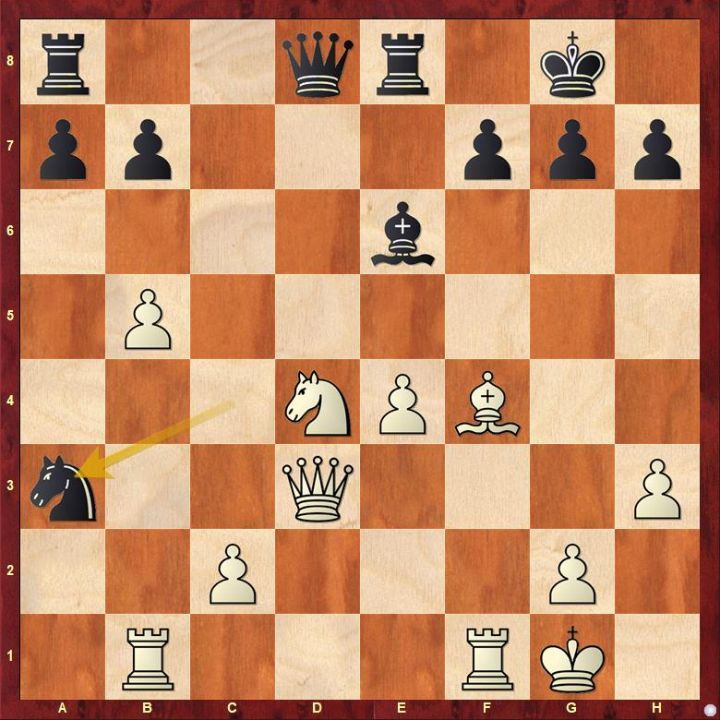 20...Nxa3 is a blunder as it does not recover the pawn for black, instead it drops a piece. Giri picked black's bishop and knight for his rook with 21.Rb4 and won the game comfortably.

Karjakin scored a fine victory over Anton with a beautiful display of technique in the endgame.

Radjabov-Carlsen was an uneventful draw.

Jorden was completely winning against Aronian but he squandered his opportunity and blundered into a checkmate. 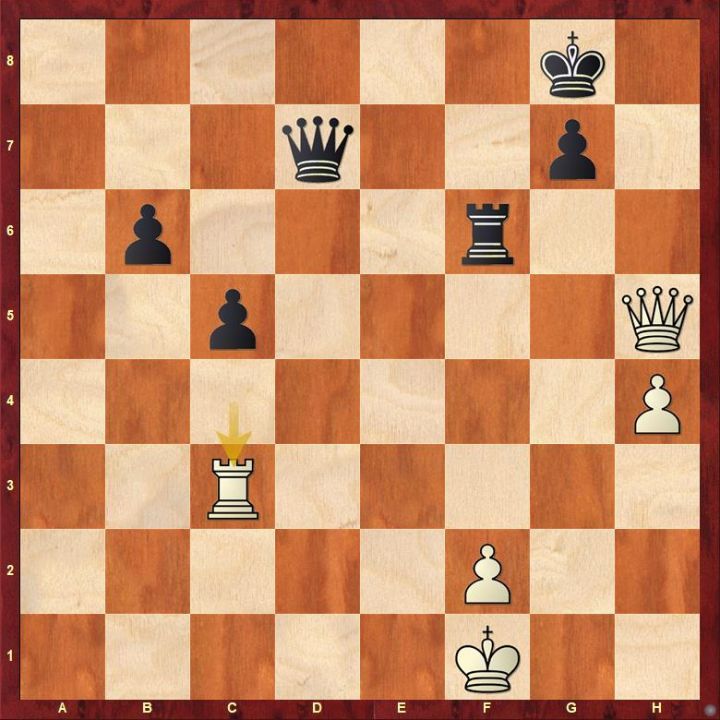 One of the best chance black had in the endgame was after 50.Rc3. Find out the best continuation for black here. The game went on with 50...Qf5 which was not the best idea.

Giri is still in the sole lead with 8.0/10 | Photo: Champions Chess Tour