Jorden van Foreest was unable to continue his momentum from the previous day in the second set of Meltwater Champions Chess Tour Chessable Masters Quarterfinals. So avenged his loss by beating Jorden in consecutive games before making a draw to eliminate him from the tournament. Former World Blitz champion Liem beat Firouzja in both games to advance to the Semifinals for the very first time. Aronian beat Mamedyarov by 2-1 to set up a clash with Liem in the Semis. Artemiev-Nakamura had the most evenly matched duel of the day as their match went to Armageddon, which was won by Artemiev. He will face So in the Semifinals today, which starts at 8:30 p.m. IST. Photo: Lennart Ootes/Grand Chess Tour

Both Firouzja and Mamedyarov could not make a comeback in the second set of the Quarterfinals. While Mamedyarov won one game, Firouzja could not even move the scoreboard for him. Jorden van Foreest was not allowed any chances by the Fischer Random Official World Champion Wesley So. 12 out of 15 games were decisive, only three games ended in draws which means a staggering 80% games were decisive. 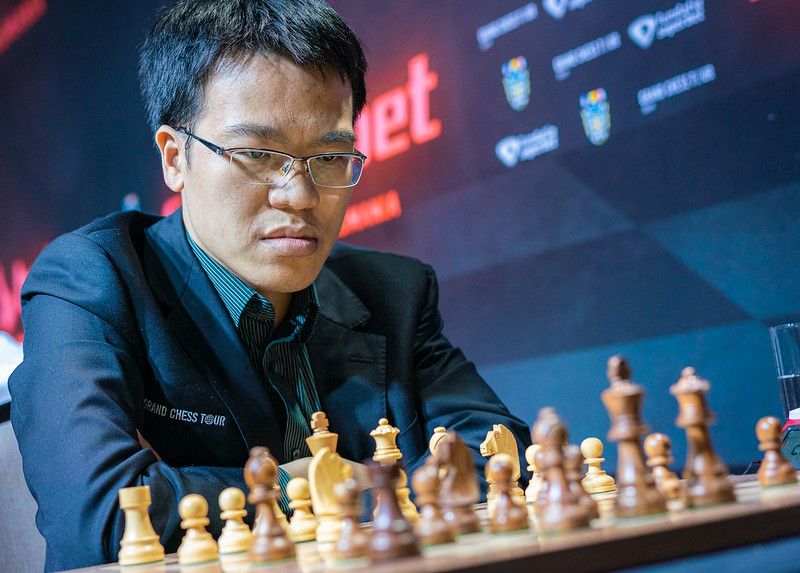 Jorden and So continued with where they left off on the previous day. Their first game of the second set was a wild one. 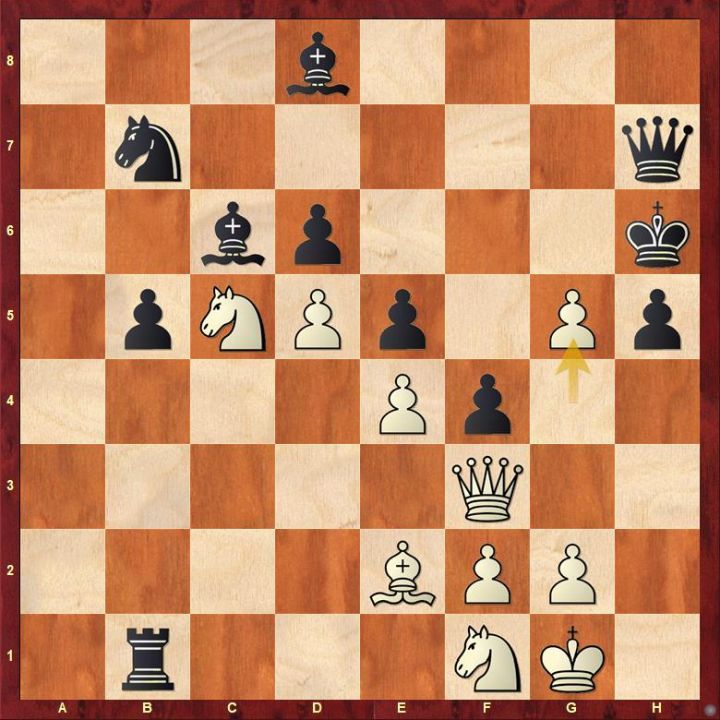 A lot of things are going in the position. 35.g5+ is exactly what White needed to do in an already complex position. The game continued 35...Kxg5 36.Ne6+ Kf6 and now White went wrong. Find out the best continuation. It is undoubtedly a difficult position to play, especially when you are in a time scramble. So gained a 1-0 lead.

Jorden made a simple tactical inaccuracy early in the middlegame. 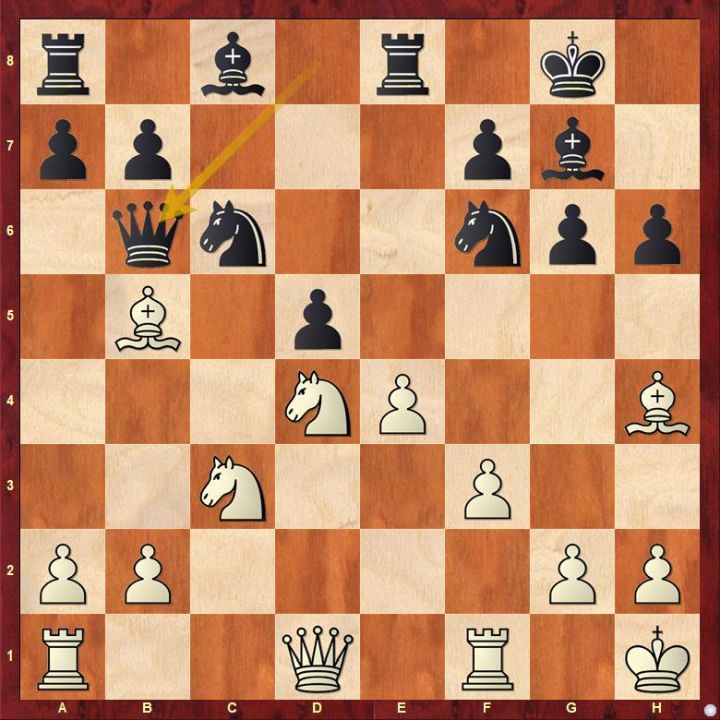 The third game ended in a draw. Thus, So won the third set 2.5-0.5 and advanced to the Semifinals.

Unlike the previous day, Artemiev-Nakamura had a lot of decisive games. The Russian completely dominated the first game. Only in the final moments of the endgame, Nakamura got a small chance to save the game. 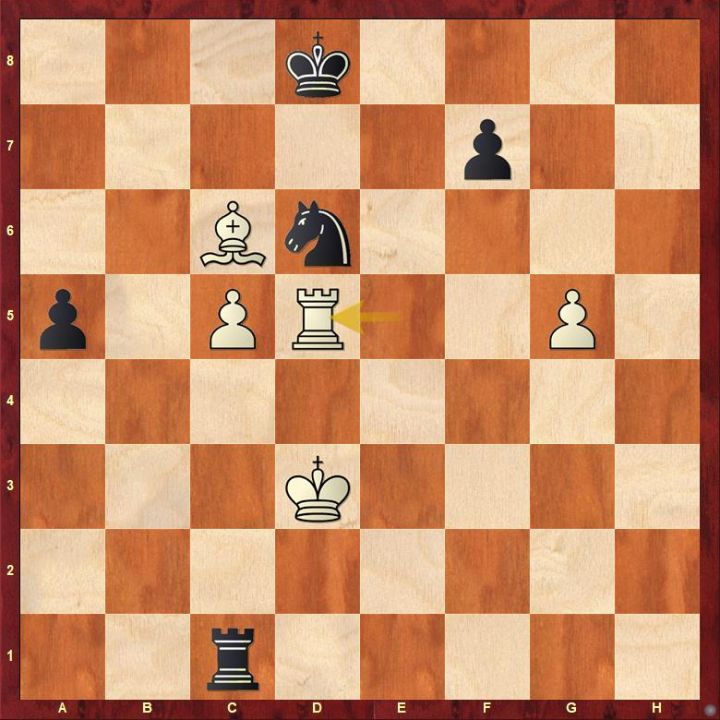 The d6-knight is a lost cause, however that is not the case for the game for Black. How could have Black saved the game in the above position?

Nakamura struck back immediately in the second game as Artemiev wasted a lot of time to rearrange his pieces which allowed Nakamura to create a passed pawn. 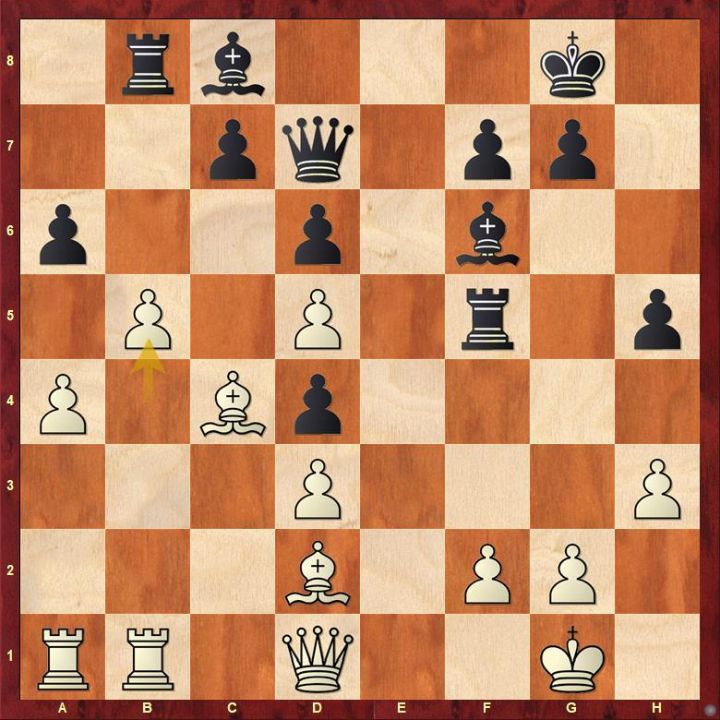 Black's position is already worse, taking on b5 did no good. Nakamura went on to win the game and the score became 1-1.

Third and fourth game ended in draws. The second set also got tied at 2-2. Tie-breaks were enforced. Artemiev won the first Blitz tie-break which means Nakamura was in a must-win situation.

Nakamura won the second blitz game as Artemiev trapped his own rook. 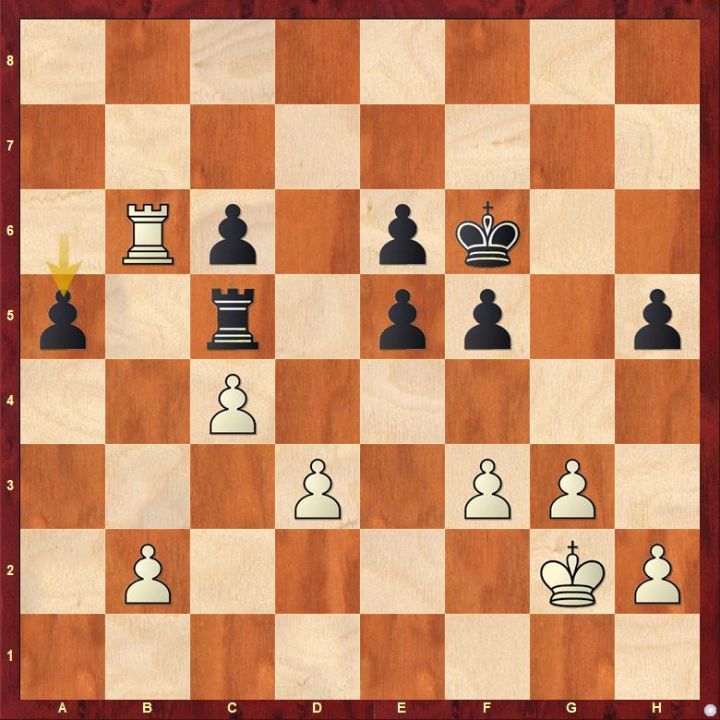 Find out the correct plan for White to take advantage of Black's trapped rook at c5. Since Blitz also got tied 1-1, thus Armageddon was enforced.

Artemiev won the Armageddon and thus advanced to the Semifinals where he will face So.

Liem was in complete control in the first game till Firouzja equalized. 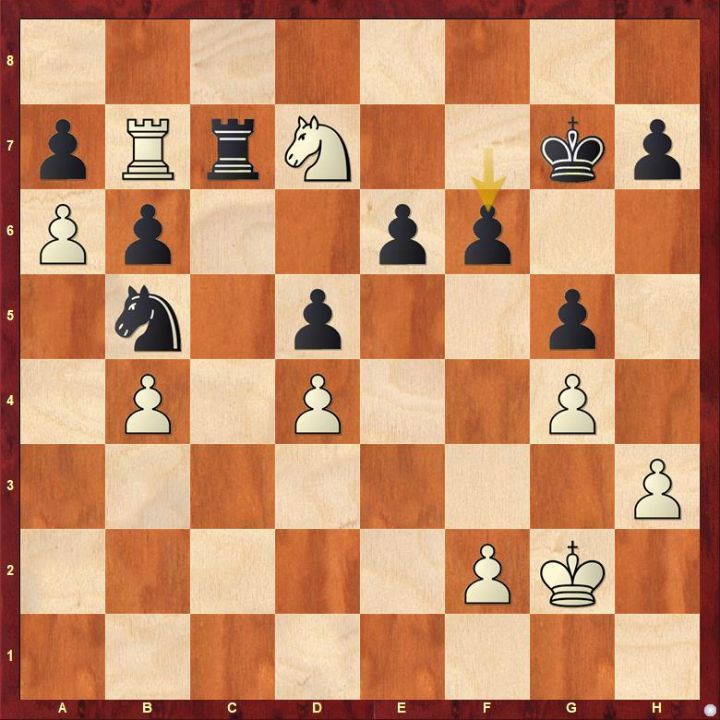 Find out why 37...f6 is a blunder and what Black could have done instead.

Firouzja's uncharacteristic passive play did not help his case. 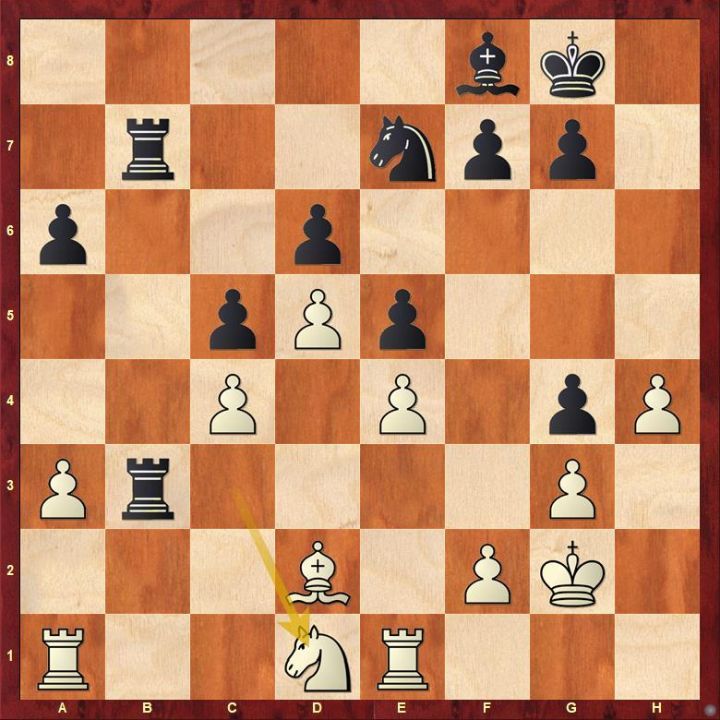 White needed to trade the rooks to reduce the battery along the b-file. 33.Rab1 would have been fine but 33.Nd1 was not such a good idea. Black won the game eventually, thus Firouzja lost the second set 0-2 and got eliminated. 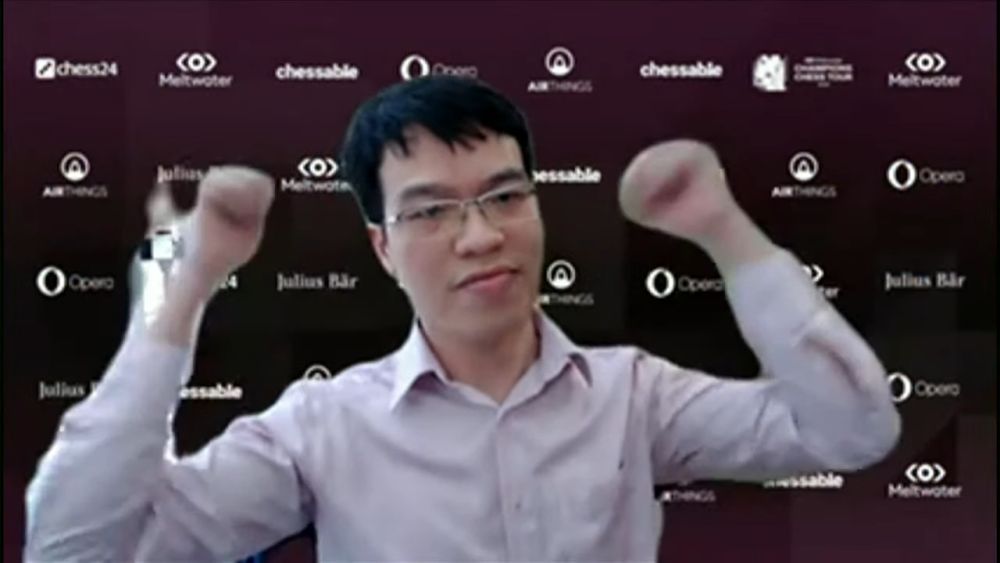 Mamedyarov got himself a very good position in the first game. 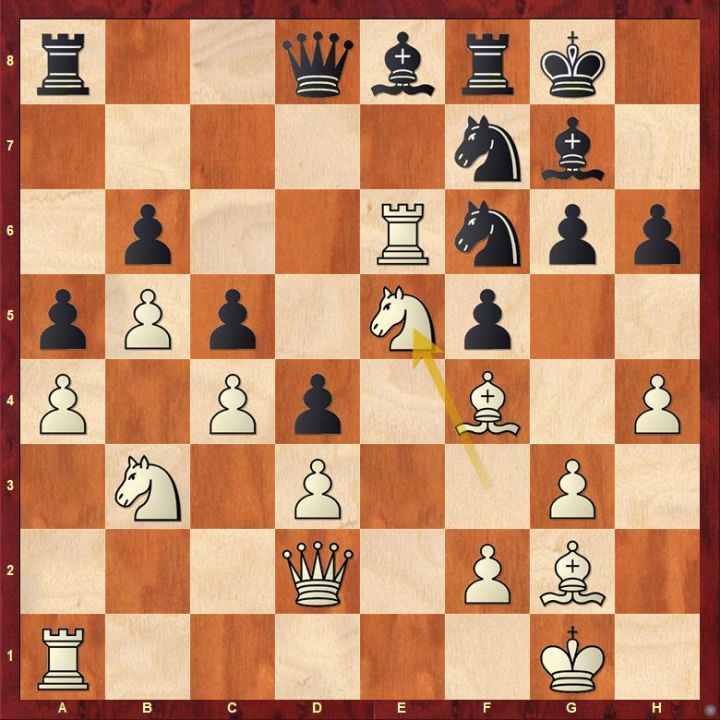 23.Ne5 is a double attack on both a8-rook and the g6-pawn. It is difficult to imagine that Black can escape from this position. Eventually, Aronian got the counterplay he was looking for. 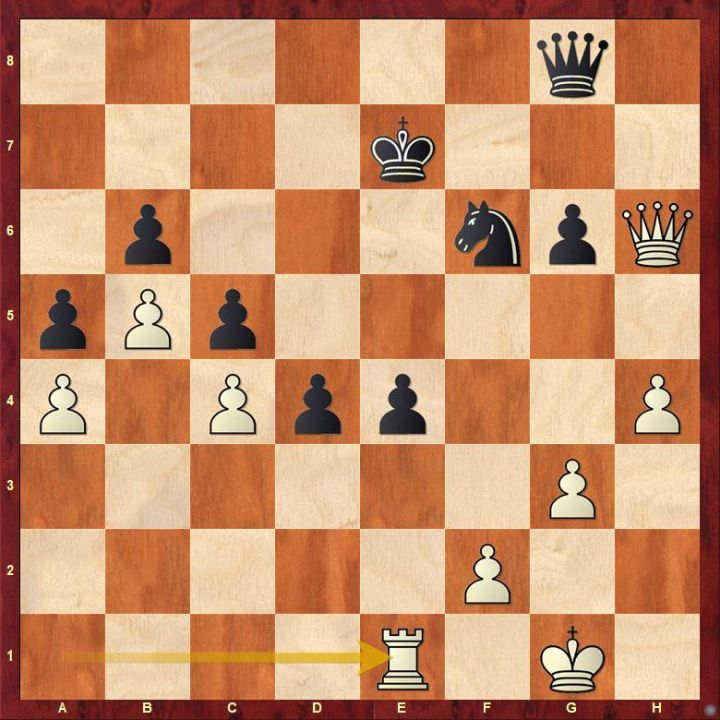 White needed to play 38.Rc1 and protect the c4-pawn which also prevents Black's counterplay. 38.Re1 allowed 38...Qxc4 and Black won the game in another nine moves. as the connected c, d and e-pawns became menacing. Aronian gained a 0-1 lead.

Mamedyarov immediately struck back in the second game to level the score 1-1. 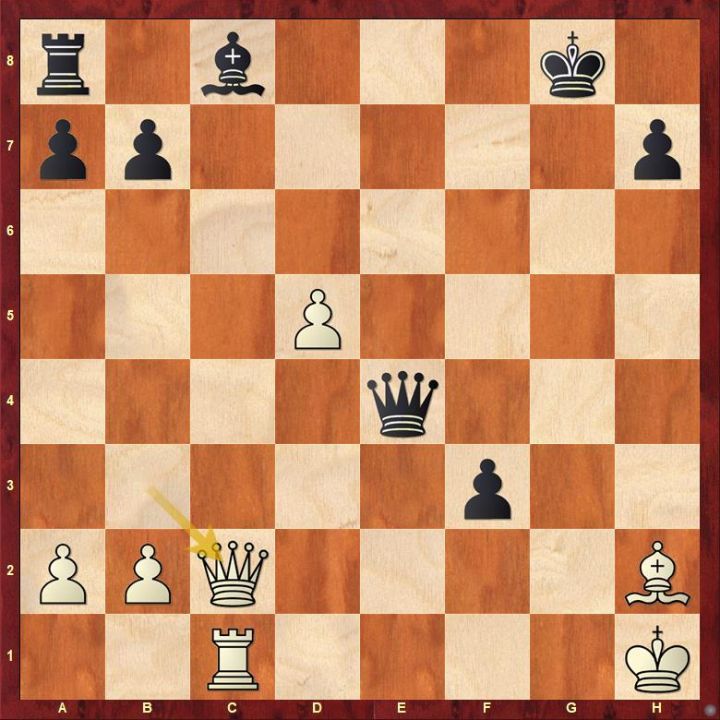 32.Qc2 caused White to lose control over an important b3-g8 diagonal. Thus, 32.Qc4 instead would have been a much better choice. Mamedyarov eventually won the wild game.

In the third game, Mamedyarov's tactics backfired as Aronian had a trick up his sleeve. 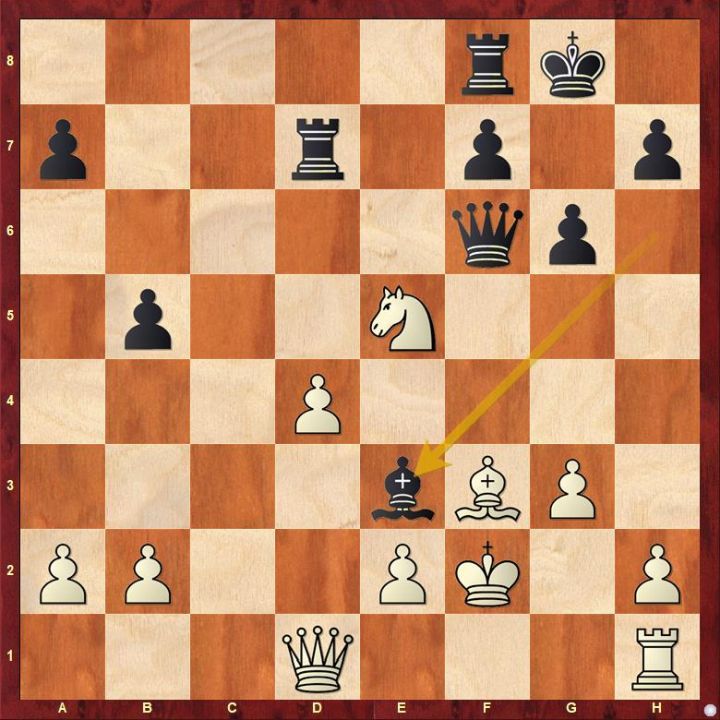 21...Bxe3+ is a beautiful bishop sacrifice one if declined, makes things worse for White. So 22.Kxe3 Re8 23.Kf2 Rxe5 24.dxe5 Qb6+ 25.Kg2 Rxd1 and the resultant endgame is winning for Black. Mamedyarov did not go down easily but he eventually lost the game and the set 1-2 to get eliminated which means Aronian secured his place in the Semifinals. 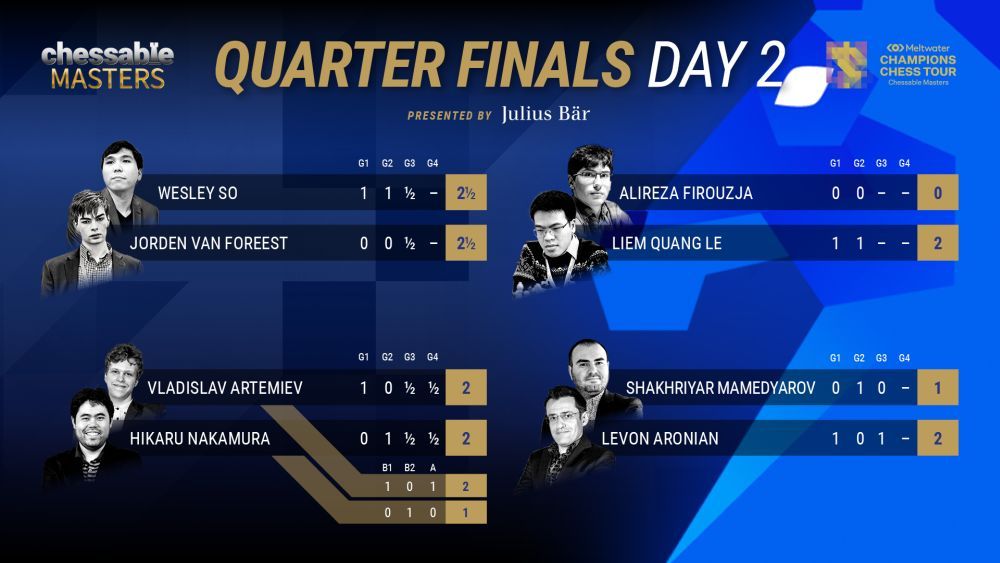 Artemiev-Nakamura went down to the wire | Photo: Champions Chess Tour