Nepomniachtchi, So and Nakamura defied all odds and won against their respective opponents to advance to the Semi-Finals of Champions Chess Tour Skilling Open. All three needed to win the Rapid mini-matches on the second day of the Quarter-Finals and they did. Nakamura did it in a brilliant fashion as he just won in three matches against Vachier-Lagrave. So drew with Radjabov in the Armageddon in a completely winning position as draw was enough for him to advance. Nepomniachtchi completely dominated Aronian in Blitz. Giri drew all four games in the Rapid to get eliminated by Carlsen. Semi-Finals starts tonight from 10:30 p.m. IST. Who do you think will win the first mini-match between Carlsen-Nepomniachtchi and So-Nakamura? Photo: chess24 India live stream

All four Rapid games between Carlsen and Giri ended up in draws. Thus Carlsen advanced to the Semi-Finals and Giri got eliminated. Nepomniachtchi was determined to make a comeback, if you followed his ig story on the previous day then you definitely know this. He truly played some inspired chess and Aronian's blunders and inaccuracies only accentuated the Russian's dominance. Nepomniachtchi won the Rapid 3-1 to force tie-breaks which he won straight 2-0. So won the second Rapid game and drew the rest to force tie-breaks. When there was no decisive result in Blitz, Armageddon was forced where Radjabov blundered but So repeated moves as it was enough to advance to the Semi-Finals. Nakamura smashed the Rapid portion by winning it with 2.5-0.5 forcing tie-breaks. Despite losing the first Blitz game and being on the brink of losing the second one too, the Speed King made an epic comeback to win the game and force an Armageddon. He chose black and made a comfortable draw to set a clash with his compatriot So in the Semi-Finals.

The first game between Carlsen and Giri was a well fought draw. 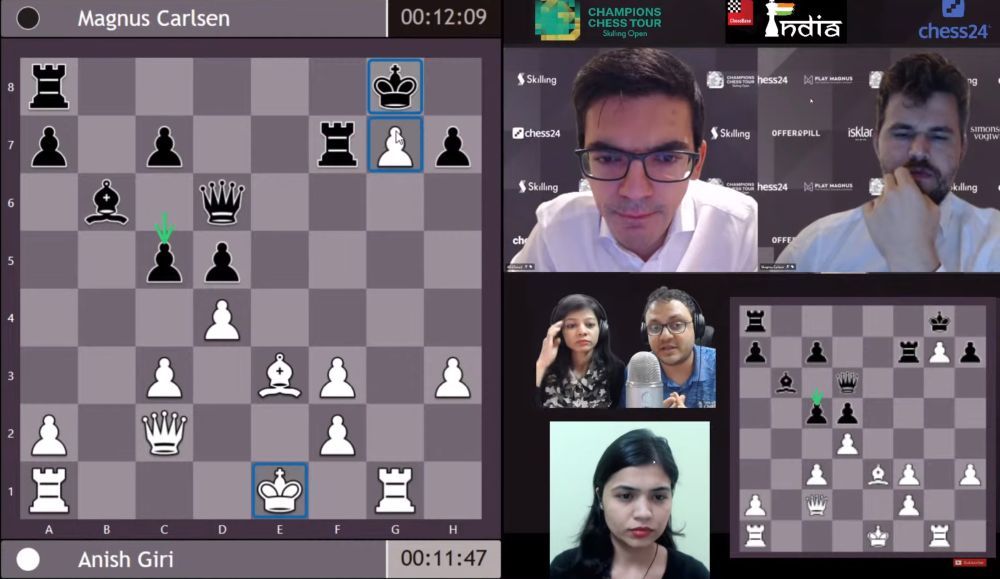 Although white is ahead by two pawns and it might seem like black's king is slightly weaker, practically there isn't much for white to go on.

Giri defended very well against Carlsen in a difficult position and found very good resource to save the second game. 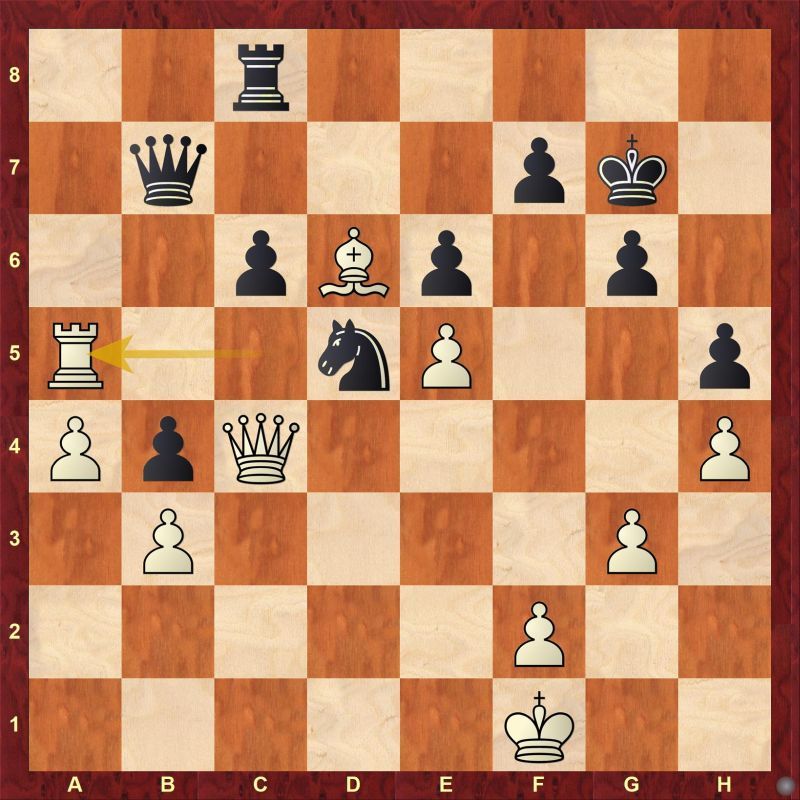 Black's major pieces are crammed up on the queenside and white is about to crush. What resource black needs to find here to have some semblance of saving the day?

The third game was an uneventful draw. The fourth game was also a lukewarm draw which allowed Carlsen to advance to the Semi-Finals and Giri got eliminated.

Aronian went wrong early in the middle game against Nepomniachtchi as the Russian got his pieces placed well and capitalized on the development advantage too. 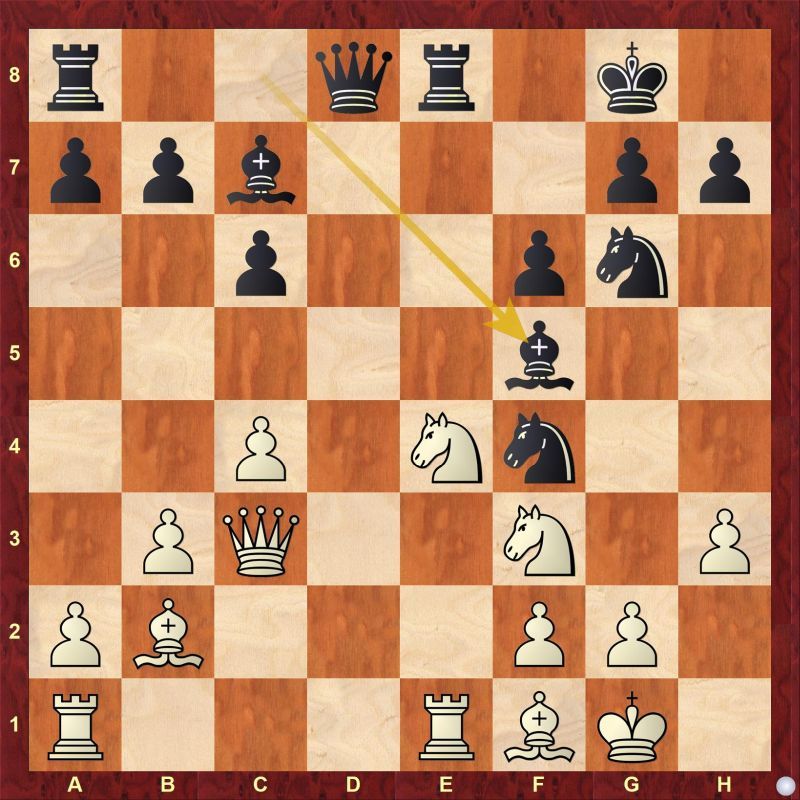 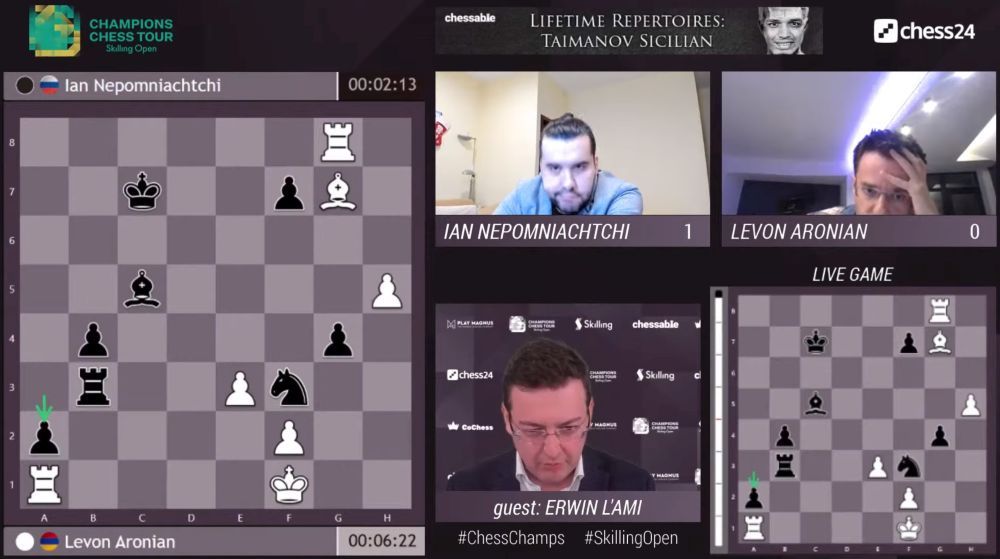 The third Rapid game was a short and strange draw.

Nepomniachtchi played some in a very aggressive and determined way, a Nepo we haven't seen in a long time to win the fourth game and force tie-breaks. 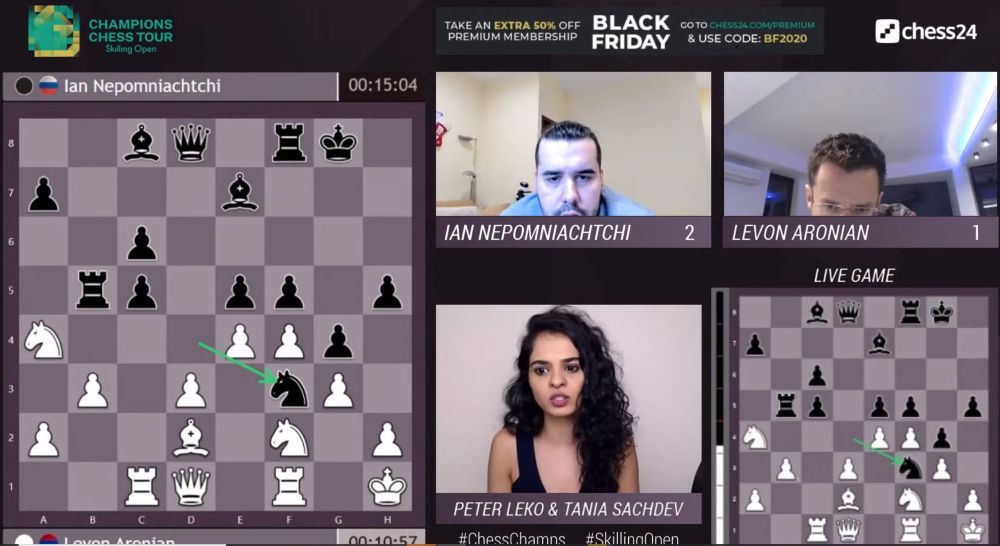 It is quite obvious that the menacing knight at f3 played a key role in black scoring an important victory.

Just when it seemed like the first Blitz game will end up in a draw, Aronian had a momentary blind spot and hanged his queen. Nepomniachtchi did not even notice it. Aronian blundered again and this Nepomniachtchi snatched the win. Aronian opting for the dubious Hippopotamus Defence in the first Blitz game against Nepomniachtchi might have been not so good idea. 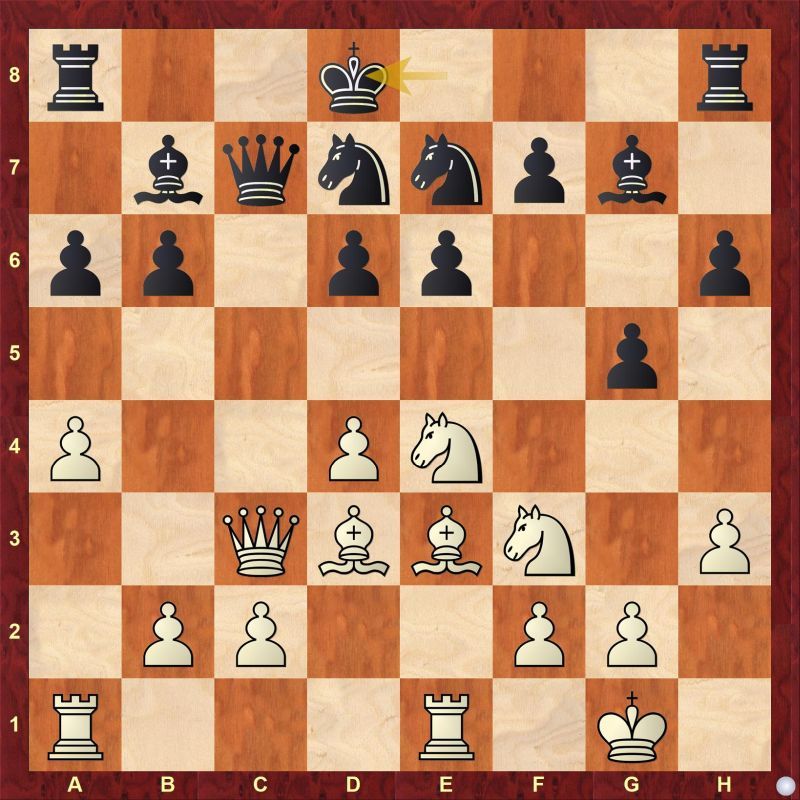 The innocuous 16...Kd8 was uncalled for. The strange displacement of king only shifted the momentum towards white's favor. 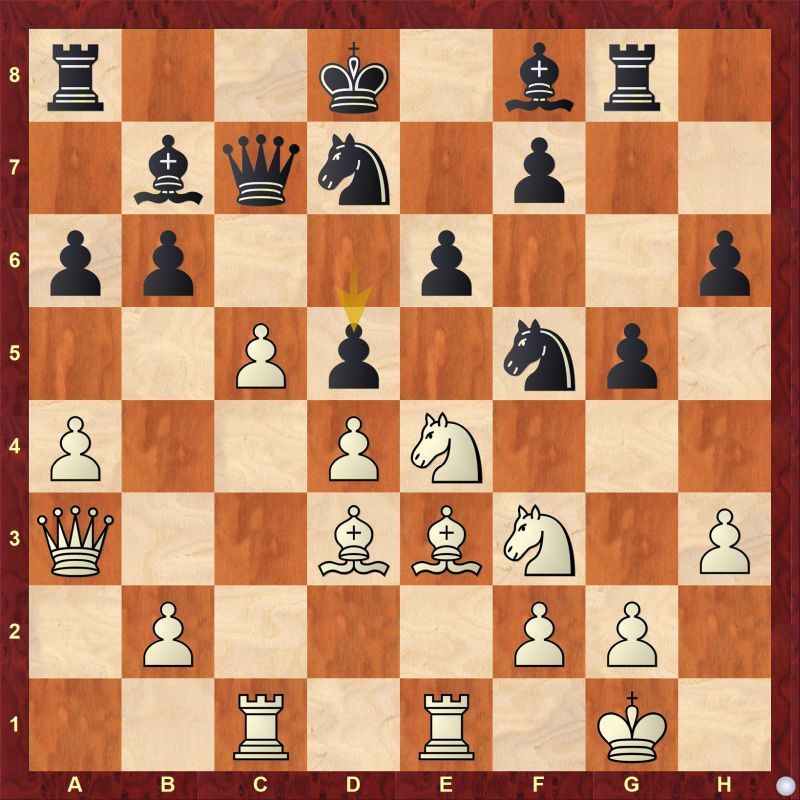 It was all over for black after 20...d5. Find out the best continuation for white.

The first Rapid game between Radjabov and So was an uneventful draw. In the second game, Radjabov went for an incorrect break at the center of the board which gave So a decent advantage. 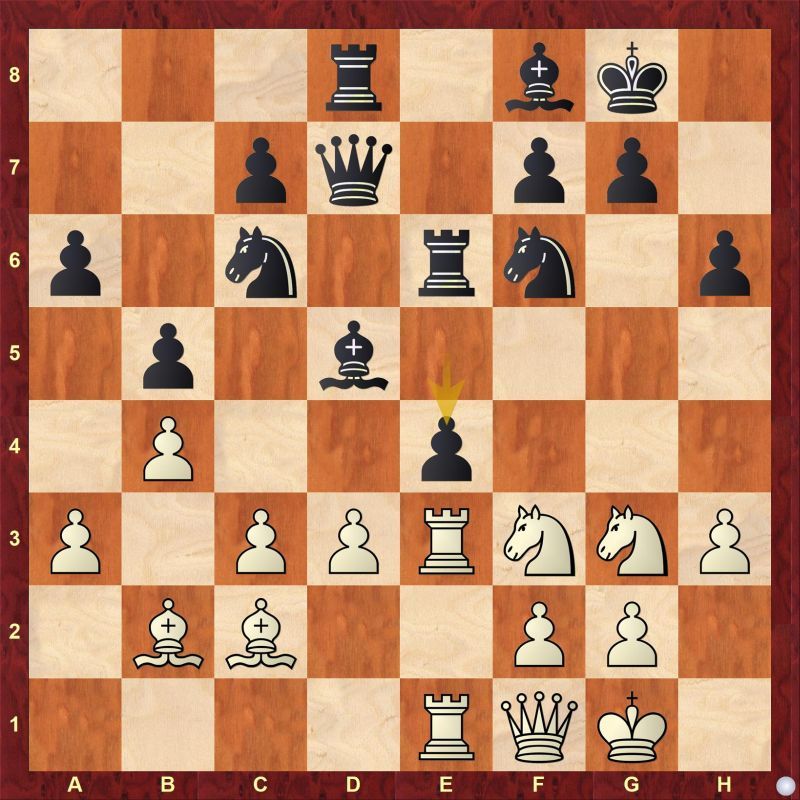 21...e4 is an unnecessary break for black. If anyone benefits from it then it has to be white because of the ill fated bishop on d5. 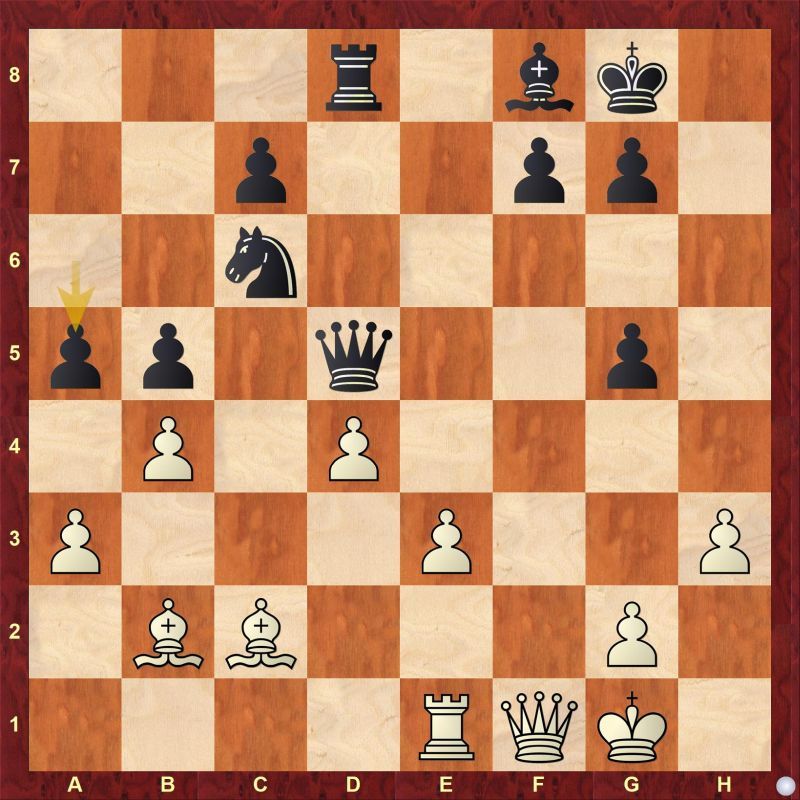 Black's kingside is extremely vulnerable. 27...a5 doesn't help black's situation. How should white capitalize on it? 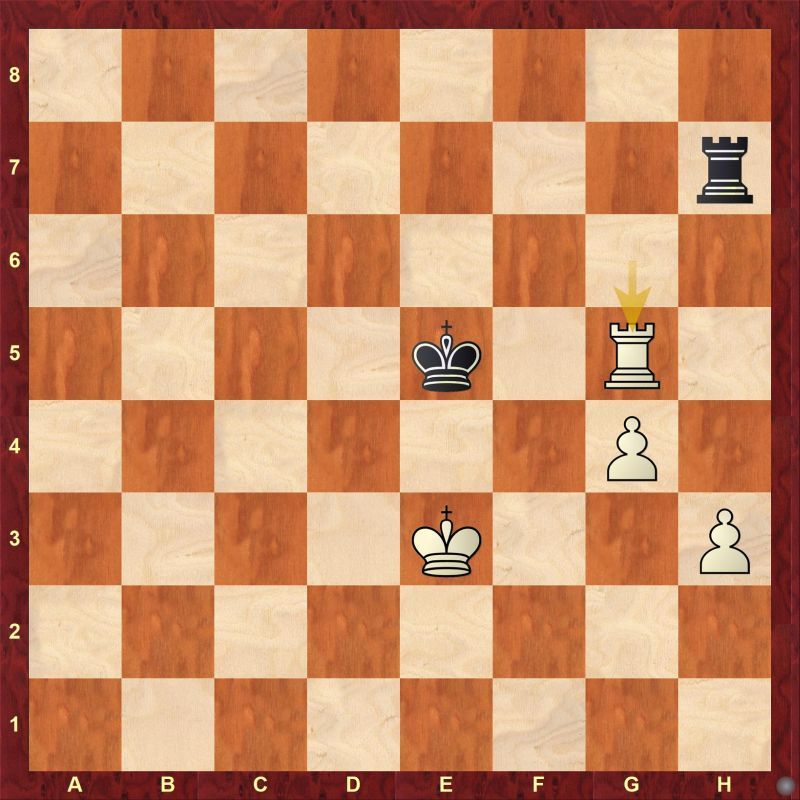 Despite everything that happened throughout the game, it was not over for black until the last moment. Black can still save the game after 55.Rxg5+. How?

The third Rapid game was a short 15-move draw. In the fourth Rapid game, at one point it seemed like So has a substantial advantage but the game eventually petered out to a draw. A draw was sufficient for So to force the tie-breaks. 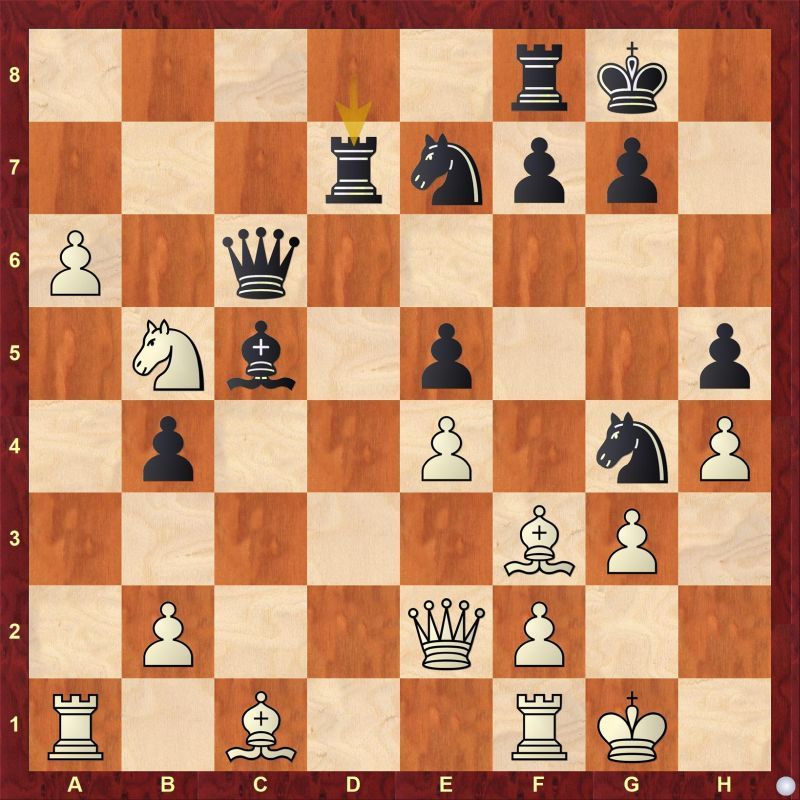 The game went on with 30.Bg5. So played it safe and it was enough to make a draw.

The first Blitz game was a prolonged 95-move draw. The second Blitz was a tepid draw. Thus the tie-breaker moved to Armageddon. 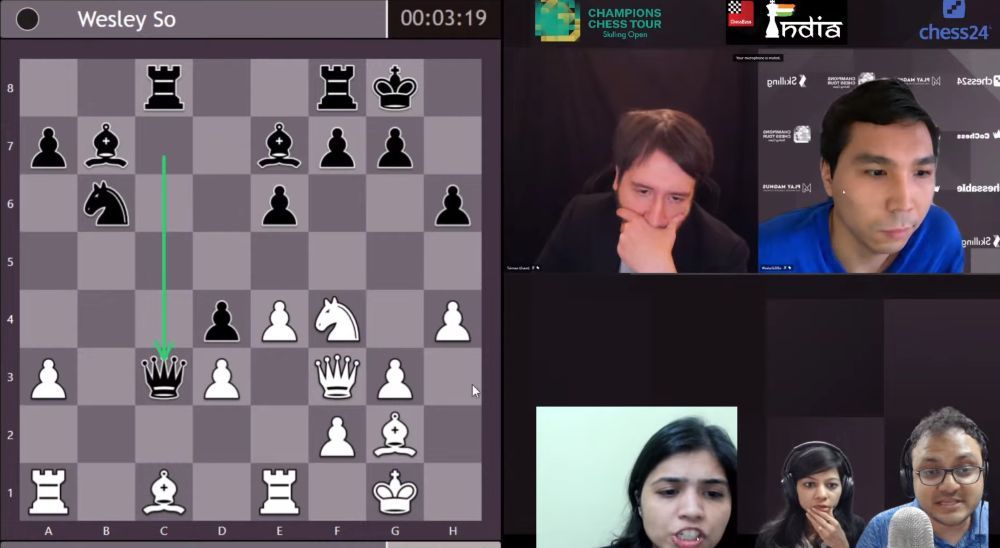 Radjabov blundered a complete piece when he played 22.Qxf3. He was completely lost but So repeated moves as draw was enough for So to advance to the Semi-Finals as per Armageddon rules.

Vachier-Lagrave played the first Rapid game in a bizarre way, he tried to recover the lost pawn in an unusual way and then gave up one pawn too many which turned things completely into Nakamura's favor. 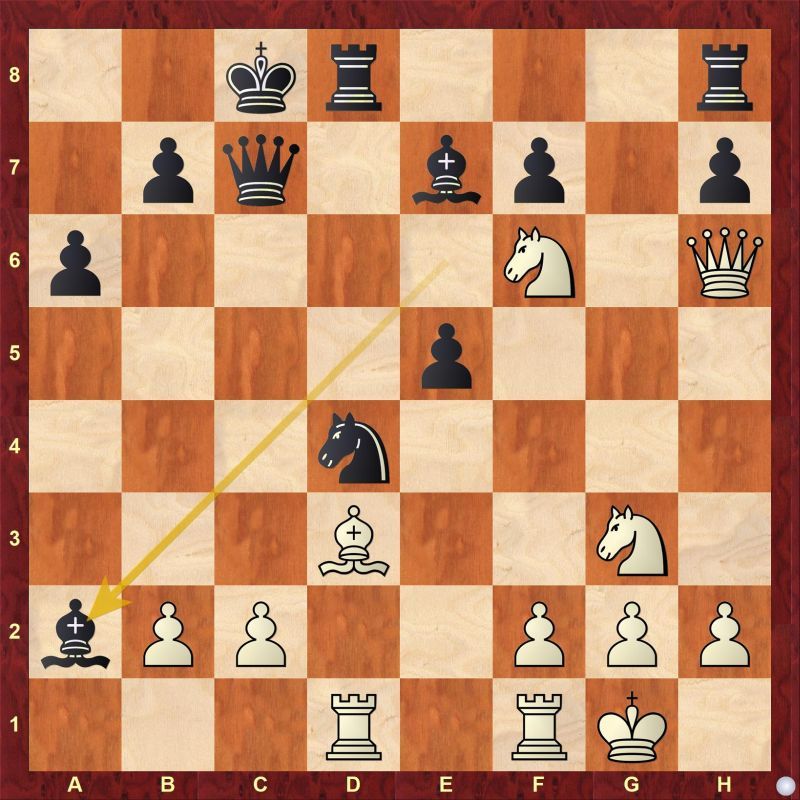 16...Bxa2 seems to be a really strange move. If anyone is in firm control of the position then that has to be white.

The second Rapid game between Vachier-Lagrave and Nakamura was a solid draw.

Nakamura scored the second victory of the day in the third Rapid game to force tie-breaks. 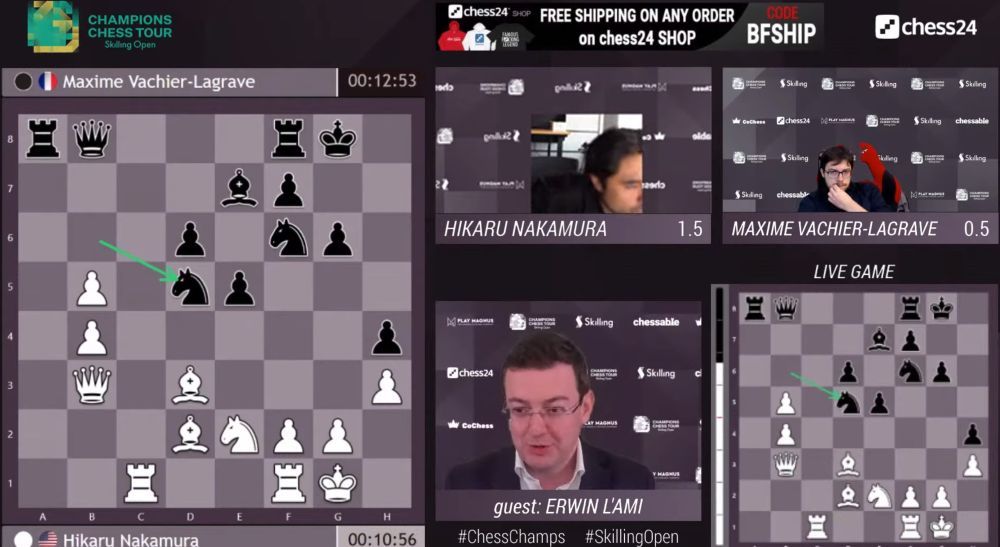 In an already difficult position, black captured a poison pawn with 25...Nbxd5. He had to pay the price by giving up an exchange and eventually the game.

In a rare moment of miscalculation, Nakamura blundered in the first Blitz game and Vachier-Lagrave capitalized on it to take a lead.

White is threatening on f7. Find out the best defence for black after 37.Rf3

Nakamura dug deep and got himself out of a difficult position in a must-win situation in the second Blitz game to force Armageddon.

Vachier-Lagrave dropped guard and allowed Nakamura to have counter-play. 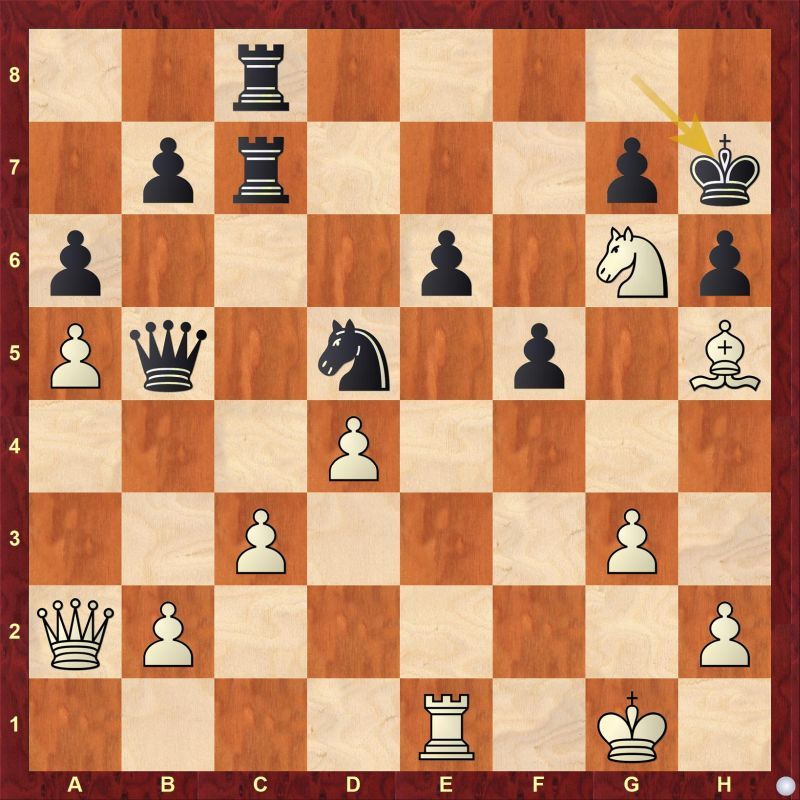 Nakamura captured the e6-pawn with his rook on the second opportunity. Eventually the French no.1 blundered to piece to resign the game, thus Armageddon was required.

Nakamura opted for Black in the Armageddon as a draw is sufficient enough for him to advance as per the Armageddon rules. We all know that one-minute deficit even without increment is not a big factor for the Speed King. 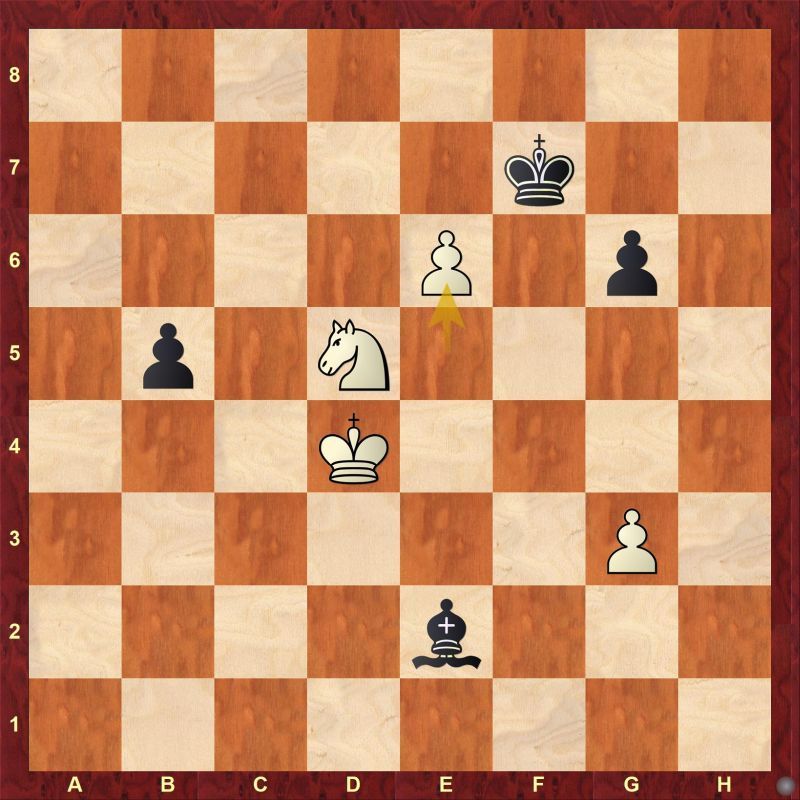 Can black take on e6? Nakamura made a comfortable draw and advanced to the Semi-Finals.

Replay all Quarter-Final games from Day 2

Nepomniachtchi, So and Nakamura turned things around | Photo: chess24