Anish Giri brought his momentum to a halt as he started the third day of Meltwater Champions Chess Tour Prelims with a draw against Nakamura. He lost the next game against Nepomniachtchi. Thus he finished the prelims with 10.0/15. Carlsen beat Pichot to start his day and drew the remaining four games to top the table with 10.5/15. Carlsen will face Aronian, Nepomniachtchi against Nakamura, So vs Firouzja and Giri vs Vachier-Lagrave are the matches for Quarter-Finals. Catch the Quarter-Finals tonight on ChessBase India youtube channel from 9:30 p.m. IST with live commentary by IM Sagar Shah and Amruta Mokal. Photo: chess24 live stream

Dawn of the dreadful draws

The third day of Meltwater Champions Chess Tour Magnus Carlsen Invitational witnessed a plethora of draws. Three games ended up in the same 14-move draw in Berlin and there were three more which was just an extension of the 14-move draw which finished in 24 moves. Of course each set having the same moves. Total 26 out of 40 games ended up in draws which is a staggering 65% draws. The shortest draw being a six-mover. 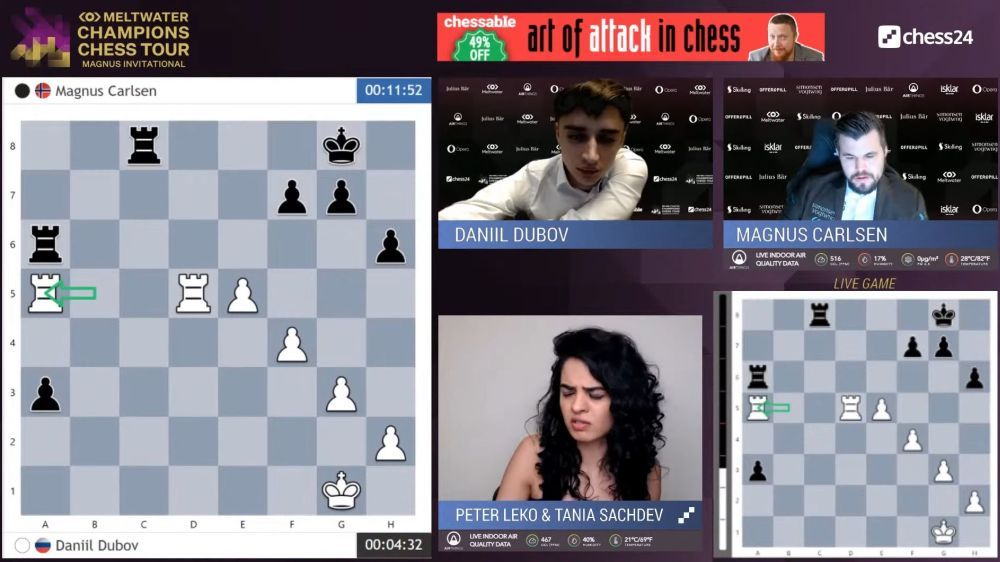 Carlsen did not have the best day in the rook endgame | Photo: chess24 live stream

Dubov made a dubious sacrifice early in the opening. 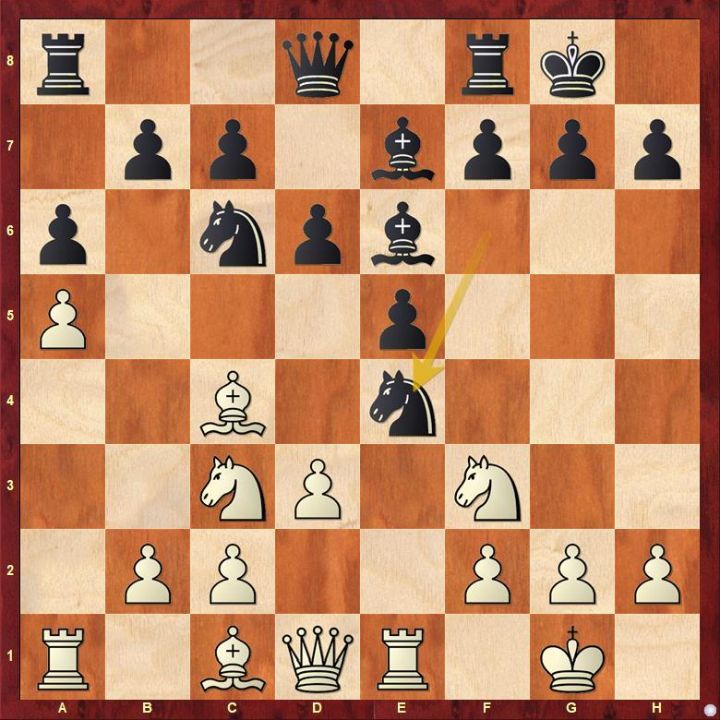 Sure tactically 9...Nxe4 works but positionally it looks suspicious for black. Jorden managed to gain the upper hand and turned the pawn sacrifices in his favor to win the game.

So played it safe and made a draw with Firouzja. The final position seemed to be in favor of So as he had three pawns and ahead by an exchange. 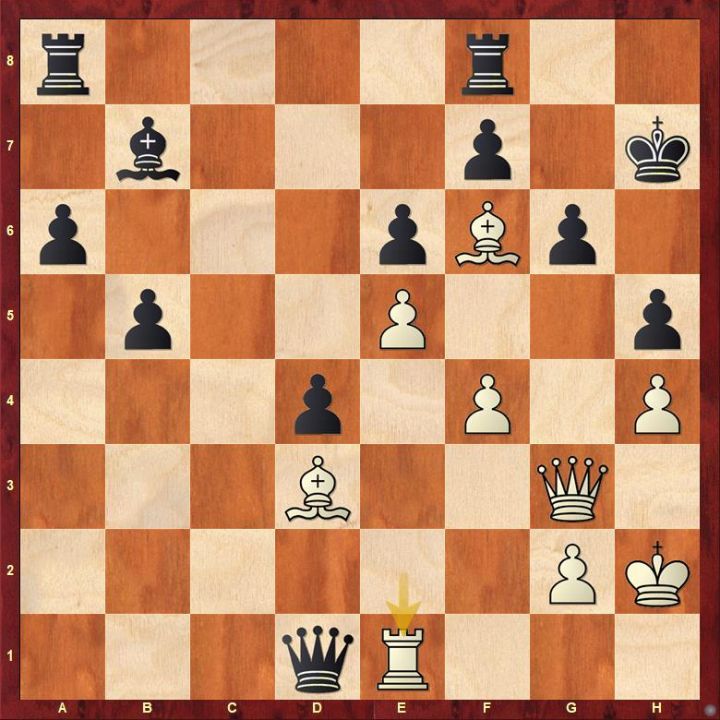 Black can try 31...Qg4 here and it should be winning as even if white decides to avoid the queen exchange, there is not much white can do here to stir up trouble for black. The game ended up in a draw by repetition.

Pichot made an incorrect exchange sacrifice and then he misplayed in the endgame which allowed Carlsen to score a victory.

Radjabov smashed Anton in just 24 moves after the latter went wrong early in the opening. 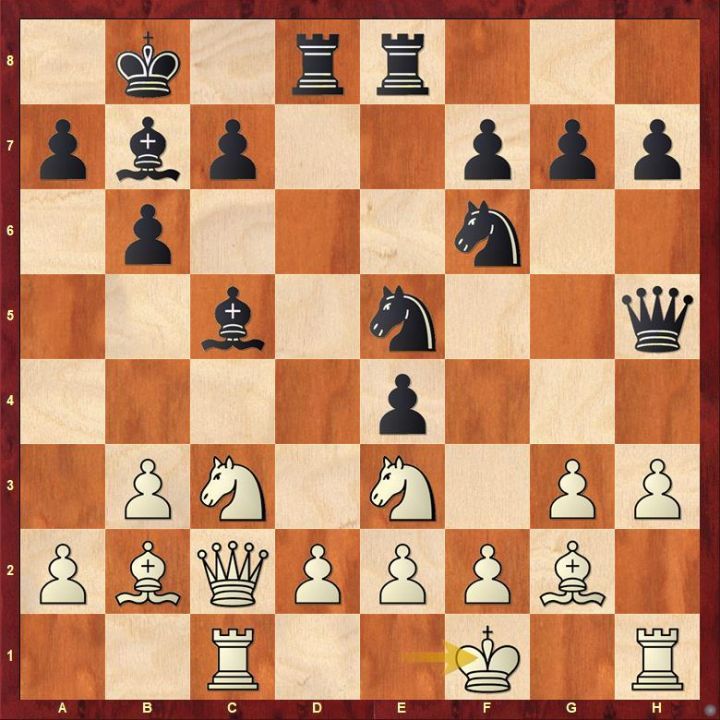 The game is like a cautionary tale of what white should not do in Reti. Find out the best continuation for black after 15.Kf1.

Karjakin made a very practical sacrifice which a computer can refute but a human doing the same in a tournament game is not going to be an easy task. 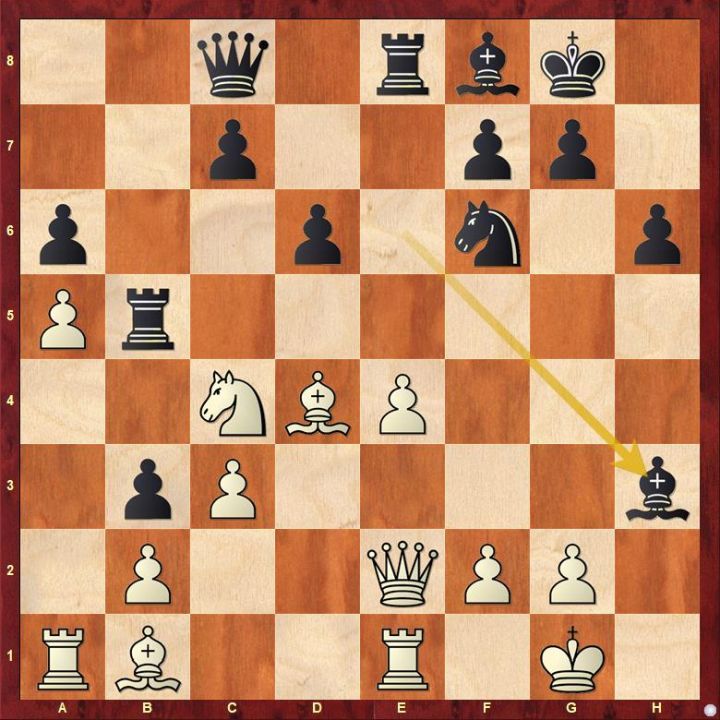 21...Bxh3 looks deadly because black's queen and rook are ready to join the attack immediately. However, white can be resourceful if he finds the correct defense. Much to the chagrin of Grandelius, he could not find the correct way and eventually lost the game.

Mamedyarov made a big mistake in a seemingly equal opposite color bishop endgame against Nepomniachtchi. 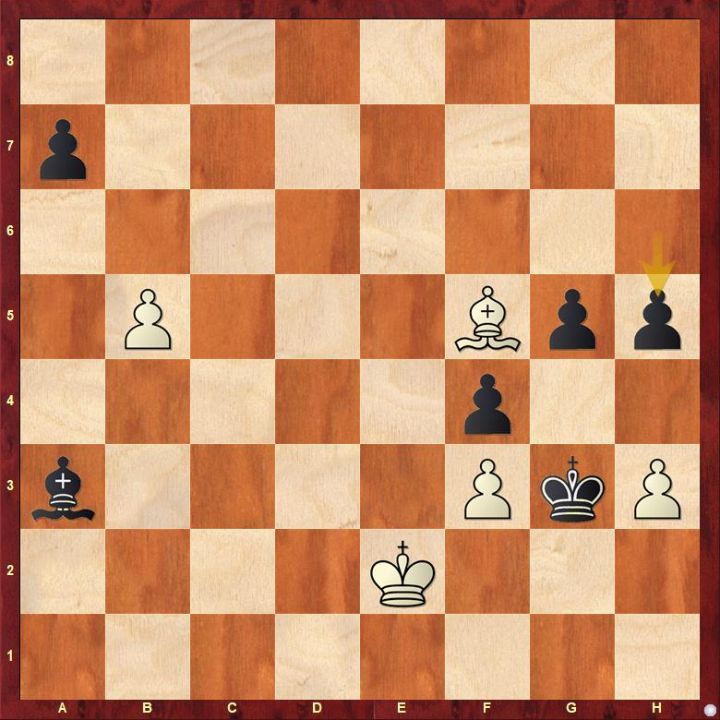 White can still save the game after 48...h5. How? Mamedyarov chose 49.Be6 which allowed black to win the game.

Giri suffered the first loss of the event against Nepomniachtchi. 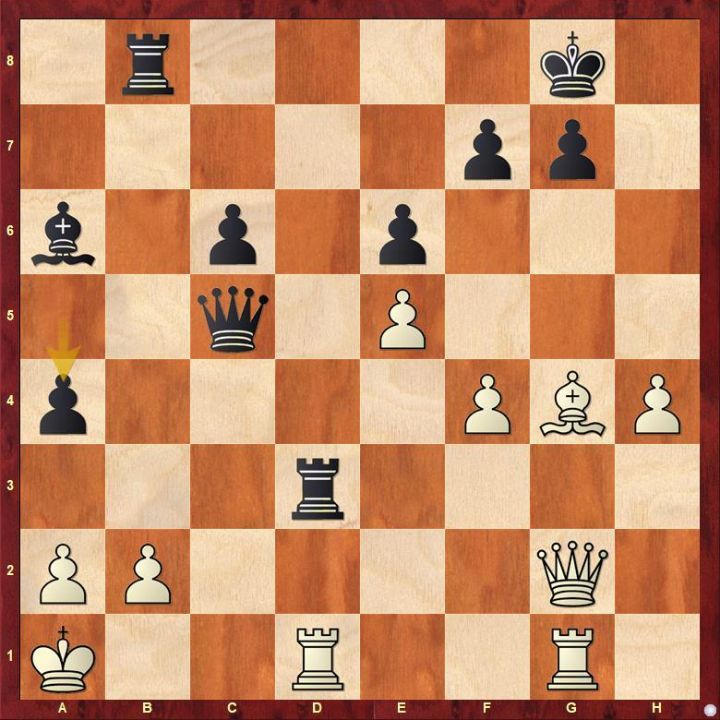 The position was actually in Nepomniachtchi's favor but 26...a4 gave Giri a very good chance to make a comeback in the game. Can you find out what did he miss?

Karjakin went wrong early in the opening which stranded his king at the center of the board. 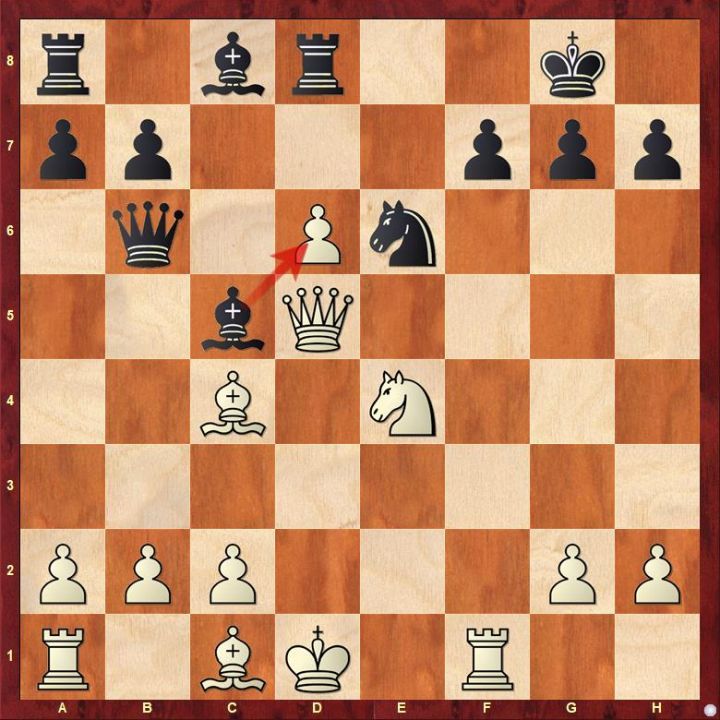 How do you evaluate the above position? Computer will tell you that white is better but of course for a human it is not going to be easy. Karjakin made some incorrect decisions which accentuated Mamedyarov's advantage and eventually he won in another thirteen moves. 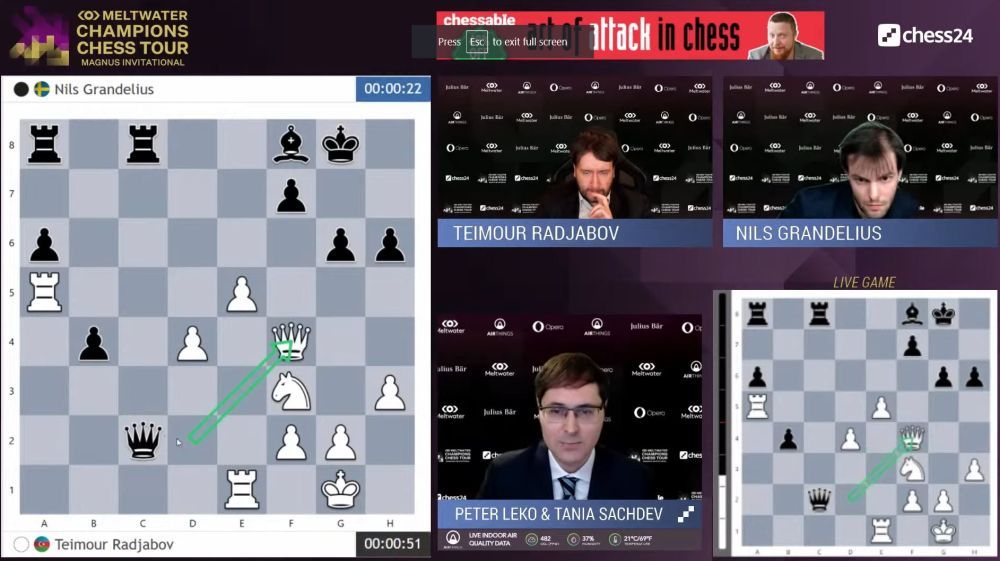 Black needed to play 35...b3 now but he delayed by a move. As the game went on 35...Qf5 36.Qd2 b3. Grandelius still had the upper hand, however after 37.e6 Qf6 was not such a good idea. Instead 37...Qc2 and focusing on the b-pawn would have been better. He had a few more opportunities before the game went into a Queen vs Queen-Bishop endgame where draw became the obvious result.

Alan Pichot despite dominating the majority of the game eventually lost his advantage and the game against David Anton Guijarro. 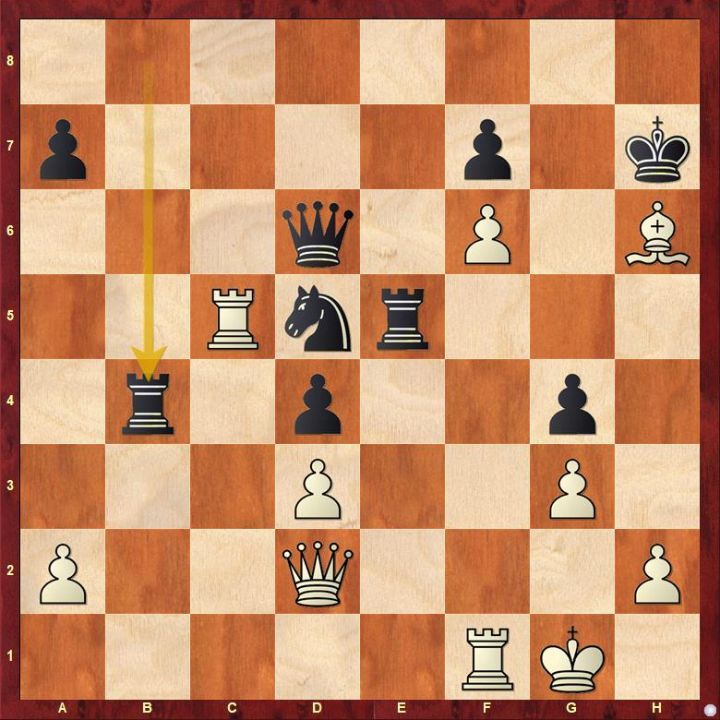 One of the best opportunity white had in the game was after 31...Rxb4. The game went on with 32.Rc8 which was not the best move. Find out what did white miss here.

Dubov had a decent chance in the Rook endgame against Vachier-Lagrave but he did not realize it. 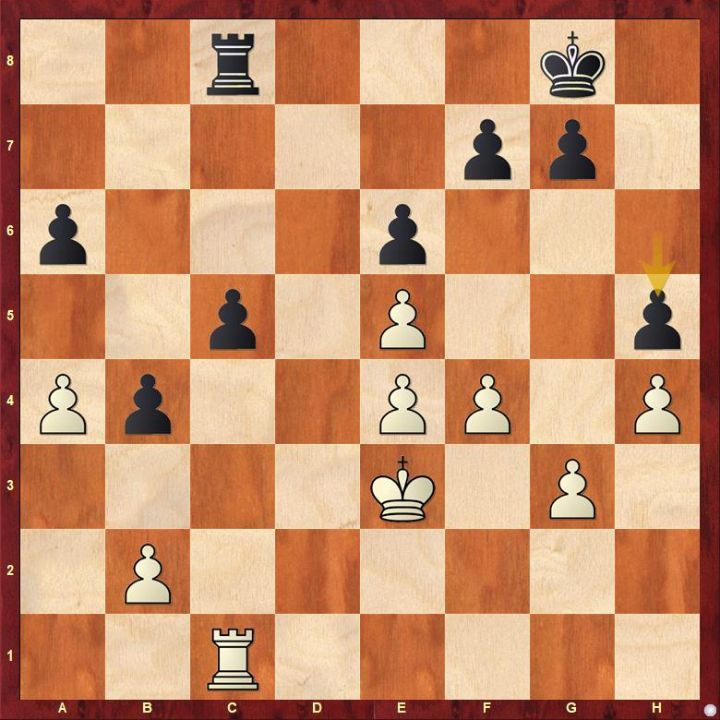 Find out the correct plan for white after 38...h5. White played 39.a5 and all opportunity got evaporated.

Round 13 turned out to be unlucky for the spectators as seven out of eight games ended up in draws. 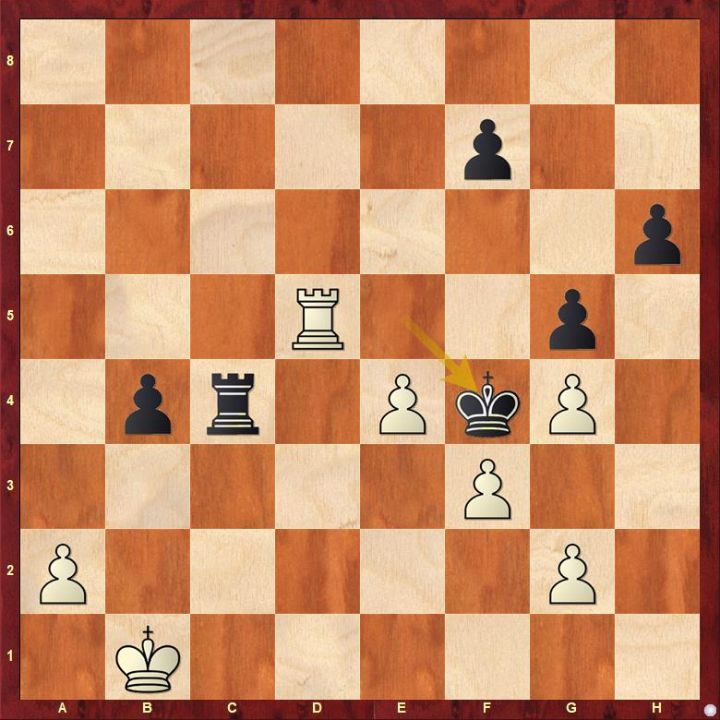 Carlsen had a rare miscue in the Rook endgame as after 38...Kf4, he did not play it correctly to score the full point and the game eventually ended up in a draw after another 27 moves.

The only decisive game of the round was Grandelius' victory over Argentina no.1 Alan Pichot.

Round 14: Jordan misses against Vachier-Lagrave

Mamedyarov had a good opportunity against Pichot in the Rook endgame.

Black has a central passed pawn and a better king position. Definitely black should push for a win. How? The game continuation 35...Re3 was not the best idea.

So scored a fine victory over Grandelius. 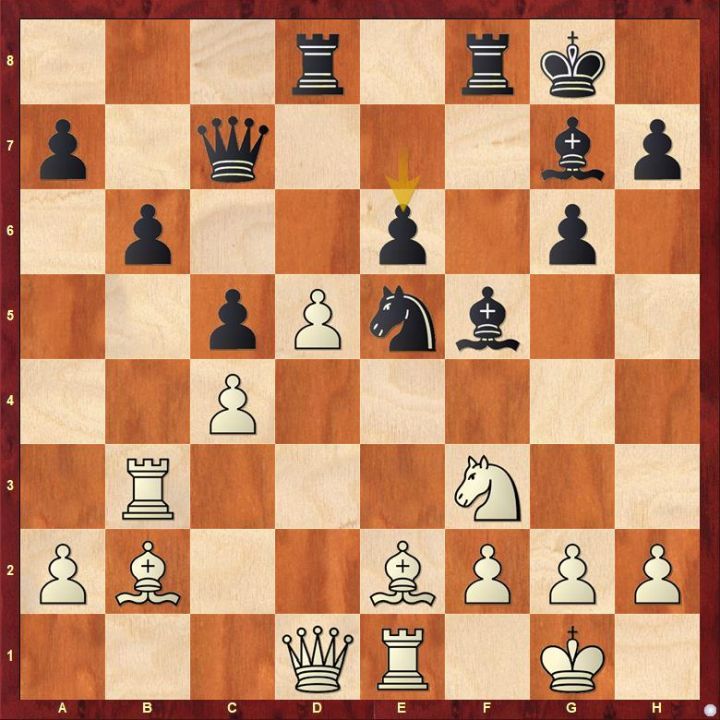 Aronian displayed his technical prowess against Anton to score a victory.

Dubov-Carlsen was a hard fought draw. However Carlsen could have made things difficult for his opponent.

Jorden despite being better for the majority of the game against Vachier-Lagrave, eventually settled for a draw. 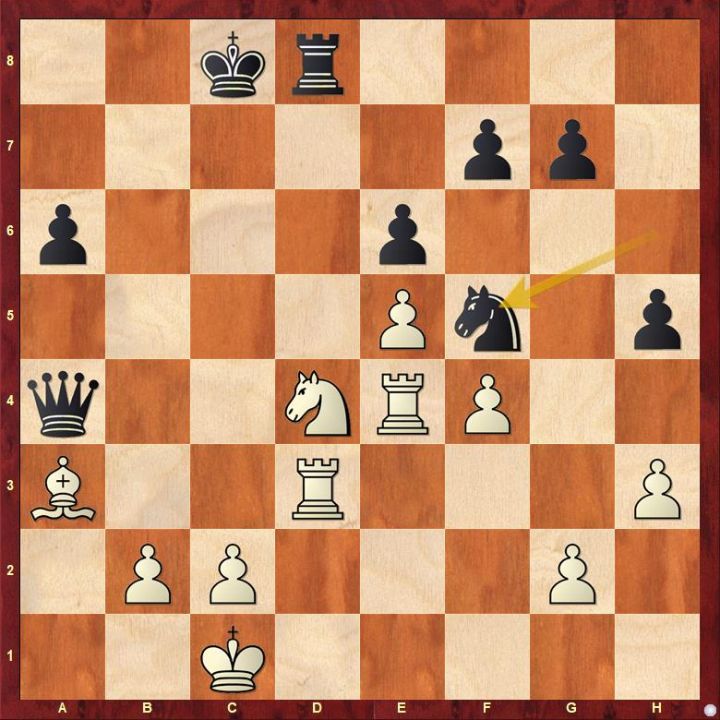 Radjabov's bold approach against Karjakin did not work out and he lost the game. 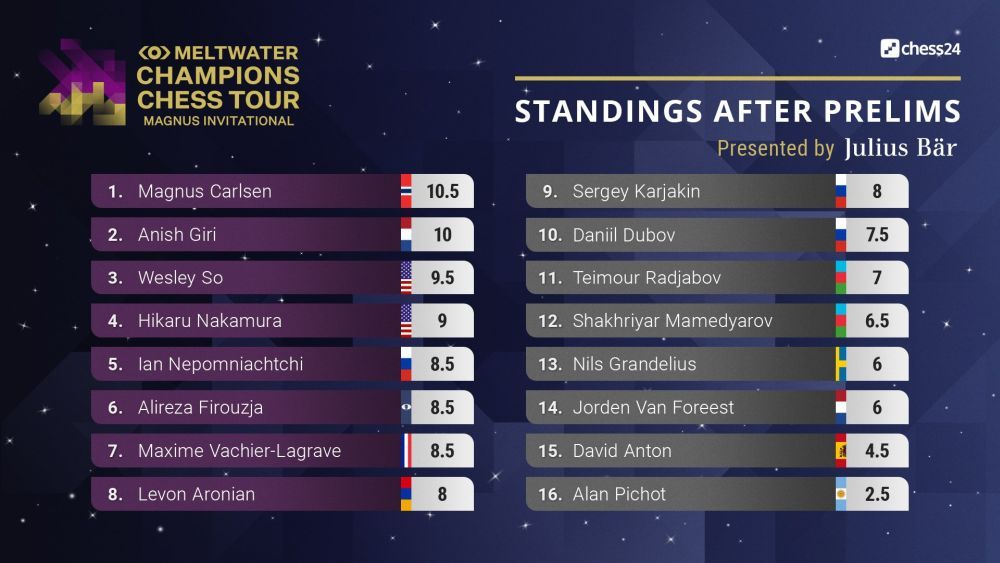 Carlsen-Aronian and So-Firouzja will definitely be the matches to look out for | Photo: Champions Chess Tour