Highlights of this issue #196

Can you find all the right ideas in Yu vs So!? Interactive video with Simon Williams

French - the next level

Tanmay Srinath deals with the highly tactical 10.Qd3!? in the Winawer

Two bishops vs. rook and knight

In vogue against the King's Indian

How I countered the champ's novelty

“Test against the best”

Royal duel in the open h-file

Show good nerves and put your king out of danger! Interactive video with Oliver Reeh "What is your favourite Bobby Fischer game?", we asked our authors. You will find the answers on the DVD: A collection of 17 personally annotated Fischer games! 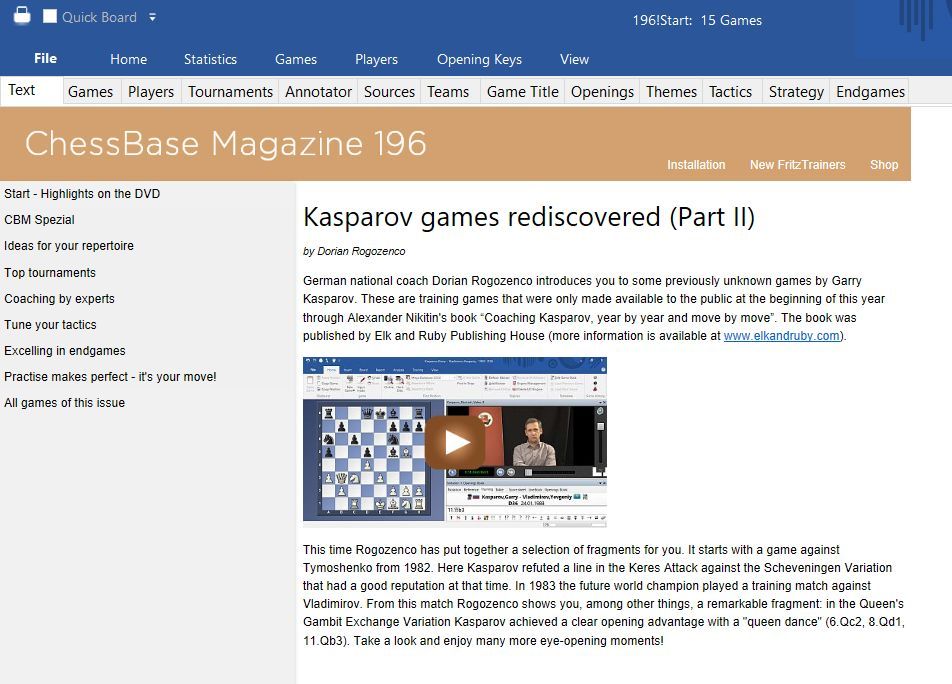 German national coach Dorian Rogozenco introduces you to some previously unknown games by Garry Kasparov. These are training games that were only made available to the public at the beginning of this year through Alexander Nikitin's book “Coaching Kasparov, year by year and move by move”. This time Rogozenco has put together a selection of exciting fragments for you. Enjoy many eye-opening moments! 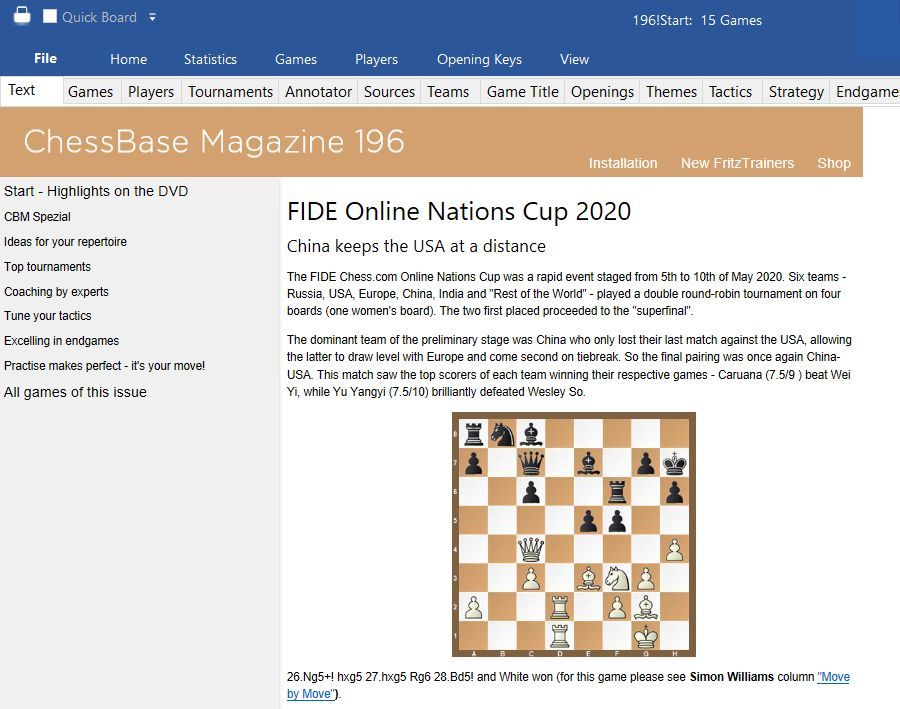 Three videos on topical opening themes await you: Daniel King shows why there is no need to fear the Four Pawns Attack in the Alekhine Defence. Jan Werle presents in the second part of his report on the Slav with 4...Bg4 his experiences with the White plan 5.Qb3 Qb6 6.Ne5. And Mihail Marin checks out the "Nepomniachtchi Variation". 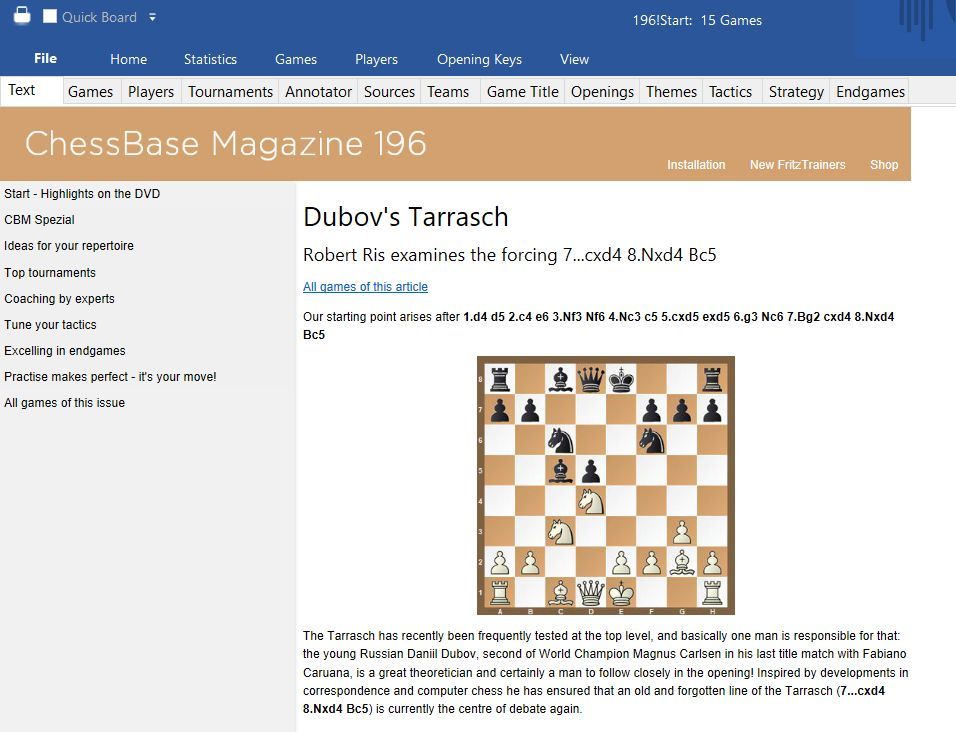 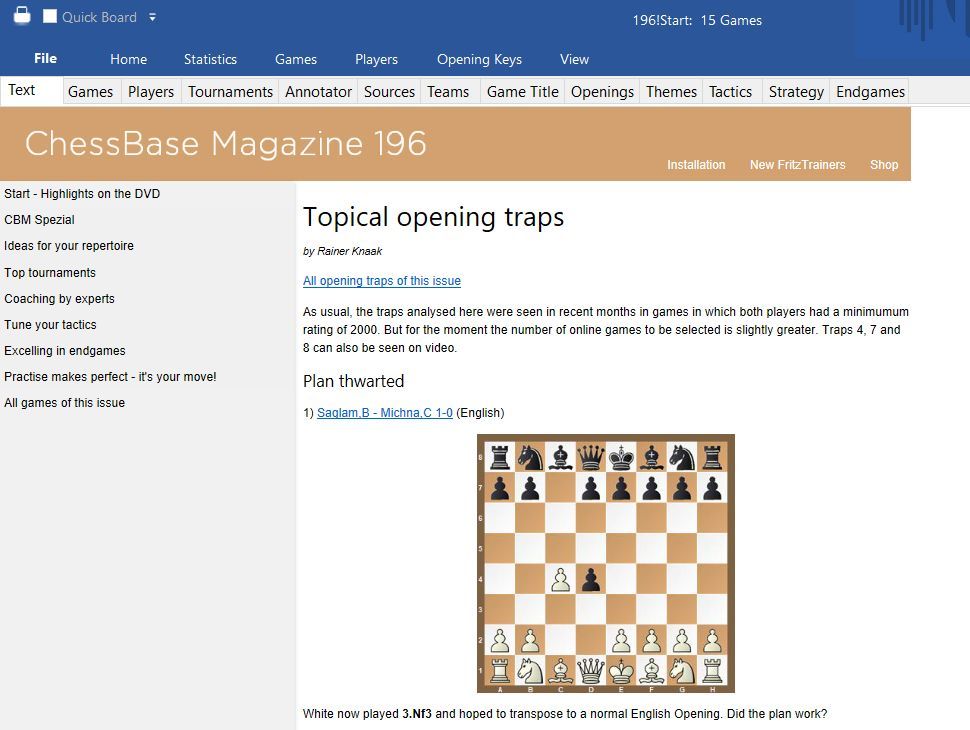 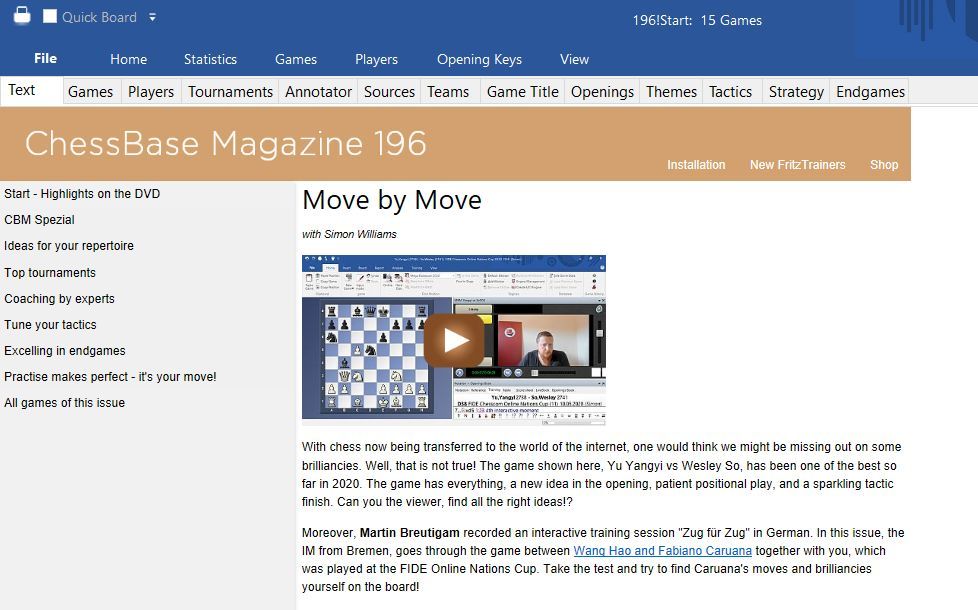 With chess now being transferred to the world of the internet, one would think we might be missing out on some brilliancies. Well, that is not true! The game shown here, Yu Yangyi vs Wesley So (Nations Cup 2020) has everything, a new idea in the opening, patient positional play, and a sparkling tactic finish. Can you find all the right ideas? 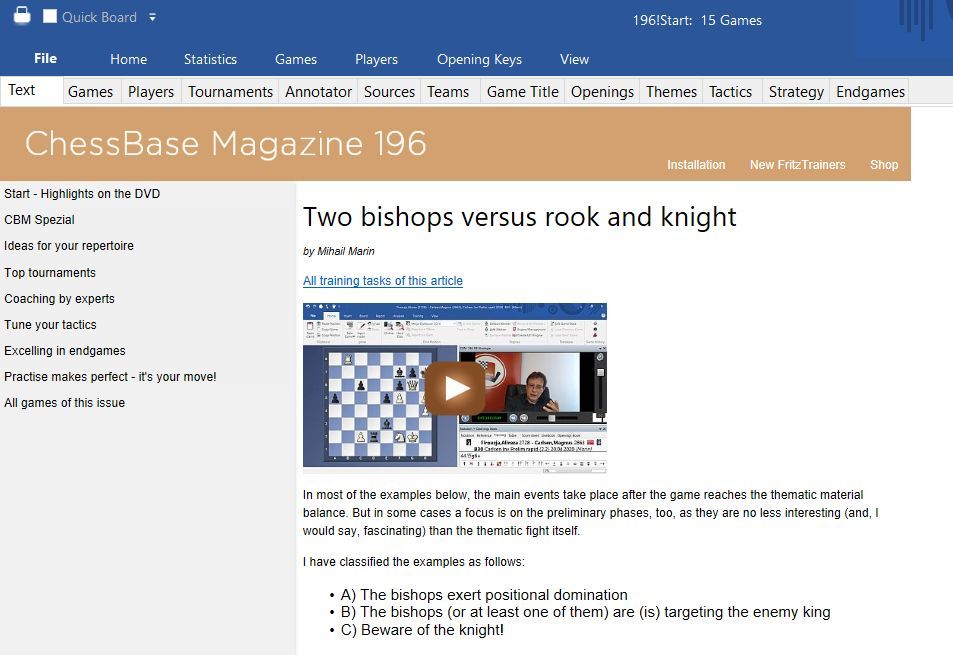 When is the bishop pair better and stronger than the combination of rook and knight? Strategy expert Mihail Marin gives hints as to what demands particular care in this distribution of material. With video introduction and many training tasks! 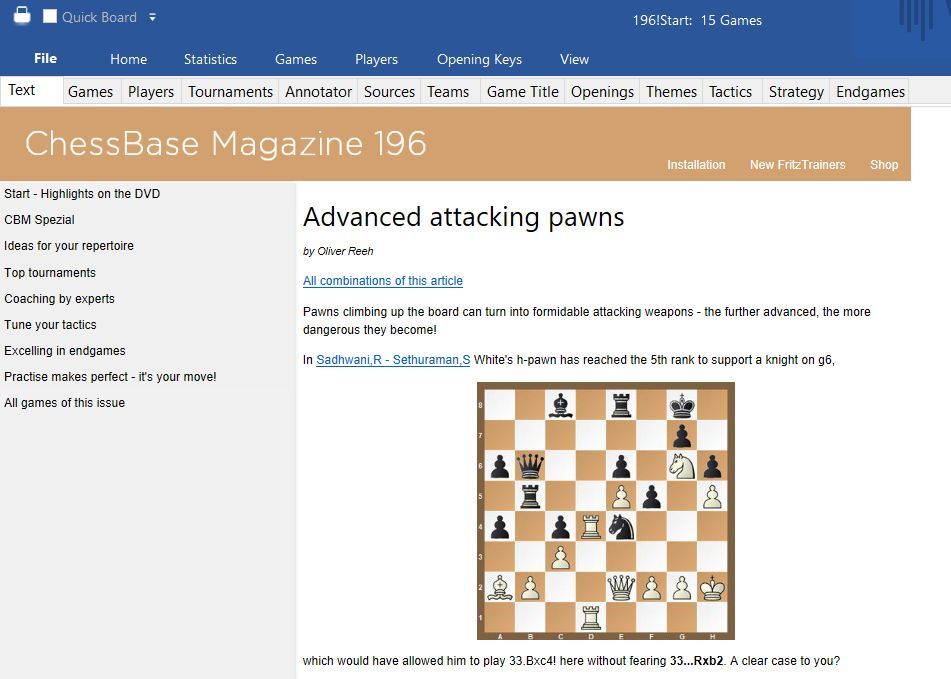 Sharpen your killer instinct with the help of Oliver Reeh's tactical column: 26 games with many training questions are waiting for you. Oliver Reeh also invites you to solve his three favorite combinations with him in interactive video format. 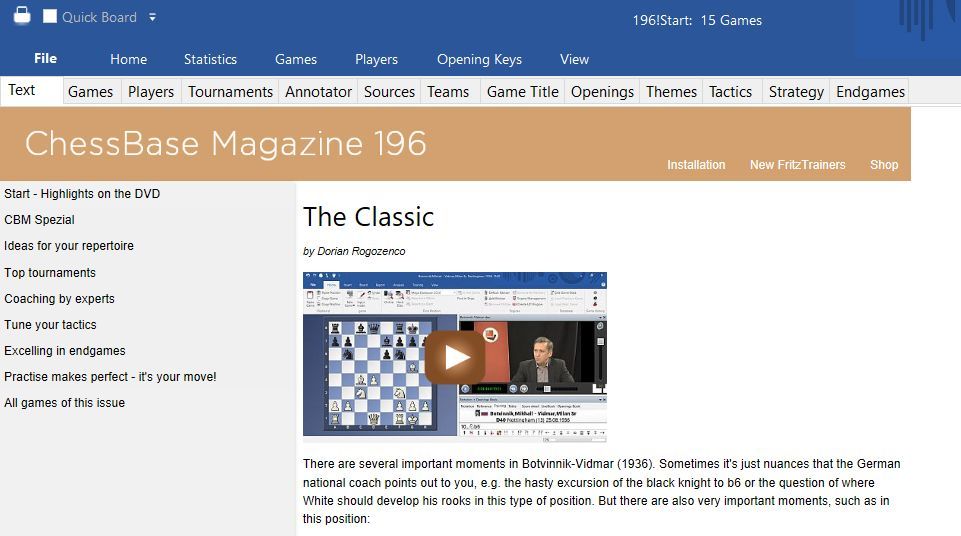 There are many instructive moments in the classic game Botvinnik-Vidmar from 1936. Sometimes it's just nuances that the German national coach Dorian Rogozenco points out. In the decisive attack however, Botvinnik used a standard plan that every ambitious chess player should know! 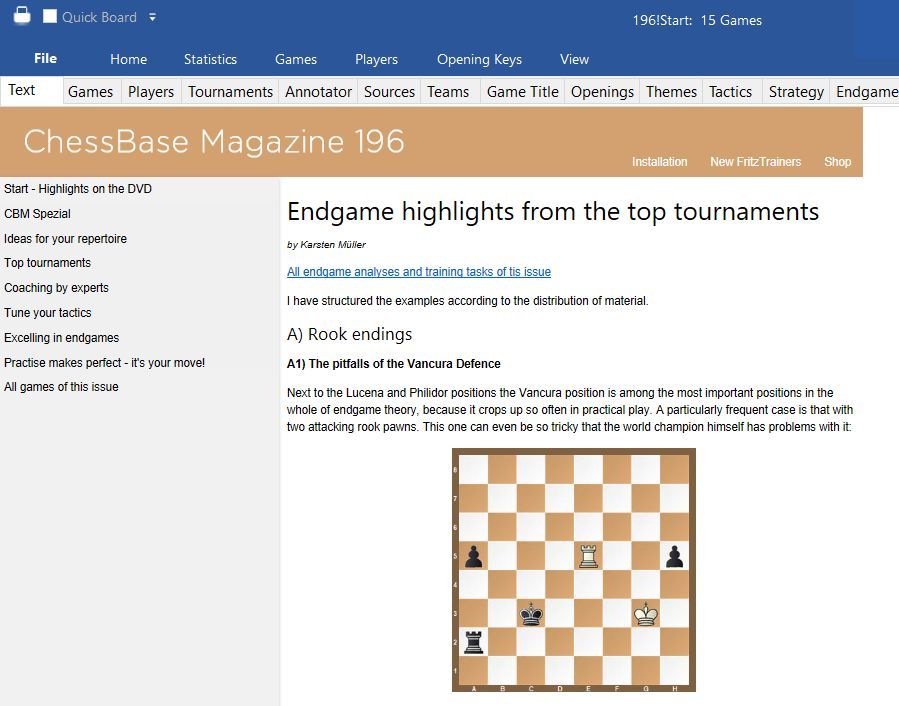 Karsten Müller provides plenty of material on the fundamental topic of pawn endgames and demonstrates techniques such as the breakthrough in undermining, Bähr's rule and much more. In addition, the endgame expert from Hamburg came across many exciting endgames at the top tournaments of this edition. So he decided to compile his analyses and findings for you in a separate article!