ChessBase Magazine is the most comprehensive and most sophisticated chess magazine there is. Star analyses: Giri, Firouzja, So, Duda, Navara, Van Foreest, Nielsen, Ganguly, Nihal and many more. Anish Giri reviews his game against one of his seconds Jorden Van Foreest, Simon Williams discusses Dubov’s King Hunt against Svane, David Navara analyses his endgame victory over Dmitry Jakovenko from the Jerusalem Grand Prix, Karsten Müller shows another fundamental endgame topic, Mihail Marin explains how to evaluate positions when only Queen and Rook remains on the board after minor pieces are exchanged off, 11 opening articles with new repertoire ideas and much more. Photo: ChessBase 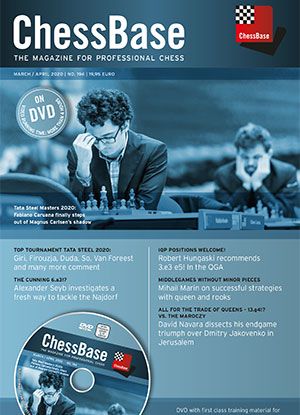 Alexander Seyb investigates a fresh way to tackle the Najdorf

Mihail Marin on successful strategies with queen and rooks

Together with Simon Williams, retrace the game Dubov-Svane - “Move by Move”!

A fresh wind against the Caro-Kann Exchange Variation

My first draw against the World Champion!

Real sacrifices are the ones not leading to victory directly. Interactive video with Oliver Reeh!

Rainer Knaak presents another trap in the Philidor Defence (video) 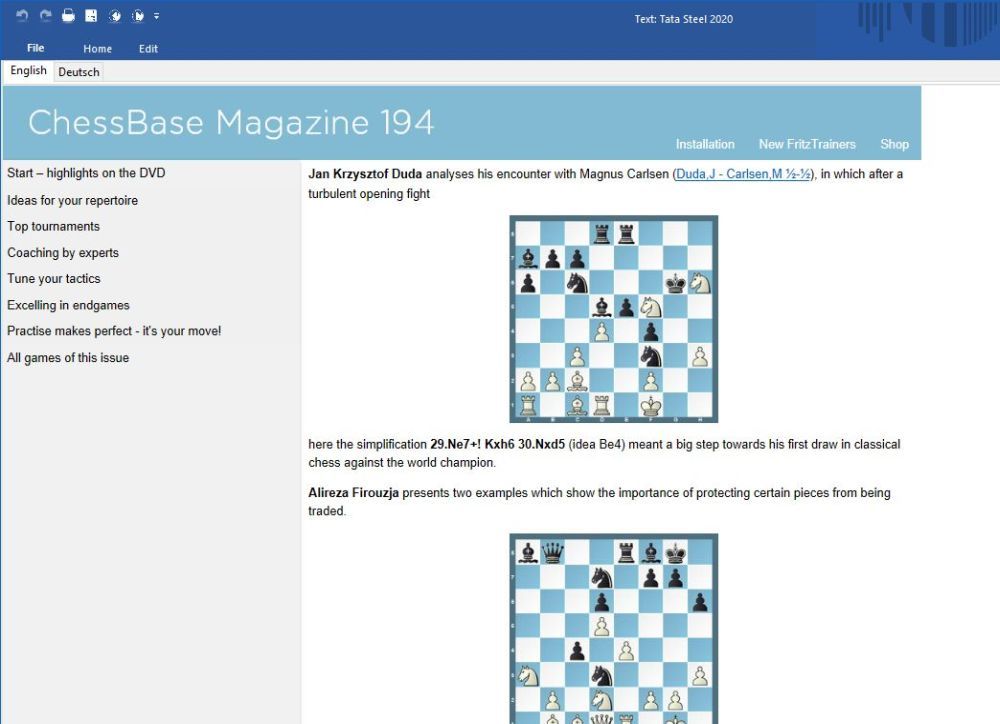 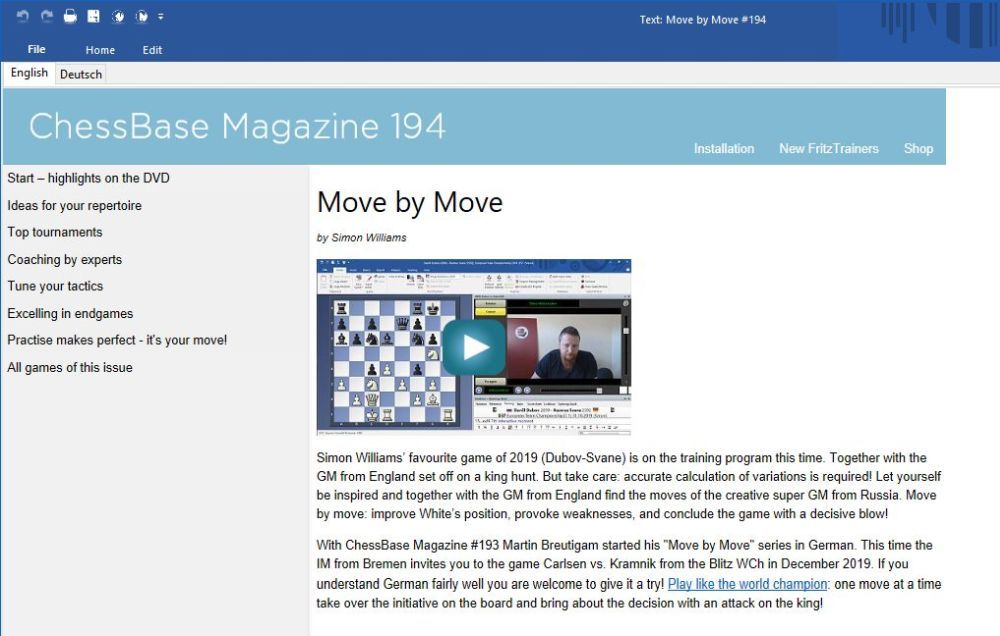 Simon Williams’ favourite game of 2019 (Dubov-Svane) is on the training program this time. Together with the GM from England set off on a king hunt. But take care: accurate calculation of variations is required! Let yourself be inspired and together with the GM from England find the moves of the creative super GM from Russia. Move by move: improve White’s position, provoke weaknesses, and conclude the game with a decisive blow! 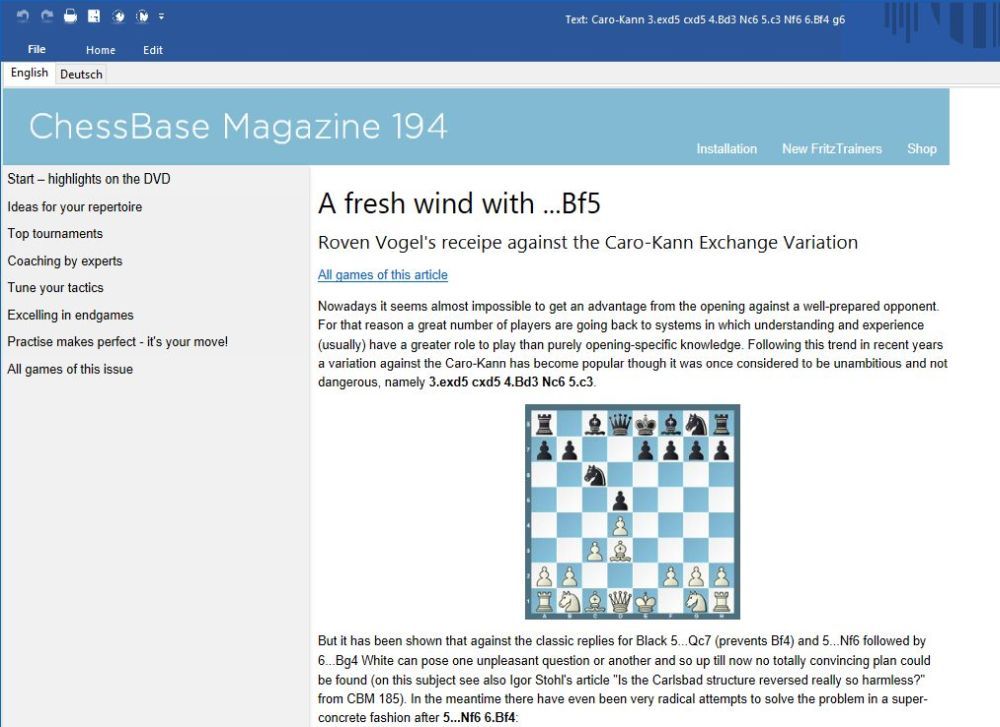 11 opening articles with new recommendations for your repertoire await you:

Alexander Seyb: Sicilian Najdorf with 6.a3 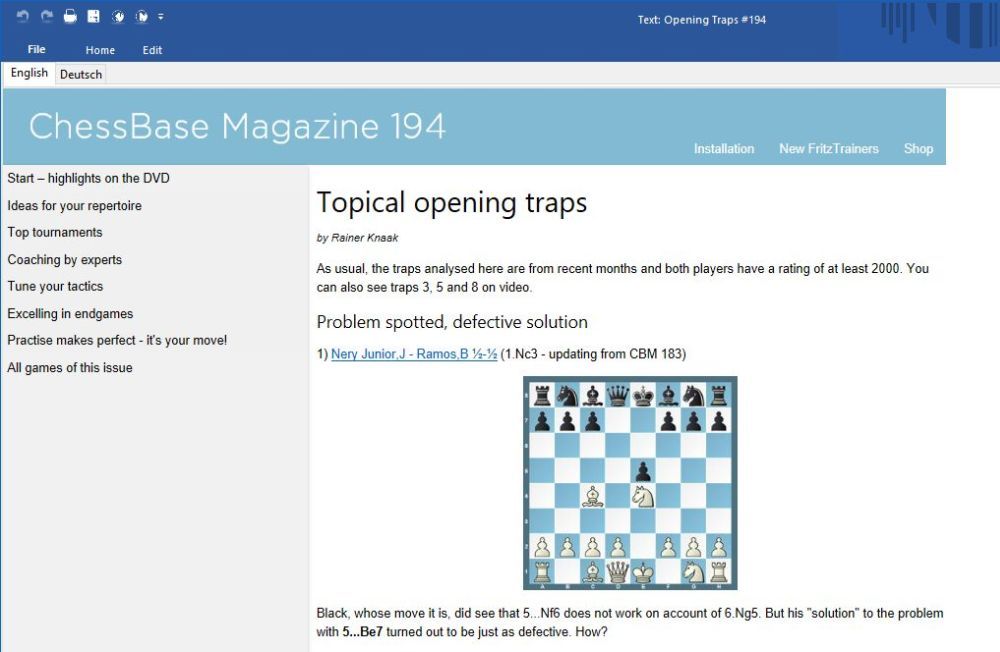 Strategy – "Only queens and rooks!" 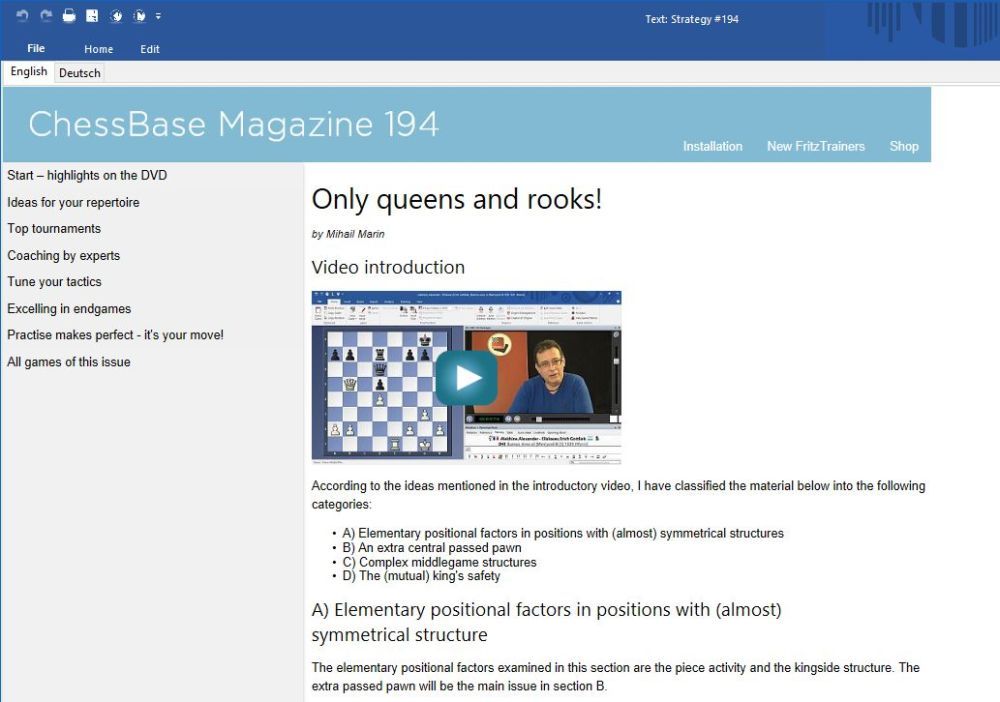 Whenever all the minor pieces have been exchanged, play takes on quite unique characteristics. What features are important for the evaluation of positions? What does the optimal position for the king look like? Mihail Marin shows you what is important!

Tactics – "Queens on the rampage" 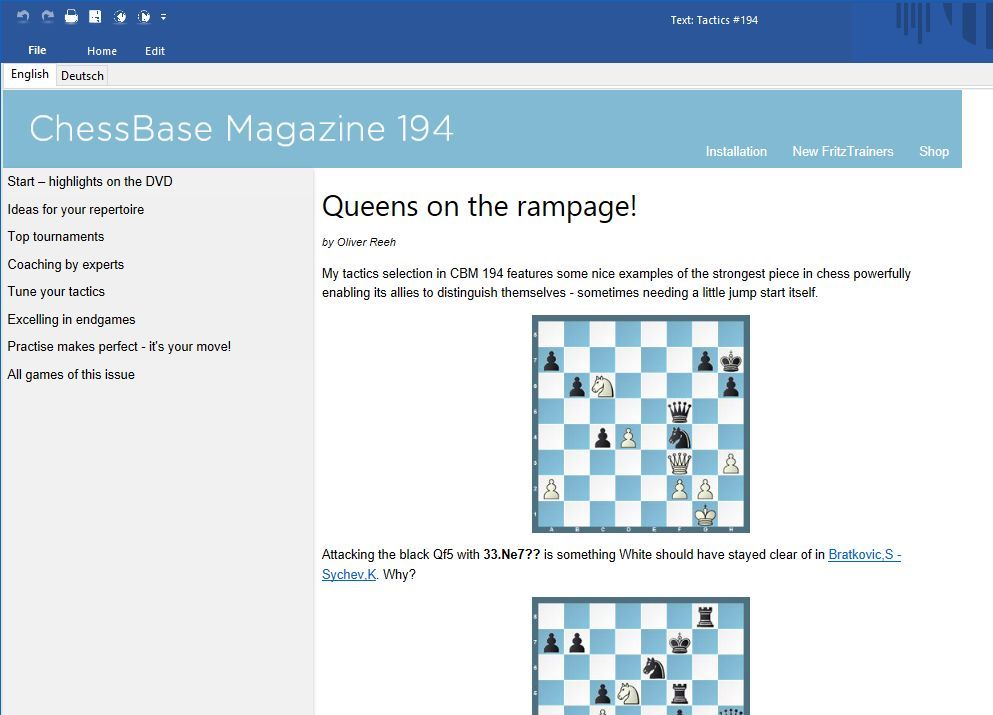 Oliver Reeh’s tactical selection contains 28 recent games, which are each studded with at least one training question. Moreover, the IM from Hamburg presents his three favourite combinations in interactive video format. 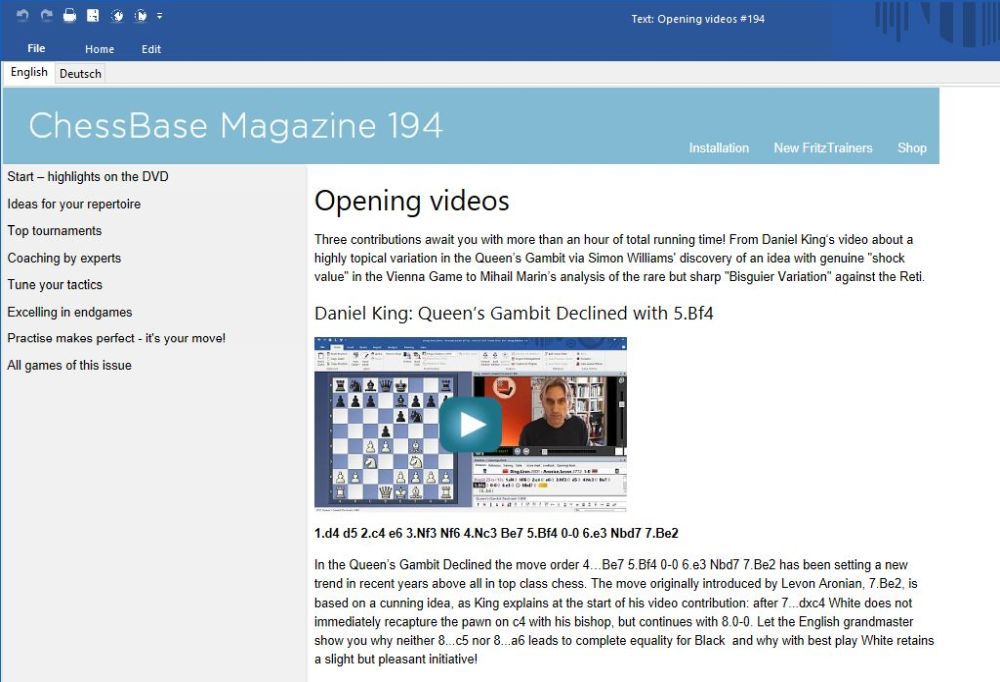 Three contributions await you with more than an hour of total running time! From Daniel King's video about a highly topical variation in the Queen’s Gambit via Simon Williams' discovery of an idea with genuine "shock value" in the Vienna Game to Mihail Marin’s analysis of the rare but sharp "Bisguier Variation" against the Reti. 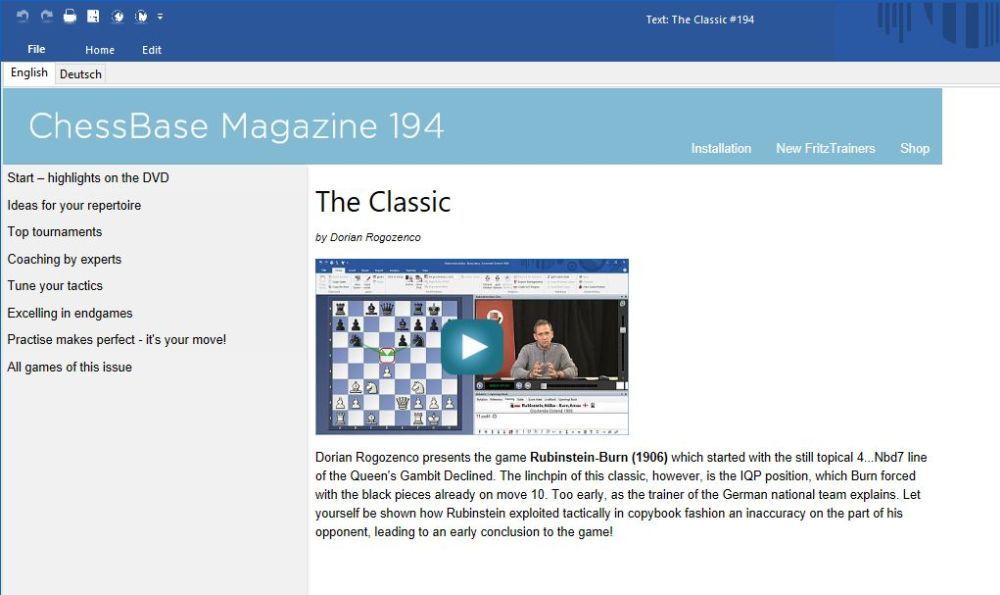 Dorian Rogozenco presents the game Rubinstein-Burn (1906) with a position involving an IQP on d4. Watch how Rubinstein tactically exploited his opponent's inaccuracy in textbook style, leading the game to an early conclusion!

Endgame – "Recent endings with bishops of the same colour" 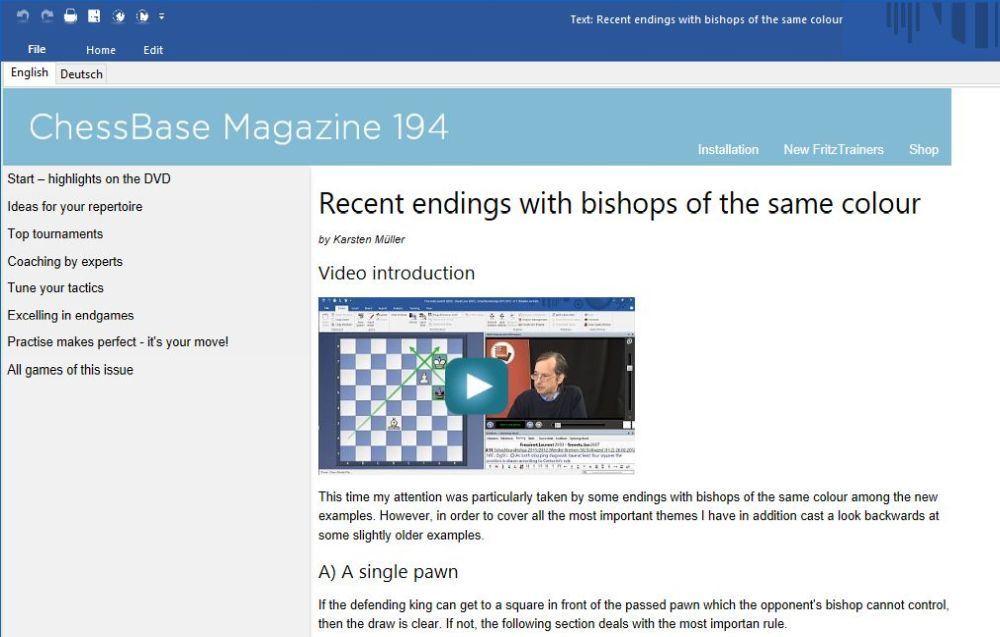 Karsten Müller explains another fundamental endgame topic by means of catchy terminology, such as "granite blocks of pawns", and rules of thumb like "Centurini’s rule". Plus endgame videos with a total running time of over an hour and an extra column: "Readers write". 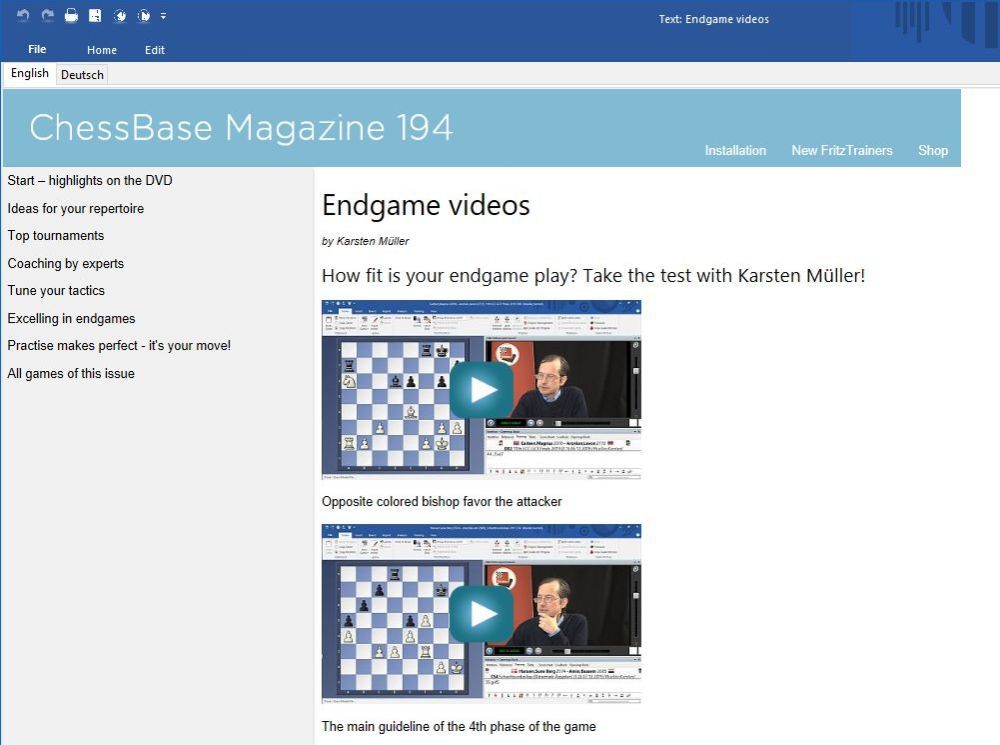