New: Kasimdzhanov: The Benoni is back in Business

The Benoni Defense leads to asymmetrical, double-edged positions that give Black good chances to play for a win. On his new DVD, Rustam Kasimdzhanov, coach and second of Fabiano Caruana, shows why the Benoni is much better than it's theoretical reputation and that it is an entirely solid line which offers Black a lot of dynamic possibilities. It is good time to increase one more weapon in the arsenal by learning the Benoni Opening from the former Asian and World Champion Rustam Kasimdzhanov. It goes without saying that his knowledge is impeccable and knowing Benoni can help you to strengthen your preparation from the black's side. Photo: ChessBase

Rustam Kasimdzhanov: The Benoni is back in Business 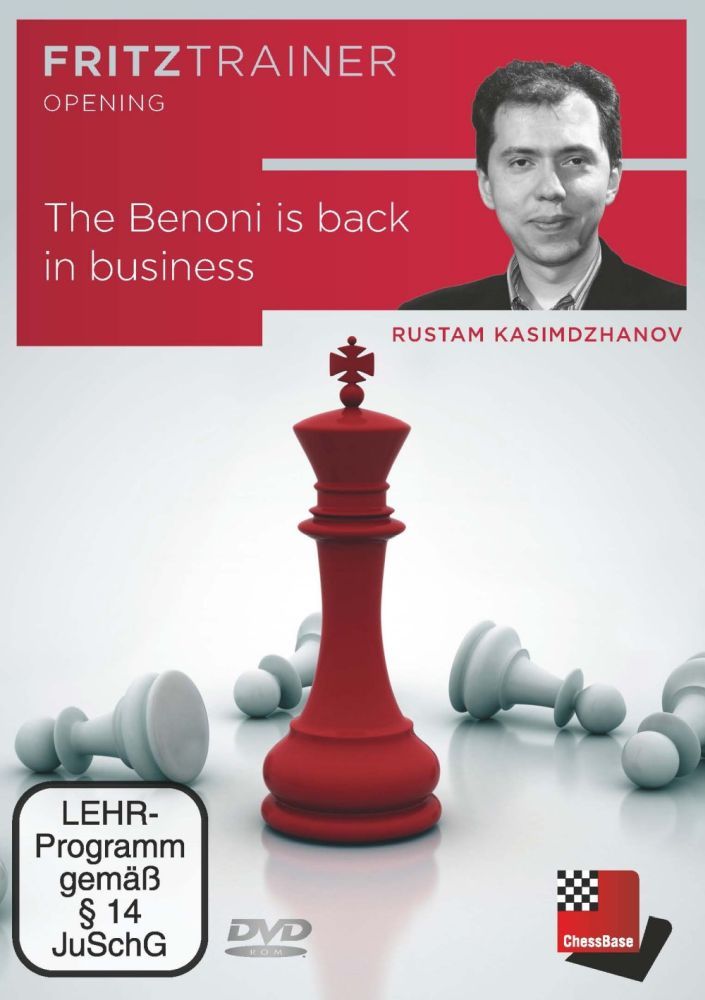 The Benoni is characterised by the moves 1.d4 Nf6 2.c4 c5 3.d5 e6 and is a popular opening weapon amongst club players. On top level it’s a rare guest but with this DVD Rustam Kasimdzhanov, opening expert and second and coach of Fabiano Caruana, might change that.

New ways and approaches in most lines and countless improvements of official theory will show you how to play this opening at any level with success. Kasimdzhanov's preferred move order to reach the Benoni is 1.d4 Nf6 2.c4 e6 3.Nf3 c5 which complements his already published DVD on the Nimzo-Indian (1.d4 Nf6 2.c4 e6 3.Nc3 Bb4).

Kasimdzhanov goes into extreme detail, showing that the Benoni is a reliable opening that often leads to truly fascinating positions. Players of all levels will enhance their knowledge of the opening and their general understanding of dynamic positions.

Moreover, you’ll be able to practice the lines shown in the Opening Trainer and you can play key positions to improve your understanding of typical structures and patterns of the Benoni.

Rustam Kasimdzhanov. Born in 1979, the grandmaster from Uzbekistan has for many years been known as a very strong and imaginative player. However in 2004 Rustam Kasimdzhanov (pronounced “Kah-zeem-jha-nov”) shocked the chess world by winning the FIDE World Chess Championship title, beating a string of World-Class players like Ivanchuk, Grischuk, Topalov and Adams in the process. Kasimdzhanov is a very deep player, who is able to explain chess ideas in an eloquent, lucid style, with a fine touch of humour. His lessons are both entertaining and instructive – perfect for students who seek to avoid “dry” theory. Kazimdzhanov was a second to Vishy Anand in three World Championship matches and he is the second and trainer of Fabiano Caruana.