The new ChessBase Magazine # 203 already whets the appetite for the World Championship match in November. In the "Special: Ian Nepomniachtchi" each of our authors analyses their favorite game of the new challenger. The result is an exclusive collection of 21 extensively annotated games. Karsten Müller puts the technique of the 31-year-old Russian to the test in his contribution "Nepomniachtchi’s Endgames". And Mihail Marin explores the question of what distinguishes “Nepos” playing style. Adhiban, Krasenkow, Navara, Praggnanandhaa, Vitiugov, Wojtaszek and others comment on their games from the World Cup. Plus 10 opening articles ("The Scandinavian under pressure", "News from the Fantasy Variation" etc.), opening videos by King, Werle and Marin as well as training columns on tactics, strategy and endgame. We present all of this to you in the new CBM layout!. Photo: ChessBase

Highlights of this issue #203

ChessBase Magazine #203 awaits you with a completely redesigned start page: 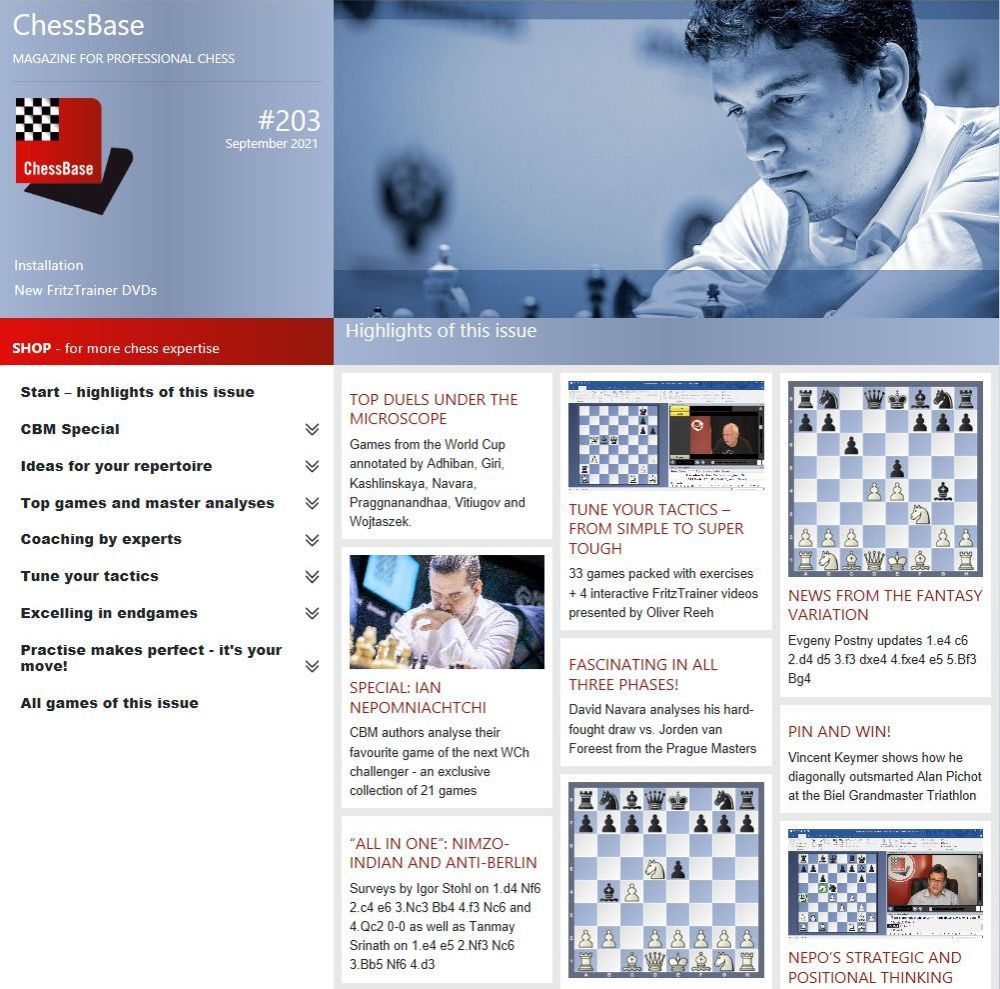 Here you will find the special recommendations of the editors - the highlights of the issue to click on and enjoy! E.g. analyses from the FIDE World Cup by Adhiban, Krasenkow, Navara, Praggnanandhaa, Vitiugov and Wojtaszek as well as Mihail Marin's video introduction to his article “Nepomniachtchi’s strategic and positional thinking”, or the theory update on the Fantasy Variation in the Caro-Kann by Evgeny Postny etc. 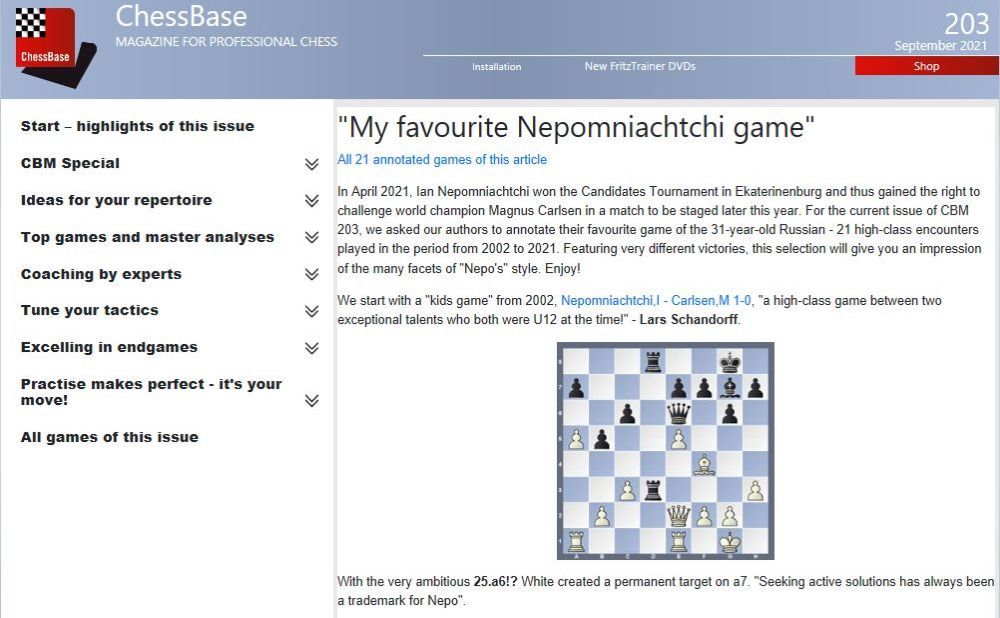 CBM authors comment on their favorite game played by the 31-year-old Russian star. Look forward to an exclusive collection of 21 high-quality games played in the period 2002-2021!

FIDE World Cup 2021: Jan-Krzysztof Duda was the only player to remain undefeated. In the semifinals he knocked out the world champion in the rapid tie-break, and in the final he made short work of Karjakin in the second classical game. In this issue, Adhiban, Krasenkow, Navara, Praggnanandhaa, Vitiugov and Wojtaszek comment on their best games from the World Cup. 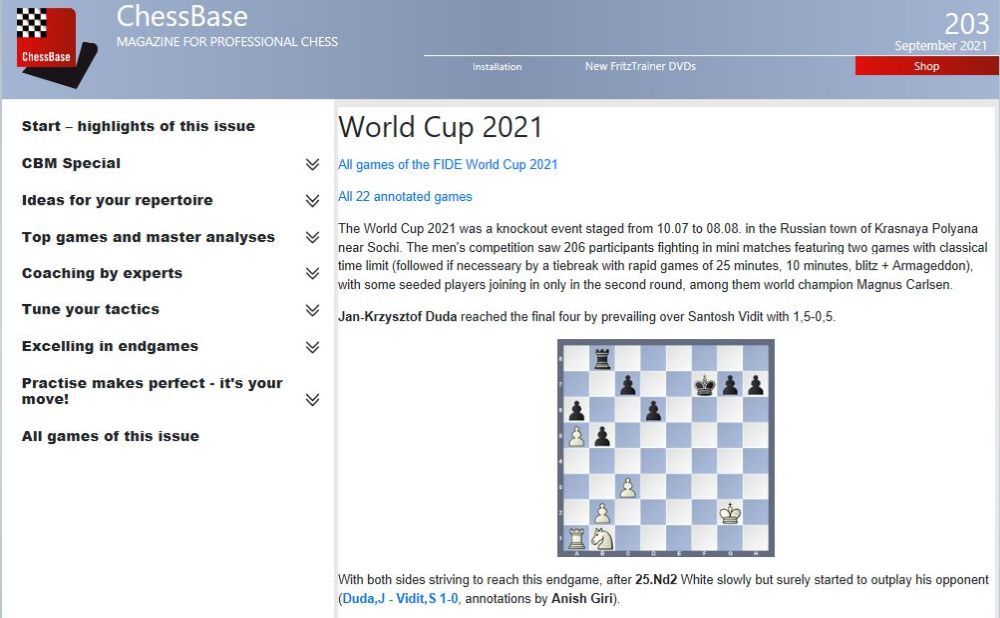 More annotated games: Kasimdzhanov analyses his win against Kollars from Dortmund. Plus analyses by Giri, Keymer, Navara and Wojtaszek from the tournaments in Prague, Dortmund and Biel.

Here you can find out everything you need to know about a specific opening line. And that based on just one extensively annotated game! 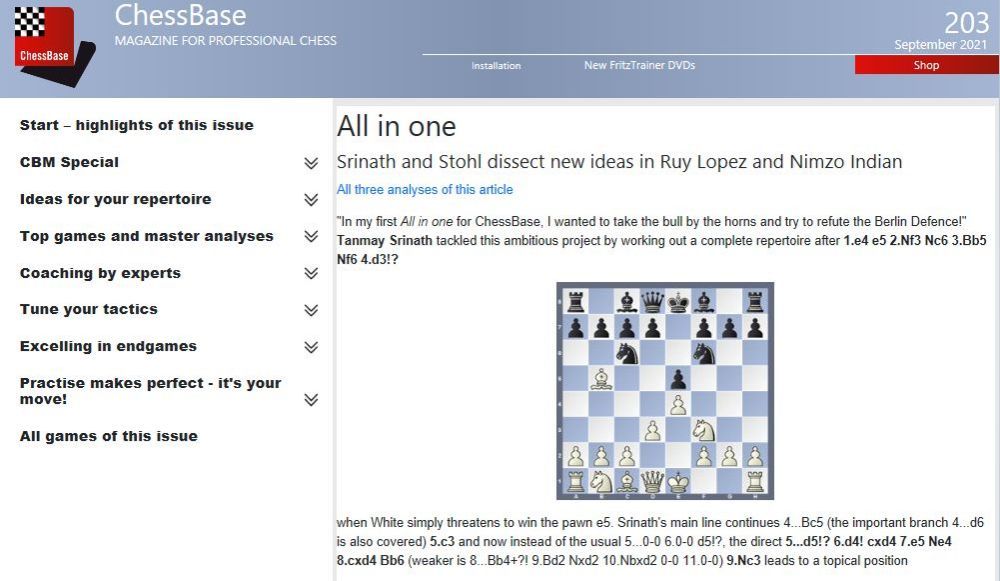 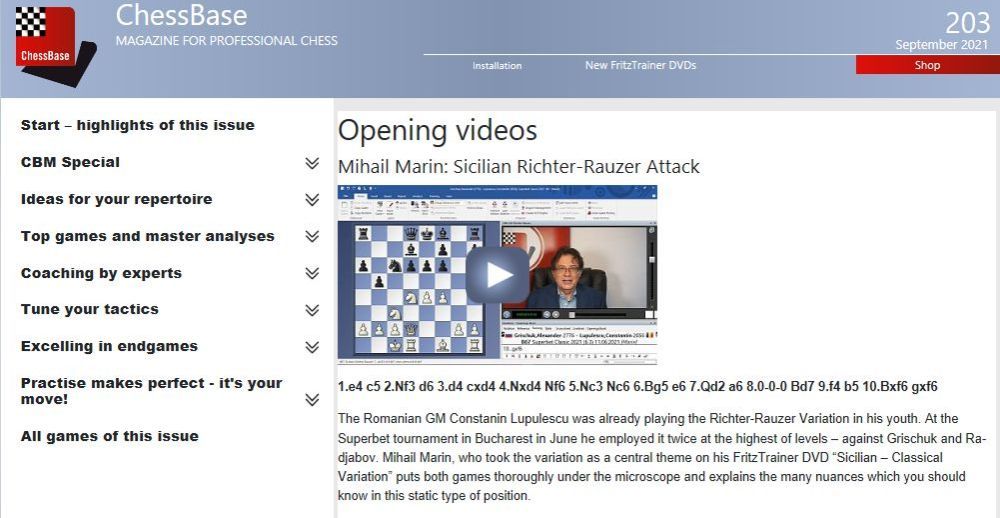 Daniel King takes up a current provocation of the world champion in the Nimzo-Larsen Attack! Mihail Marin explains the subtleties of the Richter-Rauzer Variation using two current games from the Superbet Tournament. And Jan Werle reveals to you why White is well advised to aim for the endgame from the Catalan Opening. 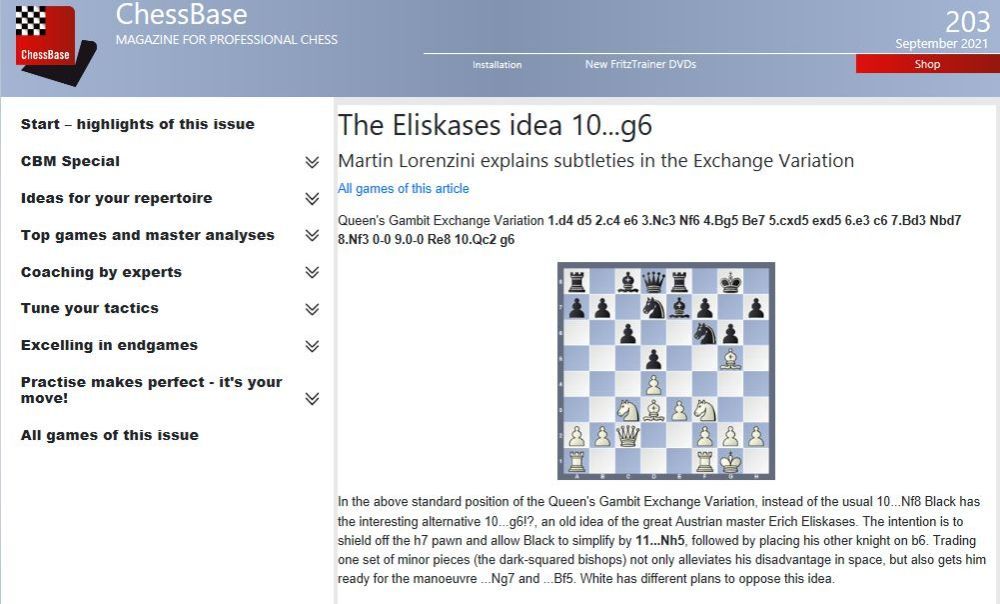 10 opening articles with many exciting ideas for your next games are waiting for you! 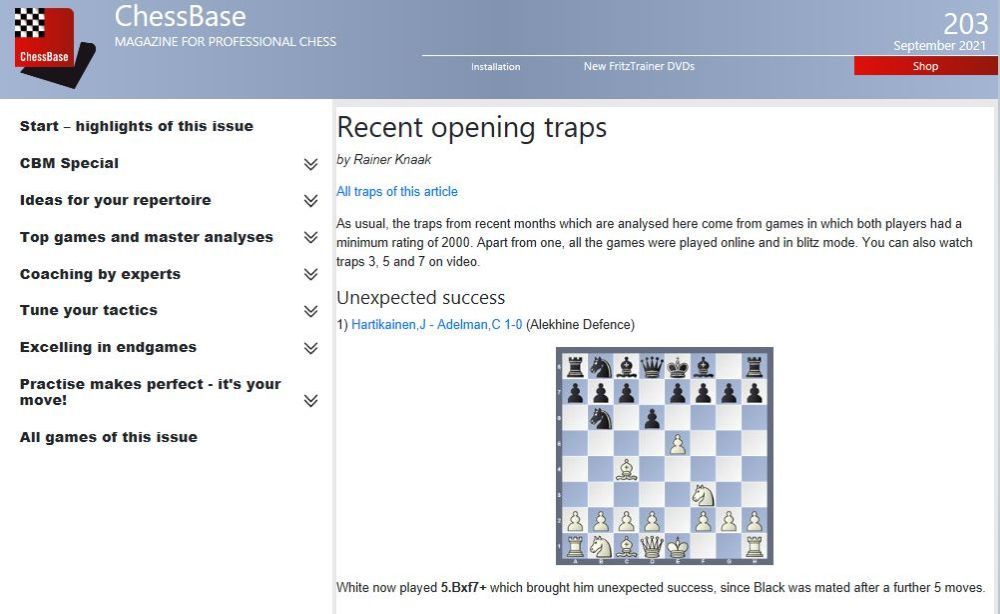 Time and again, the Sicilian! Our expert Rainer Knaak presents eight current examples, three of which are also available in video format. The focus is on the different lines of the Sicilian Opening, especially the tempting move Qd8-b6! 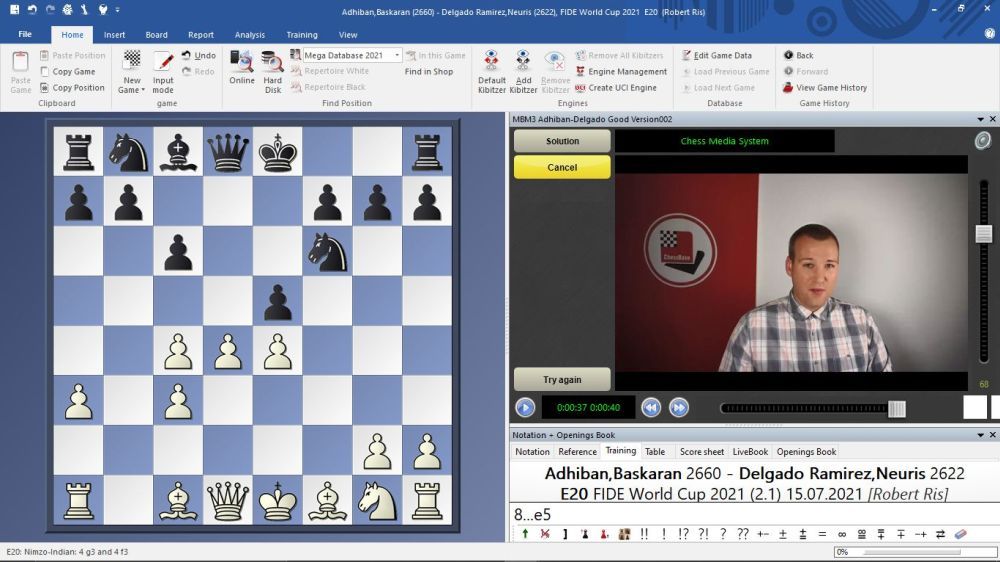 "In the style of Adhiban" is the motto of the interactive training session with Robert Ris. The game Adhiban-Delgado from the World Cup is an instructive miniature in which everything revolves around the initiative and the lead in development. 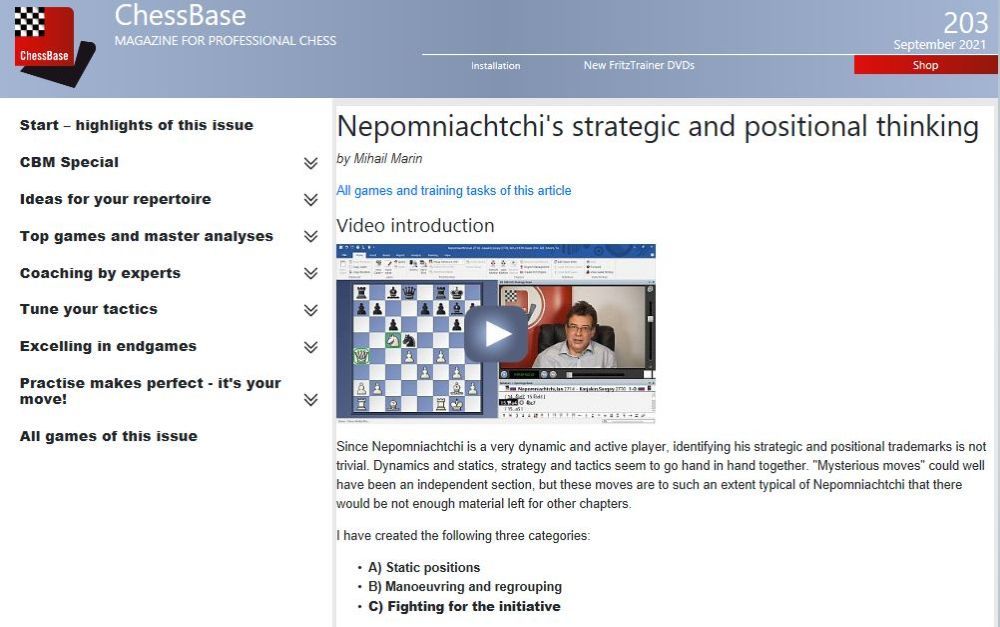 Mihail Marin works out the playing style of the new challenger to the World Championship paying attention to various aspects of his games, and comes to surprising insights. Including a detailed video introduction! 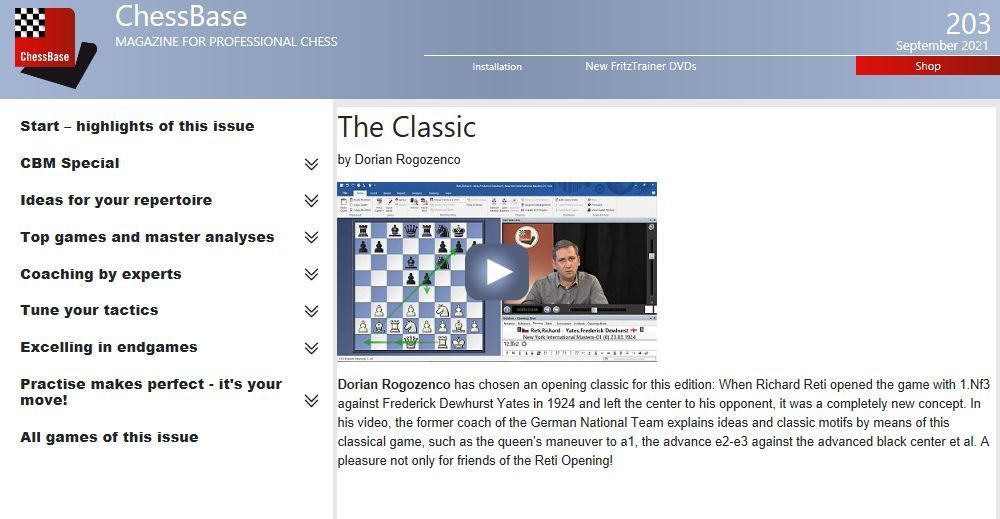 When Richard Reti opened the game with 1.Nf3 against Frederick Dewhurst Yates in 1924 and left the center to his opponent, a completely new concept was introduced into the world of chess. Dorian Rogozenco presents the opening classic in video format and explains the typical Reti motifs. 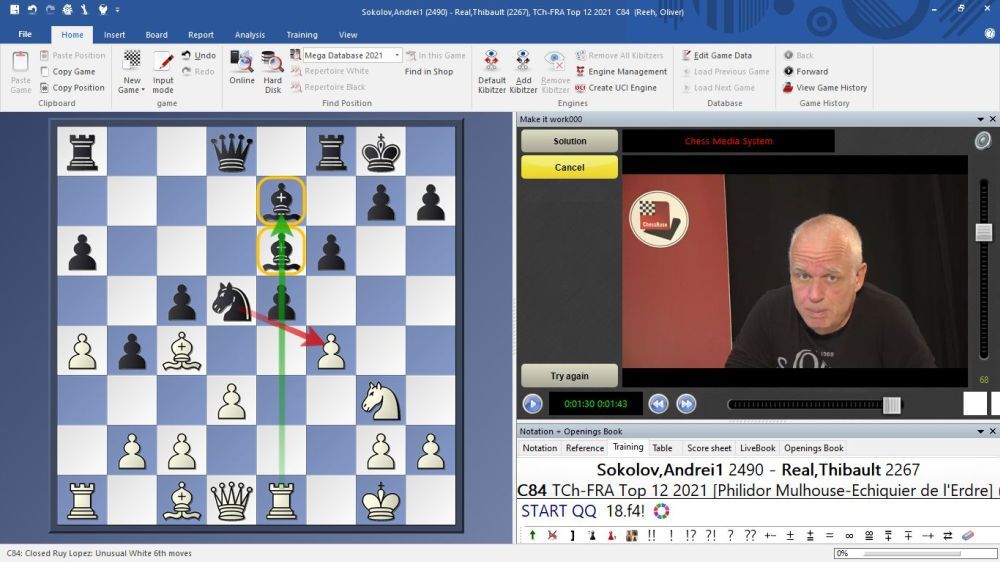 Oliver Reeh's tactics article contains 33 games which include lots of training tasks. Don’t miss the opportunity to solve three of the favorite combinations of the IM from Hamburg in video format!

"Nepomniachtchi's Endgames" and much more 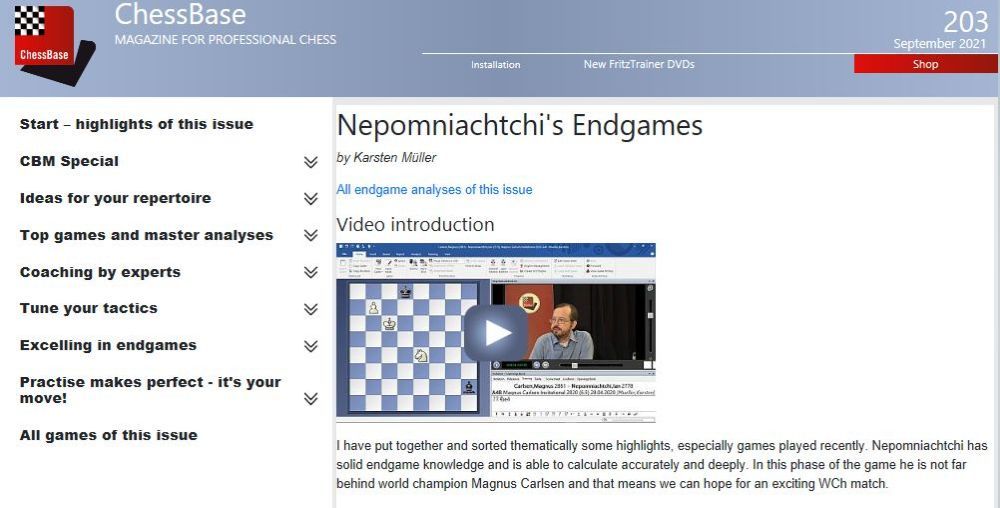 The endgame expert Karsten Müller provides one article about the World Championship challenger, and another one about the highlights from the online tournament Crypto Cup 2021. Plus videos, training exercises and "Readers write".