CBM 191 is out! Now available in the Shop | The sky is the limit! Will Magnus Carlsen break 2900? ChessBase Magazine is the most comprehensive and most sophisticated chess magazine there is. World class players analyze their brilliancies and explain the ideas behind the moves to you, opening specialists present the latest trends in opening theory and offer exciting ideas for your repertoire. Master trainers in the fields of tactics, strategy, and the endgame show you the tricks and techniques a successful tournament player needs! 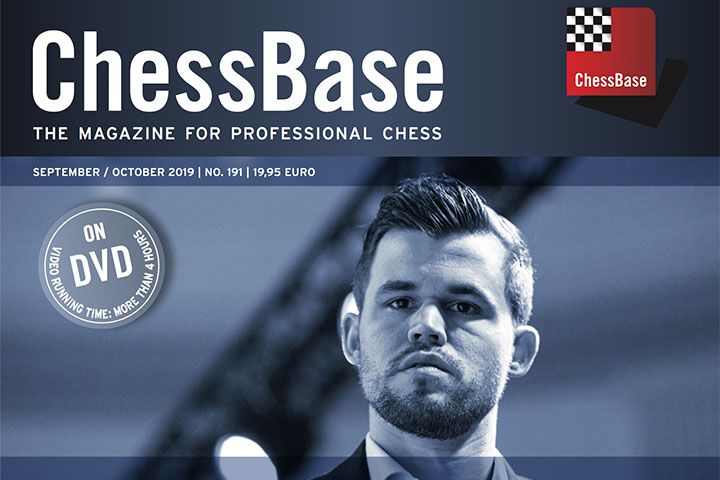 Highlights of this issue

Anish Giri annotates his victory as Black over Ian Nepomniachtchi

Wesley So presents his current recipes for success vs. the Berlin and the Petroff

"I had a strong feeling we were in for a big fight!"

How Adhiban Baskaran came to like Najdorf with 6.h3 e5 7.Nb3

The structure of the champions

Trap expert Rainer Knaak shows a trick against the black stencil ...Nc6, ...Qb6 and ...Bf5 in the London System

A little new trend in the English

Manoeuvre the "Rook on the 3rd" to success — interactive video training with Oliver Reeh! 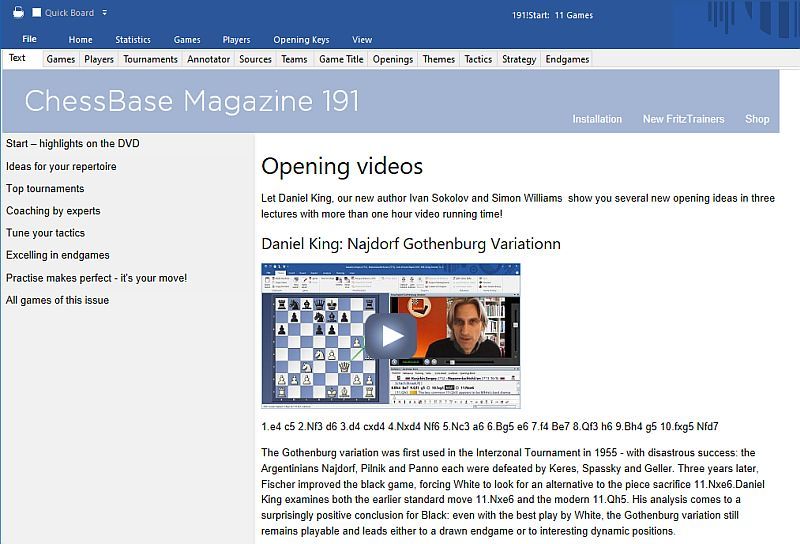 Don't miss Ivan Sokolov's first video for ChessBase Magazine! Starting from the game Carlsen-Yu Yangyi (Stavanger 2019) he presents a new idea against the Slav in the Geller Gambit and explains how to get compensation for the sacrificed pawn on c4 — and possibly more! 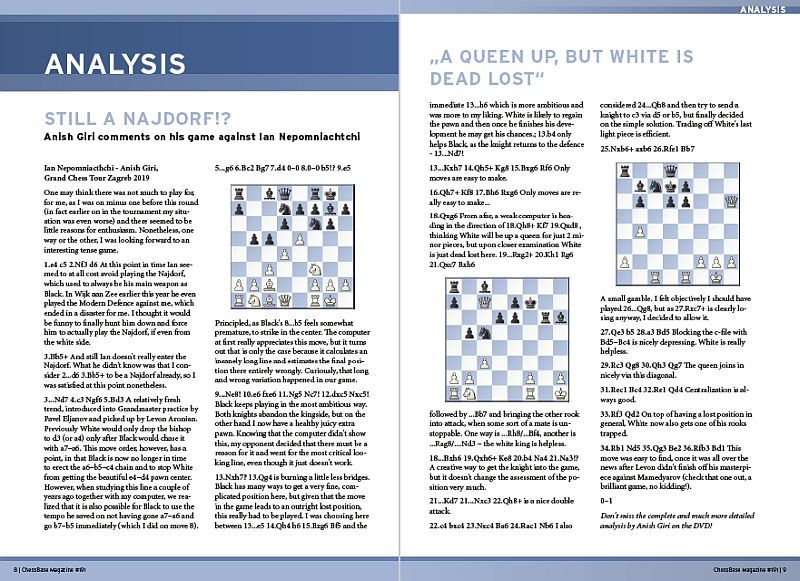 Top players and tournament winners comment on their best games in ChessBase Magazine! Anish Giri’s analysis of his game against Ian Nepomniachtchi can be found in the booklet of CBM #191 on a double page and in full on the DVD, as well as analyses by Fabiano Caruana, Wesley So, Vidit Gujrathi (winner at the Biel Chess Festival), Boris Gelfand (winner of the Netanya GM Tournament), Anna and Mariya Muzychuk, Yu Yangyi, Peter Heine Nielsen, Radoslaw Wojtaszek etc. 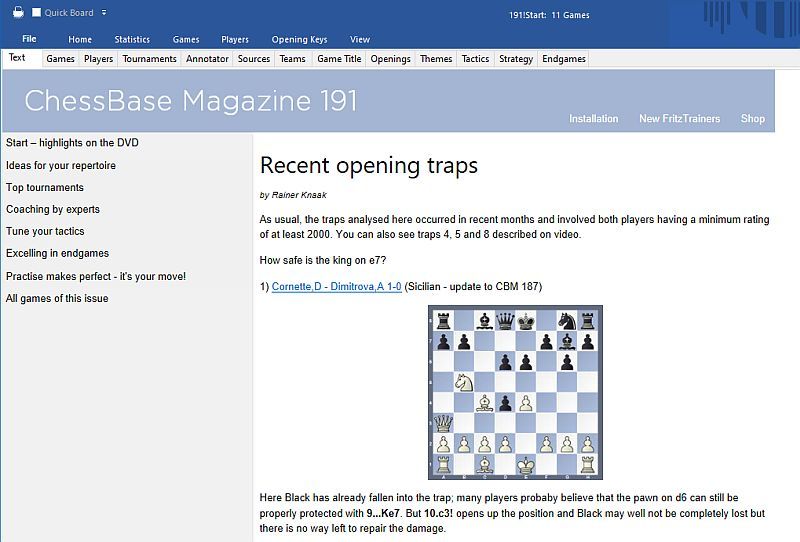 Let our traps expert Rainer Knaak show you eight carefully chosen traps from recent tournament practice. Three of them — one in the Scandinavian, one in the Caro-Kann and one in the London System — are also presented in video format. 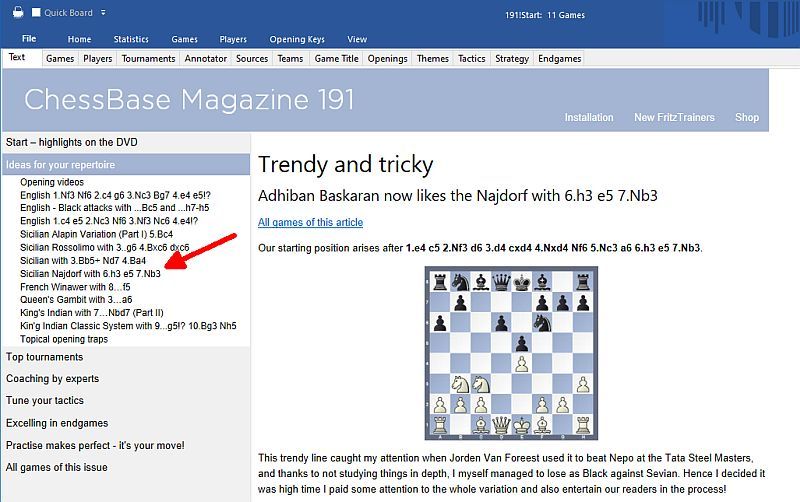 The English Opening and the Sicilian are the main topics of this issue. But our authors also show new and exciting ideas for the French Winawer, the King's Indian and the Queen's Gambit with an early ...a6. Simply load the article of your choice from the menu on the left, eg. Adhiban's article on the trendy Najdorf with 6.h3 e5 7.Nb3! 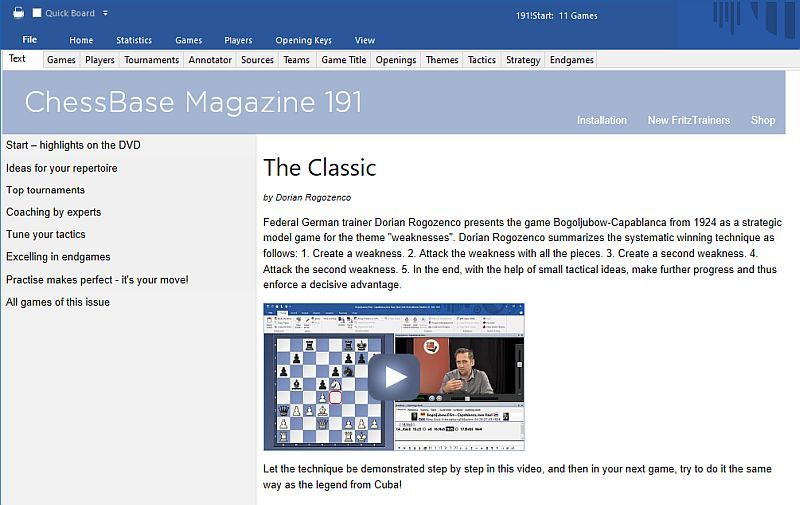 The classic game Bogoljubow-Capablanca from 1924 is presented to you by the trainer of the German national team as a sample game on the subject of “weaknesses”. Let Dorian Rogozenco demonstrate the squeaky clean technique deployed by the masters. 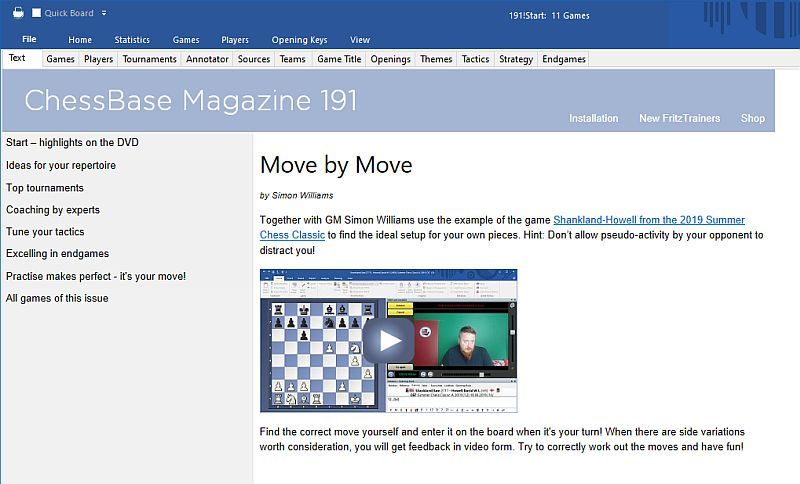 Together with GM Simon Williams use the example of the game Shankland-Howell from the 2019 Summer Chess Classic to find the ideal setup for your own pieces. Hint: Don’t allow pseudo-activity by your opponent to distract you. 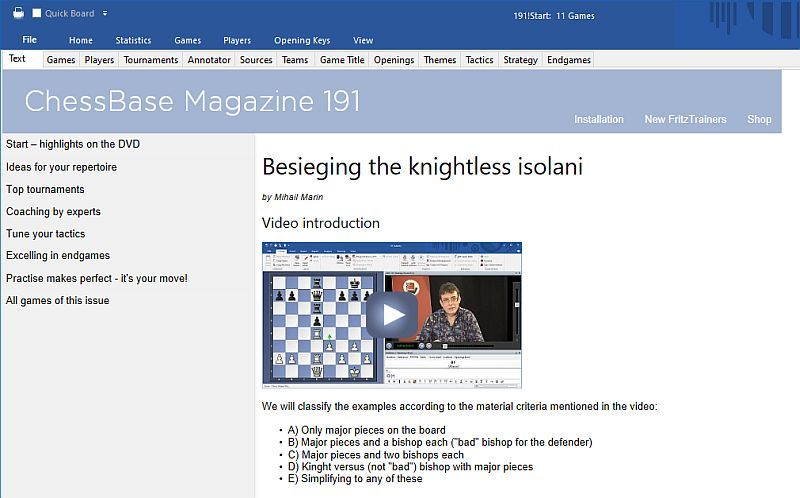 How weak is the isolani when there are no more knights on the board? What is the role played by the presence of bishops? Strategy expert Mihail Marin investigates various distributions of material and presents both winning methods and ways to defend.

Tactics — "Cooperation is everything" 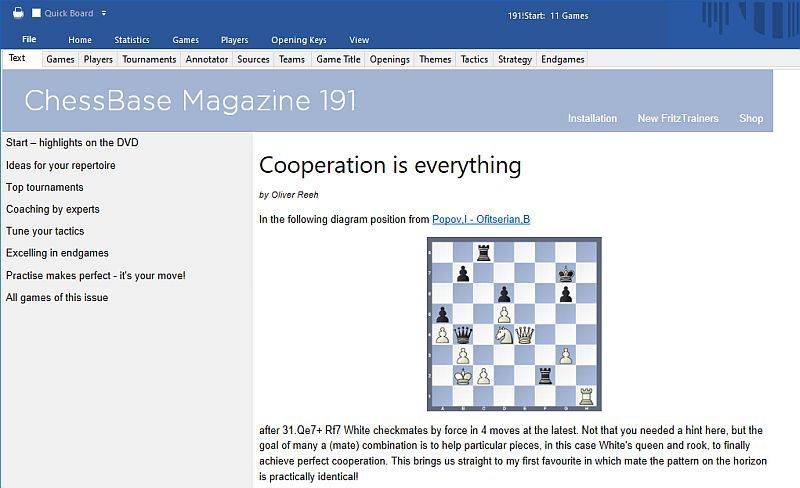 Oliver Reeh's tactics selection contains 27 recent games, each of which contains at least one training question. In addition, he presents his three favourite combinations in our interactive training format with video feedback! 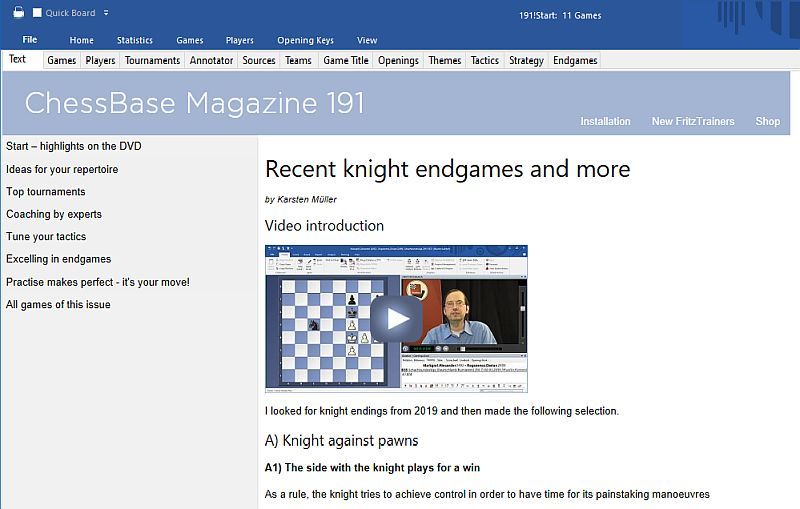 Karsten Müller presents a varied selection of knight endgames, starting from the struggle of “knight against pawns” via classic knight endings with and without extra pawns all the way to curious endgames in which knights had a (not always happy) role to play. Plus video training with a total running time of over an hour!