A valiant Vishy in Eindhoven

The fifth round of the ongoing Tata Steel Chess Tournament was played in a new venue in Eindhoven yesterday and became witness to a sparkling performance by the five-time World Champion Vishy Anand. Vishy's mammoth experience proved too much for his young and talented opponent Jeffery Xiong of the United States who ventured to surprise him with an unusual move in the French Winawer. Elsewhere, Alireza Firouzja too got back in his form and shocked Anish Giri in a tricky rook-pawn ending. In the Challengers group, as many as six games ended decisively. Nihal Sarin suffered his first defeat in the hands of Lucas Van Foreest, while Surya Shekhar Ganguly was held to a draw by David Anton Guijarro.

For round five of the ongoing Tata Steel Chess Tournament 2020 the players travelled to Eindhoven, the "Chess on Tour" destination this year, and played their games in the Philips Stadium, the home ground of the PSV Football club. The 15th of January was scheduled as a rest day so the players found the time to spend some time away from chess and rejuvenate themselves. 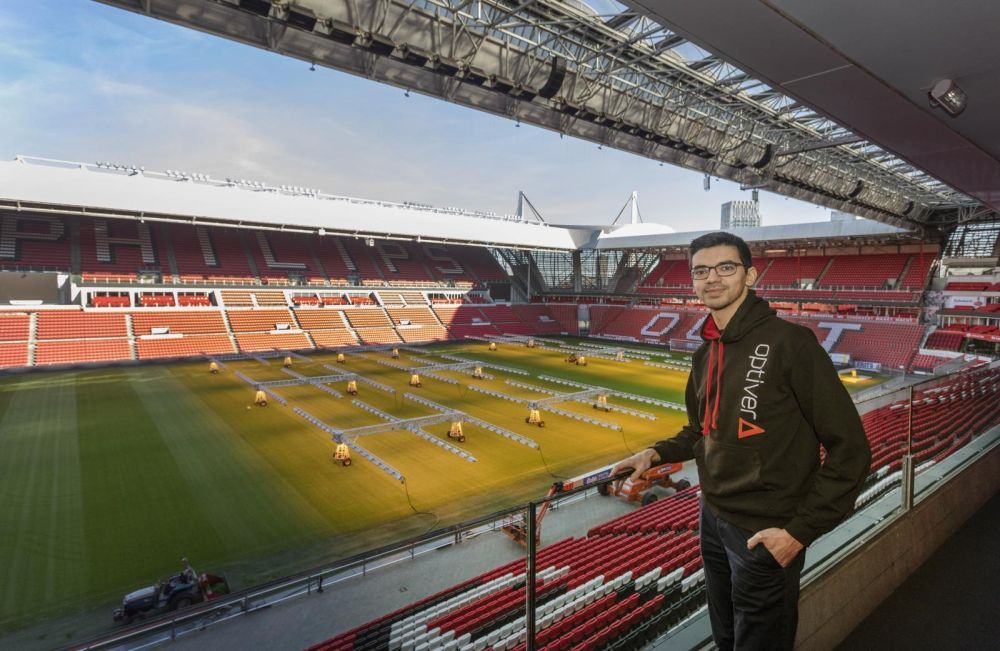 Anish Giri posing before the camera in the massive Philips Stadium in Eindhoven | Photo: Jurriaan Hoefsmit 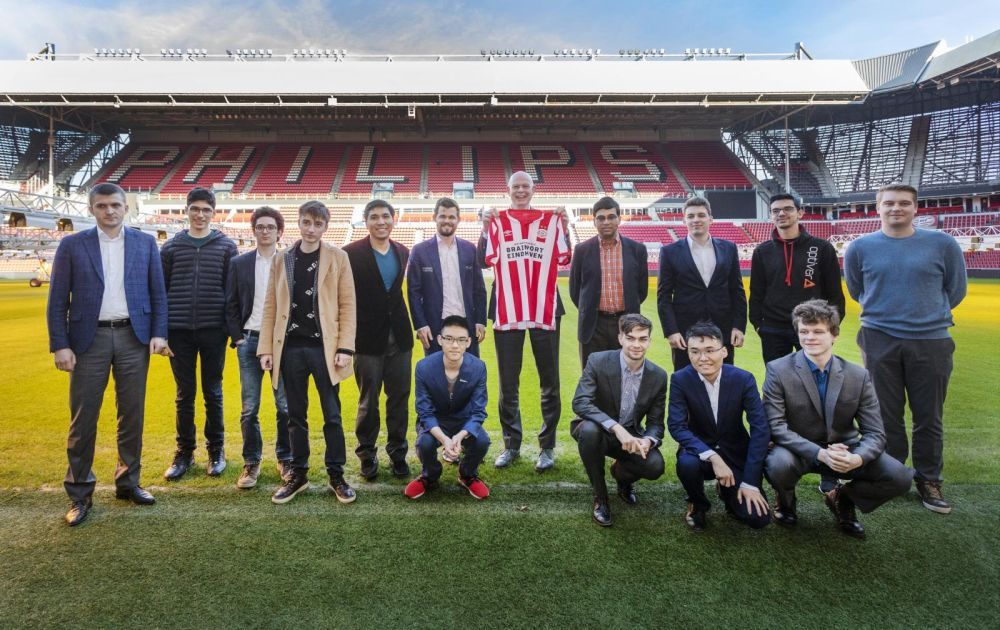 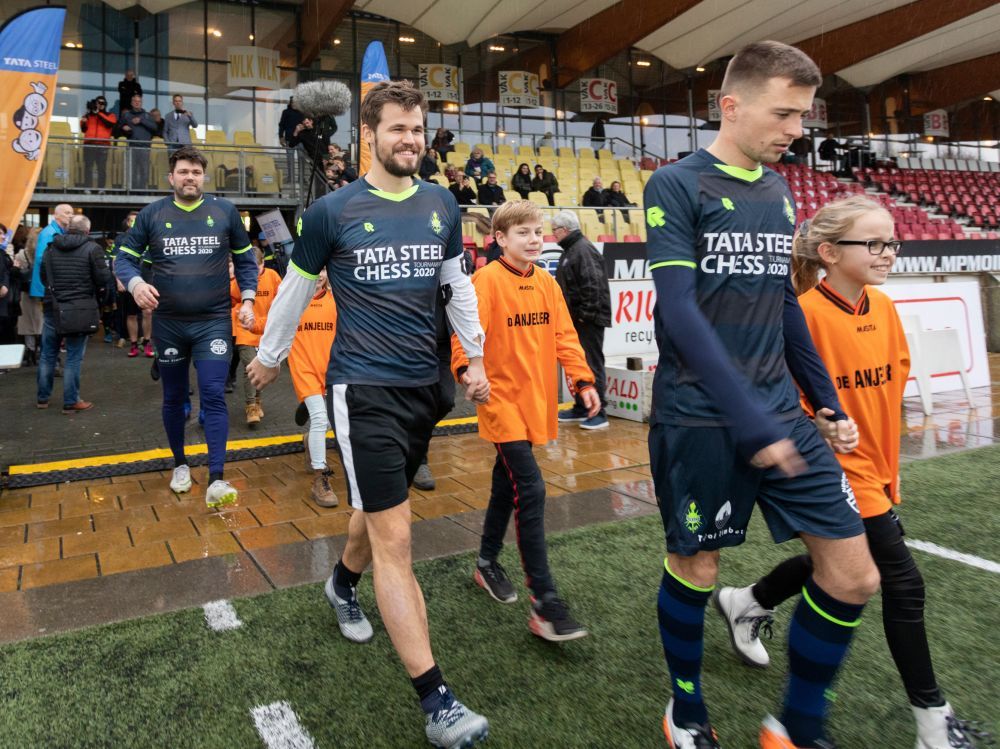 The rest day also saw some of the Masters indulge in a friendly game of soccer at the Telstar Stadium where the World Champion Magnus Carlsen and Loek van Wely became the team captains | Photo: Tata Steel Chess 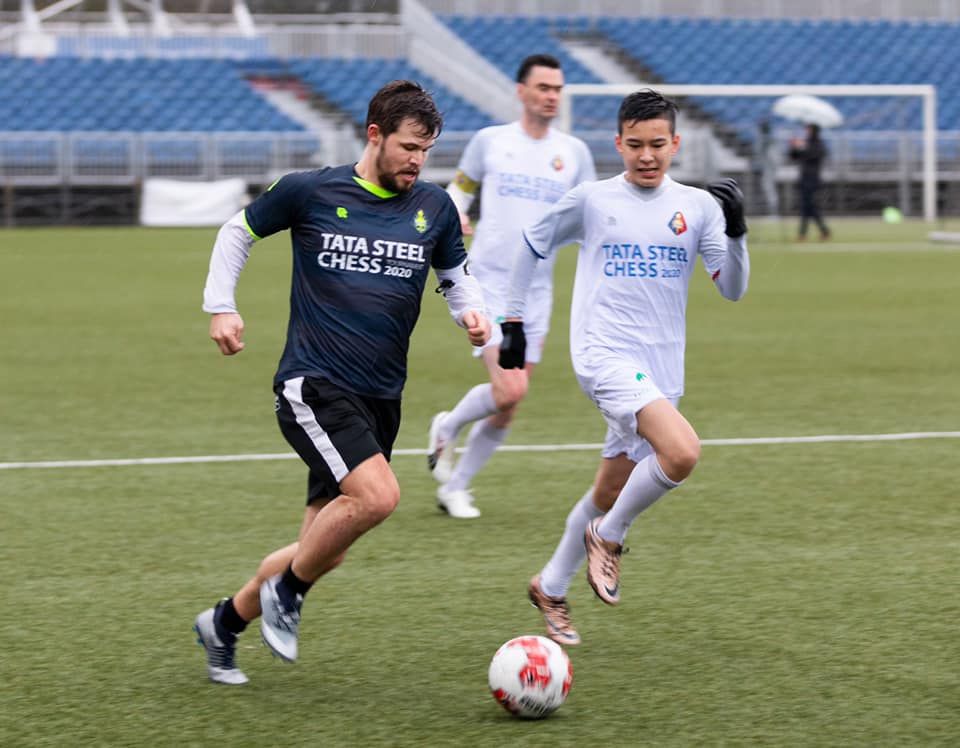 Chess wise the fifth round witnessed quite a few interesting encounters in both the Masters and Challengers groups. Five-time World Champion Vishy Anand, who was having a lacklustre event back in Wijk Aan Zee, returned very strongly in Eindhoven after the day of rest on 15th and defeated the talented American prodigy Jeffery Xiong in a crushing manner. Elsewhere, Alireza Firouzja got back his form and outplayed Anish Giri in a rook pawn ending to join Wesley So in the lead. And in the Challengers, as many as six out of seven games ended decisively. Nihal Sarin suffered his first defeat of the tournament in the hands of Dutch champion Lucas Van Foreest, while Surya Shekhar Ganguly was held to a draw by David Anton Guijarro with black pieces. 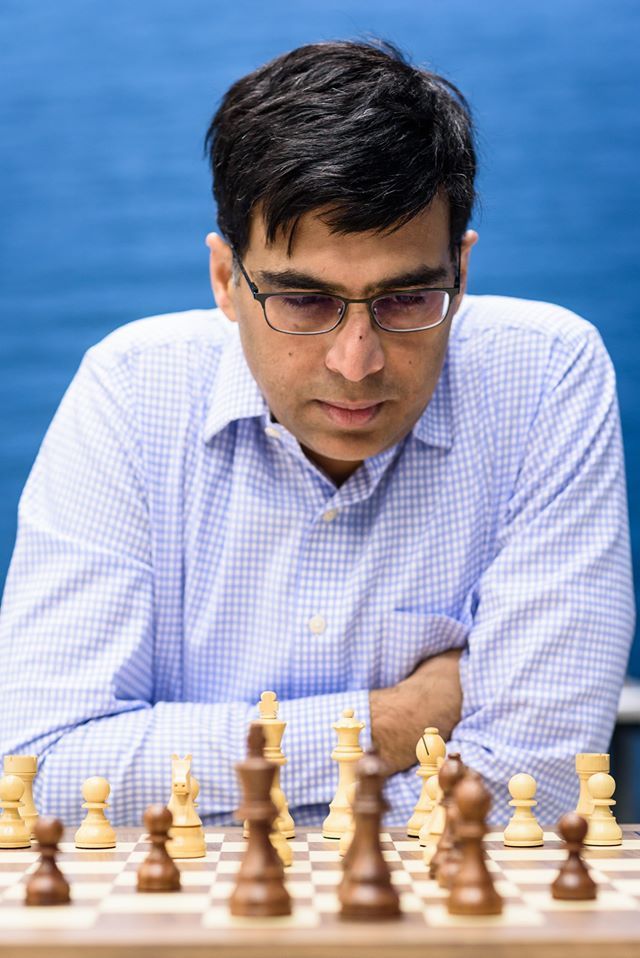 With his emphatic win against Jeffery Xiong, Vishy has revived his chances in the event and now has a score of 2.5/5 points. In the game yesterday, he evinced his intentions right off the bat when he unhesitatingly went into the mainline Winawer against Jeffery's French. With 7.Qg4 it was clear that the Madras Tiger was out for some blood. 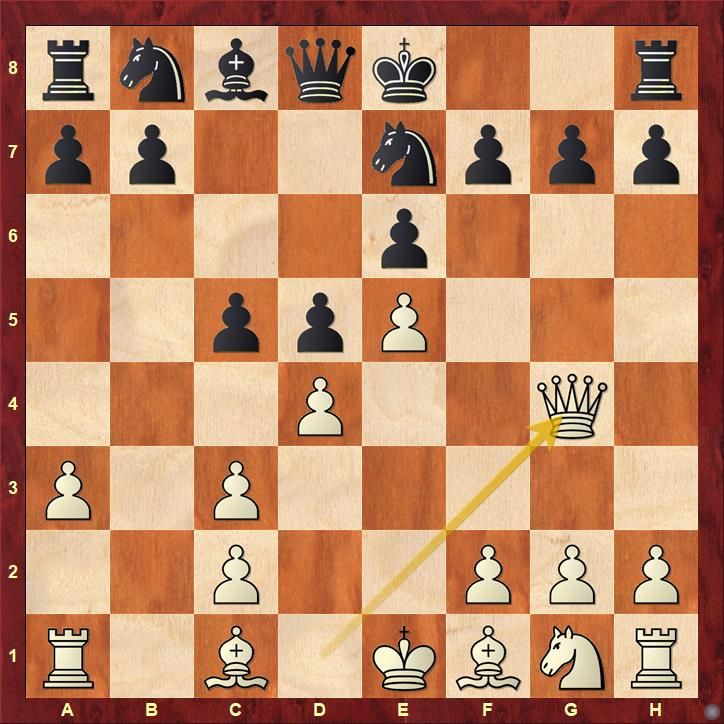 There are calmer ways to opt for in the above position but 7.Qd1-g4 hitting the g7 pawn is by far the most testing continuation that leads to some very complex and double-edged play. Vishy's choice certainly reflected the confidence that he has in his preparations. 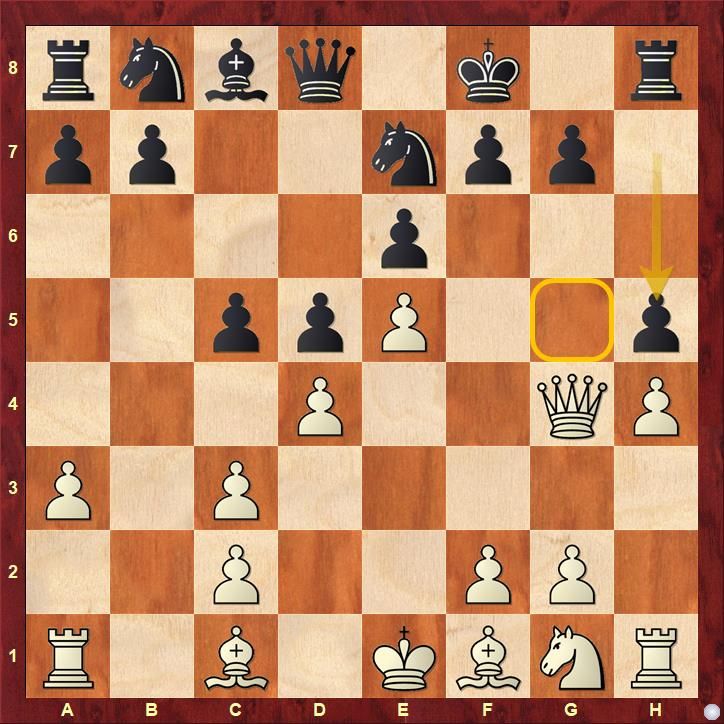 Jeffery however was quick to surprise with 8...h5

The move 8...h7-h5 indeed looks quite reckless for it makes the g5 square an obvious target to hit at. The online database shows only four games played in this line and none of them are from Grandmaster play! It has to be said that the American came up with a pretty rare choice here if not a dubious one. 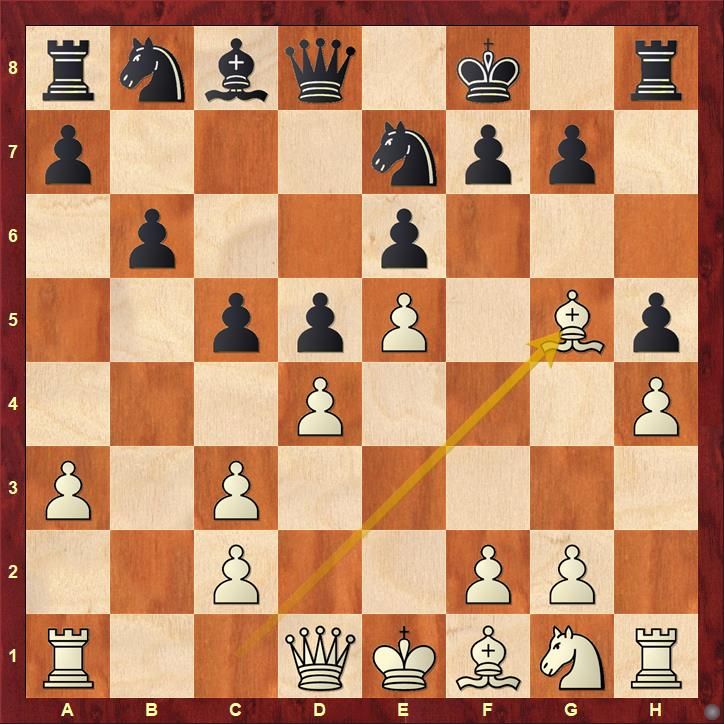 Vishy played on in his characteristic principled style and took control of the weak g5 square without any delay. 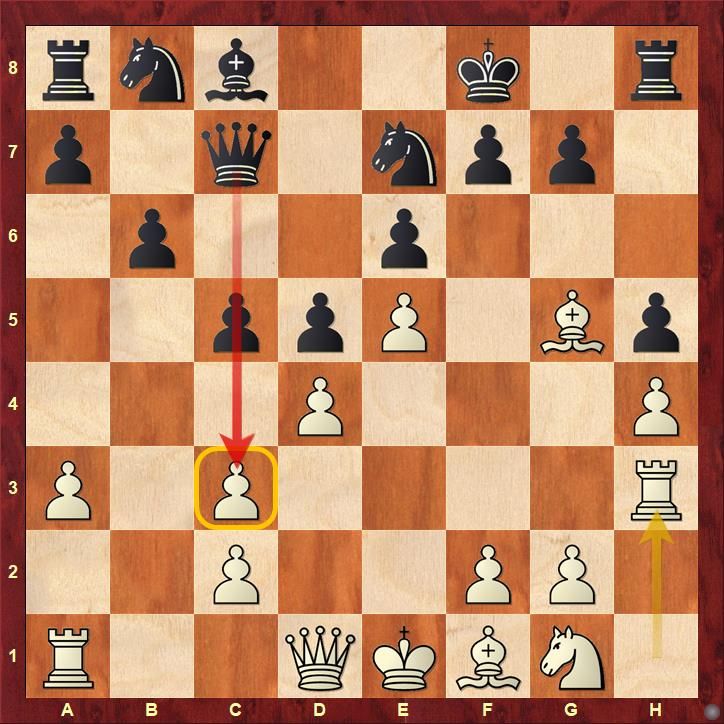 Next came a nice little rook lift with 11.Rh3. Note that the rook not only defends the third rank but also opens up the possibility of launching an attack along the f and g files.

Even though it appears as if Black has made some concessions, the position was probably still roughly equal at this point. The usual plan here for Black would have been to go 11...Nf5 putting more pressure on the d4 square or perhaps 11...Ba6 just getting the light-squared bishops exchanged, but in the game Jeffery played 11...cxd4. The objective evaluation actually started to shift in White's favour only after this, the simplification in the center made it easy for White to commit himself on the kingside. 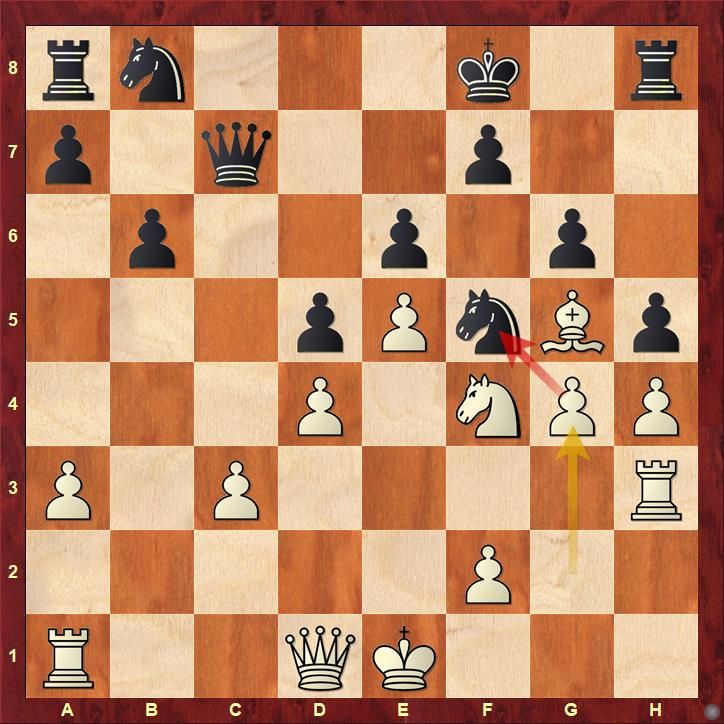 Consequently, the g2-g4 break came not long after. With the c3 square well defended by the rook on h3, White didn't have to worry about any serious queenside invasion. 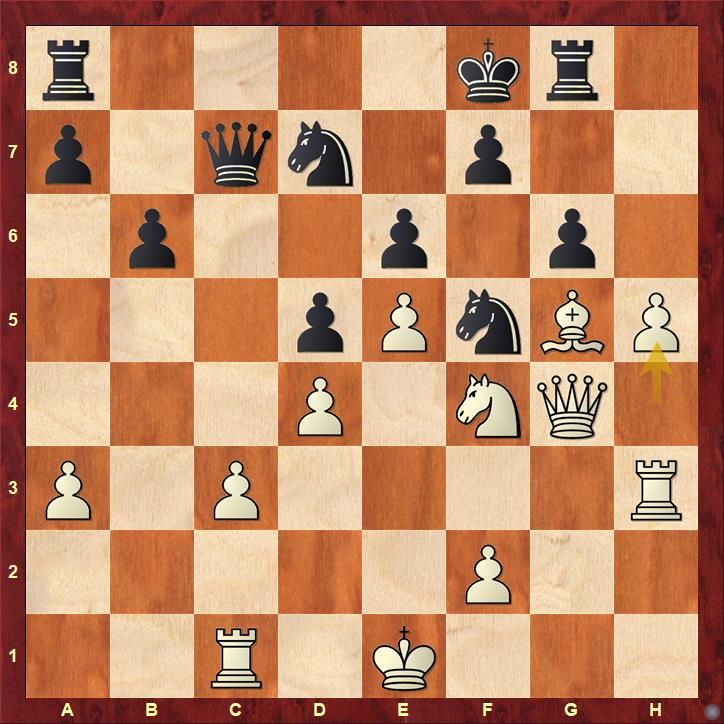 20.h5 followed next intensifying the attack! Note that c3 is now defended by the rook on c1 so that Rh3 can now participate fully in the kingside onslaught. 23.Rf3! with the idea of going Ng3 and hitting f7 next looks like the the kind of move that takes the last hope away from Black! But Jeffery here proved his resourcefulness and held the position together with 23...Rc6! 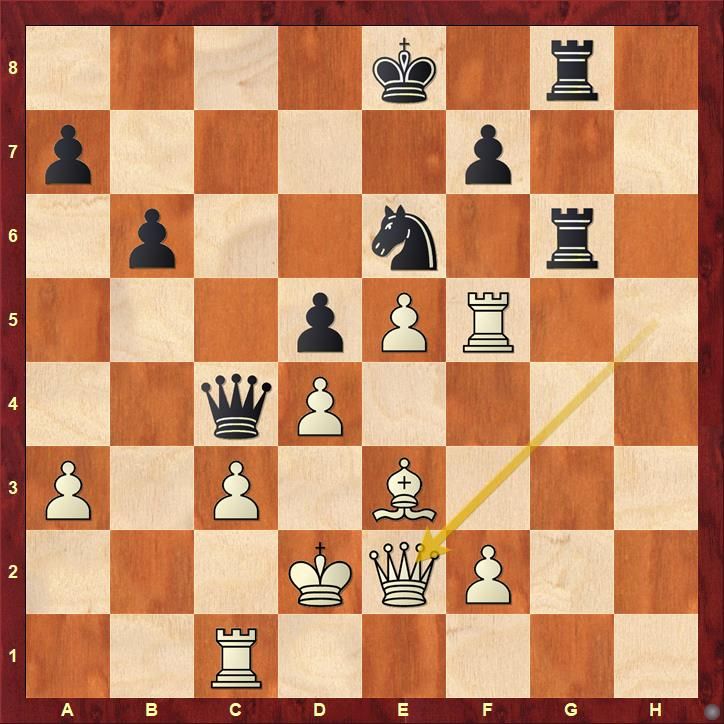 Thus, White soon had to switch strategies. He was already a pawn up and just wanted to liquidate into a winning ending, hence came 29.Qe2 - the offer of a queen trade. 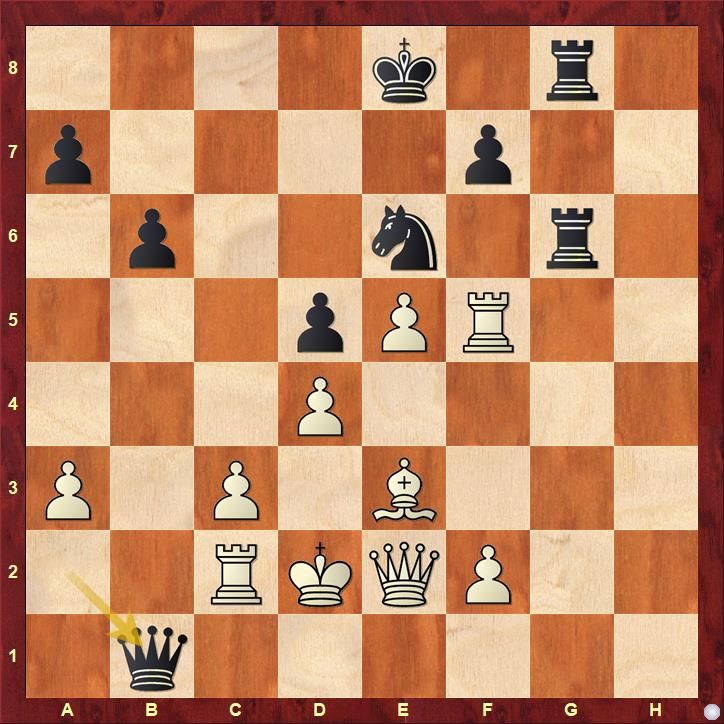 Jeffery of course wanted to fight on and keep the queens on board but 30...Qb1 was a serious mistake. Can you guess the fine blow that Vishy executed here? 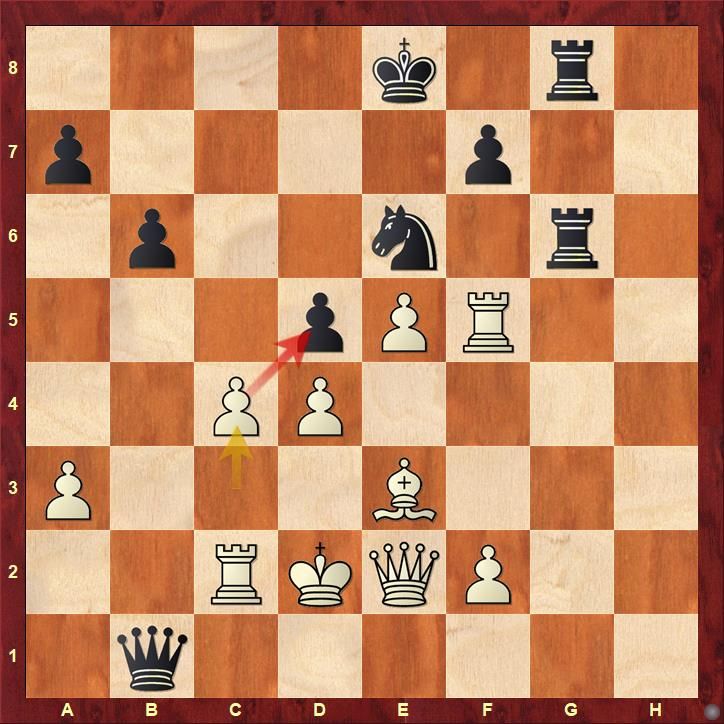 Well, 31.c4! was the decisive final nail in Black's coffin! Now White was about to force his way into Black's camp! 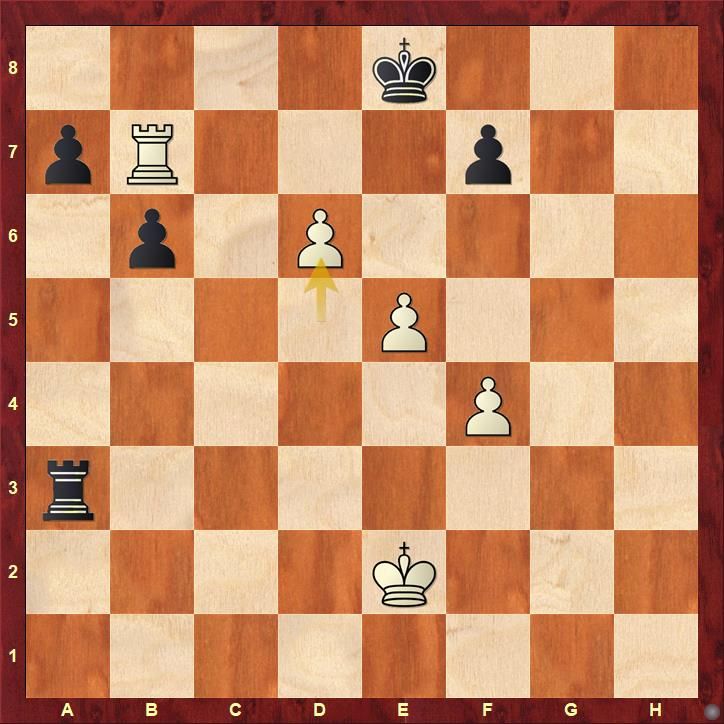 The above was the final position on board when Black resigned. With the rook controlling the seventh rank, there's no way the white pawns can be stopped from queening. It was a near perfect game by the former World Champion! 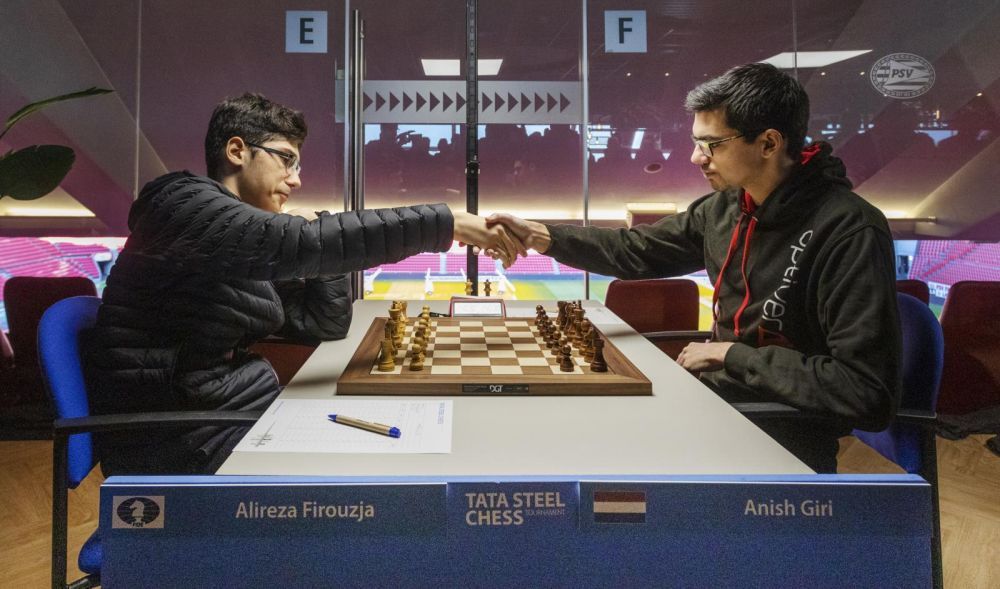 Alireza proved once again with his fifth round victory against Anish Giri that he his truly capable of taming elite level opposition. Starting off with a Queen's Gambit Declined Semi-Slav it was a rook-pawn ending that proved critical in this encounter. Let's now have a look at what happened here. 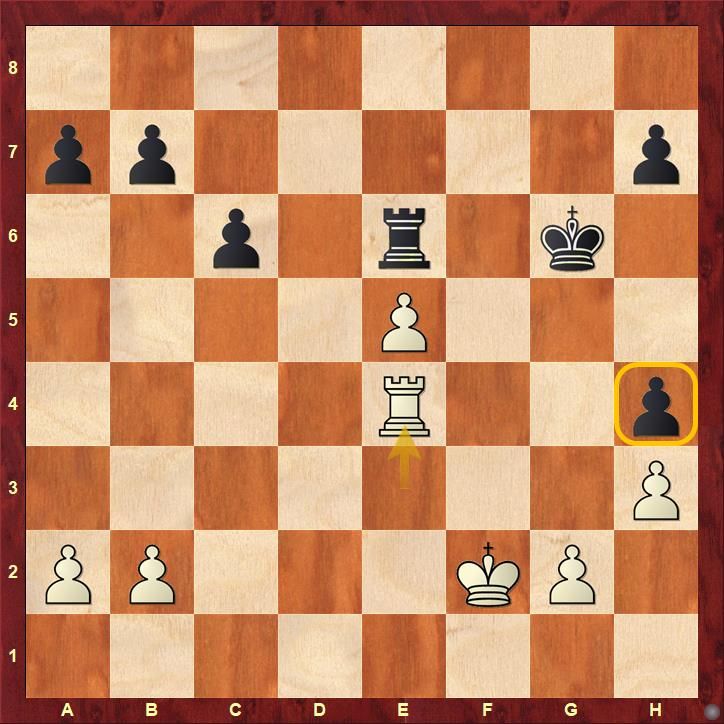 The above is a tricky situation for Black. His h4 pawn is a soft spot that White wants to hit at and Kf5 isn't really possible as after Rxh4 Kxe5 Rxh7 all of black pawns become vulnerable. Anish played the move 39...Re7?! here, can you do better? 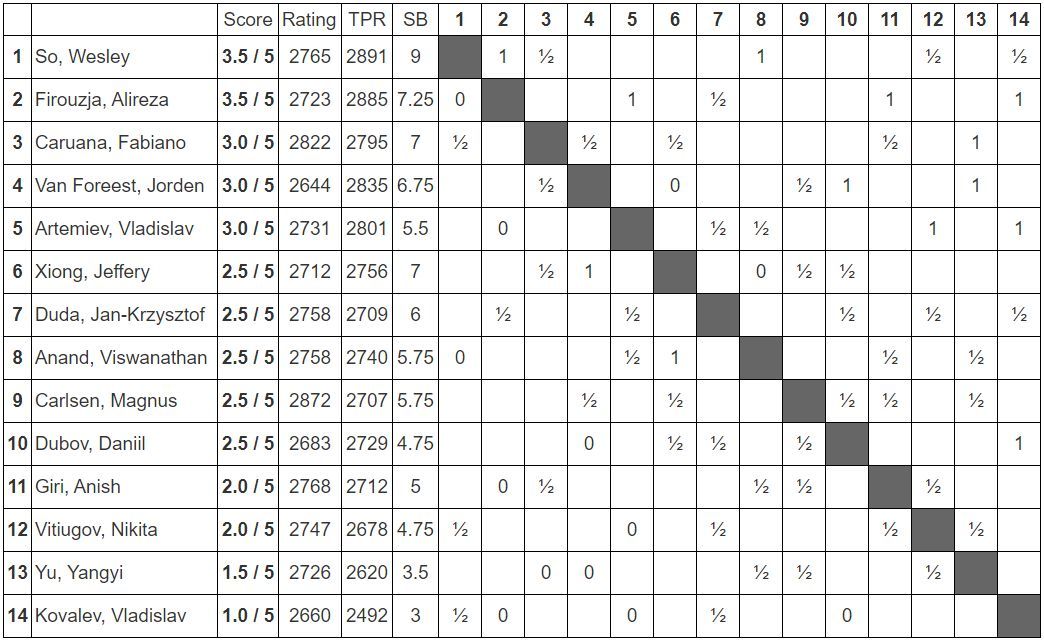 Standings of all Masters after five rounds.

Among the Challengers too the fight for the top place is getting tougher with each passing round. After five rounds three players - Pavel Eljanov, Surya Shekhar Ganguly, and Erwin L'Ami - lead the field with 3.5/5 points each. Yesterday, six out of seven games ended decisively, and Ganguly versus Guijarro was the only encounter to finish in a draw. 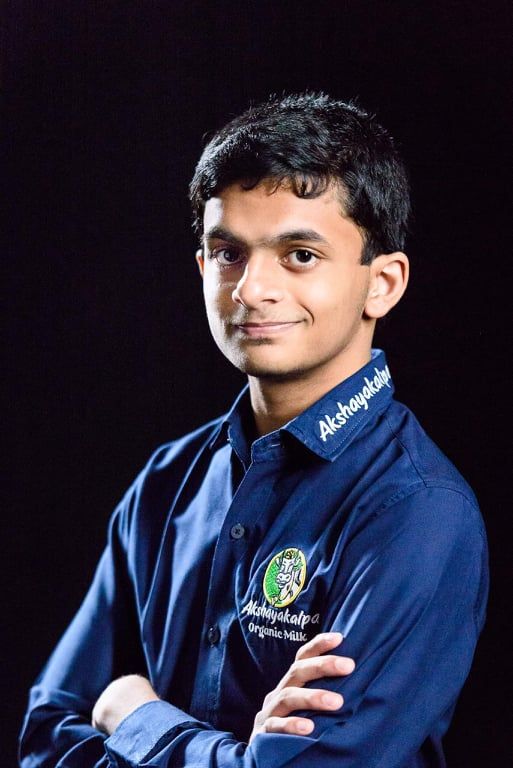 After making a solid start in the event, Nihal Sarin suffered his first defeat in the hands of Dutchman Lucas Van Foreest in round five yesterday. Nihal made an inaccuracy on move 21 which allowed his opponent to grab much space on the queenside and take charge of the game | Photo: Alina l'Ami 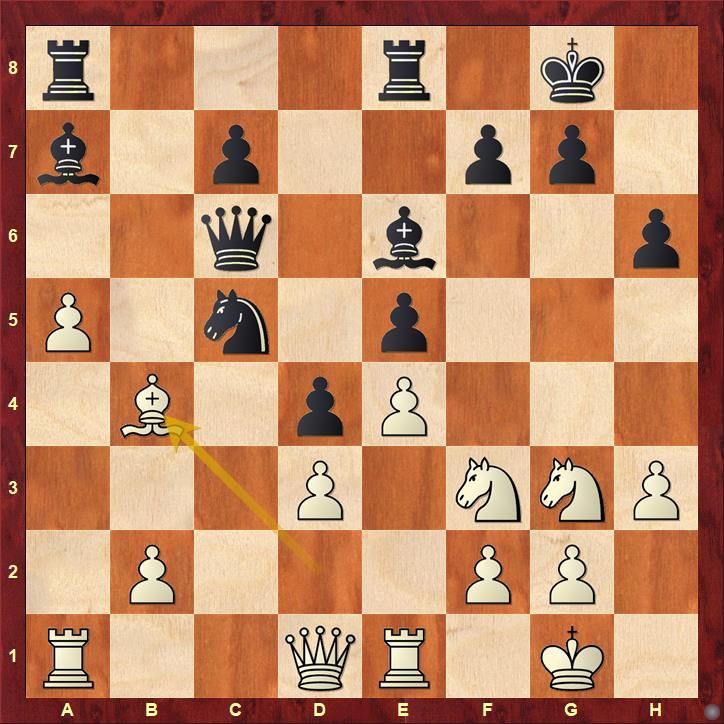 Instead of capturing the e5 pawn which should have given him a comfortable edge, Nihal captured on b5 and this allowed Lucas to slowly start dominating the queenside starting with 21...Nb3 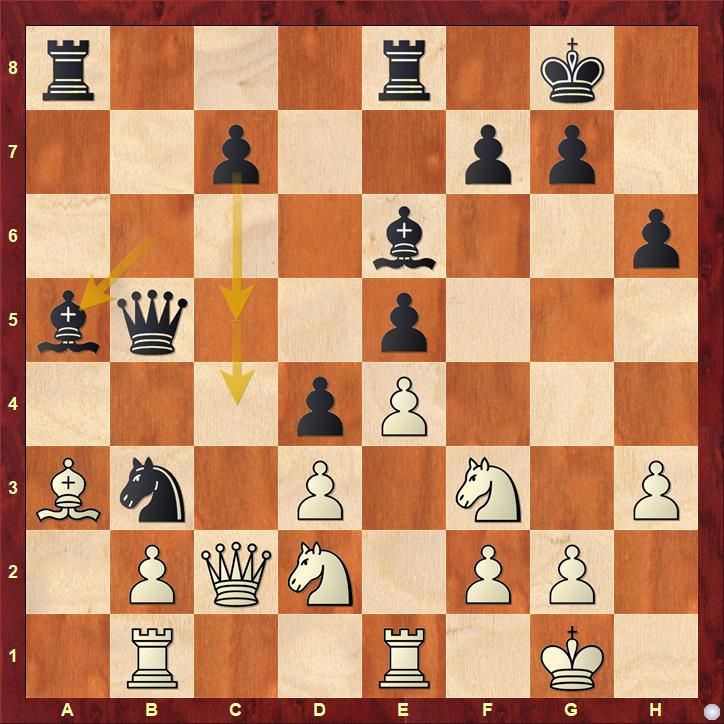 A few moves later, Black had this simple but effective plan of rolling the c-pawn down the board. 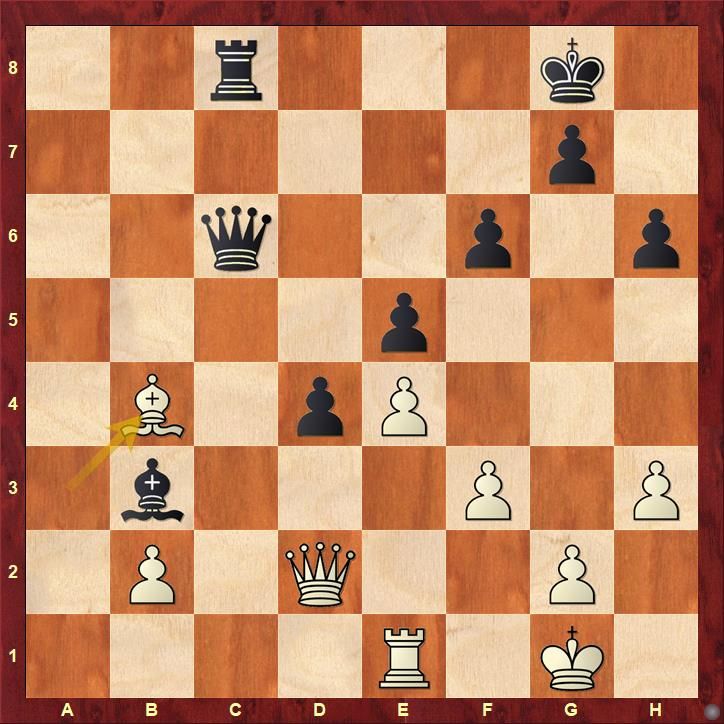 Fast forward a few more moves, Nihal made the decisive blunder with 38.Bb4 ... Can you see what he missed? Check out the full game below to know the answer. 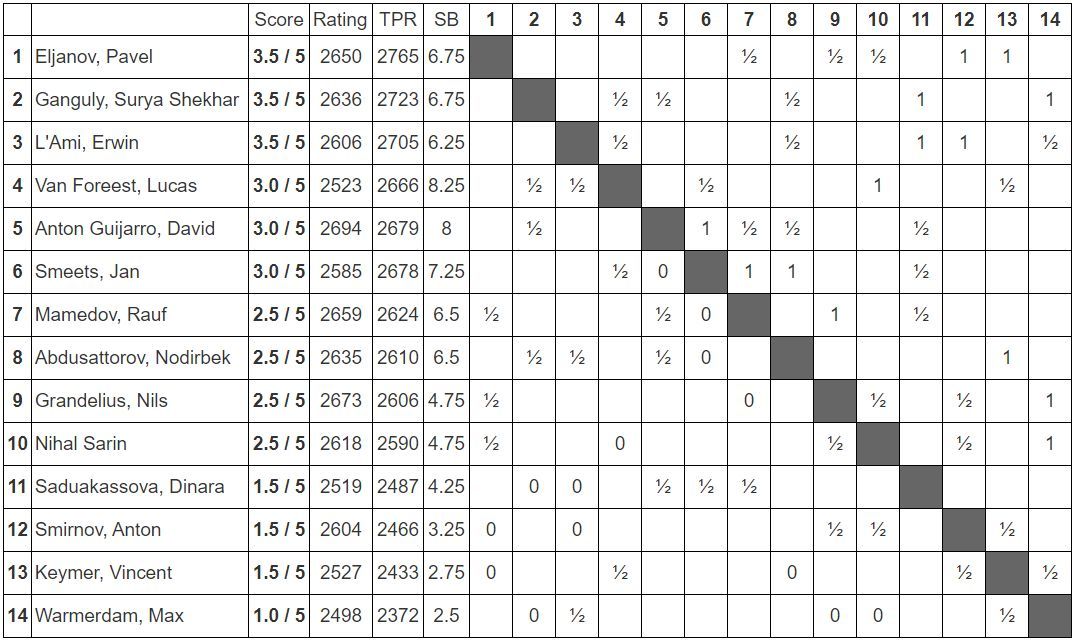 Standings of all challengers after five rounds.

The sixth round will be played in the main venue of Wijk Aan Zee today and following are the pairings: