Top seed of the tournament Praloy Sahoo scored an unbeaten 6.5/7, finished a half point ahead of the competition and won Tata Steel Chess Festival All Bengal under-16 Rapid. That's not all, he had a big moment which still feels like a 'dream' to him as he made the inaugural first move on the board of Anand-Carlsen match of Tata Steel Chess India 2019 Rapid round 7. Five other champions were crowned in under-8, 12 and 16 age group in both boys and girls category. Souhardo Basak, Rajoshnish Bhattacharjee, Debapriya Manna, Arhashirsha Biswas and Anwesha Sinha are the winners in various age group categories. Total 193 players from various parts across the state of West Bengal participated in this event. Chief Guest GM Neelotpal Das distributed the prizes. Photo: Shahid Ahmed 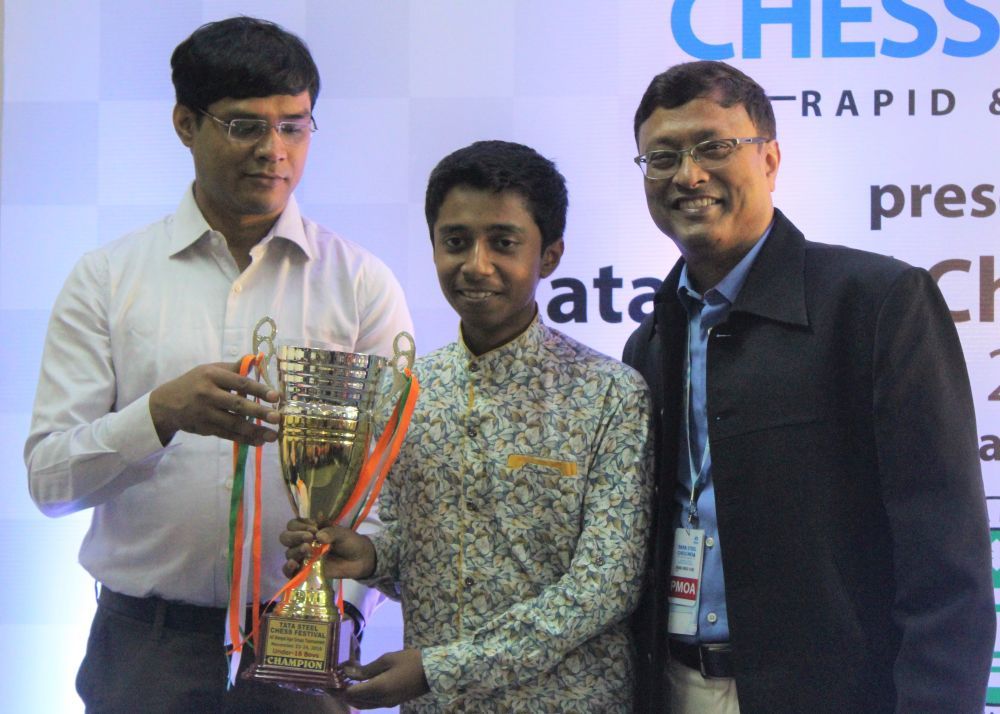 Reigning West Bengal State Sub-Junior champion and National Schools under-15 runner-up Praloy Sahoo started out the tournament as the top seed and scored an unbeaten 6.5/7. He finished a half point ahead of the competition. But that was not all, he had a big surprise waiting for him. 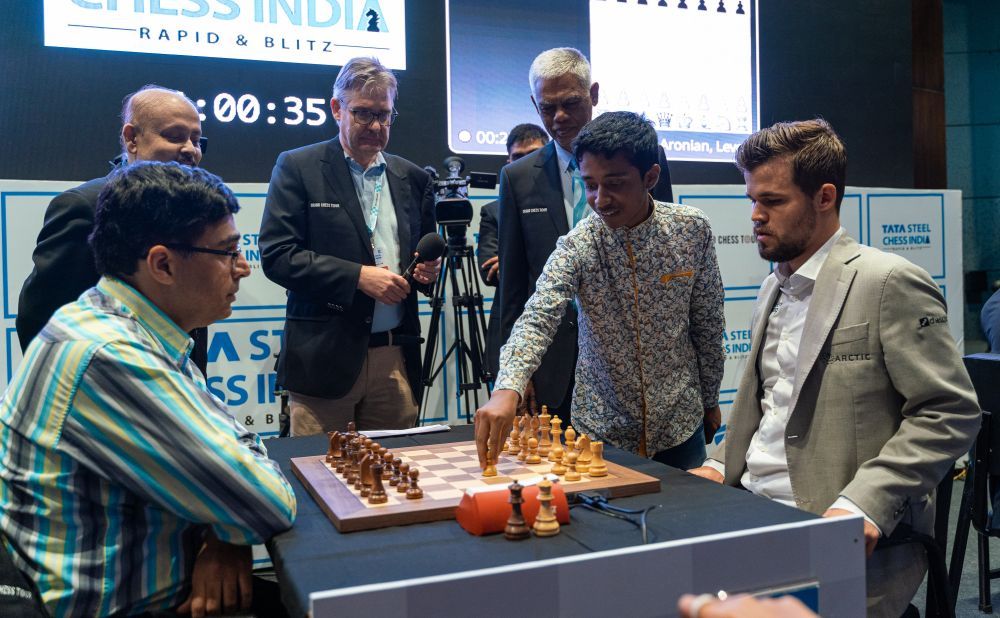 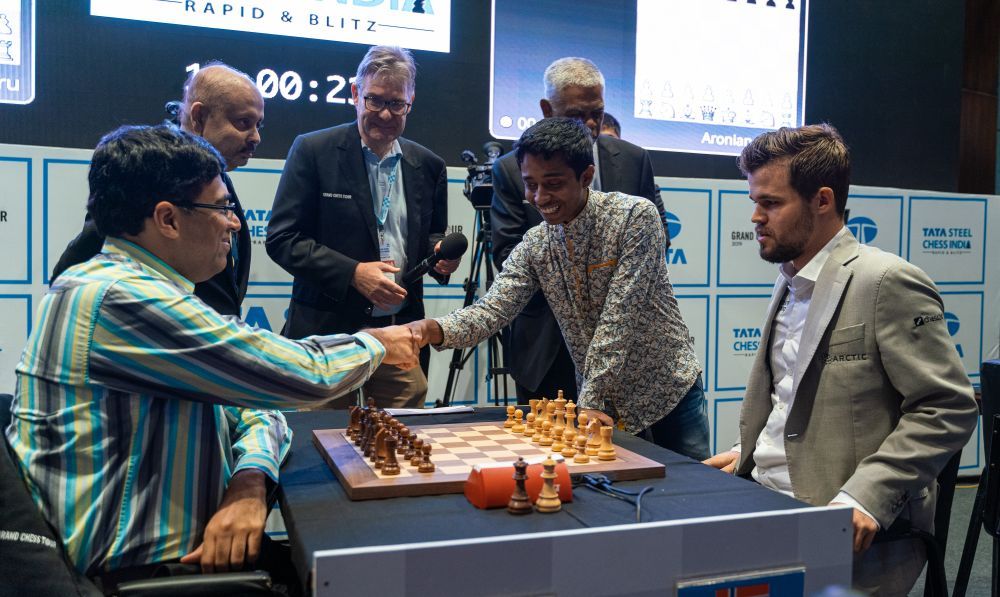 He also made a handshake with both Vishy and Magnus | Photo: Lennart Ootes / Grand Chess Tour

Round 7 inaugural move was made by Praloy Sahoo | Video: Sagar Shah 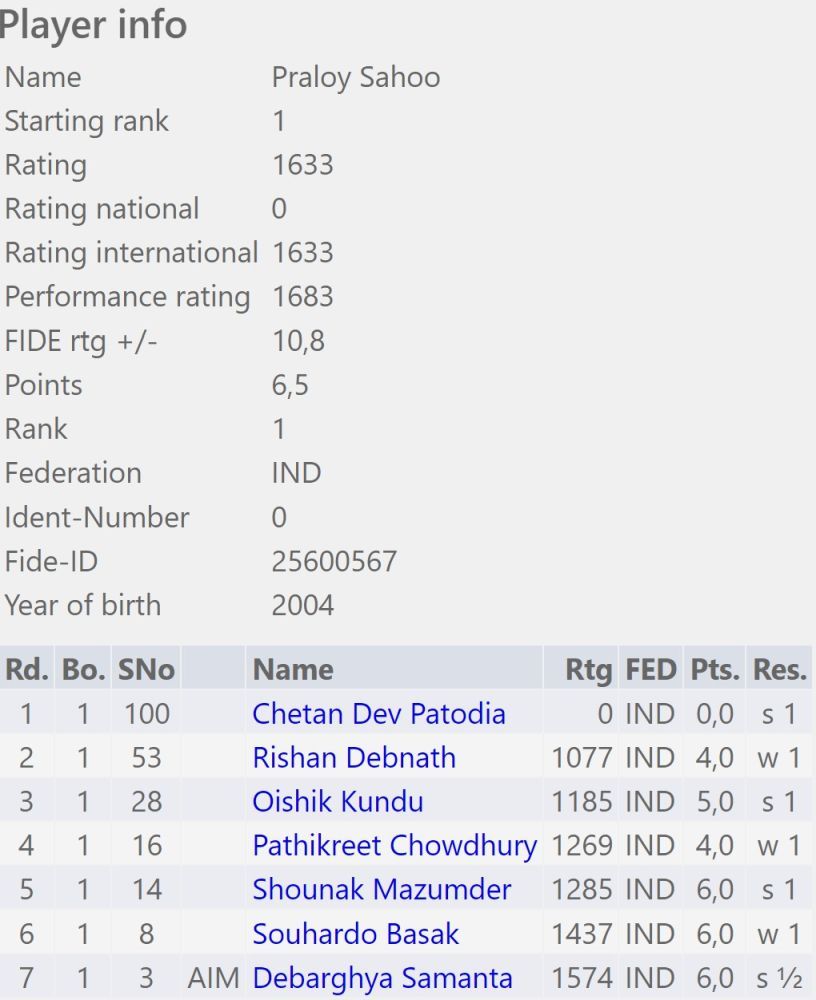 This is what he had to say when I asked him what did he feel when he got to know that he will make the first move on Anand-Carlsen match, "I thought an unimaginable dream is coming true. I got to know that I will get to make the first move and shake hands with both of them. Sumit Roy told me first that there is a surprise for you, after I won the tournament. Dibyendu Sir told me that I will go to the Anand-Carlsen board and do the first move. I was feeling quite nervous when I went there. I was told to play c4 or e4 as Carlsen plays them, I could not understand properly, so I played 1.c4. The pen I received from Carlsen, I have kept it safe and of course I won't use it. I made a mistake, I should have taken their autograph at that time. I got starstruck by seeing Carlsen so I mistakenly returned the pen I received from him. This is bigger than the trophy, it still feels like a dream."

However, the tenth standard student of Santragachi Kedarnath Institution's chess career may come to an abrupt end as his father says, "I make a meager amount of earnings. It is becoming difficult for me to continue taking him to various chess tournament. I am not sure how long I will be able to continue this." 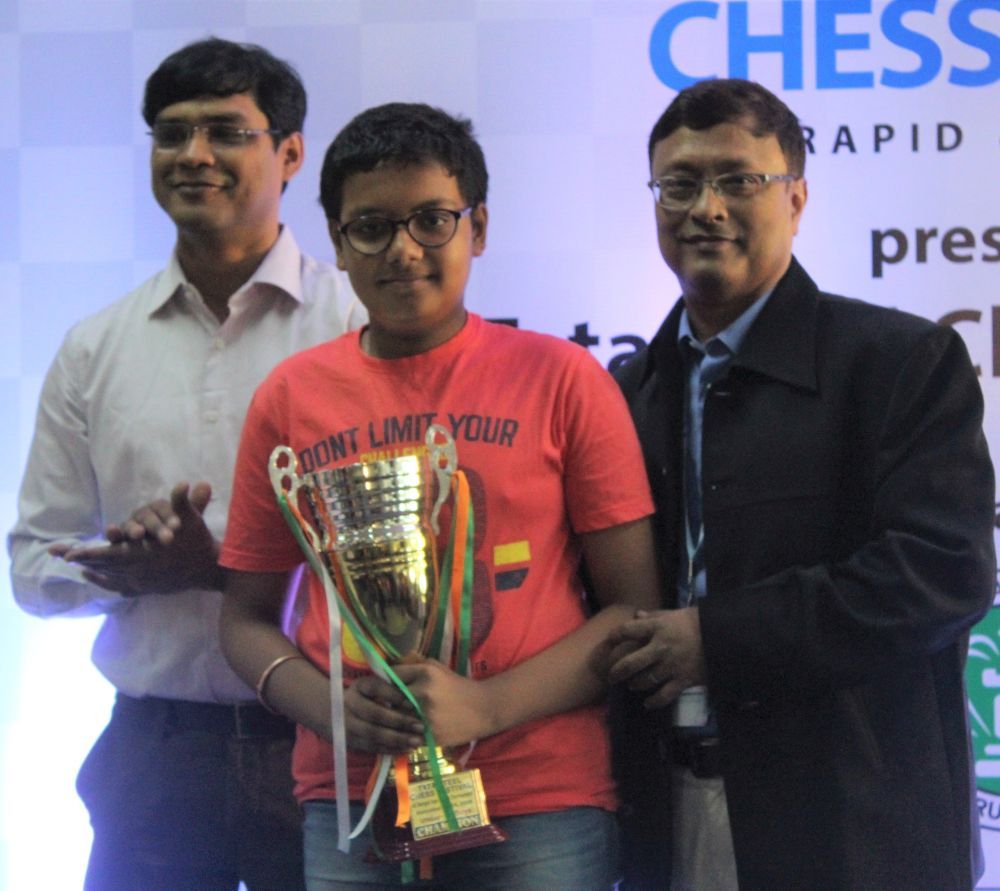 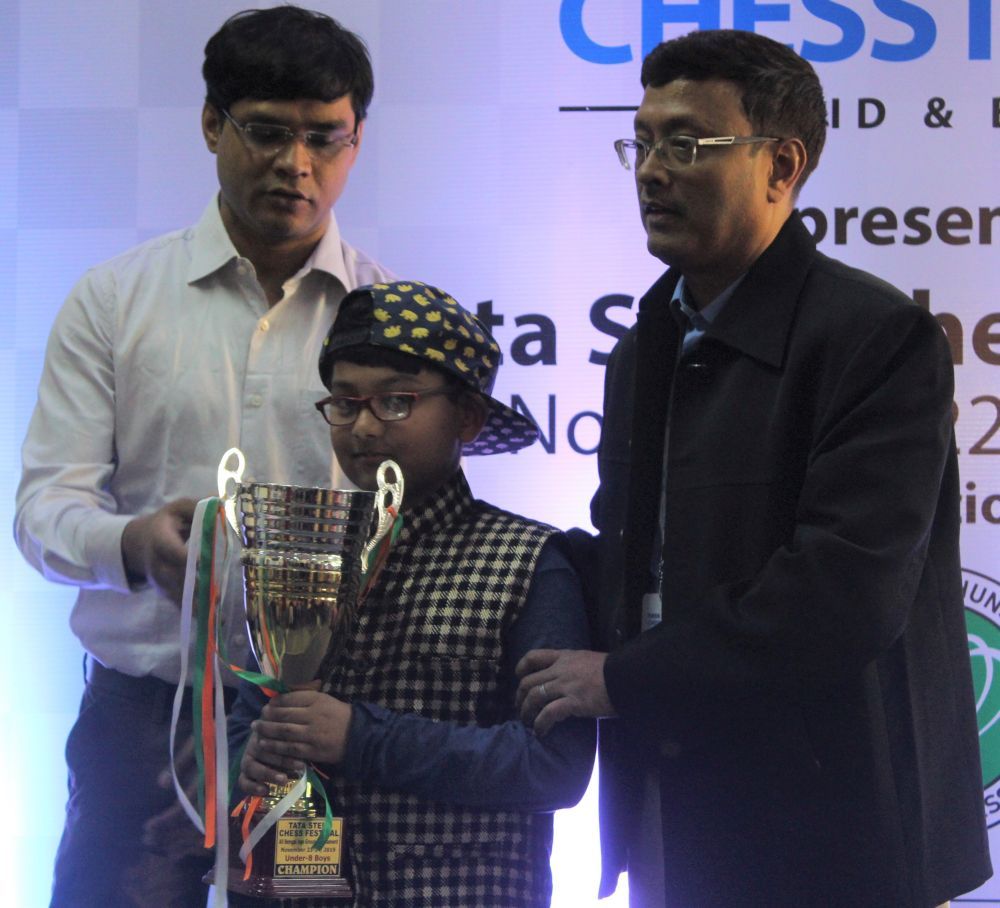 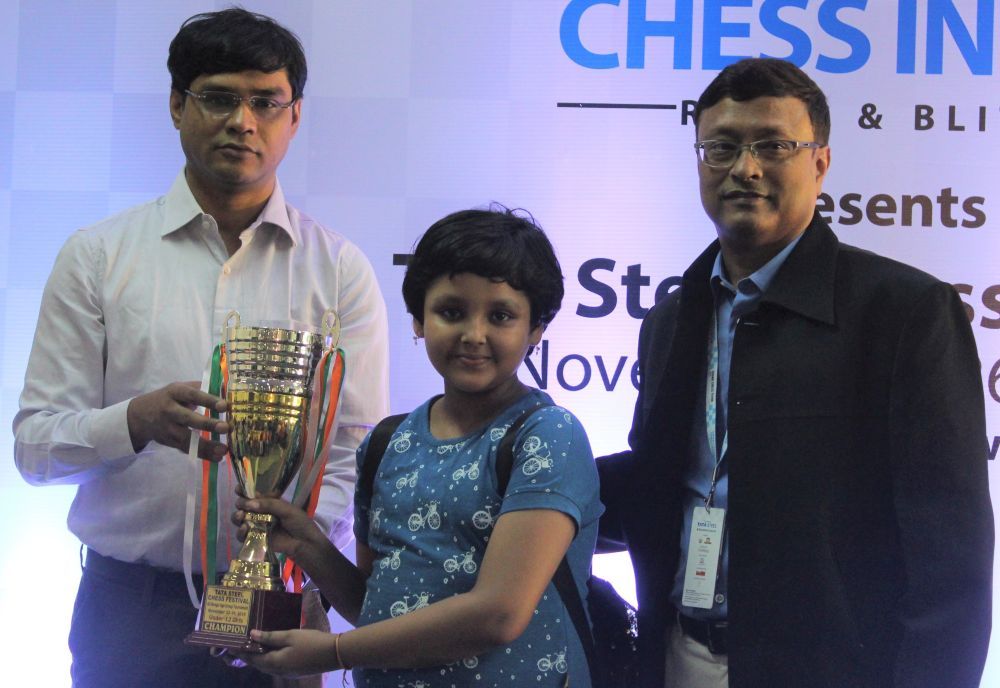 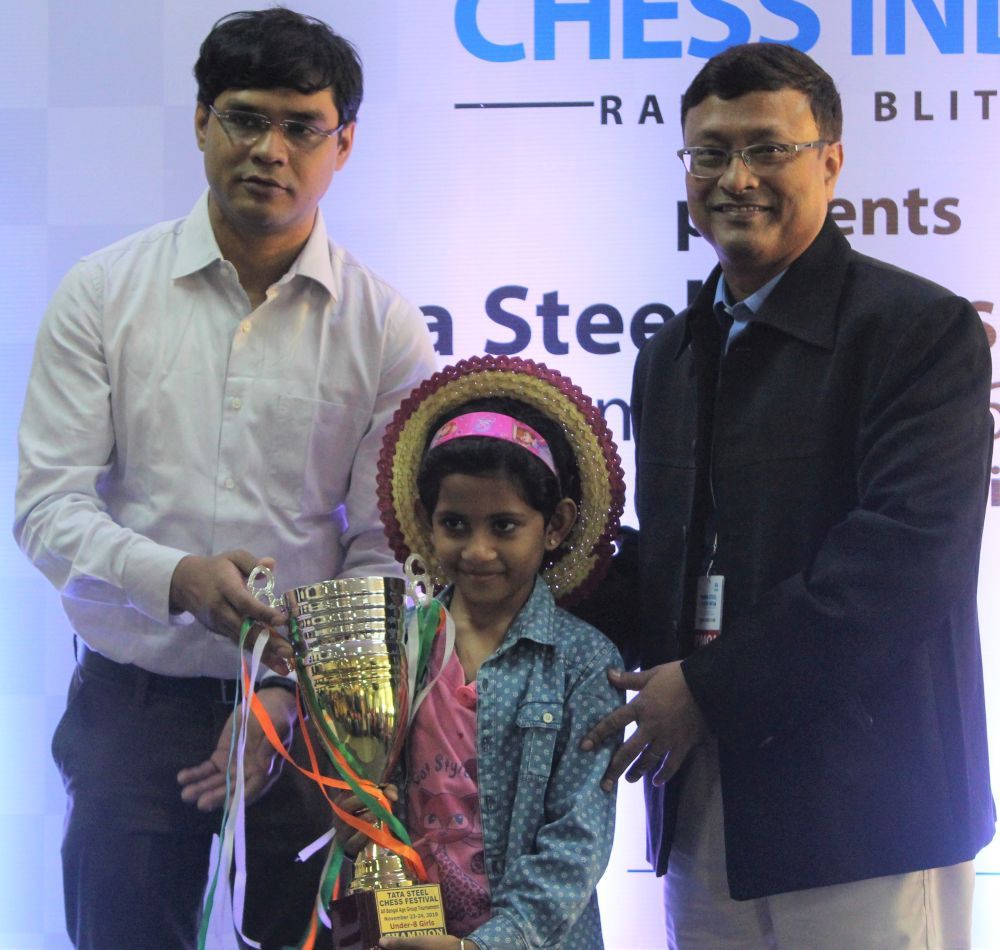 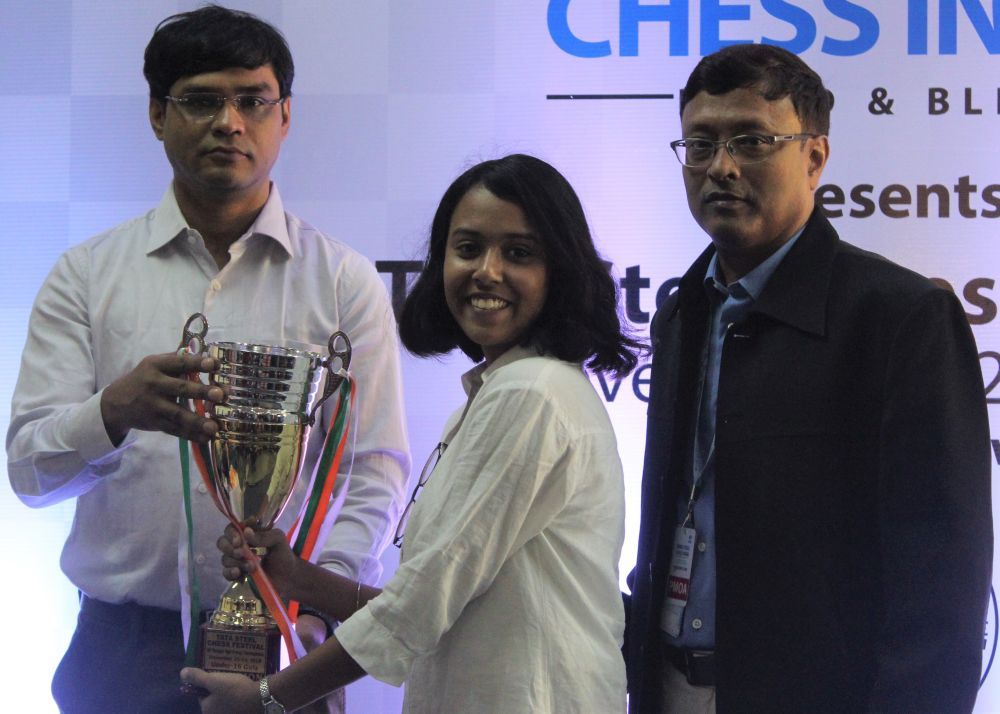