Vidit Gujrathi: "I, like everyone else, want to perform well"

GM Vidit Gujrathi has every reason to be happy about his performance thus far at the Tata Steel Masters. Scoring 3/5, he is not only just a half point behind the leaders but has also remained undefeated, saving crucial games against Jan-Krzysztof Duda and even the mighty Magnus Carlsen. On the first rest day of the event, Aditya Pai caught up with Vidit to talk about how he prepared for his maiden appearance at the Tata Steel Masters, his saves against Carlsen and Duda, his love for the city of Prague and a lot more. | Photo: Alina L'ami

"Overthinking before the tournament does not materialize"

AP: Does playing in the Masters segment of Tata Steel feel any different from the usual tournaments you play?

VG: Well, I haven’t really played in many super tournaments so far. I have played in events where I played a 2700 rated GMs every round, but this is something different. First of all, it’s a very long event so it really tests your stamina. Also, it holds a special importance in the chess world. It has a long tradition, all the greats of the game have played and won here. It can’t really be compared to the other events which I have played before.

AP: Since this is the biggest event of your career thus far, how have you prepared for it? Do you have any seconds that you are working with?

VG: First of all, I hope to play much bigger events in the future. But yes, I have come here with my coach, GM Alon Greenfield. He is from is Israel and he has come here with me to help.

AP: And what is the exact role of a coach/second in such an event? Does it go beyond helping with opening preparation?

VG: It is mainly opening preparation. But there are also a lot of other factors as well, mainly psychological stuff. So it makes a big difference. I am really finding it useful.

AP: A couple of years ago, another young Indian grandmaster, Adhiban Baskaran had stunned some of the top players with off-beat openings like the King’s Gambit. While we know you’re a very solid player, can we expect you to go crazy like that at some point here?

VG: (laughs) Adhiban and I are different players. But you never know. Even, I don’t know what I am going to play in the next rounds here. But usually, people would not expect a King’s Gambit from me, that’s for sure. 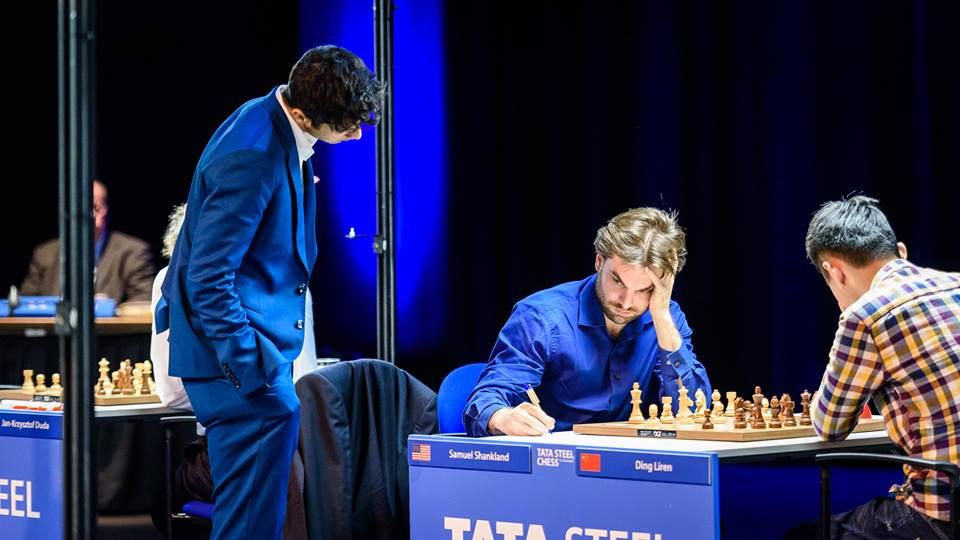 Vidit observing the game between Sam Shankland and Ding Liren in round 5 | Photo: Alina L'ami

AP: What were your expectations in terms of performance, going into this event?

VG: I usually try not to keep any expectations. Of course, everyone wants to do well, that’s no big surprise. So, like everyone else, I also want to perform well. Apart from that, I really didn’t think of any goal as such.

I mean, it becomes so random when you think about the tournament beforehand. Because, when you come to play, your experience is completely different. Overthinking before the tournament doesn’t materialize. This is something I have learned from my previous events. I just see how it goes. A lot of things happen spontaneously and I try to let it remain that way.

AP: But having played so well so far, how do you keep yourself away from thinking about it?

It has been only five rounds thus far. There are eight more rounds to go. The performance could have been better, but in hindsight, it’s easy to say these things.

AP: Did any off the board prep like Yoga or a diet change form a part of your preparation?

VG: I have been playing a lot of Badminton every day since the last few months. That’s the only thing I could think of right now.

AP: May I ask what you conclusions you drew? Why didn’t the tournament go so well?

AP: Also, you had come up with the Vidit Fitness Challenge just a few days before the Tata Steel. Was this, in an indirect way a part of your preparation or did you have completely different reasons for doing this?

VG: Usually, I enjoy playing any sport. So, I thought why not have this challenge. Many people took it very seriously. They were posting their stats every day. Sometimes, it even got tough for me because I don’t play badminton on the weekends but I still had to compete. But it also pushed me in a way to complete the steps and work out even when I didn’t want to.

So, I think it was good for me and also for the people who needed a little motivation to work out. That was the main reason why I did that.

AP: In a closed event with greats like Anand, Kramnik and Carlsen in the fray, how do you overcome nervousness?

VG: I was nervous initially but once you start playing, there are other problems to worry about. There is absolutely no time to get nervous, to think why I am here or how I am playing. There are a lot of concrete issues and everyday game problems that you have to work on. So, that helps to take away other distractions like nervousness.

Initially, it was a bit daunting that I was playing my first super tournament, I had a lot of thoughts, but now it is all gone. It’s like when you go for an exam, you worry about how it will go but once you start writing, you just focus on your answers.

AP: And the first few questions of your examination – your first five games – went very well. But there were also some hiccups, especially in the game against Fedoseev where you were even winning at some point. Can you tell what went wrong?

VG: I think it was one of the good games that I played here. A proper hiccup would be my first game against Duda where I was worse and I was defending a very unpleasant position.

Of course, yesterday I was upset not to have won. I had found a lot of only moves to keep the game going. At some point, he had offered me a draw which I had rejected and had found some very nice queen moves. I just had to finish him off. But after six hours, my concentration was not up to the mark to finish off the game. So, yes, I was a bit upset but I have to move on.

AP: Tell us about your game with Carlsen. Of course, you have played him before but this was the first time that you got a taste of his trademark grind.

VG: Actually, before that game, I had bought a book about Carlsen’s endgames. During the game, I felt that I should have read it. 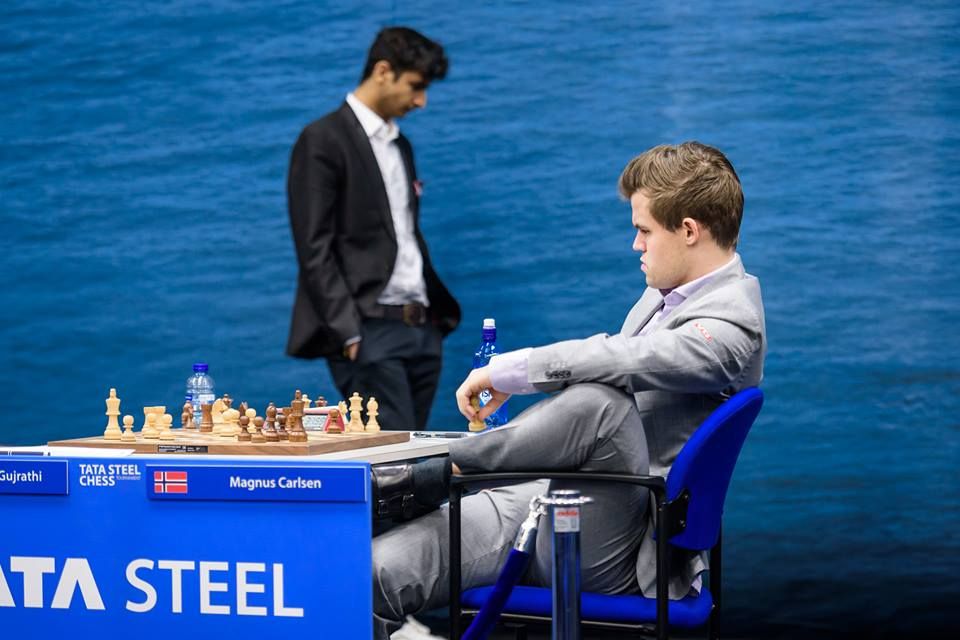 Carlsen played his longest game ever in Wijk aan Zee against Vidit Gujrathi. The two played for 131 moves before peace was signed. | Photo: Alina L'ami

He has created this image for himself by winning a lot of equal endgames. During the game, after I had played some bad moves, I was worried that I would become another one of his victims. But then, I really had to duck myself in and find the right defence. At some point, I spent around 20 or 25 minutes to find the right defensive setup but after that I felt confident.

AP: You are still to play some of the top names in the field, including Anish Giri, whom you have been a second to, until very recently. So, how do you prepare against players who you know very closely?

VG: I had played him in 2017 once when we were working quite often with each other. So, it was a problem that we had the same opening files. It was a bit awkward that way. I mean, when you work with someone, you share your opening ideas with them. But I haven’t worked with Giri since a while now. We are good friends, of course. But I don’t think it will be a problem chess-wise.

It will be fun, though, to see how I play against him. I have not really given it so much thought, as of now.

VG: Usually, it’s the same prepare-eat-sleep and go to the game. But here, the games start early. It’s at 1:30 PM here, while usually, it is at 3 o’ clock. So, I end up having late breakfast and I miss lunch. That’s the only unusual thing in this tournament.

AP: Also there is chess on tour…

VG: Oh yeah, yesterday was my first experience of it. I didn’t really see anything on the tour but the playing hall was fantastic. I really liked it. And a lot of people had shown up to watch the game, so it was exciting this way. 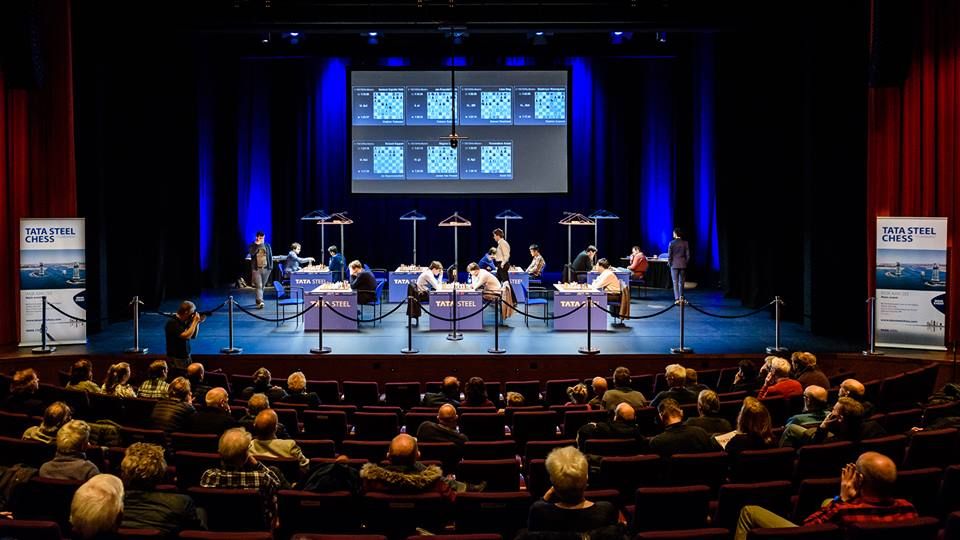 The first chess-on-tour was played in Alkmaar at the Theatre De Vest | Photo: Alina L'ami

AP: Where will we see you play next?

VG: After Tata Steel, I won’t play anywhere for a while. It’s a long event so I would like to take some rest after it’s over. In March, I will play in the Prague Chess Festival in a closed event where again all the players are rated above 2700. That would be an interesting event. And I really enjoy being in Prague. I have very good memories from the place.

AP: If I am not mistaken, you had been there in 2017 before some major event…

VG: Yes, I had been there before the 2017 World Cup and I played quite well there.

AP: But why do you love Prague so much?

VG: Well, the weather is nice. Also, now Harikrishna lives there. When you have company, you automatically have a good time. So yeah, the place is nice and the people who I know are also there.

AP: All right. Thanks for your time, Vidit and all the best for the rest of the event.