D Gukesh won the individual Gold medal at the 44th Chess Olympiad, ahead of Abdusattorov and Carlsen. The 16-year-old won it for a reason and the world no.1 did not forget about it. Wesley So reminded the world about the same after his seventh round win over him. Even though Gukesh's score was a meager 2.5/8 until the ninth round, he is always a force to be reckoned with. Carlsen tested the teenager in various ways, but the boy won't budge. The game ended in a draw and he got to analyze with the three-time world triple crown champion for 50 minutes. Gukesh just silenced the doubters who wondered how the boy will fare against the world no.1 in a classical game in his first super tournament. Well the boy always answers everything eloquently on the board and yesterday was no different. Praggnanandhaa had a solid draw against Caruana. Round 10 starts today at 6:30 p.m. IST. Photo: Jurriaan Hoefsmit/Tata Steel Chess Tournament 2023

Abdusattorov survives a scare against Keymer

The former World Rapid champion, Nodirbek Abdusattorov (UZB) admitted in a post-match interview that he is embarrassed with his play against Vincent Keymer (GER). Well, he should not be, considering the endgame was not an easy one to play and he managed to survive the game after all. Anish Giri (NED) made a great turnaround from a difficult position and defeated the World no.2 Ding Liren (CHN) who made some strange decisions. Adhiban scored his second win in-a-row to take his score 5/9 and move to the fifth position on the standings. 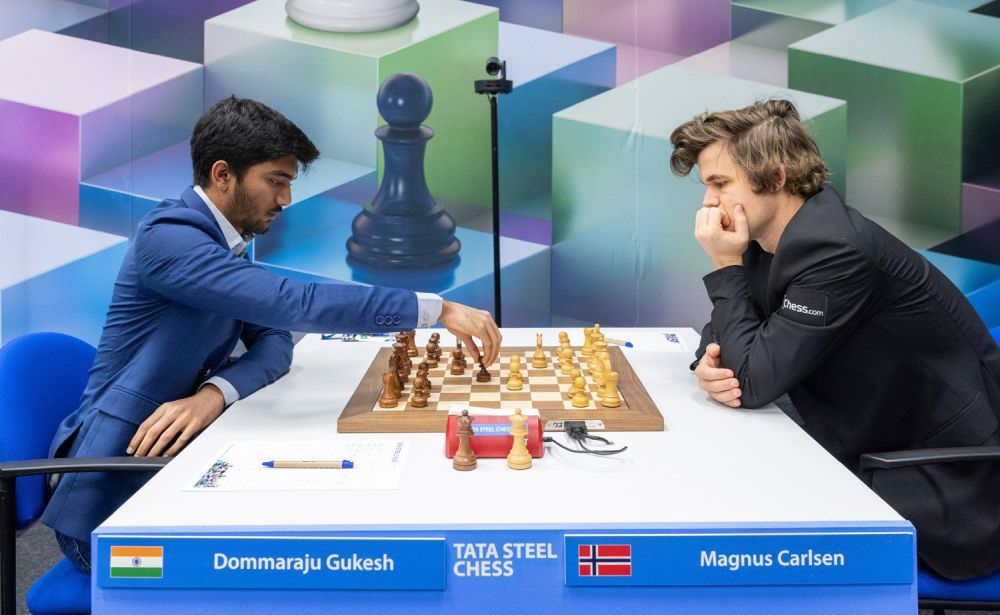 D Gukesh (2725) was quite well-prepared in his first-ever Classical game against Magnus Carlsen (NOR, 2859). The teenager went for 7...Nd7 in the QGD Exchange variation, which his opponent was not that familiar with. 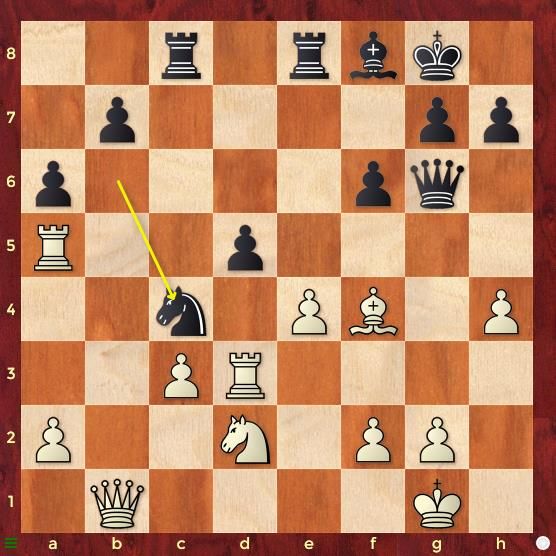 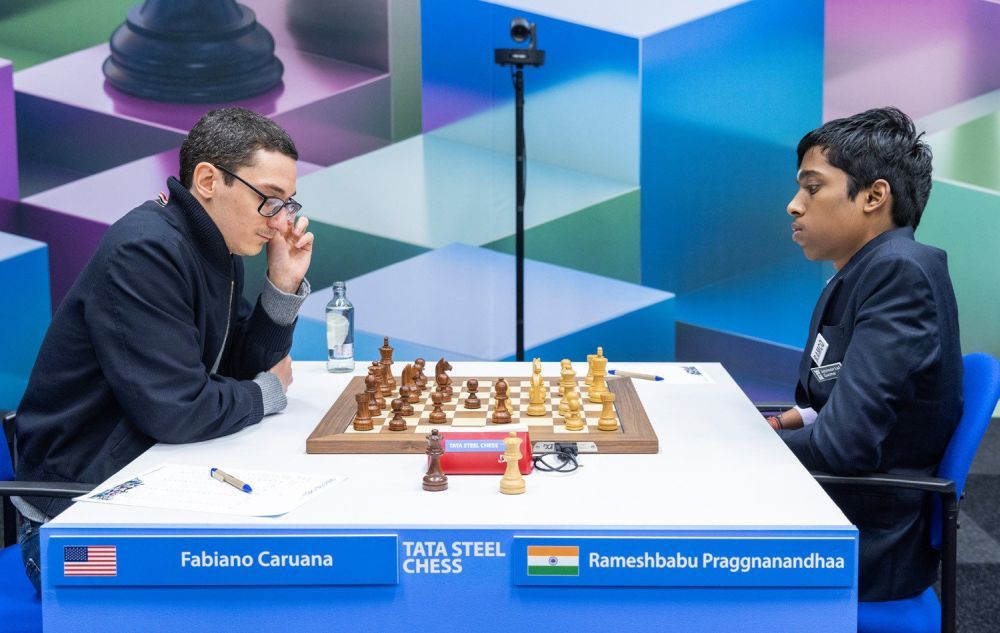 Arjun Erigaisi (2722) went for the a3 variation in the Nimzo-Indian defense, while Richard Rapport (ROU, 2740) was expecting for another battle in the 4.f3 line. The teenager won their last encounter at World Rapid 2022, so it is quite obvious why the Romania no.1 was expecting it. 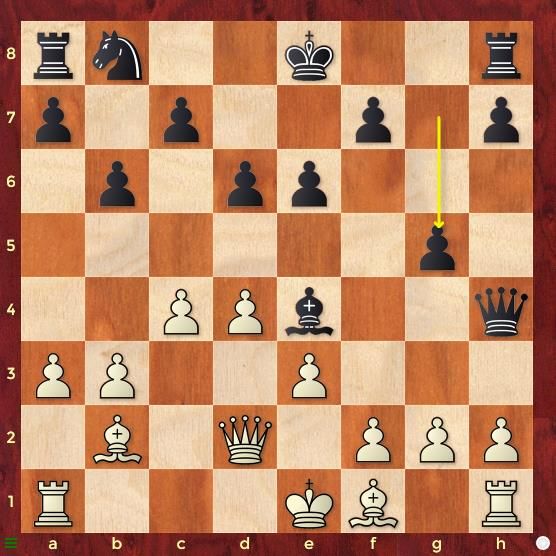 Vincent Keymer (GER, 2696) got a few good opportunities to upstage the tournament leader, Nodirbek Abdusattorov (UZB, 2713) in the endgame. 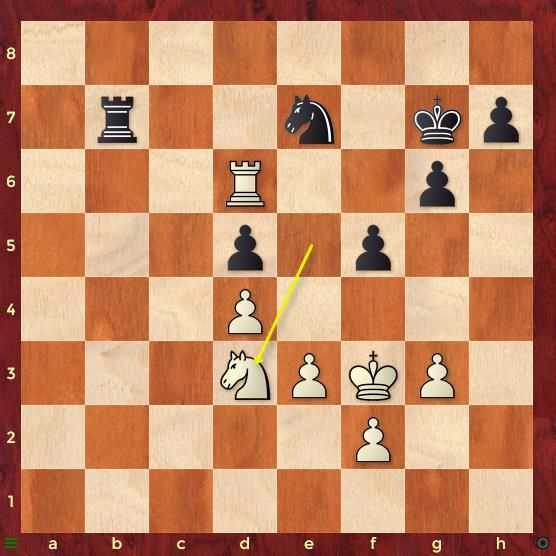 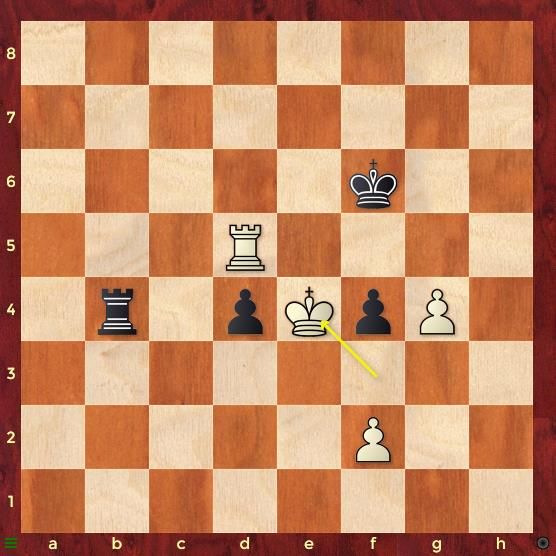 Which is the right placement for the white rook to win the game - f8 or b6? This was Keymer's last opportunity to push for a win and he missed it too. Abdusattorov managed to save the day and maintain his sole lead. 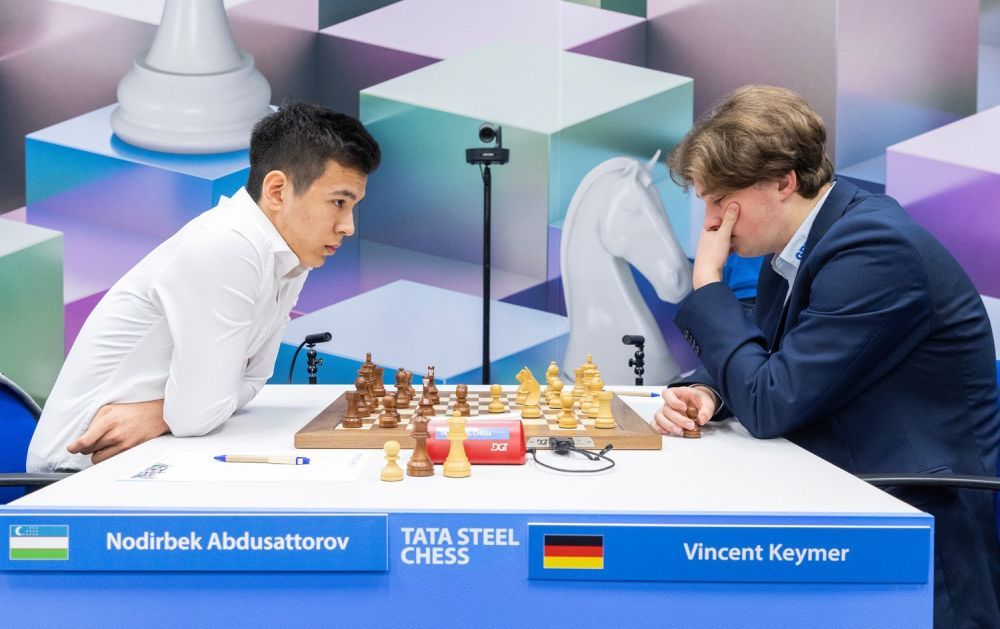 Scenes like these are generally seen when someone is watching football or some other spectator sport. Well things are changing a lot and we might see more of these when it comes to chess

If anyone thinks rook and pawn endgames are easy, the above game was a testament to the fact that it is not. The legend Nigel Short says the same too

Ding Liren (CHN, 2811) played some strange moves and handed over all his advantage to his opponent Anish Giri (NED, 2764). Working with Gustafsson certainly brought a positive change in Giri's play. He is taking chances when an opportunity is presented to him. 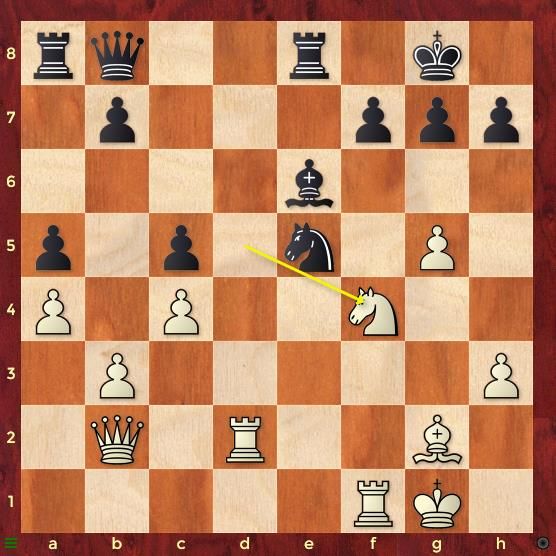 The Giri we are used to knowing would not have played 28...Bxc4! However, the new Giri does. There is no doubt the evolved version of the world no.7 defeated world no.1 and 2 in the same event, a week apart. A series of bad choices by the world championship contender, punctuated by a desperate attempt of grasping at straws allowed the Dutch no.1 to walk away with a win and move to sole second place. 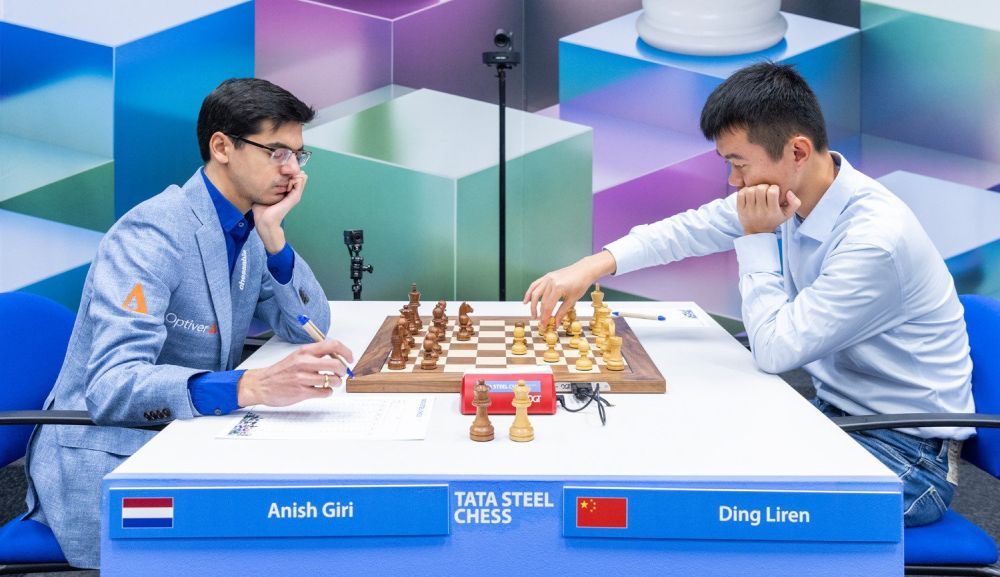 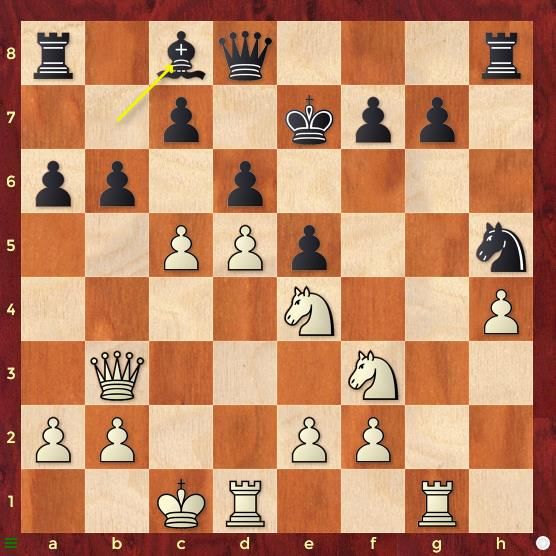 Adhiban (2610) is at his best when he plays in his signature style of bold, attacking chess. Try to think like Adhiban and find out the best continuation for White which he executed on the board. 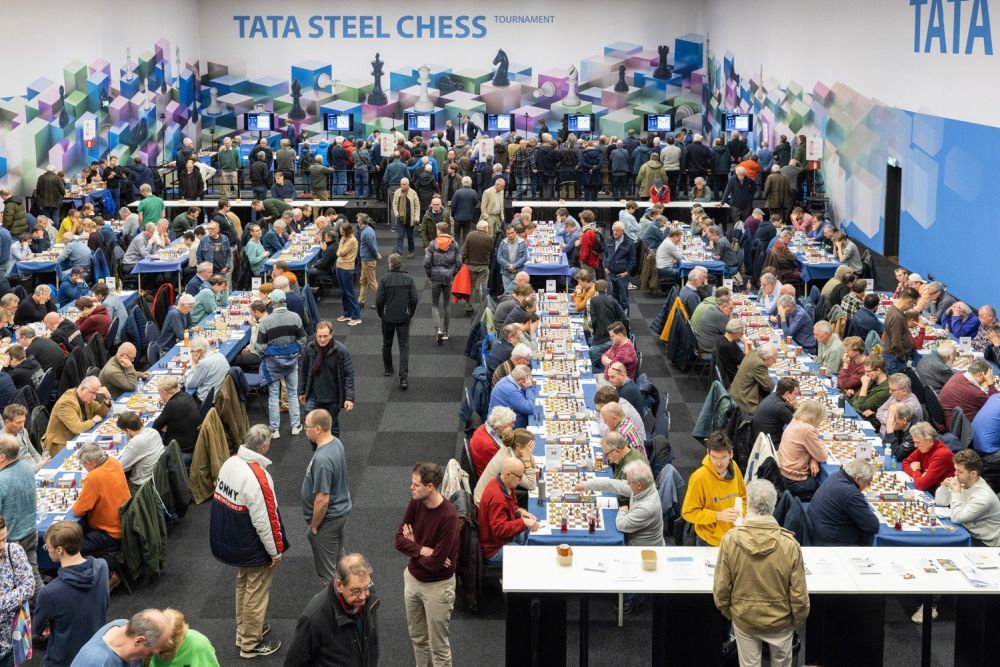 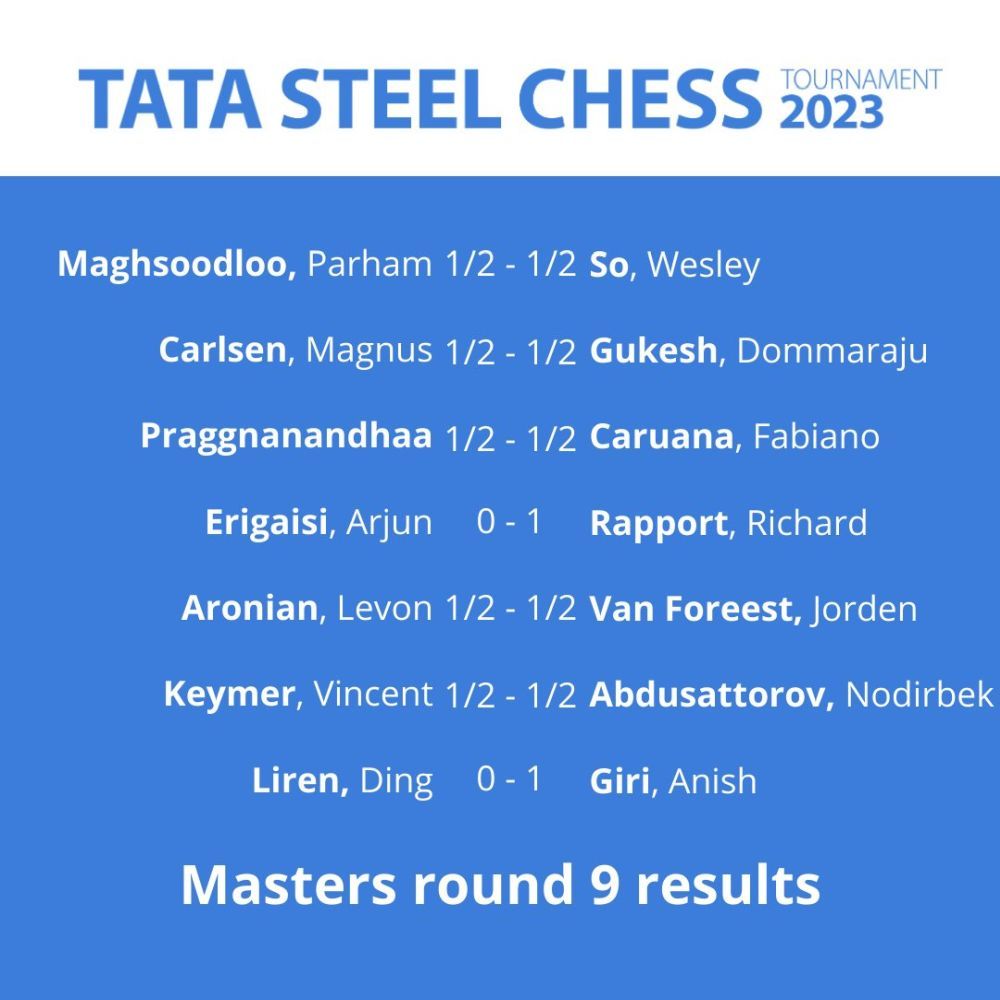 Richard Rapport and Anish Giri were the only two victors in Masters Round 9 | Photo: Tata Steel Chess 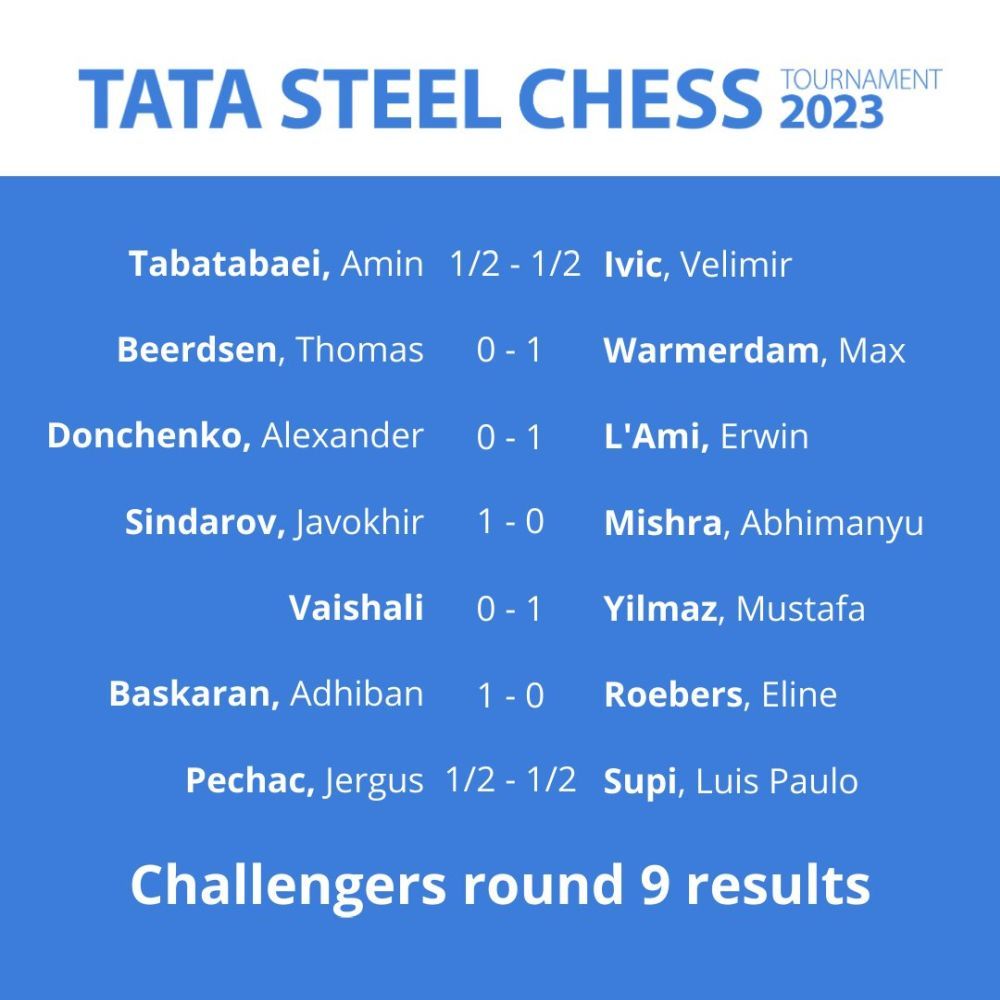 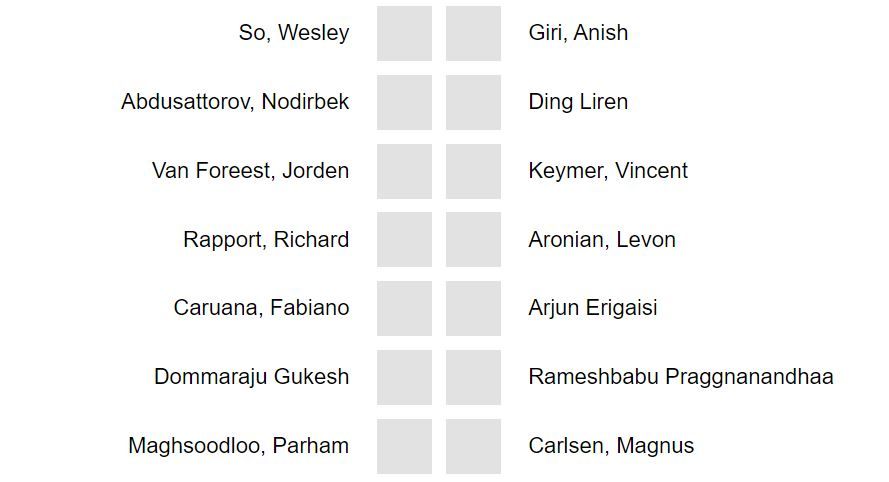 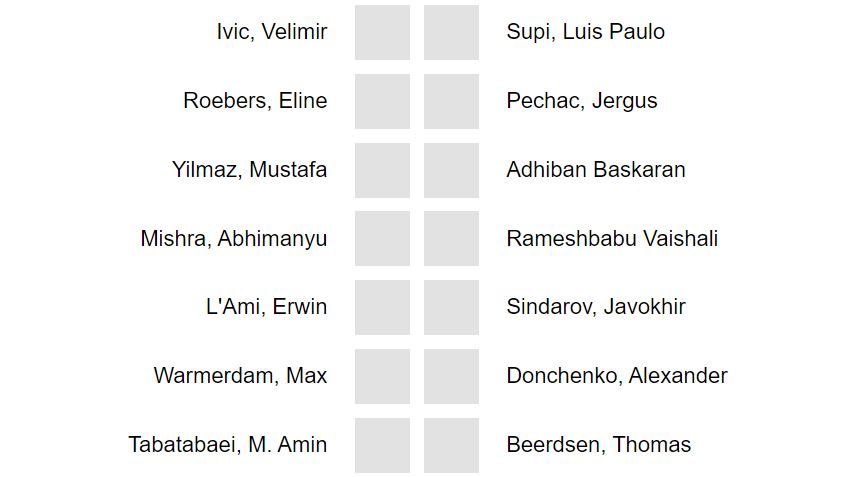 Giri reduces the gap between him and Abdusattorov | Photo: Official site