Third seeded Soham Datar scored 6.0/7 to win 4th Young Masters Rapid Open 2020. Top seed of the tournament Chinmay Kulkarni also finished with the same score 6.0/7. However, since he suffered a loss against Soham in the fourth round, Soham was declared the champion and Chinmay had to settle with the runner-up position. Winner of the third edition, Sriram Sarja was placed third with a score of 5.5/7. The tournament was organized by chess mothers of Pune city to celebrate International Women's day on 8th March 2020. Here is a pictorial report of the tournament. Photo: Ganga Pant

Soham and Chinmay finish at 6.0/7 each

Third seeded Soham Datar scored 6.0/7 and won 4th Young Masters Rapid Open. Top seed of the tournament Chinmay Kulkarni also finished at 6.0/7, since Soham beat Chinmay in the fourth round, Soham clinched the championship and Chinmay had to settle for the runner-up position. Sriram Sarja was placed third with a score of 5.5/7. The tournament was hosted by chess mothers in celebration of International Women’s day on 8th March 2020.

Top two prizes were given away Ms. Deepika Negi. 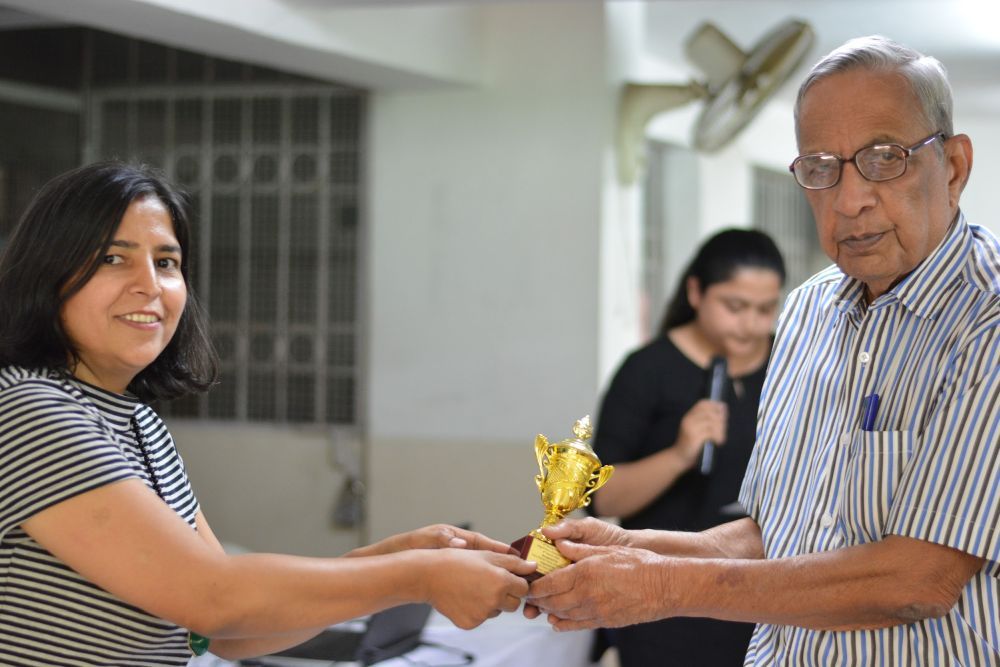 The event also felicitated the recent Pune district selection tournament winners, who were present to play for the Young Master’s Trophy.

Omkar Sameer was given a special recognition by the team, for his exemplary efforts in overcoming visual challenges and proving himself in all the recent district chess tournaments. Omkar has done well in swimming as well and is an inspiration for us all. To his special credit, Omkar won third prize today in Under-14 age group with third well deserved wins.

Chess Parents at Pune have been organizing practice tournaments over the last couple of months and this was their fourth tournament of Young Masters Rapid Tournament series at Mangalwadi, Senapati Bapat Road, Pune. This time, the mothers took over the reins on the occasion of International Women’s day and showcased their ability to run a successful event.

Ms. Snehal Mahajan, a senior city chess player, sponsored the cash prize for the best woman category and addressed players and parents alike to provide special support to the girls and women of the family and encourage them to take up sports more and more.

Despite another parallel event being organized in the city area on the same day, the organizing committee of chess mothers got a special mention in the local chess circles for having organized a very lively, well managed and disciplined event.

Deepika Negi and Ganga Pant, from the organizing team, conveyed to the participants and their parents that they all hold the keys to the future together and unless we all strive to create more such local events at regular times, the young talent of our district will not be able to compete with the high national and international standards of the sport. Today Maharashtra is among the top five states in terms of its chess prowess and if the local community will be more active, only then with the support of local chess bodies (PDCA/MCA) and coaches of the district, we could aspire to make Maharashtra a leading chess state in the country.

They also specially lauded the efforts of Soham Datar, Chinmay Kulkarni, Siddhant Tamhankar and Sriram Sarja - for their recent contributions towards developing the chess ecosystem in the district. They have been renowned chess players and now are actively mentoring and nurturing the young talent of the city and showing them the right path to success. The city and country will hugely benefit if there would be integrated coaching systems wherein coaches indulge in collaborative training programs and create one platform for carving and polishing the stars of tomorrow.

The players, in their feedback note to the organizing team, appreciated the fact that taking a cue from such well managed events, other organizers of the district have also started offering better playing conditions and have improved a lot in terms of better time management of the events. They were all praise for the promptness and agility of chief arbiter Ms. Dipti Shidore, who ensured that schedules were managed very diligently and players got a very conducive environment to play all day long.

Deepti is just 22-years old and she was one of the arbiters at the World Youth Chess Championships 2019. She enjoys being an arbiter and thinks that the profession runs in her genes! It was from her father IA Rajendra Shidore that Deepti learnt the ropes of the profession.

The players stressed on the need for such healthy initiatives to grow and perhaps get emulated across states with the help of wider chess platforms like Chessbase India. Do stay tuned to ChessBase India calendar for more such tournaments from Pune Chess Parents in future.