The first round of the Croatia Grand Chess Tour was a bloody affair. The first decisive result came from the World Champion himself, who has been completely dominant lately. Magnus Carlsen defeated Anish Giri in twenty three moves with the black pieces. Fabiano Caruana, Ian Nepomniachtchi and Wesley So followed suit by defeating Hikaru Nakamura, Viswanathan Anand and Ding Liren respectively. There are now six players tied for first place. To kick off the event, legendary World Champion Garry Kasparov made the ceremonial first move in Giri - Carlsen and joined the commentary to talk about the games. Vishy Anand lost his game to Ian Nepomniachtchi. We have pictures, analysis and more.

The 2019 Croatia Grand Chess Tour has begun in Novinarski Dom of Zagreb, Croatia.. It is the first of two classical events and the second stop in the 2019 Grand Chess Tour. Hosted by the Grand Chess Tour in partnership with Chess Club e4 from Zagreb, the tournament will see twelve of the world's top players, including the current world champion Magnus Carlsen and former world champion Vishy Anand, compete in 11 rounds of classical chess over a course of thirteen days. The prize fund at stake is $325,000, with $90,000 for the first place. It is an all-play-all event. Players will receive 130 minutes for the entire game, with a 30-seconds delay from move one. In case of a tie for first, rapid and, if necessary, blitz playoffs will take place on 8th of July which is the last day of the tournament. 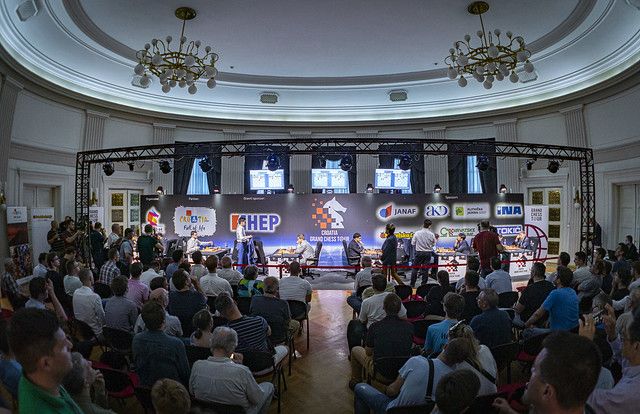 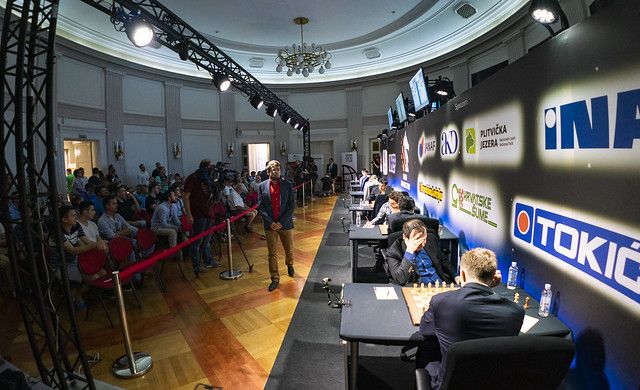 All players in one row, with screens at top is a nice way to follow the games | Photo: Lennart Ootes/ Grand Chess Tour 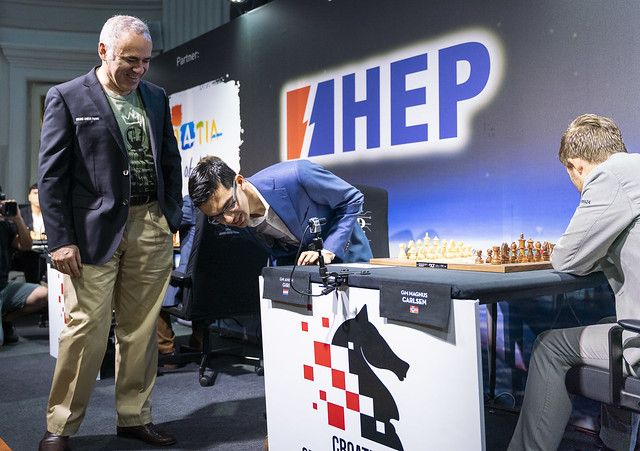 Kasparov and Anish Giri share a little joke at the start of the game | Photo: Lennart Ootes/ Grand Chess Tour 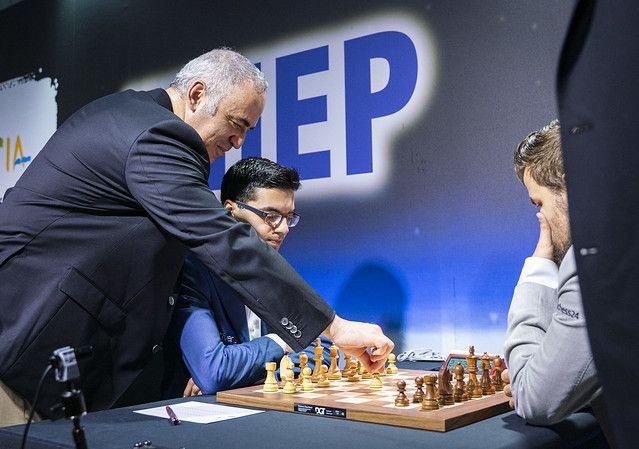 The World Champion continued his streak with a quick win. Carlsen decided to play an offbeat move in the opening, which he described as “stupid” but he wanted to face his opponent rather than his preparation. Giri sank into a deep think and went astray quickly when he abandoned his kingside and went pawn grabbing on the queenside with his queen. The mating attack was too devastating, forcing Giri to resign in 23 moves. The game received the praise of Garry Kasparov, who explained that the reason Carlsen won this game is simply because he had a deeper understanding of the position. 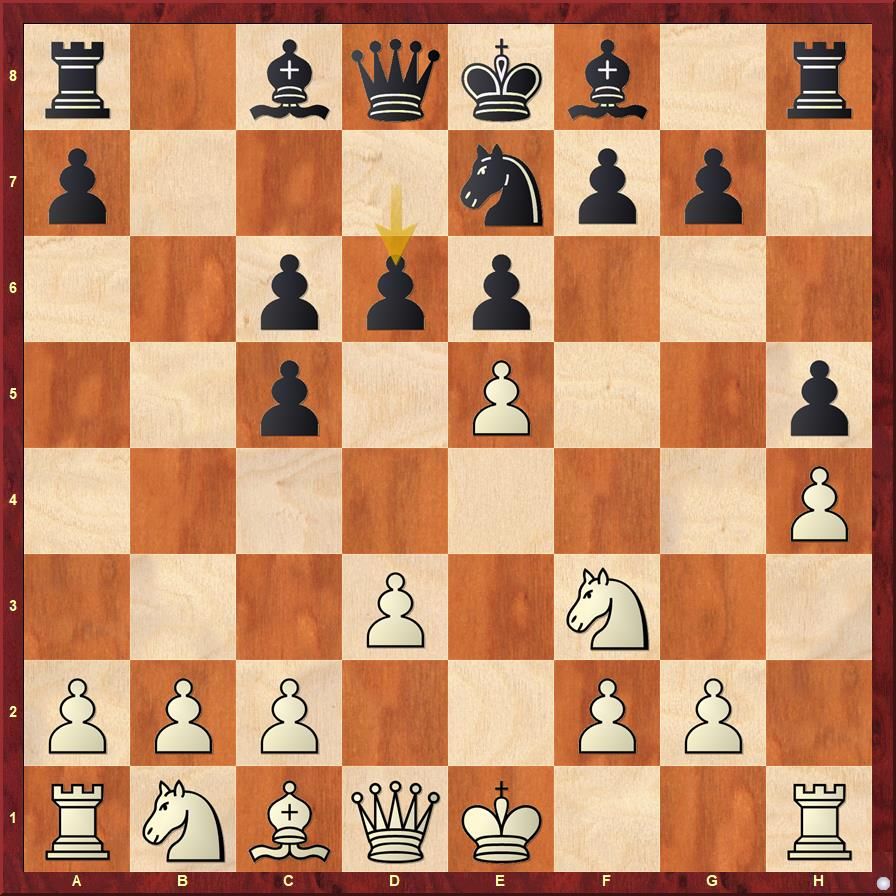 How can a move like this be good? You are just weakening everything in your position! The doubled c-pawns will be weak and isolated. But Magnus realizes that when you have the bishop pair, it is much more important to open the position. Also this is a psychological move, because Magnus was trying to take Giri out of his preparation. 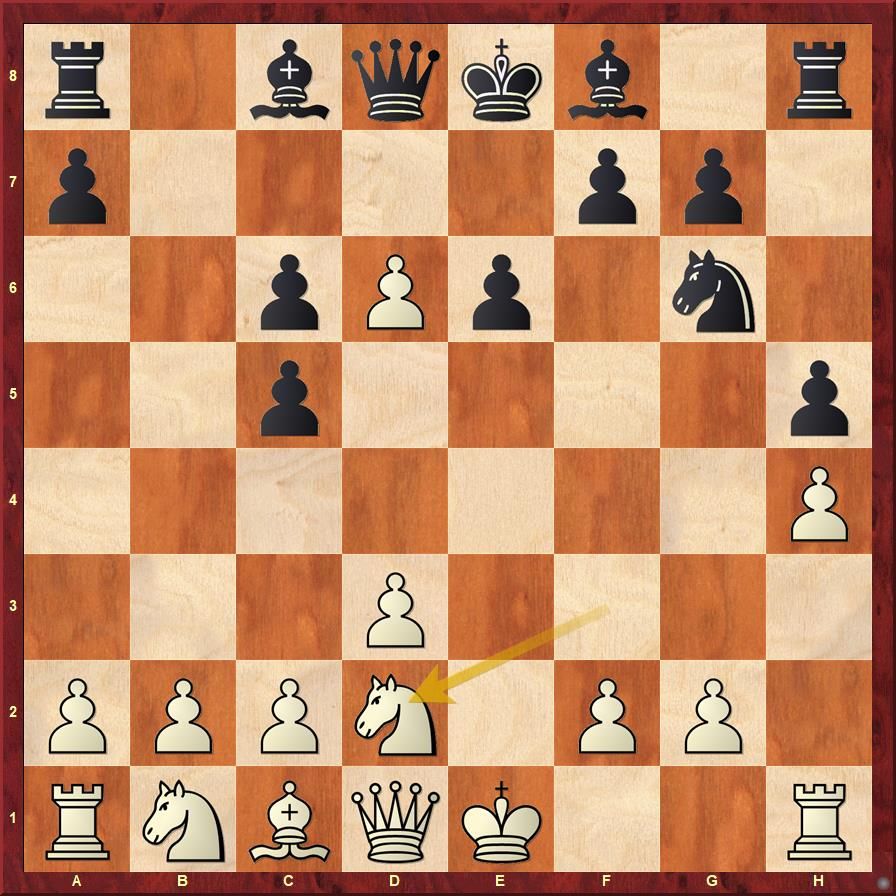 This move is positionally good, but it seems a bit too slow. The knight is coming to c4 and the queen's route to f3 is also opened up, but you are moving the same piece in the opening more than once and this can always be a recipe for disaster. 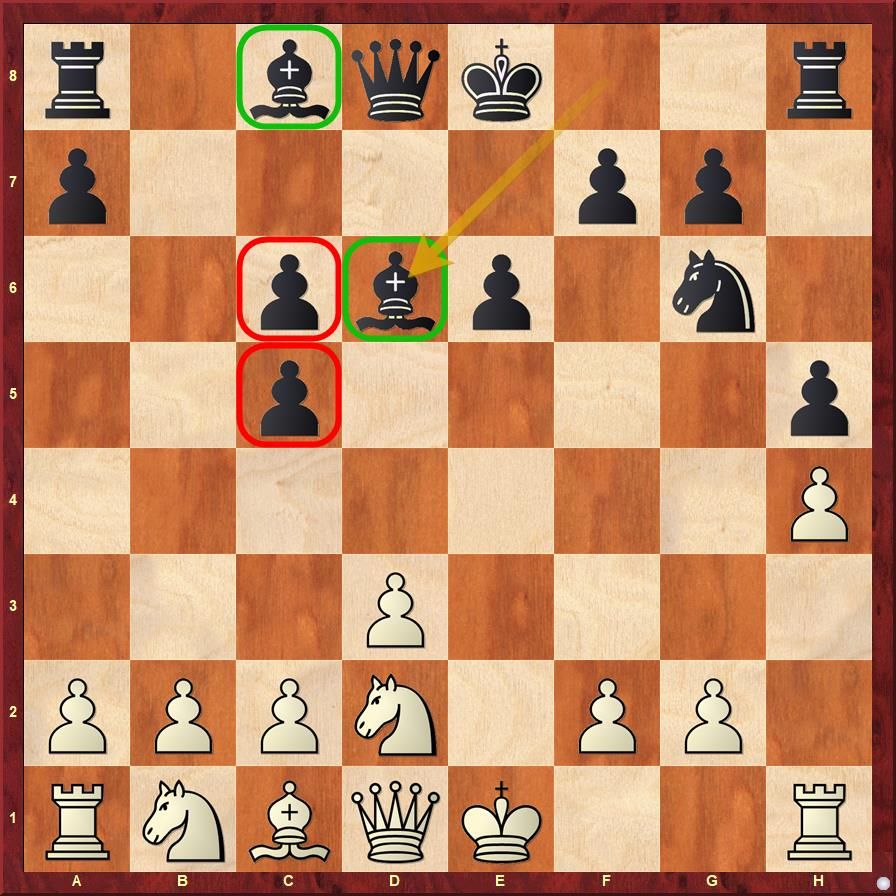 Black's queenside pawns are a wreck, but bishops can potentially be very strong 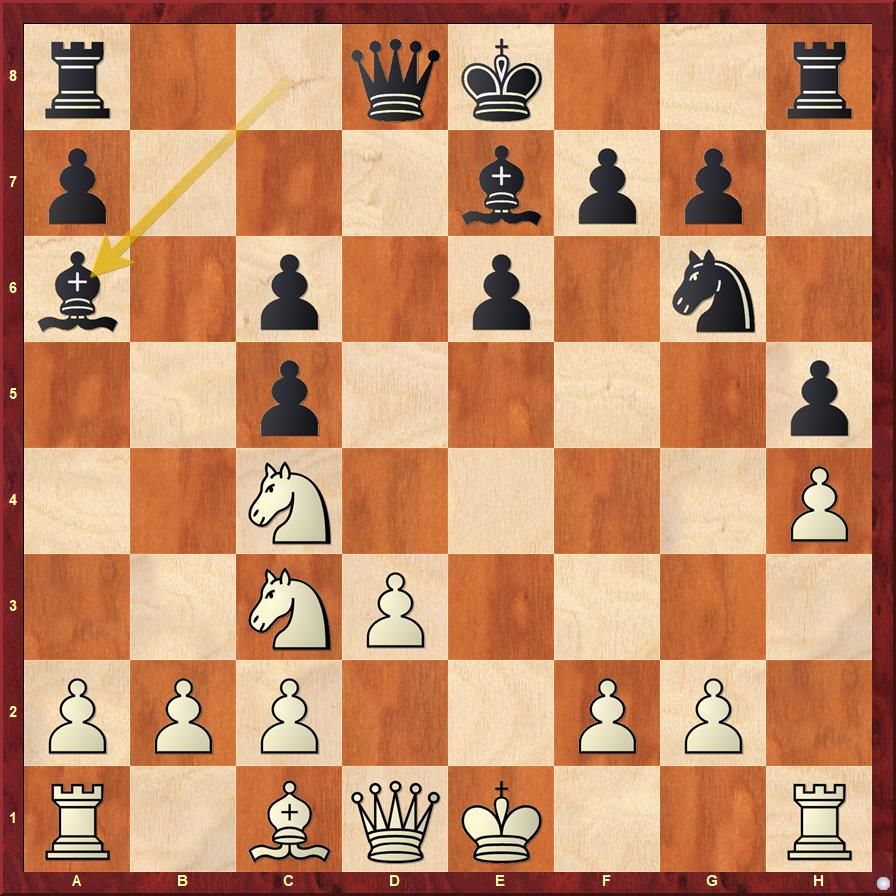 This bishop is always a problem piece in the opening and Magnus does his best to simply get rid of it. 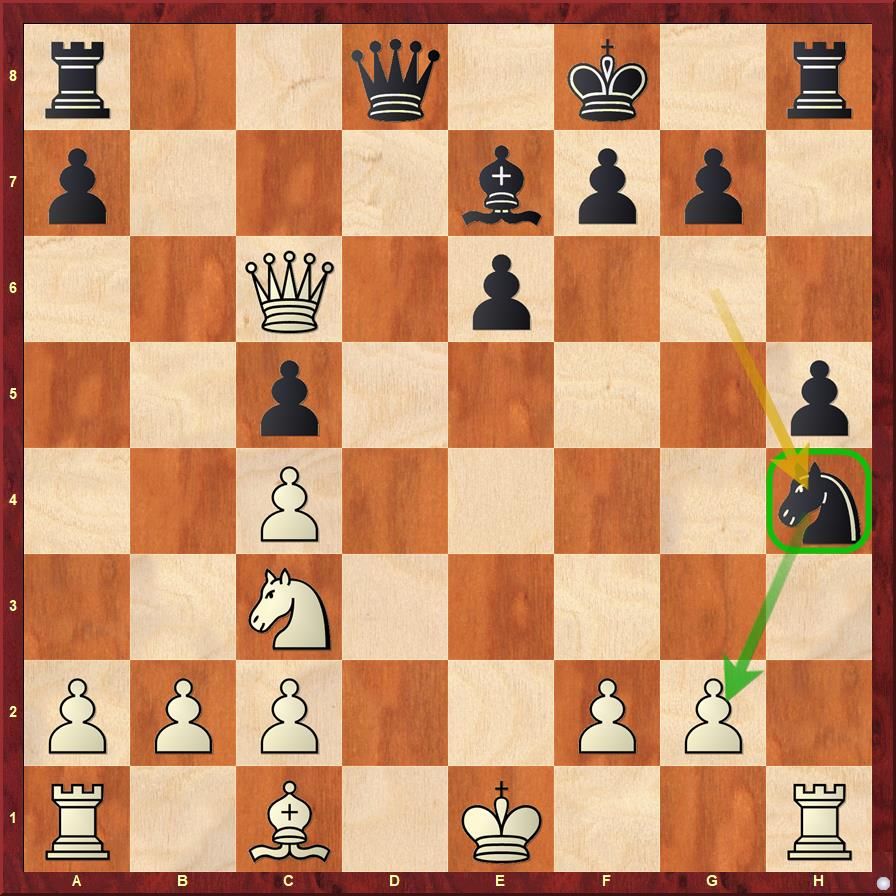 Although White is a pawn up, Black has now started creating threats. Also his king on f8 is much safer than the king on e1. 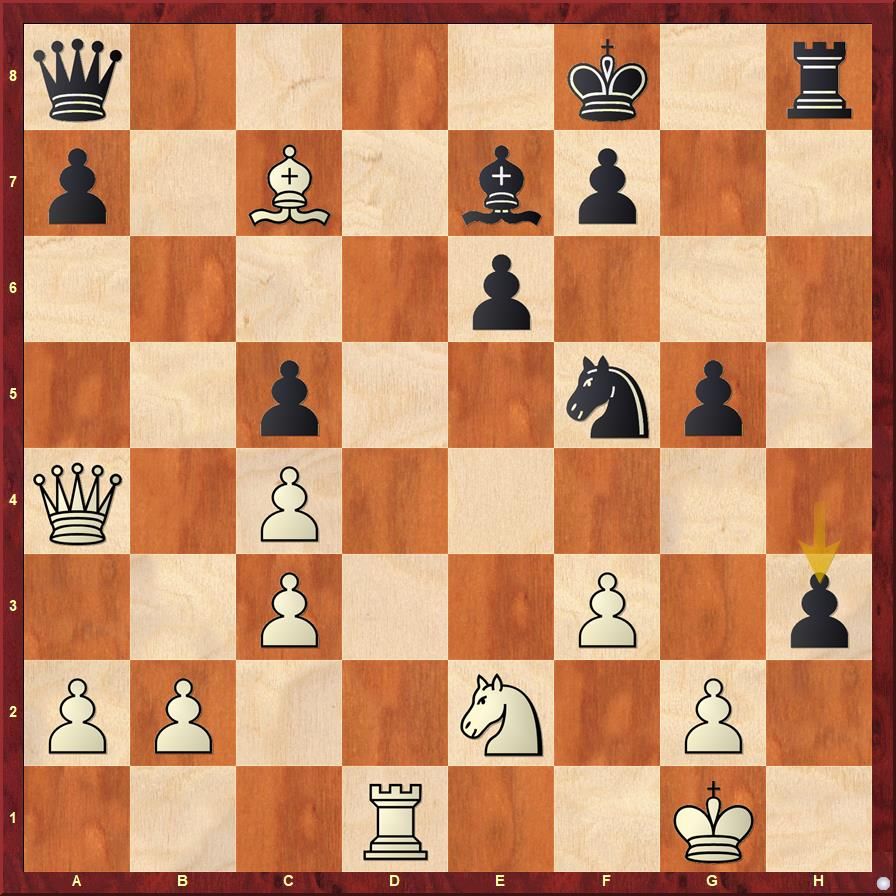 All of Black's pieces are working beautifully. It may seem like the rook on h8 is undeveloped, but it is also contributing in a perfect way and so is the knight on f5 and the queen on a8. Anish Giri resigned as the attack is just unstoppable.
Garry Kasparov speaks about why Magnus Carlsen is so great 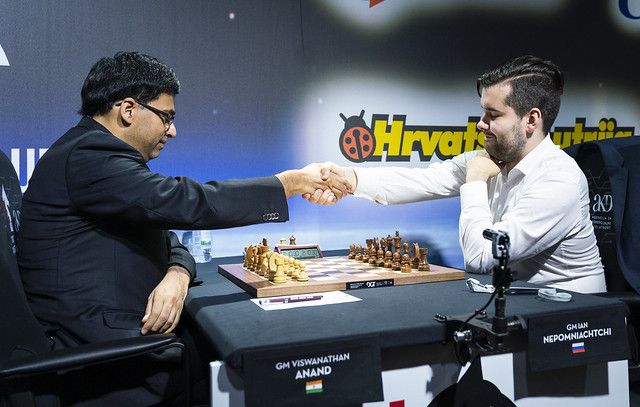 The Russian Grandmaster played a sharp, fashionable line against the Italian. He felt that he erred by castling too early, which allowed Anand to begin an attack against his overextended kingside pawns. Nepomniachtchi was unhappy about his positions and felt that Anand made questionable decisions which he could not quite understand. Anand never finished his development and had to resign after his opponent’s active pieces dominated his position. This win allowed Nepomniachtchi to leapfrog Giri, putting him in the number four spot on the live rating list. 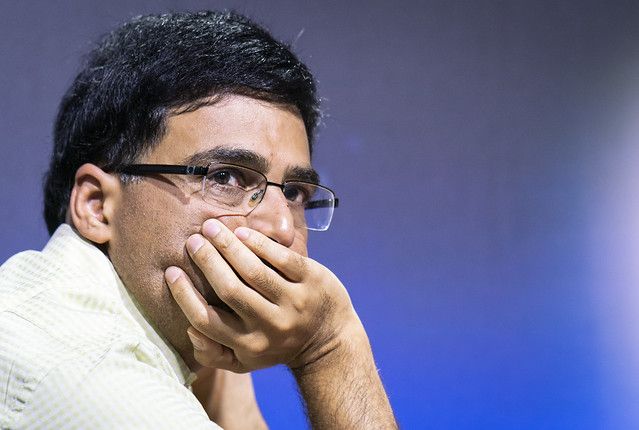 Vishy Anand has had a slow beginning in Croatia, but it won't be before long when he begins to show his true self | Photo: Lennart Ootes/ Grand Chess Tour 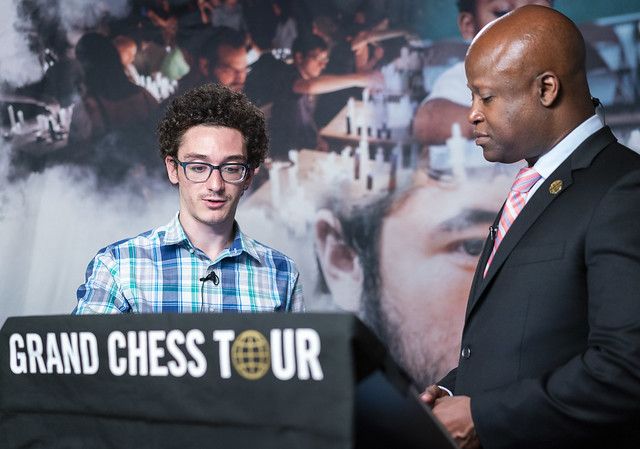 Caruana was able to get the better of Nakamura in round one | Photo: Lennart Ootes/ Grand Chess Tour

Commentator Yasser Seirawan described this game as finished before it began. Caruana came to the game very well prepared, blitzing out the first twenty moves and unleashing a novelty on move 19.  Much to his surprise, Nakamura shared that he was also in his preparation, even though his greedy pawn capture on move 24 was a costly error. Caruana converted without any trouble, sealing the deal on move 40 when both of his rooks penetrated the 7th rank. 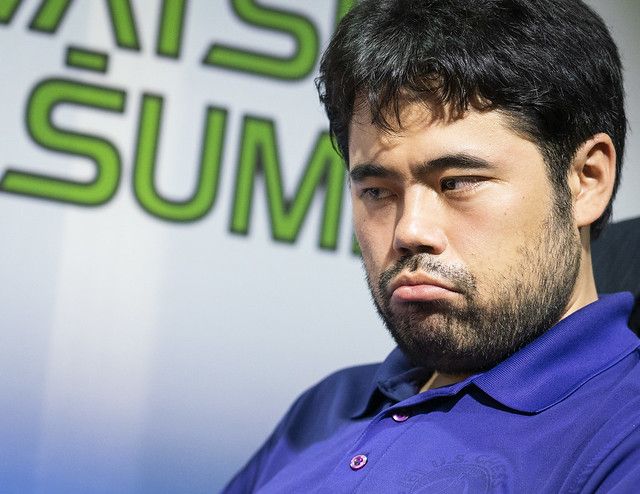 In terms of preparation Nakamura was right up there, but in terms of chess, Caruana was the superior player! | Photo: Lennart Ootes/ Grand Chess Tour

Welsey So vs Ding Liren 1-0 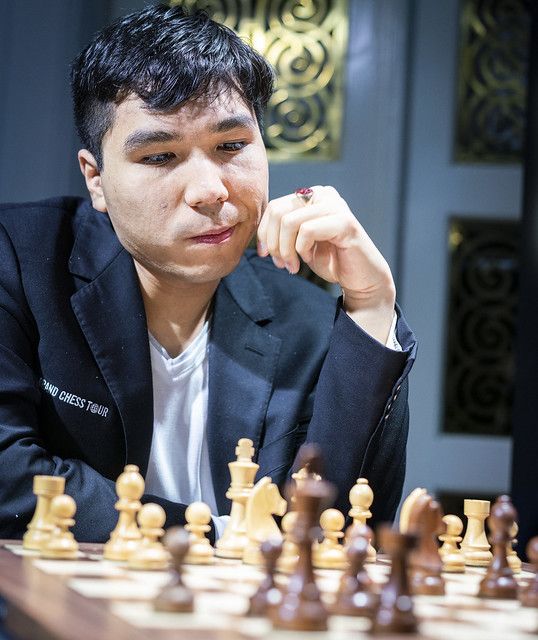 For a long time, this game looked like it was headed towards a draw even though So had the pair of bishops and a better pawn structure. Slowly, Ding Liren started worsening his structure and worsening his position, specifically by putting his rook on an awkward square. The Chinese star was already headed towards trouble when he got his bishop trapped. In his interview, Wesley So pointed out that Ding Liren has been playing a lot lately, and may be fatigued coming into Croatia. 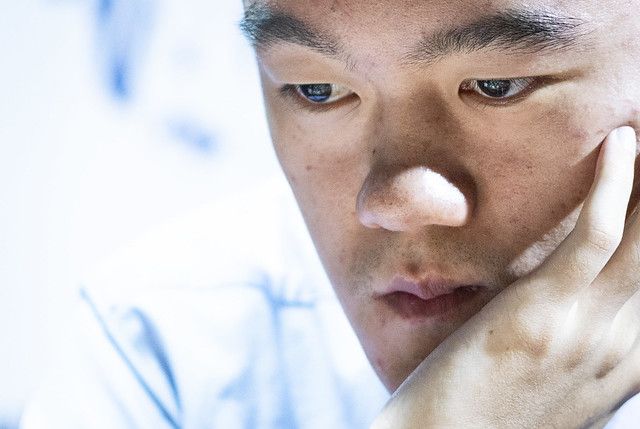 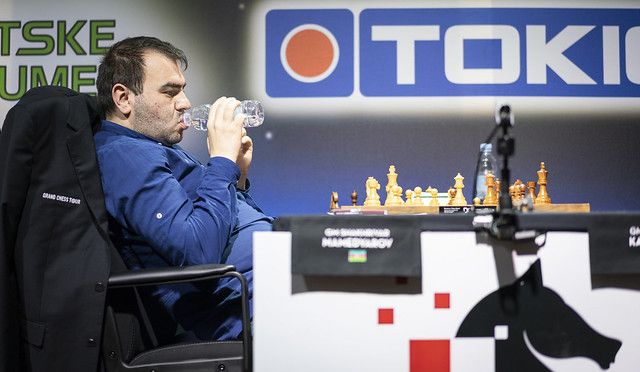 Mamedyarov in his relaxed pose thinking about what to do next! | Photo: Lennart Ootes/ Grand Chess Tour 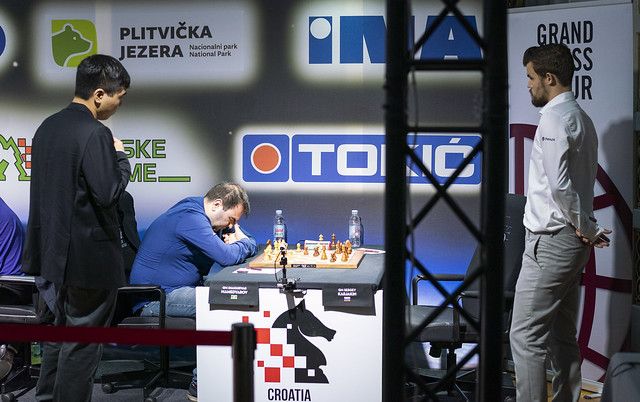 Mamedyarov chose the 4.f3 variation of the Nimzo Indian, an opening he has played several times before. This led to a sharp theoretical battle, where Karjakin sacrificed a piece for two pawns and to weaken his opponent’s king permanently. Mamedyarov declined capturing the second piece which would have allowed a perpetual. The game remained imbalanced for a few more moves until Karjakin found another perpetual, forcing a draw. 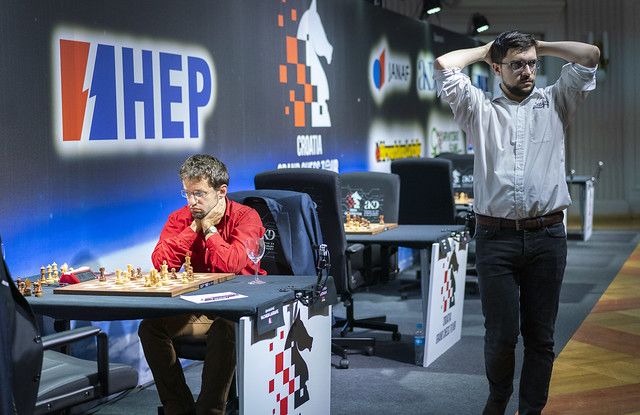 Two good friends off the board, fought it out in the first round - Aronian and MVL | Photo: Lennart Ootes/ Grand Chess Tour

Unsurprisingly, this was the quietest game of the round as Aronian essayed the extremely solid Berlin Defense. Both players have extensive experience in this line as they both play it regularly Aronian played a novelty on move thirteen and kept the game balanced throughout. The players agreed to a draw on move 50 in the two versus two rook ending. 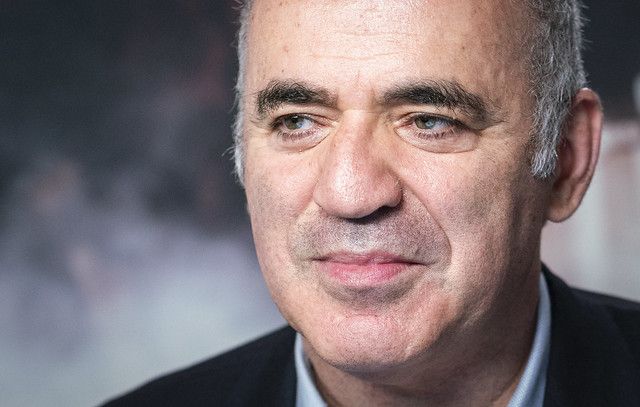 It was so nice to see Garry back in the chess world - commentating, making the inaugural move and just interacting with the players and sponsors! | Photo: Lennart Ootes/ Grand Chess Tour

Image Gallery from the inaugural day Magnus is in good spirits! 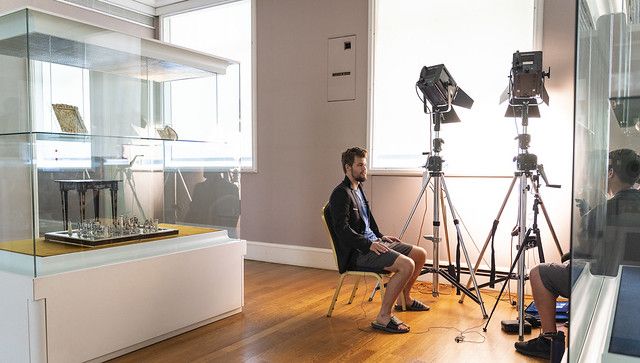 This has now become a habit now! What we see about Magnus is not what we know about him! 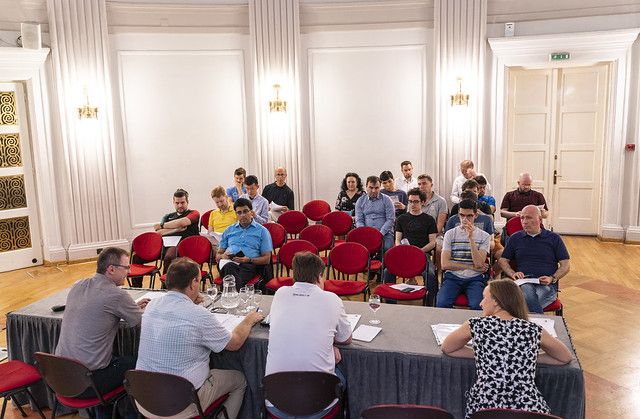 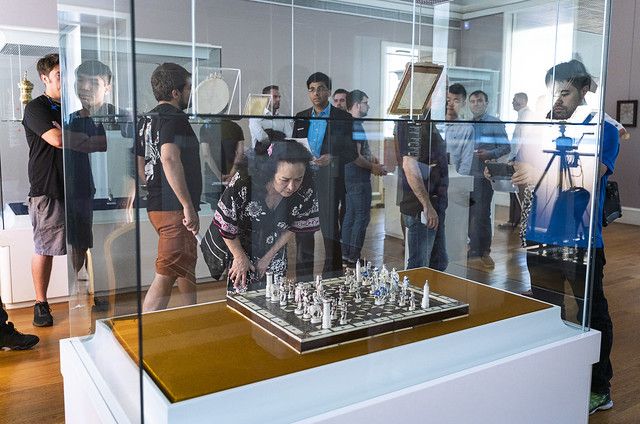 The chess set at the venue surely caught everyone's attention! 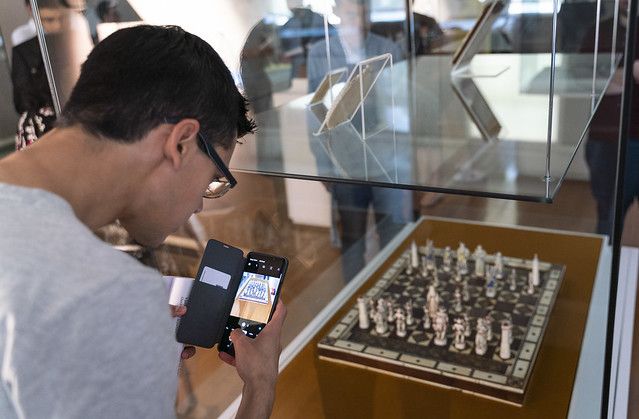 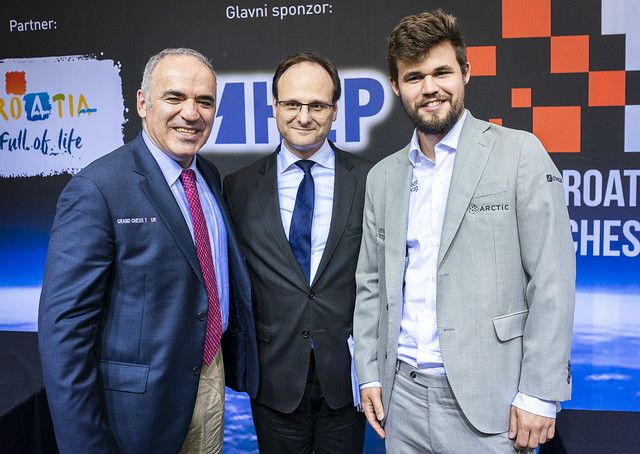 Two greats of our game captured in one frame! 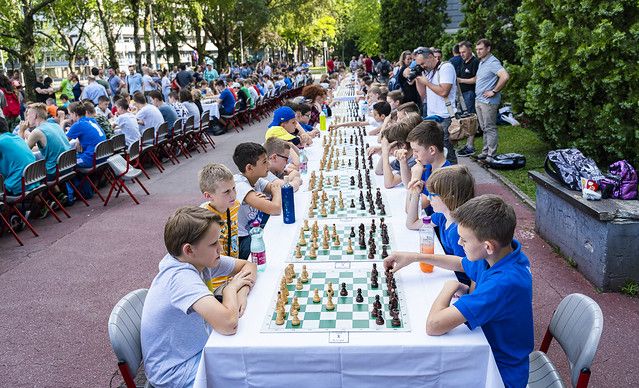 A tournament of this stature is sure to enhance the chess culture of a place! 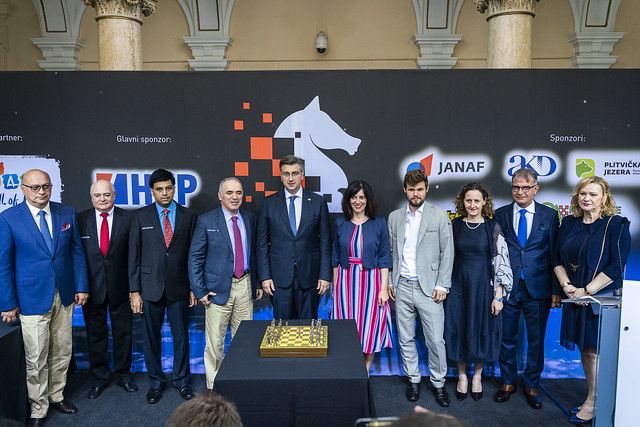 All the dignitaries and sponsors along with Magnus Carlsen and Vishy Anand
Related news: