If Magnus's win over Nepomniachtchi yesterday was a display of his sheer on board confidence and creativity, then today's victory over Ding Liren is a proof of his preparation and practice. The World Champion registered his second consecutive win with the black pieces today and continues to lead the Croatia Grand Chess Tour 2019 after eight rounds of the event. Round 8 saw three decisive games in total, Wesley So defeated Hikaru Nakamura to stay at Magnus's heels with 5.5/8, while Anish Giri beat Shakhriyar Mamedyarov to catch up with Karjakin, Anand, and MVL on the leaderboard. Vishy Anand had an edge with the white pieces against Fabiano Caruana but the game somehow fizzled out into a draw. Elsewhere, Maxime Vachier-Lagrave and Levon Aronian also drew their respective games against Sergey Karjakin and Ian Nepomniachtchi. In this report we bring you photos, analyses, and more.

Magnus with the black pieces outclasses Ding in preparation! 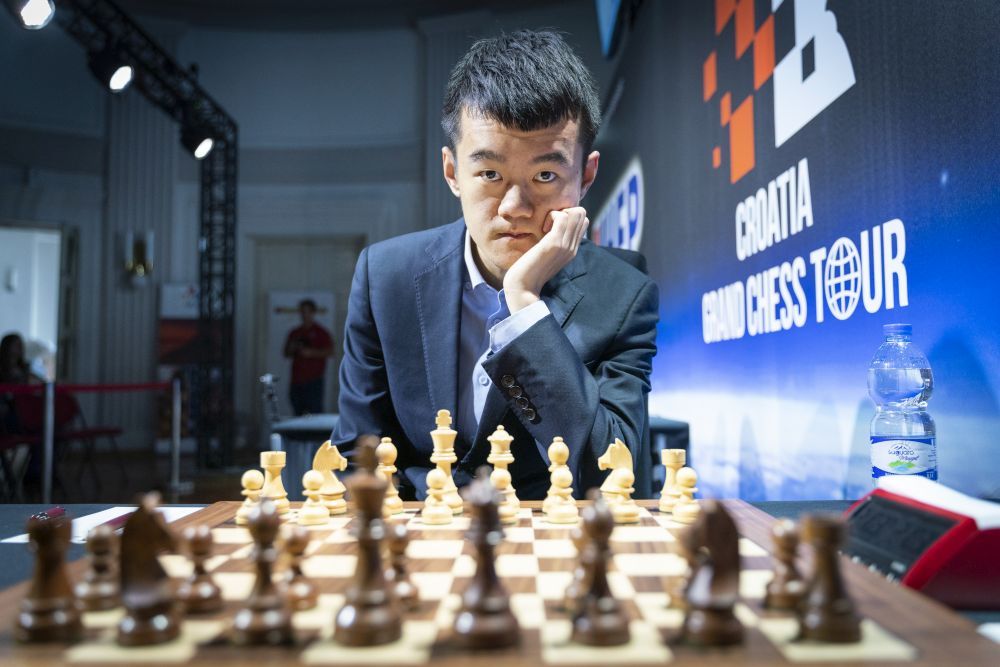 Ding was undefeated in classical chess from August 2017 to November 2018, recording 29 victories and 71 draws. This 100-game unbeaten streak is the longest in top-level chess history. It is not without reason Magnus Carlsen counts this Chinese star, along with Fabiano Caruana, to be the strongest contenders of his throne | Photo: Lennart Ootes / Justin Kellar

In round 8 of Croatia Grand Chess Tour 2019 Magnus Carlsen was up against Ding Liren. The Chinese number-1 is well known for his solidity of play and ability to lose very few games. Believe it or not, up until now Magnus himself hadn't come close to beating him in classical time format. Naturally, this was one of the most anticipated encounters of the event. The game opened with a Catalan and as early as move 11 a completely fresh position was on board. 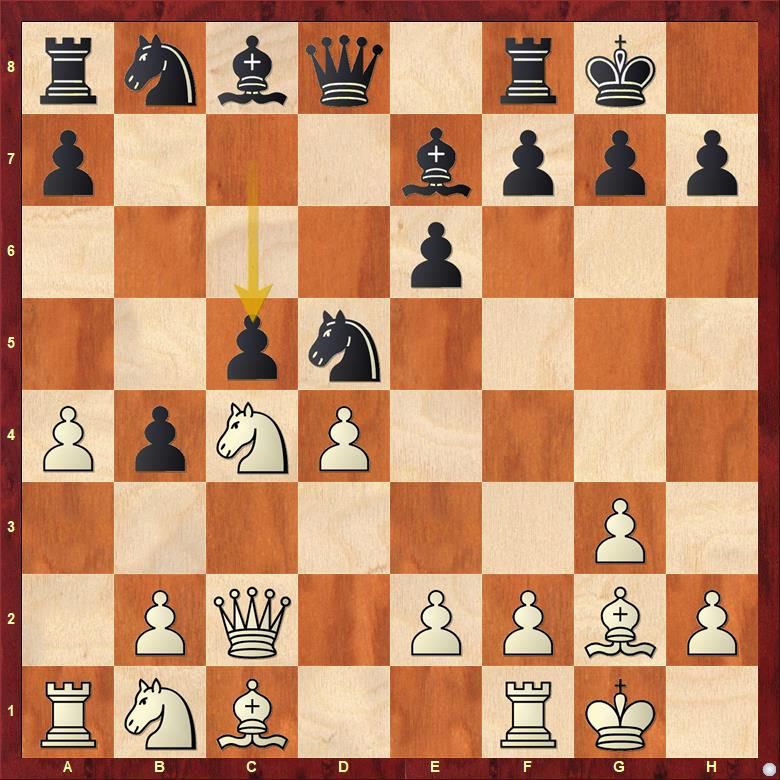 Black has just played the move 10...c5 ... what would you do as White in this position?

Ding thought for about 13 minutes here before capturing 11.dxc5, now 11...Bxc5 would have been a normal reply and has been played before but Magnus came up with this new idea of allowing White to keep the pawn on c5 and went 11...Ba6. 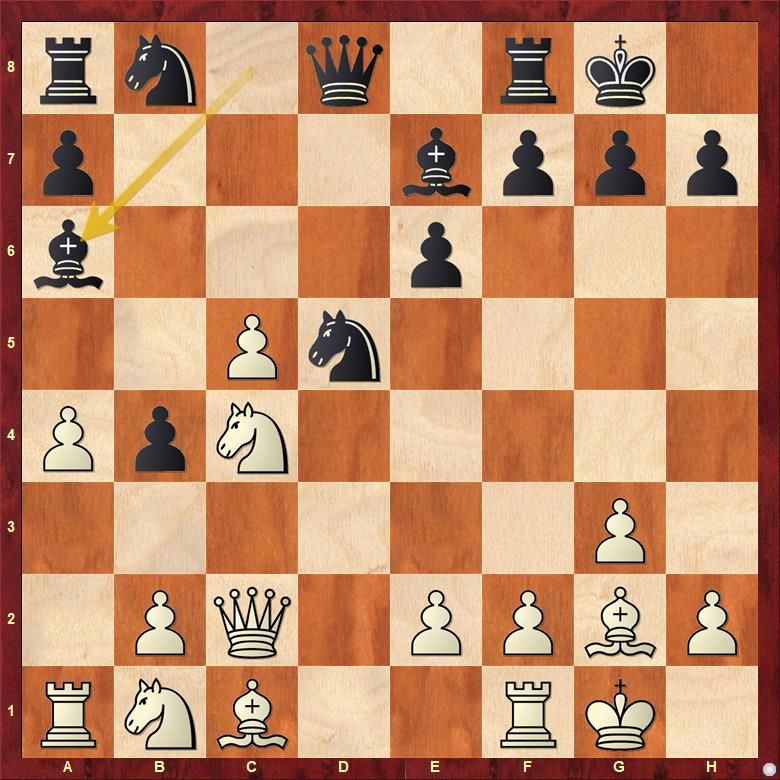 11...Ba6 is a new move already! As is usual these days, Magnus came very well prepared with the black pieces and simply blitzed out his moves. Ding, on the other hand, took a lot of time to navigate through the complications posed by his opponent. 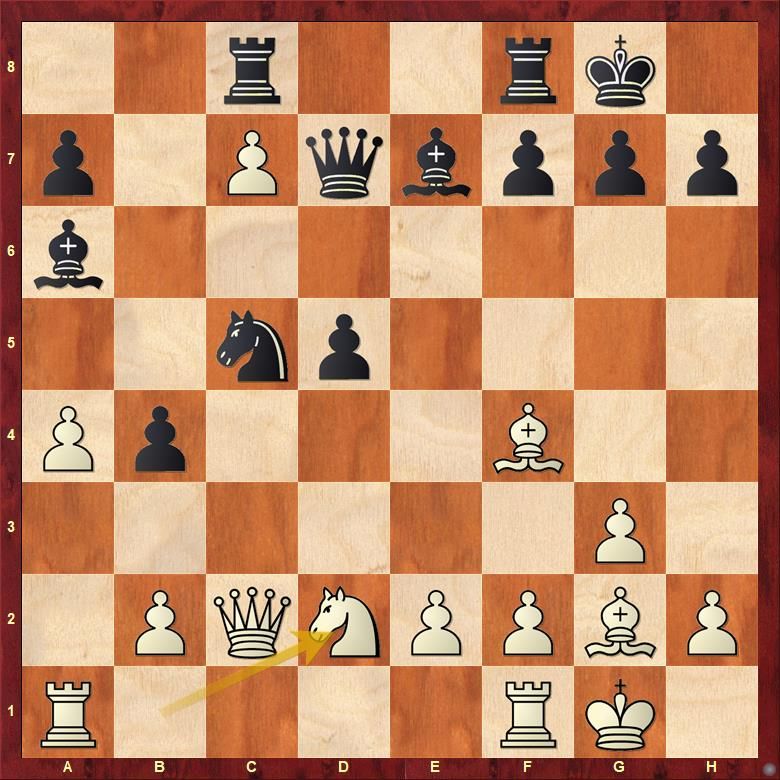 Fast forward a few more moves, White has played 17.Nd2 and still has his extra c-pawn. Black certainly wants to get rid of it but how does he do that? 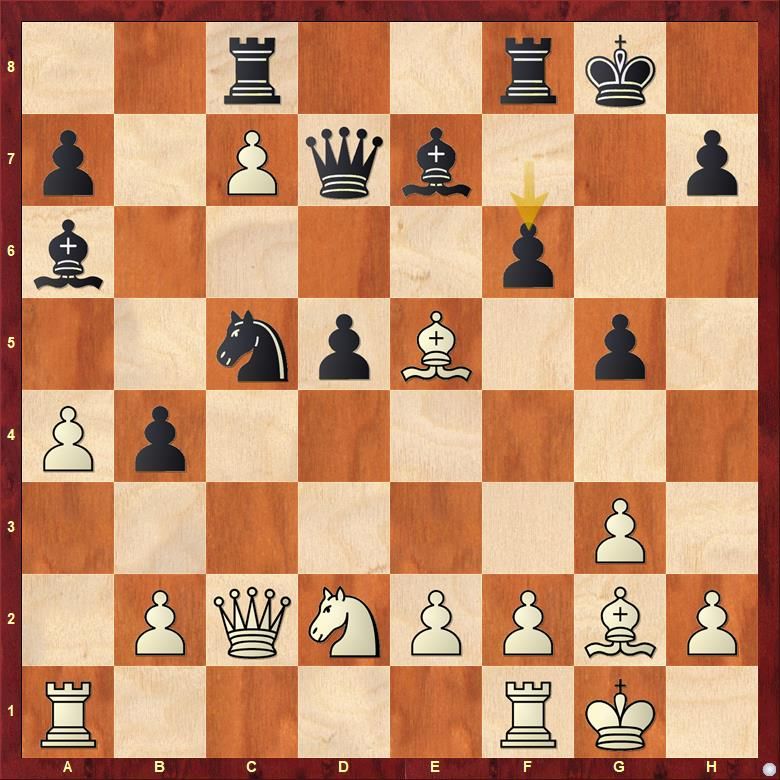 Position after 18...f6: Probably Magnus was still in his preparation as he made all these moves in no time! 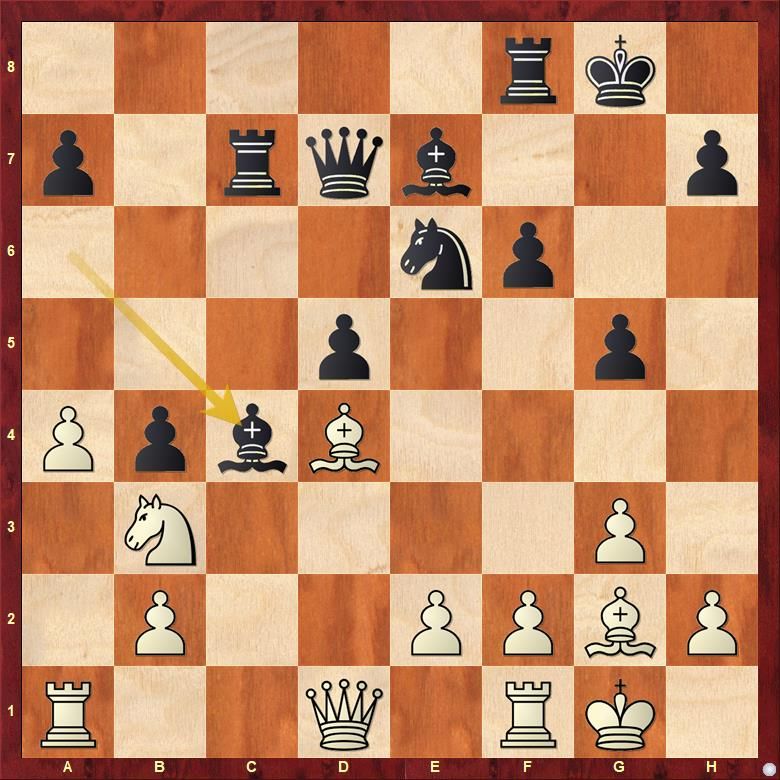 Position after 21...Bc4: Black is threatening Bxb3 followed by Nxd4 ... How should White respond?

A simple 22.Be3 would have worked just fine in the above position but Ding here played 22.Na5, not a mistake by any means but allows some concession. The game followed 22...Nxd4 23.Qxd4 Kg7 24.Rfc1 Bxe2 25.Rxc7 Qxc7 26.Re1 Bc5 27.Qxd5 Re8 and what Black had after these mass exchanges was a beautiful pair of bishops ready to breathe fire all over board. White's minor pieces in comparison looked dim and uncoordinated. 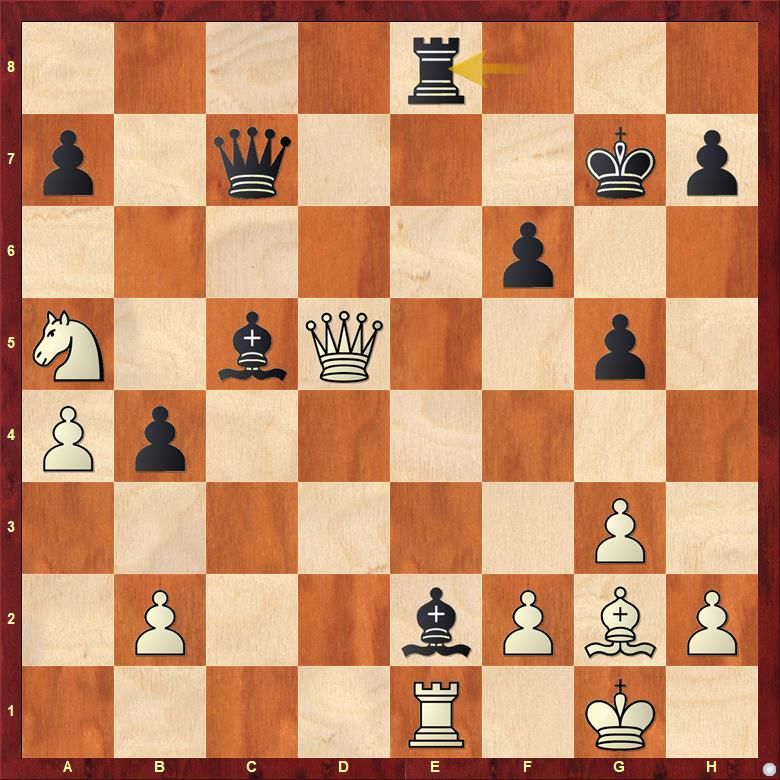 Black has just played 27...Re8, obviously he wants to keep the bishop pair. A move like 27...Qxa5 instead would be unwise. 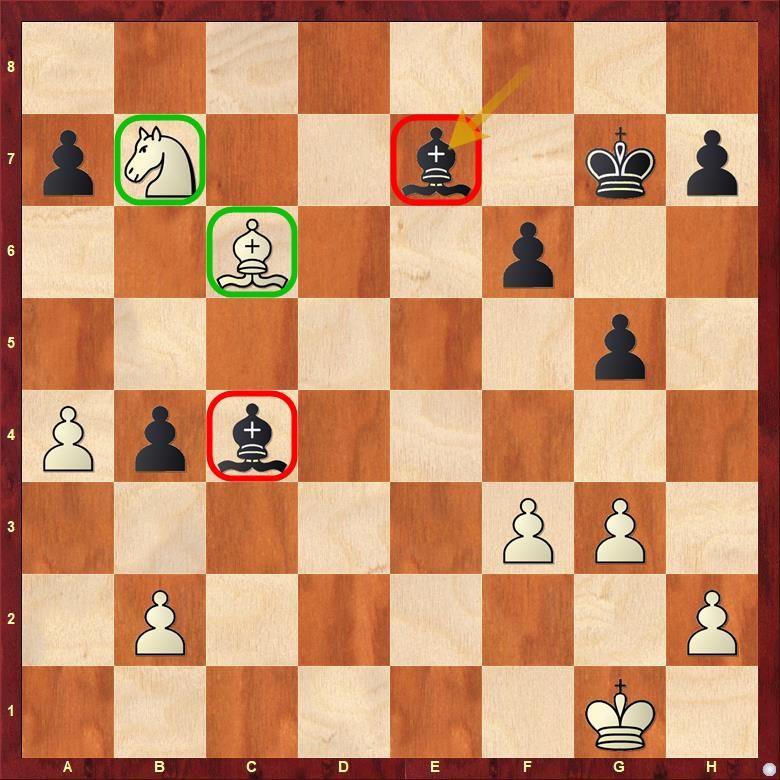 Position after 32...Bxe7 - compare Black's bishop pair with White's bishop and knight. Which would you rather prefer to have?

Magnus converted his advantage with flawless technique and the Chinese GM had to call it a day on move 60. We show you the turning points from here on. 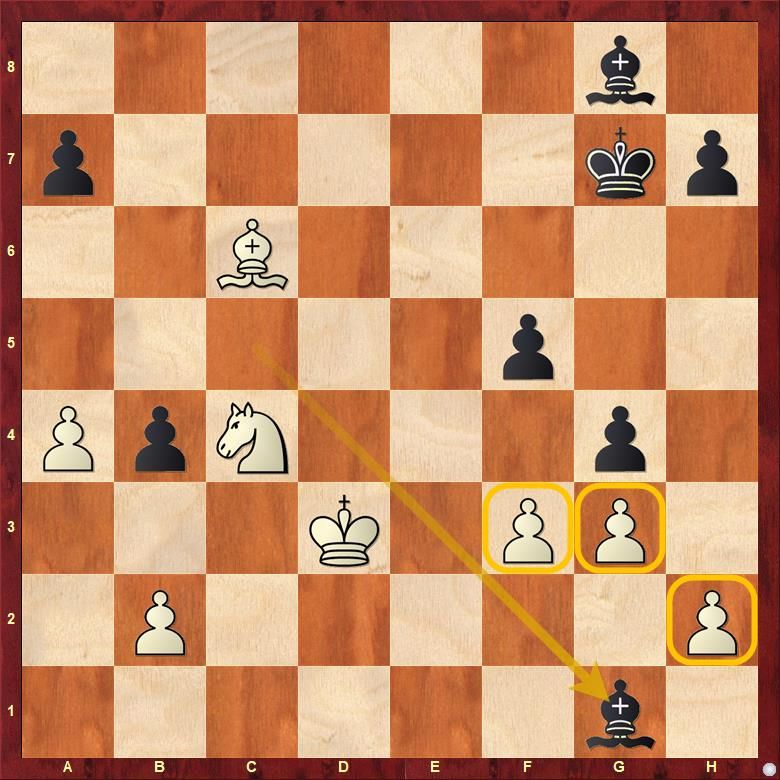 Position after 37...Bg1: Black is threatening to snap off all the pawns on dark squares. 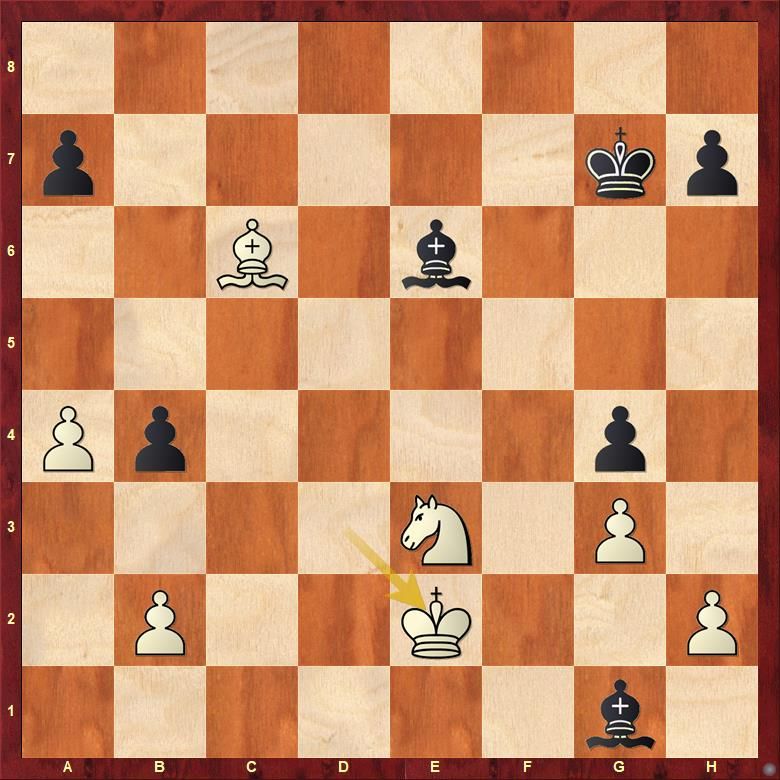 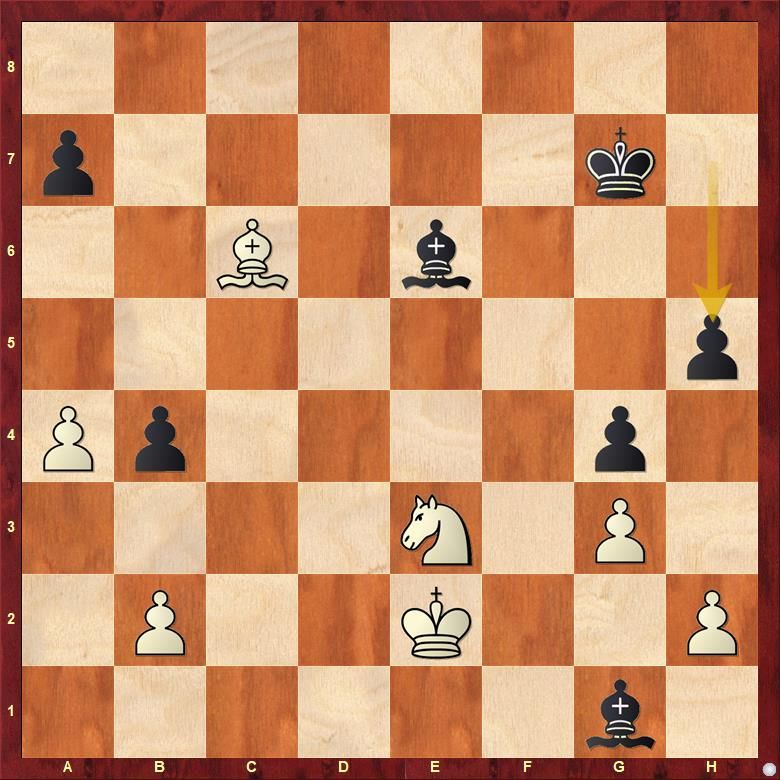 Black lashes out with h5! Now Bxh2 can be played as Kf2 h4 saves the bishop. 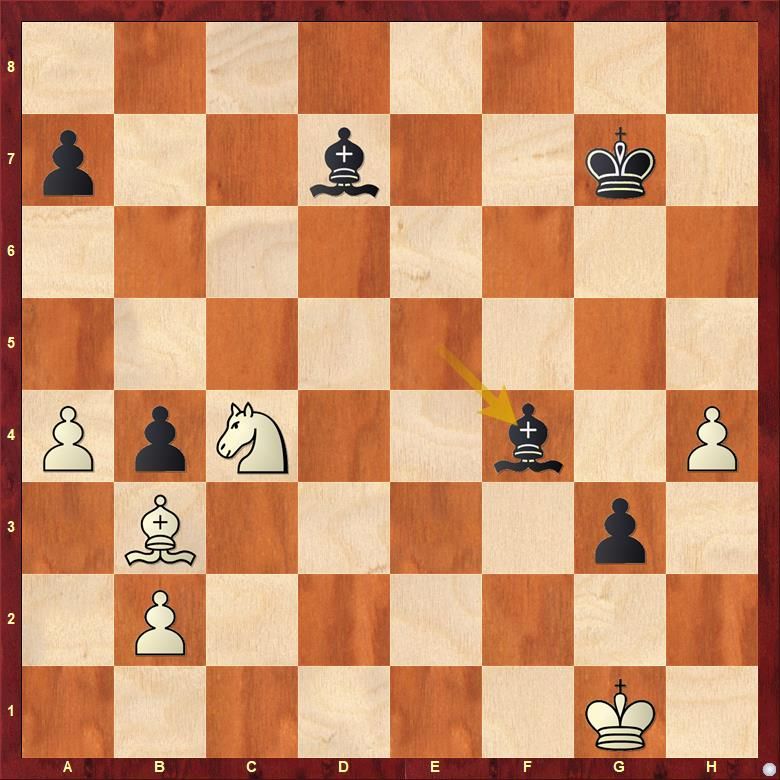 Black has taken the h2 pawn to advance his own g-pawn. Now all of Black's pawns are on dark squares and White's bishop is light-squared. 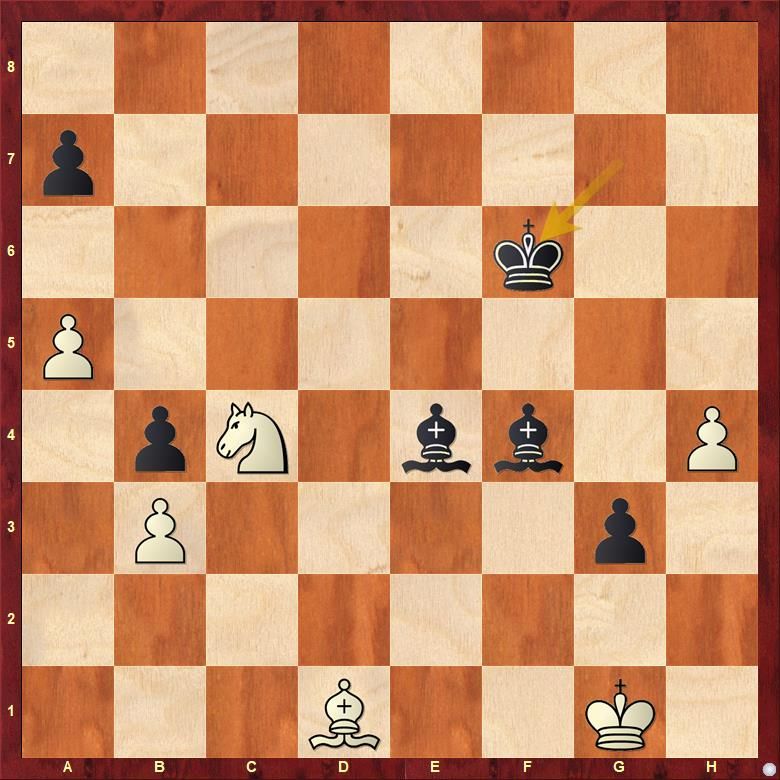 The white h-pawn too is perfectly under lock and key, right moment for the black king to move to the queenside! 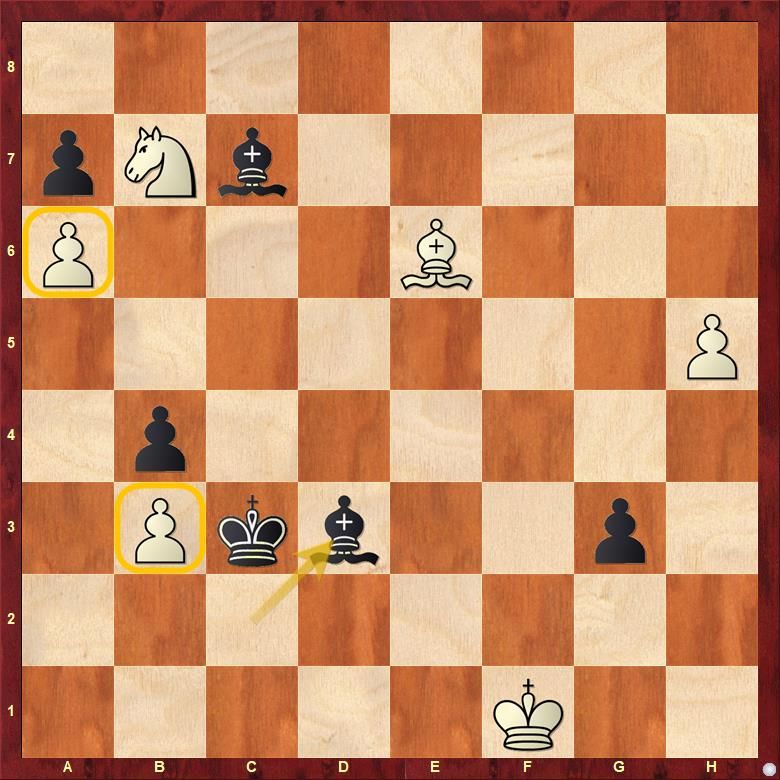 The black king has moved to the queenside. The pawns on b3 and a6 are both falling. Kg1 was played in this position and after Bxa6 White resigned! 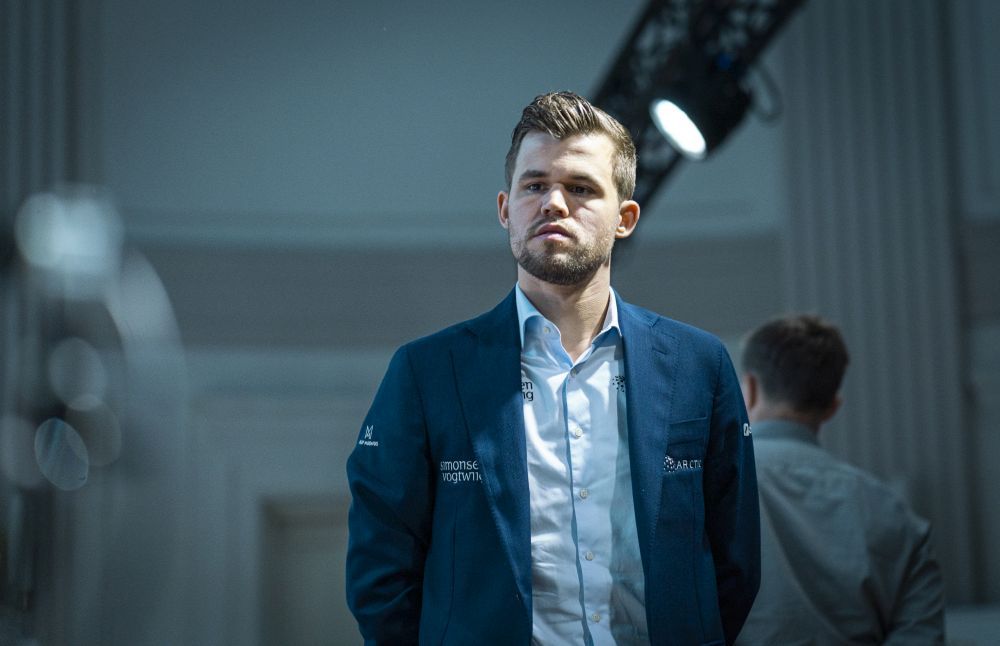 A clinical performance by the world champion - he still leads the field after eight rounds with 6.0/8 and more importantly has a live rating of 2881 which is just one point shy of his highest ever! | Photo: Lennart Ootes / Justin Kellar 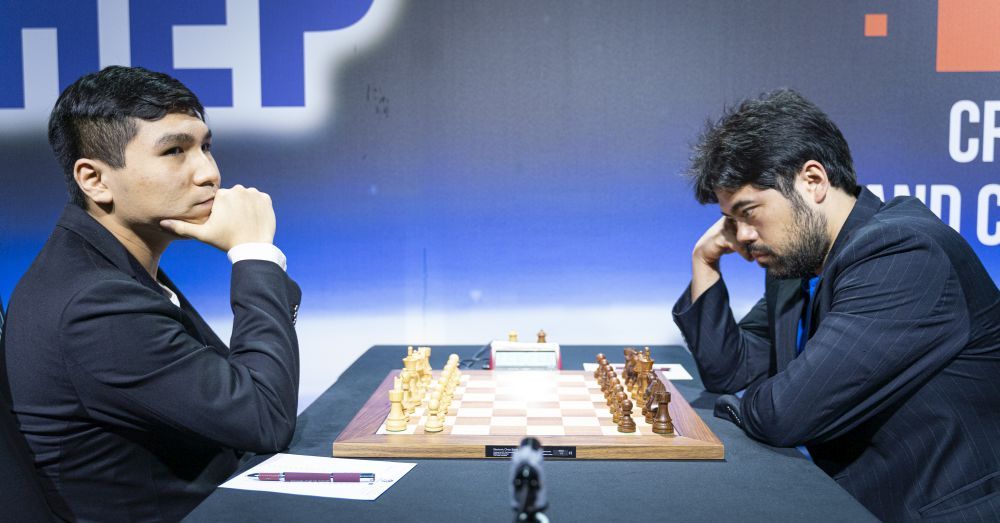 Wesley So is at Magnus's heels on 5.5/8 after defeating Hikaru Nakamura with the white pieces today ... Can he catch up with Magnus? | Photo: Lennart Ootes / Justin Kellar 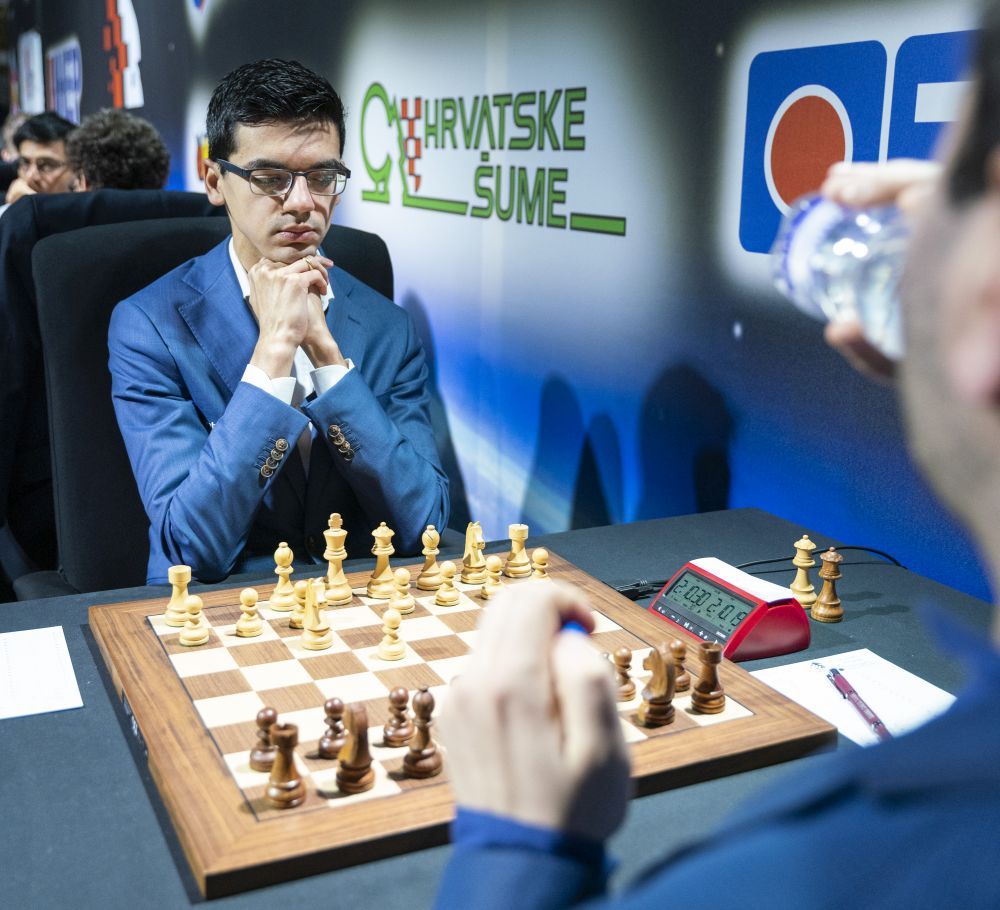 The third decisive game of the day was Anish Giri versus Shakhriyar Mamedyarov where Giri won with the white pieces in crushing style! | Photo: Lennart Ootes / Justin Kellar

It was a Sicilian Nyezhmetdinov-Rossolimo and following was the critical moment of the encounter: 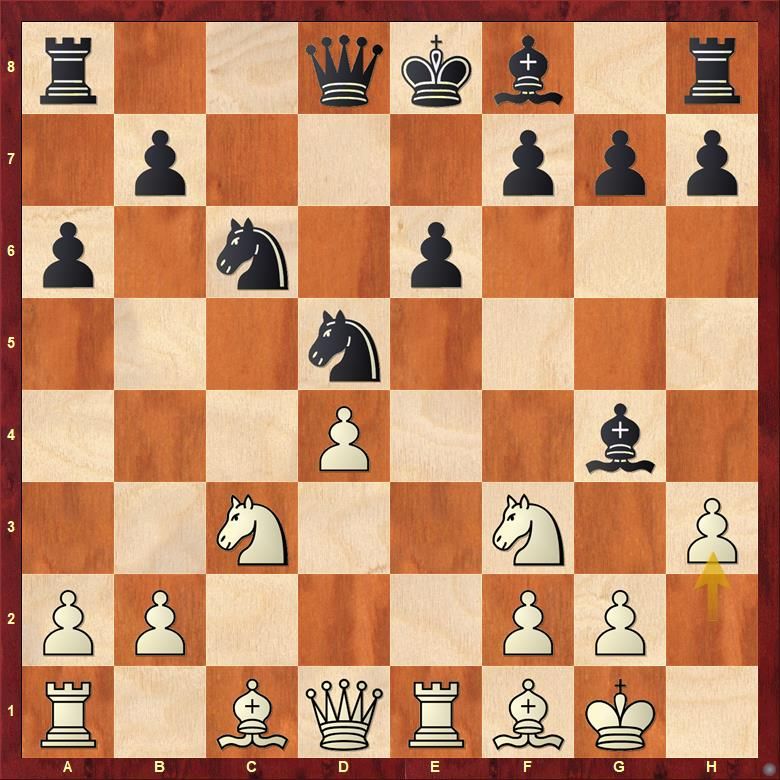 White has just played the move 12.h3 ... How should Black proceed? 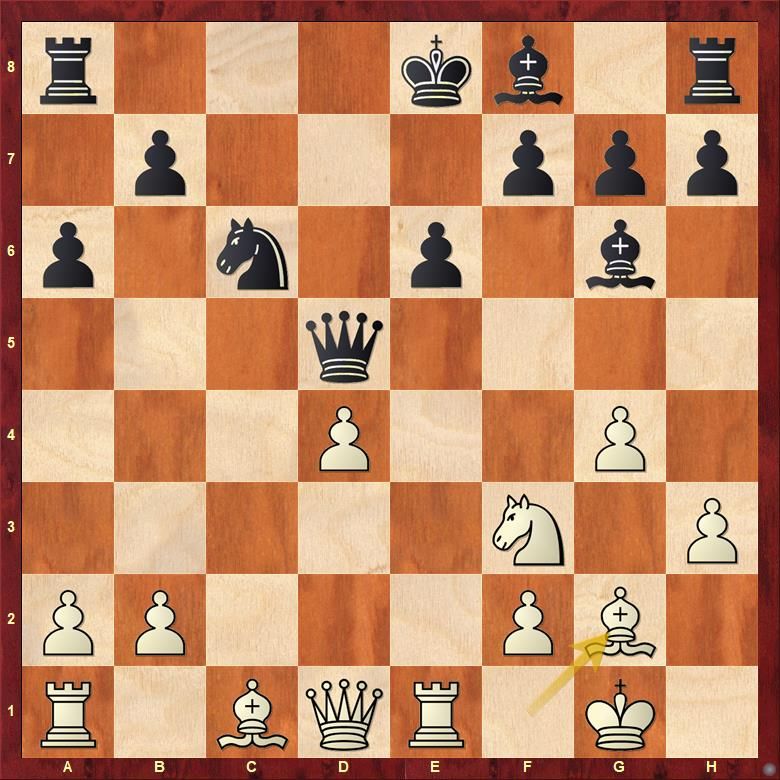 All sorts of nasty discoveries are in store now on the h1-a8 diagonal. Moreover, there are problems on the e-file that Black has to resolve.

Shakh lost it completely here and played the move 15...0-0-0? - this was simply giving the fight up. 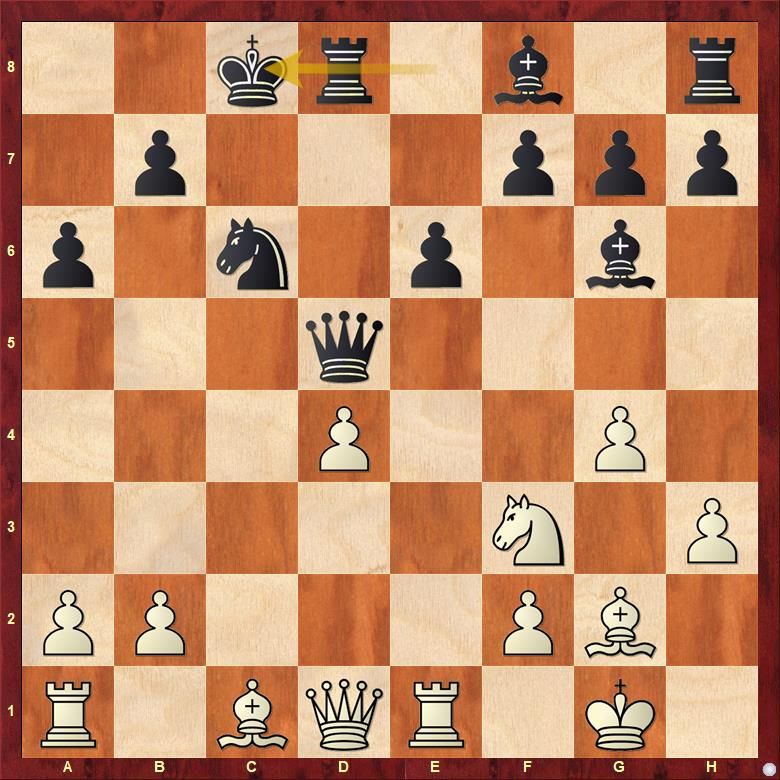 15...0-0-0 invites Bg5/ Ne5/ Rc1 followed by multiple other threats. There's not one but several moves that wins in this position.

The game continued 16.Ne5 Qxd4 17.Qf3! Rd5 18.Nxf7 and it was already a resignable position for Black. The Azerbaijani Grandmaster still played on till 31 moves before calling it a day. 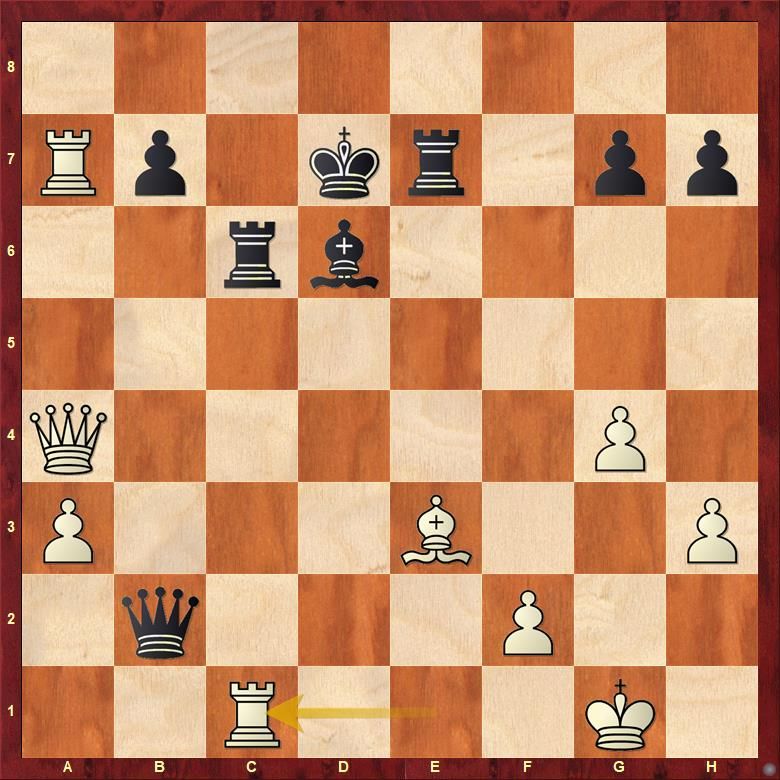 It was after 31.Rc1 in this position that Black gave up. 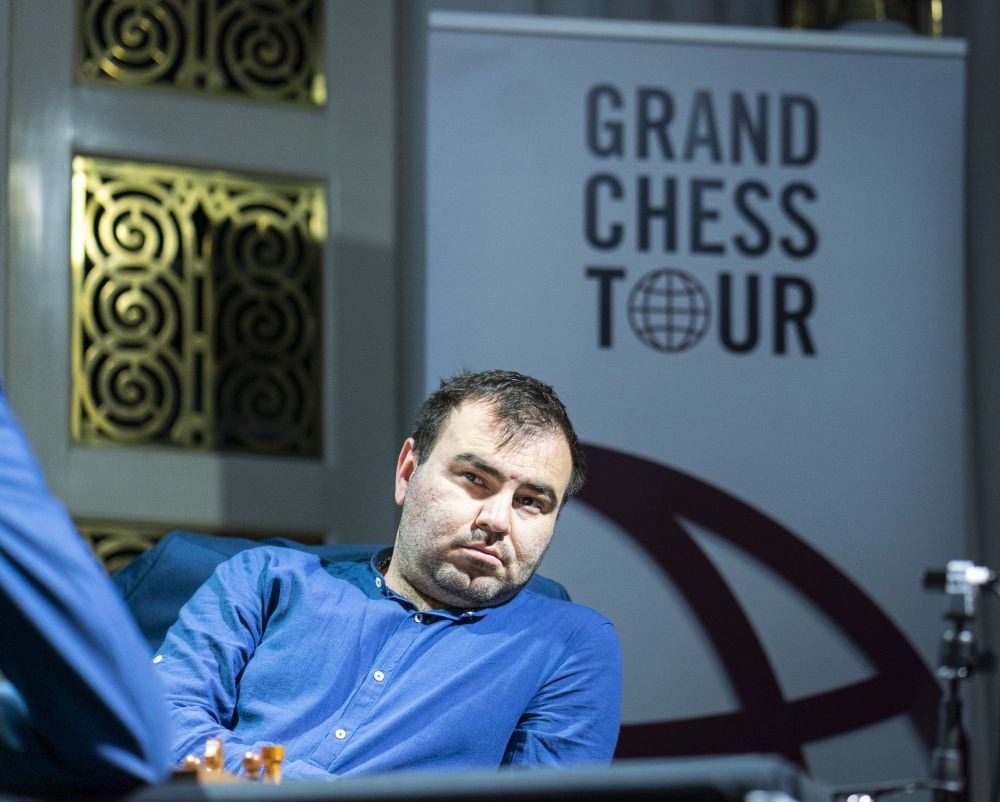 Shakhriyar Mamedyarov is at the bottom of the table along with Hikaru Nakamura, having scored just 2.5 points in eight rounds | Photo: Lennart Ootes / Justin Kellar 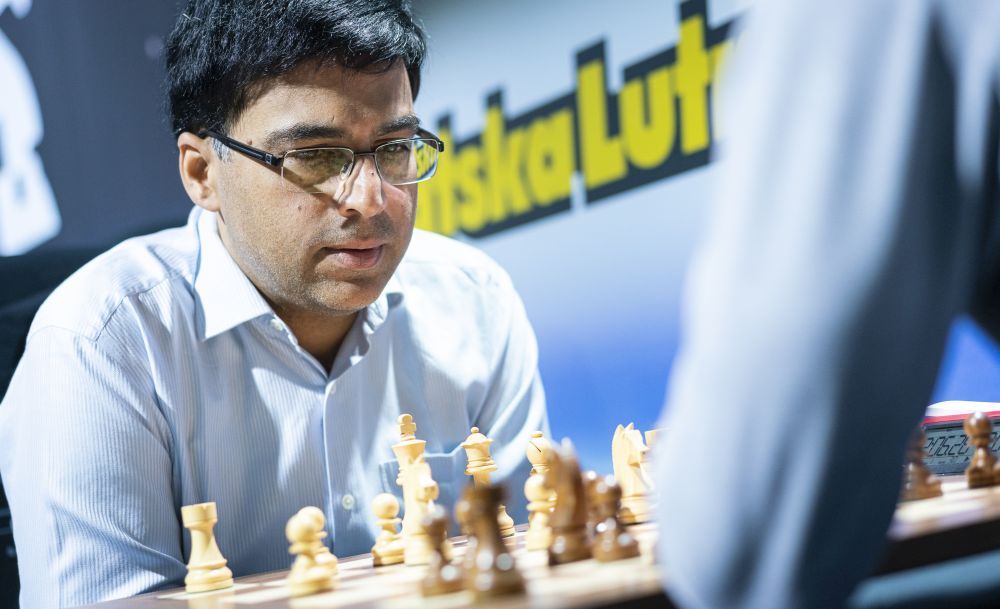 Vishy Anand was up against world no-2 Fabiano Caruana. The Madras tiger had a dominant position at one point but Caruana defended well and the game ended in draw (with RN vs R) after 54 moves | Photo: Lennart Ootes / Justin Kellar 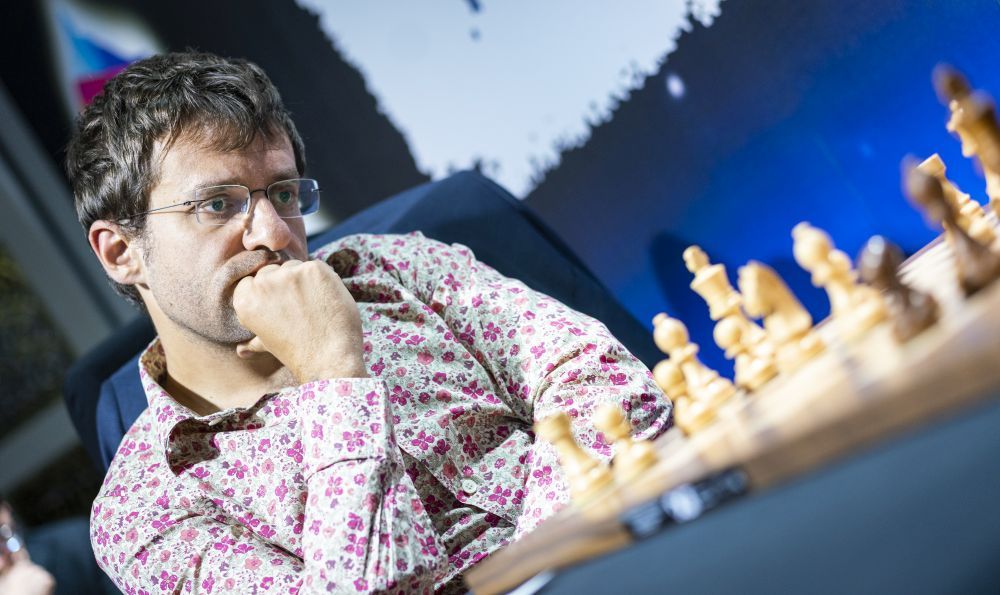 Levon Aronian drew against Ian Nepomniachtchi to take his score to 4.5/8 and is on the third place along with Caruana and Nepo | Photo: Lennart Ootes / Justin Kellar 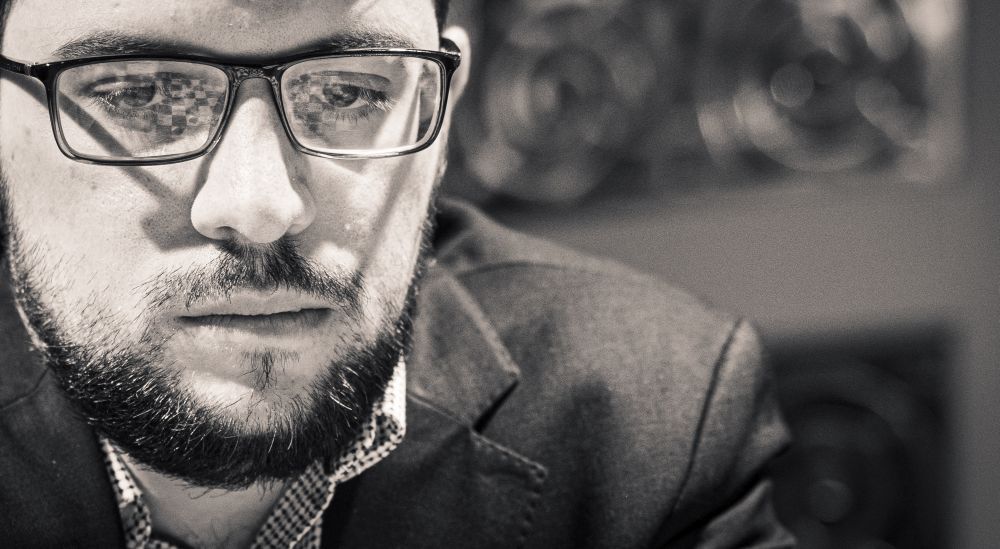 Maxime Vachier-Lagrave is on 3.5/8 and drew his round 8 game against Sergey Karjakin today | Photo: Lennart Ootes / Justin Kellar