The World Chess Champion Magnus Carlsen has really been showing phenomenal dominance over the current chess scene with his back-to-back tournament wins. On Sunday he put another feather in his cap by winning the second leg of Grand Chess Tour 2019 in Zagreb, Croatia. This was a truly elite event with twelve of World's top Grandmasters competing but Magnus's domination over the field culminating into a sizzling final round victory was unmatched and almost unchallenged. Exactly how much ahead of the curve the Norwegian really is? The question has been speculated multiple times in the past week with none other than Kasparov comparing him to Fischer and himself at his peak. In this report we bring you the move by move analysis of Magnus's crushing last round game, photos, and more.

It is Magnus, and Magnus all the way, in Croatia! 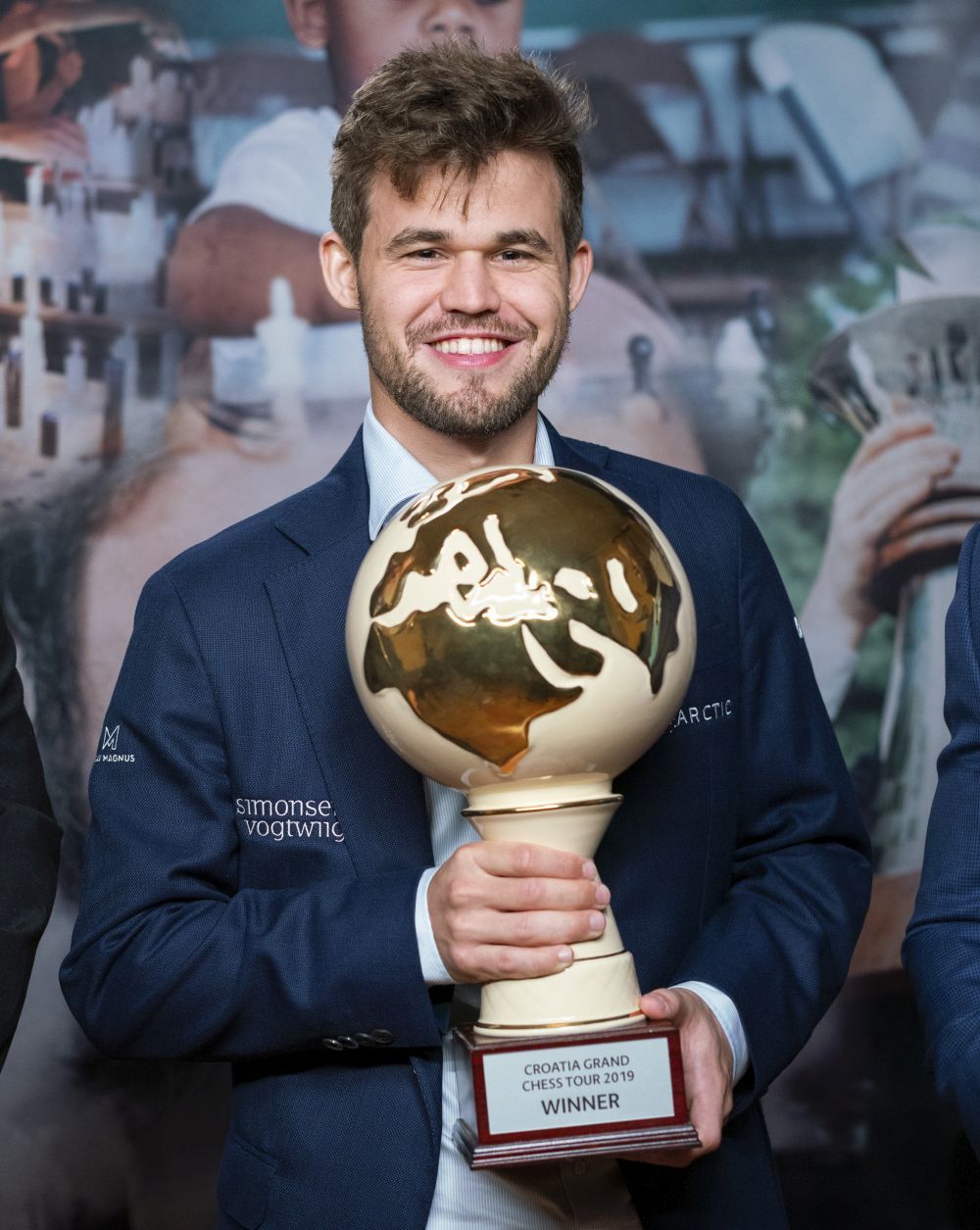 Magnus Carlsen brought Croatia Grand Chess Tour 2019 to a sparkling end by registering a thumping victory over Maxime Vachier-Lagrave in the last round and winning the event a clear point ahead of the entire field. This extends his streak of tournament wins to eight in a row now and takes his live rating to a stratospheric 2881.7 - what a champion! | Photo: Lennart Ootes & Justin Kellar / Grand Chess Tour

Magnus Carlsen was up against Maxime Vachier-Lagrave in the final round of Croatia Grand Chess Tour 2019. Being just half a point ahead of his nearest pursuer Wesley So, the World Champion couldn't take this encounter lightly if he had to win the tournament. He had the White pieces and he knew he had to push for the full point - what came was a performance so clinical in style that it is worthy of inclusion in any textbook. One of the key features that distinguishes Magnus's play in recent times is his more and more preference for mainlines. In the early days he was better known for adopting quirky sidelines and eschewing theoretical battles out of the opening. But Magnus of today is evidently more experienced, more universal in his approach. Yesterday it was a Grünfeld defense and the way he outplayed his French opponent, who is himself a renowned specialist of the line, is simply stuff of class. 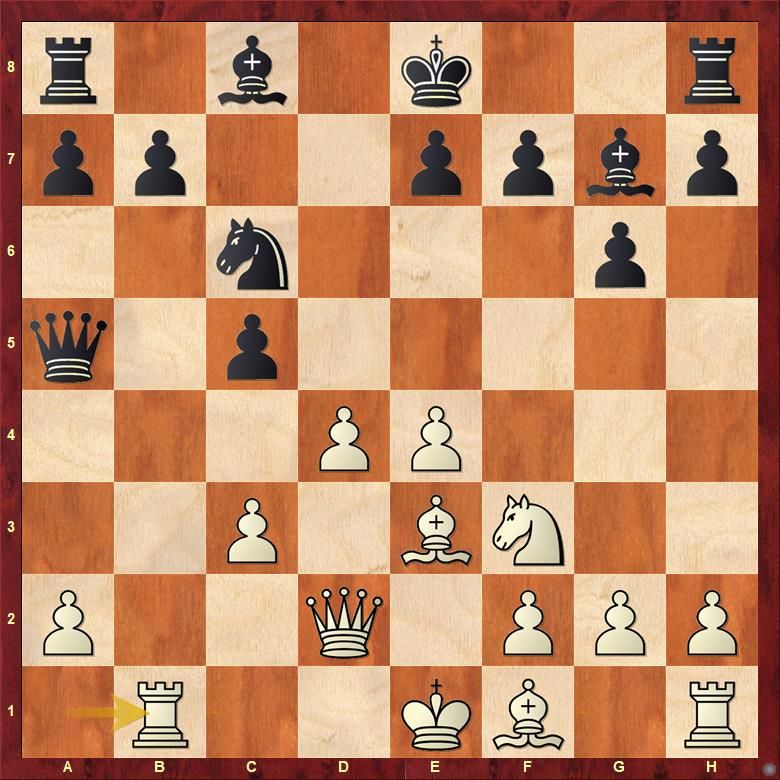 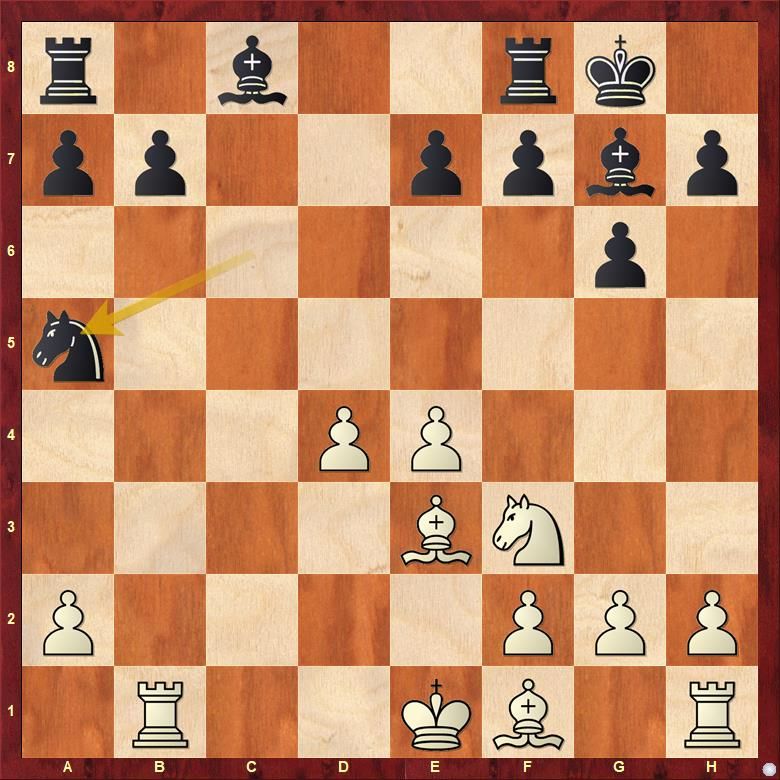 Position after 12...Nxa5: The knight on a5 is misplaced, White wants to exploit this and roll his d-pawn down the board. Black, on the other hand, hopes to create counter play with b6 followed by Bb7 in the typical hypermodern style.

13.Bd3 was played in the above position, providing an early support to the e4 pawn, and Maxime kind of deviated from the standard course here going 13...Bg4 14.0-0 Bxf3 15.gxf3 e6 and crippling White's pawn structure. 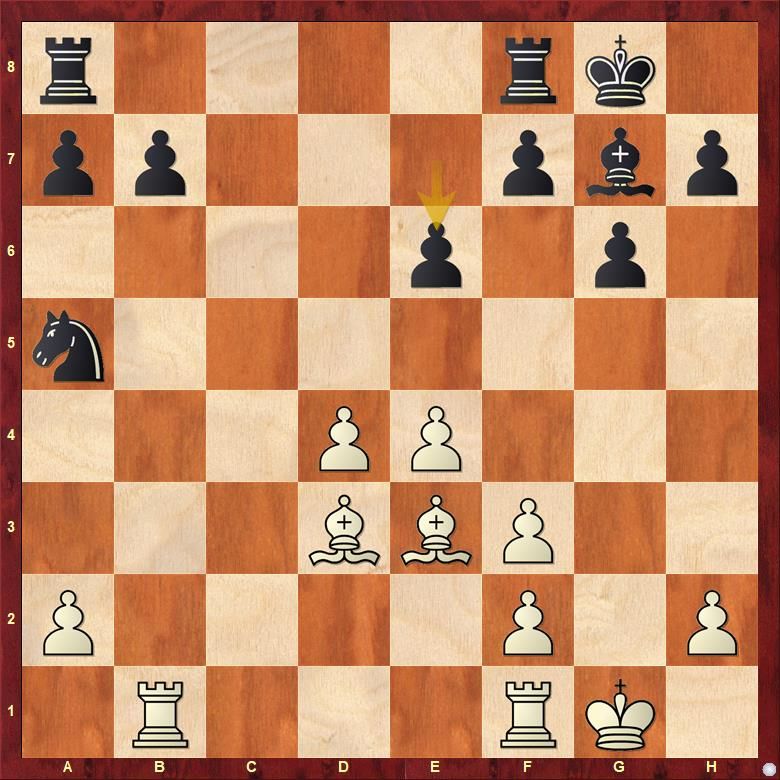 Position after 15...e6: Later, after the game, Magnus described this idea of leaving White with a beautiful bishop pair just to double up pawns on the f-file as "risky" - his point was well demonstrated in the game.

Next came 16.Rfd1 Rfd8 17.Bf1 b6 18.Ba6 and now White controlled the important c8 square making it difficult for Black to get his rooks on the c-file. The power of bishop pair started to become apparent. 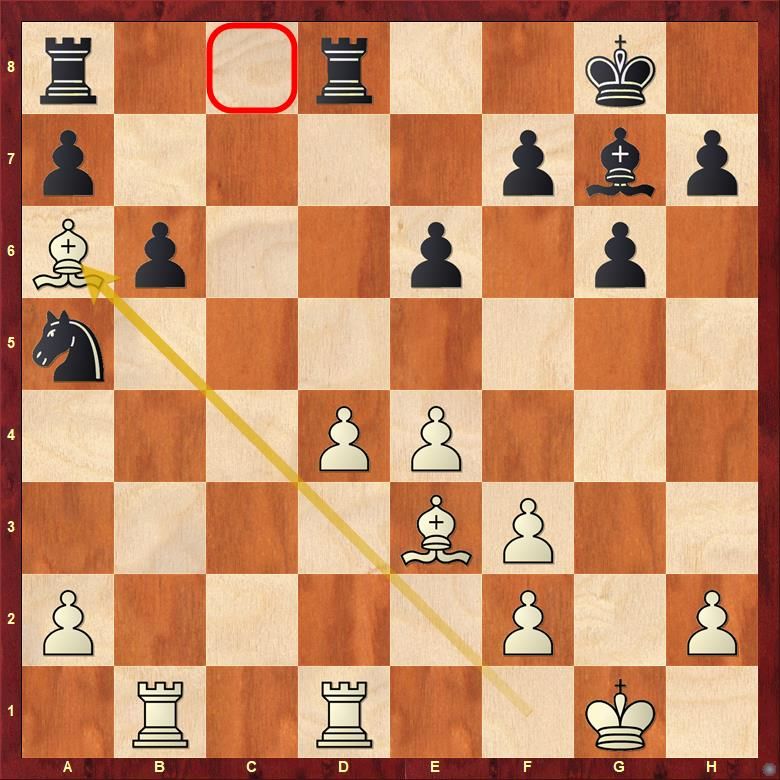 Black decided here to make use of the semi-open d-file instead, with 18...Rd6 19.Rbc1 Rad8 the play was focussed on the d4 square. 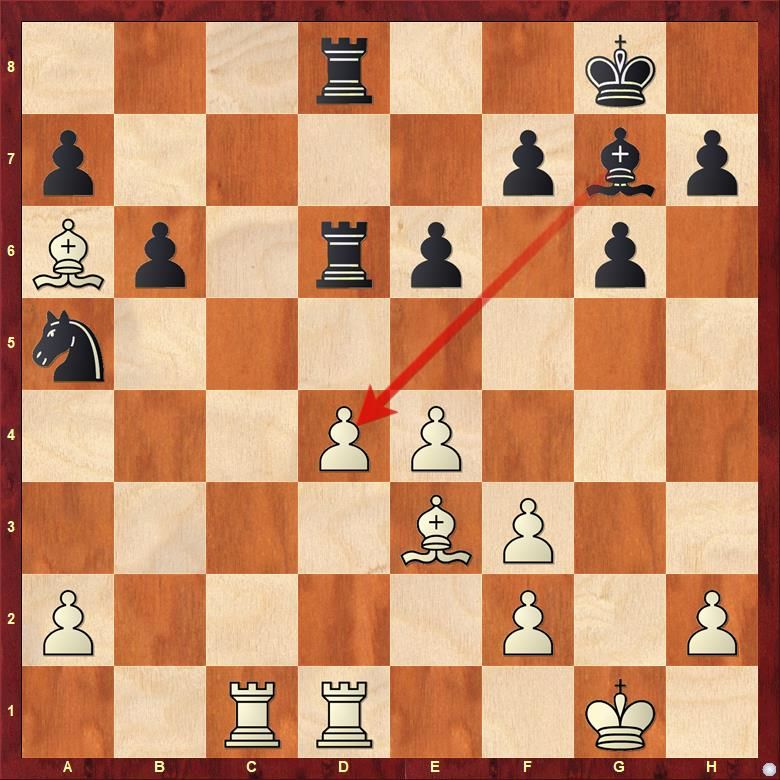 How does White deal with the pressure on the d4 pawn?

Magnus found creative ways to resolve this issue, 20. Bg5 f6 21. Be3 was played (Notice, 20.R8d7 Rc8+ 21.Bf8 Bb5 followed by Bh6 is absolutely crushing) and now Black had weaknesses along a2-g8 diagonal. 21...f5 is simply met with 22.Bg5 again, hence Maxime prepared 21...h6 first with the idea of going f5 next and opening up the bishop. Curiously enough this sent Magnus into a 20 minutes think. 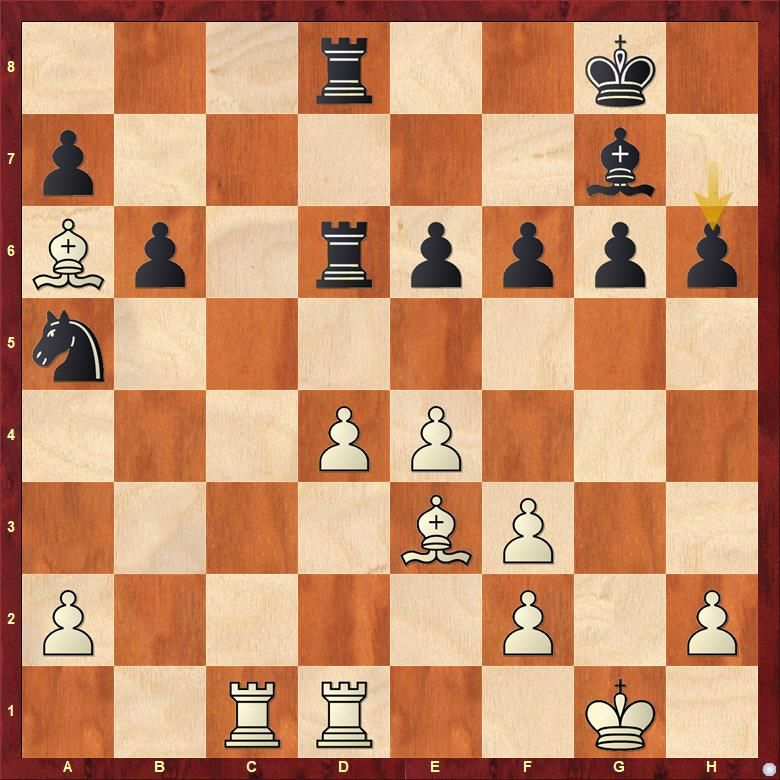 Position after 21...h6: Give yourself 20-25 minutes in this position and see if you can find the idea that the World Champion found!

A great player understands which positions to spend more time on, the World Champion had his reasons to invest his time here, and after about 20 minutes of thought he came up with 22.Bb5 - he sensed that his bishop had served its purpose well on a6 - and after Black played 22...f5 he burst out with 23.d5! 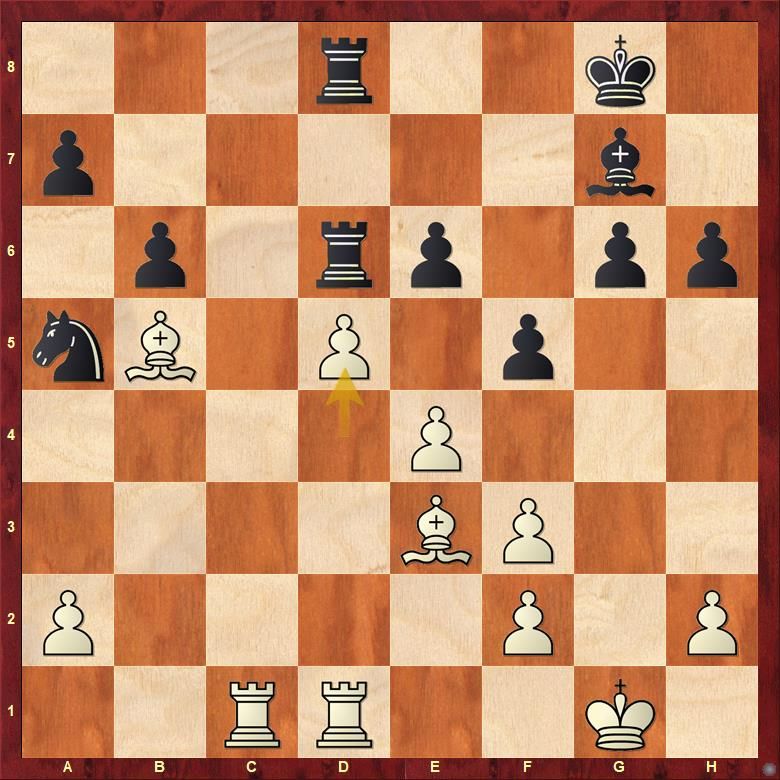 With 23.d5! the position now explodes!

What happens if Black takes 23...exd5? Well, then comes 24.Bf4! Rd6 25.Bc7 followed by exd5 - supported by the absolutely menacing bishops there's no stopping the d-pawn here! Understandably, Maxime played 23...g5, stopping Bf4 and Magnus just nudged his bishop back with 24.Bd2, and now Bb4 was a strong threat. 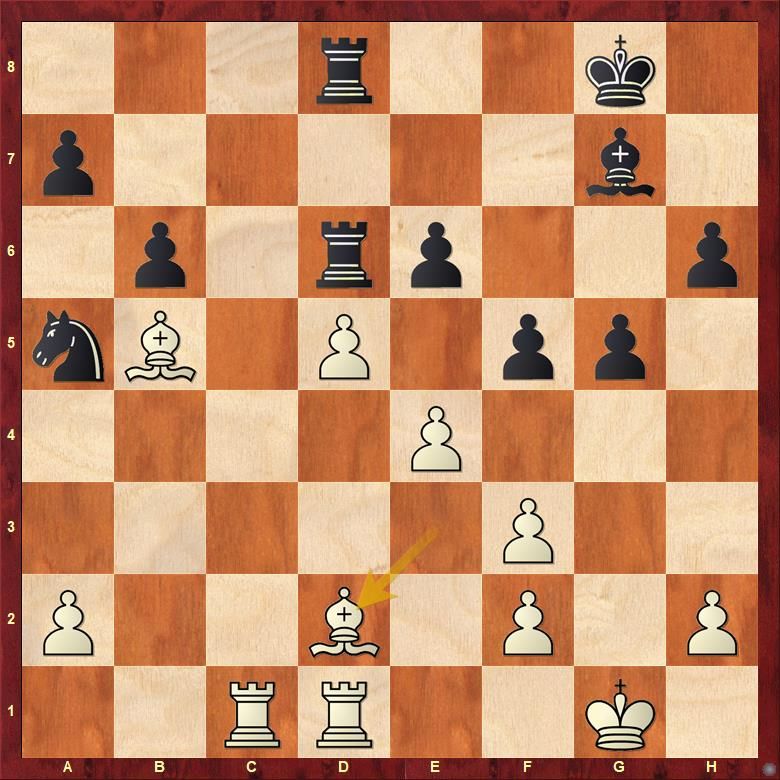 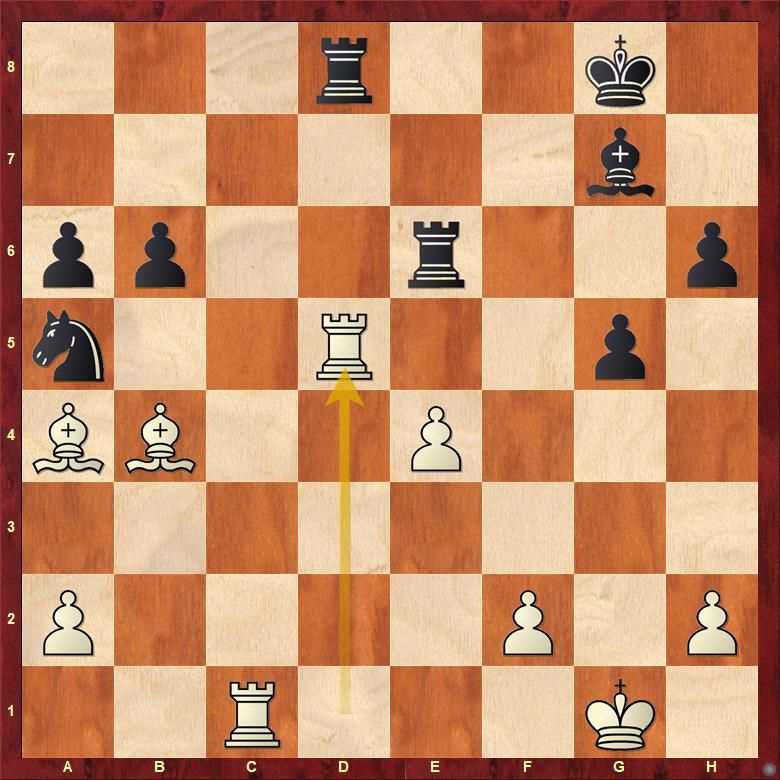 White has just captured on d5 with 28.Rxd5 - What would you do if you were in Black shoes? 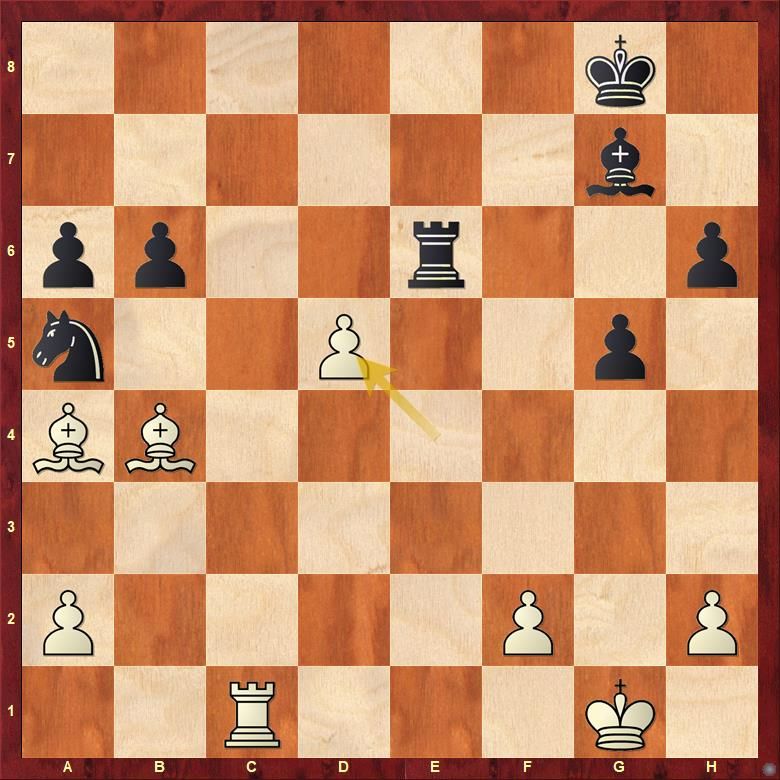 Such a strong d-pawn would be a nightmare for any Grunfeld player! 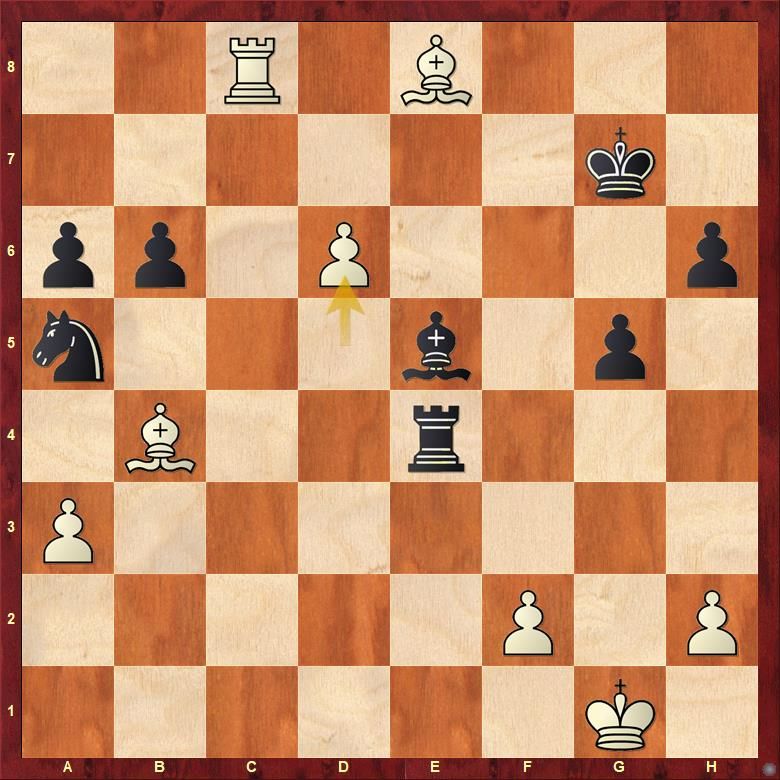 Position after 33.d6 - One of the reasons why Black has no counterplay here is the ultra-safe position of the white king on g1. But MVL still finds ways to create complications which goes on to show how combative a player he is. 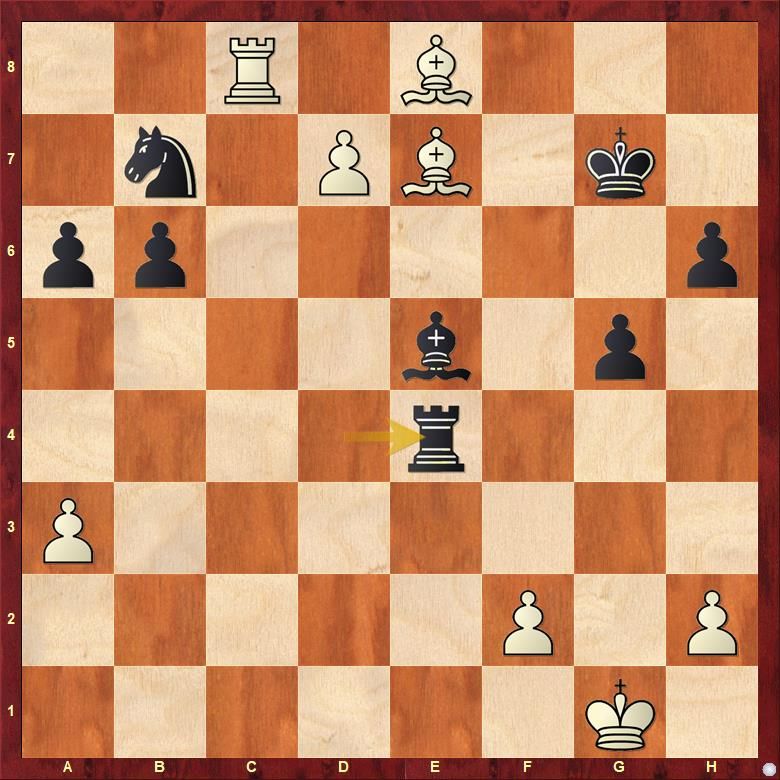 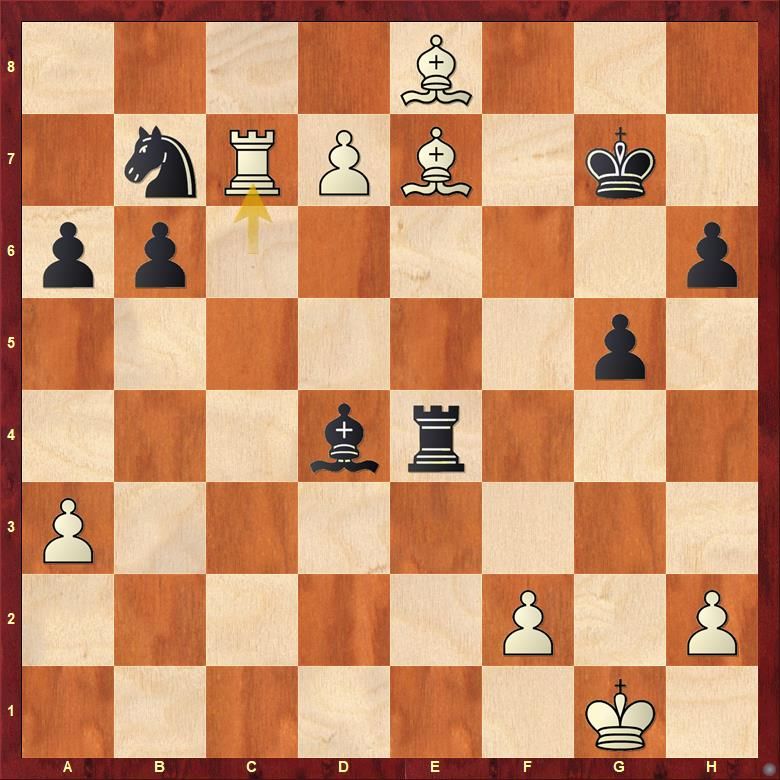 It was in this position Maxime Vachier-Lagrave resigned. The position is completely hopeless, for instance if 37...Rxe7 then after 38.Rxb7 there's no way to stop d8=Q without giving up a whole rook. A truly crushing victory by the World Champion! 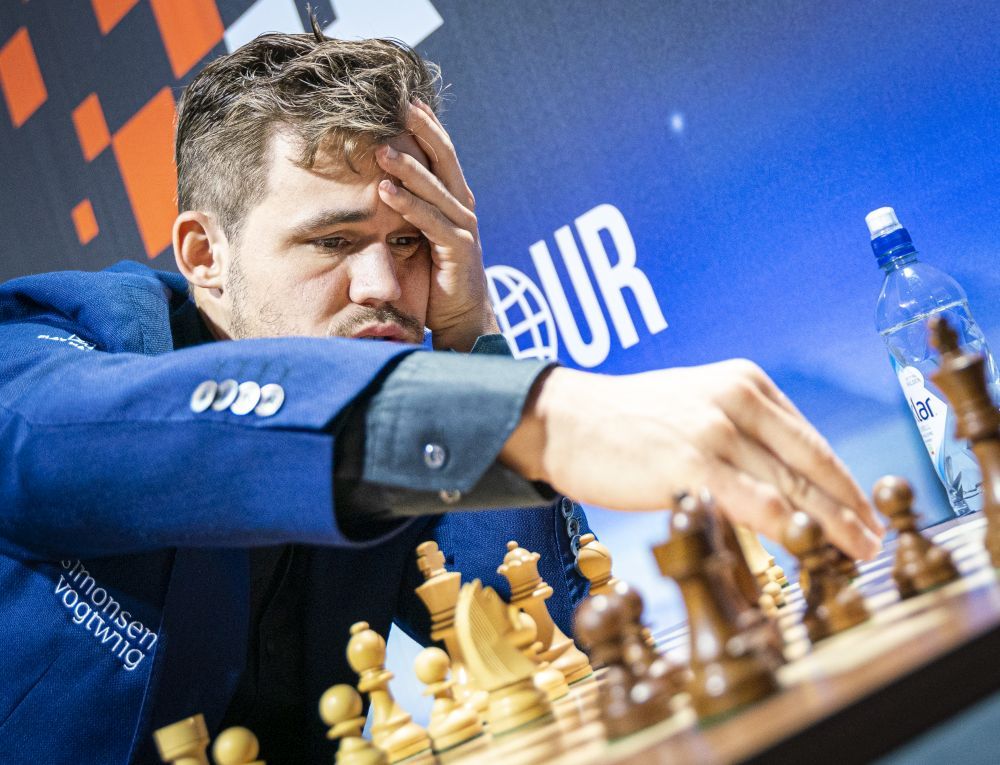 Magnus Carlsen in action against MVL on Sunday. Very few have dominated the chess scene the way Magnus is doing today. Is he the greatest of all time? | Photo: Lennart Ootes & Justin Kellar / Grand Chess Tour 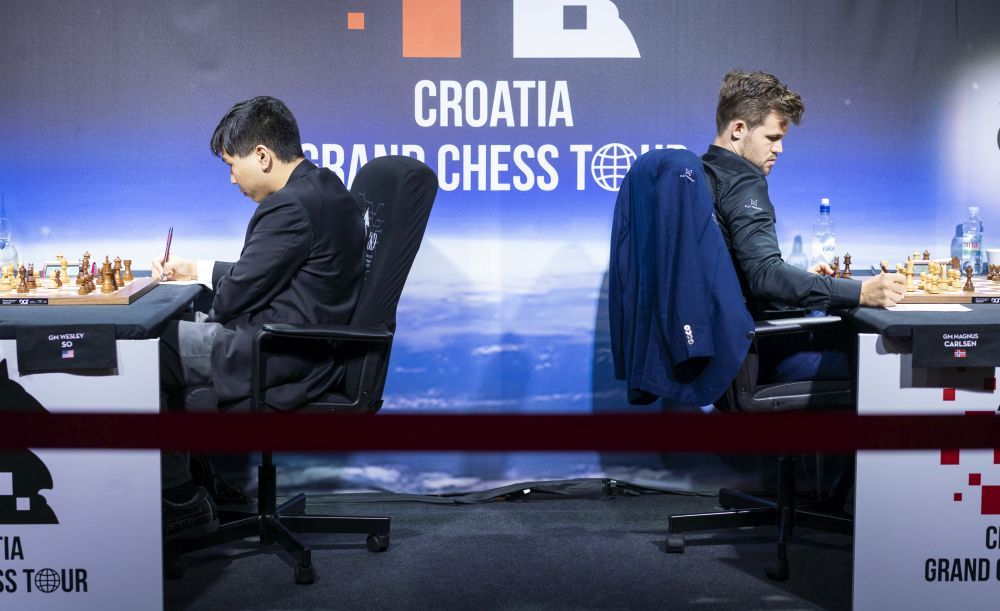 Going into the final round, Wesley So was just half a point behind Magnus. He drew his last game against Levon Aronian to finish second with 7.0/11 | Photo: Lennart Ootes & Justin Kellar / Grand Chess Tour 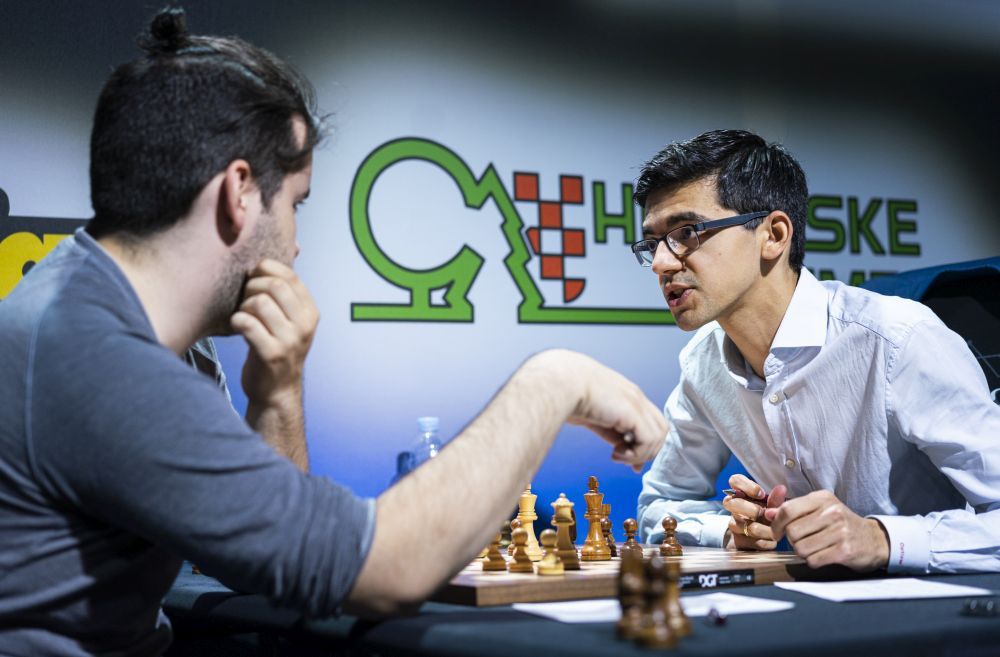 The only other decisive result of the day came from Ian Nepomniachtchi versus Anish Giri where the latter won to take his score to a respectable 5.5/11 and finish joint fifth along with Nepo and Ding Liren | Photo: Lennart Ootes & Justin Kellar / Grand Chess Tour

Ian Nepomniachtchi versus Anish Giri, Round 11 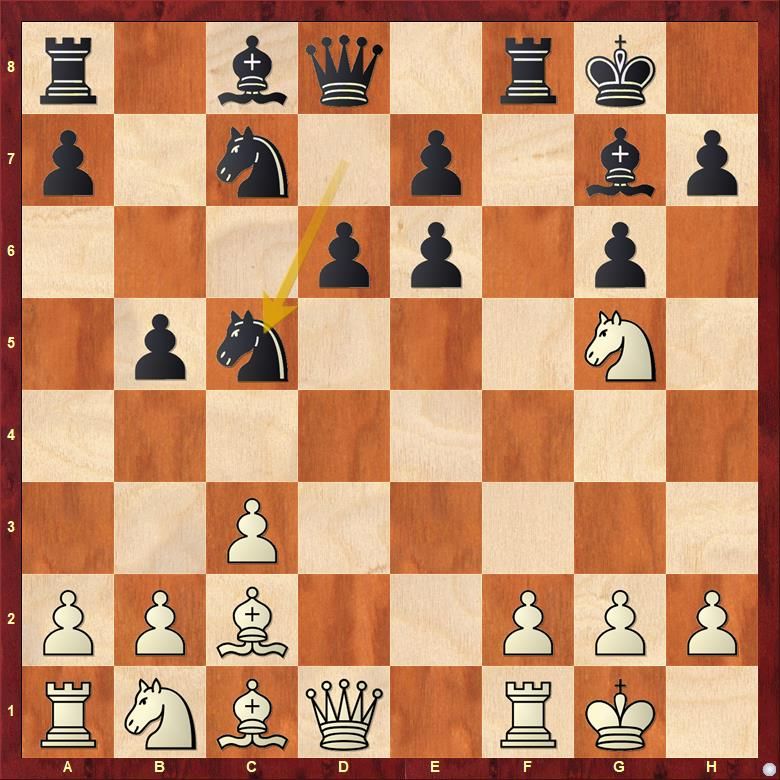 The above was the critical moment of the Nepo-Giri encounter. It is White to move and practically there are multiple ways to continue the game. Moves like 13.Re1, 13.Be3 etc are all decent but Nepomniachtchi lashed out with 13.Nxh7 here - a premature sacrifice. The game continued 13...Kxh7 14. Qh5+ Kg8 15. Bxg6 Rf6 16. Qh7+ Kf8 17. Bh6 Rxg6 18. Qxg6 Bxh6 19. Qxh6+ Ke8 and White simply didn't have enough compensation for the sacrificed material. Giri went on to win the game fairly comfortably in 36 moves. 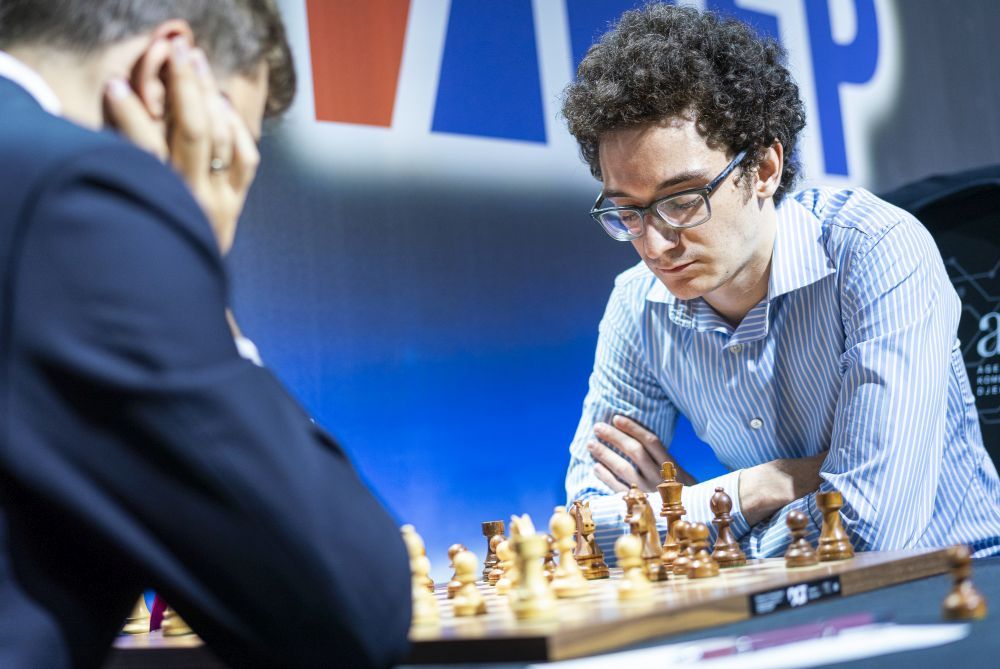 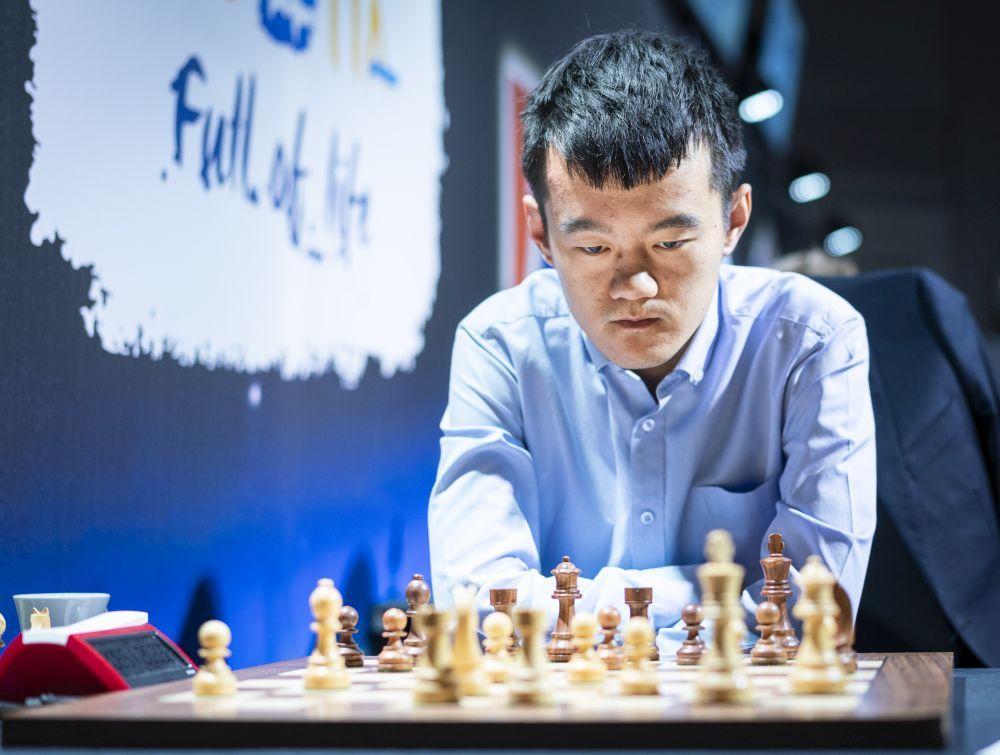 Ding Liren held Shakhriyar Mamedyarov to a draw in the final round playing the black side of the Semi-Tarrasch | Photo: Lennart Ootes & Justin Kellar / Grand Chess Tour 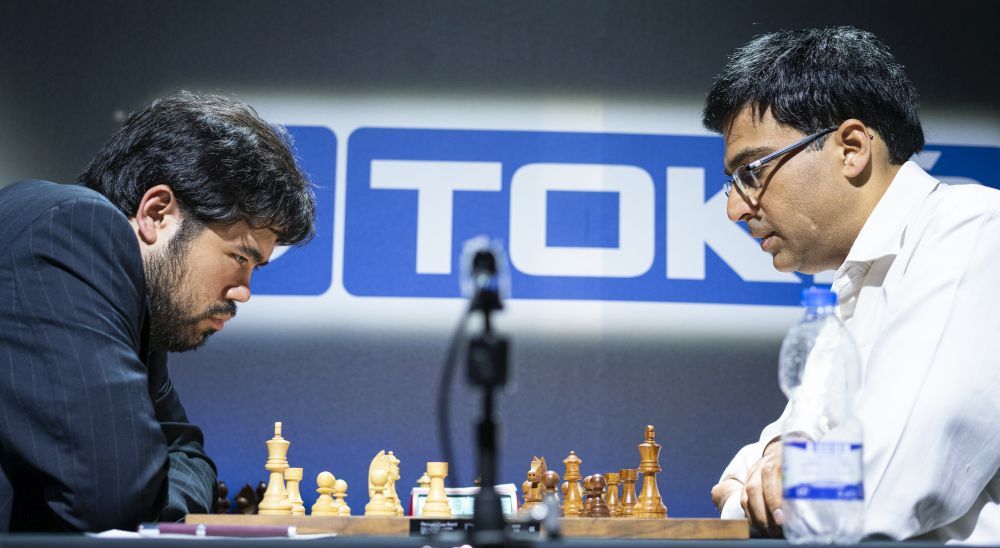 Vishy Anand drew against Hikaru Nakamura to finish ninth in the event with MVL and Mamedyarov on 4.5/11, while Nakamura finished at the bottom with 4.0/11 | Photo: Lennart Ootes & Justin Kellar / Grand Chess Tour