A game where the attacker never wielded a sword, but the head fell!

"I can live with doubt and uncertainty and not knowing. I think it is much more interesting to live not knowing than to have answers that might be wrong" - Richard P Feynman. Carlsen is ok with anything, or so it looks like whether dealing with hundred pieces or one piece. The point is, he has a unique way to converse with his pieces and make them obey his command. Fortunately for him, his opponents too obey his command on most occasions and hence he prevails more often than not. Photo: Lennart Ootes/Grand Chess Tour

Chess is a very difficult game to understand, even for the greatest masters. All that they succeed in doing is to cope up with this predicament and they manage to keep their nose up in the water as long as it is possible.

Tal said, "I began to succeed in decisive games (all game are decisive), perhaps when I realised a very simple truth: not only was I worried, but also my opponent."

There was a great poet in Tamil called Kannadasan (கண்ணதாசன்) who wrote:

It means, life is full of problems and every one has his own share of worries. Whatever be the difficulty or misery, it doesn't go off if one is just sulking in it. One has to cope up with it and look for ways to improve and move forward!

Chess is similar, if your opponent poses you with a particular problem, your mind will assume something and pose you with different problem and would magnify things unduly!

Seldom one realises that they can pose problem to their opponent and he too has a mind especially when they face likes of Capablanca, Fischer, Karpov, Carlsen. 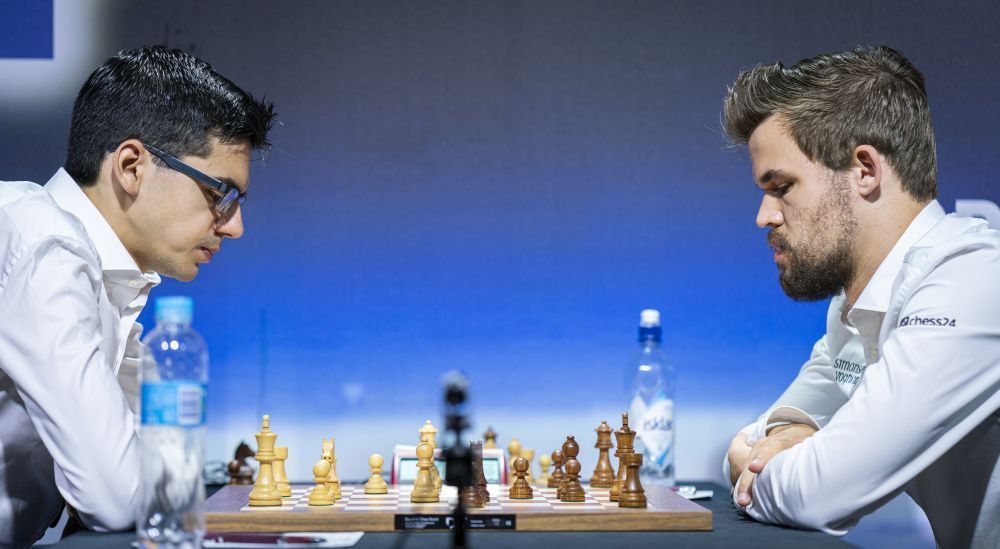 Giri-Carlsen in the opening round was nothing less than fireworks | Photo: Lennart Ootes/Grand Chess Tour 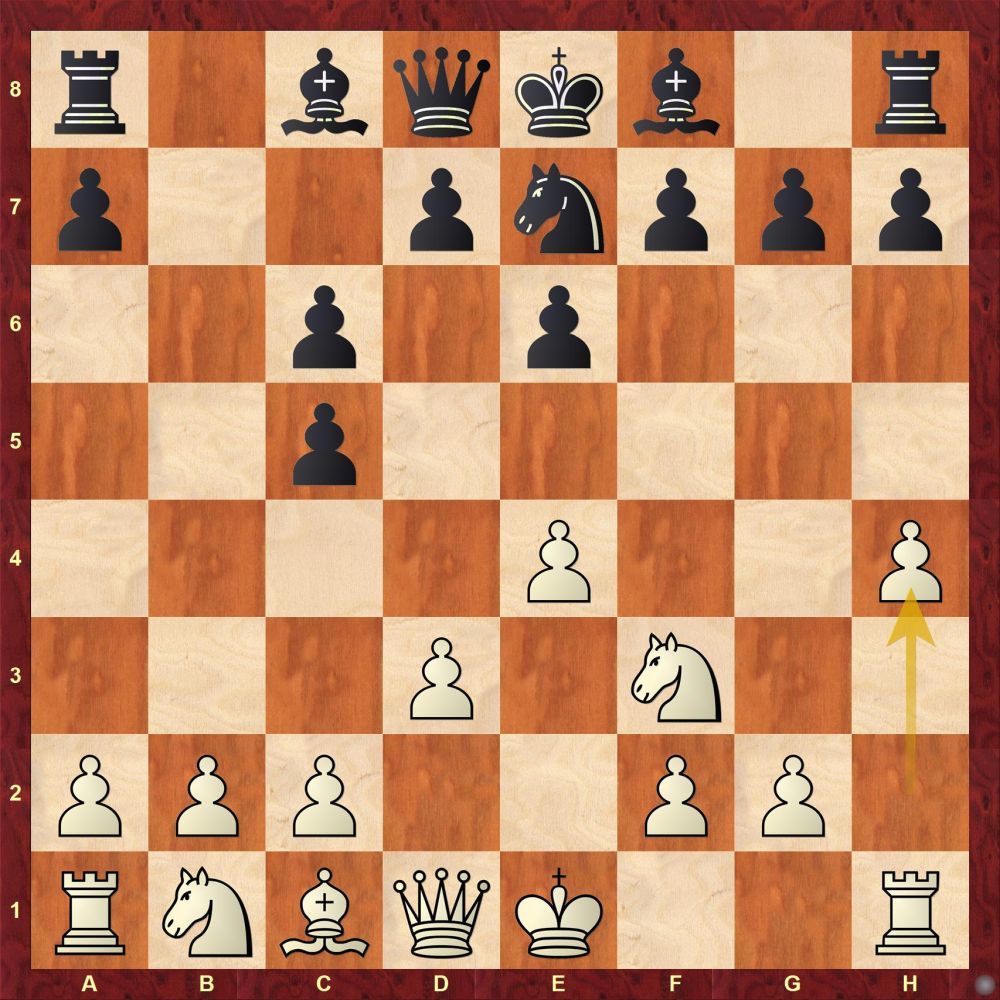 This pawn has been moving so early to the fourth square since Steinitz time but more often now, after "human-like" thinking Alpha pushed it many times! 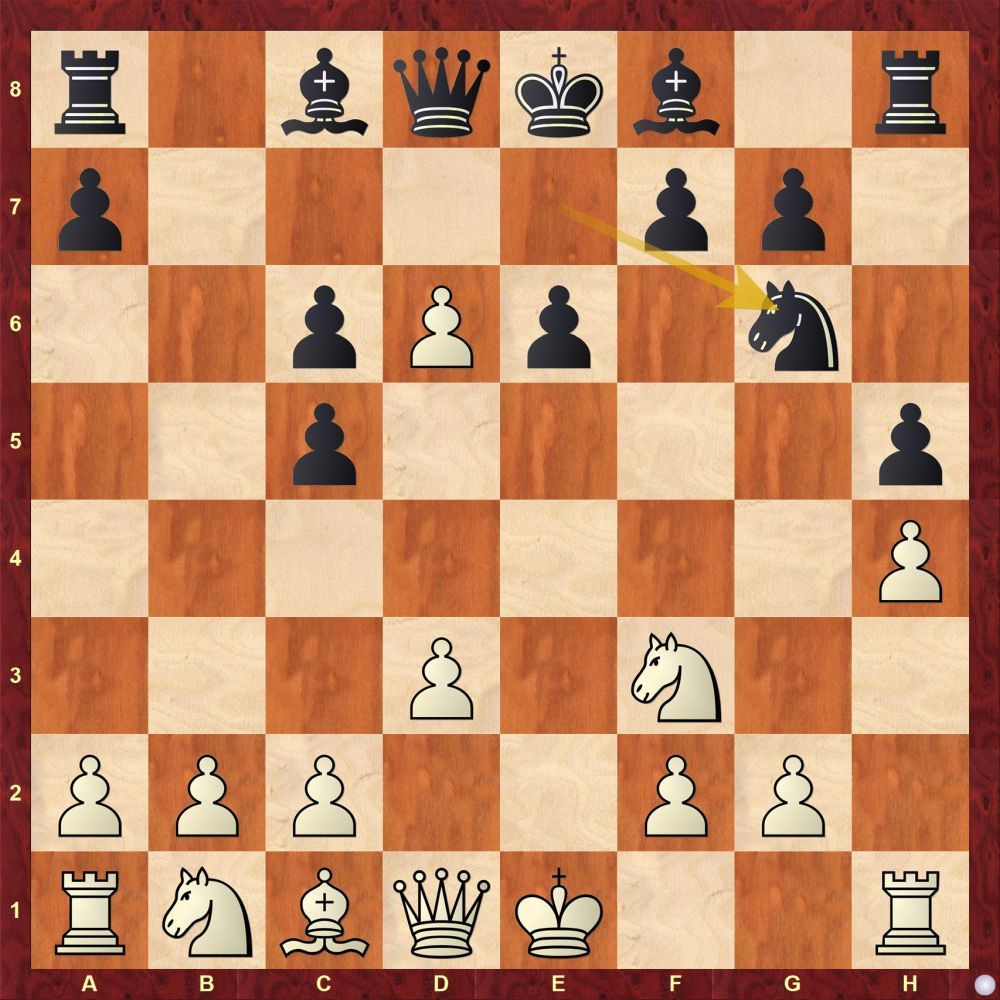 This can be officially dubbed as a "novelty". An earlier game went 8...Nf5 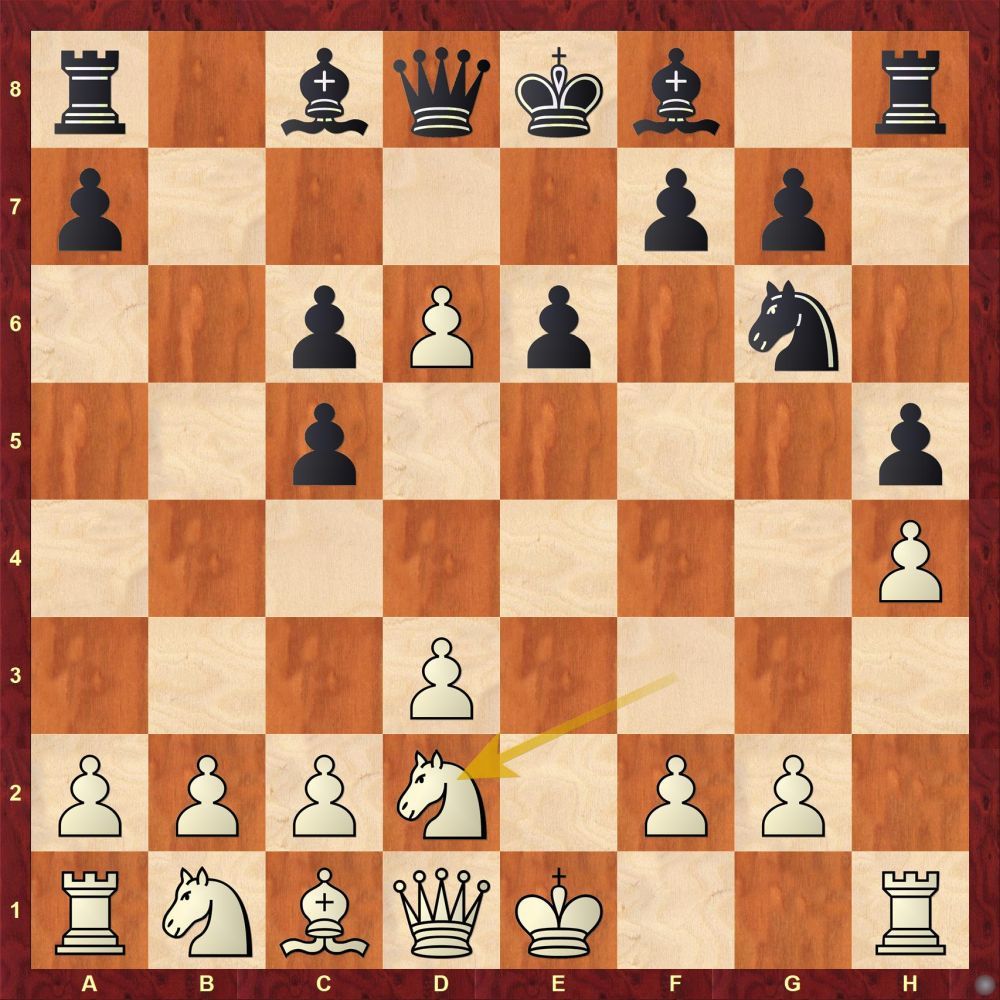 9.Nfd2 was a strange choice by Giri

This defies conventional thinking. Generally, when something is attacked, the pieces move towards the attacked point to defend. Here a Knight is moving away from the defended h4 pawn.

But the point is not just this Knight moves away in pursuit of god knows what, but it also takes away the movement of another piece. Perhaps, Giri was devising a plan of attack on c6 point - but why now, that pawn is a permanent liability and as long as it is there, Black's light squared Bishop's mobility is curtailed.

Well, a top master like Giri of course knows all these simple principles and also knows that in Chess one has to disobey principles time and again in order to score wins. Finding 'faults' on hindsight is the most easiest thing. But even on taking into account the above factor, it is hard to buy-in White's intentions. Back to business of "attacking" the h4 pawn or merely preserving it, so that Black need not worry about the c5 weakness! 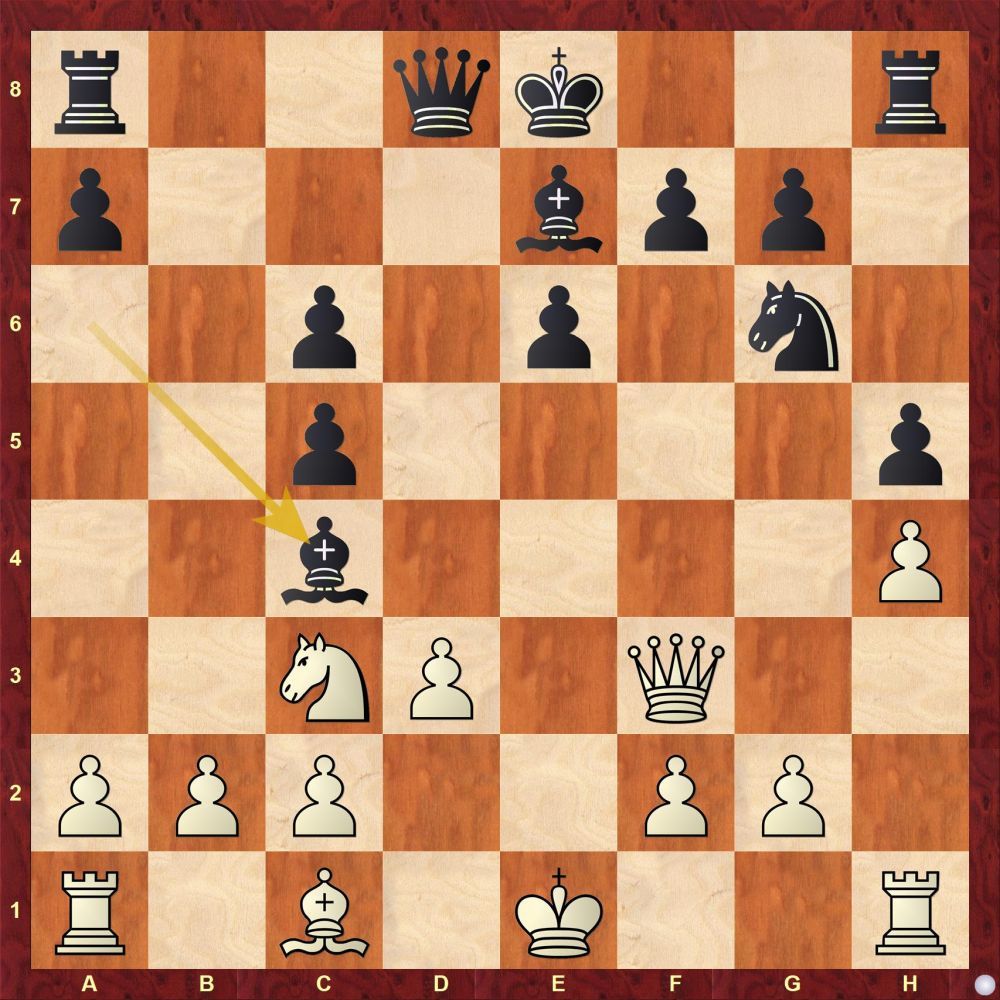 "One of the most important exigencies in the conduct of the game is the exercise of the most critical judgment in estimating the relative value of the pawns and pieces which must be strongly taken into consideration in effecting exchanges..." said Steinitz. This is one defining aspect of great players. They uncannily know when to exchange what and when to refrain.

There are no hard and fast rules in this aspect. It varies from position to position and from the type of response players are expected to make their proclivities fears! Human mind is the most intriguing component which is not so widely apprehended during the game of chess. The transition from opening to middlegame is like having a labour pain, one would seldom know how the birth of the middlegame will look like and what prospects the child thus born will have in future! At best one gets some inkling, but nothing beyond.

The White Knight in contention took a long tour from g1-c4 and gets chopped off by a piece which moved twice and which in any case does not look like a formidable one being hemmed by its own pawn on c6 and e6. 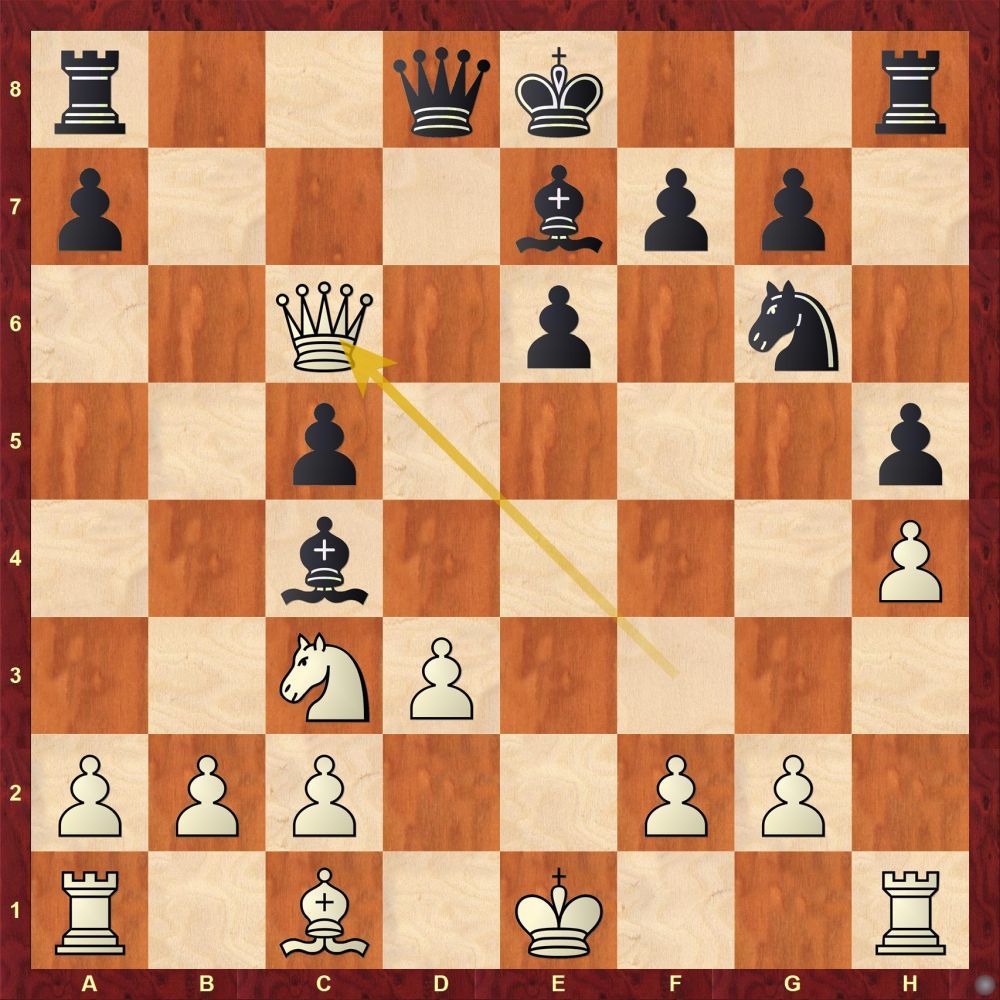 Is it worth taking this pawn!? One cannot argue surely for both "for" & "against" it, at this juncture.

Chess is a bundle of mystery and confusion with a few moment where one gets a glimpse of beauty and a bit of clarity and 'certainty'. But on most occasions, both the players and the commentators grope in darkness!

Richard Feynman, further said (from the quote given at the top), "...I have different degrees of certainty about different things, but I'm not absolutely sure of anything and there are many things I don't know anything about. I might think about it a little bit and if I can't figure it out, then I go on to something else, but I don't have to know an answer. I don't feel frightened by not knowing things..." 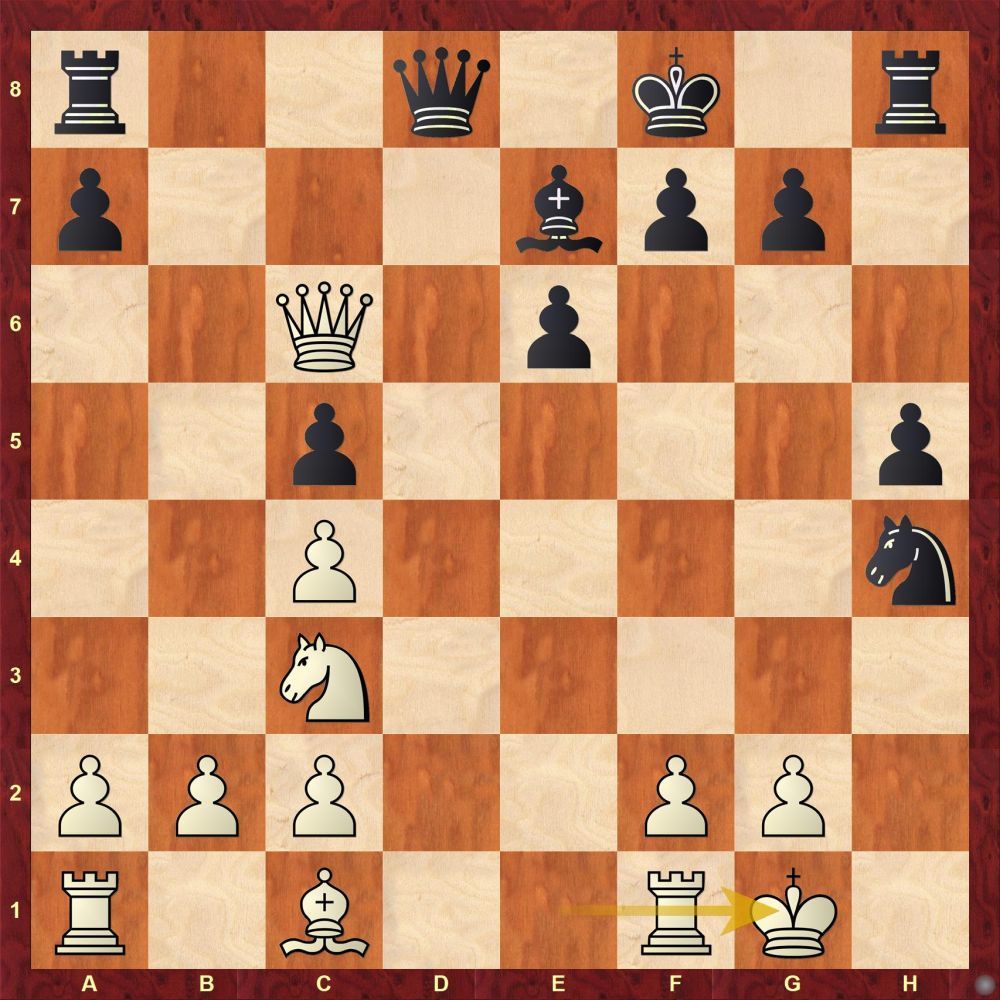 Yes, Steinitz also said that the King is a strong piece and it can defend itself well on most occasions. But when you look at both the Kings, it is easy to say that Black King is more safe, not because it has pieces around, but because White has no intention to attack it!

Will White King find the Queenside a safe haven!? Difficult to say assertively. The issue is, human mind is not malleable and you cannot convince it to put the King on c1 with Black having the b-file open and has a Bishop which can exert pressure on b2 - the geometric meeting intersection of b-file and the long dark diagonal. Dubov possibly would have Castled long and may not even be worried about the pawn cover!

There is another factor which works in a chess game, again involving human mind (the culprit!). Players worry more about their opponent's prospect than the ones that they themselves have. And in the process, they diminish and the scope of their own pieces and tend to under-utilise them and reduce them to puppets. This is the indemnity great players like Carlsen enjoy over others - others tend to believe Carlsen's more than believing themselves.

Back to its place after paving way for the h-pawn to move forward! As simple as that! 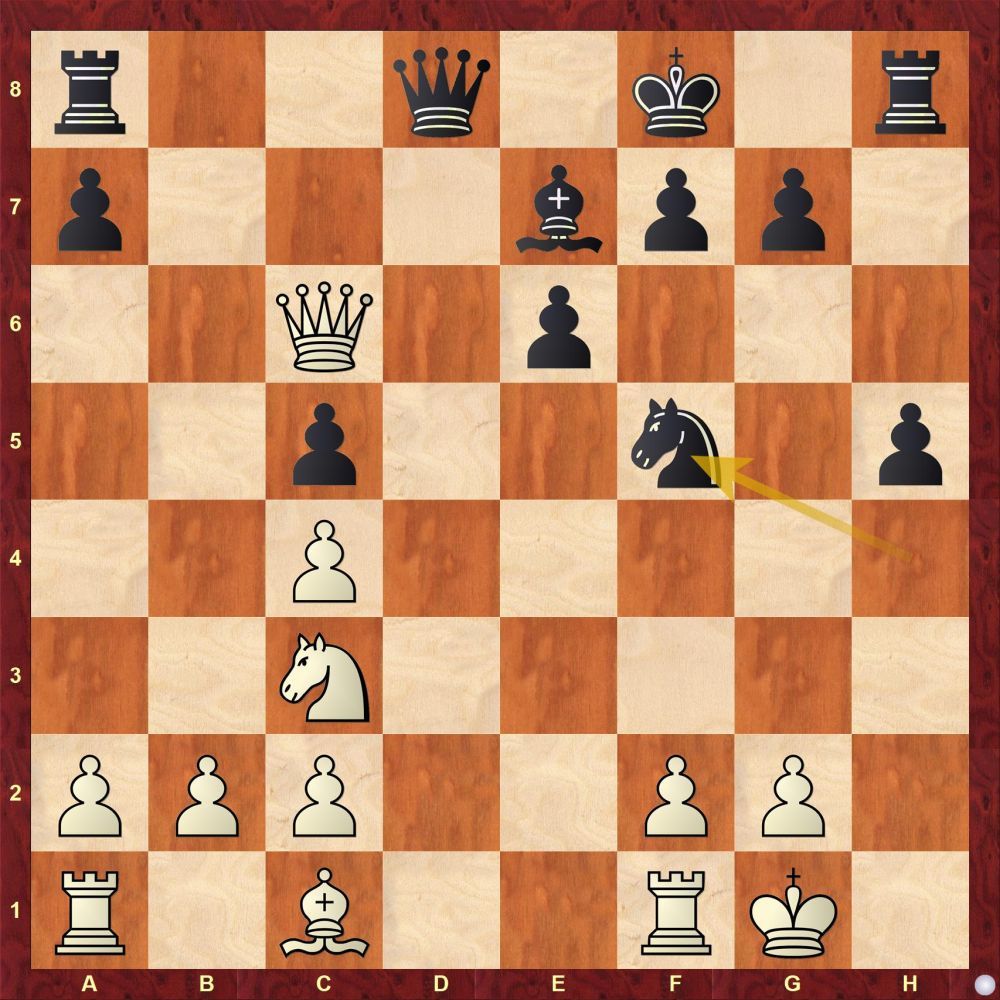 15...Nf5 was a much needed backward move 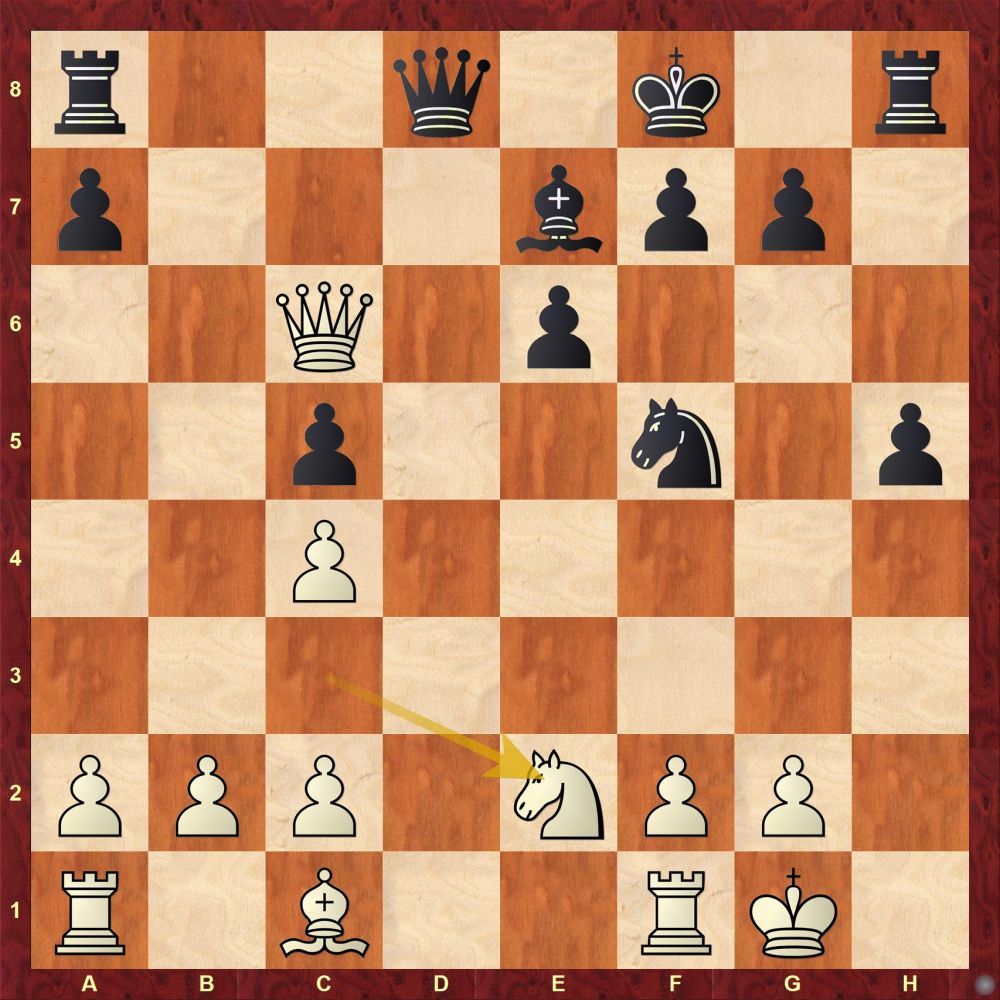 Another move which is hard to understand (while sitting in the drawing room with a cup of coffee in hand of course!). On hindsight, it may have been better to pull the Queen to f3 or perhaps e4 followed by Bf4 and bring the Rook to d-file trying to centralise the pieces and retain the Queen on the long light diagonal, as far as possible. 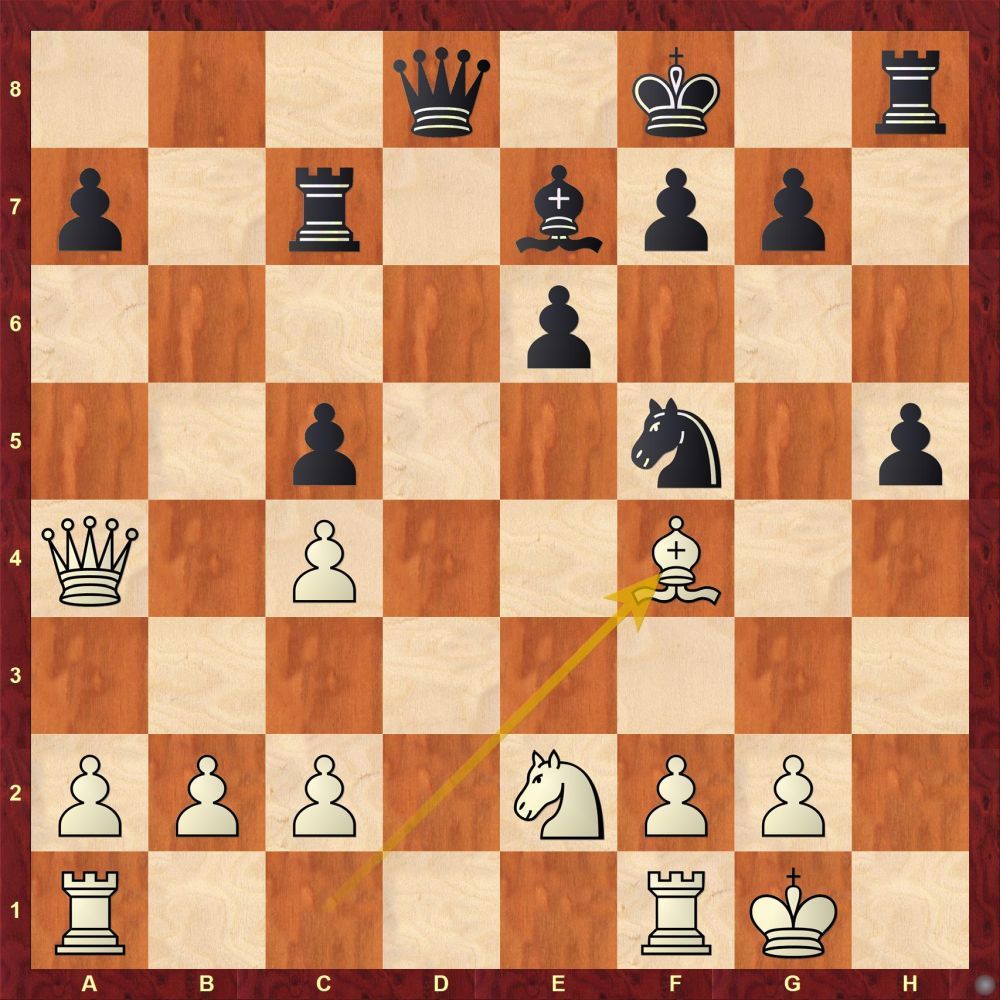 Trifle late! Had the Queen been on e4 and the Bishop already on f4, White may not be worse at least.

The game abruptly ends here, at the stroke of the little pawn coming in confrontation with the enemy fortress for the first time in the game! The light squares around the King are badly compromised and it was enough for White to pull the curtains and not let the world know how it will be teared apart! 0-1

The final position is defining! 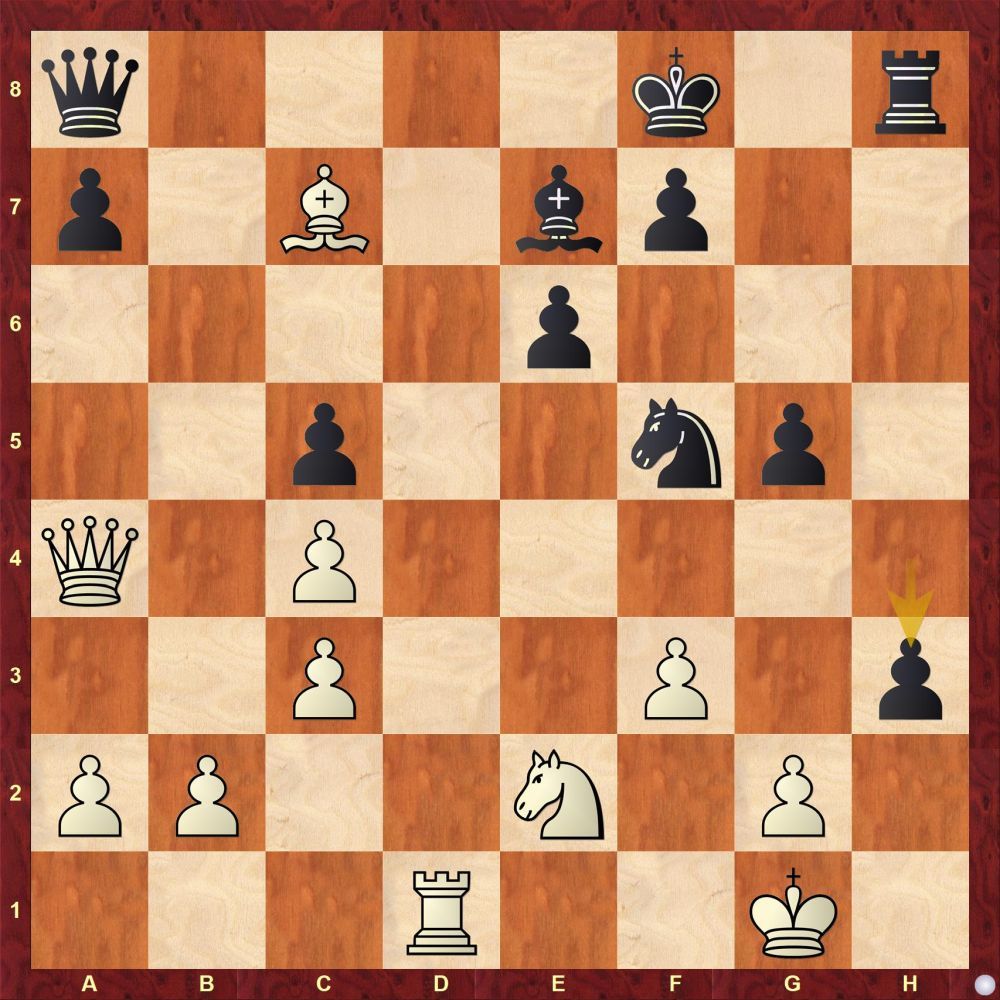 ...And the game got over

All White pieces remain as mere spectators. Paradoxically, the two major pieces of Black - the Queen on a8 and the unmoved Rook on h8 are stationed at the farthest post from the White King but enough to spell doom!

There is absolute economy of forces deployed by the attacking side. Morphy would have been proud by the precision and simplicity of execution of course aided by White.

The light squares have been totally conceded to Black because of one moment of lack of awareness by a top class GM - they too are susceptible. The position would not have deteriorated if the White Queen was placed on that diagonal.

Yes, Black would pose different problems in a different area, and White in turn could have posed some problems too and that is the way a Chess game goes.

Srikanth Govind is a native of Chennai, with Tamil as his mother tongue and English as his favourite language of expression. He works with strong grandmasters like Sundararajan Kidambi, Vishnu Prasanna and helps them uncover their full chess potential. A keen reader of varied subjects as philosophy, science, literature, neurology and Hindu spiritualism, Srikanth – Sri to his friends – is a connoisseur of Karnataka Sangita or Indian Carnatic music, one of the richest and most ancient classic music forms in the world. You can contact Srikanth on his mail id.