World Rapid Championship: Anand closes in on the tournament leaders going into the final day

After ten rounds, the open segment of the King Salman World Rapid Championship remains wide open with seven players leading the pack at 7.5/10. If that wasn't enough, ten others -- with the defending champion, Vishy Anand among them -- are breathing down their necks at 7.0/10. Anand had kicked off well but stumbled in round eight as he lost to GM Ivan Saric. Regardless, he pulled off two more wins to compensate for it and reached within striking distance of the tournament leaders. Ju Wenjun continued her dominion in the women's group and has moved a full point ahead of the field going into the final day. Meanwhile, Koneru Humpy remains India's best hope. Having scored 5.5/8, she is placed 14th on the leaderboard.

Five more rounds were played in the open segment of the World Rapid Championship in St. Petersburg, Russia on Thursday. At the conclusion of the tenth round, the number of leaders had grown to a whopping seven, all tied at 7½/10. The leaders include Ian Nepomniachtchi, Dmitry Andreikin, Wang Hao, Yu Yangyi, Vladislav Artemiev, Daniil Dubov and Maxim Matlakov.

For Magnus Carlsen, the day turned out to be a lot better than the opening day as he raked four points out of his five games. Defending champion, Viswanathan Anand, scored a half point lesser than Carlsen as both players finished in a ten-way tie for second place at the conclusion of day two at 7.0/9.

Anand began the day strongly scoring a spectacular win over Russian IM Semen Khanin. As black, Anand lunged his pawns forward very early in an Italian Opening to generate a monstrous attack on the enemy king. Khanin did not react in the best manner and saw his position get annihilated within 31 moves.

The Indian ace had a couple of tough games post this victory. He had found himself in a difficult position against the Iranian talent, Alireza Firouzja, from the white side of a Sicilian Richter-Rauzer. However, Anand managed to liquidate in time and secured a draw after a long fighting endgame. 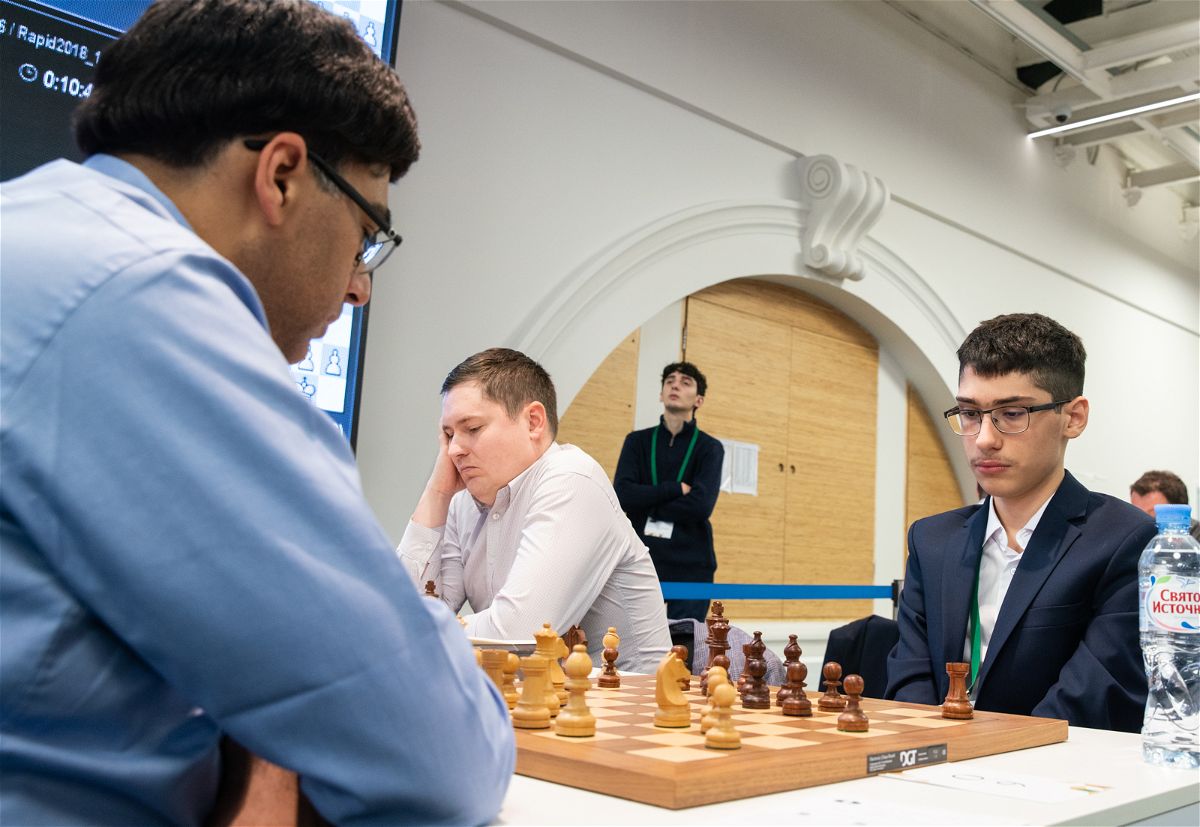 Alireza Firouzja had Anand on tightropes out of a Sicilian Richter-Rauzer | Photo: Maria Emelianova

In round 8, Anand suffered his first loss of the tournament to Croatian GM Ivan Saric. The game had remained fairly balanced for the most part but Saric managed to generate some initiative on the black king. A time scramble soon ensued; errors were made from both sides but Saric managed to come out on top in the end. Anand made a strong comeback in his last two games, however, scoring back to back wins to take the joint second place. 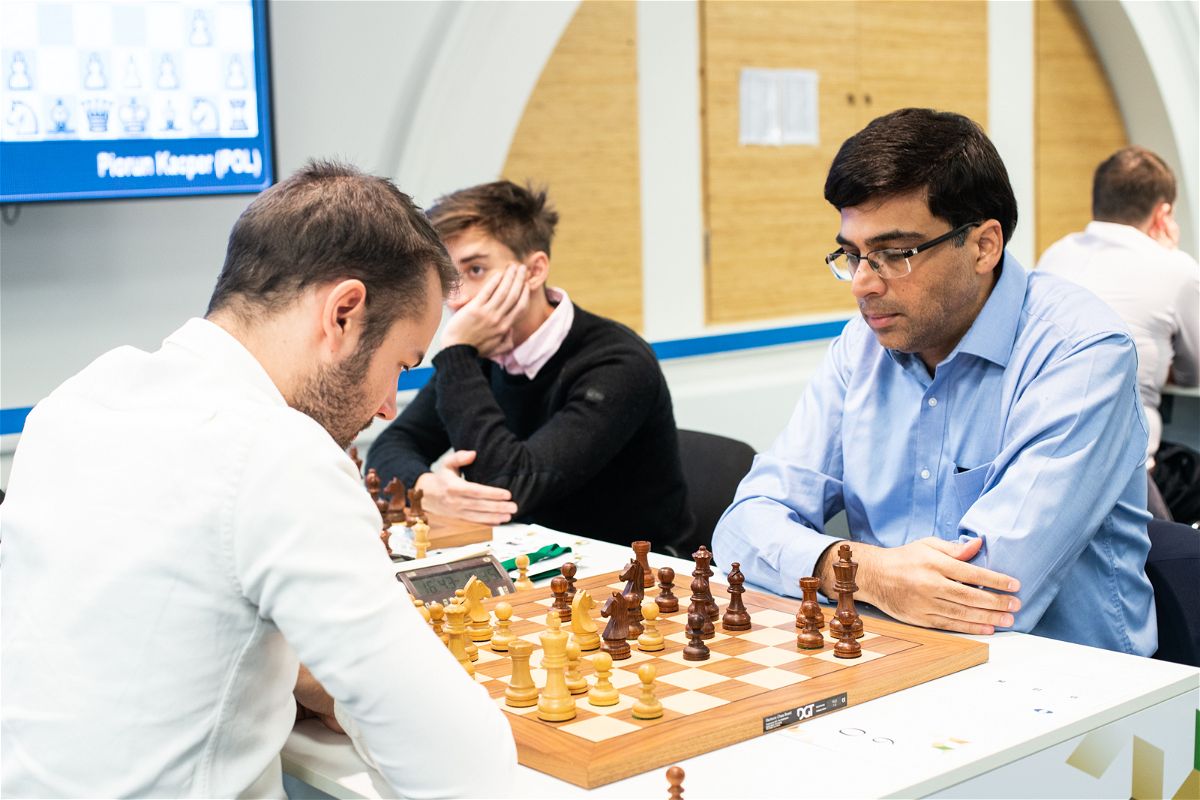 Anand lost his first game of the event to Ivan Saric in round 8 | Photo: Maria Emelianova

Like Anand, Carlsen had also kicked off with a brilliant win in the opening round of the day. Against Ivan Salgado Lopez of Spain, the reigning classical and blitz world champion produced a positional masterpiece with the white pieces in an English Opening.

In an interview immediately after the game, Carlsen said that he was feeling optimistic about his chances: “I felt that the first game today was very important to set the mood. Obviously, yesterday was very bad but I am still in it and I am starting to find my ground.”

This dominating win had clearly boosted Carlsen’s confidence – perhaps, too much for his own good. In the very next round, Carlsen suffered yet another defeat. Playing against GM Alexander Zubov, Carlsen over-pressed in an equal position and went on to lose very soon in the endgame. However, Carlsen won all of his remaining three games to come back to the top towards the end of the day. 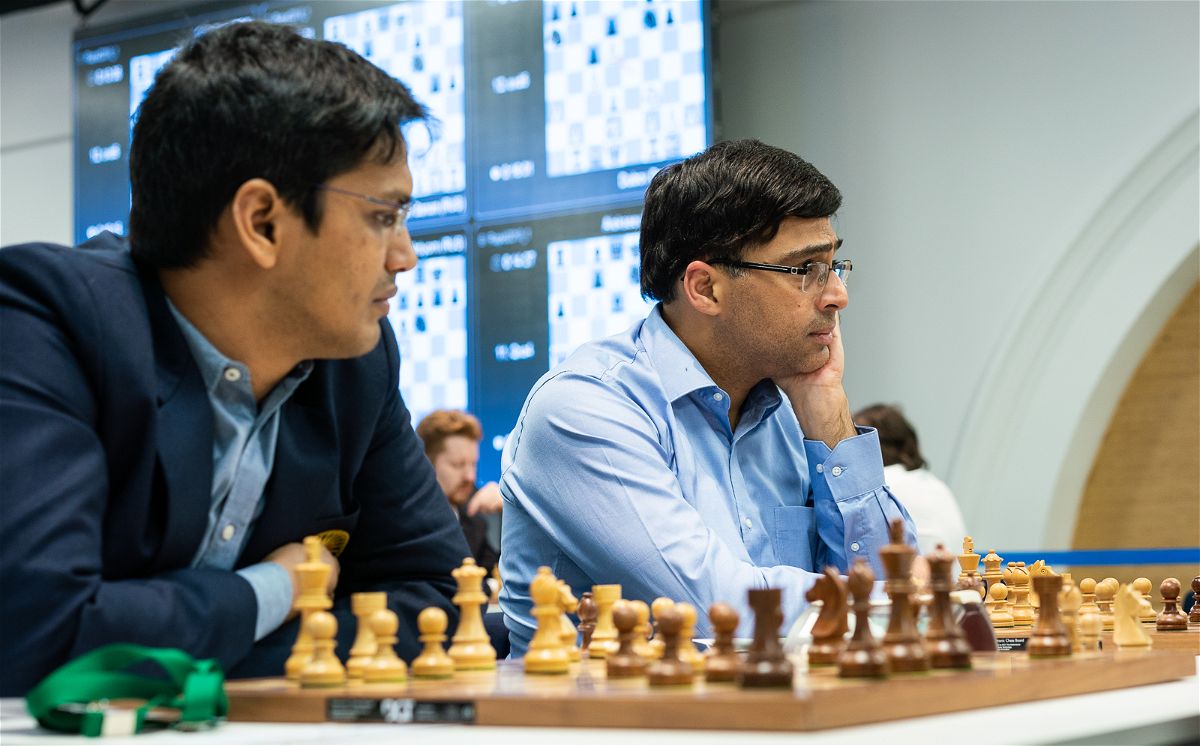 GM Pentala Harikrishna is only half a point behind Anand at 6.5/10 | Photo: Lennart Ootes

GM Pentala Harikrishna is another Indian player to watch out for in the tournament. Thus far, the grandmaster from Guntur has scored four wins and five draws to reach 6½/10 and is in the joint third place. After beginning the second day with a loss, Hari went on to score two draws and two wins. Especially noteworthy was his ninth round win over GM Andrey Esipenko where he dominated throughout with the white pieces.

GM Vishnu Prasanna, after scoring a dismal ½/5 on the opening day, came back with a bang, winning all of his games on day two. In his last two games, he scored wins over strong grandmasters like Ivan Salgado Lopez and Zhamsaran Tsydypov. 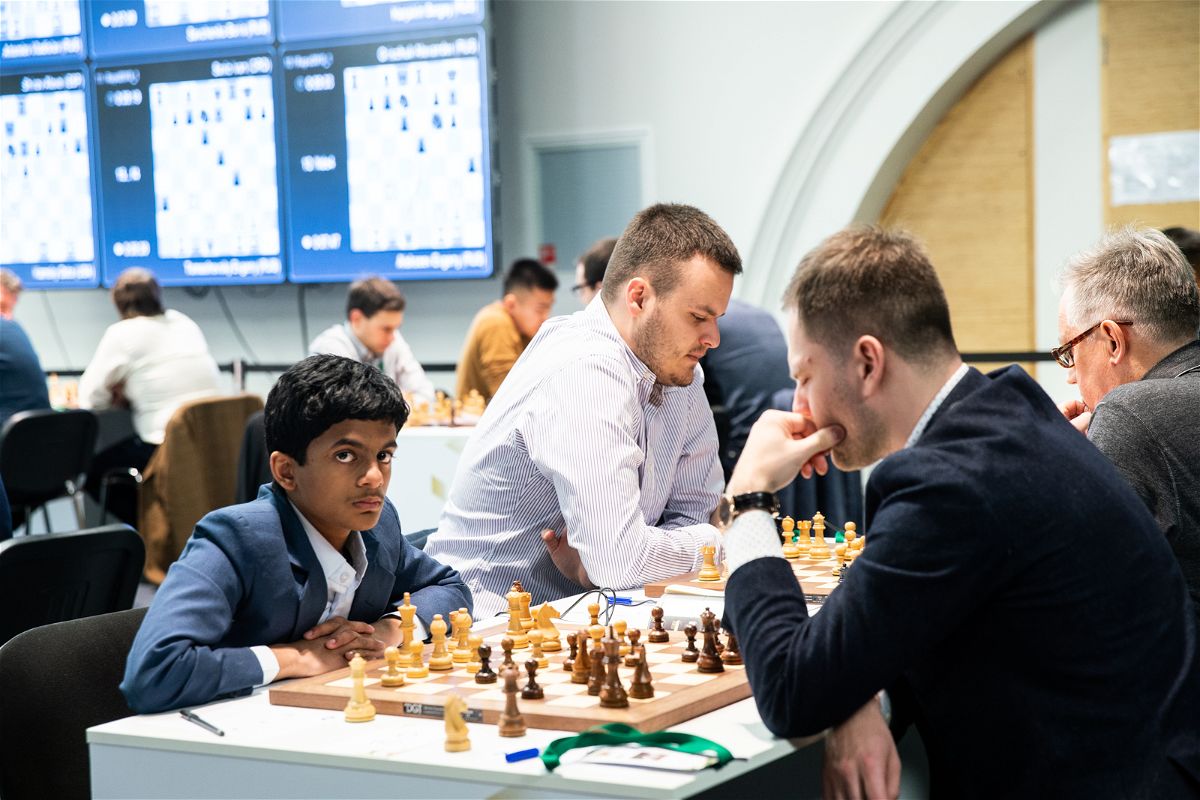 Nihal Sarin had a turbulent second day. He finished with three wins and two losses bringing his score up to 5.0/10 | Photo: Maria Emelianova 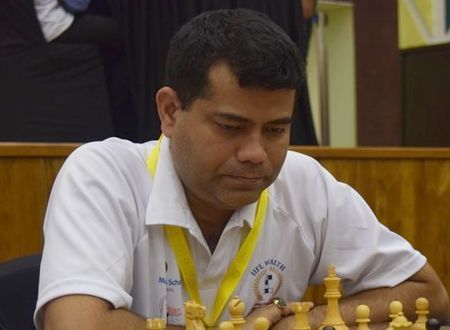 IM Dinesh Sharma, rated 2388, is having his own party in St Petersburg, having played with a rating performance of 2607 in the first 10 rounds. Thus far, he has scored 5.0/10. On the first day, he managed to upset GM Francisco Vallejo Pons while remaining undefeated on day two against some very strong opposition.

In the women’s group, Ju Wenjun continued her stronghold over the field, increasing her lead to a full point at the conclusion of day two. In the opening round of the day, Ju brought down the top seed of the tournament, GM Anna Muzychuk from an equal looking rook endgame with the white pieces. In her remaining three games, she conceded two draws to Tan Zhongyi and Mariya Muzychuk before scoring her sixth win of the tournament over Zhao Xue. 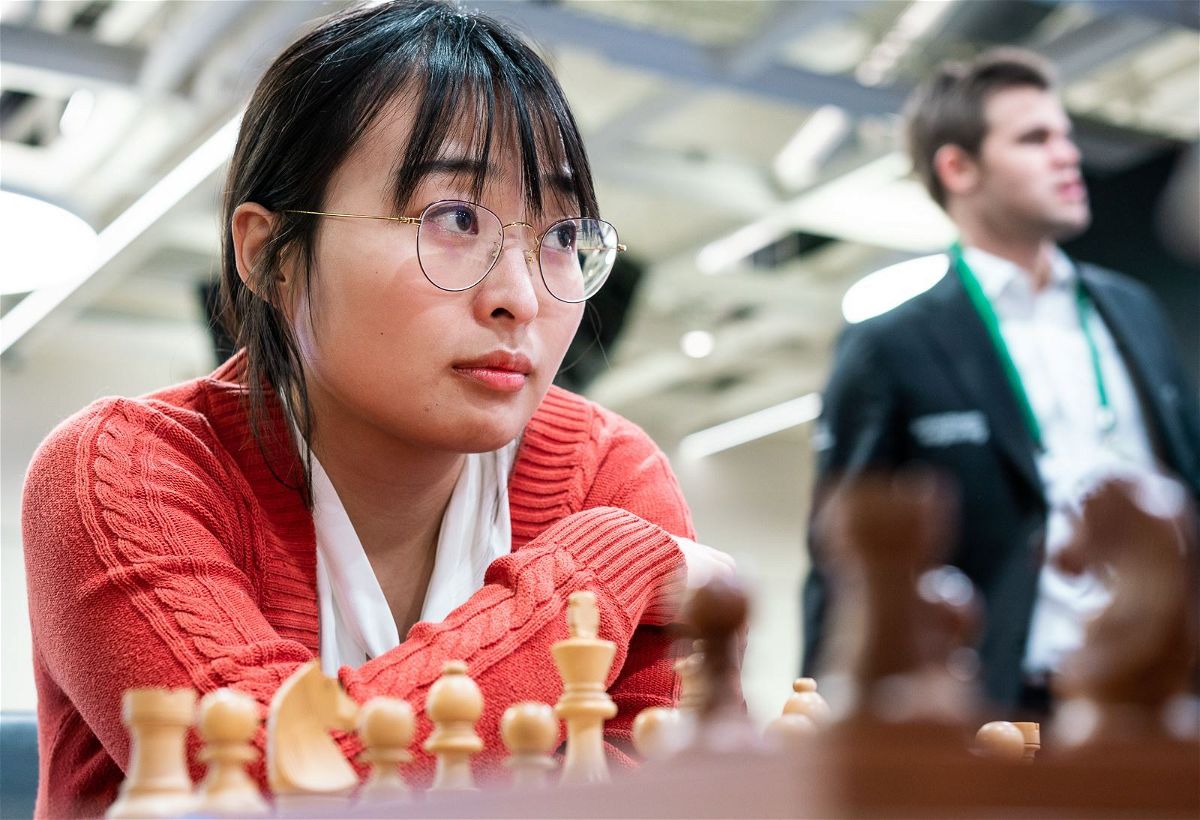 Koneru Humpy, in the meanwhile, finished with one win, two draws and a loss, scoring 2½ points out of her four games of the day. Currently, she is placed 14th on the leaderboard with a total score of 5½/8.

Harika Dronavalli overcame the early setbacks she had suffered by scoring three straight wins on day two. In the final game of the day, she managed to hold Elena Tomilova to a draw in a worse minor piece endgame and finished day two without a loss. Still, with a score of 4½/8, she is placed 54th on the standings. 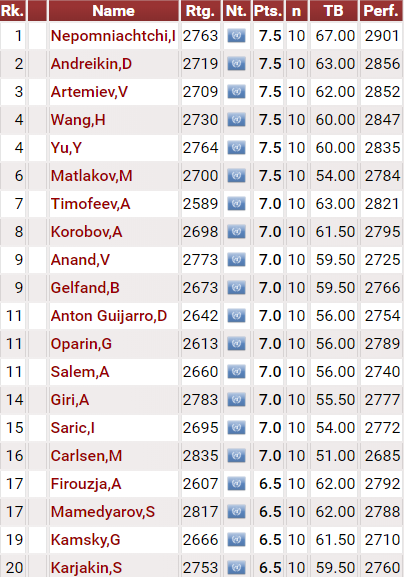 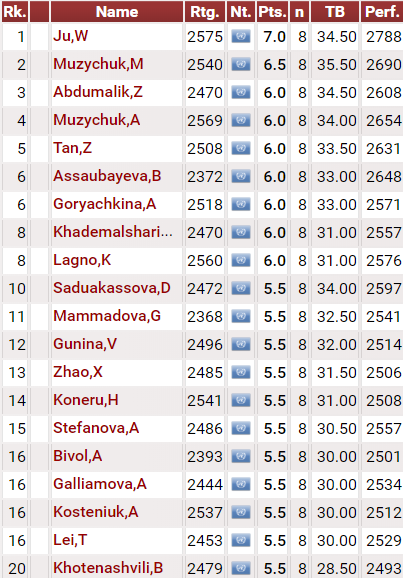