The state of Gujarat has always supported sports in a big way. In a new development, Sanskardham Sports Academy, a state of the art sporting complex will be launched on 8th of September 2019. Chess is one of the twelve sports that will be supported by the academy. GM Vishy Anand is invited as the guest of honour and on 7th of September he indulged in a very unique match-up. He played against twenty young talents of Gujarat chess where the youngsters could consult with each other before making their move. In this article we not only bring you the impressions from the event, but also show you the game which was quite intense and Anand had to use quite a bit of technique to bring home the full point! 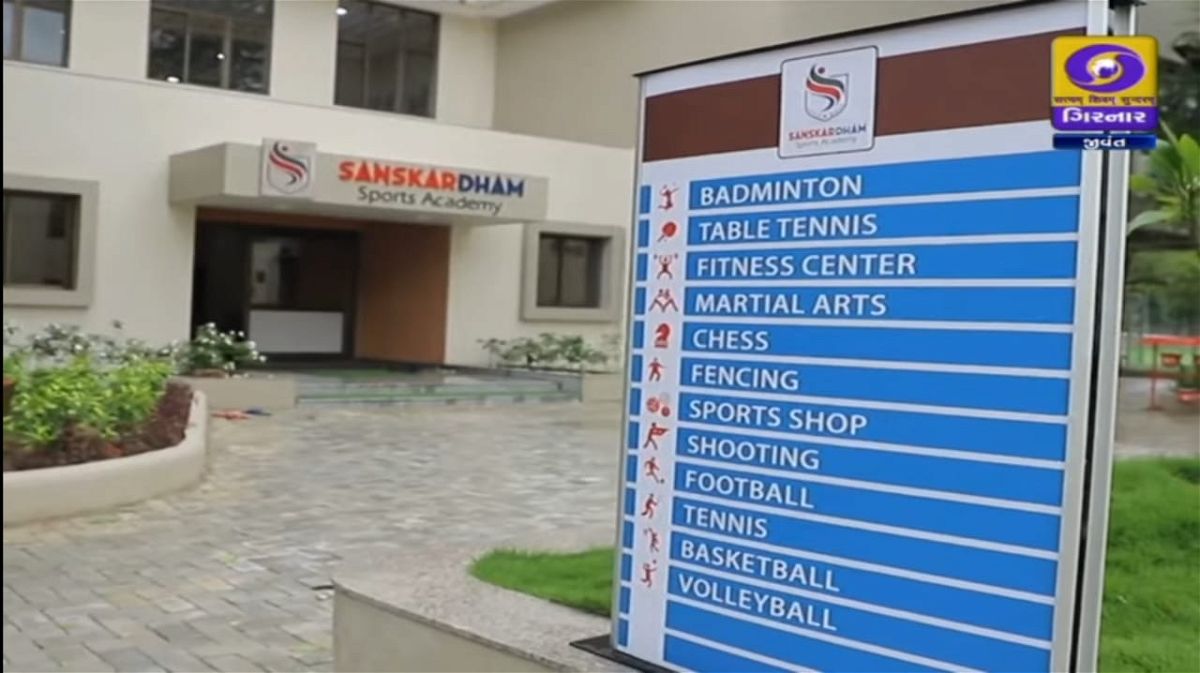 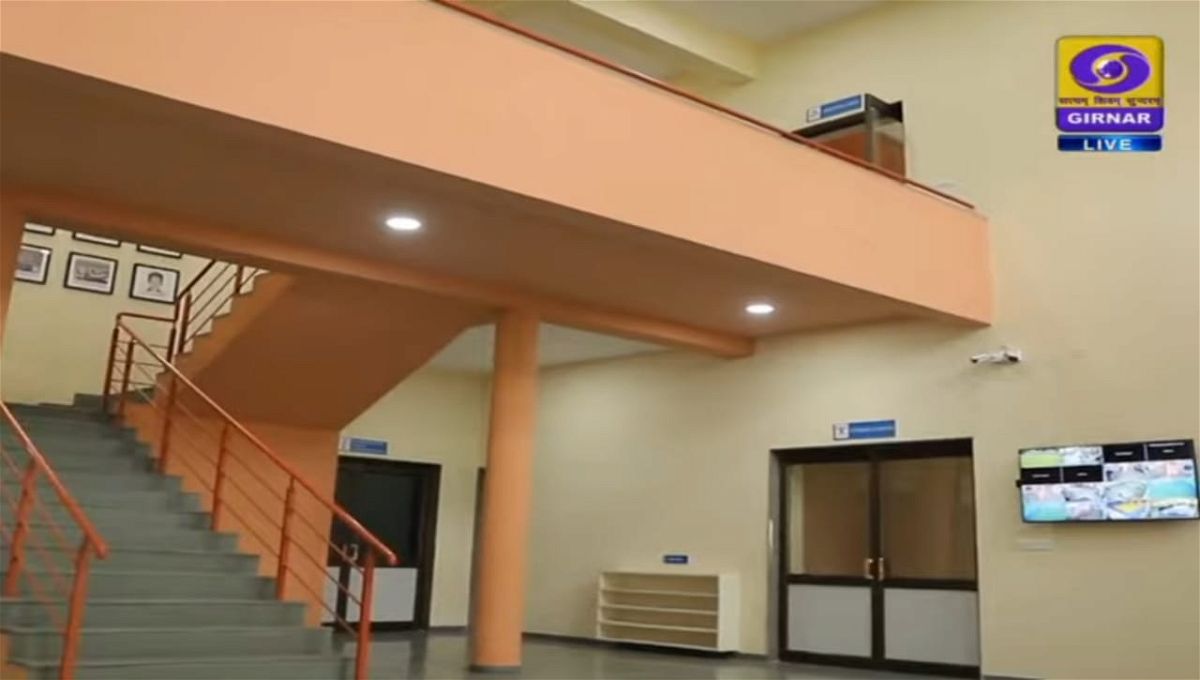 A small peak into how the building looks like | Photo: DD Girnar 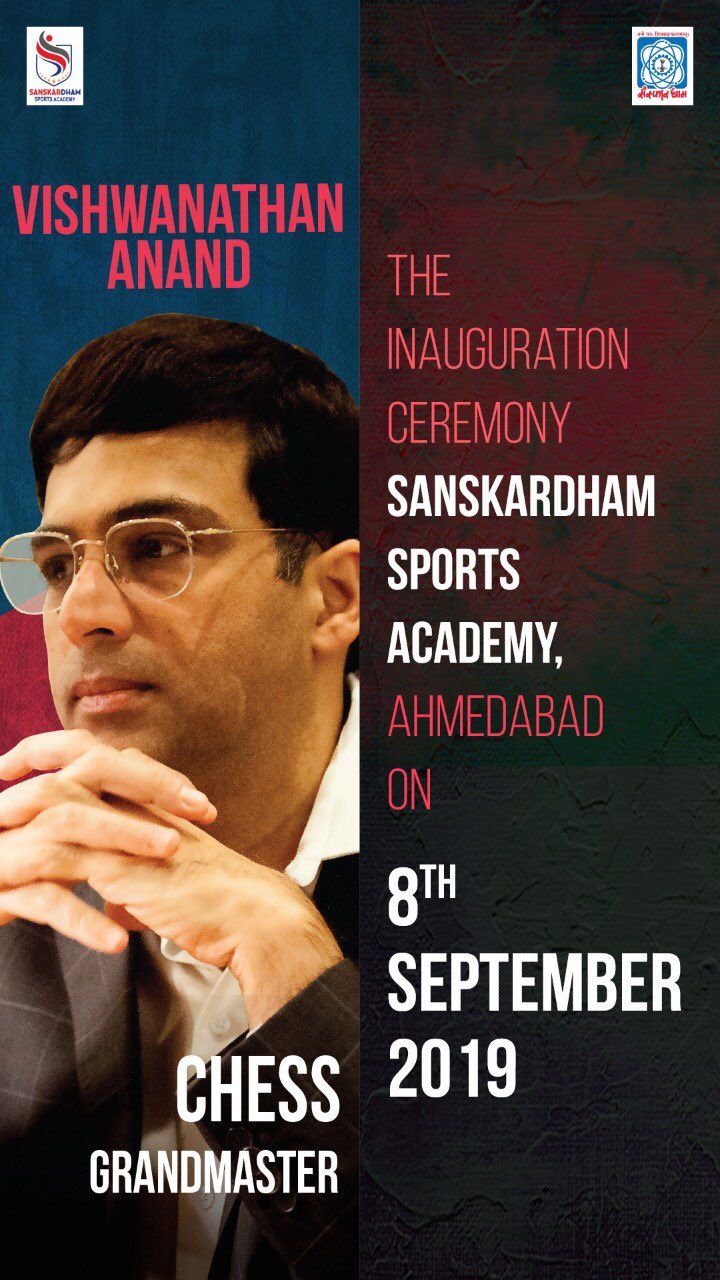 The inauguration ceremony of the academy will take place on 8th of September 2019. However, on 7th Anand indulged in a very interesting match! 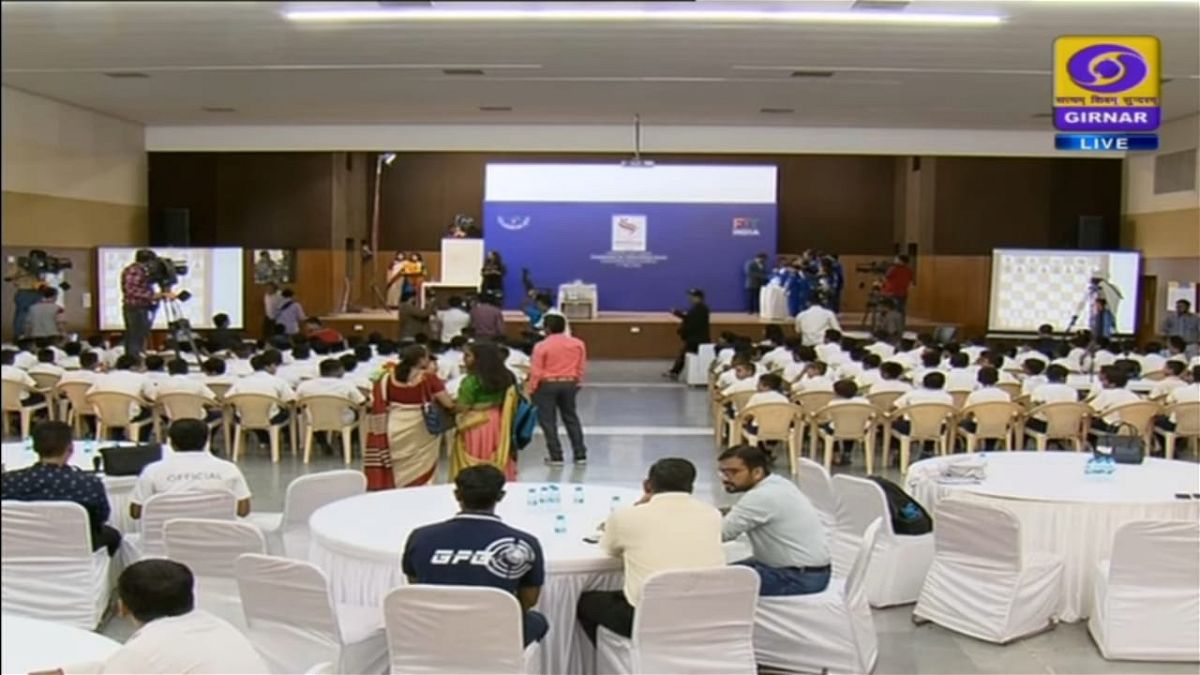 The setting of the entire show | Photo: DD Girnar 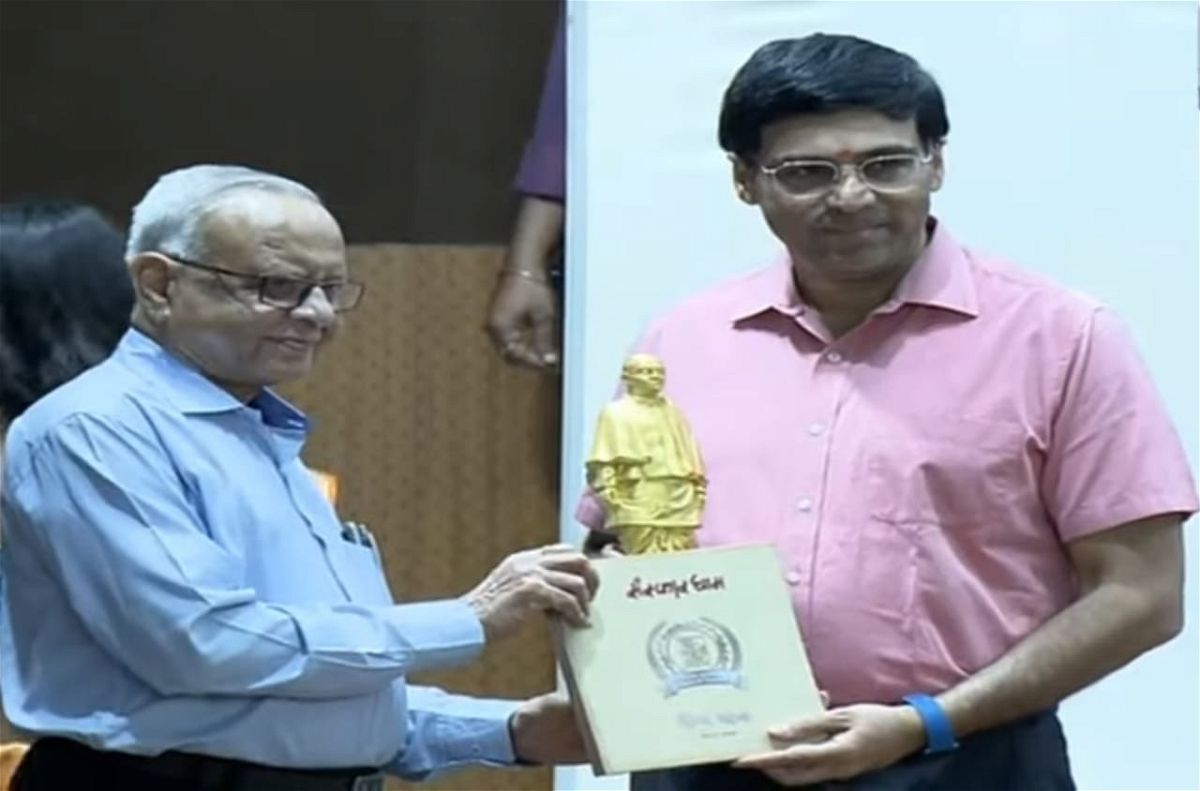 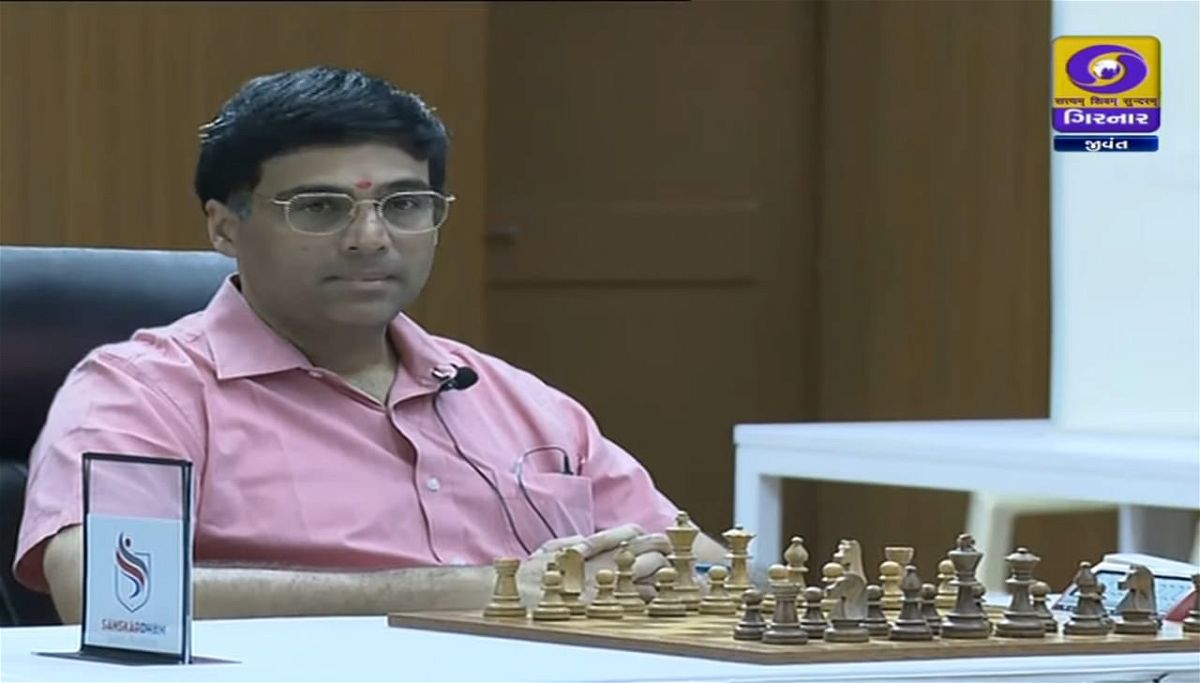 Soon it was business time as Vishy Anand sat on the chess board. But who was he up against? | Photo: DD Girnar 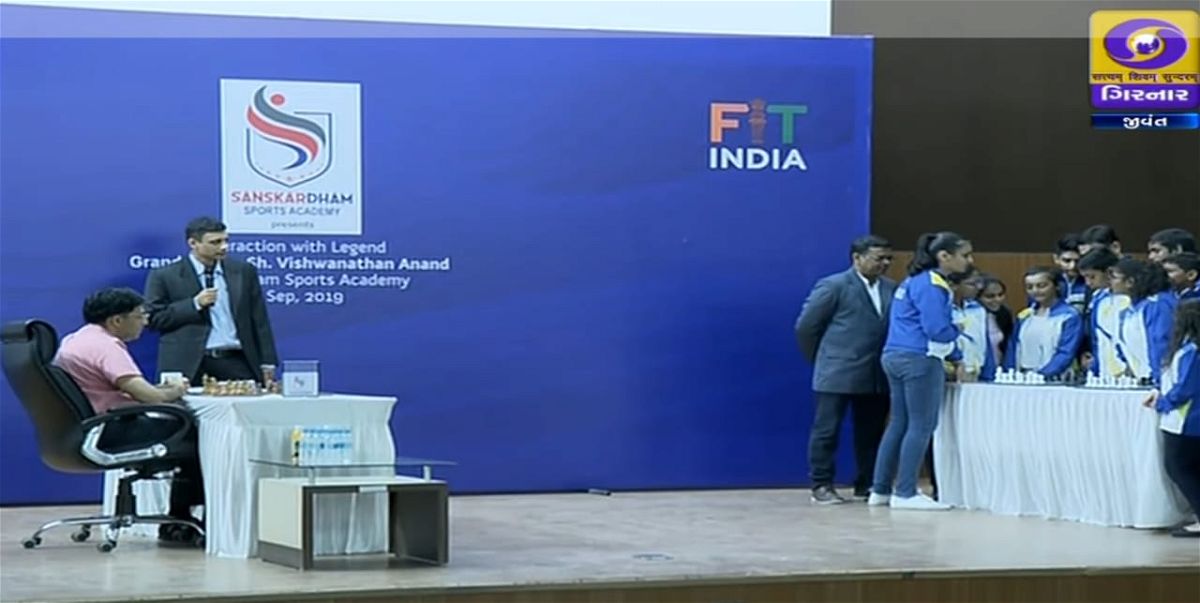 It was a game against 20 of Gujarat's brightest young talents. The youngsters would discuss among themselves and come up with a move. Vishy, on the other hand, was on his own! | Photo: DD Girnar

The players who were playing for Team Gujarat were: 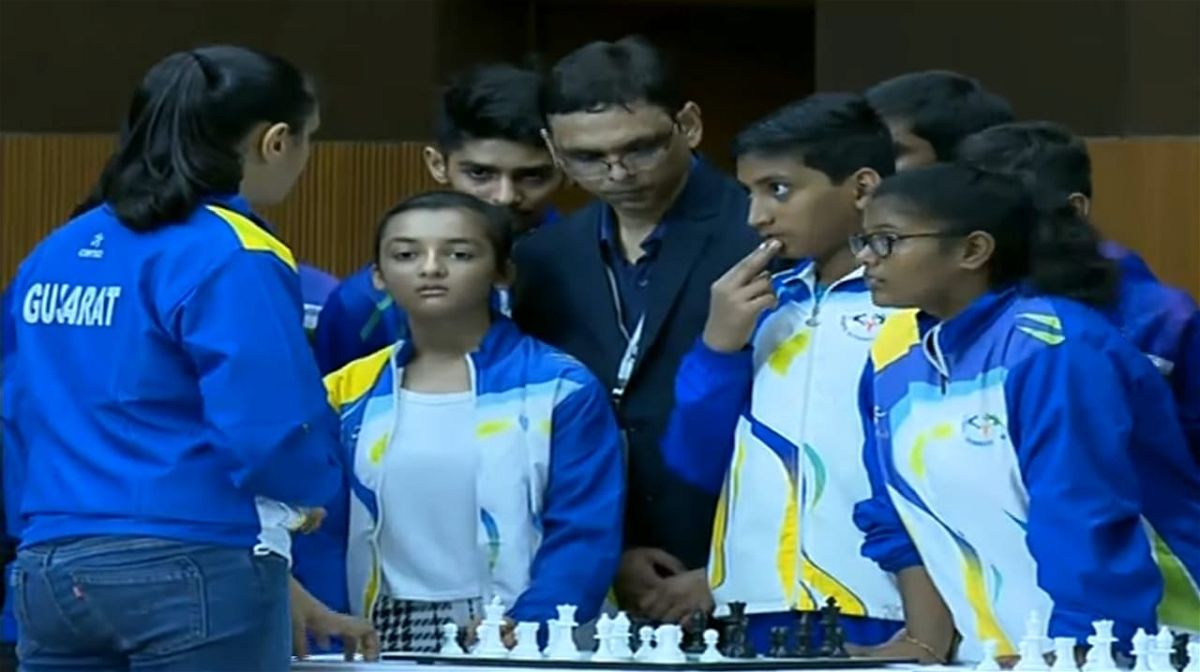 The team was joined by the well known trainer in Gujarat Joy Chauhan as they tried to pose maximum problems to Anand | Photo: DD Girnar 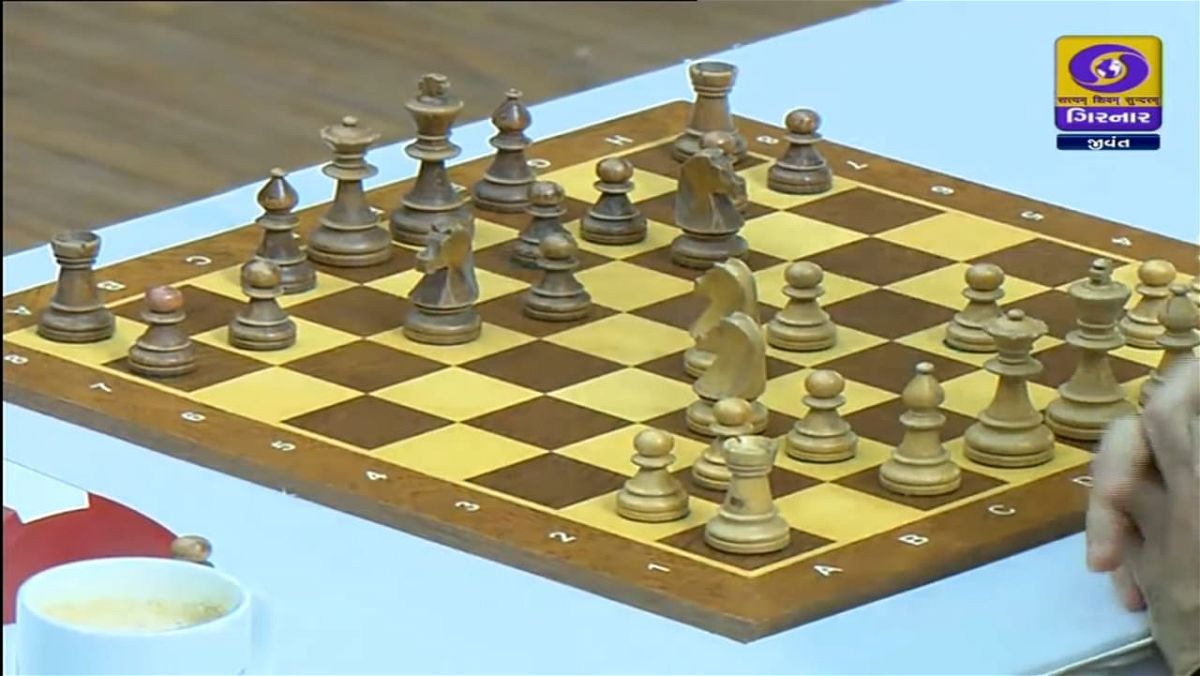 It was the Classical Sicilian, but instead of going for the usual 6.Bg5, Vishy played 6.f3 perhaps hoping for a Dragon! And he wasn't disappointed! | Photo: DD Girnar 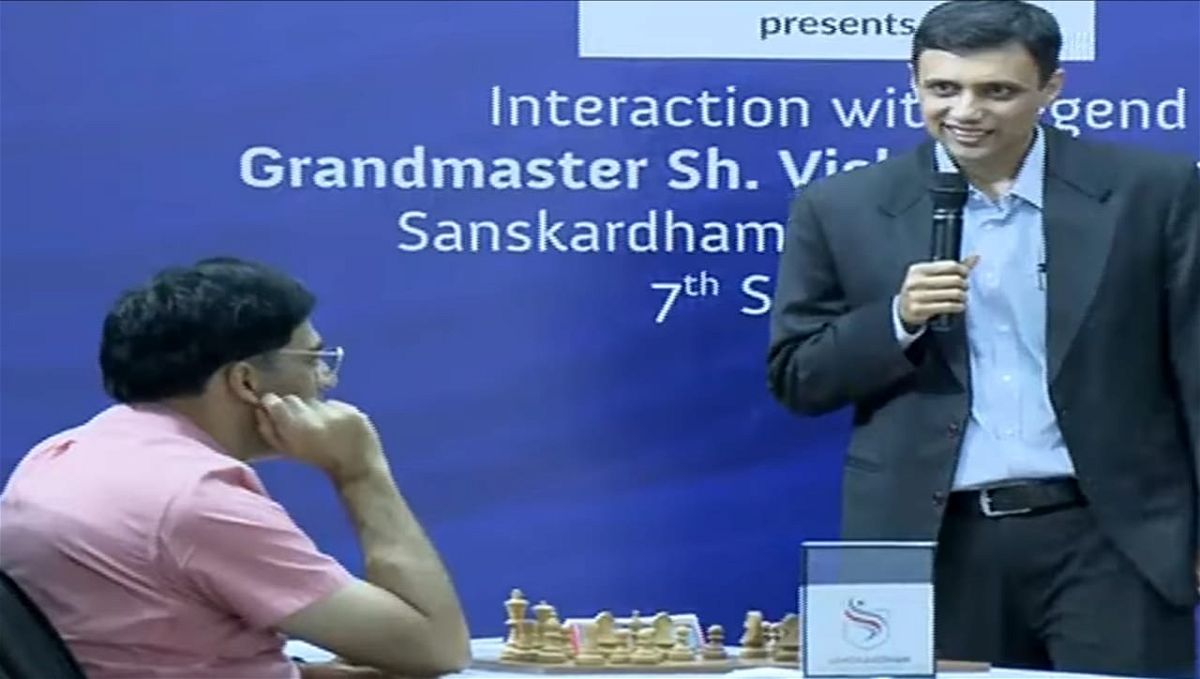 GM Tejas Bakre, the first GM of Gujarat, was the host of the ceremony and in between the moves he would try to pick Vishy's mind and also tell the viewers about what was going on in the game

Speaking to ChessBase India, GM Tejas Bakre said, "It was a unique and a very memorable experience to interact and spend time with Anand. To interact during an ongoing game was very interesting and his sense of humour and wit while playing made the event quite a fun one. Also Aruna and he remembered my meeting with them when I was a young kid in Moscow 1998 (17 years old) where he had won the chess Oscar and I was invited to his function as I had won the world youth Olympic gold then." 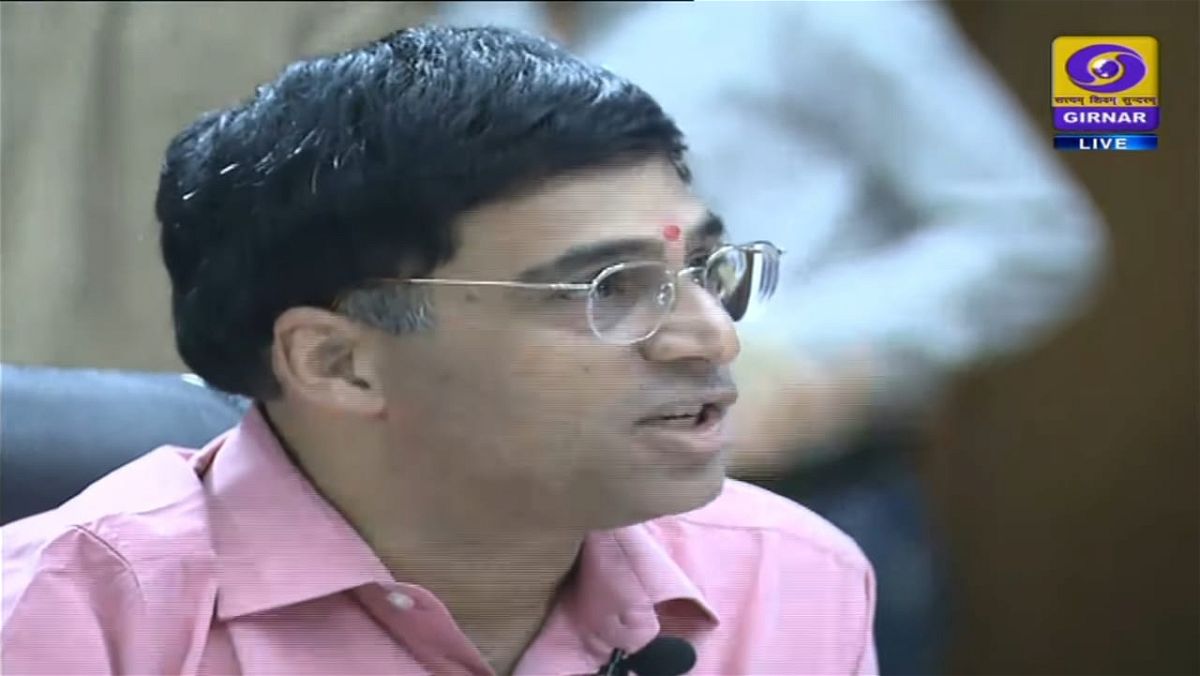 Vishy was quite relaxed during the game as he explained the various nuances and reasons for making his decisions | Photo: DD Girnar 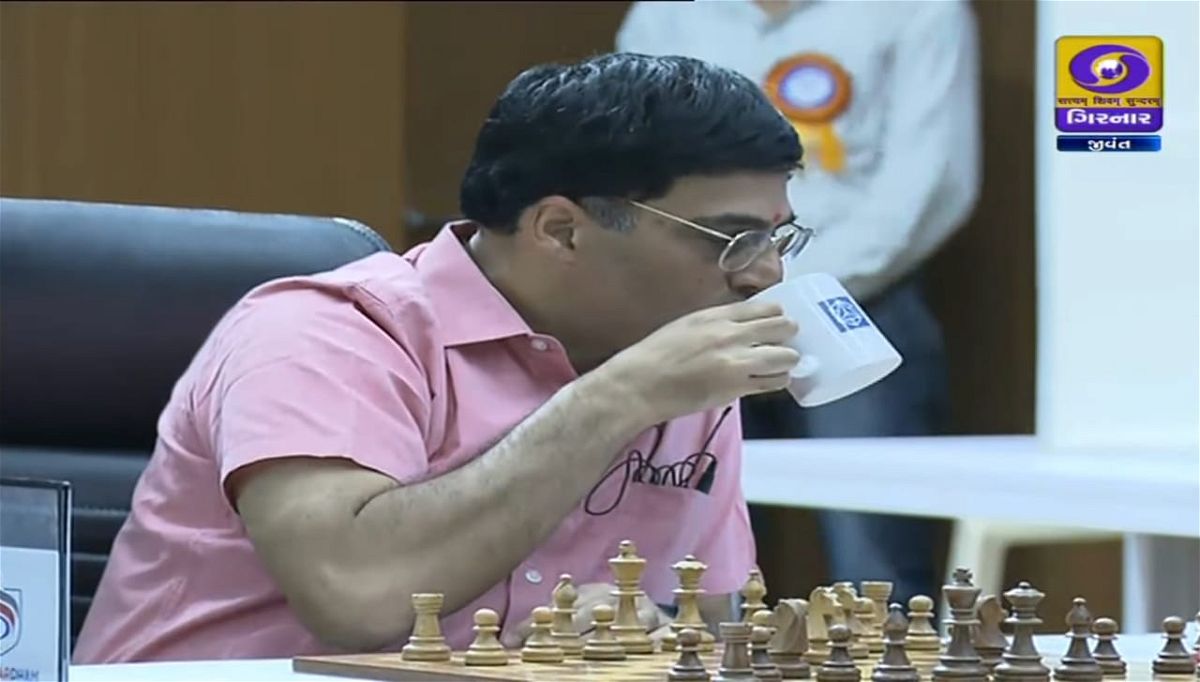 Vishy had 10 minutes for himself, while the Gujarat team had 20! | Photo: DD Girnar

At some point the position did get tense and Anand had to find a couple of accurate moves | Photo: DD Girnar

When time pressure arrived it was no longer possible to discuss the moves. So Dhyana Patel was one of the players who blitzed it out against Vishy. | Photo: DD Girnar

Vishwa Vasnawala was the other player who played for team Gujarat under time pressure. | Photo: DD Girnar

After 42 hard fought moves, the youngsters had to give in | Photo: DD Girnar

What a memorable experience for the entire group! | Photo: DD Girnar

After the game Anand and Aruna were interviewed by Juhi Bansal and some other journalists | Photo: DD Girnar

The time control of the game was Vishy Anand having 10 minutes, while the Gujarat youngsters had 20.

Vishy Anand vs 20 players from Gujarat 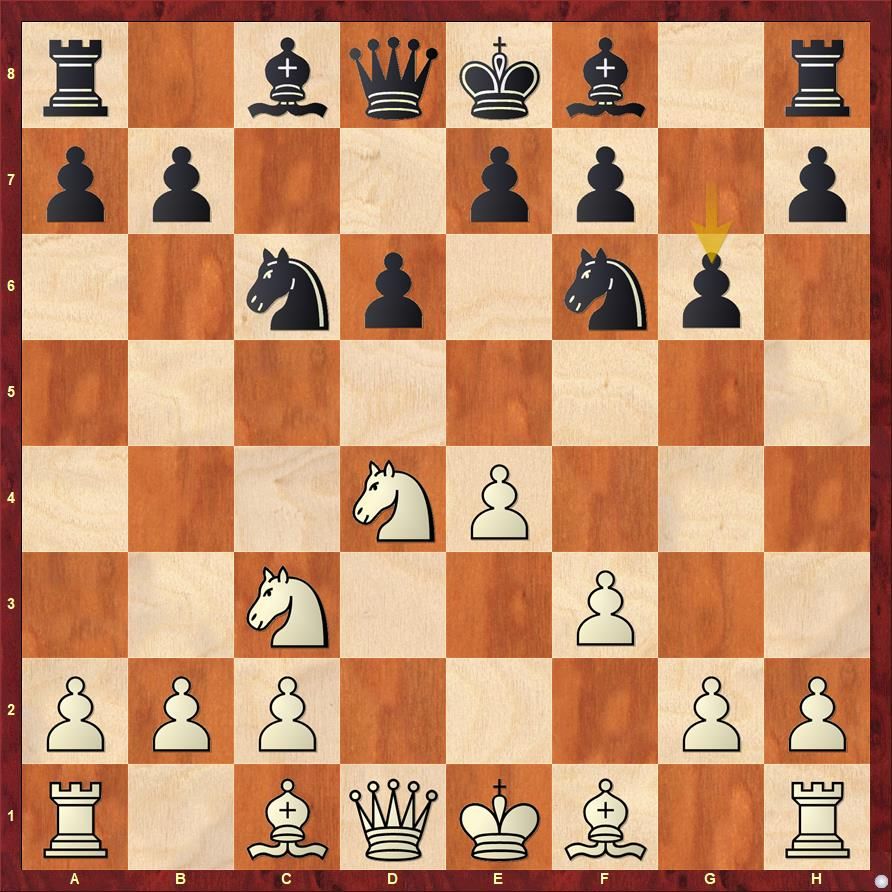 Vishy's opponents put their faith in the Dragon! 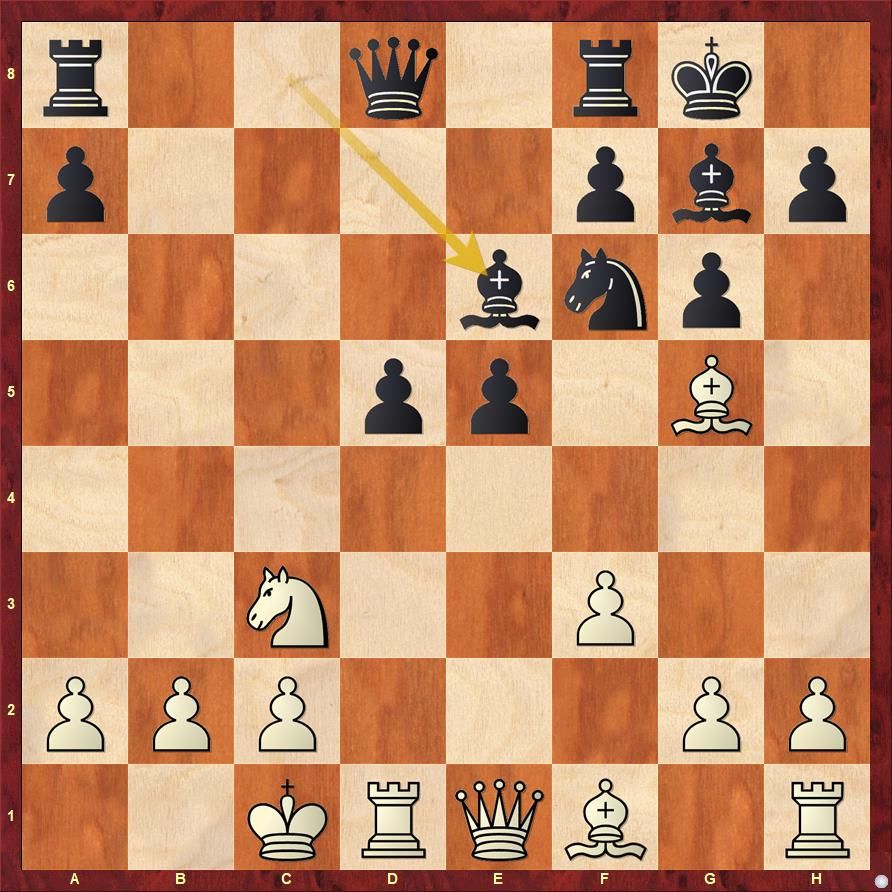 It's White to move here. What would you play?

There is only one way for White to get an advantage here and that is 14.Bc4! which Anand found without too many difficulties. 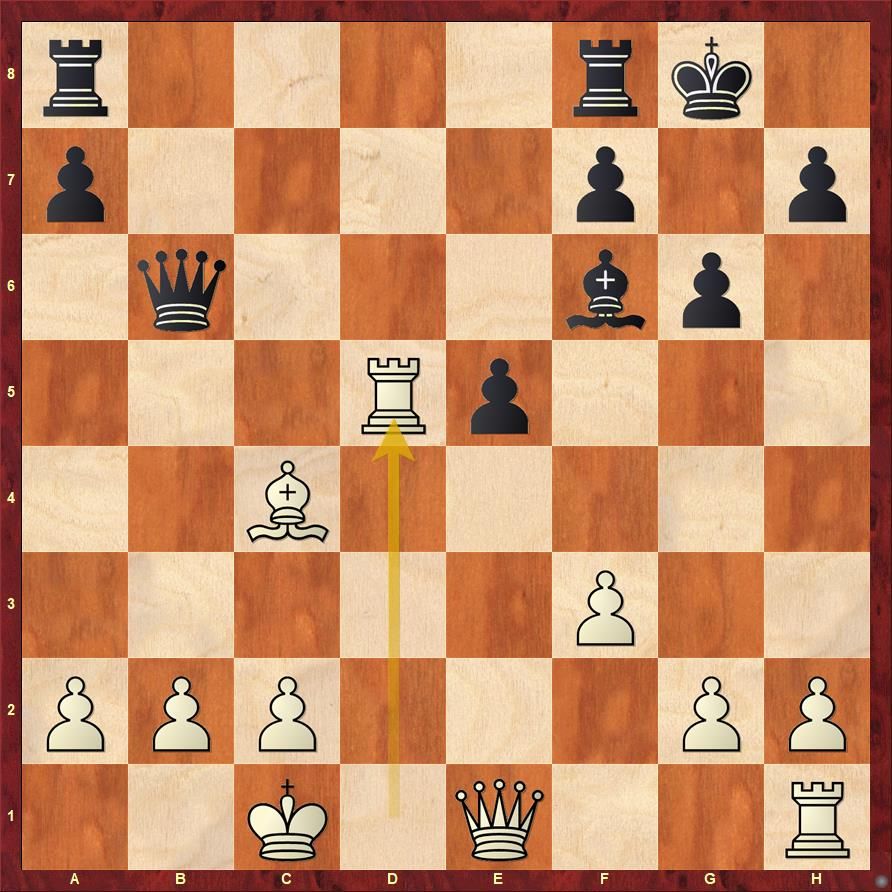 White is now a pawn up, but the open lines in front of the white king and also the opposite coloured bishops makes White technical task not at all easy. 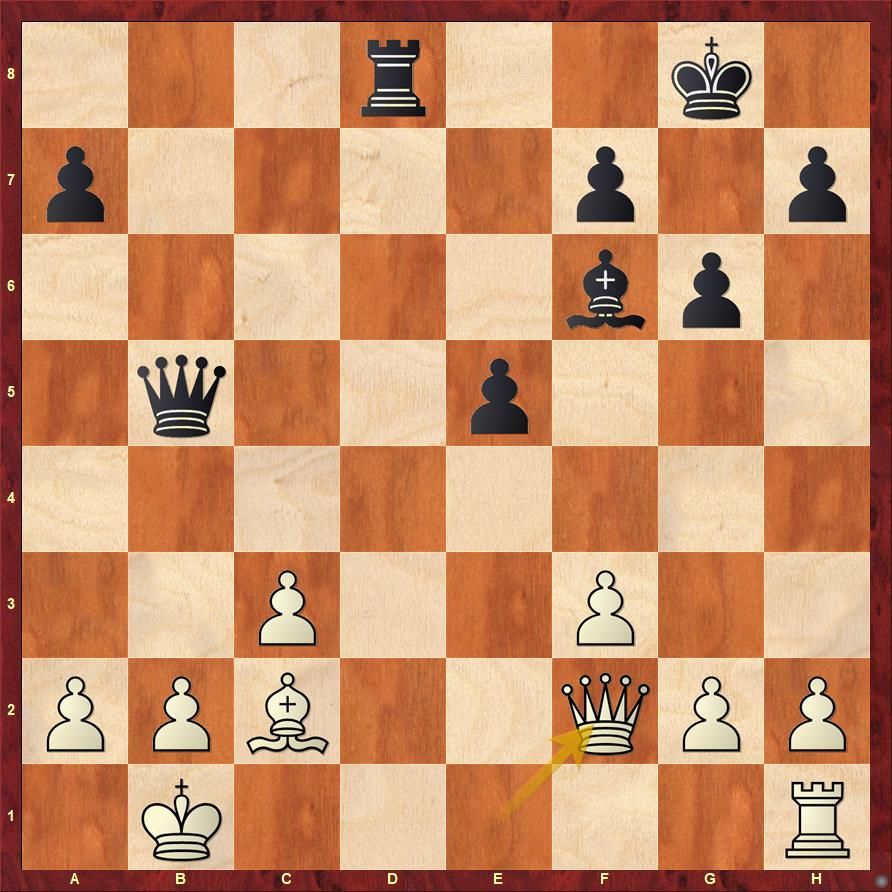 With subtle and patient moves like Qf2 Anand tried to keep control. It was important here for Black to break free with the move ...e4! It would have given the f6 bishop a new lease of life and made the game more complex. 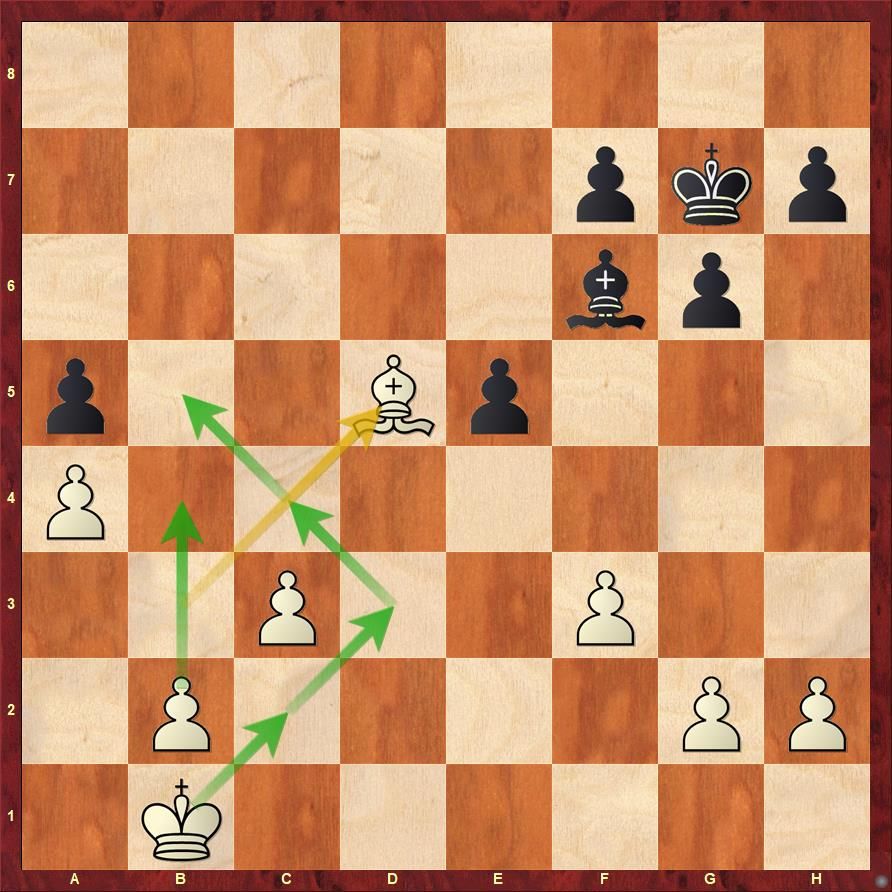 As it turned out, Black played passively and Anand showed good technique by bringing his king to b5 and then pushing his pawn to b4 and winning the game!

Material on Sicilian Dragon in the ChessBase India shop:

Was a lovely experience. Interacting with the children and the school leadership. Its nice to see Sports play an important role in student development.Look forward to tomorrow’s panel discussion #FitIndiaMovement https://t.co/BF4N6qD0BL

You can watch the entire live footage of the event on Doordarshan Girnar YouTube Channel. However, due to some technical issue, the sound hasn't come through.

The opening ceremony for the Sanskardham sports academy will take place on 8th of September 2019, which can viewed LIVE here at 12.30 p.m. Apart from the launch of the academy, it will also see the inauguration of Khel Mahakumbh, a panel discussion and also a pledge by various stakeholders towards the FIT India movement.