Grandmasters Ivan Rozum and Saptarshi Roy lead the 2nd Gujarat International Grandmaster Open after the completion of rounds five and six yesterday here in Ahmedabad. GM Saptarshi defeated Rathnakaran K in the fifth round and drew Rodrigo Vasquez Schroeder in the sixth, while Ivan Rozum beat Maxim Lugovskoy in the sixth round but was held to a draw by Sayantan Das in the fifth. Both Ivan and Saptarshi have 5.5/6 points each and they are being followed closely by nine players who are just half a point behind with 5.0/6. The category B tournament for players rated below 2000 also came to conclusion yesterday with 1818 rated Anurag Jaiswal of West Bengal finishing clear first with 9.0/10 points. In this illustrated report we bring you the latest games, analyses, and much more from the event.

Saptarshi Roy brings down Rathnakaran K with the black pieces!

A match up between the two most aggressive players of the Indian chess community is always a treat to watch. In round five of the 2nd Gujarat Open, Grandmaster Saptarshi Roy (left) was pitted against the man who is dubbed as the Indian Tal, International Master Rathnakaran K | Photo: Lennart Ootes & ChessBase India

The encounter didn't however open with any ultra-sharp aggressive line but rather the calm and positional 4.d3 variation of the Two Knights defense. Rathnakaran had the White pieces but he simply couldn't steer the game into the kind of position he feels comfortable in and on move 17 ended up lashing out a weakening pawn push. Saptarshi immediately took his opportunity to hit the nail on the head and thereafter with almost flawless technique bagged a smooth victory. 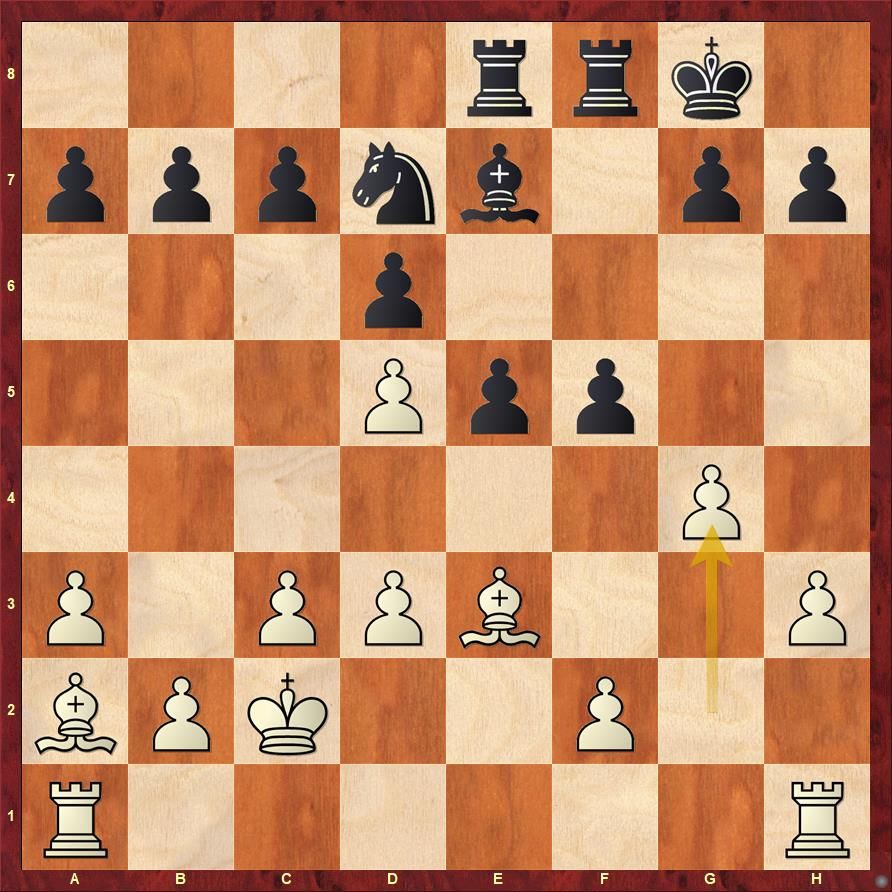 17.g4 was the move that weakened the dark squares on White's kingside. Black at once lodged his bishop on h4 and pushed f5-f4. 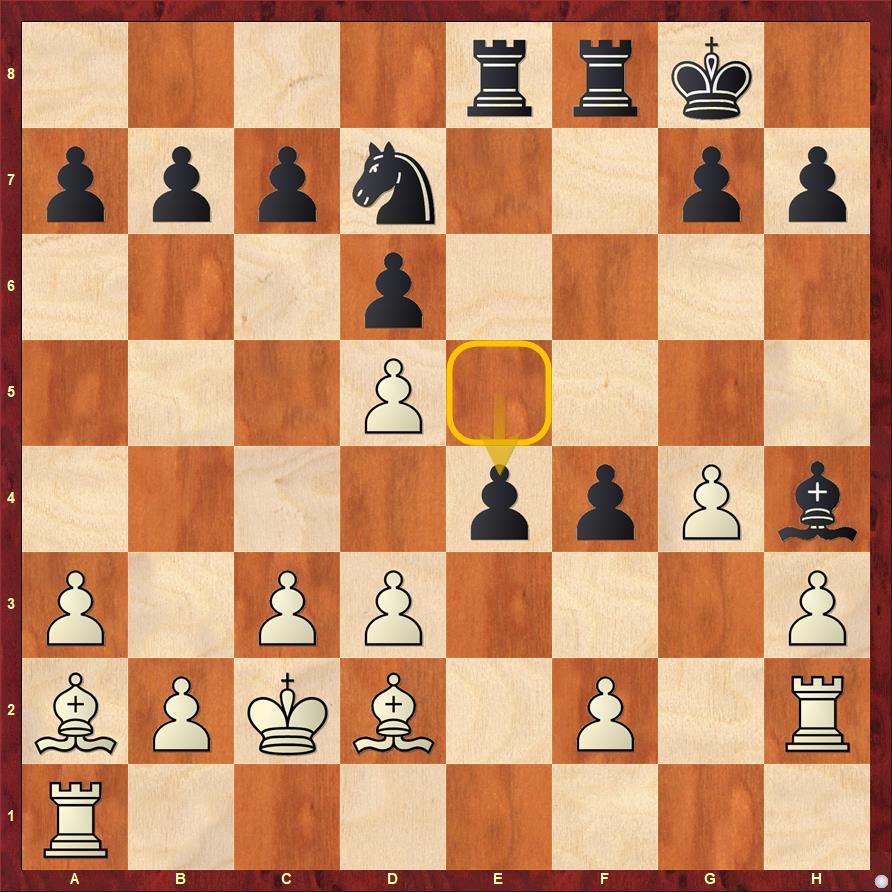 19...e4 next cleared the e5 square for the black knight jump in and also opened up the e-file. 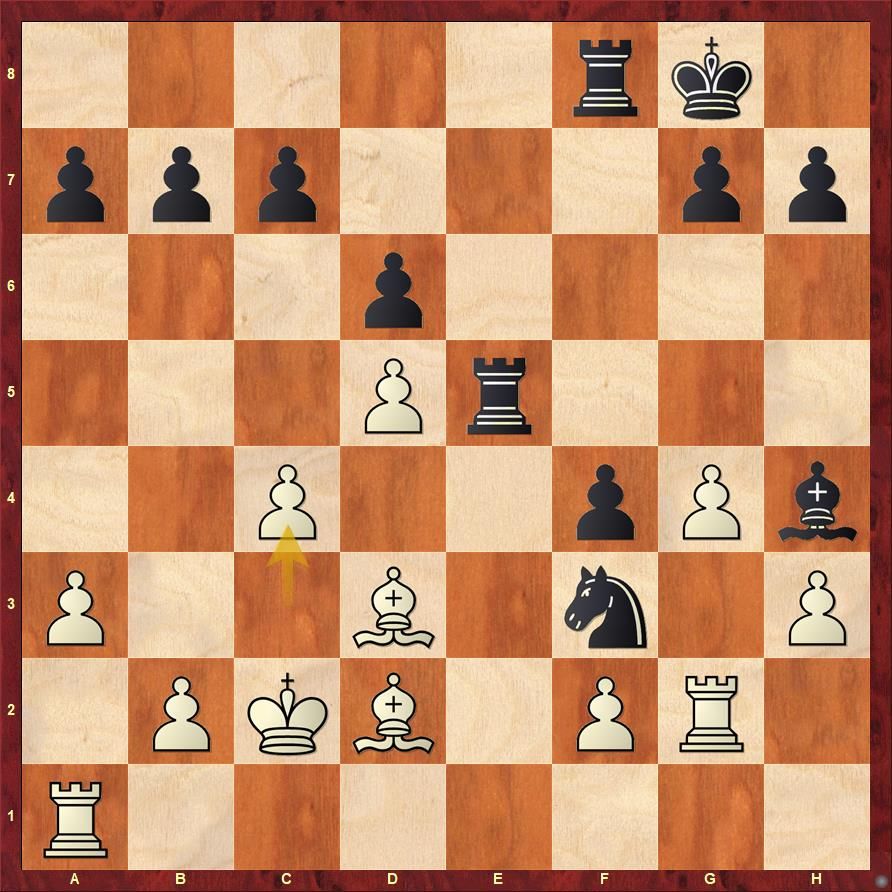 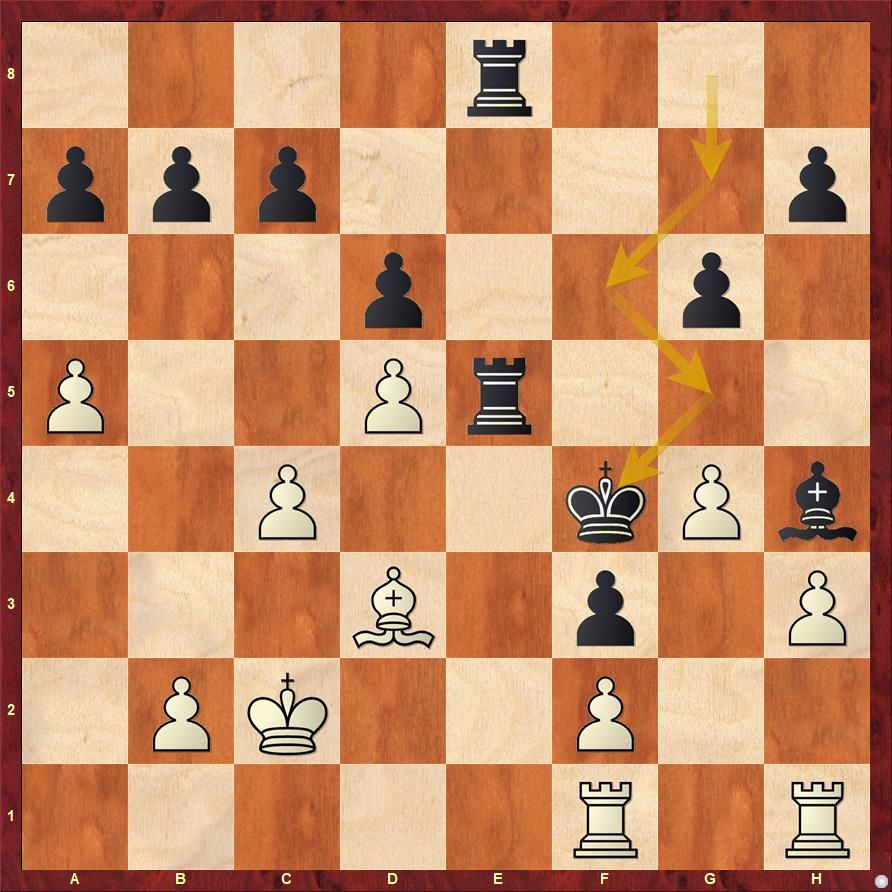 Next step was to bring the king into the foray with Kg7-f6-g5-f4 ... All White could do now was wait and watch his own doom! 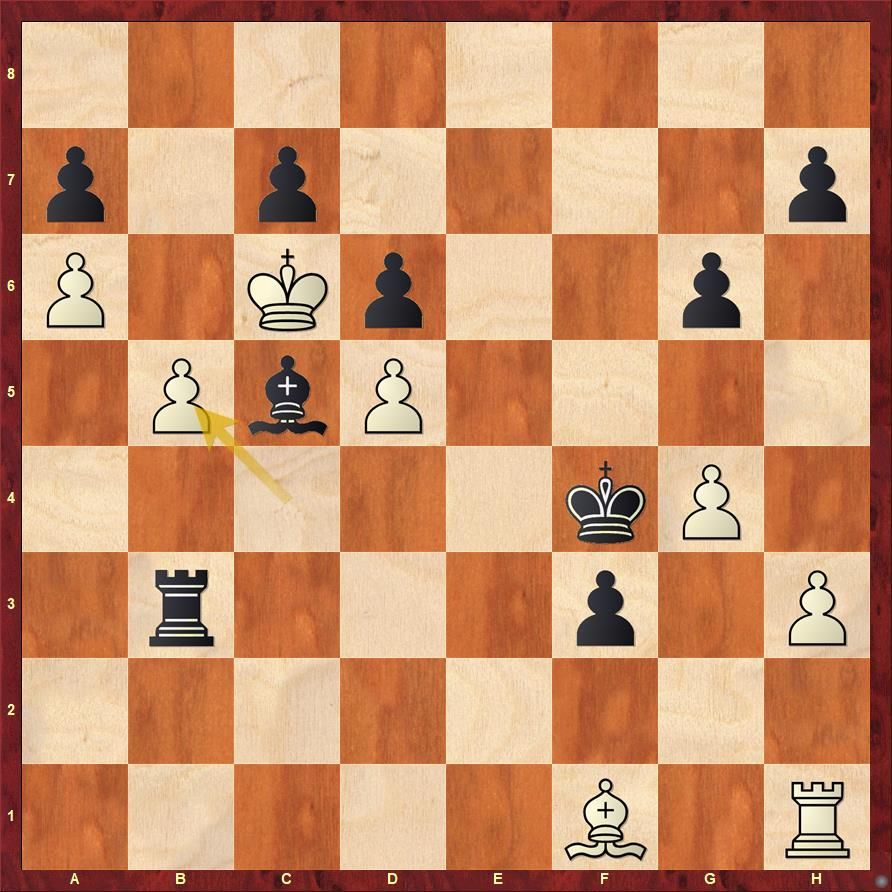 This was the final position on board when White resigned. Clearly after Bb6 and Rb1 there isn't all that much he can do to stop the f-pawn from queening. 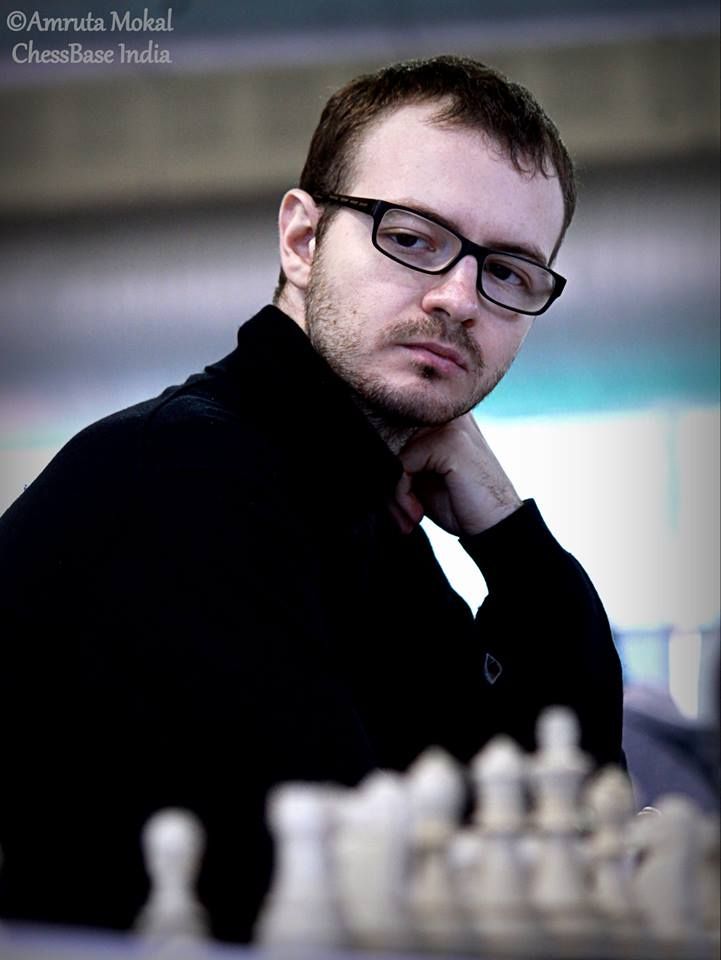 Ivan Rozum beat Maxim Lugovskoy to emerge as one of the two leaders after round six of the event | Photo: Amruta Mokal 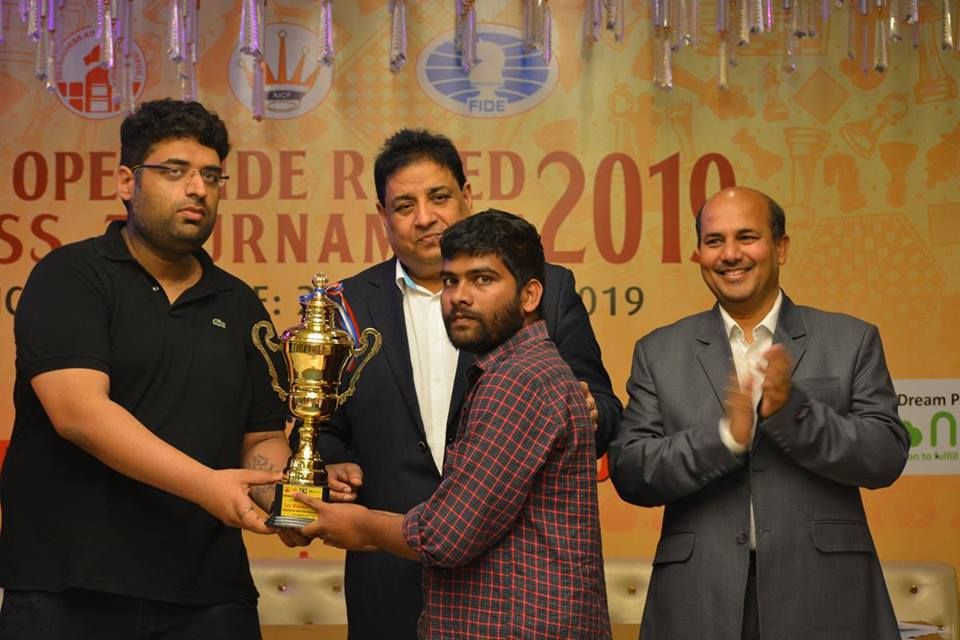 Untitled Bharat Kumar Reddy Poluri beat IM Nikolai Vlassov in round six and drew IM Nguyen Van Huy to stay half a point behind the leaders with 5.0/6. His sixth round victory with black pieces against IM Vlassov is given below | Photo: Rupesh Kumar

Standings after round six

West Bengal's Anurag Jaiswal clinched the below 2000 category event by scoring an unbeaten 9.0/10 points. Nikhil M of Andhra Pradesh finished half a point behind with 8.5/10 to secure sole second spot. Six players followed next with 8.0/10 points among them Raj D Vyas of Gujarat took the third place on the basis of having the best tie-break score. 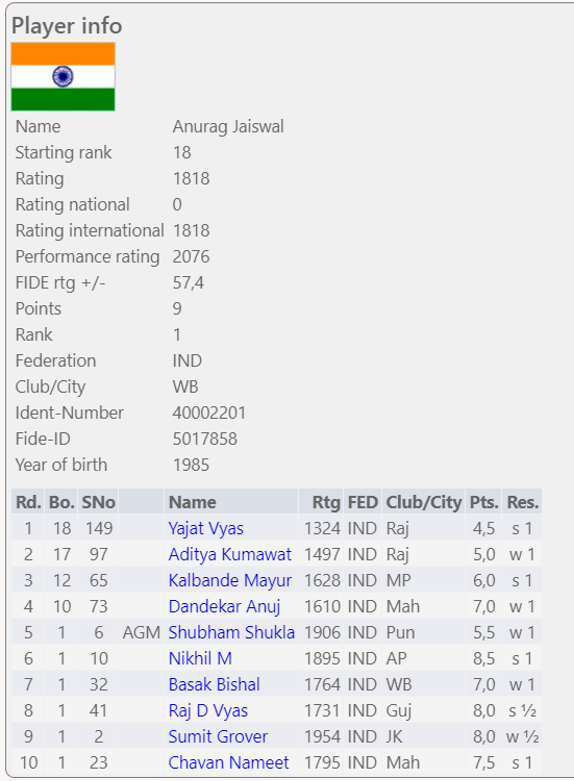 Anurag scored an unbeaten 9.0/10 points to finish clear first in the category B event and gained 57.4 rating points.

Final standings of the category B event after ten rounds