The eighth round encounter between India and the Czech Republic had gone neck to neck until the conclusion of the first two games. On the top board, Vishy Anand was held to a draw by David Navara. Adhiban was the first to finish his game against Zbynek Hracek. The two signed peace in merely 17 moves. Meanwhile, Krishnan Sasikiran showed some fantastic middle game play to bring down Jiri Stocek on board 4 and put his country in the lead. Vidit had the better position but was held to a draw in the end. In the women's group, losses on the first and the third board led to a disastrous loss for India against a lower rated Hungarian team. Round 8 report. | Photo: Niklesh Jain

A tough match awaited team India in the eighth round of the 43rd Chess Olympiad in Batumi, Georgia. They were paired against the Czech Republic, the fifteenth seeded team in the tournament. With David Navara and Viktor Laznicka on the top two boards, the Czech team had done extremely well in the tournament so far. In round five, they had even managed to upset China, the third seed of the tournament, with a dominating 3-1 victory.

As the games began, it was noticed that the Indians had made an important change in their lineup. Harikrishna had been rested for the round. Given Harikrishna’s form thus far, this was hard to foresee. Vidit, therefore, had to fill in on the second board while Adhiban and Sasikiran occupied boards three and four.

Vishy Anand took on David Navara on the top board with the black pieces. Navara opened with 1.c4 and the game immediately entered the waters of the Symmetrical English. For the first eight moves, players followed the moves played in the game between Grigoriy Oparin and Vidit Gujrathi at the Spanish League, earlier this year.

On his 12th move, Anand temporarily gave up a pawn to induce an exchange of queens. After Anand had recovered his pawn, his bishop was trapped behind Navara’s pawns. At the outset, the position looked better for white but Navara had no means of attacking the trapped bishop in time.

Soon, all of the queenside pawns were traded off and the game began to look very drawish. Anand did make some lukewarm efforts to generate play on the queenside but the position was too solid for both sides. On his 29th turn, Anand’s trade of his knight for one of White's bishops alluded to an endgame with bishops of opposite colour. The draw offer that followed was promptly accepted and the game came to a close within 90 minutes. 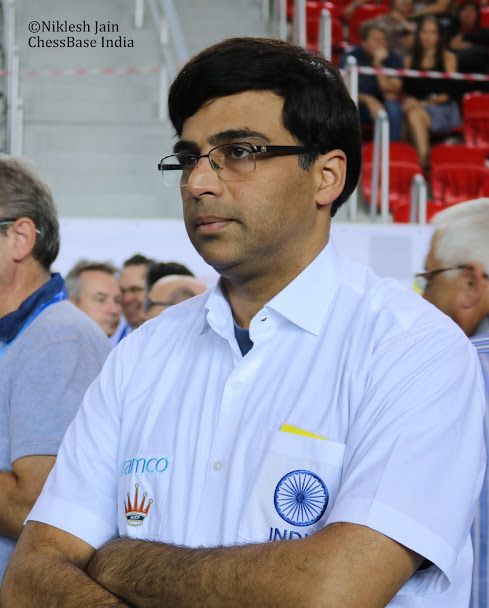 Vishy Anand had no problems holding Navara to a draw in round 8 | Photo: Niklesh Jain

In the meantime, Adhiban Baskaran had already finished his game against Zbynek Hracek. Adhiban’s Caro-Kann Defence had been countered with the Flohr variation by the Hungarian Grandmaster. After both kings had castled on the kingside, Adhiban flung his h-pawn down the board, seemingly, to generate initiative on the kingside.

Hracek uncorked a novelty on his 14th turn. Adhiban continued with his plan creating a queen and bishop battery that threatened a mate in one move. But after Hracek parried the threat, Adhiban simply went back with his queen and repeated moves. A draw was agreed in just 17 moves! 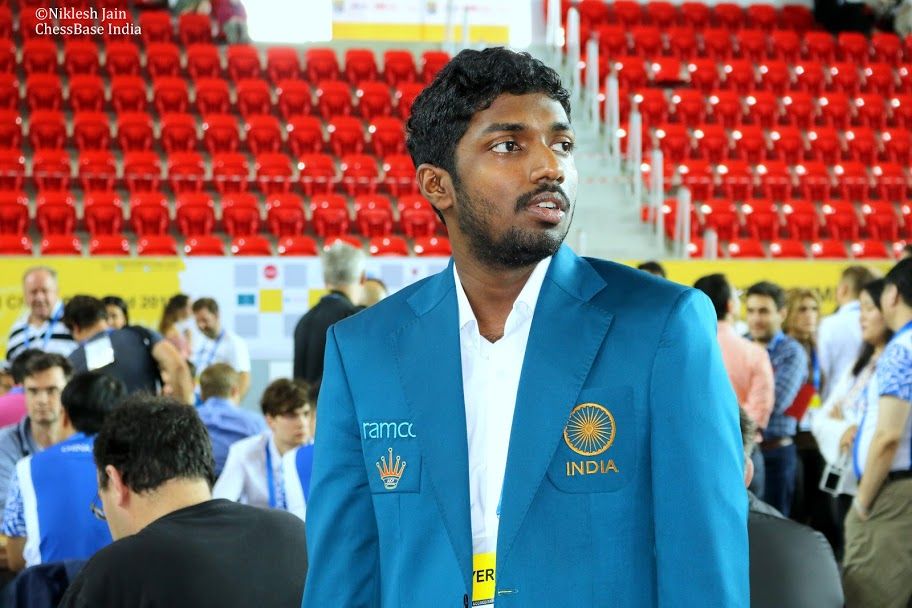 While this could have been a part of the ‘draw with black, win with white’ strategy, it was just uncharacteristic of Adhiban to sign the truce without putting up a fight. But this draw meant that India had secured draws in both of its black games and now the onus was on the players with white to rake full points.

On board 4, Sasikiran had been looking to pounce at any opportunity he could find in his game against Jiri Stocek. Having played all the right moves in the first phase of the game, Sasikiran broke in the centre with his pawns. While this pawn break was an opening novelty, it looked quite thematic for the French Defence. But despite all of this black’s position looked fine.

“f5 is quite a common break in such positions but I had the feeling that after 19…Ne7, he had kind of defended it,” Sasikiran told Sagar Shah after the game.

An important moment came on the 22nd move when Sasikiran managed to bring his bishop – the only inactive piece in his position – into the game. With a two move manoeuvre, Sasikiran had relocated his bishop to pin the black knight to the rook. His doubled rooks on the king bishop file also ensured that the pin would last as they forced the black rook to keep guarding the f7 point.

Although Hracek was struggling after this, he wasn’t lost. But on his 32nd move, he cracked and succumbed to the pressure. His move with the king had allowed Sasikiran to break into the black camp with his rooks. Four moves later, Hracek resigned. 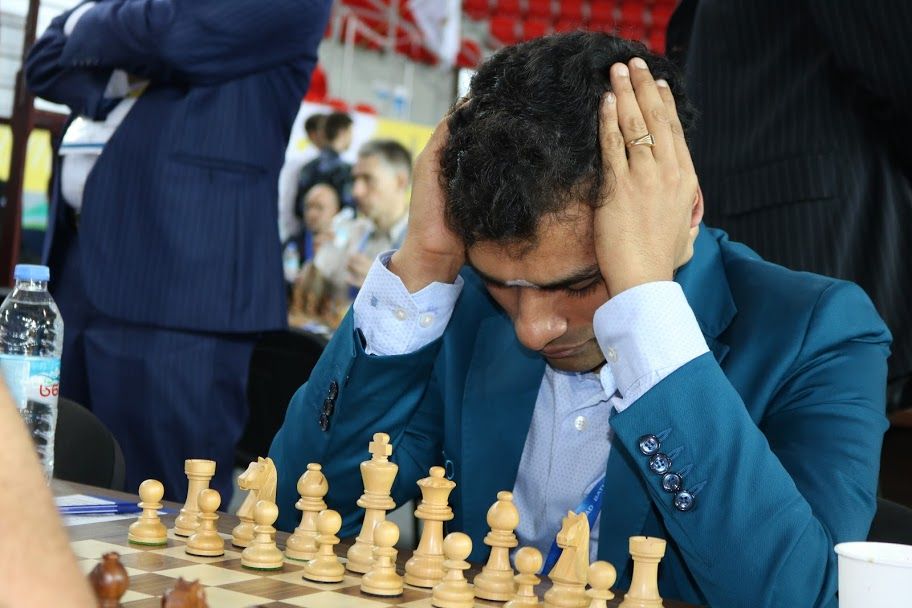 Vidit Gujrathi’s game on board two was the longest. Trailing by a point, the Czechs were in a must-win situation on this board. The Italian Opening had given Vidit very little in terms of advantage but by the time Sasikiran had won his game, Vidit had reached a better position and held good winning chances.

On his 30th turn, Vidit played an interesting pawn sacrifice that gave him the edge. In his follow up, however, he made some inaccuracies. By the 50th move, a more or less equal rook endgame was reached. The game went on for 17 more moves but finished peacefully in the end. 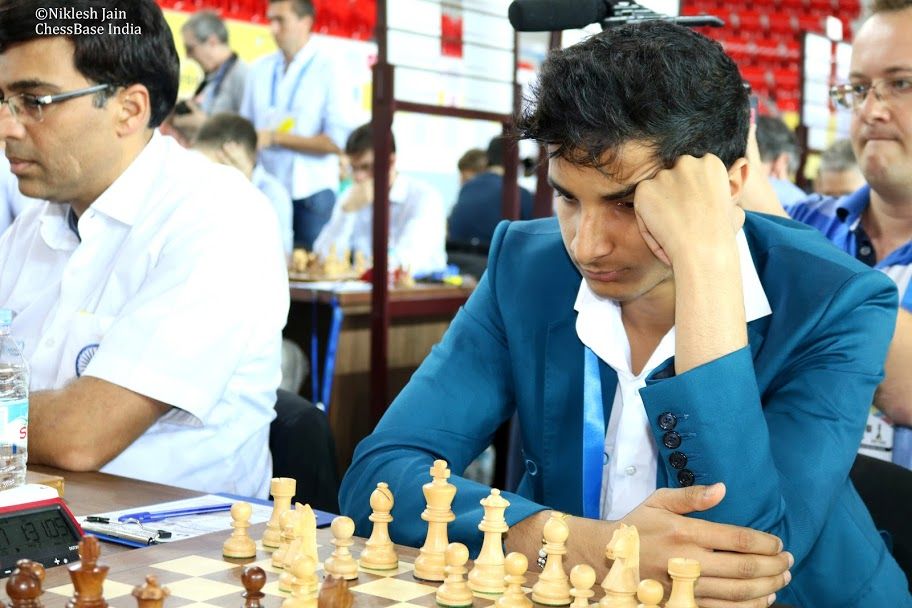 Vidit Gujrathi missed his chance to win against Victor Laznicka and was held to a draw | Photo: Niklesh Jain

While India won with the slimmest possible margin in the open group, the women’s team suffered their first loss of the event against Hungary. After about three hours of play when Eesha Karavade and Harika Dronavalli were held to draws on boards two and four, India suffered a big blow on the top board. Koneru Humpy lost her first game of the event to Hoang Thanh Trang.

In the Colle System, Trang broke open on the kingside very early in the game and went on the offensive. Humpy defended accurately against this and liquidated the position to contain all threats. In the ensuing endgame, Humpy was slightly passive but was still holding ground.

On her 28th move, however, Humpy made another inaccuracy and lost a pawn. The passivity of Humpy’s pieces further deteriorated Humpy’s defensive chances. A few moves later, she lost another pawn and was forced to resign by move 50. 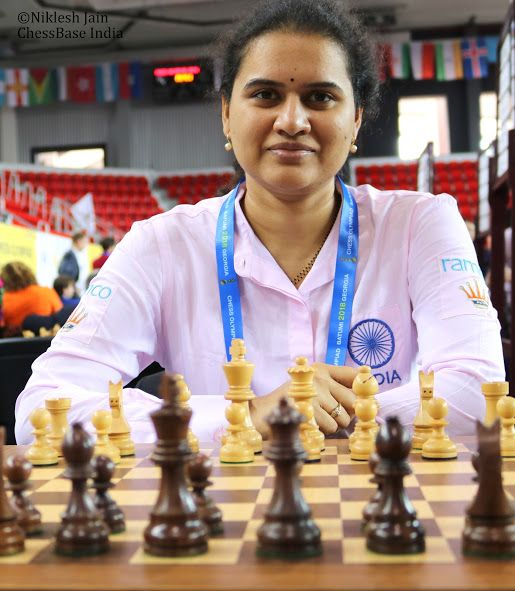 Koneru Humpy had a tough day at the office in the eighth round | Photo: Niklesh Jain

Tania Sachdev was now in a must-win situation in her game against Ticia Gara. Tania had shown tremendous form so far in the tournament, but this time her chances looked bleak. Although Tania had equalized out of the opening, some inaccuracies in the middle game had lost her a pawn. The minor piece endgame hardly allowed Tania anything to create counter chances. After trading one pair of minor pieces, Gara marched her queenside pawns with a decisive effect. Unable to stop the pawns, Tania decided to throw in the towel on move 58. 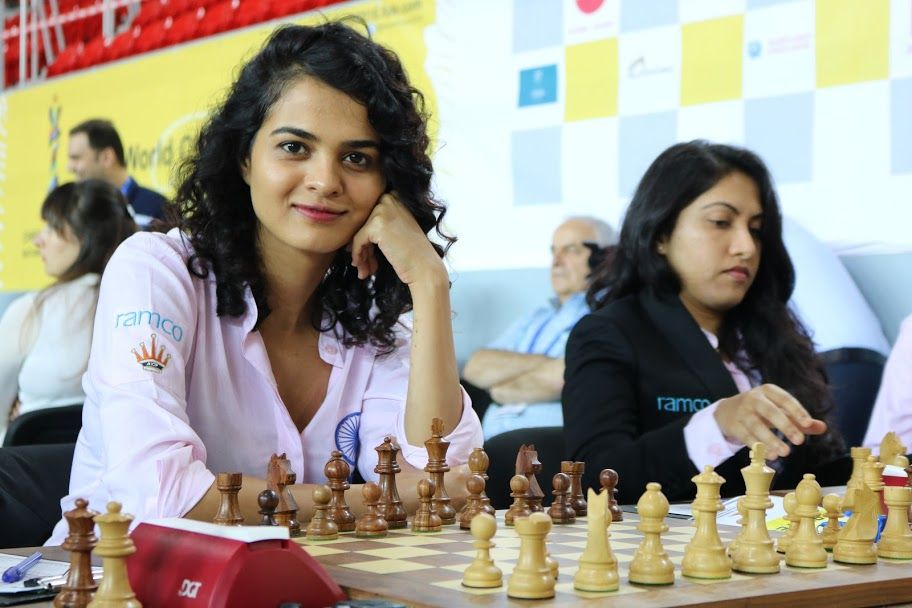 This is a big setback for India. Currently, India is fourth in terms of match points but the tiebreaks have put India on the 14th spot. With such a high number of teams on the same score, the Indian women will have to win all of their remaining three matches to keep up their chances of a podium finish.

The open team, after their win over the Czech Republic, is in the fourth place on the leaderboard. In round 9, India will play the eighth-seeded Armenian team on board three.