How can team India win a medal at the Batumi Olympiad 2018?

It is not straightforward and a lot of results have to go our way, but if they do, then India has a realistic chance of winning a medal at the Batumi Olympiad 2018. India is playing against Poland in the last round and firstly we must win this match. After that we should hope that USA beats China and that the second board match between France and Russia ends in a 2-2 draw. If this happens, then winning a silver is very realistic. But if these results do not happen, then we can still fight for the bronze. In case if USA and China draw the match on top board and France or Russia beat each other, then our chance for the medal is lost. All of this is explained in much better depth in the article. We also explain to you how Sonneborn Berger is calculated so that you can have a better idea of how the tiebreak will work when the match points are the same between two teams.

Indian men's team has a chance for a medal. One cannot really say whether it is an outside chance or a realistic chance because a lot of our chances depends on how other teams perform. Currently these are the standings in the open section.

If the match points are tied then we use the Sonneborn Berger. India has the best tiebreak right now in terms of Sonneborn Berger. In fact our SB is even better than teams like USA and Poland. But the tiebreak is dynamic because a lot of it depends on how our previous opponents perform in the last round.

The crucial pairings of the final round are:

What is the best case scenario for team India?

1. USA beats China. This means that USA secures the gold and China is on 17 points. Well we could also imagine a scenario where China beats USA, but USA has a better tiebreak than China and hence we would be happier if they won.

2. France and Russia match on board two ends in a draw. Both teams end on 17 points.

In such a scenario China, Russia, France and India will all tie on the second spot with 17 points. But we will have the best chance for a silver medal because of a superior tiebreak.

What is the worst case scenario for team India?

1. USA and China draw their match. It means both the teams move to 18 match points and they are out of India's grasp.

2. France beats Russia or Russia beats France which secures a medal for the winning team.

3. India beats Poland but because USA, China, France/Russia are already on 18 points, and we are on 17 we do not win a medal.

As an Indian fan what should you be hoping for?

First of all you should really hope that India beats Poland! Nothing works without this happening!

Ideally we would like Vishy Anand, who is on the top board with the white pieces to fire! He is playing against Duda, who is just 20 years old and has never been in such a pressure situation before. If India can score on board one, we would have great chances. Harikrishna with the black pieces has to remain the Mr. solid as he has been in the past rounds and draw with Wojtaszek with black. On board three we have a big chance as Vidit is definitely a superior player as compared to Piorun and the Indian also has the white pieces. Of course Piorun beat Nakamura in one of the previous rounds and is surely a force of reckon with. Adhiban against Tomczak is something which I am unable to predict. Adhiban with the black pieces would ideally want to play solidly, but that's something that AD doesn't like to do. If he plays in his natural style, it is bound to give Tomczak chances, and the guy has taken them in this tournament. Tomczak has beaten Kramnik here! 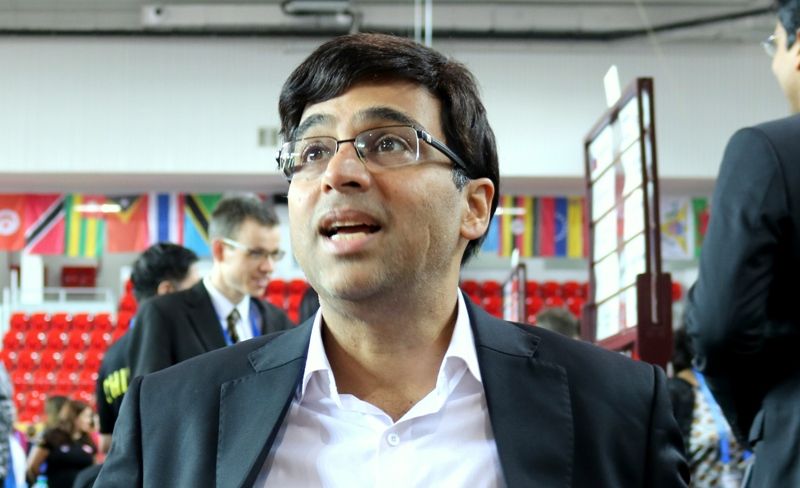 Can Vishy do it for team India? | Photo: Niklesh Jain

Once India wins, you should hope that USA beats China on board one. And you must hope that France versus Russia ends in a draw. If these three things go our way, the medal should be ours. This is also because the teams after us like Armenia, Ukraine, Germany etc. have a low SB score.

How is Sonneborn Berger calculated?

There is a high chance that match points of team India are the same as some other team. In this scene the tiebreak that is being used is not game points, but Sonneborn Berger. I think this is a good idea because if you have played weaker teams, your game points would be most certainly higher, but your SB will be more representative of the strength of your opposing teams.

So how exactly is Sonneborn Berger (SB) calculated?

It's nothing but the number of points you have scored against a team multiplied by their current match points. So India scored 3.5-0.5 victory over El Salvador in round 1. Currently El Salvador's score is 11 match points. So our SB is calculated as 11 x 3.5 = 38.5. You do this for all the teams:

When you understand how SB is calculated you realize why it is important for our opponents of previous rounds to perform well and at the same time why USA must beat China! It helps us in SB because we have played USA and not China! You also realize how dynamic SB calculations are! And hence in case of a tie, you cannot really predict whether we have won a medal or not until all the games are completed!

In the women's section team India is on 10th position and the chances of winning a medal are non existent.