Vidit Gujrathi versus the comedians!

Stand up comedy has become very popular in India recently. There are many artists who have millions of followers as they have their audience in splits with their wittiness and comic timing. But in the lockdown, they do not have many shows to be done. So how do they spend their time? Well turns out that the comedians have taken up chess and developed quite an interesting format. Samay Raina runs a YouTube channel and invites some of his friends to be on his team as they consult on the moves and play against well-known chess personalities. On 14th of April it was India no.2 Vidit Gujrathi who took them on. Read on to find out what happened!

Chess is emerging as the favourite way to spend time in this lockdown - not just for chess players but also for people who always liked the game, but never really found time for it. Now with a lot of time on hand, they have taken up the sport and are finding it to be as engaging and interesting as online video gaming. One such group is that of the well-known Indian comedians. Samay Raina is the host of the show and he invites some of the best Indian comedians and together they take on a well-known personality in the world of chess. On 14th April it was India no.2 GM Vidit Gujrathi who appeared on the show, while a few days ago it was the popular YouTube analyst Antonio Radic, famously known as Agadmator. My interest in these videos was piqued because of Biswa Kalyan Rath, who is one of the members on the team of comedians. I have spent countless hours watching Biswa's humour and consider him to be one of the most brilliant comedians in the country. I was curious to see how he and the other comedians would fare when they started playing and turns out they are much stronger than what I had anticipated! Even Vidit was pleasantly surprised.

To make it challenging Vidit took time handicap. In the first game he began with three minutes and 20 minutes for the comedians. Although when they would get low on time Vidit would generously increase the time. The most interesting thing for the viewer is how these comedians think for their moves. Being not big experts at the sport, but excellent at expressing themselves, watching their thought process and also seeing the humour intertwined in it is great fun. Turns out that they are not just Vishy Anand and Magnus Carlsen fans but also revere Mikhail Tal and Bobby Fischer!

Vidit had made a special request to the comedians to not use swear words during the stream! And they did respect that! :)

Perhaps the best game of the day. Vidit was made to stretch for the full point. Three minutes is quite a lot for the India no.2 but the comedians repeatedly found the best moves in the position and at one point they were even very close to equalizing deep in the endgame. Vidit had to show his high level endgame technique to bring out the final error and win the game.

Vidit next decided to take just one minute against unlimited time for the comedians. Vidit always had the advantage, but the material was even. The critical error came on move 18. 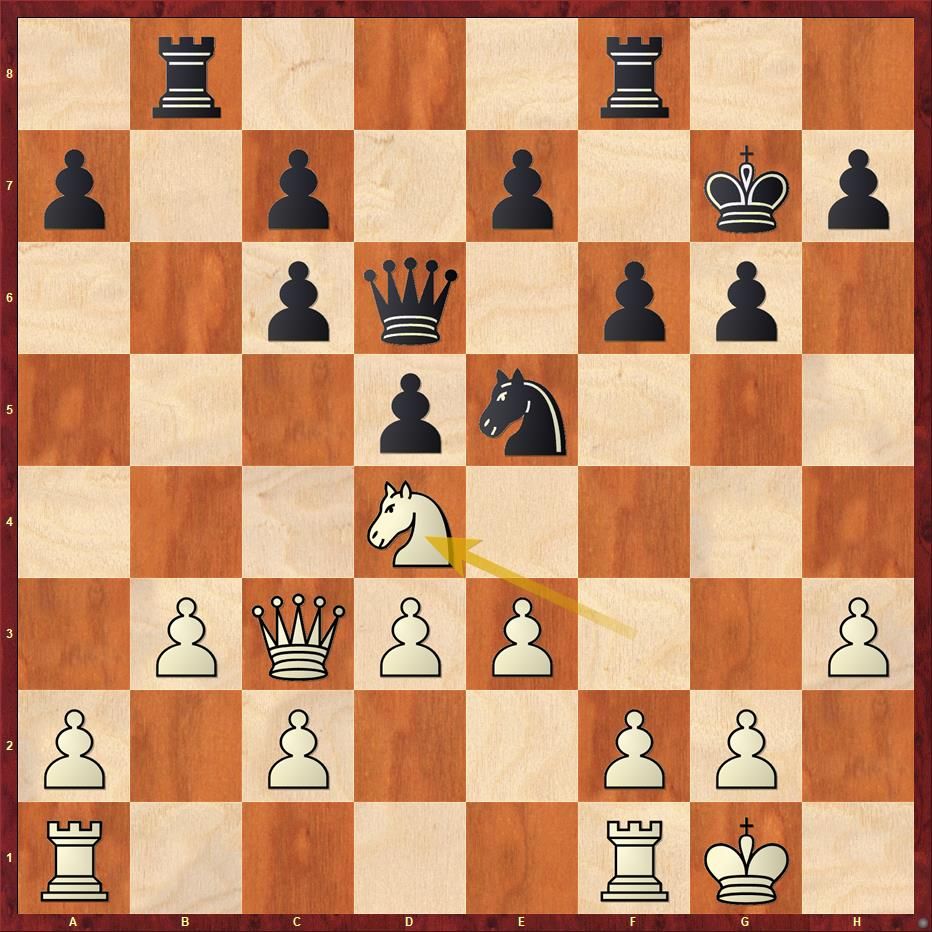 Black can hold on here with Rb6. But they played ...c5. Can you see why that is a mistake?

Vidit is not one to miss out on such tactics. He took on c5 with his queen and then forked his opponent with Ne6 to take home the full point!

Speaking to ChessBase India Vidit said, "I enjoyed every bit of my time with Samay, Biswa, Vaibhav and Abhishek. I was pleasantly surprised with their chess knowledge and skills. In fact they would begin discussing a position with a wrong move, but then one of them would spot the error in the calculation, correct it and then come to a fine choice! I definitely didn't have it easy." Vidit also thinks that chess as a sport is a perfect one to be played during lockdown. "Chess is a game of strategy and planning and I think it is a perfect one to indulge in during the lockdown. Many people feel that chess is slow and boring. It might look like that for an outsider, but once you get engrossed in the game, you know how thrilling it is! Ask the team of comedians, they will tell you! (smiles)"

Agadmator has the most popular YouTube channel with close to 600,000 subscribers. He took on the team of comedians and quite surprisingly it was the comedians who won the game.

We hope that these chess bouts of comedians versus the chess personalities continue! Who do you think should feature on their show next? Let us know in the comments section below.