Carlsen-Nakamura finals will be epic - anyone could have guessed that but one thing very few could guess correctly would be how epic would it be or if it would go down to Armageddon. Carlsen won the Magnus Carlsen Chess Tour in a fantastic manner. The finals witnessed back and forth games and there were zero short draws. Both players knew that they would have to push their limits and drive things in a top gear, anything less will just not be enough. The entire chess universe was buzzing about this epic finals and the World champion surely had a successful tour in all stretch of the imagination - as a player, organizer and promoter of the game. Chess is definitely booming in this online era and Magnus Carlsen is definitely playing a pivotal role in it. Photo: Amruta Mokal

Carlsen gets his Armageddon revenge in the end

Carlsen started the final day of Magnus Carlsen Chess Tour Finals with a win. The second game of the day had a well contested prolonged draw. Nakamura bounced back in the third game and equalized the score with a victory. Fourth game was another hard fought draw. Nakamura won the fifth game putting the World champion in a must-win situation. Carlsen managed to win the sixth and final blitz game forcing the finals to go to Armageddon. In a battle of equals, the game ended up in a draw as Carlsen held an impenetrable fortress. However, as per Armageddon rules, Carlsen won the Armageddon, set and finals. Thus becoming the champion in what will go down in history as one of the most epic finals in online chess and arguably overall chess history too. 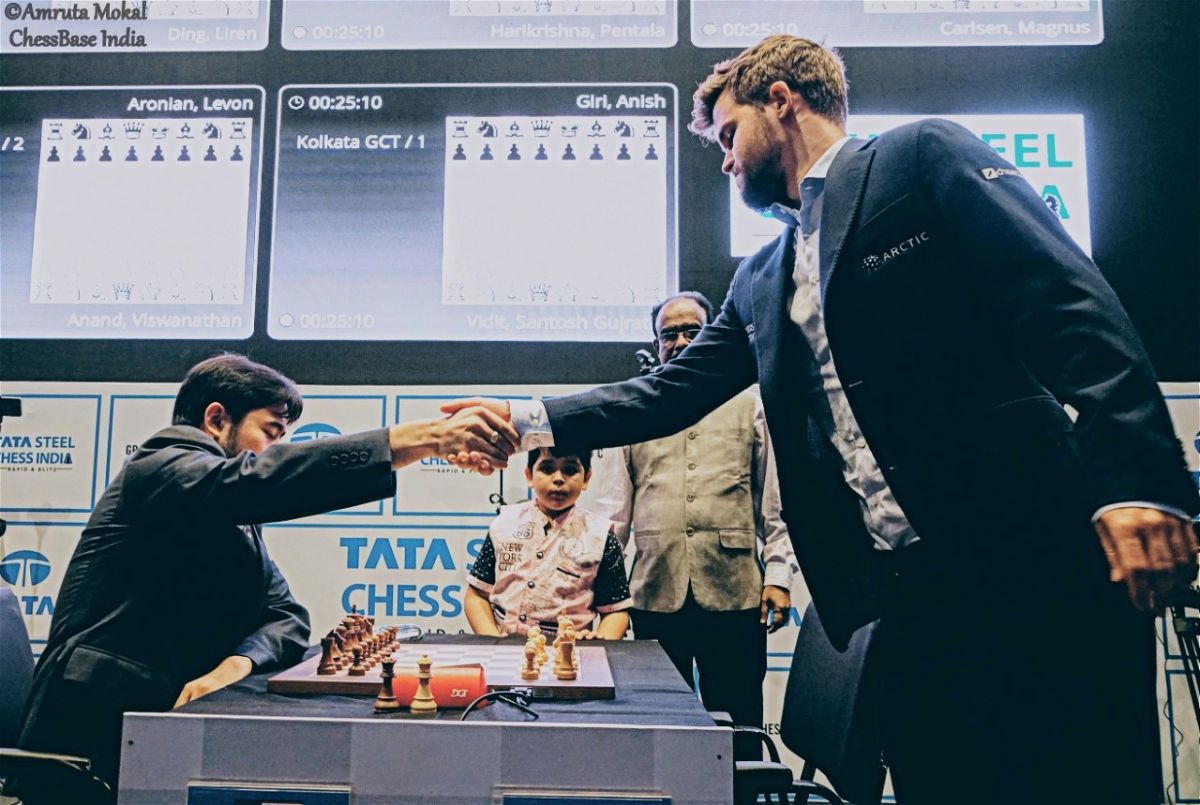 In the first game of the day, Nakamura lost a couple of pawns in the middle game. He sacrificed a knight in an already difficult position which didn't help the situation and eventually lost the game in another 15 moves. 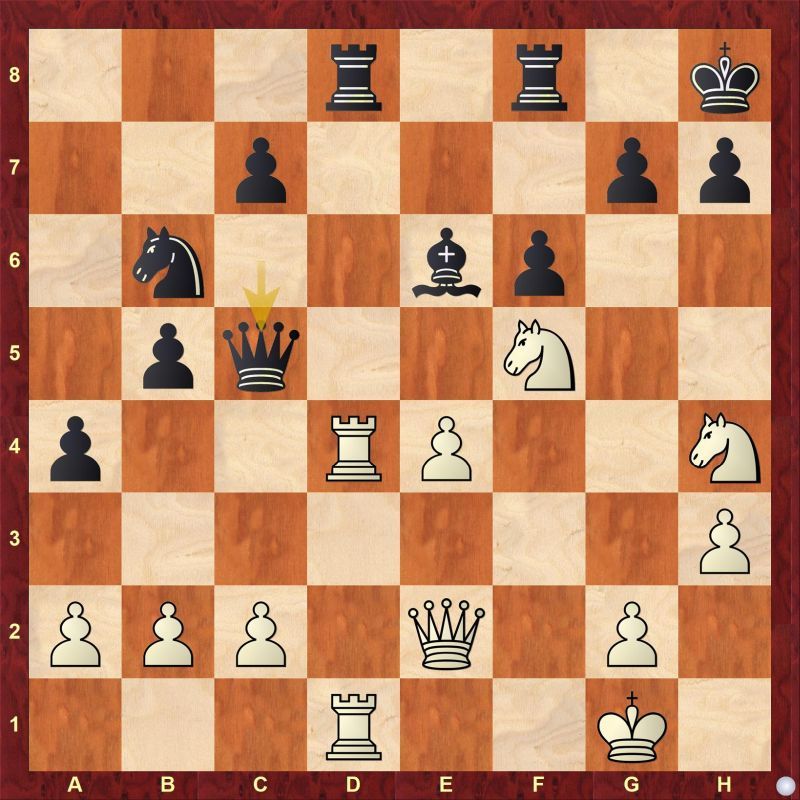 The game continued with 23.Qf2 and black picked up the pawn with 23...Rxd4 24.Nxd4 Bxa2. What was the better continuation for white instead? 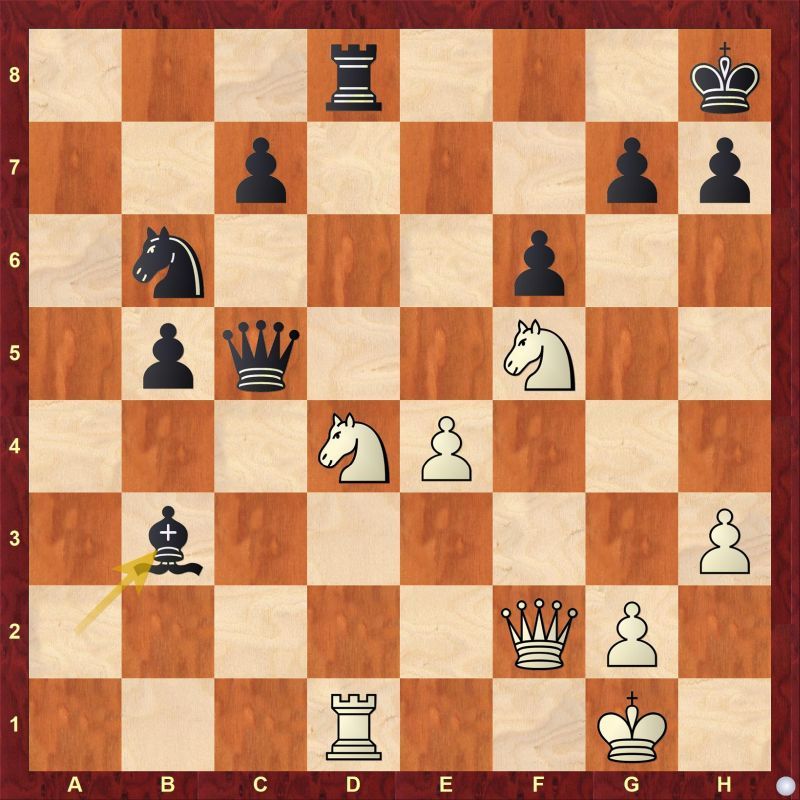 Nakamura sacrificed his knight with 27.Nxg7, unlike Carlsen's sacrifice of Nxg7 on the previous day's first game, this time it didn't work.

The second game of the day seemed equal throughout the game but Carlsen kept pushing for a win but in the end draw was the only obvious result. 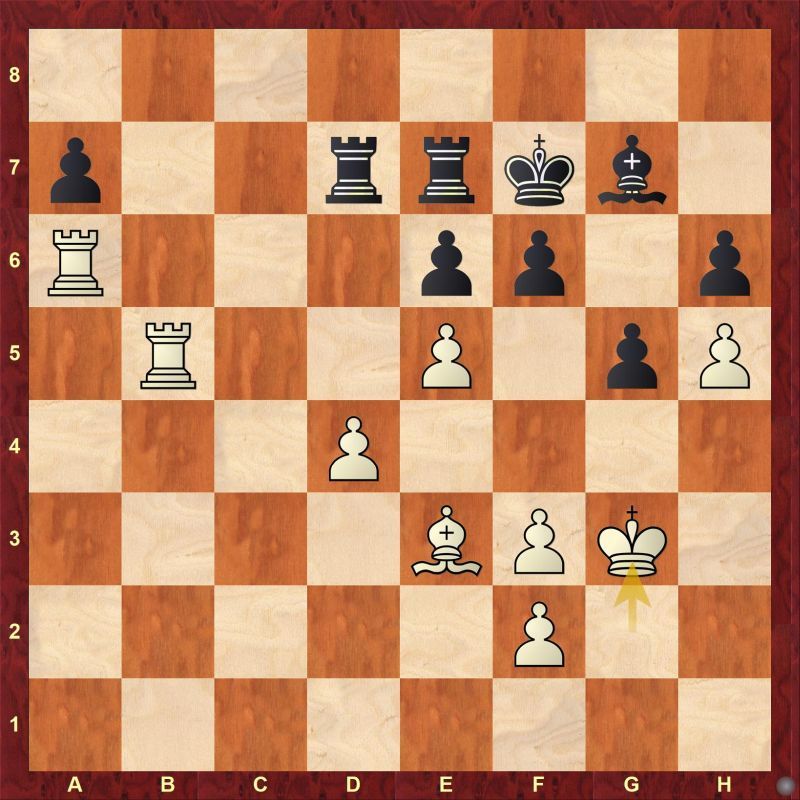 White could have played 33.Rba5 instead but it wouldn't have changed the outcome of the game.

Nakamura was determined to win the third game of the day and he deviated from the first game in Berlin and went with 9.g4. 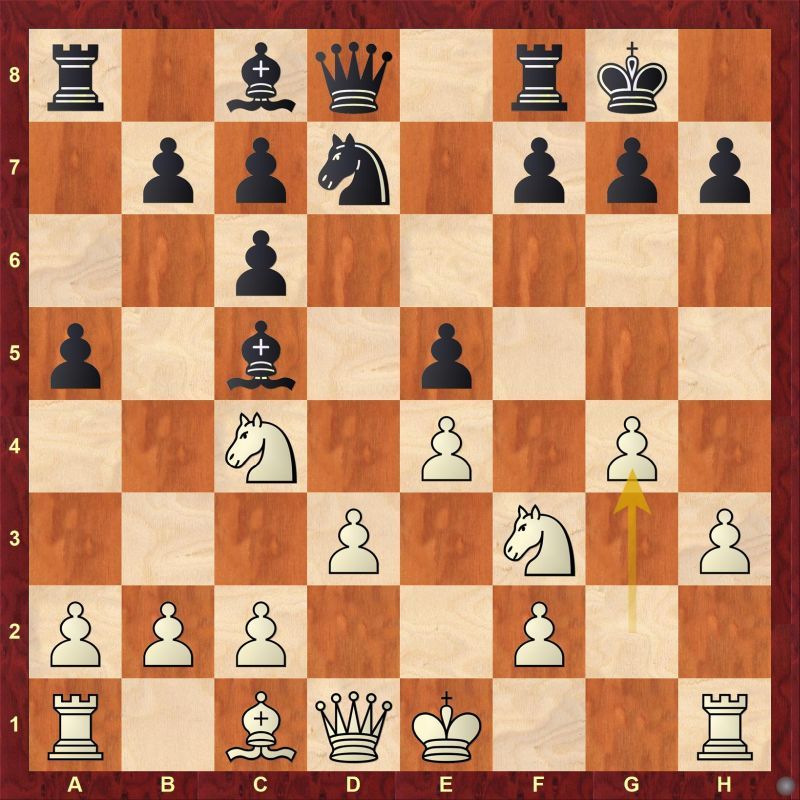 It is evident that Nakamura does not to want to go for anything less than a win. 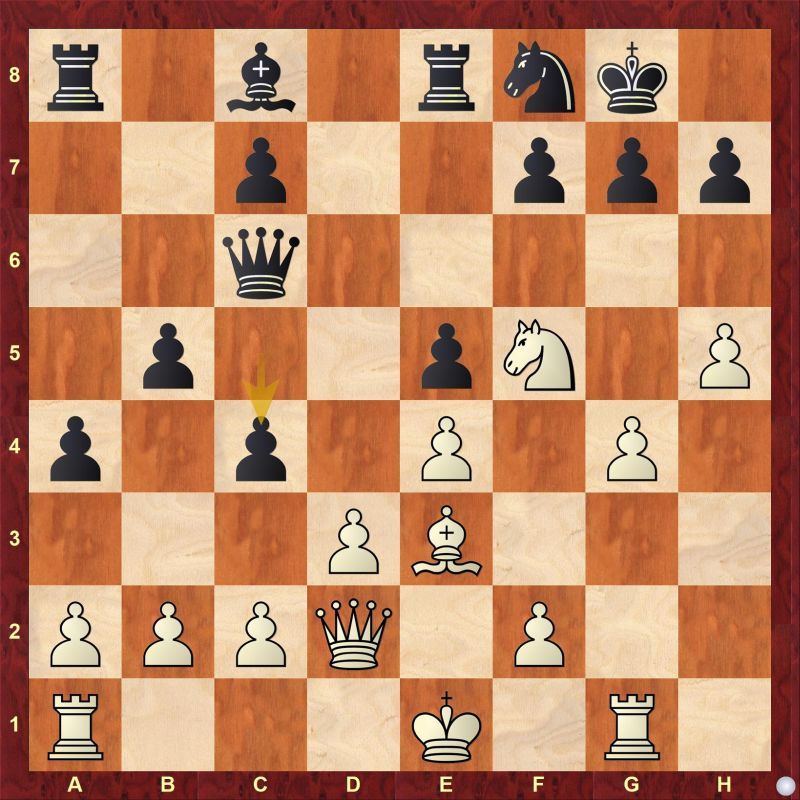 Carlsen played a strange move 17...c4 which allowed white to launch an attack. Find out what black should have played instead. 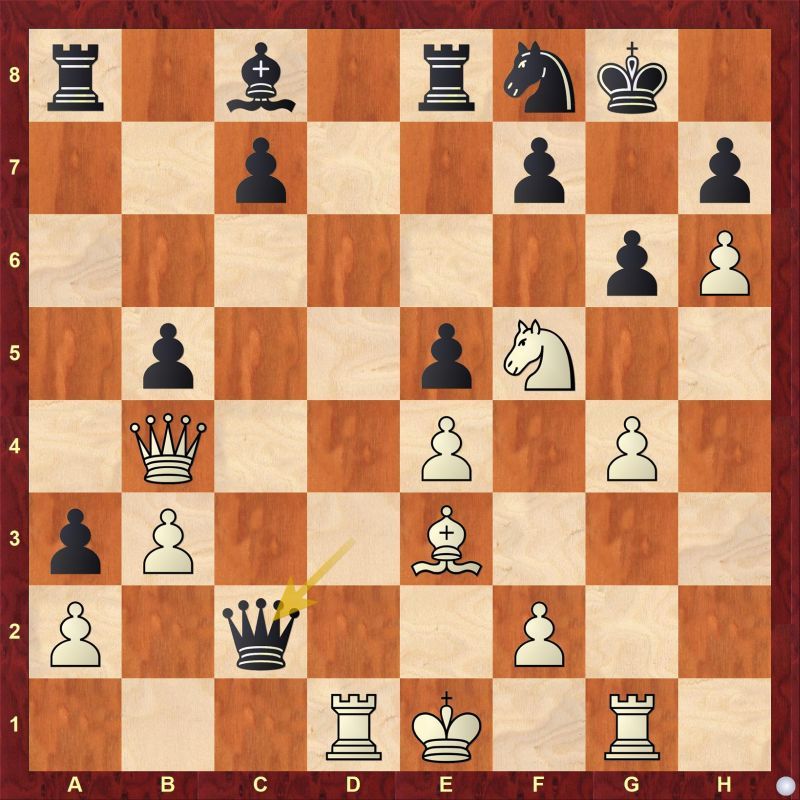 The game continued with 24.Ng7 but what was the better continuation for white here?

The fourth game of the day was also another hard fought draw. Neither player could create enough trouble for their opponent. Nakamura scored a fantastic victory in the fifth game, putting Carlsen in a must-win situation to force Armageddon. 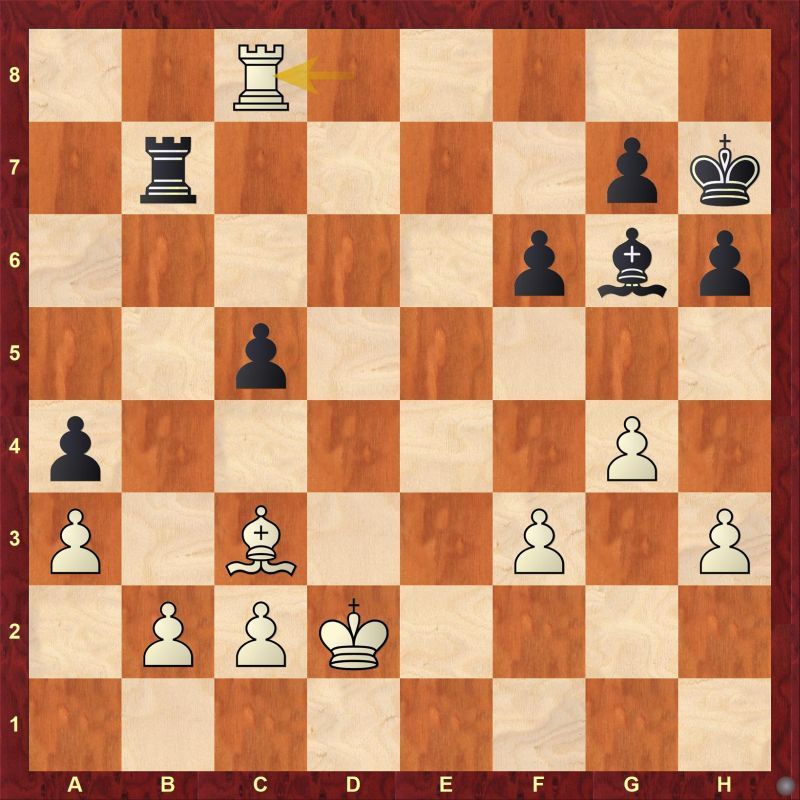 White had no difficulty converting his advantage into a win.

Carlsen scored a win on demand in the final blitz game to force Armageddon against Nakamura. 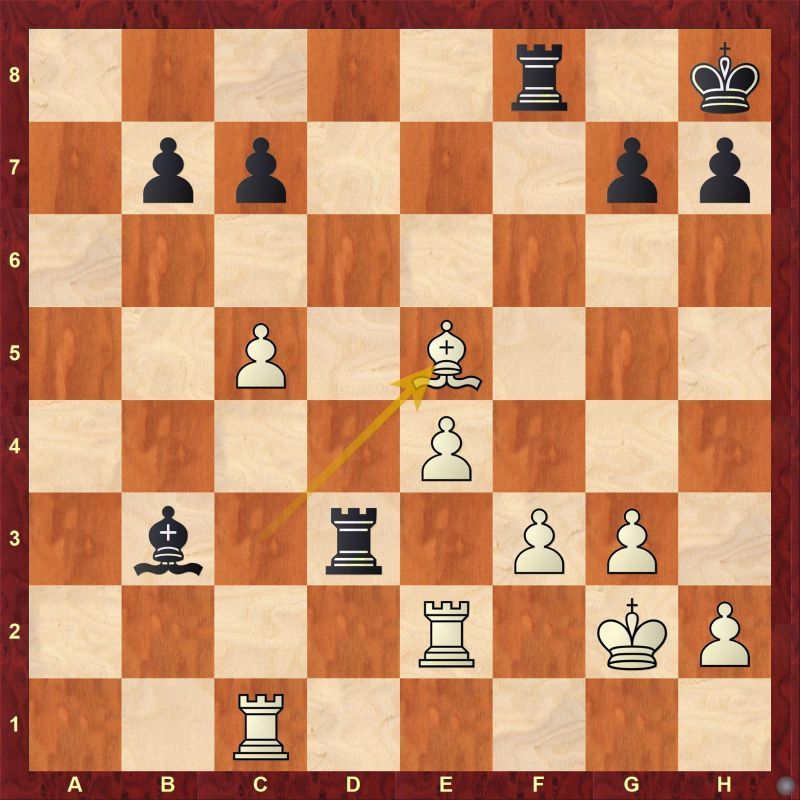 The game continued with 34...Rdxf3 and black made another mistake in the next move. But before that, things were not bad for black. In fact, black can still make sure that things don't go out of hand. Find out black's best response to 34.Bxe5

Carlsen opted for the black pieces and drew the Armageddon to win Magnus Carlsen Chess Tour Finals. The entire finals and the tour has been extraordinary. These are some of the tweets chess universe made about the finals and the entire tour.

This is what Carlsen tweeted after winning the tour

Nakamura analyzed his final day games on his twitch channel and also tweeted this, congratulating the World champion

Carlsen replied with very nice things to say about him

Nakamura shared this photo on his twitter and ig with the caption: Time to relax | Photo: Nakamura's twitter

The finals have been nothing short of epic | Photo: chess24 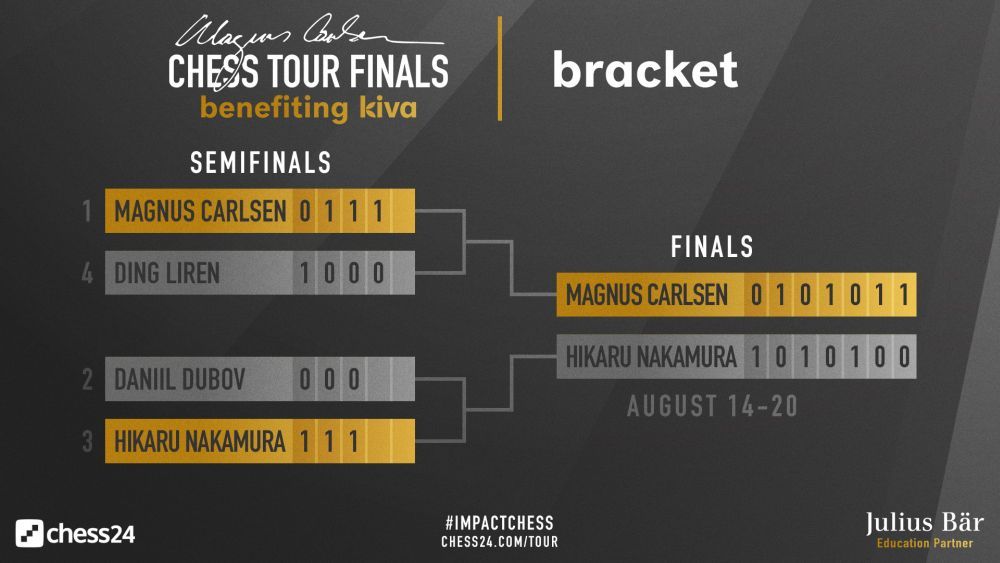