Starting out as the top seed, Manigandan S S scored an unbeaten 7.5/8. He finished a half point ahead of the field to win 31st CUSAT Rating Open 2022. Four players scored 7/8 each. They are - Arpith S Bijoy, Goutham Krishna H, Mithun Anand V and Abdallah M Nistar. 13-year-old Arpith and the reigning National Under-12 Open champion, Goutham were placed second and third respectively according to tie-breaks. Total prize fund of the tournament was ₹300000. Top three prizes were ₹30000, ₹25000 and ₹20000 along with a trophy each. The tournament was held between 26th and 29th May 2022 at CUSAT Campus. Photo: IA T Vinoth Kumar

Two out of the top three places were claimed by strong kids from the home state, Kerala. While 13-year-old Arpith secured second place, 11-year-old Goutham was placed third according to the tie-breaks. Another teenager, 13-year-old Aswath S scored 6.5/8 to make a top 10 finish at seventh place. Kerala's very own Anilkumar O T was the sole veteran (Above 50) to make it in the top 10. He scored 6.5/8 to finish sixth. The tournament returned after a two-year hiatus due to Covid-19 pandemic. The previous edition was won by Ilamparthi A R in 2019. 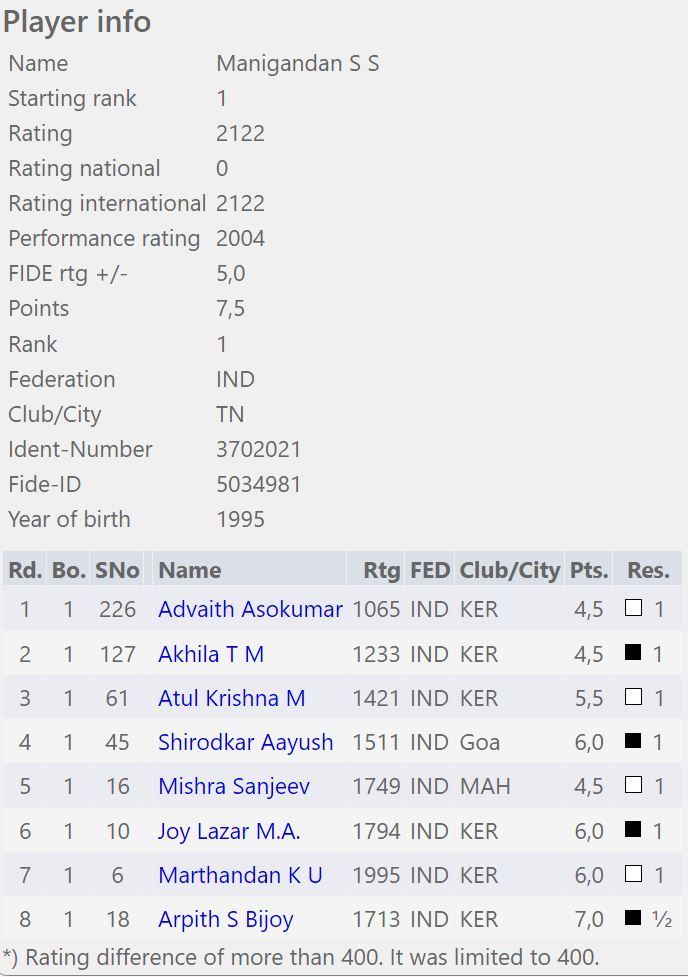 A total of 446 players took part in this four-day Classical Rating tournament. The event was organized by Department of Physical Education, CUSAT and CUSAT Chess Club at CUSAT Campus, Cochi, Kerala from 26th to 22nd May 2022. The time control of the event was 90 minutes + 30 seconds increment.